Below are many steam locomotive terms that broadly cover steam driven motive power, highlighting everything from different types to specific functions of various locomotive parts. Also, if you have any questions about the meanings of any of these definitions or simply have more to add that are not covered here please do not hesitate to get in touch with me. Lastly, I do hope that the below terms and meanings are of help and beneficial use to you, as that is the main reason for providing the information presented here!

All-weather cab: A steam locomotive cab enclosed at the rear to provide the crew with protection from harsh weather. Also called vestibule cabs.

Articulated: A steam locomotive with two sets of driving wheels under a single boiler. Articulated locomotives have wheels arrangements such as 2-8-8-4 or 4-6-6-4. Articulated rolling stock, such as certain types of passenger cars and double-stack cars, share trucks between adjacent car bodies.

Backhead: The rear of a steam locomotive's firebox; located in the cab, it's where many of the locomotive's controls are mounted. 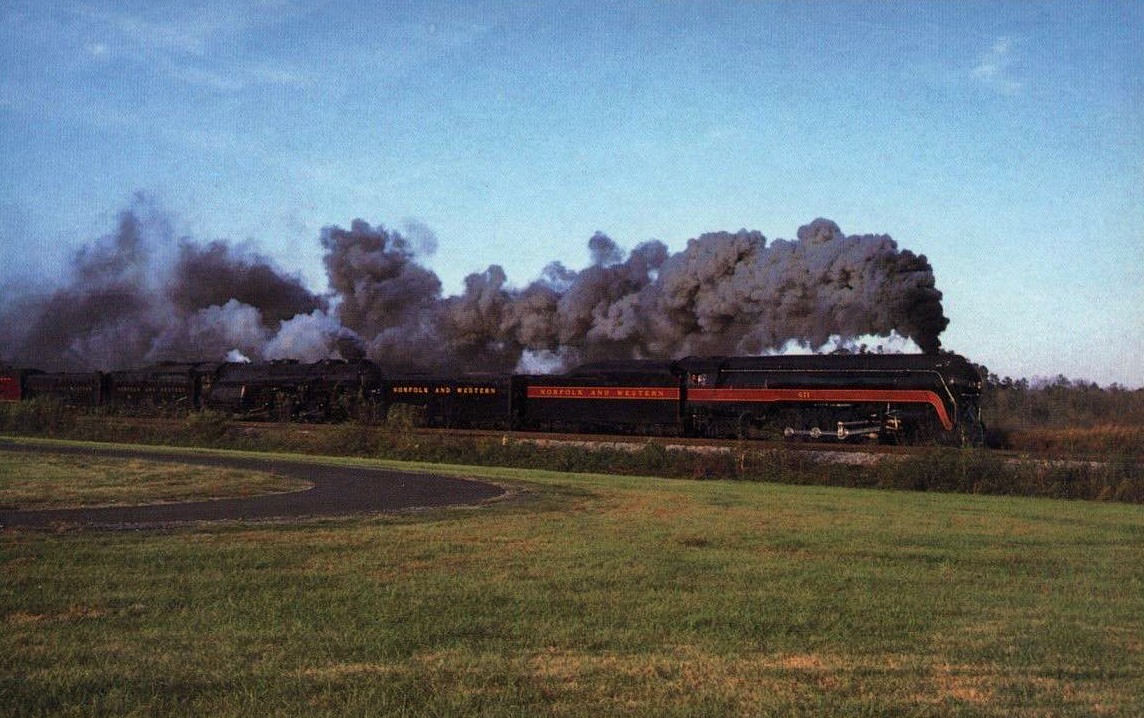 Camelback: A steam locomotive built through 1927, with the engineer's cab setting astride the middle of the boiler rather than at the rear. A small overhang remained at the rear for the fireman stoking the wide anthracite-burning firebox.

Climax: Type of geared steam locomotive built by the Climax Manufacturing Company featuring a pair of inclined cylinders just behind the smokebox driving a transverse shaft which was geared to a central longitudinal driveshaft that in turn drove all the axles through skew bevel gears.

Compound: A type of steam locomotive that takes the steam after it has partly expanded in one cylinder and pipes it to another cylinder, where it further expands and pushes another piston, before being exhausted out of the smokestack.

Connecting rod: Perhaps the one single component of a steam locomotive that makes it so fascinating it is the large steel arm that transfers motion from the piston to the driving wheels.

Cylinder cocks: Opening on a steam locomotive's cylinders that allow for access water to be released, which condenses in the cylinders when the locomotive is not moving.

Decapod: A 2-10-0 arrangement of a steam locomotive type.

Displacement: The volume displaced by a complete stroke of the piston.

Doghouse: Nickname for the shelter placed on the tender deck of steam locomotives to house the head brakeman.

Duplex-drive: A non-articulated steam locomotive with two sets of cylinders and drive wheels.

Feedwater heater: In a steam locomotive, a device that pre-heats water from the tender as it is fed into the boiler to make steam.

Heisler: Type of geared steam locomotive built by the Heisler Locomotive Works featuring two cylinders arranged in a "V" under the boiler driving a central longitudinal shaft gear to the outer axle of each truck. Side rods connected the outer and inner axles.

Injector: Device for adding water to a steam locomotive boiler. 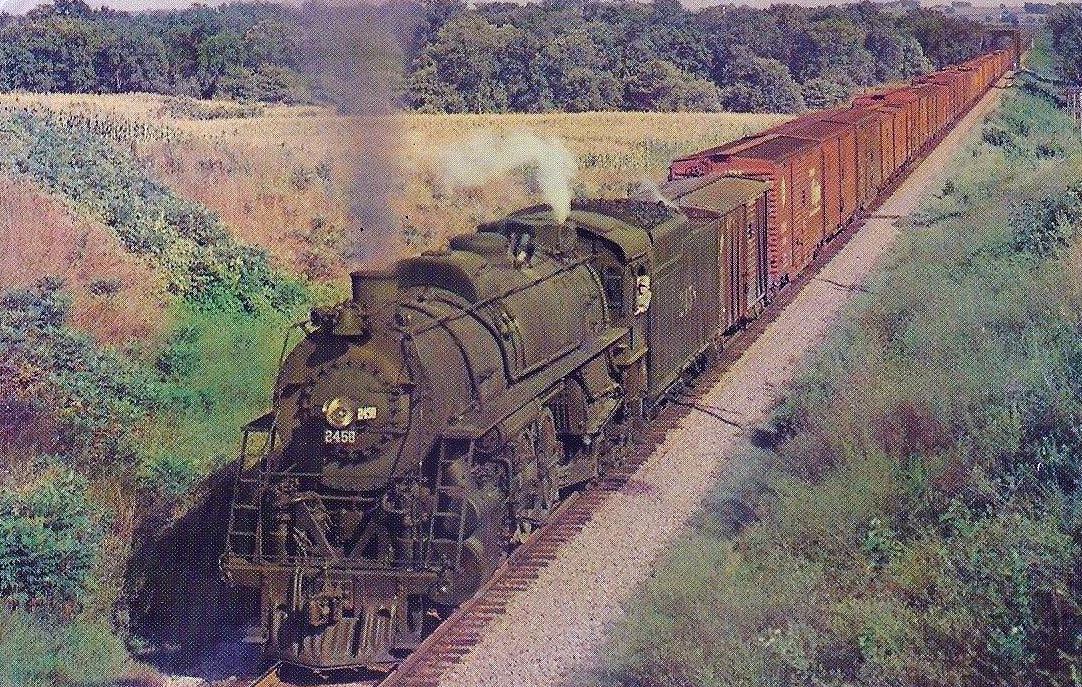 Jawn Henry: Experimental coal-fired steam turbine locomotive, built in 1954 by Baldwin-Westinghouse for the Norfolk & Western Railway. The locomotive weighed some 409 tons, was rated at 4,500 horsepower, produced 199,000 pounds of tractive effort, and could haul more tonnage on less fuel than convention steam engines, but at lower speeds. The engine was scrapped in 1957.

MacArthur engine: Redesignated name for the Mikado-type (2-8-2) steam locomotives in honor of General Douglas MacArthur. The locomotive was used by a handful of railroads during World War II.

Mallet: A type of articulated compound steam locomotive with two sets of cylinders, rods, and drive wheels under one boiler. The non-swiveling rear engine works at boiler pressure, and the swiveling front engine uses exhaust steam from the rear engine. Developed by Swiss inventor Anatole Mallet (mal-LAY, but often pronounced MAL-ley in the U.S.), this type of locomotive was substantially bigger than its predecessors, and was popular between roughly 1905-1925.

Pop valve: The safety or pressure release valve on a steam locomotive boiler.

Radius rod: On a steam locomotive, the small rod that transfers motion from the valve gear mechanism to the valve rod.

Saddle-tank: A steam locomotive which carries its water supply in a tank which straddles the boiler.

Shay: Type of geared steam locomotive desinged by Ephraim Shay and built by the Lima Locomotive Works. The most common of the geared steam engines, it featured a set of vertical cylinders on the right of a boiler offset to the left. The cylinders drove a longitudinal shaft that drove the axles through bevel gears.

Smoke deflector: An object placed on both sides of a steam locomotive's boiler near the smokestack that would create air currents to lift the smoke above the boiler. The purpose of the deflector was to increase the crew's visibility and keep smoke out of the cab.

Superheater: A series of coils containing freshly created steam that pass through flue gasses to increase the temperature of the steam and make it more powerful. Once steam has passed through superheater coils, it adds 25 to 30 percent more power to an engine. 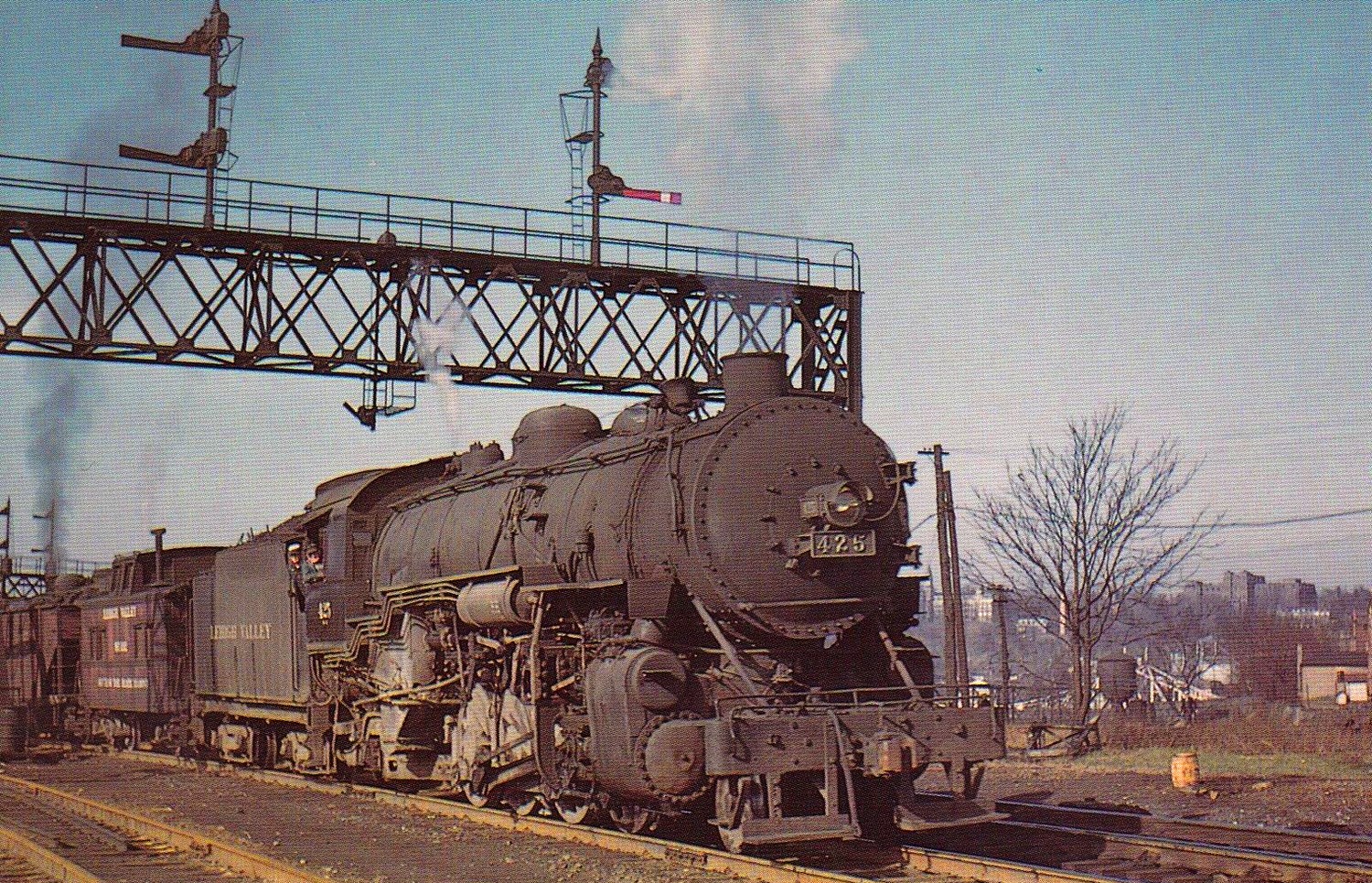 Thermic syphon: In a steam locomotive firebox, a funnel-shaped steel fabrication that connects the bottom of the throat sheet and the crown sheet. Water flows upward through the syphon, connecting the coolest and hottest parts of the locomotive boiler. Syphons improved water circulation in the boiler and insured more uniform temperatures in the boiler, increasing fuel efficiency.

Three-cylinder steam locomotive: A steam locomotive containing a third cylinder located under the smokebox between the two outside cylinders. It transmitted power to the driving wheels by means of a main rod which was connected to the center of a specifically designed crank axle.

Water glass: Device in the cab of a steam locomotive by which the water level in the boiler may be monitored by the engine crew. Indicates the depth that water is covering the boiler crownsheet, as it should be to prevent an explosion.