If you are interested in Georgia railroad jobs the state is home to several companies outside of Class Is CSX and Norfolk Southern.

Furthermore, if you land a position within the state you can at least expect mild/warm temperatures year-round due to Georgia's near sub-tropical climate.

While the big players make up most of the state's rail network (around 70%) there also nearly two-dozen short lines operating there as well including historic lines like the St. Marys Railroad and Sandersville Railroad.

Amtrak, the nation's passenger rail carrier, also operates through the state on its way to Florida.  The information provided here offers job searchers information regarding those railroads currently operating within the state. 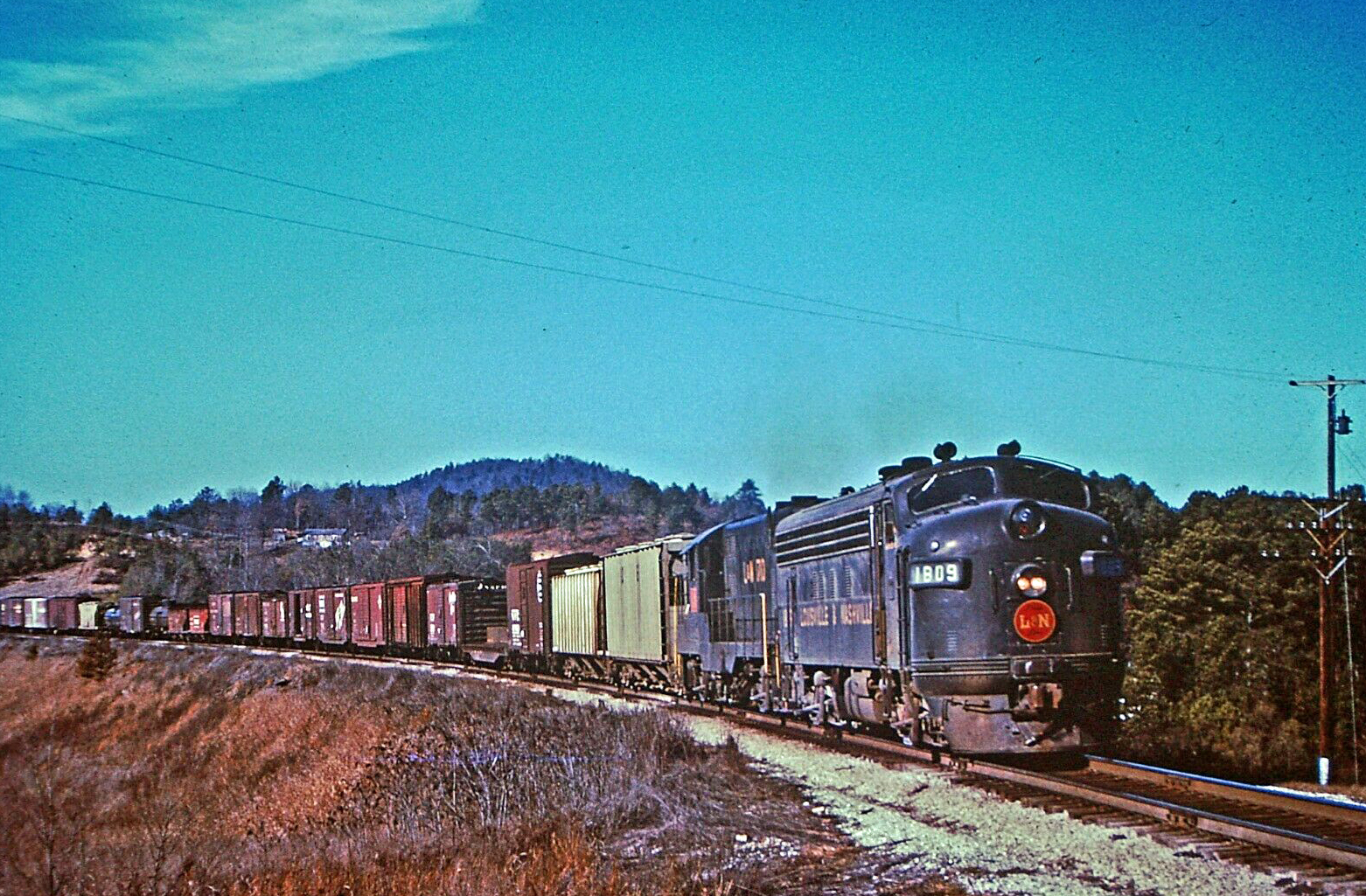 Louisville & Nashville F7A #1809 has a long manifest freight working its a way over the old Nashville, Chattanooga & St. Louis near Emerson, Georgia in February, 1959.

If you have a particular interest in working within the railroad industry but are not very familiar with how it operates then you may want to take the time to first learn more.

I must admit that even I am only providing second-hand information from what I have both read and heard here. That is because I thought I wanted to work in transportation until realizing how much time one spends away from home.

While the pay is excellent on Class I railroads in the end I decided it just was not for me. If you are still deciding yourself be sure to learn as much as you can about a career in the industry before making a decision.

Also, if you are a college student or plan to attend college both CSX and Norfolk Southern offer either scholarships or summertime internships for eventual management careers with their companies.

Please do not attempt to contact me regarding available positions. I do not mean to sound brash but there is simply not a lot which I can do to help.

You will need to contact the individual railroad regarding possible employment opportunities (larger operations such as Genesee & Wyoming, Watco, and Patriot Rail requests that all potential job seekers visit the employment page at their respective websites).

Athens Line, LLC: This short line is operated under contract to the Great Walton Railroad albeit its assets are owned by the city of Athens.

Bay Line Railroad:  The Bay Line was historically the Atlanta & St. Andrews Bay Railway which dated back to the early 20th century.  Today, it is a Genesee & Wyoming property.

Among the road's more than 100 miles of trackage in Alabama is a former section of the Central of Georgia Railway it maintains between Dothan, Alabama and Hilton, Georgia where interchange is established with the Chattahoochee Industrial and Hilton & Albany (both G&W properties).

Chattahoochee Bay Railroad: The Chattahoochee Bay is a 25-mile short line serving Dothan, Alabama and reaching the Georgia state line at Hilton where it interchanges with NS. It is owned by the Genesee & Wyoming.

Chattahoochee Industrial Railroad: This former Georgia-Pacific property was acquired by Genesee & Wyoming in 2004. It currently operates 15 miles connecting with CSX and Norfolk Southern lines near the Chattahoochee River.

The road is a Genesee & Wyoming property and has interchange with NS and the G&W-owned Georgia Southwestern in Columbus.  Its traffic consists of paper, fuel oil, carbon black, aggregate minerals, scrap iron, and bricks.

First Coast Railroad: This short line began in 2005 over property leased from CSX between Fernandina Beach, Florida and Seals, Georgia where it interchanges with CSX. The 32-mile line is operated by Genesee & Wyoming. 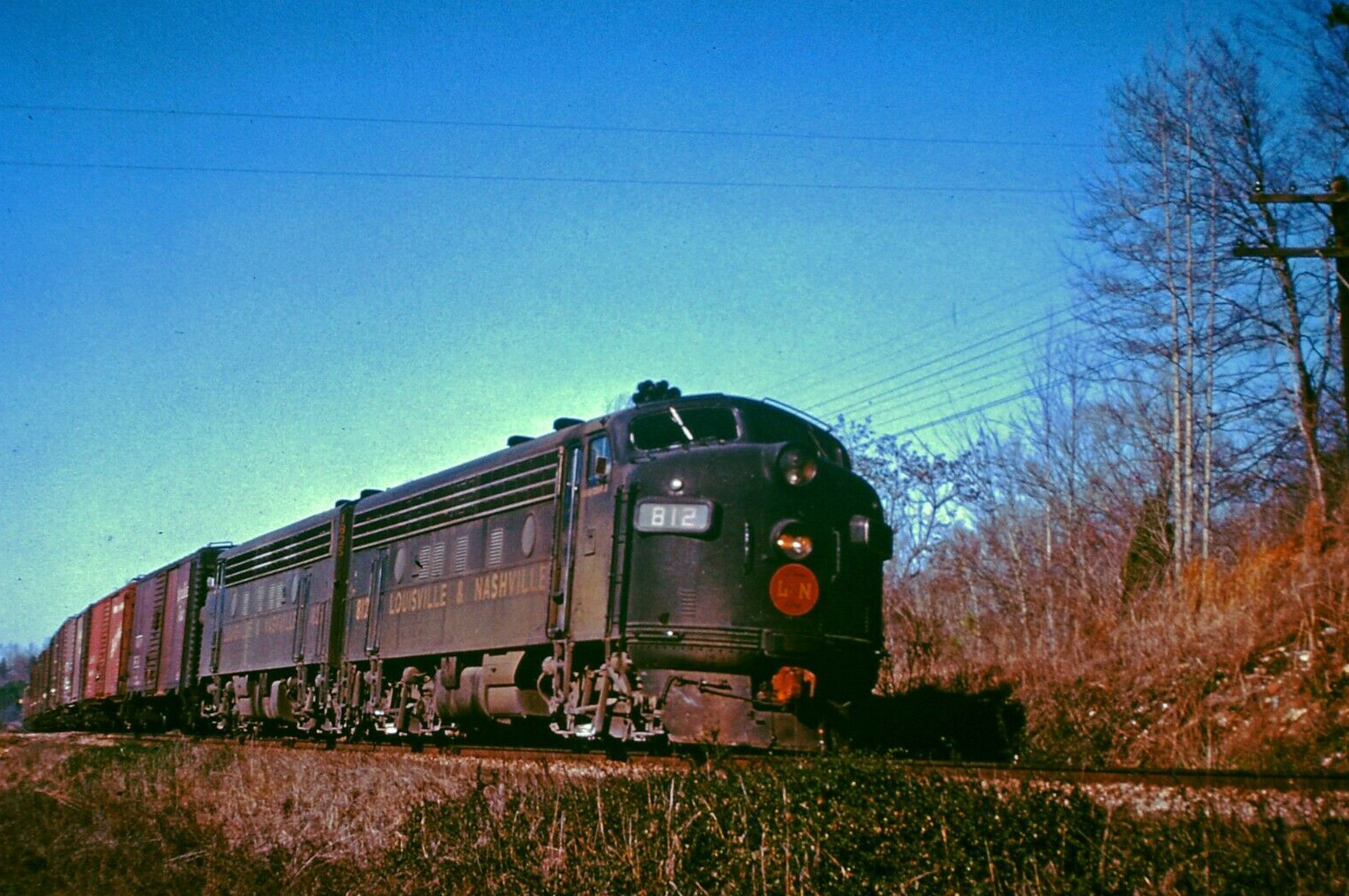 A pair of Louisville & Nashville F7A's are running the old Nashville, Chattanooga & St. Louis with a long freight train heading south through Kingston, Georgia in March, 1963.

It is currently an OmniTRAX property and handles a large variety of freight. For job opportunities please visit the railroad's web page or they may be contacted at: 1019 Coastline Avenue, Albany, Georgia 31705.

Georgia Central Railway: This large short line is a property of Genesee & Wyoming over trackage formerly of SCL heritage. The route is 171 miles in length connecting Macon with the coast at Savannah.

Georgia Northeastern Railroad: This privately-owned short line uses part of the former Louisville & Nashville's famed "Hook & Eye" route. It currently runs more than 100 miles in length. The company does operate its own website. They can also be contacted at: 109 Marr Avenue, Marietta, Georgia 30060.

Georgia Southwestern Railroad: This large short line, owned by Genesee & Wyoming, is primarily based in western Georgia but also extends into eastern Alabama at Eufaula. The road operates more than 230 miles of track.

Georgia Southern Railway: This Pioneer Railcorp property was formerly known as the Georgia Midland prior to 2010. The system currently operates three disconnected lines. Its current freight is quite diversified.

For employment information please visit their webpage. They can also be reached at: 200 East Main Street, Fort Valley, Georgia 31030.

Georgia Woodlands Railroad: This short line, currently owned by OmniTRAX, has been in service since 1988 operating just over 17 miles between Washington and Barnett. For information regarding employment please visit the company's web page or they may be contacted via 195 Harris Road, Washington, Georgia 30673.

Golden Isles Terminal Railroad: This small terminal road, a Genesee & Wyoming property, began service in 1998 over trackage formerly owned by the Colonel's Island Railroad. It operates a total of 13 miles on main line and primarily serves the Georgia Port Authority at Brunswick.

Great Walton Railroad: The small, independent Great Walton has been in service since 1987 and currently operates 10 miles between Monroe and Social Circle.

The trackage was once owned by the Georgia Railroad, part of the West Point Route.  For employment information please visit the railroad's website.

Hartwell Railroad: This historic short line dates back to its chartering in 1878 as a three-foot, narrow-gauge that would eventually connect Hartwell and Bowersville (10 miles). It later became a Southern property.

Heart of Georgia Railroad: This railroad is privately owned by Atlantic Western Transportation. It has been in service since 1999 operating 177 miles between Mahrt, Alabama and Vidalia, Georgia. Please visit their website for employment opportunities.

Hilton & Albany Railroad:  This short line, another Genesee & Wyoming property, launched in 2011 over 60 miles of leased Norfolk Southern trackage (ex-Central of Georgia) between Albany and Hilton, via Arlington.

It interchanges with NS in Albany, the G&W-owned Georgia Southwestern in Arlington, and the G&W-owned Chattahoochee Industrial and Bay Line Railroad in Hilton.

Sandersville Railroad: The privately owned Sandersville Railroad, also known as the "Kaolin Road," dating back to its chartering in 1893 soon completing its route from Sandersville to Tennille, where it interchanged with the Central of Georgia (3 miles). To learn more about employment opportunities please visit the company's website.

Savannah Port Terminal Railroad: This small terminal road is owned by Genesee & Wyoming that first began service on June 9, 1998 over property formerly owned by Savannah State Docks Railroad. It operates about 18 miles of main line track in the Savannah area.

The short line runs from an interchange with CSX at Southover Yard, through Thomas Square, to the Savannah River waterfront serving various businesses along the way. Its traffic consists of sulfuric acid, sulfur, gypsum, pulpboard, wood pellets, and petroleum.

The small line has always served the St. Marys area, running to Kinglands (10 miles) where it currently interchanges with the First Coast Railroad.

For many years the company served a burgeoning paper mill but today has no freight customers although it has developed a successful excursion business. For information regarding employment please visit their website.

Valdosta Railway: The Valdosta Railway has been in service since 1992 running from Clyattville to Valdosta (10 miles) interchanging with both CSX and NS. It has been under Genesee & Wyoming ownership since 2005.