You are certainly in luck if you are interested in railroading career in Indiana. Like its neighbor, Illinois, the state is home to five of the seven Class I railroads (including CSX Transportation, Union Pacific, Norfolk Southern, Canadian National, and Canadian Pacific), which is partly due to its proximity to Chicago.

Aside from the Class Is, Indiana is also home to two Class II, regionals and more than three dozen Class III, short lines! Additionally, Amtrak also operates across the state including its Lake Shore Limited, Cardinal, and trains which serve Michigan.

Today, not all of these corridors remain active but many do. The information provided here is to aid job searches in highlighting those railroads which currently operate within the state. 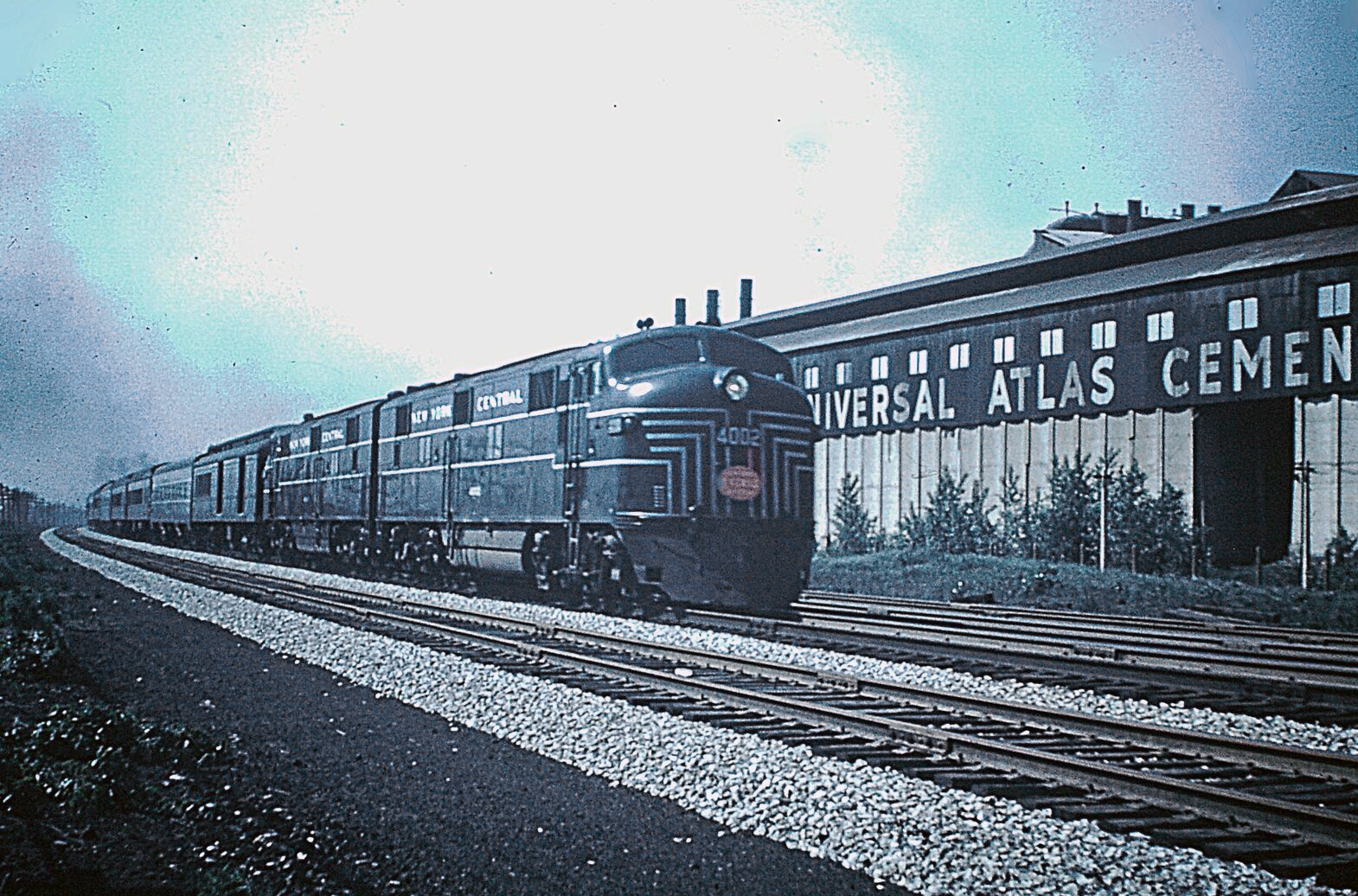 A pair of New York Central E7A's, only a year old in this photo, hustle a passenger train eastbound past the Universal Atlas Cement plant in Bluffington, Indiana (near Gary) during August, 1946.

A career in the railroad industry can be pretty grueling if you are not quite sure what you are getting yourself into, especially if you are interested in working for Class Is in either the fields of transportation or maintenance which include such positions as conductor, engineer, and general track worker.

These jobs require one to work long days, usually 12 hours, for days at a time. If you are part of the train crew you must adapt to sleeping in hotels and being away from your family and home on a regular basis as you will be out on the "road" constantly.

So, you must take these types of things into account when deciding if a career as a railroader is right for you. Smaller railroads offer better and more regular hours although the pay is not on par with the large Class Is.

Class Is pay their workers very, very well, the best in the industry and also offer excellent benefits and retirement so there area also plenty of positive aspects to being a railroader.

Also, if you are a college student or plan to remain in school after you graduate most Class I railroads offer either scholarships or management internship/graduate programs during the summer.

Finally, please do not contact me regarding possible position openings, as I cannot provide any help.

You will simply need to contact the railroad(s) in question (larger short line companies such as Genesee & Wyoming, Watco, and Patriot Rail requests that all potential job seekers visit the employment page at their respective websites).

Chesapeake & Indiana Railroad:  This short line is an independent system that operates roughly 28 miles from Malden to the Kankakee River via La Crosse.  It also operates a branch north from La Crosse to Wellsboro, where interchanges is established with CSX.  It also enjoys interchanges with Norfolk Southern at Thomaston.

Central Railroad of Indiana: This medium-sized carrier operates 96 miles between Cincinnati, Ohio and Shelbyville, Indiana. It has been in service since 1992 and was acquired by RailAmerica in 2000. Today, it is owned by Genesee & Wyoming.

Chicago, SouthShore & South Bend Railroad: This historic system traces its roots back to an interurban.

In 1989 the South Shore was able to completely drop passenger service, handed over to the Northern Indiana Commuter Transportation District.

Today, the road is owned by the Anacostia & Pacific Company, continuing to operate its original main line with traffic highly diversified. For information regarding employment please visit the company's website.

Decatur & Eastern Illinois Railroad:  Launched in 2018 and a division of Watco, this large short line maintains 182 miles that radiates in all four directions away from Chrisman, Illinois; branches extend to Decatur, Neoga, and Georgetown with additional branches reaching into Indiana at Hillsdale and Terre Haute.

Dubois County Railroad: This small short line is the freight-hauling arm of the Indiana Railway Museum. The systems operates 16 miles from a connection with NS at Huntingburg to Dubois (the museums owns a total of 24 miles, stretching as far as French Lick). For employment opportunities please contact the museum.

Elkhart & Western Railroad: This small short line was formed by the Pioneer Railcorp in 2001, acquiring 11 miles between Elkhart and Mishawaka. It later added 23, disconnected, miles between Argos and Walkerton, Indiana. To learn more about employment opportunities please visit the company's web page.

Evansville Western Railway: This short line is a division of P&L Transportation and operates 124.5 miles between Evansville, Indiana and Okawville, Illinois (there are also spurs reaching White Oak and Sugar Camp).

The property was acquired from CSX in 2005 with service commencing on January 1, 2006. To learn about job openings please visit the company's website.

The history of the line dates back to the former Erie Railroad's Chicago trunk line between the Windy City and New York. Most of the route was primarily abandoned following Conrail's startup in 1976.

A 1-mile segment was retained west of Rochester and is owned by the Fulton County Authority. Address: 1827 East Lucas Street, Rochester, Indiana 46975.

Gary Railway Company:  This short line began in 2009 over former Elgin, Joliet & Eastern trackage.  It is a division of Transtar, Inc.  The GRW maintains a total of 63 miles, most of which is yard and industrial trackage, to serve U. S. Steel’s Gary Works in Gary, Indiana.  Interchange is carried out with Canadian National.

Grand Elk Railroad: The Grand Elk Railroad is a Watco short line and has been in operation only since 2009. It operates 151 miles from NS between Grand Rapids, Michigan and Elkhart, Indiana. 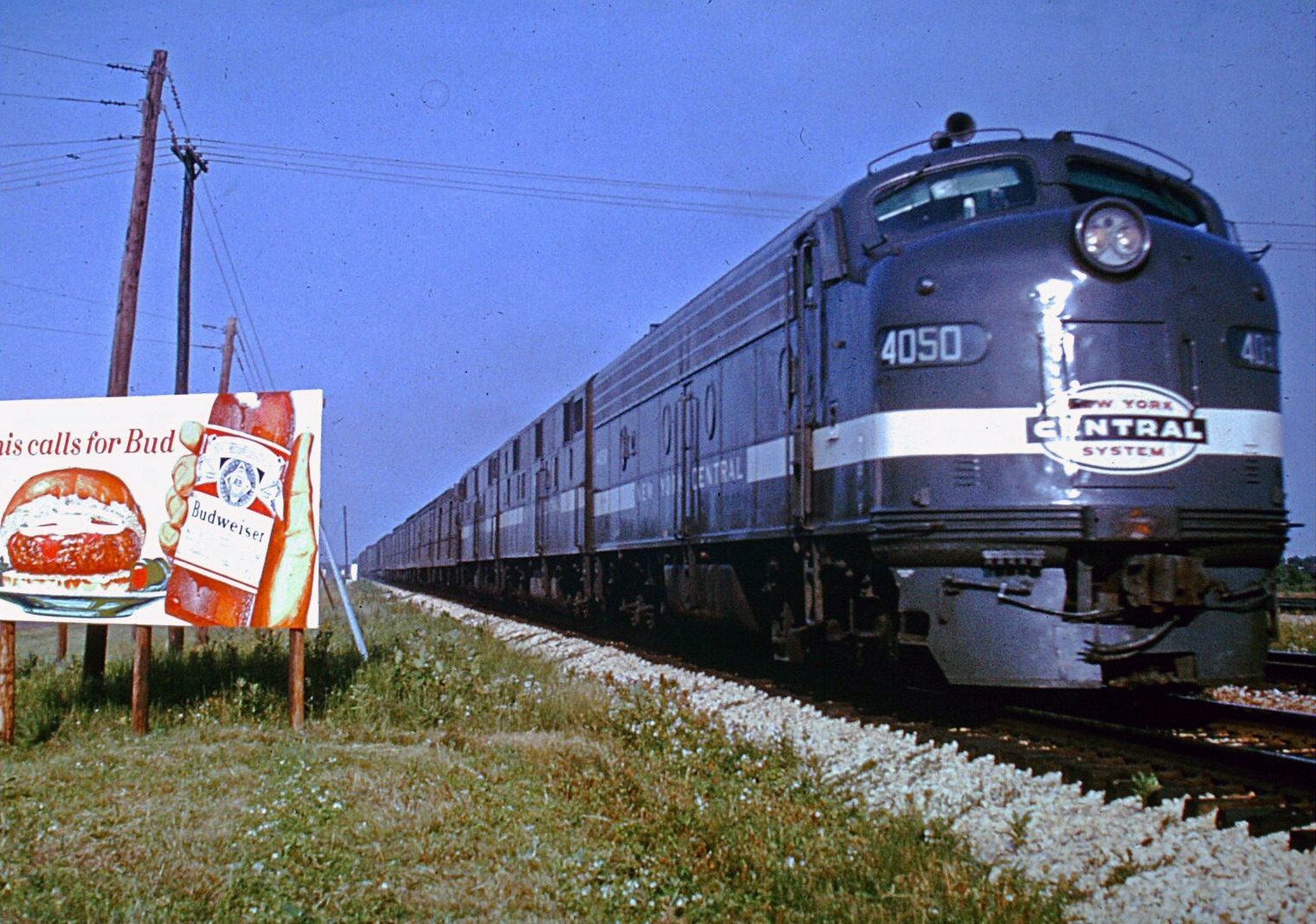 Indiana & Ohio Railway: This Genesee & Wyoming short line has been in service since 1985 when it acquired a former NYC branch between Valley Junction, Ohio and Brookville, Indiana. Today, the I&O operates about 570 miles and multitude of varying types of freight.

Indian Creek Railroad: This small railroad is owned by Rydman & Fox, Inc. and operates about 4.5 miles of trackage. It began service in 1981 running between Anderson, Indiana and its current connection with NS at Florida Station. For contact information please visit Rydman & Fox's website.

Indiana Harbor Belt Railroad: This historic terminal road traces its history back to 1907 when it was created through the mergers of several small systems in the Chicago area. Today, the switching line remains jointly owned by CSX, NS, and Canadian Pacific operating 320 miles. The company requests potential job applicants visit their website.

Today, it owns or has trackage rights on some 500 miles reaching Chicago, Louisville, and Newton, Illinois. For potential job opportunities please visit the company's website.

Indiana Northeastern Railroad: This short line traces its history back to the Pigeon River Railroad of 1992. Today, the company has blossomed into a 120-mile system serving northeastern Indiana, southern Michigan, and northwestern Ohio. The small company maintains its own website where contact information can be found.

Indiana Southern Railroad: This large system first began service in 1992 between Indianapolis and Evansville. It was acquired by RailAmerica in 2000 and subsequently by Genesee & Wyoming in 2012. The road operates nearly 200 miles.

It began service in 2000 as the Evansville Terminal Railway that originally operated 17 miles In 2011 it was cutback to just 3.8 miles following the cessation of grain service. Please visit the company's web page for contact information.

Kankakee, Beaverville & Southern Railroad:  This short line began service in 1977 over former New York Central trackage between Sheldon and Kankakee, Illinois acquired from Conrail that year.  In time the system grew as more trackage was shed by various railroads.

Lake Michigan & Indiana Railroad:  This non-operating short line, a division of the Keystone Railroad, is owned by ArcelorMittal (previously Bethlehem Steel Corporation) and has been in operation since 1999 when it began service on 66 miles of terminal and switching trackage in Burns Harbor, Indiana.  It is leased and operated by NS.

Louisville & Indiana Railroad: This short line, an Anacostia Rail Holdings property, has been in operation since 1994 that operates 106 miles between Indianapolis and Louisville, Kentucky. Please visit Anacostia's website regarding contact information for employment opportunities.

Madison Railroad: This 25-mile short line is owned by the City of Madison Port Authority and has been in service since 1978 when it acquired trackage between Madison and North Vernon. The company maintains its own website where contact information is available.

Napoleon, Defiance & Western Railroad: This short line was famously known as the Maumee & Western for many years due to the badly deteriorated track upon which it operated.

It was originally part of the Wabash running between Fort Wayne, Indiana and Napoleon, Ohio.  In 2012 Pioneer Railcorp took over the property and renamed it as the ND&W. For contact information please visit the company's web page.

New Castle Southern Railroad: This short line began service in September, 2021 by leasing 21 miles of Norfolk Southern trackage between Beesons and New Castle, Indiana (ex-Nickel Plate Road).  The line had previously been operated as the Connersville & New Castle Railroad since 1997.

Respondek Railroad: This company first began service in 1987. It is based in Boonville, Indiana where it provides contract rail car switching services and of short line rail operations.

South Chicago & Indiana Harbor Railway: This system traces its history back to the Chicago Short Line Railway incorporated on December 8, 1900 and began service in 1903.

Today, the SC&IH serves South Chicago and South Deering, Illinois along with Indiana Harbor, Indiana. It operates 27 miles of track and continues to serve as a terminal railroad. Address: 9746 Avenue North, Chicago, Illinois 60617.

Toledo, Peoria & Western Railway: This historic system dates back to its formation in 1887. In time the TP&W came to operate a system stretching from Logansport, Indiana to Fort Madison, Iowa with a branch reaching Keokuk, Iowa and Warsaw, Illinois. Today, it is owned by Genesee & Wyoming running between Peoria and Logansport.

U. S. Rail Corporation: This company operates a handful of short lines in the eastern United States. It operates one terminal road near Kokomo. Please visit their website for job information.

Vermilion Valley Railroad: This small short line operates about 6 miles of track between Danville, Illinois and Olin, Indiana. It was acquired from CSX by the Indiana Boxcar Corporation in 2003. For contact information about employment opportunities please visit Indiana Boxcar's website.

Vermilion Valley Railroad: This small short line operates about 6 miles of track between Danville, Illinois and Olin, Indiana on trackage once owned by the NYC.  It was acquired from CSX by the Indiana Boxcar Corportion in 2003.