Kentucky defines Appalachia and is best known for its rich source of bituminous coal which railroads still tap annually.

If you are interested in Kentucky railroad jobs then you most likely will be employed by a large Class I being that they make up more than 80% of the state's trackage today.

Additionally, the state is home to a handful of short lines and one regional, the Paducah & Louisville Railway.  The employment information presented here highlights every known railroad currently operating within Kentucky. 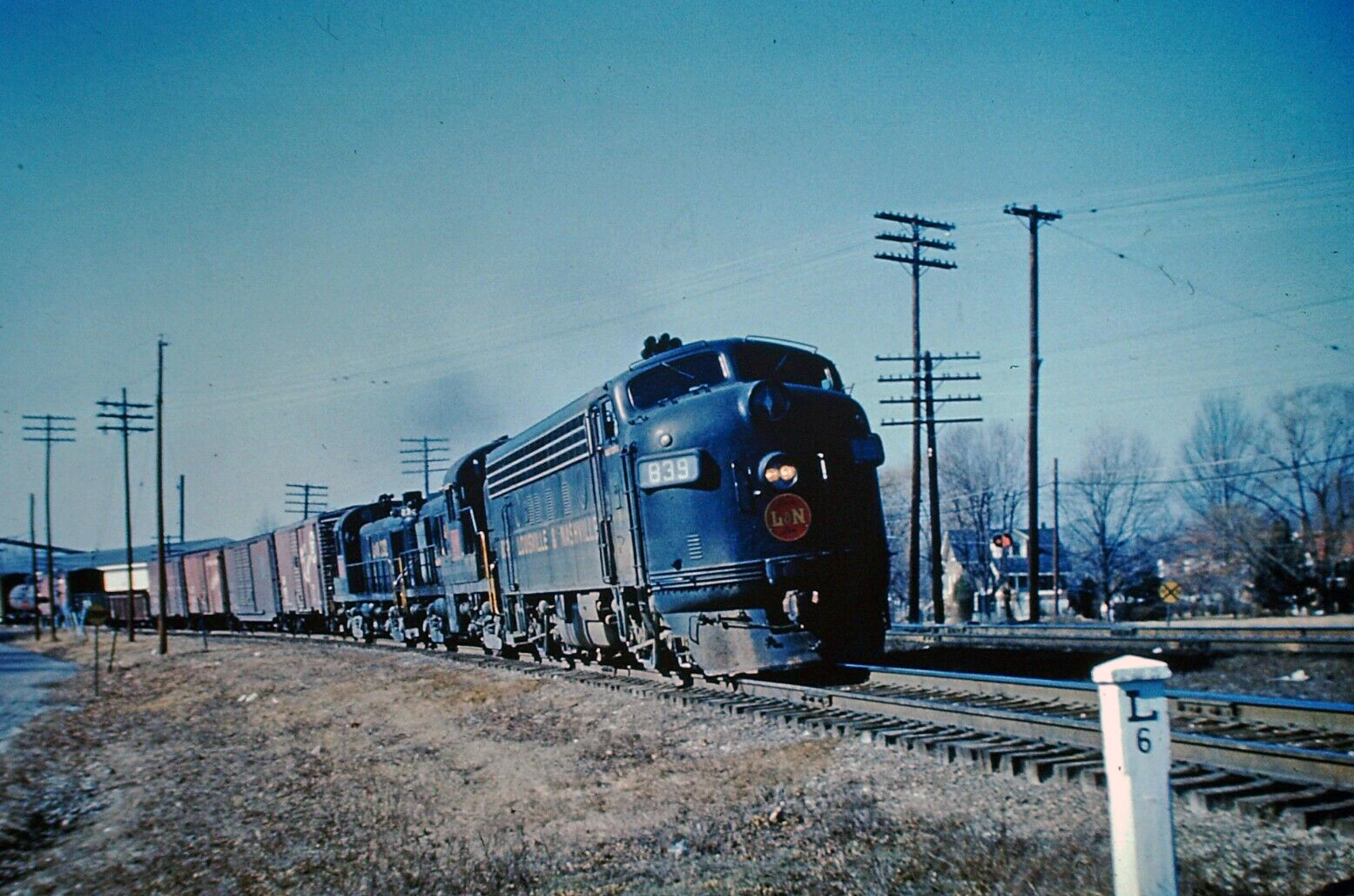 Louisville & Nashville F7A #839 and a pair of RS3's head eastbound past Milepost 6 in St. Matthews, Kentucky with a mixed freight during February, 1962.

The railroad industry has always offered excellent pay and benefits; among Class I's entry level positions as part of the train crew (conductor) usually begins in the $50,000's.  After one has worked for a number of years it is not uncommon to earn at, or over, $100,000 annually.

Other senior and skill positions also offer superb pay such as trainmaster, roadmaster, and signal maintainer.

Before deciding if a career as a railroader is really something you are interested you first may want to learn a little more about it (if you are pretty unfamiliar with the industry).

Being a railroader is really a lifestyle more than a job, especially if you take on the task as a train crewman/woman.

They spend countless hours out on the road and are home perhaps less than they are in the cab of a locomotive.

Of course, transportation is not the only field to pursue in the industry as you can also work in general maintenance, or if you have a college degree (or plan to go) consider a career in management.

Many Class I railroads these days either offer scholarships or summertime internships/graduate work.   For more information about a position you will need to contact whichever railroad you are interested in working for.

Finally, please do not contact me regarding possible position openings, as I cannot provide any help. You will simply need to contact the railroad(s) in question and most of the larger companies request you visit their website regarding career opportunities.

Over the time the system continued adding trackage and spinoffs from the larger Class Is, aggressively working to grow its customer base in the meantime.

Today, the road owns lines that trace their roots back to multiple "fallen flag" railroads spanning some 500 miles and carrying hundreds of thousands of carloads annually. For information regarding employment please visit the company's website.

Kentucky West Tennessee Railway: The KWT operates a 69-mile system of unconnected lines reaching Murray, Kentucky. The road has been a G&W property since 2005 and hauls only a select few types of freight.

Louisville & Indiana Railroad: This short line, an Anacostia Rail Holdings property, has been in operation since 1994 that operates 106 miles of trackage between Indianapolis and Louisville, Kentucky. It moves more than 35,000 carloads annually. Please visit Anacostia's website regarding job information.

Paducah & Louisville Railway: The P&L is owned by Four Rivers Transportation, Inc., a CSX subsidiary. The railroad stretches throughout western Kentucky along a system covering 265 miles between primarily Louisville and Paducah.

Today, this Class II, regional moves a wide variety of freight totaling 200,000 carloads annually. The company maintains its own website where information regarding employment may be found.

RJ Corman, Central Kentucky Lines: Another division of RJ Corman this collection of lines that comprise two different sections; one runs between Versailles and Lexington while the other serves Louisville and Winchester via Frankfort and Lexington. Both routes total roughly 115 miles.

RJ Corman, Memphis Line: This branch began operations in August, 1987 and runs from a connection with CSX, just south of Bowling Green to Cumberland City, Tennessee with a spur to Lewisburg. Overall the line is about 100 miles in length.

Transkentucky Transportation Railroad:  This short line was formed in 1979 by acquiring the L&N's' former branch between Paris and Maysville.  While the road moved largely coal it also handled other types of freight.

Its coal contract expired in 2016 and, in addition to heavy rains that summer which washed out the railroad near Maysville, the entire line was shutdown.  Today, TTI functions solely as a terminal line, serving a transload site in Paris.

West Tennessee Railroad: This short line has been in service since 1984 utilizing the former Gulf, Mobile & Ohio main line between Jackson and Kenton, Tennessee.