North Carolina is a place near and dear to me and while being a railroader can be a tough job, the state is a fine place to live and work with mild weather nearly year-round.

If you are interested in North Carolina railroad jobs the state is home to Class Is, CSX Transportation and Norfolk, along with Amtrak operating extensive regional services throughout the state.

While the large railroads make up more than 75% of North Carolina's current trackage the state is also home to nearly two-dozen shortlines.

Today, the Tarheel State offers a wide variety of originated freight from minerals and chemicals to timber and food products.

After one has worked for a number of years it is not uncommon to earn at, or over, $100,000 annually. Senior-level and skill positions (such as trainmaster, roadmaster, and signal maintainer) also routinely make six-digits or close to that figure. 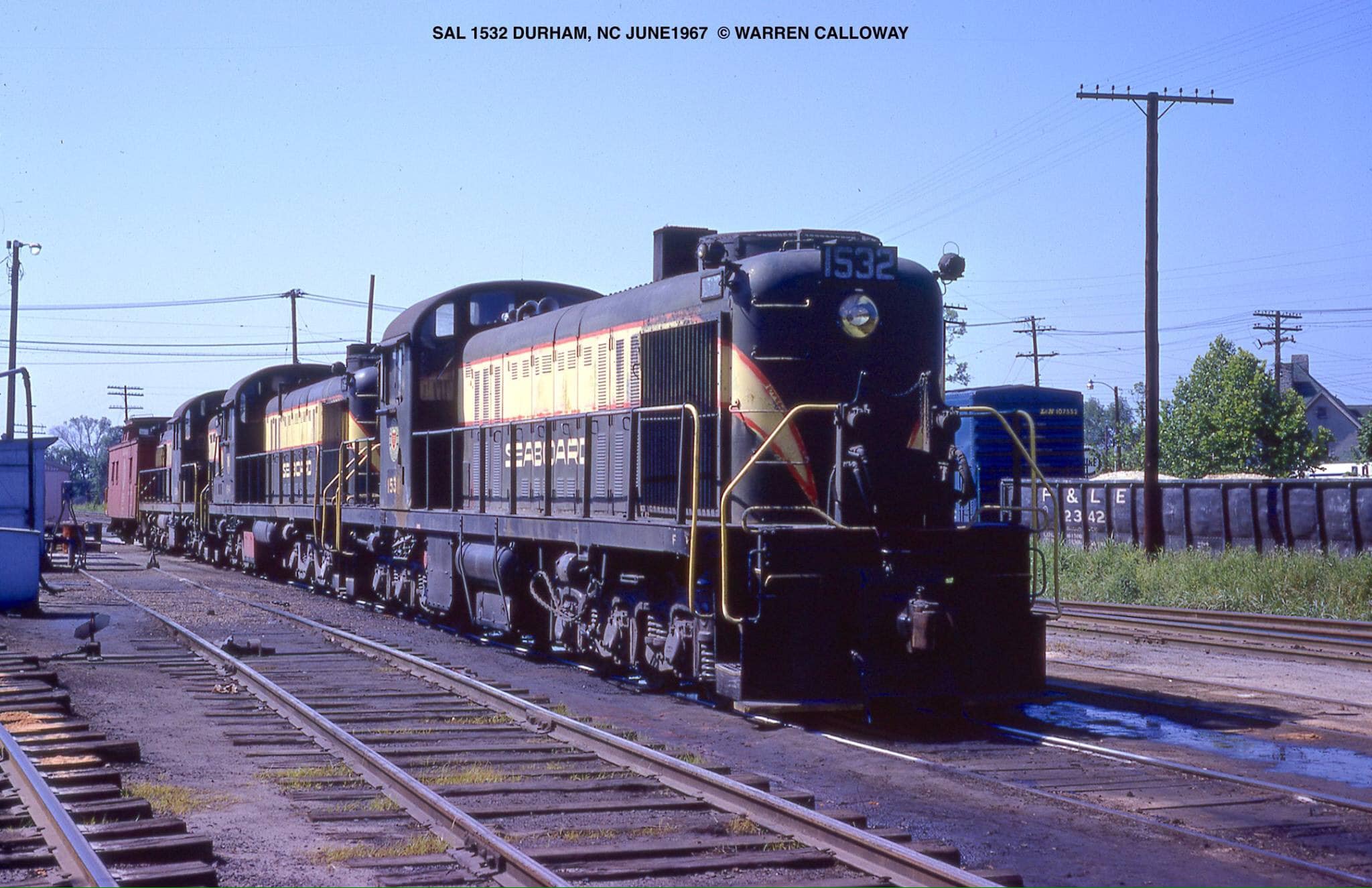 A pair of Seaboard Air Line RSC-2's bracket an RSC-3 as the trio lays over for the weekend in Durham, North Carolina during June, 1967. The group was assigned to the Durham-Henderson Local. Warren Calloway photo.

However, for reasons outside of my control I cannot post web links to these companies in this article.

If you do a quick Google search using the box below you can quickly find each railroad's website and their appropriate contact and/or career page information.

Being a railroader requires one to be very vigilant and alert at all times not to mention the constant stress that must be dealt with.

However, if you are able to land a job in North Carolina at least the weather is not something you will have to worry about most of the time.

Generally, the state's climate is pretty mild to warm, even during the winter months (unless you are based in the western mountains).

In any event, if you are pretty unfamiliar with the railroad industry it would definitely be worth your time to read more about it and what it takes to be a railroader.

Class I railroads almost always offer the best pay although it requires you to be on call for many hours at a time.

Lastly, if you attend college it may be worth your time to check out both the career pages of the Class Is listed below and those which are not.

Most of these large railroads offer management internship and/or graduate programs for potential applicants during the summer months (some even offer scholarships).

Finally, I cannot 100% guarantee the accuracy of the information listed below although it is updated to the best of my knowledge.

Since its days as a timber carrier the company has transitioned to haul all types of freight and still runs over its main line between Fayetteville and Aberdeen via Raeford, 47 miles. To learn about potential job openings visit the A&R website.

Aberdeen, Carolina & Western Railway: The AC&W began in 1987 and currently operates between Aberdeen and Star as well as between Charlotte and Gulf. The railroad does maintain its own website and contact information may be found there.

Alexander Railroad: This historic railroad, also known as "The Junebug Line," dates back to 1946, running 20 miles between Statesville and Taylorsville.

Atlantic & Western Railway: This Genesee & Wyoming property (since 2005) operates a short, 11-mile stretch of track north and south of Sanford. Please visit the Genesee & Wyoming website regarding careers with the company.

Chesapeake & Albemarle Railroad: The C&A began service in 1990 between South Norfolk, Virginia and Edenton, North Carolina via Elizabeth City, formally owned by what was the original Norfolk Southern. It is currently owned by Genesee & Wyoming.

Morehead & South Fork Railroad: Another Gulf & Ohio property this terminal railroad serves the Port of Morehead and has been in service since 2005.  It has been leased by Carolina Coastal since 2010 handling about 3,000 carloads annually.

RJ Corman/Carolina Lines:  Added to Corman's growing list of operations it officially opened for business during the last week of March, 2016.

The system utilizes 90 miles of what was the Carolina Southern Railroad, a short line that had operated the former Atlantic Coast Line properties between 1995 and 2011 after acquiring the trackage from CSX Transportation.

Thermal Belt Railway: This short line operates just about 9 miles of track between Bostic and Spindale with a connection to CSX at Thermal, beginning service in 1990. Address: 5725 Giles Farm Road, Morganton, North Carolina 28655.

Wilmington Terminal Railroad: This terminal road switches the Port of Wilmington, which began operations in 1986. It has been under Genesee & Wyoming control since 2005 handling much of the products arriving into as well as leaving the port.

Yadkin Valley Railroad: This railroad is another Gulf & Ohio property that owns 93 miles of track between Mount Airy and North Wilkesboro. It first began service in 1989 and today handles thousands of freight carloads on an annual basis.