Even today, few states except perhaps Illinois and California offer such a diverse base of railroading as Pennsylvania.

Historically, the state has been home to some of the best known railroads of all time such as its own, the powerful Pennsylvania Railroad.

Traditionally, the state has carried a traffic base that was predominantly coal but also other freight, and that still holds true today (coal continues to make up about 61% of the total).

If you live in Pennsylvania and are interested in a job on the railroad you are certainly blessed with the number of companies that operate within the state.

However, if you are not very familiar with the industry it would definitely be worth taking the time to learn much more about it before deciding. 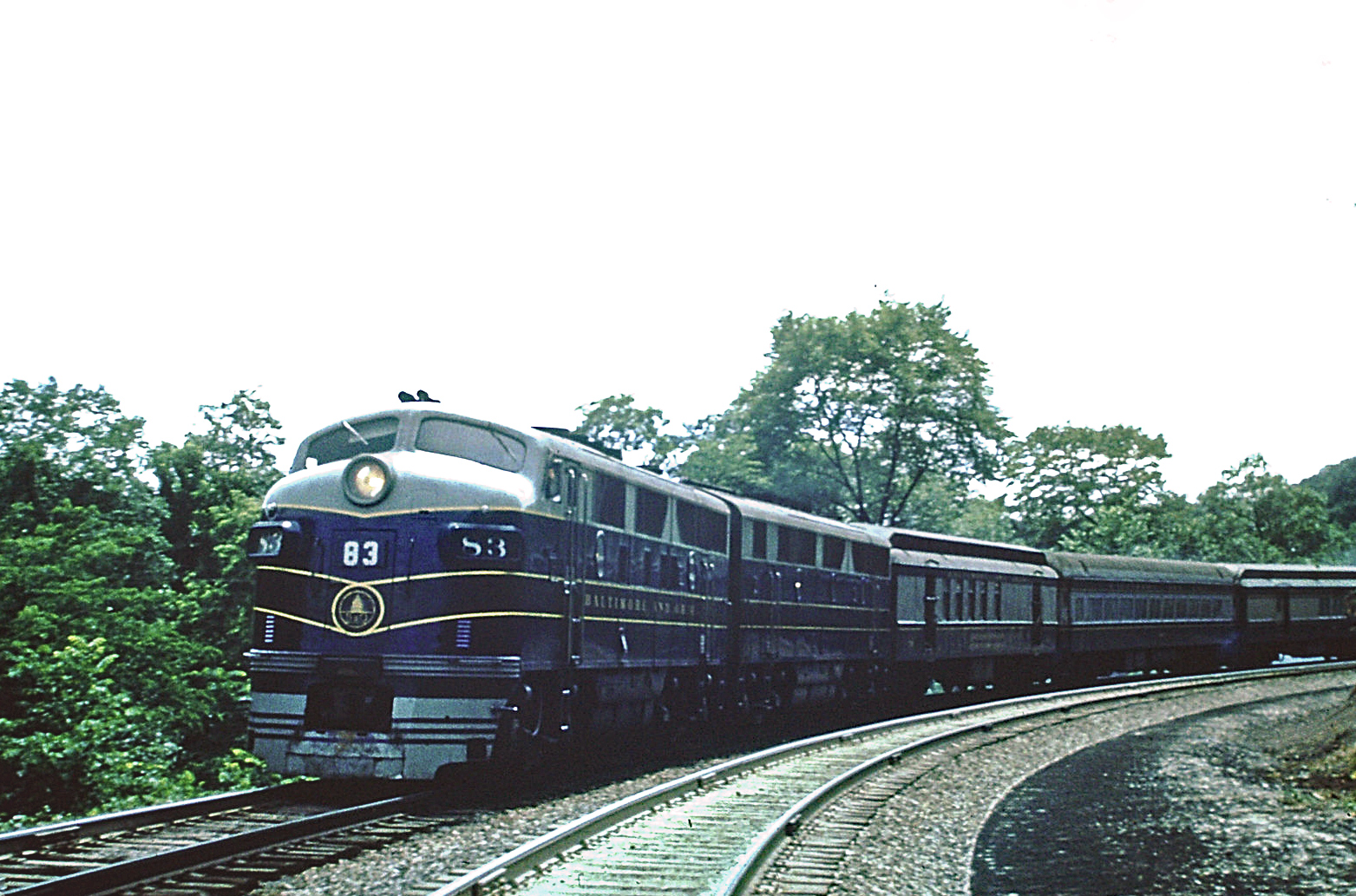 I was interested in being a railroader myself until I learned just how much time one is required to be out on the road and away from family.

Because of this many railroaders say it is as much a lifestyle as it is a job. Typically, it is Class I railroads that demand such long hours.

However, there are plenty of benefits including a nearly unmatched level of pay (some engineers, for instance, earn a six-digit salary in a single year) and excellent retirement.

Please be aware, that while I try my best to keep everything completely updated I cannot fully guarantee that there are no mistakes with the information presented below.

Finally, if you are attending college and are looking for internships or graduate work during the summer months you may want to check out the career pages of the Class Is as some offer such programs. 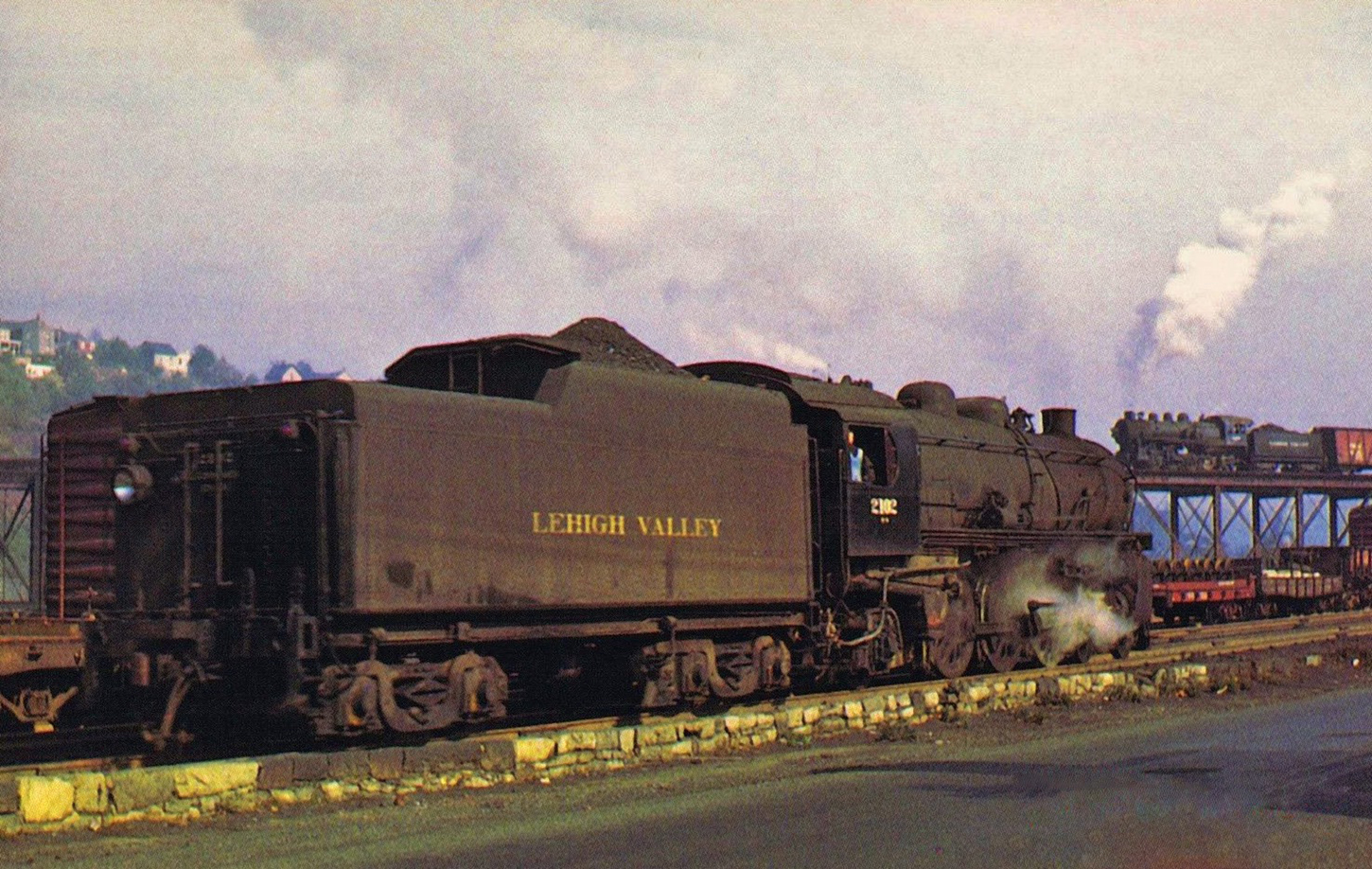 A busy scene at Easton, Pennsylvania; Lehigh Valley 4-6-2 #2102 is in the foreground as a Valley 2-8-0 passes over the Lehigh River in the background during the fall of 1948. John Maris photo.

New York, Susquehanna & Western Railway: The historic NYS&W (also known as the "Susie-Q") dates back to 1881 and is almost entirely located in New York and New Jersey although it does have a minor presence in northeastern Pennsylvania along the New York/PA border.

Overall the regional operates more than 400 miles of track today. Please visit the company's own website for job opportunities.

Reading, Blue Mountain & Northern Railroad (Reading & Northern Railroad): This regional has been in operation since 1983 operating former Reading and Lehigh Valley trackage along a main line that stretches from Reading to Pittston.

The railroad also operates numerous coal branches and during the summer months provides excursion services for the public. Please visit the RBM&N website for job openings.

However, while the original company was dissolved in 1989 it was restarted anew in 1990 operating trackage spun-off by Norfolk Southern that included most of the original W&LE Akron, Canton & Youngstown; and Pittsburgh & West Virginia stretching from Connellsville, Pennsylvania to Toledo and Lima, Ohio (via trackage rights). 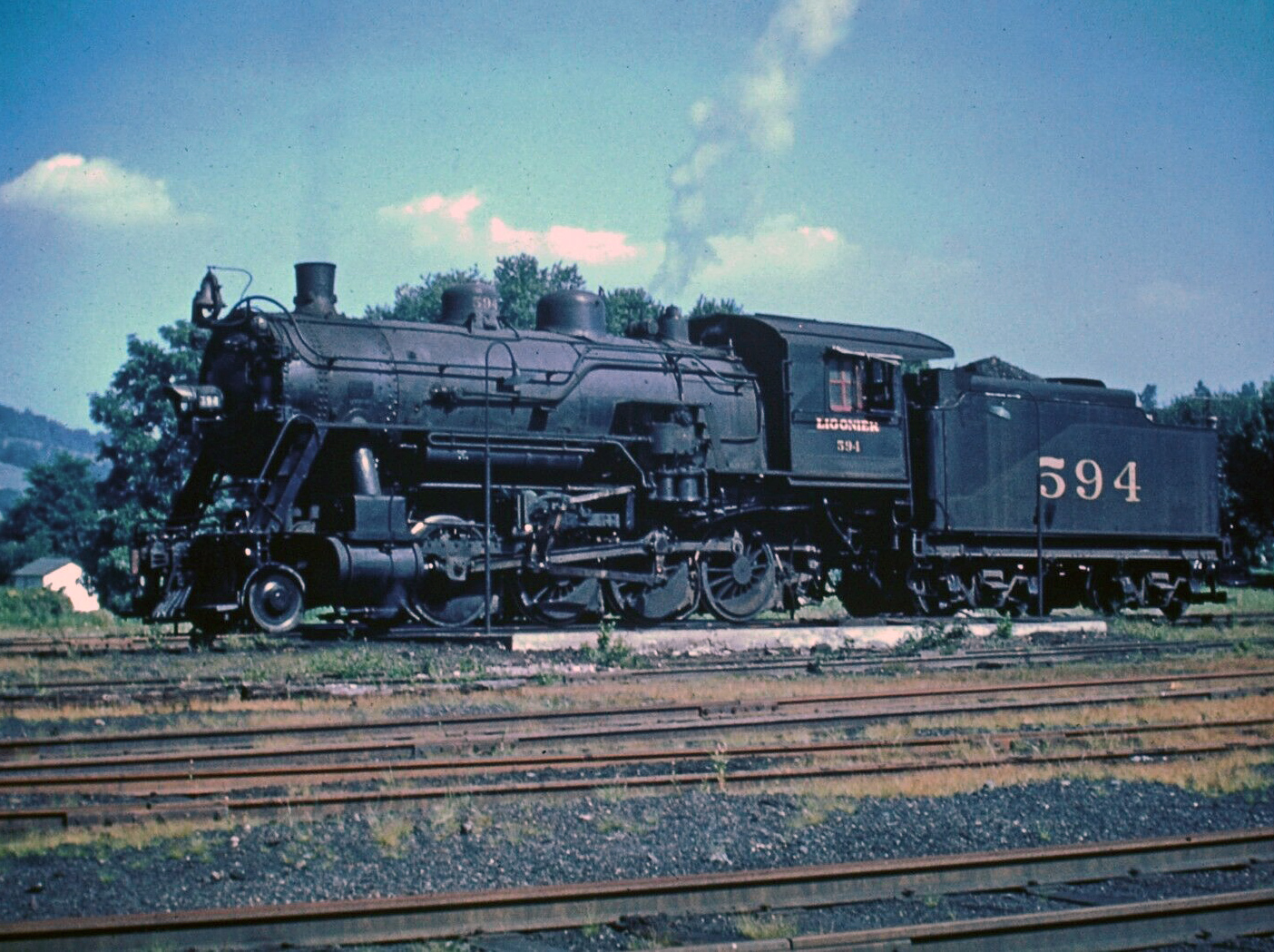 Ligonier Valley Railroad 2-8-0 #594 is seen here running light through the short line's small yard in its hometown of Ligonier, Pennsylvania on August 22, 1950. The LGV operated about 16 miles; its main line stretched 10.5 miles between Ligonier and Latrobe (where it connected with the PRR) while several spurs served industries and coal mines. The railroad shutdown on August 31, 1952.

Aliquippa & Ohio River Railroad: The A&OR is another railroad owned by Genesee & Wyoming operating just a short stretch of track (six miles) north of Pittsburgh with a connection to CSX.

In total the railroad operates about 70 miles of track connecting with both Class Is in the area, Norfolk Southern and CSX, as well as regionals Buffalo & Pittsburgh and Wheeling & Lake Erie. Visit Carload Express's website for career information.

Belvidere & Delaware River Railway: This short line is operated by the Black River Railroad and is mostly located in New Jersey although it does reach Easton, Pennsylvania. Please visit the B&DR website for contact information.

Brandywine Valley Railroad: This switching railroad is currently owned by Mittal Steel and dates back to the early 1980s operating trackage between Coatesville and Modena. To inquire about job openings; 50 South 1st Avenue, Coatesville, Pennsylvania 19320-3418.

Conemaugh & Black Lick Railroad: This historic switching/terminal road traces its history back to 1923 and operates about 2 miles of track in the Johnstown area to serve a local steel mill. The company's address is believed to be: 1170 8th Avenue, Bethlehem, Pennsylvania 18018.

Delaware-Lackawanna Railroad: The DL is operated by Genesee Valley Transportation and owns close to 90 miles of railroad in northeastern Pennsylvania.

The railroad is famous among railfans for its use of historic Alco diesel locomotives. Please visit GVT's website for career information.

The railroad also provides excursion services for the public during the spring, summer, and fall. Please visit their website for career opportunities.

It currently provides switching and terminal service to the towns of Bethlehem and Johnstown, totaling 80 miles including all sidings, yards, and spurs. The system maintains its own website.

Luzerne & Susquehanna Railway: This short line began operations in 1994 and owns more than 60 miles of track between Wilkes Barre and Scranton. Please visit the company's website for contact information.

Lycoming Valley Railroad: Another property owned by the North Shore Railroad Company, the LV operates between Muncy and Avis with two connections to Norfolk Southern. It currently operates a system nearly 50 miles in length.

Nittany & Bald Eagle Railroad: The N&BE is another North Shore railroad operating between Tyrone (near Altoona) and Lock Haven as well as a branch serving Pleasant Gap and State College. Overall the railroad operates about 70 miles of track and has multiple connections to Norfolk Southern.

Pennsylvania Southwestern Railroad: This short line is a Watco Companies property operating right around Midland serving location industries with a connection to NS.

Pittsburgh, Allegheny & McKees Rocks Railroad: The PAM as it is known serves industries near McKees. To contact the railroad; 1A Nichol Avenue, McKees Rocks, Pennsylvania 15136-2625.

R.J. Corman Railroad - Allentown Lines: This RJ Corman line has been in service since 1996 when it acquired a former Lehigh Valley branch from Conrail.

Today its property covers 14.5 miles between Allentown and nearby Fullerton. Please visit RJ Corman's website for career information with the company.

Shamokin Valley Railroad: Another of North Shore's railroads, this shortline operates between Northumberland and Mt. Carmel Junction connecting with both Norfolk Southern and the Reading & Northern.

Southwest Pennsylvania Railroad: This railroad is owned by Carload Express and began operations in 1995 using 60 miles of trackage between Uniontown and an interchange with Norfolk Southern north of Greensburg. Please visit Carload Express's website for career information.

Stourbridge Railway: This short line operates about 24 miles between Honesdale and Lackawaxen Township with a connection to Norfolk Southern located there.

It has went through a few owners since 1976. It was changed again to the Stourbridge Railway in 2009 and the line is currently operated by the Morristown & Erie.

Tyburn Railroad: This small short line operates just 1.5 miles of track near Morrisville and interchanges with CSX and NS at Fairless. It maintains its own website and can be contacted there.

Union Railroad: This historic shortline has been in operation since 1896 and is currently owned by Transtar. Please visit Transtar's website regarding job openings with their company.

Union County Industrial Railroad: This short line is yet another property owned by North Shore Railroad operating between Allenwood and Windfield with a connection to NS at Milto.

Western New York & Pennsylvania Railroad: The WNY&P began operations in 2001 and operates well over 300 miles of track in northwestern Pennsylvania and western New York. It is currently owned by the Livonia, Avon & Lakeville, a nearby short line itself. Please visit their website for career information.

York Railway: Today, the York Railway is operated by the Genesee & Wyoming although its history dates back to the famous little Maryland & Pennsylvania Railroad (the Ma & Pa). The railroad currently operates about 42 miles of track.

Youngstown & Southeastern Railroad: This railroad is owned by the Indiana Boxcar Corporation and began operations in 2006 between Youngstown, Ohio and Darlington, Pennsylvania with connections to both CSX and NS. Please visit Indiana Boxcar's website for job information.