American railroads reached their zenith during the 1910-1920 period.  The industry's dominance, which had been nearly impenetrable only a few decades prior, was finally capped.

The decade's most notable event, of course, was the U.S. involvement in World War I.  A series of events, largely due to an inability of meeting traffic demands, led to federal control.

Railroads were placed under the United States Railroad Administration's (USRA) direction in late 1917, where they remained for the next three years. 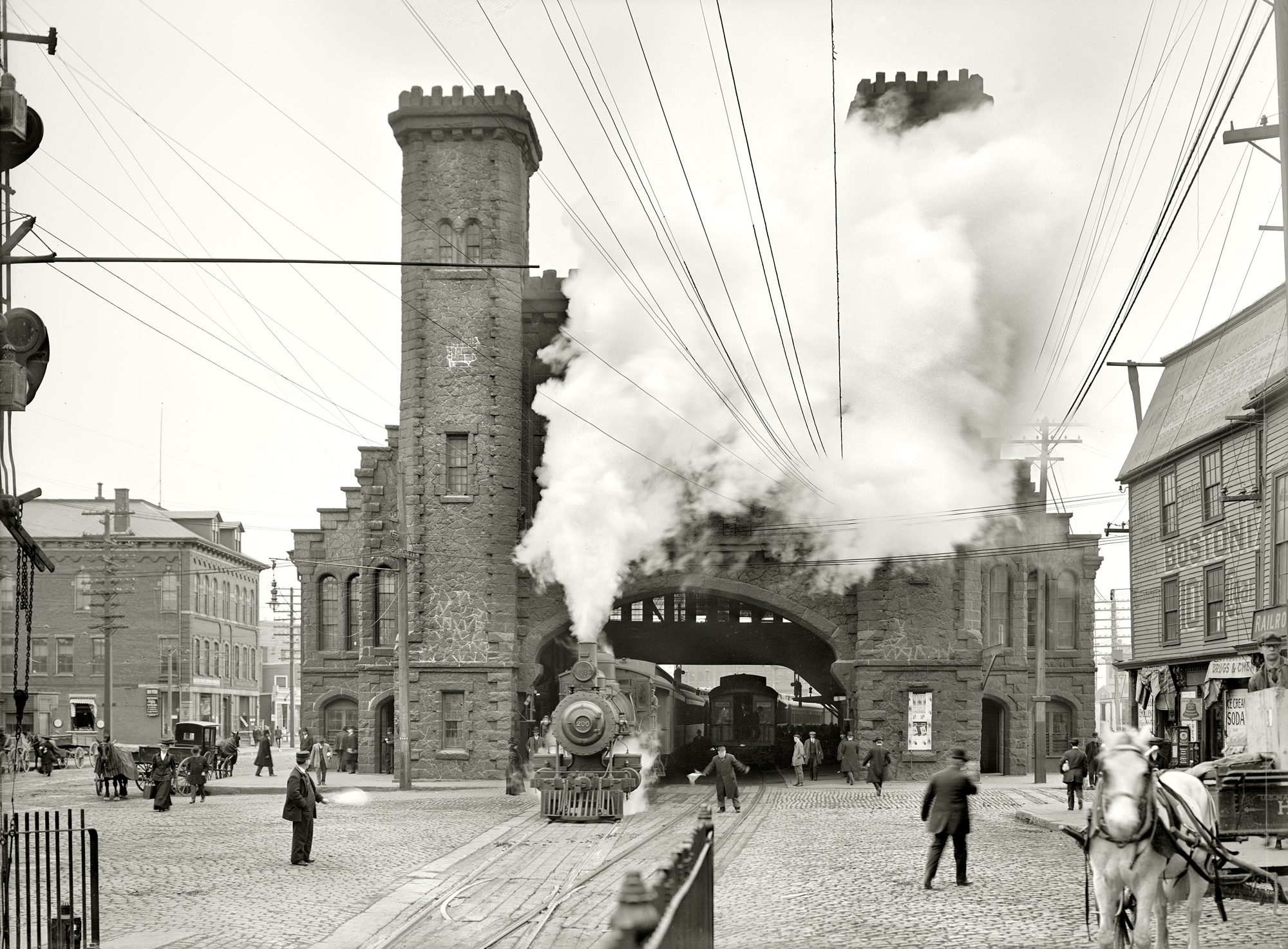 A view of Boston & Maine's beautiful station in Salem, Massachusetts, circa 1912, whereby trains entered through the building's center. The facility was opened in 1847 and razed in 1954. Detroit Publishing Company negative.

While successful in keeping trains running, the USRA was heavily criticized for its oppressive measures of pushing the nation's infrastructure to the brink.

In the aftermath, most companies were forced to spend heavily on repairs and worn out equipment.  They vowed to avoid a future takeover.  For its many flaws, the USRA did bring several positive changes, such as standardized practices.

Railroads in the post-1910 era found themselves in a changing America, one involving increased federal regulation and greater competition.  It began in 1910 when new president William Howard Taft expanded upon President Theodore Roosevelt's efforts to curb the industry's leverage.

While Roosevelt only wished to keep railroads in check, Taft had no love for them and oversaw passage of the Mann-Elkins Act.  This legislation further increased the Interstate Commerce Commission's authority, requiring railroads to show just cause for any rate hike.

* Mileage has declined every year since 1916.

The industry incurred further setbacks that decade as influential moguls passed away; stalwarts such as Edward Harriman (1919), J.P. Morgan (1913), and James J. Hill (1916) were all lost at this time.

In addition, Collis P. Huntington had died some years earlier in 1900.  The industry was now led by second and third-generation descendants who held fewer political powers.

Despite an increasingly hostile Washington, D.C., historian John Stover notes in his book, "The Routledge Historical Atlas Of The American Railroads," national mileage continued to grow and reached its all-time peak of 254,037 in 1916.

That year also witnessed the first decline in mileage when 400 miles were abandoned, a trend which continues through the 21st century.

In his book, "America's Fighting Railroads: A World War II Pictorial History," author Don DeNevi points out that additional rail mileage was laid down between 1910 and 1920.

The interurbans also reached their pinnacle at this time with mileage peaking at 15,580 in 1916.  These electrified rapid transit systems were once viewed as the future in fast, reliable, and clean transportation between intermediate points.

They had evolved out of the local streetcar movement but unfortunately, most were built to very low standards, inhibiting their ability to effectively compete against traditional steam railroads.

The industry rapidly took off during the 1890's and between 1901-1908 witnessed more than 1,000 new miles nearly every year.  In their book, "The Electric Interurban Railways In America," Dr.'s George Hilton and John Due note the industry achieved maturity in 1912 and rapidly declined after 1918.

The early automobile proved particularly harmful and the Great Depression all but destroyed what remained.  By World War II  the original network was barely recognizable and those which did survive dropped most of their interurban heritage for typical freight railroads. 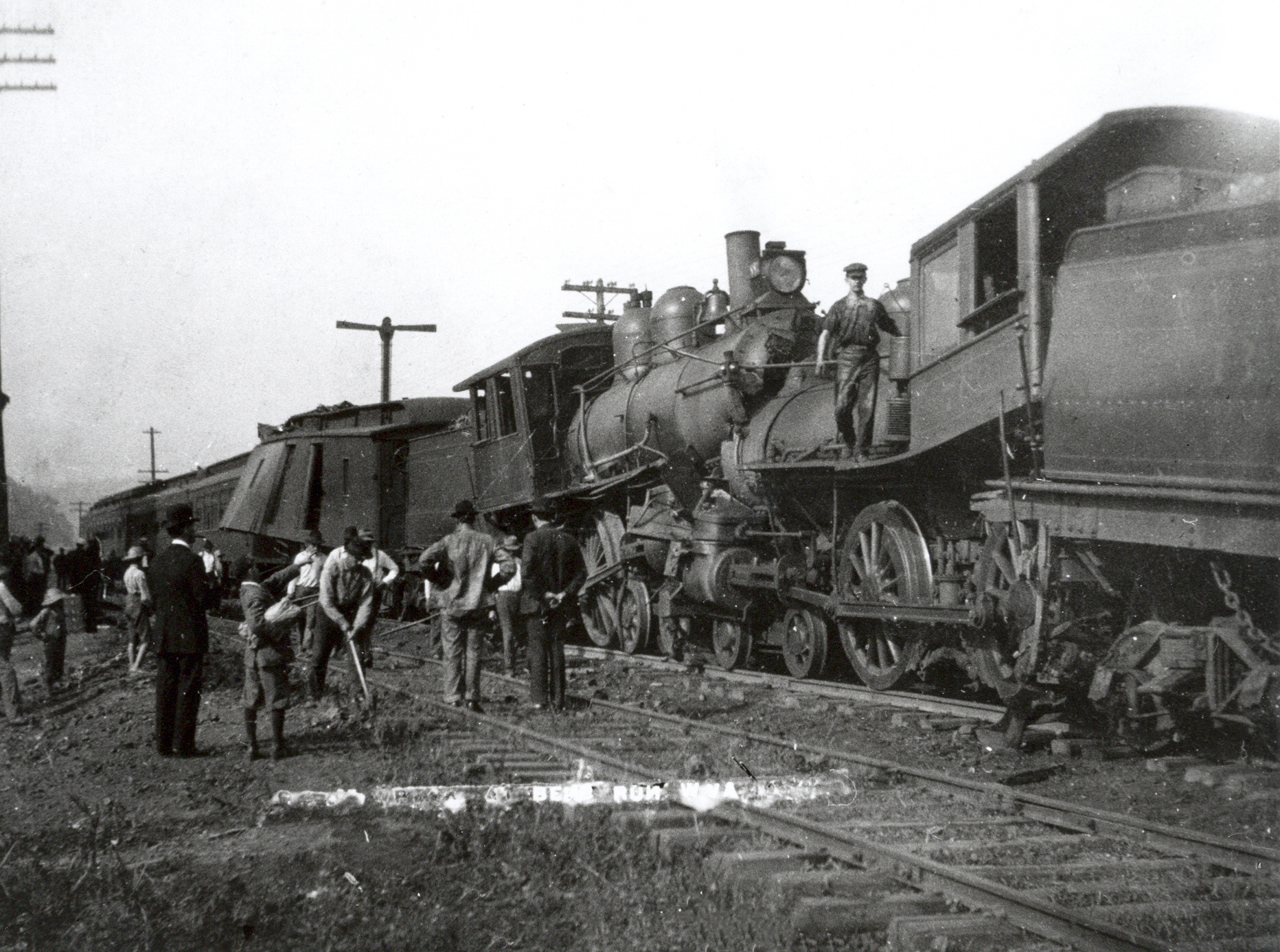 With the success of Henry Ford's Model T, which debuted on October 1, 1908, a radical shift occurred in America, one where the automobile was viewed as the future in ground transportation.

Although it took several more decades, by the post-World War II period, concrete replaced steel rails as the primary method of travel.

On July 11, 1916 the Federal Aid Road Act (or Bankhead–Shackleford Act) was signed into law by President Woodrow Wilson, which provided $75 million of federal money in a 50-50 match with individual states to improve roadways.  In 1917 there were already nearly 5 million motorized vehicles in use, a number which rapidly increased over the following decade.

As this was unfolding, World War I broke out in Europe during mid-summer, 1914, a conflict which the United States entered on April 6, 1917.  Railroads had witnessed traffic increases since hostilities began as the U.S. sent transatlantic supplies to its allies.

While the industry was ill-prepared to handle this spike in business it was also hampered by other issues, such as rising operating expenses as costs outpaced general inflation.  With the ICC now controlling the market, it denied their request to increase freight rates.  As a result, they remained flat at just 73 cents/ton-mile.

While the agency did allow a small 5% increase it proved largely ineffective.  Mr. Stover's book points out that by 1915 over 40,000 miles of railroads were in default or receivership.   Then, the industry suffered a car shortage.

The issue had been building for months as the government stipulated high-priority shipments deemed essential to the war effort take precedence over general movements.

Since most traffic was moving from west to east, terminals and yards were slammed with cars up and down the east coast.  This issue caused the shortage to grow to 158,000 cars by November, 1917.

In an attempt to untangle the growing mess, President Wilson established the United States Railroad Administration (USRA) on December 28, 1917.

The new agency was led by William G. McAdoo, Secretary of the Treasury, who also had experience in the industry.  As Jim Boyd points out in his book, "The American Freight Train," the move technically did not nationalize the industry although it did provide the USRA broad powers.

Instead, each railroad was rented and provided fair compensation for its cooperation (with little choice, it can be argued nationalization did occur indirectly).  Essentially, competition ended and the entire 254,000+ network operated as a single entity. 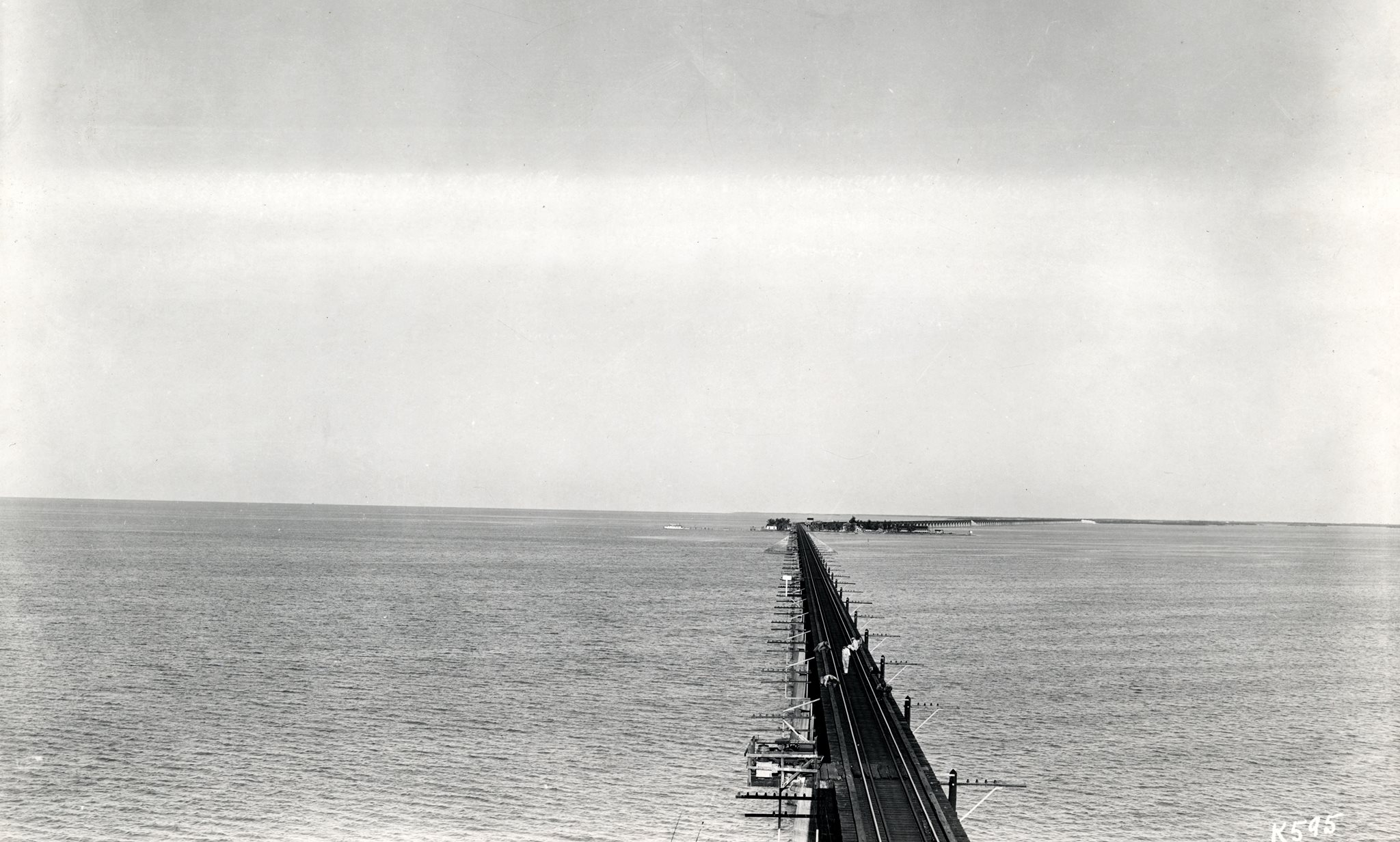 Many of the nation's landmark works of railroad engineering were completed during the 20th century's first two decades, such as the Florida East Coast Railway's Key West Extension. This breathtaking scene was immortalized by staff photographer Harry Wolfe from atop the stunning Seven Mile Bridge's Moser Channel Drawbridge (which allowed marine traffic to pass) looking northwest towards Pigeon Key.

Interested only in maintaining orderly operations, corridors were strained under the relentless traffic, resulting in deferred maintenance.  In addition, passenger trains deemed unnecessary were eliminated, shops and terminals centralized, and profits generally ignored.

On March 1, 1920 the network was finally returned to private ownership.  Unfortunately, companies were forced to spend heavily in repairing the damage incurred over the previous three years.  Because of this, railroads worked hard to prevent a future USRA takeover and was well-prepared when the country entered World War II in 1941.

In an ironic twist; in 1918 the USRA handled only 2% more ton miles of freight than the previous year under private operation.  McAdoo was also forced to increase freight rates and passenger fares in an effort to keep ahead of rising costs.  For the USRA's many negatives, there were several positives, primarily in the area of standardization.

Up until that time, the industry had few, aside from track gauge. Most railroads could not even agree on a standard boxcar dimension.

Steam locomotives were all custom built to fit each, individual carrier's needs.  All of that changed with the USRA whereby McAdoo formed a special committee to oversee standard locomotive and car manufacturing.

During this time USRA oversaw construction of more than 2,000 locomotives and 100,000 cars to augment the national fleet.  The former came in a variety of designs with the heavy and light 2-8-2's being the most popular.

In his book, "Railroads Across America: A Celebration Of 150 Years Of Railroading," author Mike Del Vecchio notes how Baldwin (the nation's largest locomotive manufacturer) was particularly skilled at mass production.

Many railroad managers probably felt the industry would never return to private ownership but those concerns were alleviated when the Railway Administration Act became law on March 21, 1918.

It specified that all lines would be returned to respective owner within 21 months of a peace treaty.   That held true after World War I ended on November 11, 1918.  On March 1, 1920 when the USRA's authority ended.  Unfortunately, it came with further ICC powers through the Esch–Cummins Act of February, 1920.

This latest legislation enabled the ICC to approve or disapprove any merger and show just cause for any abandonment or cessation of service.  Many railroads were forced to continue operating money-losing branches for decades. 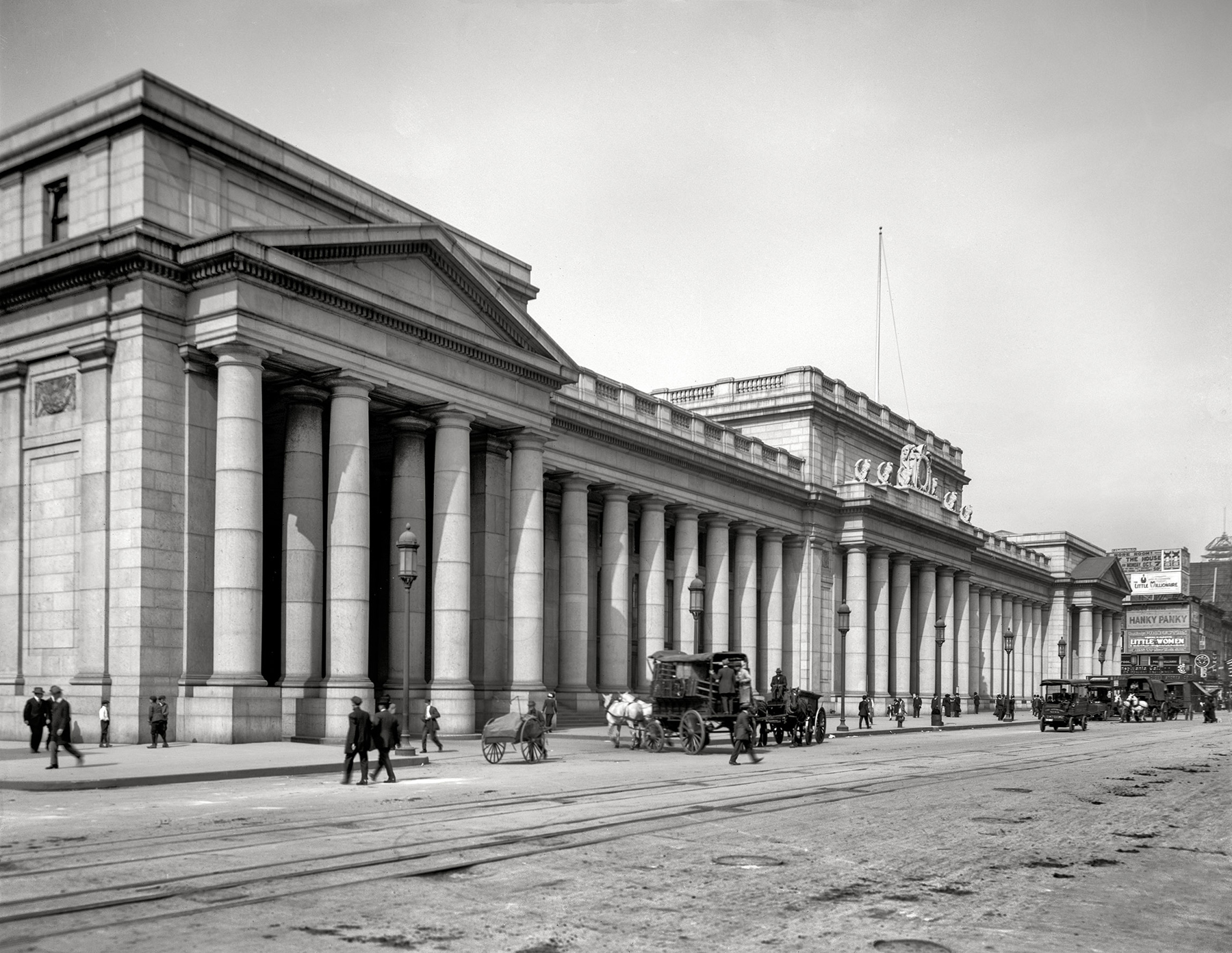 One of the great events of the 1910-1920 period was the opening of Pennsylvania Railroad's Pennsylvania Station in downtown Manhattan, New York. The east facade is seen here, circa 1912. Detroit Publishing Company negative.

Finally, while the industry dealt with a changing political landscape, a new type of motive power made its debut.

Many were required to meet smoke abatement measures.  With the internal-combustion engine now in development, some began wondering if such a power plant could be used in railroad applications.

It carried a B-B wheel arrangement and produced 225 horsepower utilizing a V-8 diesel engine.  Several were built, in conjunction with the American Locomotive Company (Alco) and Ingersoll-Rand, although most were not considered a great success.

During the 1920's, however, the technology was further refined allowing GE to produce a successful line of switchers.