The freight car has a long and fascinating history, tracing its heritage to England's primitive railroads of the 1820's.  The earliest devices were made of wood, traveled on tramways pulled by horses/mules, and carried coal or quarried stone.

The Granite Railway of Massachusetts is recognized as the country's first, launched in 1826 to move granite from a quarry at Quincy to a dock on the Neponset River at Milton.

In his book, "Railroads Across America," historian Mike Del Vecchio notes the first use of iron rails occurred in 1740 at Whitehaven, Cumberland while the flanged wheel was introduced in 1789 at Loughborough, Leicestershire.  The railroad gained acclaim in the United States soon after the Granite Railway entered service.

The first freight cars were simple flatcars.  As shippers requested specialization to handle specific products new types were born such as the boxcar, gondola, hopper, and tank car.  In this section we will look at each, including a brief history which led to their development. 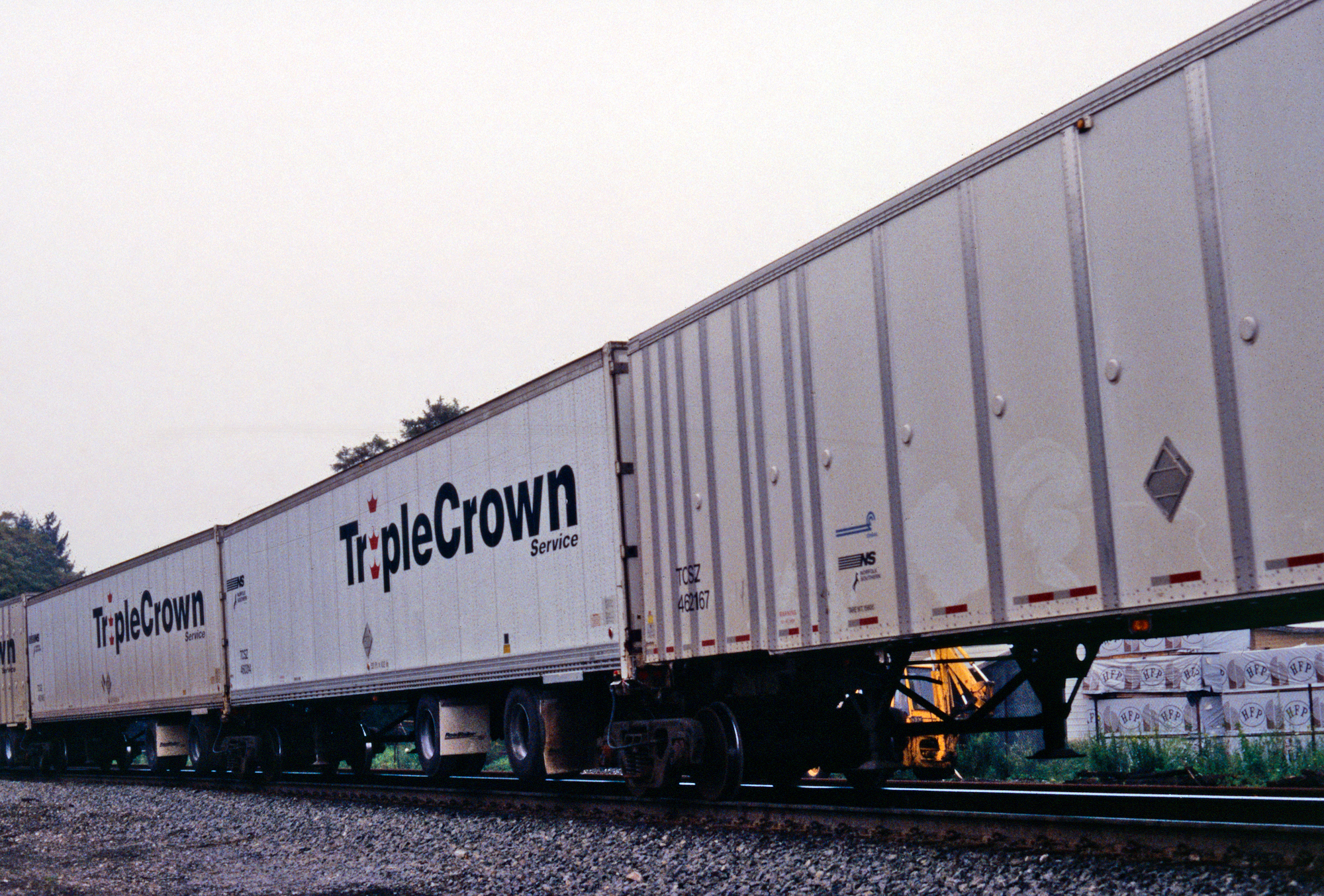 After the Stockton & Darlington opened in England during September of 1825 railroad technology quickly made its way across the Atlantic.   During those early years America leaned heavily on English influence.

When the B&O opened its original 13-mile main line from Baltimore to Ellicotts Mills (Ellicott City) it utilized simple passenger cars based from the stagecoach while freight was handled in rudimentary flatcars featuring a single axle at each end.  Another B&O invention was the gondola, a classic car still in use today.

It was created in 1832 when the railroad took a basic flatcar and attached short side-boards to keep barrels of flour from falling out.  Before long the limitations of both designs were recognized.

First, the ladding (freight) was exposed to weather while two rigid axles offered virtually no suspension.

While liquid or free-flowing products (like flour) could be hauled in sealed barrels carried in exposed cars the efficiency of doing so in a completely covered car held a great many advantages.  This led to the development of first covered gondola by the Mohawk & Hudson in 1833.

According to Mike Schafer's book, "Freight Train Cars," the use of springs was one of the earliest known freight car improvements.

By the 1830's the first four-wheel truck, one attached at each end, was employed on the B&O.  The original inventor of the device has been lost to history although its advantages were unquestioned.

It was an iron (later steel) assembly capable of holding two axles with springs for suspension in-between.  From a center bolster the truck swiveled freely beneath the car's frame.

The advantages were many including increased structural support, track wear reduction (by spreading out the car's weight more evenly), and an ability to more easily negotiating curves.

The truck was one of the few technological improvements railroads collectively embraced from an early period (others, such as the automatic air brake, knuckle coupler, and a universally standard-gauge took many years to gain acceptance).

Locomotives and cars grew ever larger as they were unencumbered by width restrictions associated with England's high-level station platforms (which allowed passengers to step directly onto trains instead of at ground level in the United States). 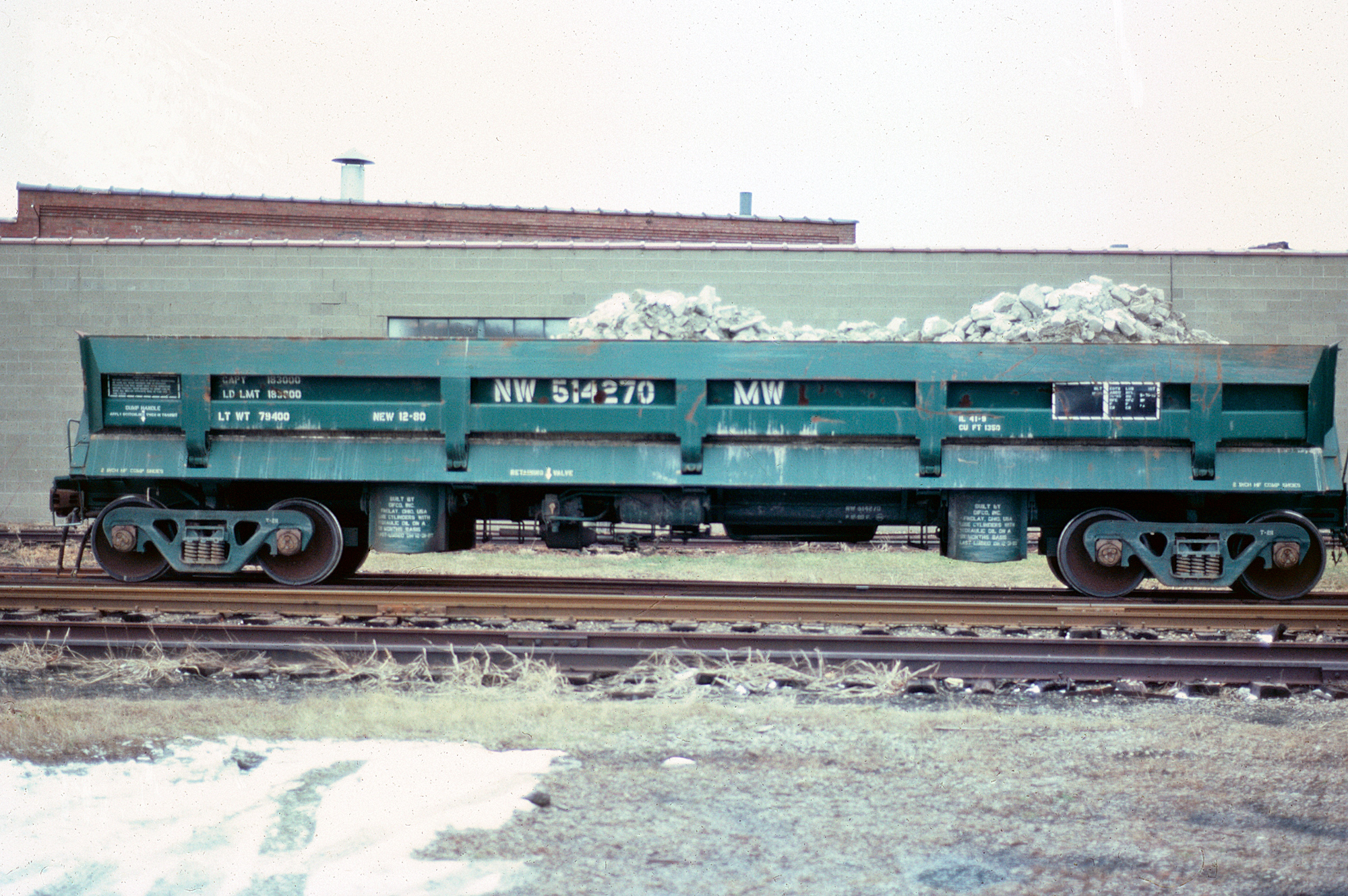 Norfolk & Western side dump car #514270 is seen here hauling what appears to be a load of riprap for right-of-way stabilization in March, 1983. These cars are often employed in such applications for maintenance-of-way (MOW). American-Rails.com collection.

The transport of aggregates and coal via a type of hopper, the "jimmy," was another invention born out of the early mining tramways.  The first use of this car was employed on the Lehigh Coal & Navigation Company (also known as the Mauch Chunk Switchback Railway) in 1827.

Interestingly, despite its creation, some railroads, like the B&O, were still using a flatcar-type contraption with large bins to haul coal into the latter 19th century.  Without question the boxcar was the greatest developed during that period, evolving from the covered gondola. 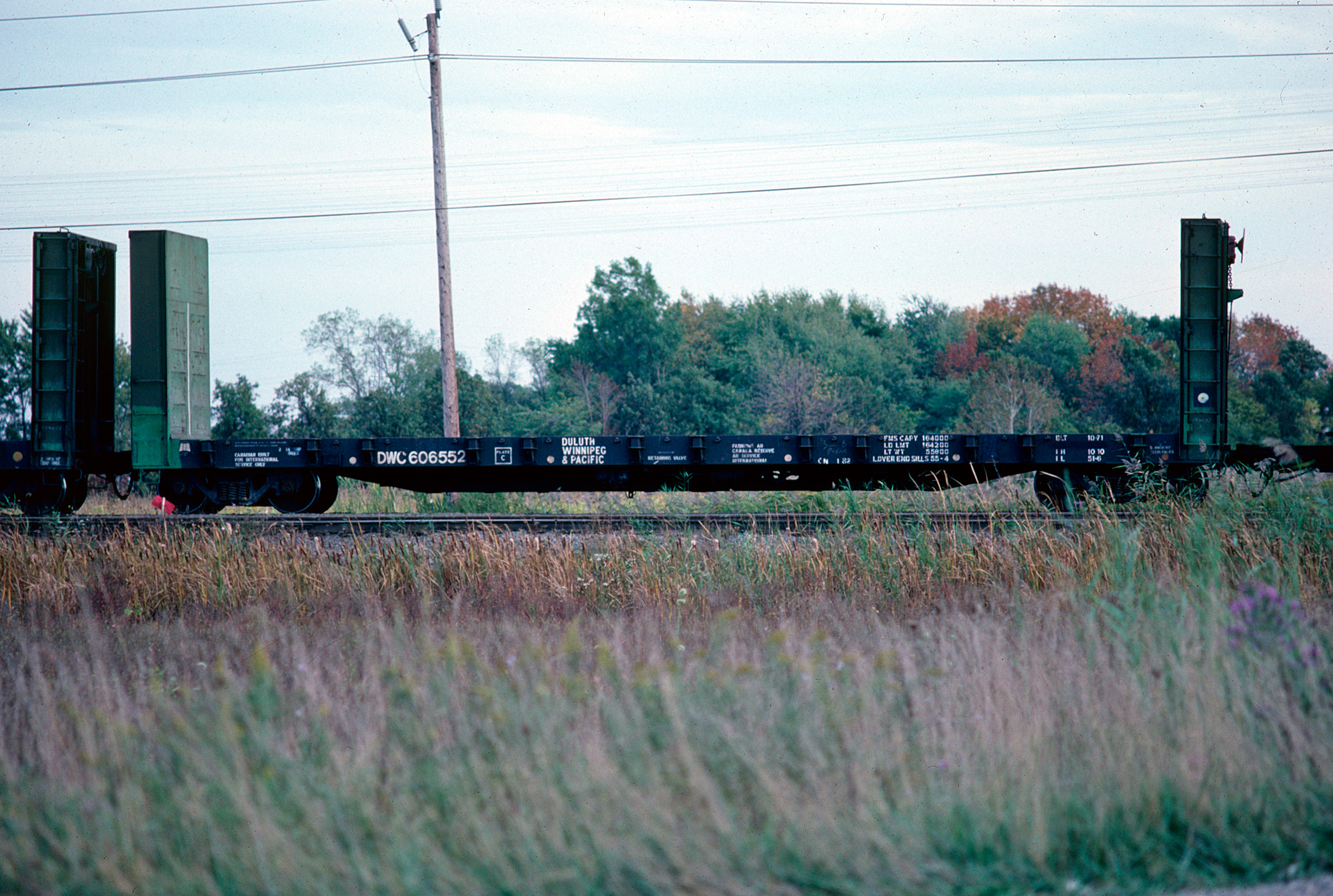 A Duluth, Winnipeg & Pacific 50-foot bulkhead flatcar (51', 6" inside length) is seen here in service during September of 1982. American-Rails.com collection.

It was beloved for an ability to handle virtually everything from lumber to automobiles and could be found comprising entire trains through the mid-20th century.

In his book, "Field Guide To Trains: Locomotives And Rolling Stock," author and historian Brian Solomon points out that there 251,000 standard and 179,000 insulated/specially equipped boxcars in service through 1980.

However, following deregulation their combined total in 2010 had fallen to just 95,514.  The reasons were many but largely due to mergers, loss of general manufacturing, and the rise in intermodal traffic.

Below is a list of tables describing codes used by freight clerks to identify specific car types and/or what they handled in service.

These could be found on all types of paperwork such as waybills and lading forms to help keep an otherwise chaotic army of cars organized and efficiently on the move to the right destination.

If it were up to railroads, boxcars would probably still be in widespread use today.  The redundancy they offered was unmatched.  Shippers, though, continued pushing for unique types to meet ever-greater needs.

One of the first truly specialized designs was the tank car, born following Edwin Laurentine Drake (Colonel Drake) discovering of oil in Titusville, Pennsylvania during August of 1858.

This vital fossil fuel was viscous and could not be transported in a standard gondola or boxcar.  The first of its kind was essentially a basic flatcar featuring horizontal vats.

But this system proved too cumbersome and inefficient so within a few years the more modern horizontal tank with a centralized top dome and safety valve came into use.  In the 1890's the first steel tank cars appeared.

Interestingly, through the early 20th century they could still be found manufactured of wood, with a tank that looked like a barrel on its side, suspended above a support system which was then attached to a steel underframe.

Over time the car became larger and heavier, carrying many other products ranging from basic water to dangerous chlorine. 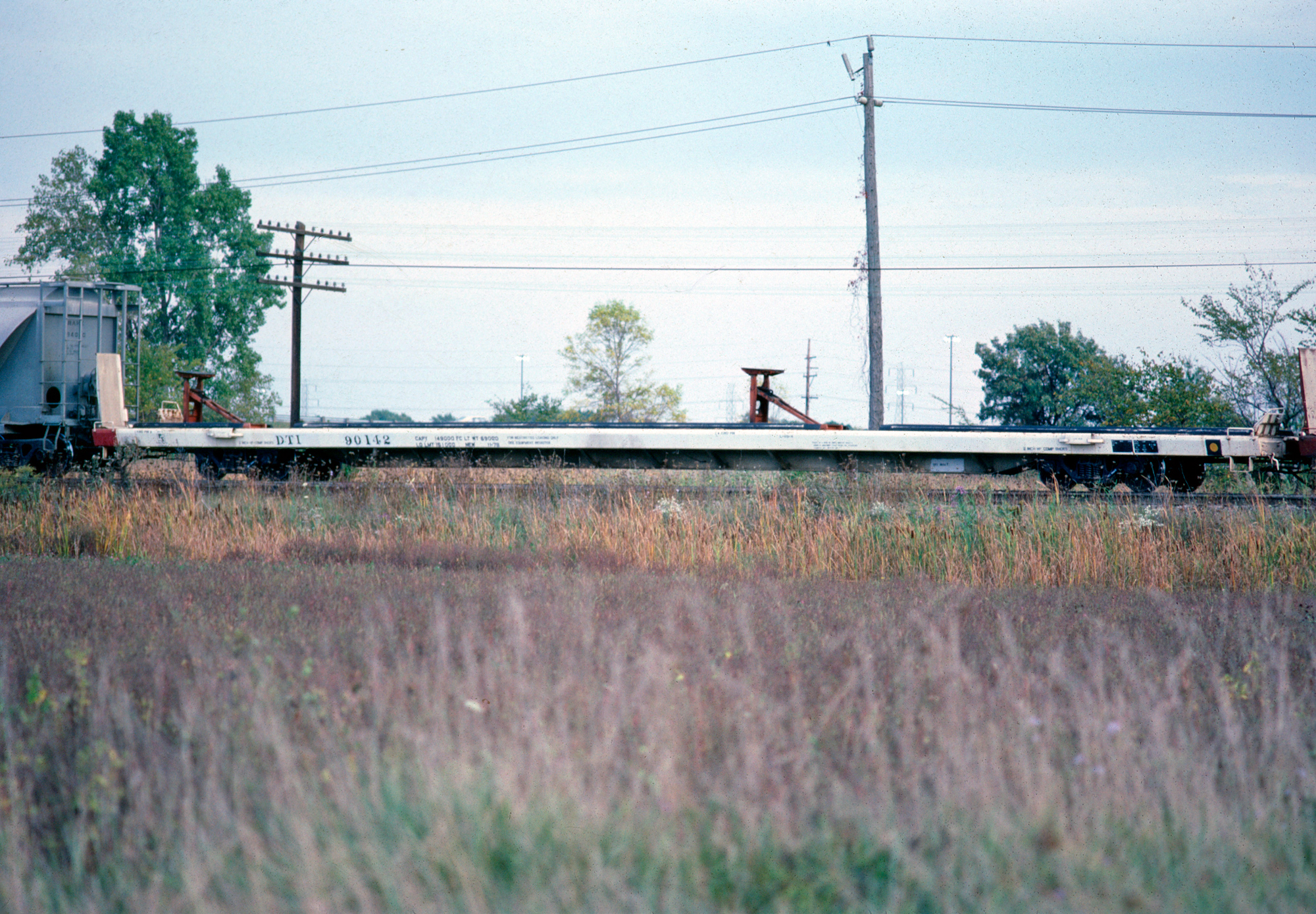 The transition from wood to iron/steel in car construction first appeared during the 1880s. At this time it was used predominantly in the areas of structural integrity such as sills and trusses.

Eventually, steel became the preferred means for all components due to its superior strength.  However, just as with the tank car, equipment carrying some elements of wood remained in use as late as the 1960's.

These were predominantly outside-braced boxcars and gondolas, which would pop up from time to time at local sidings.

After the Federal Railroad Administration set a 50-year shelf life on all rail equipment (mandating a ten-year period between overhauls) the wooden cars were finally forced into retirement.

The basic freight car designs fell into one of seven categories; autoracks, gondolas, hoppers, tank cars, well/spine cars, boxcars, and the common flatcar.  Of these, the well/spine car and autorack are relatively new, developed after World War II to handle automobiles and intermodal freight. 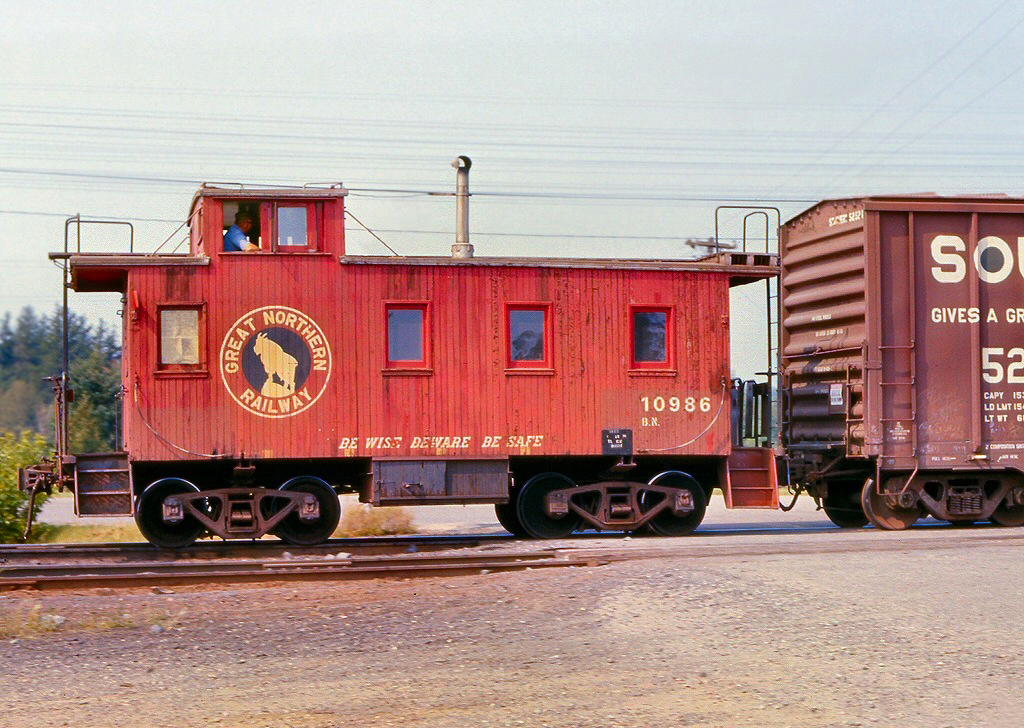 An aging wooden Great Northern caboose still looks good as it rides along on a Burlington Northern freight, which is operating over the Duluth, Missabe & Iron Range at Iron Junction, Minnesota during August of 1976. Rob Kitchen photo.

Today, specialization remains a vital part of the railroad industry.  Take, for instance, the flatcar which has morphed far beyond a basic horizontal bed with trucks.

The gondola is another example; they can now be found hauling coiled steel in what are called coil cars or feature higher sides with a drop bottom to transport coal.

Finally, there is specialization of the utilitarian boxcar; two of its more important refinements included open-slats to haul livestock, such as cattle and pigs, and refrigeration.

The so-called reefer got its start in the 1850's.  For many years ice did the trick via heavy insulation to keep the product cool.

Later, mechanization did away with the standard icing stations needed at various points to repack ice.  Today, reefers are still found in widespread use but the stock car is all but instinct.