The livestock car (or simply stock car) was once a common staple of freight trains. Before the advent of efficient highways and trucks, railroads were able to derive considerable profit from hauling livestock thanks to its high priority status and time sensitive nature.

While cattle are most often thought of in this capacity other animals were also moved by train such as pigs and chickens.

As trucks gained a larger market share after World War II (railroads were simply not as fast and animals normally did not move in large enough quantities for customers to justify the shipping costs) this source of traffic became less and less desirable.

As the 20th century wore on stock cars slowly disappeared from freight trains and by the 1980s were rather rare. Today, livestock traffic is virtually non-existent and the stock car, like the caboose, has become an obsolete piece of equipment. 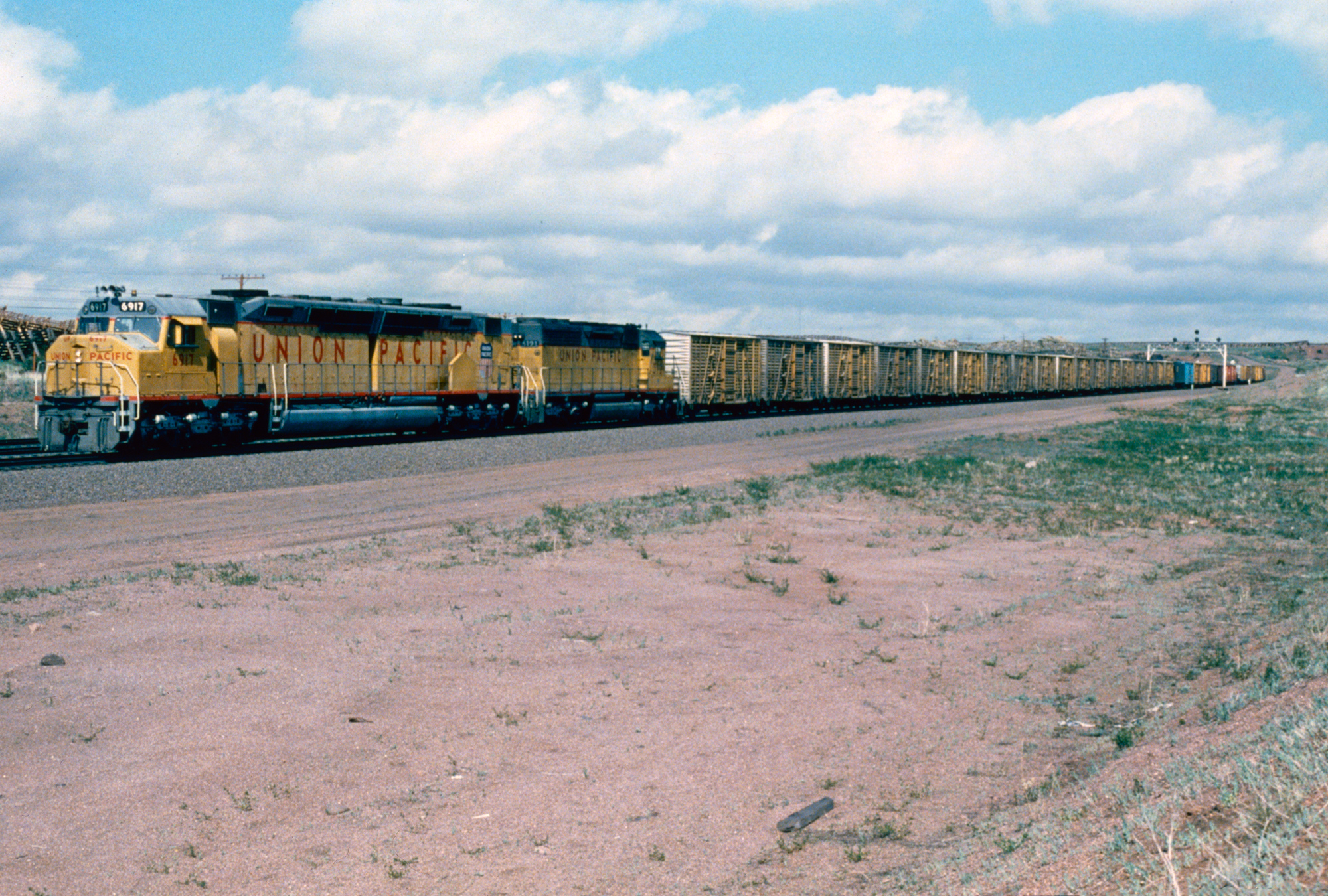 Union Pacific continued to handle some livestock business into the 1980s, as seen here with several stock cars at the head-end of a westbound freight descending Sherman Hill at Hermosa, Wyoming in the summer of 1985. The train is led by DDA40X "Centennial" #6917 and SD40-2 #3121. American-Rails.com collection.

The livestock car can trace its roots as far back as the beginning of the industry itself when animals first began to move by rail in the 1830s.

During those early days there was no dedicated stock car as railroads simply used whatever was available to move livestock, usually early boxcars (with slats so the animals had fresh air) or open gondolas.

According to Mike Schafer's book, "Freight Train Cars," it wasn't until the early 1860s that a specialized car was introduced to handle livestock (during the early to mid-19th century many of the now common railroad freight cars were developed), using a standard design that did not change dramatically for the next 120 years.

The layout was essentially a boxcar featuring a covered roof with slatted sides for proper ventilation.

The car was also equipped with a sliding door to, obviously, ease the loading and unloading process (some early cars also featured a removable upper deck to allow for different types of smaller animals to be transported more efficiently together, such as pigs and sheep).

According to John White, Jr.'s book, "The American Railroad Freight Car," the livestock business was primarily centralized east of the Mississippi River prior to the 1860's and the Transcontinental Railroad's completion.

However, as western lands opened to settlement the cattle trade did as well; pastureland was cheaper and the lands better suited for grazing.

By 1870, cattle was big business and Chicago would become the mecca of the stock trade in the latter 19th century.  The city was centrally located as a terminus for eastern trunk lines and gateway to the west.

The operation continued to expand prodigiously; two years later it was handling 30,000 head (of cattle) and 1,000 hogs every week and by 1901 its annual livestock traffic was over 16 million.

To keep up with demand, thousands of workers were employed at the facility.  During the latter half of the 19th century, through the 20th century, livestock cars changed little in appearance, save for their size and construction materials.

This increased again during the 1890s to 36 feet in length and 30 tons.  During this time the car came equipped with its only notable feature, more hospitable living quarters for the animals with the addition of water and feed troughs. 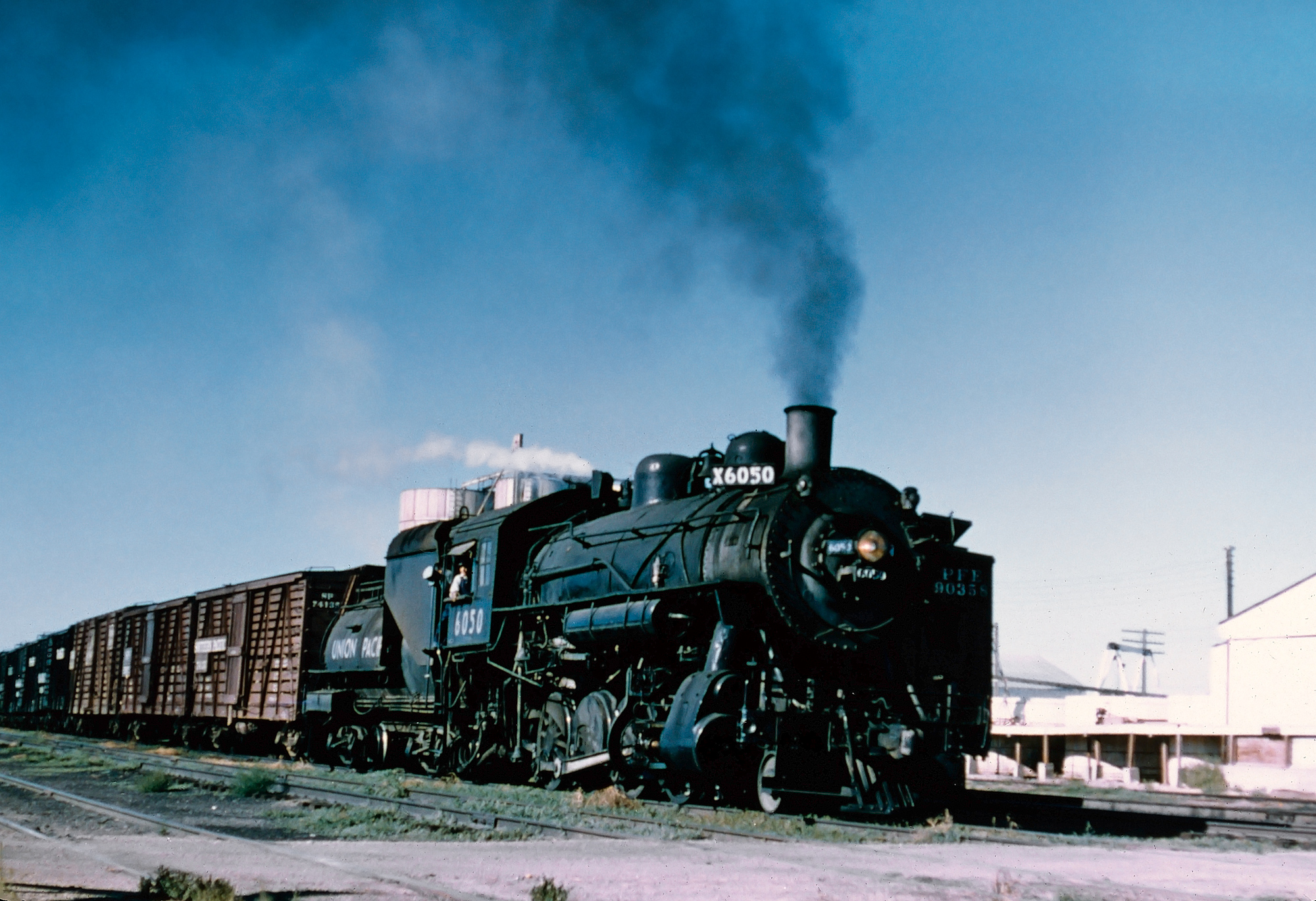 These humane features were only added after complaints were made regarding how livestock was handled in-transit.

By the late 1860's it was clear something needed to be done; livestock were emaciated after traveling for days in poor conditions, often thirsty and hungry (if not already dead).

It is said that as early as 1873, 120 million pounds of meat was lost annually as a result of poor shipping methods resulting in $8 million in lost revenue.

In 1869 Illinois passed a law stating livestock must be unloaded every 28 hours and given a 5 hour rest.  Federal legislation followed in 1872 although effective law did not arrive until 1906.

Over time these early efforts were successful in improving traveling conditions for the animals. Other interior improvements included pens to partition the animals apart from each other and reduce the possibility of trampling.

Throughout the 19th century designers came up with a long list of specialized cars to handle livestock although the general slatted boxcar was always the most preferred.

As the 20th century progressed perhaps the only other notable change to the livestock car was the material with which it was built.

For the first nearly 100 years of its use the railroad stock car was built mostly or entirely of wood.

However, during the mid-1900s all-steel construction became the norm and wooden cars were no longer produced although they could still regularly be found in service through at least the 1970s.

There were several factors for this: first was the simply the improvement in highways, which culminated with the Interstate system; the increased number of meatpacking plants, which reduced transit times resulting in less profit for the railroads; and the rise of the frozen food industry.

As a result railroads grew increasingly disinterested in hauling animals since the profits had largely disappeared by the 1980s.

Mr. Schafer also points out in his book that the process of handling livestock had become quite expensive requiring a large number of personnel and vast acreage to care for the animals as well as considerable transit time with several stops needed to feed and rest them.

One final expense issue regarded the location of the stock cars within the train, which had to be positioned directly behind the locomotives.

The purpose of this was to not only give the animals the smoothest ride possible and allow for them to be quickly and easily fed, watered, and rested but also to efficiently get the cars swapped in and out of the train.

To do so required additional more time and effort. By the 1980s stock cars had become predominantly a novelty as farms switched to trucks to transport their livestock as the distance to market was much shorter.

Today, there may be a few holdouts but the stock car has become virtually extinct as the profit is just no longer there to move livestock by rail.