Railroad maintenance-of-way has long been an important part of railroading although not always mechanized like it is today.

During the 19th century the work was performed entirely with manual labor.  Large section gangs could be found all along the main line keeping it serviceable on a daily basis.

Naturally, the task was both backbreaking and dangerous.  It was not until the early 1900's that the first forms of mechanization appeared.  One of the most popular was the do-it-all Jordan Spreader.

This easy-to-maintain and relatively simple machine could perform a wide variety of tasks ranging from ballast regulation to snow removal.

They were used throughout the 20th century and can still be found on some railroads today.  As time passed, and technologies improved, newer designs with specialization in mind eventually replaced the Jordan.

Take, for instance, the ditch cleaner, which effectively returns ditches to maximum efficiency.  Another is the undercuttter, a beastly contraption capable of removing ballast from beneath the track all by itself.

There is also equipment to quickly and efficiently insert ties, plates, and spikes.  These machines, and others, have largely removed the human element.  However, the age-old task of doing this by hand still endures today. 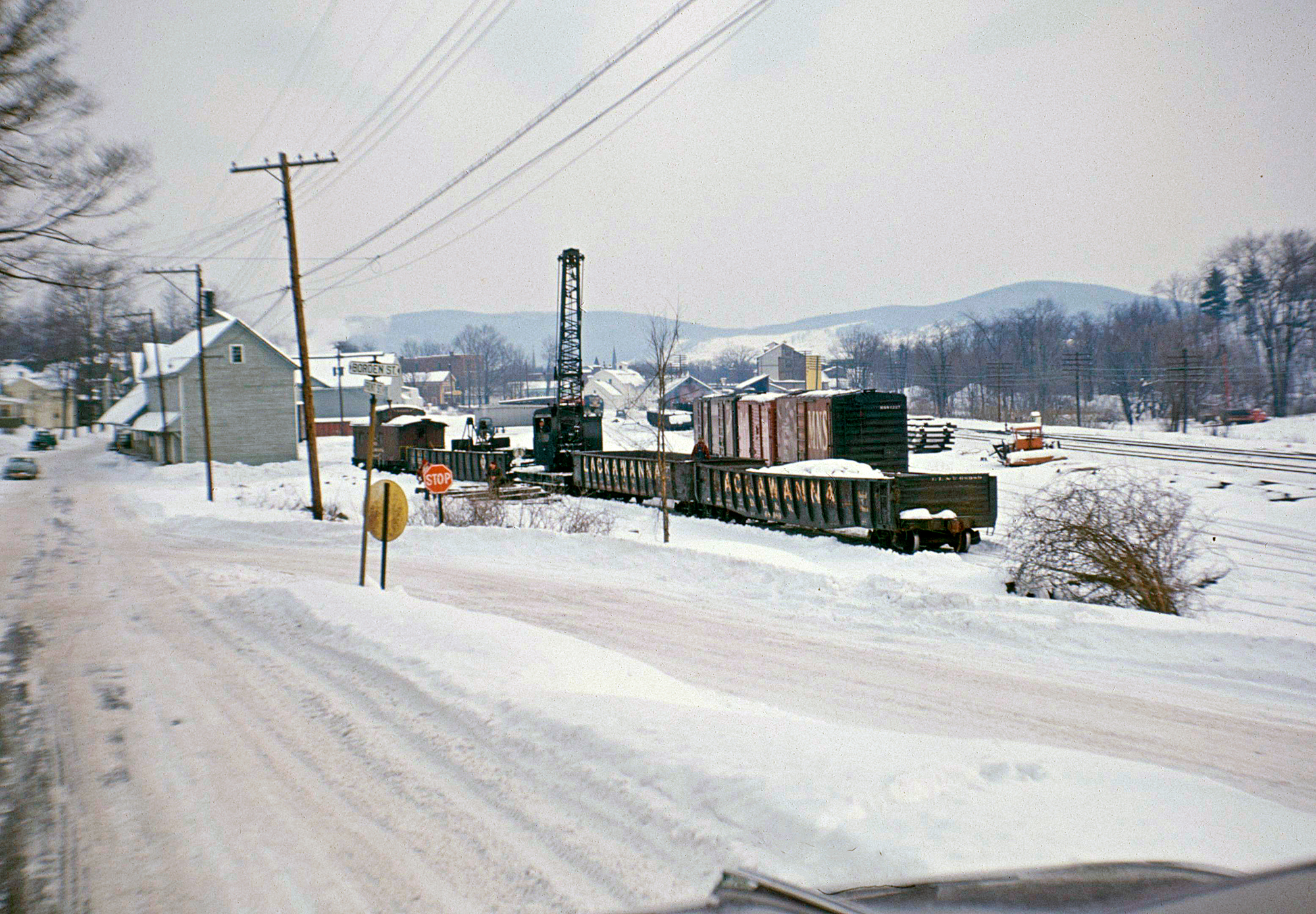 An Erie Lackawanna maintenance-of-way crane is seen here at work at the railroad's small yard in Deposit, New York during the early 1960s. The former Erie main line can be seen at right. American-Rails.com collection.

The most important aspect behind any rail maintenance-of-way program is keeping the track and right-of-way in working order.

During the industry's early days a wide variety of gauges were utilized ranging from two to six feet.  Eventually, the industry settled on the "Stephenson Gauge" (standard gauge) of 4 feet, 8 1/2 inches.

The use of such an odd width can be traced back to England, birthplace of the railroad.  In his book, "The American Freight Train," author Jim Boyd notes the country's early carriers, the Stockton & Darlington and Liverpool & Manchester, used this gauge.

It was based from the width of ancient Roman chariot roads found there.  The practice carried over to the United States and, like England, eventually adopted as its standard.

Before the railroad proved its worth as a fast and efficient mode of transportation a number of technological improvements were needed.

The first was the steam locomotive.  The book, "Railroads In The Days Of Steam" from the editors of American Heritage, points out American inventor Oliver Evans recognized the steam engine's capabilities. 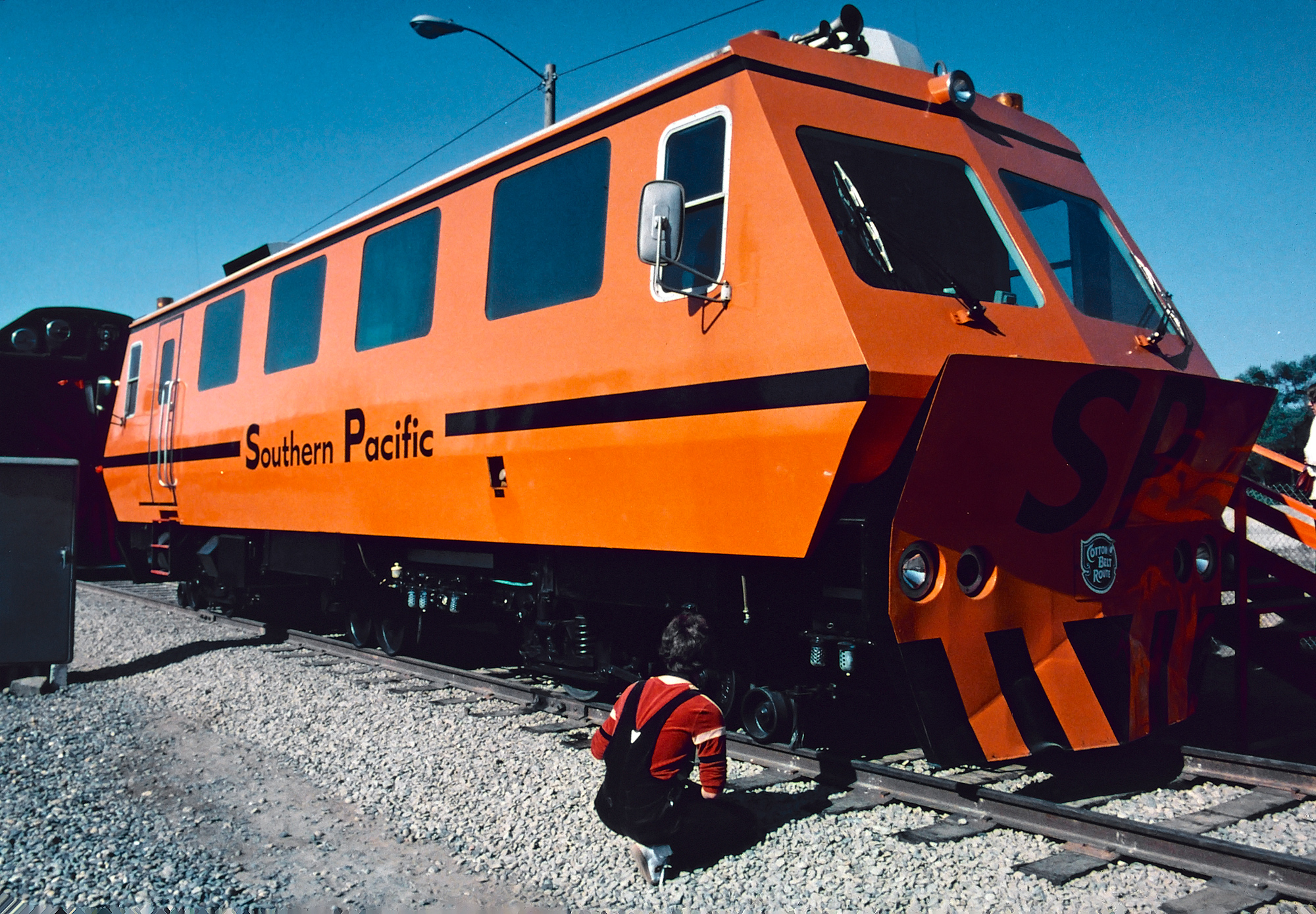 Southern Pacific track geometry car GC-1 (manufactured by Plasser-American),, on display at Railfair '81 in Sacramento during May of 1981. William Myers photo. American-Rails.com collection.

As early as 1813 he attempted to build a steam-powered carriage system connecting New York and Philadelphia.  It was to run on a wooden track structure and operate at speeds up to 15 mph.  Unfortunately, he died before having the chance to test his theory.

Nevertheless he is quoted as saying, "I do verily believe that carriages propelled by steam will come into general use, and travel at the rate of 300 miles a day."  His words proved incredibly accurate!

Colonel John Stevens went on to charter the first railroad in North America, the New Jersey Railroad Company in 1815, although it was not actually built until 1832.

He also tested the first type of steam locomotive in 1826, showcasing his "Steam Waggon" at his estate in Hoboken, New Jersey along a short stretch of track.  Several other advancements propelled the industry forward in both safety and speed such as the knuckle-coupler, air brake, iron "T"-rail, introduction of steel, and high capacity boilers.

Rail equipment is inherently heavy and as weights increased improvements were needed.  This led to the development of steel rails, sufficient ballasting, stronger bridges, and dense cross-ties made of hardwoods. 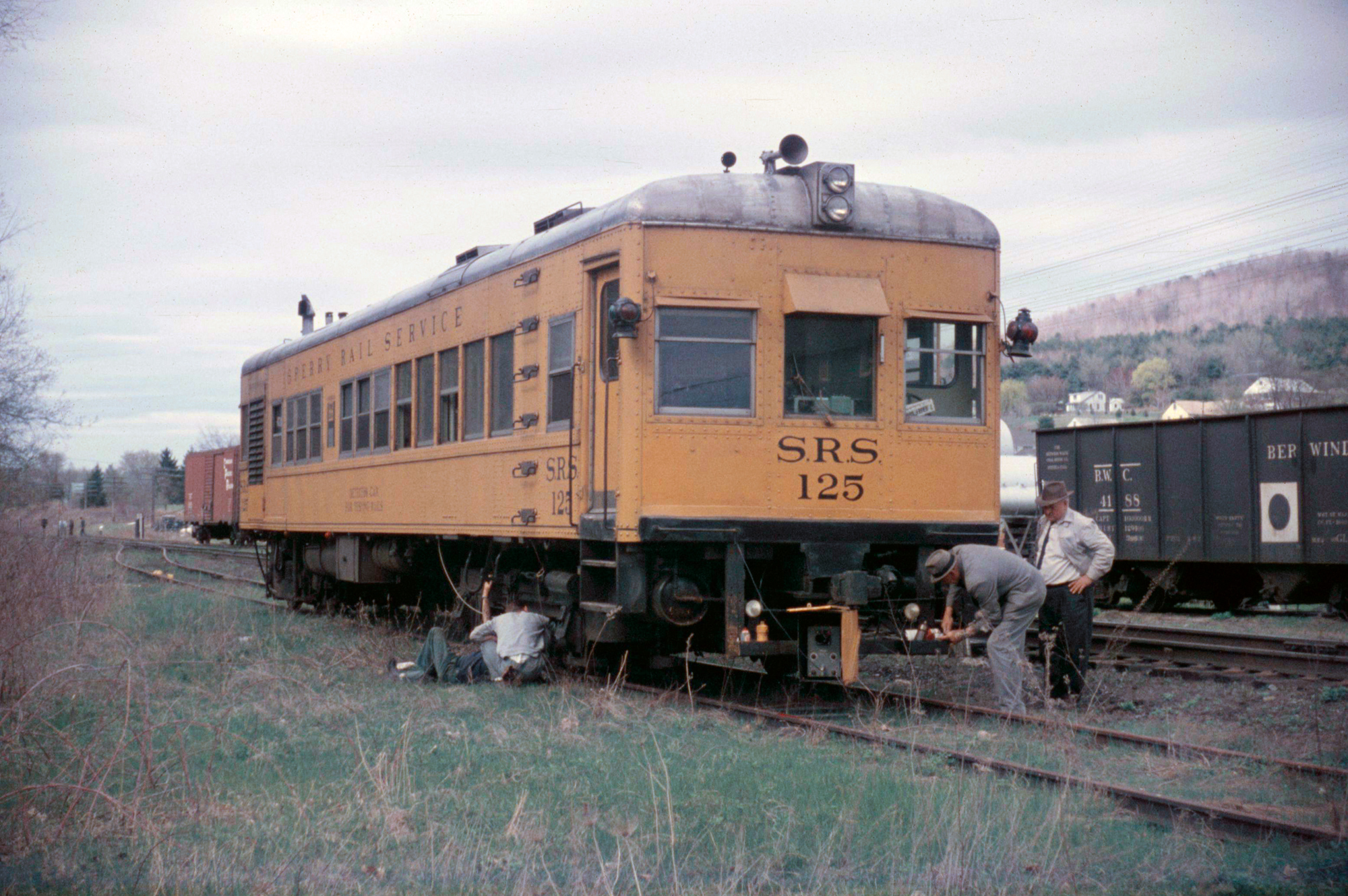 The ballasting and ties are just as important as the actual rails.  According to Brian Solomon's book, "Railway Maintenance: The Men And Machines That Keep The Railroads Running," ballast performs three primary functions; it acts as a stabilizer in keeping rails and ties firmly in place, distributes the weight evenly throughout the ties, and carries water away from the track structure.

The latter purpose is perhaps the most important.  Not only will rails rust and ties rot when exposed to water for long periods but its presence will eventually undermine the entire right-of-way.

Properly maintained trackage features ballast several inches above the roadbed, profiled at an angle towards ditches which carry away the water.

A well-manicured line is also free of grime, dirt, or other substances which could foul the ballast and prevent it from efficiently doing its job.  Crushed stone works best since it acts as a sieve while providing a good support base.

Like anything left in the weather ballast will acquire significant debris after years of exposure.  A machine known as a ballast cleaner carries a singular job of cleaning these stones, extending its life without the need of constant replacement. 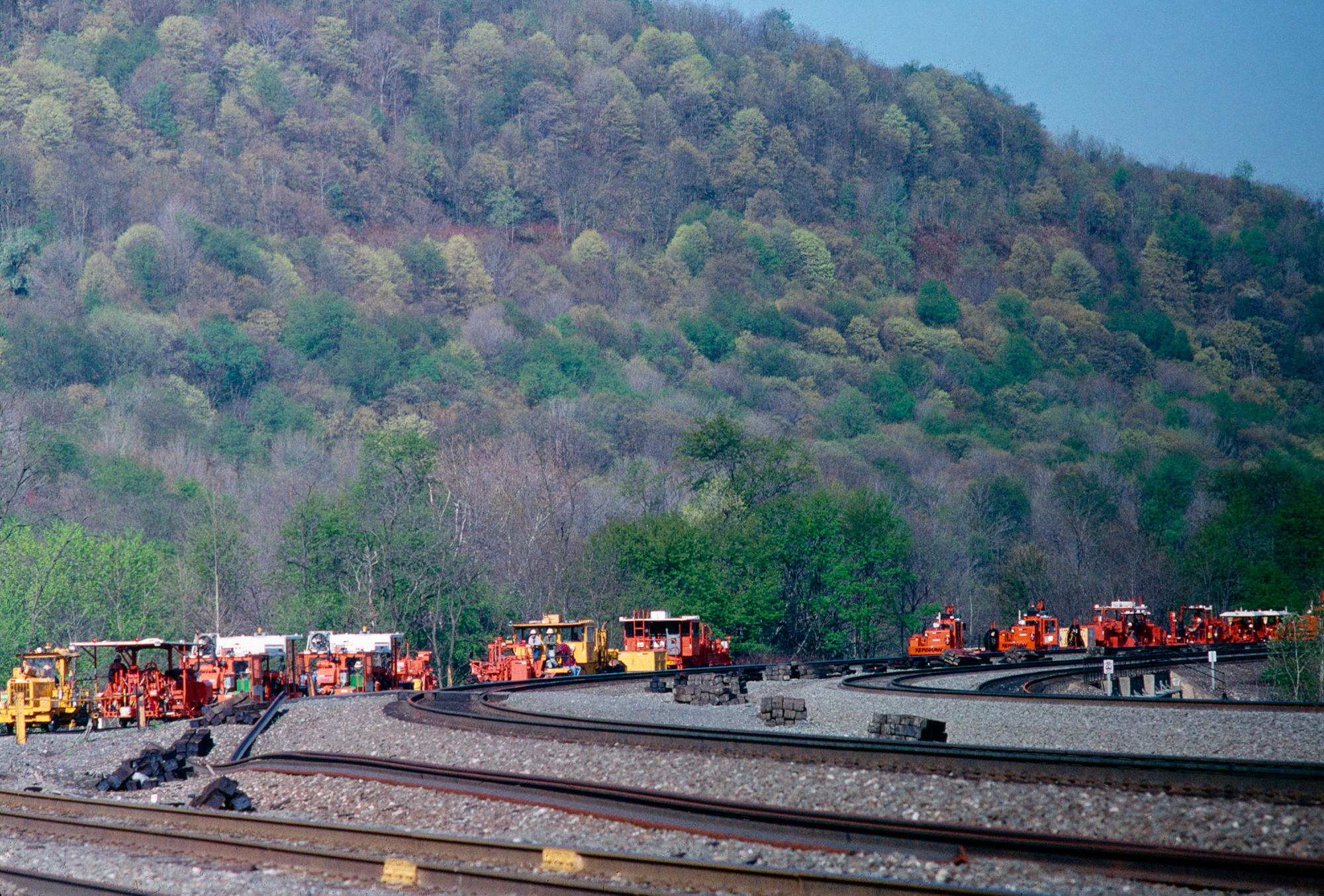 A Norfolk Southern track gang carries out a maintenance blitz along the former Pennsylvania Railroad main line at South Fork, Pennsylvania in April of 2000. American-Rails.com collection.

Before the invention of mechanized equipment the entire process was done by hand.  Crews would shovel out the stone (a tedious process that also meant digging out the rocks between the ties), then use a large screen to remove particulates.  Depending on the route not every line featured liberal use of expensive crushed stone.

On lightly used branches or secondary corridors sometimes spent coal (cinders) was substituted or in other cases very little, if any, ballasting could be found!

The most common type of cleaner is the shoulder ballast cleaner, which scopes up rock to each side of the track, cleans it onsite and then returns it to the right-of-way. However, as Mr. Solomon notes these machines only clean up to 40% of the ballast.

The remainder beneath the rails cannot be reached requiring a more powerful device known as an undercutter.  It will pick up the entire track, dig out the stone, and place everything in waiting trucks or hoppers to be carried away.

They tend to be used only when needed since the stone cannot be immediately cleaned and redeposited along the right-of-way. 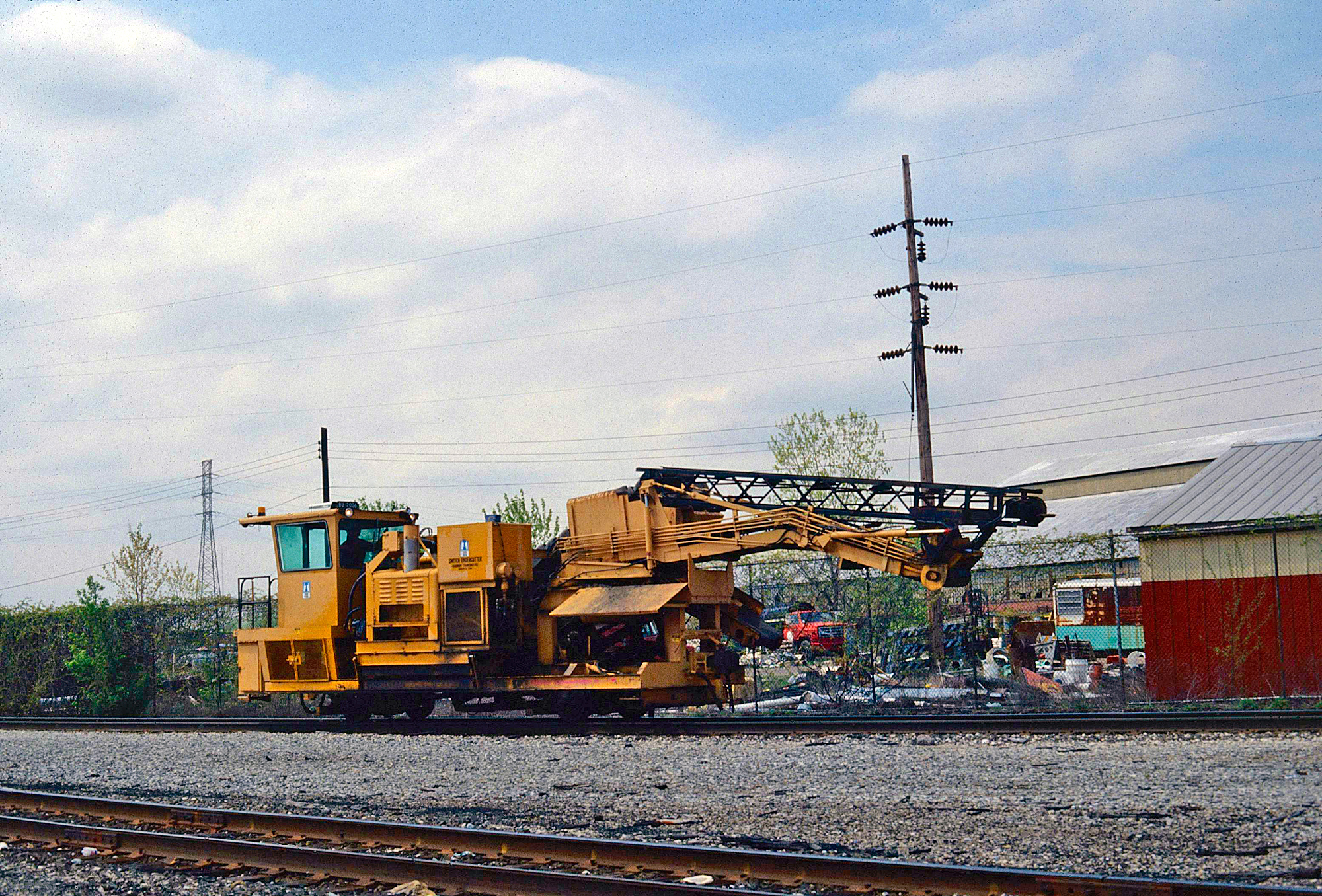 A Conrail switch undercutter at Air Line Junction in Toledo, Ohio; May, 1994. As its name suggests, this particular machine pulls up switches, and subsequently removes and cleans the ballast. American-Rails.com collection.

For years railroads used an army of employees, known as section hands, to keep a particular block of main line serviceable. Their responsibilities included everything from replacing worn ties and potentially broken rails to cleaning ditches.

Smaller railroads also occasionally boast their own arsenal of machines but usually contract out this work to companies like R.J. Corman, which began as a single-man operation in 1973 headed by Rick Corman.

He provided maintenance, via a solitary backhoe, for any railroad which would hire him.

Mr. Corman eventually built his empire into a massive operation that today includes short lines, dinner trains, equipment rentals, signal systems, and of course MOW services operating in 24 states.   For more reading about the types of maintenance equipment please visit the links above. 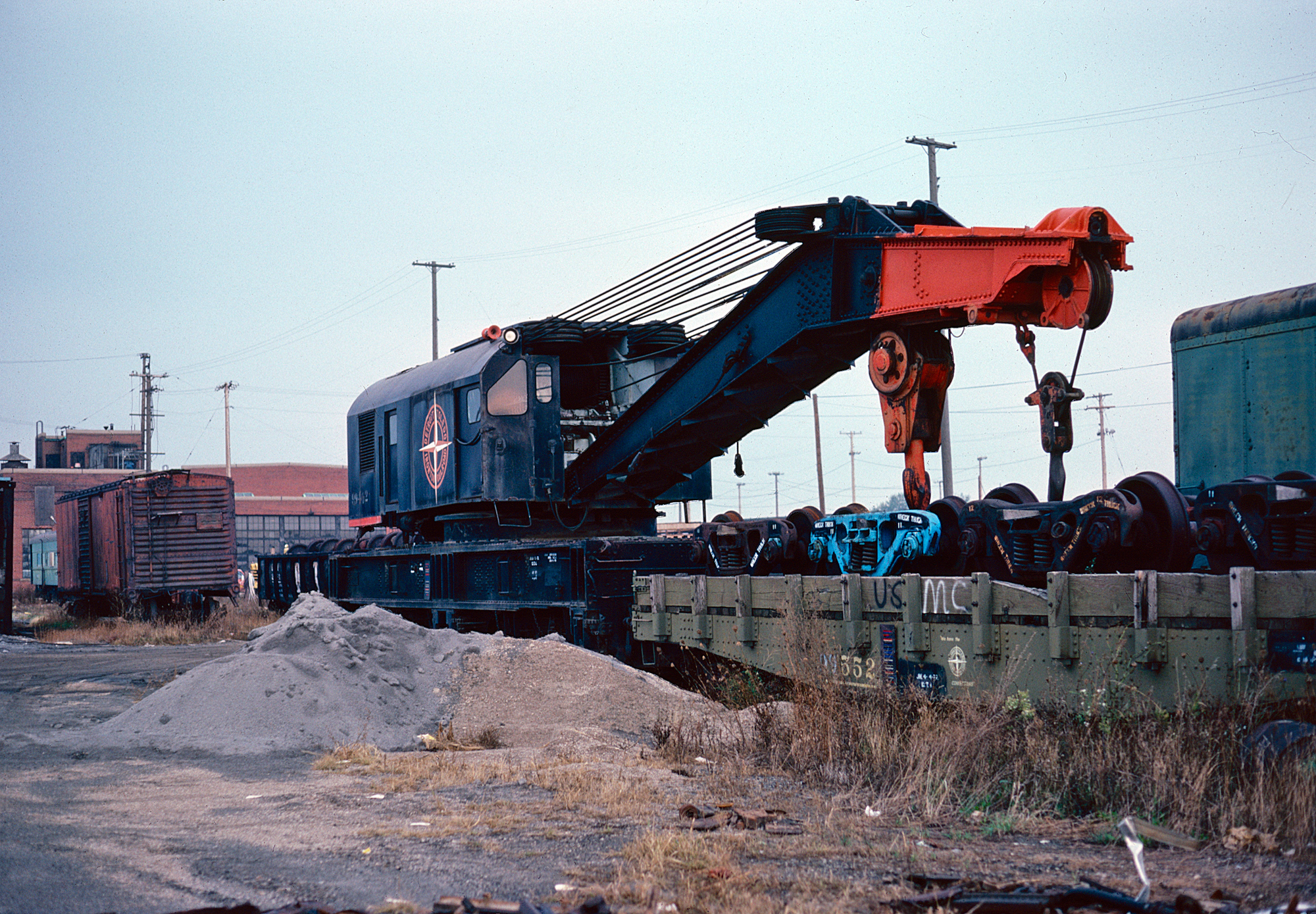 Detroit, Toledo & Ironton wrecking derrick #99402 is seen here stored in Flat Rock, Michigan in September, 1982. As their name suggest, these steam-powered machines were regularly used years ago to clean up derailments and wrecks. American-Rails.com collection.

Beyond physical tasks is the complex maintenance of the rail.  Known as ultrasonic and induction testing companies such as Sperry Rail Service are contracted to find the tiniest of cracks within the rail to prevent potential disasters and derailments.

Defect detection cars have greatly advanced in their ability to find these problems although their use can be traced back to the early 20th century.

If such issues are not constantly monitored an accident is only a matter of time.  When a crack forms the rail will eventually give out and a derailment will occur.

As railroads progress into the future infrastructure components of today will almost certainly become obsolete like the tell-tale, roundhouse, and interlocking tower.

But, important components like the rails, ties, and ballasting most likely will not change much over the next century just as they haven't during the past 100 years.