Tie extractors/inserters (since the machine can both pull ties from beneath the rail as well as re-insert new ties) have greatly improved the efficiencies by which railroads can maintain their infrastructure and replace ties.

Tie extractors/inserters have been in use for several decades now and today come in a wide range of models, depending on what type of job they are being asked to perform.

For instance, there are small, singe-operated models to do quick maintenance work while very large models are available to replace and relay ties very quickly (usually these are employed when entire section of main line is being overhauled). 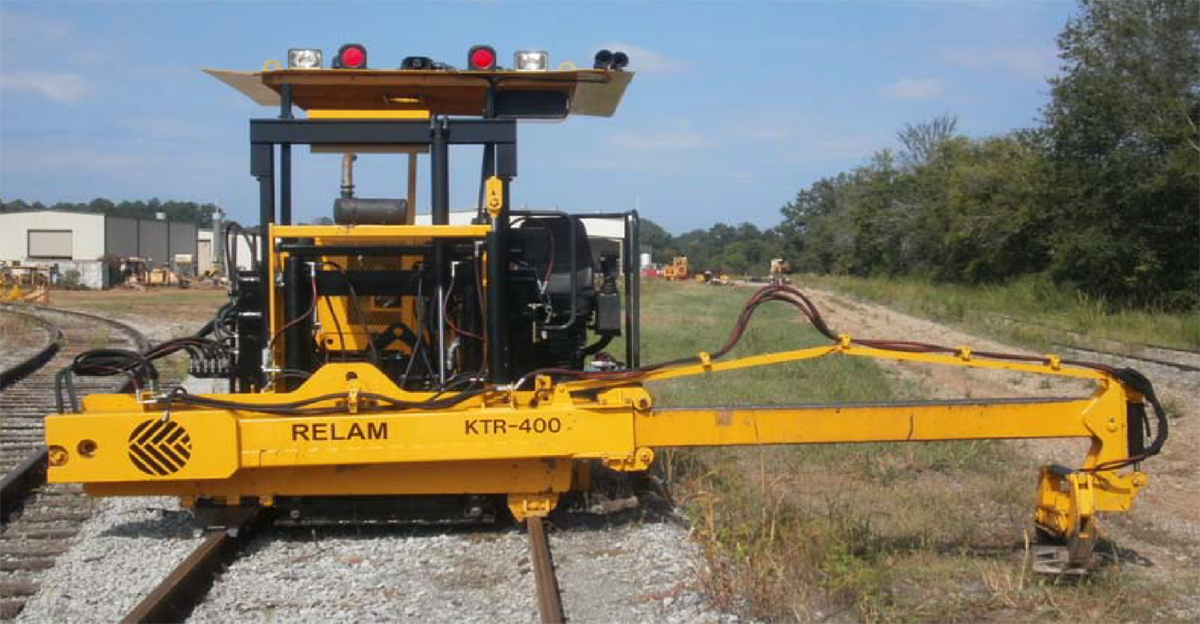 Railroad tie extractors/inserters almost always work as some kind of mechanized gang, usually as part of a tie gang (which today normally consists of an army of machines, not men).

As it is, tie gangs may look like machines simply heading off to work in an elephant line. However, they are actually very coordinated work details with each machine and accompanying operator assigned a very specific task to get the work done as quickly as possible.

The reason for speed and hastiness in finishing a maintenance job is simply, to keep the trains and goods moving. Delays are quite costly and avoided at all costs because if the freight isn't delivered the railroad's don't get paid! 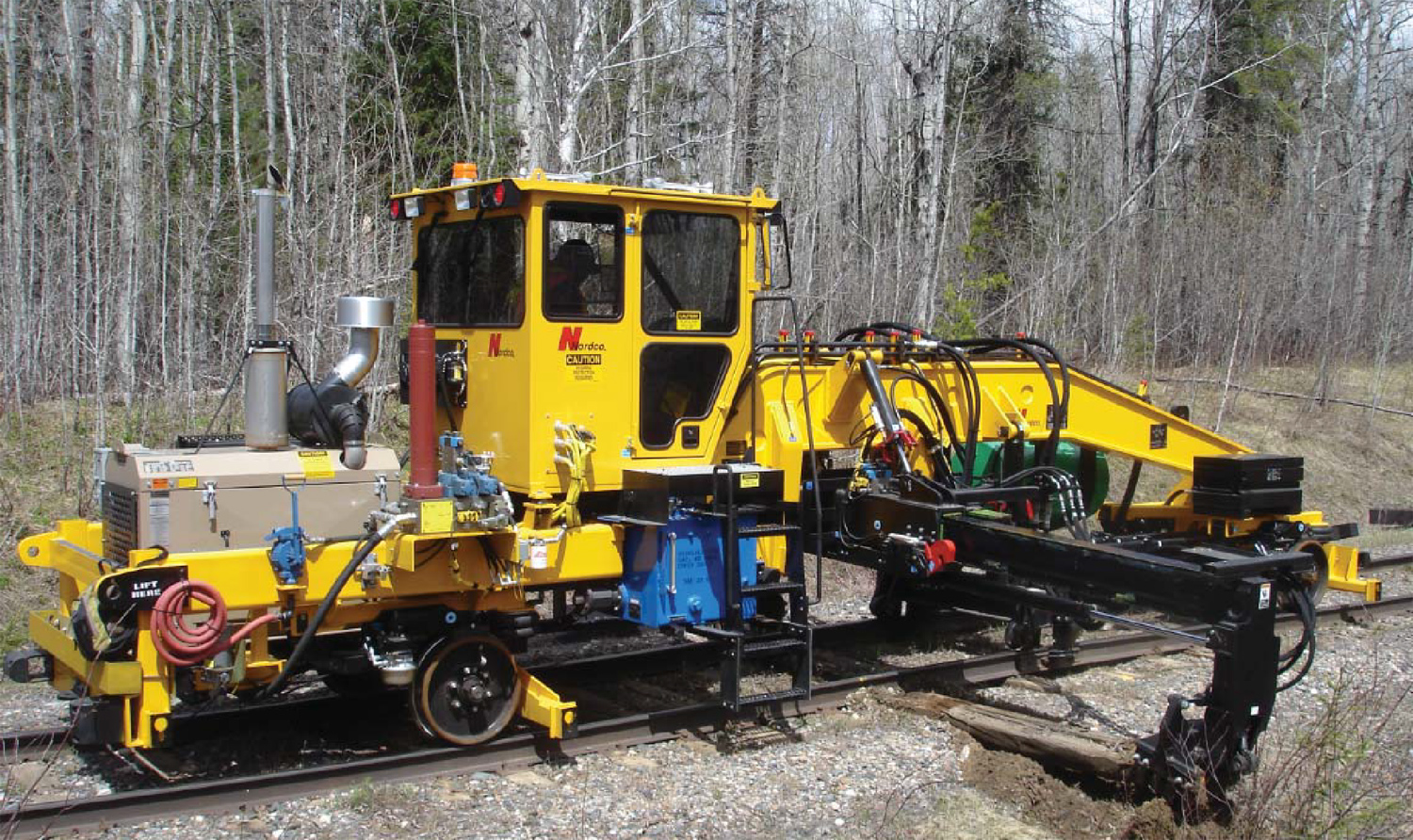 Railroad tie extractors/inserters, like most maintenance equipment used in the industry, have little symmetry to them and all of the working parts are exposed and on display for all to see (which do make them interesting to watch as an observer).

Using hydraulics to accomplish the heavy lifting and pulling a single-operated tie extractor today can remove as many as seven ties a minute.

Compare this to the days when railroad maintenance required armies of men to remove spent ties using tongs and shovels, and everything was done by hand.

To remove a used today today, typical railroad tie extractor, even a small model, will apply nearly 40,000 pounds of force to the rail (lifting it so the machine can free the tie as well as nearly 20,000 pounds to the tie itself to pull it free.

If the job is small the same machine will replace the tie but if a large section of main line is being overhauled the tie relaying machine will be employed.

According to Brian Solomon's Railway Maintenance: "In order to remove a tie, the machine clamps on to the rails, and lifts the track slightly with hydraulic jacks.

A hydraulically controlled telescoping boom then grips the tie from the end and pulls it out.

Since ties can become angled, the boom is able to rotate right or left 10 to 20 degrees off axis from a hypothetical perpendicular in order to grab any wayward ties.

Additionally, when at work these machines are designed to disrupt the right-of-way as little as possible since the line is expected to be ready for service again after the work is completed. 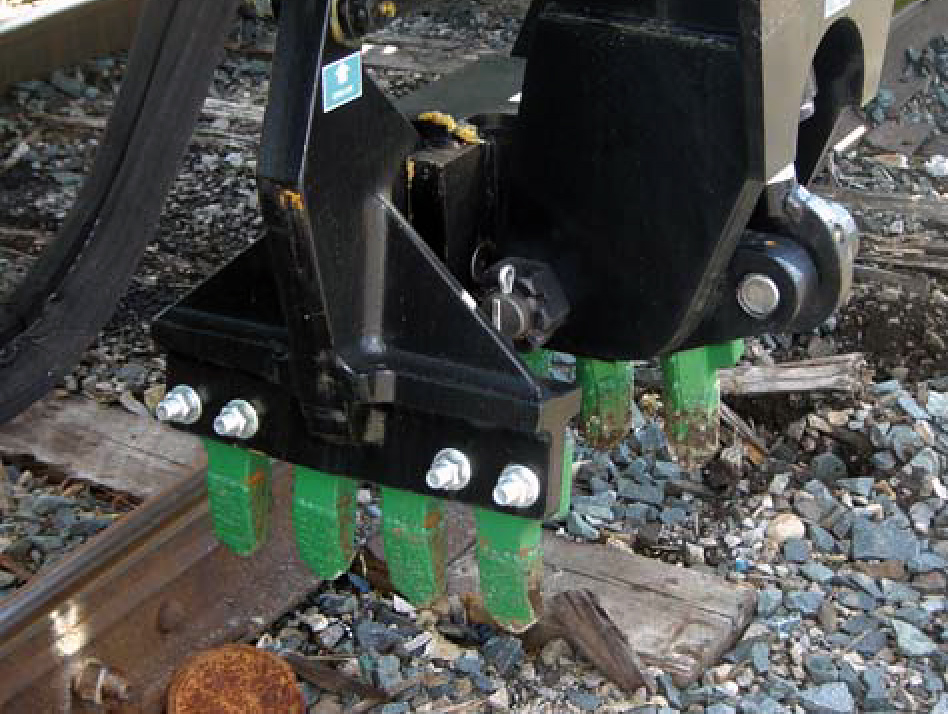 Of course, before the days of tie extractors and inserters, or any type of mechanized equipment at all for that matter, railroads were forced to rely on the brute strength of section men to pull and replace ties using standard hand tools such as track jacks, rods, crowbars, and tie tongs.

This meant pulling spikes by hand to release the tie, lifting the rail up with hand jacks, digging out all of the ballast (stone) by hand, and finally pulling out the tie itself with the aforementioned tongs.

Needless to say this required an incredible amount of time and forced railroads for many years to employ thousands and thousands of employees working as track gangs to keep up with maintenance.

Today, there are several different manufacturers of extractors/inserters although one of the leading companies is Harsco Rail, which builds a wide variety of MOW equipment.