Railroad Infrastructure, The Backbone Of How Trains Operate

The most important component of any railroad, in addition to its employees, is the infrastructure.

The term generally refers to elements either comprising the right-of-way (such as ballast, ties, track, bridges, and tunnels) or adjacent to it (line-side structures like signs, mileposts, switches, etc.).

Also included within this subject are signaling systems and the classic tell-tales. Modernity and new technologies have caused some to vanish. Take, for instance, the tell-tale. This interesting device was once a lifesaving tool for brakemen.

During a time when these men defied death by catwalking freight car rooftops, the apparatus acted as an early warning system (using rope or light chain) of impending low-clearances.  Once the automatic air brake was invented in 1868 the use of the tell-tale slowly faded.

Interestingly, brakeman continued to walk rooftops well into the 20th century before the practice was finally banned.   This section will provide a general history of the industry's infrastructure, covering each specific type ranging from ballasting to interlocking towers. 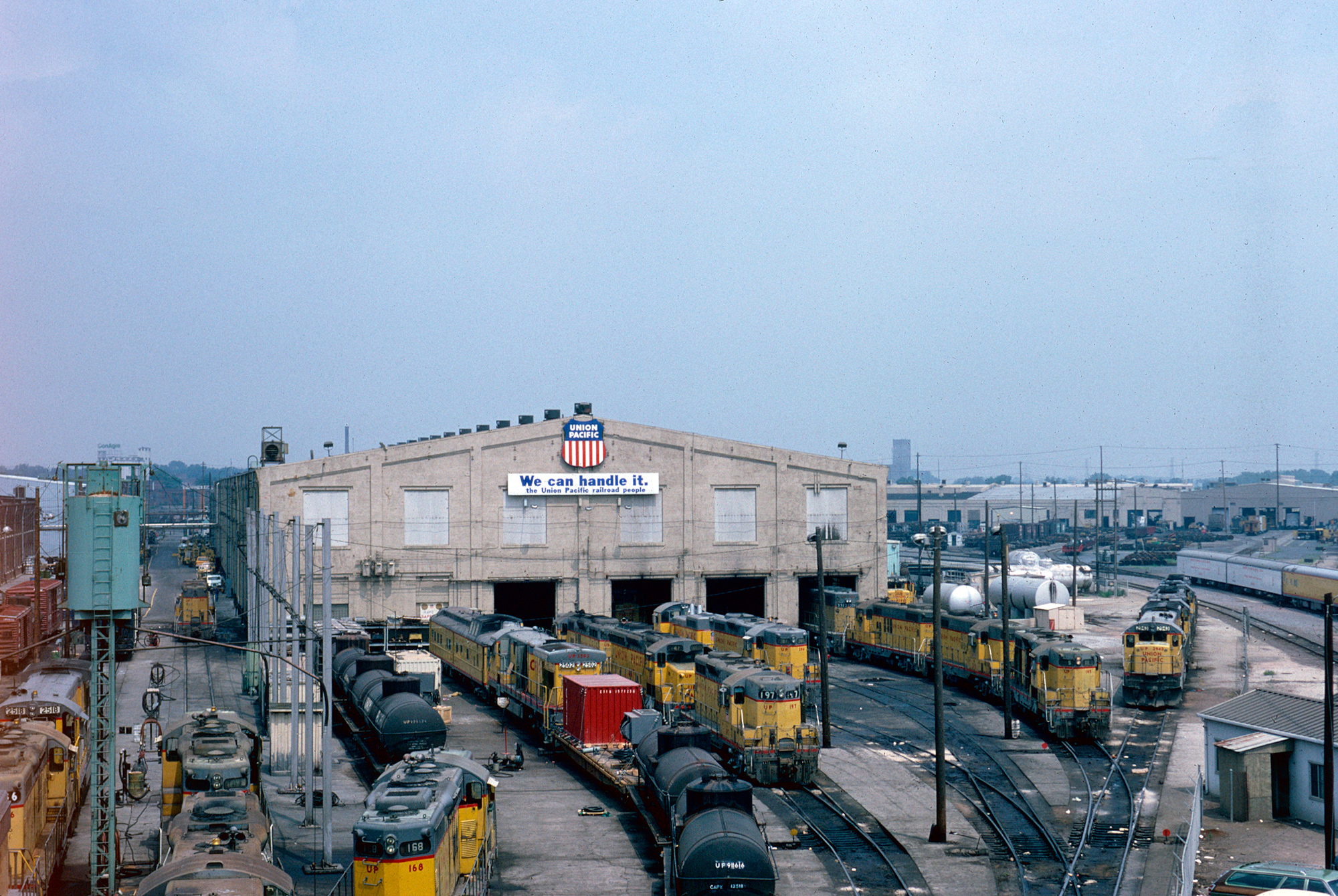 Union Pacific's shops in Omaha, Nebraska; June, 1981. This facility was closed in 1988 to make way for a convention center. American-Rails.com collection.

Nothing is quite as important to a railroad as the track.  Without the rails, ties, and ballasting the idea of moving freight and passengers is entirely academic.

Following these components are auxiliary structures for safer and efficient operation such as signals and wayside signs.  The track can trace its heritage to England, birthplace of the railroad.

According to Brian Solomon's book, "Railway Maintenance: The Men And Machines That Keep The Railroads Running," the earliest known use of track occurred on English tramways in the early 19th century.

Noted historian, the late Jim Boyd, delves further into the subject within his book, "The American Freight Train," by  noting one of the region's earliest was the Swansea & Mumbles, a six-mile, horse-powered operation that opened in Whales during 1804.

It was designed to move coal from a mine to nearby deep water port.  Then, in September of 1825 the steam-powered, Stockton & Darlington began service on a standard-gauged right-of-way of 4-feet, 8 1/2-inches.

The width was based upon ancient Roman chariot roads and championed by locomotive builders George and Robert Stephenson, earning it the name "Stephenson Gauge."

A few years after the Stockton & Darlington opened railroads began appearing in the United States.  The Granite Railway of Massachusetts is credited as the very first.

It opened on October 7, 1826 operating a 3-mile route to haul granite from a quarry at Quincy to a dock on the Neponset River at Milton.

It used early strap-iron rails, which featured a wooden base, atop which was placed thin strips of iron for increased strength.  In this era virtually everything about railroading was an experiment and learned on the fly. 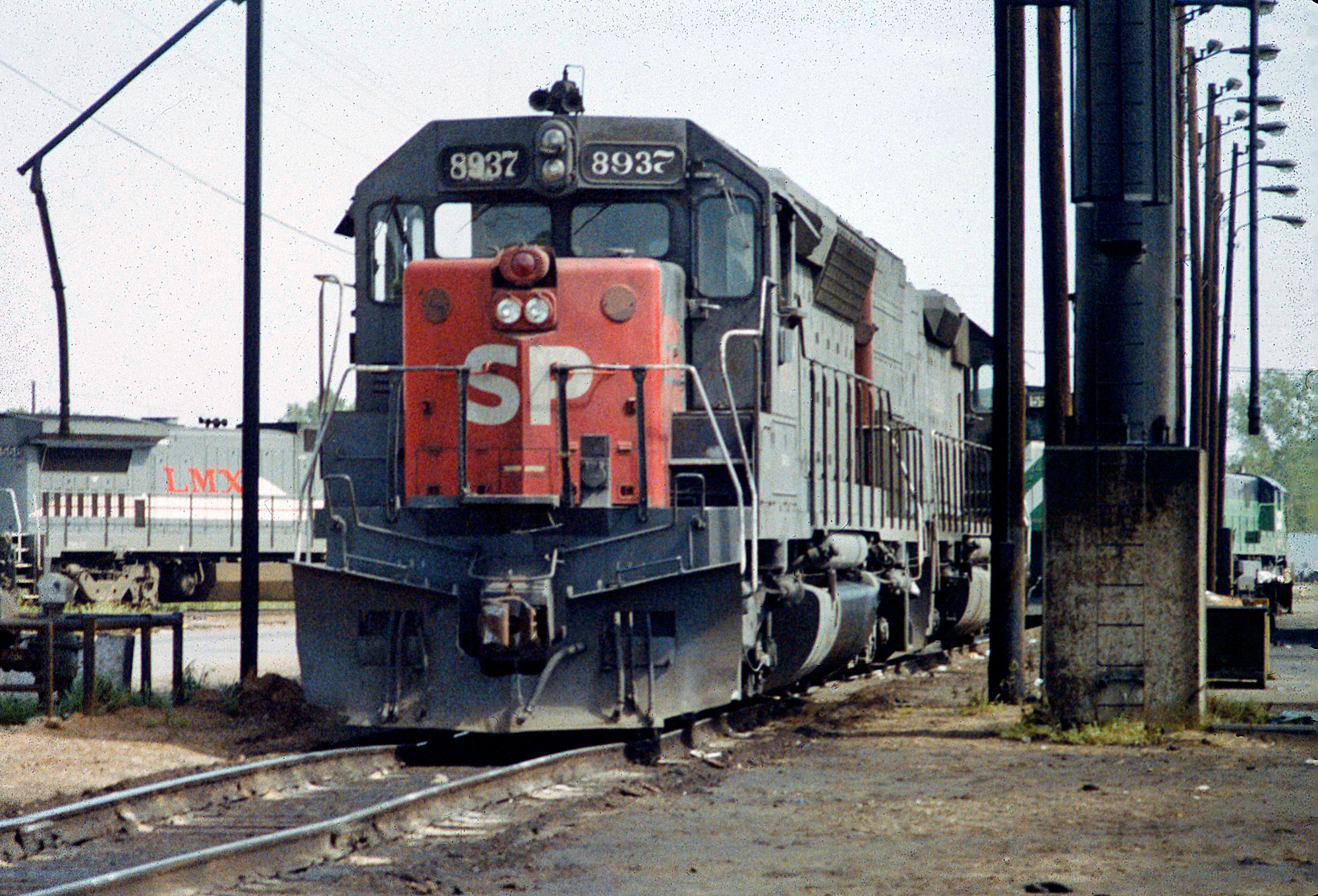 Southern Pacific SD45 #8937 on the sanding rack. No date or location listed (based on that LMX B39-8E in the background, probably late 1980s or very early 1990s). American-Rails.com collection.

Early on, the strap-iron method proved the best while the supporting base was another matter.  At first, the idea of stone was used and, while extremely durable, it was simply too expensive to employ on a wide scale.

Engineers eventually learned that dense hardwoods, like oak, proved the most economical.  Today's cross-ties are at least 8-10 inches thick and about 8-10 feet in length, depending on their particular use. 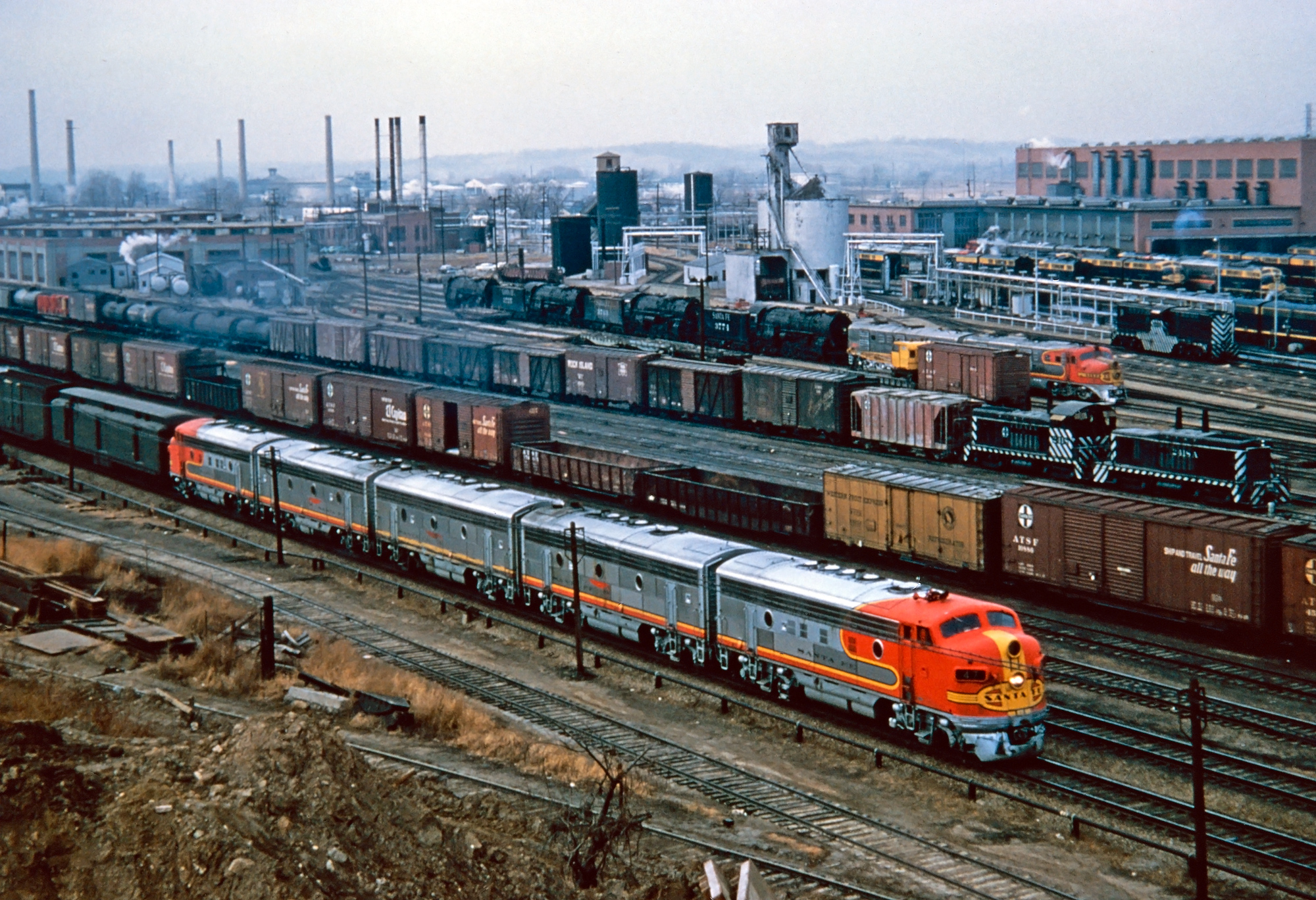 In time, strap-iron rails fell out of favor as they were deemed too dangerous although some railroads continued employing them even after solid iron, "T"-rail had been introduced.

The strap-iron had a tendency to pry loose, a phenomenon dubbed the "snake head."  Once a car passed over a worn end it would peel upwards and tear through a car's wooden under-frame.

Many passengers, and sometimes crewmen, were maimed or killed in these incidents.  John Stover notes in his book, "The Routledge Historical Atlas Of The American Railroads," the solid iron "T"-rail is credited to Robert Stevens president of the Camden & Amboy Railroad.

It was a revolutionary design that is still used to this day.  The rail looked like a capital "T," only inverted; the top was placed on the ground which provided a solid base of support while the narrow end was the wheel's guideway.

With the development of steel some decades later this stronger material replaced iron in all aspects of railroading (bridges, rail, car construction, etc.).  Interestingly, even today,  some lightly used branch lines can still be found carrying rail rolled during the late 19th century. 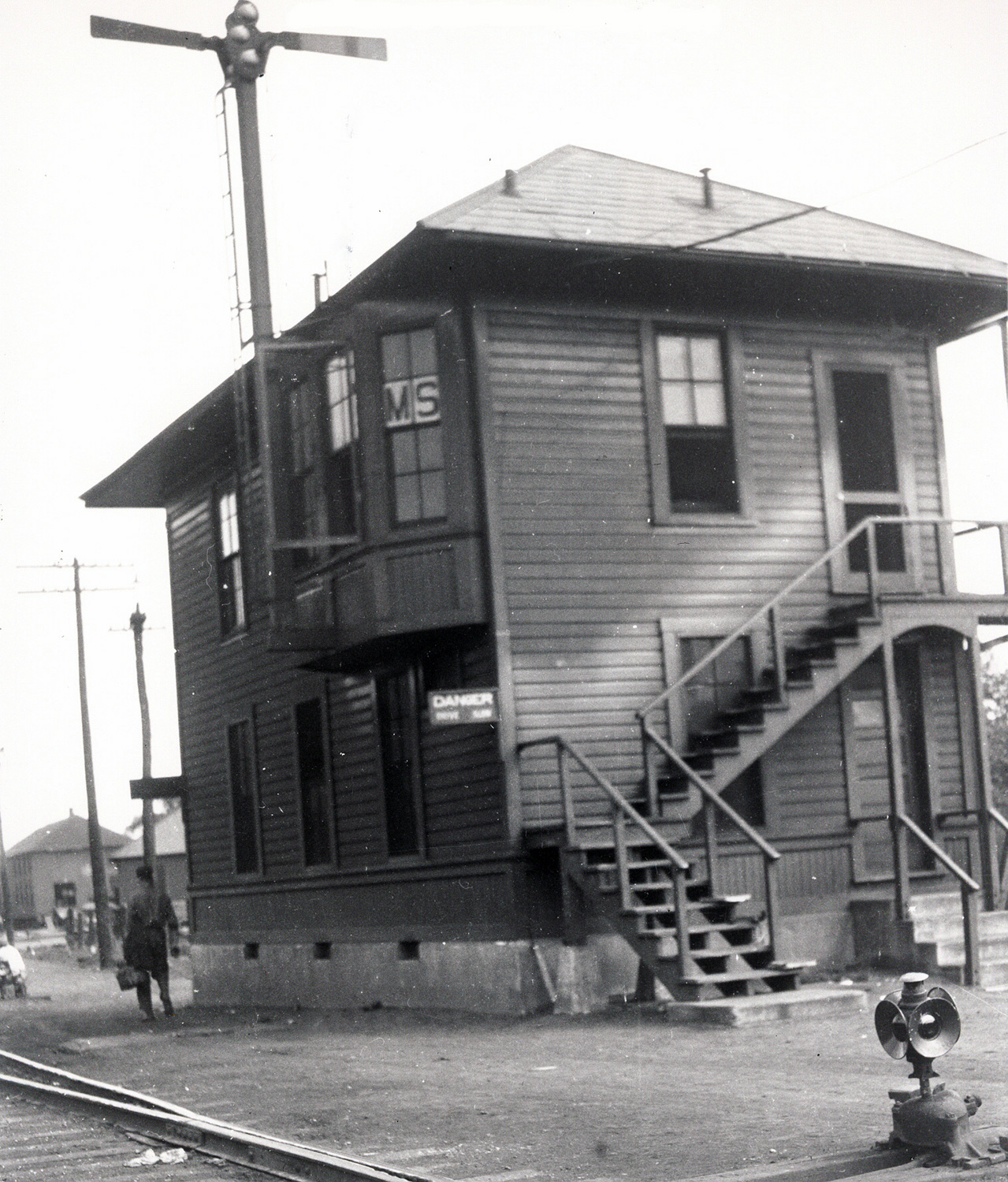 Ballast, usually in the form of crushed stone, provides another important component of the road bed. While essentially just gravel it plays a vital role, increasing the lateral strength of ties and rails while acting as a drainage system.  The ties are situated firmly in the stone, which is sloped away and towards ditches which catch water runoff.

While crushed stone, usually either limestone or quartz, is the aggregate of choice today in years past everything from slag to cinders was used.

To be most effective ballast must be regularly cleaned or replaced.  As dirt and grime builds up around the rock its ability to effectively drain water is reduced.

Ballast has its earliest beginnings as simple limestone blocks, which sometimes pulled double duty as both the support base and track structure. In the 1840s true ballast, or crushed stone as we know it today, became common as engineer's realized it was superior to the old method.

The track may keep the trains moving but other important components like bridges and signals also hold great importance; according to Brian Solomon's book, "Railroad Signaling," the latter of which can be traced back to 1832 and the New Castle & Frenchtown Railroad. 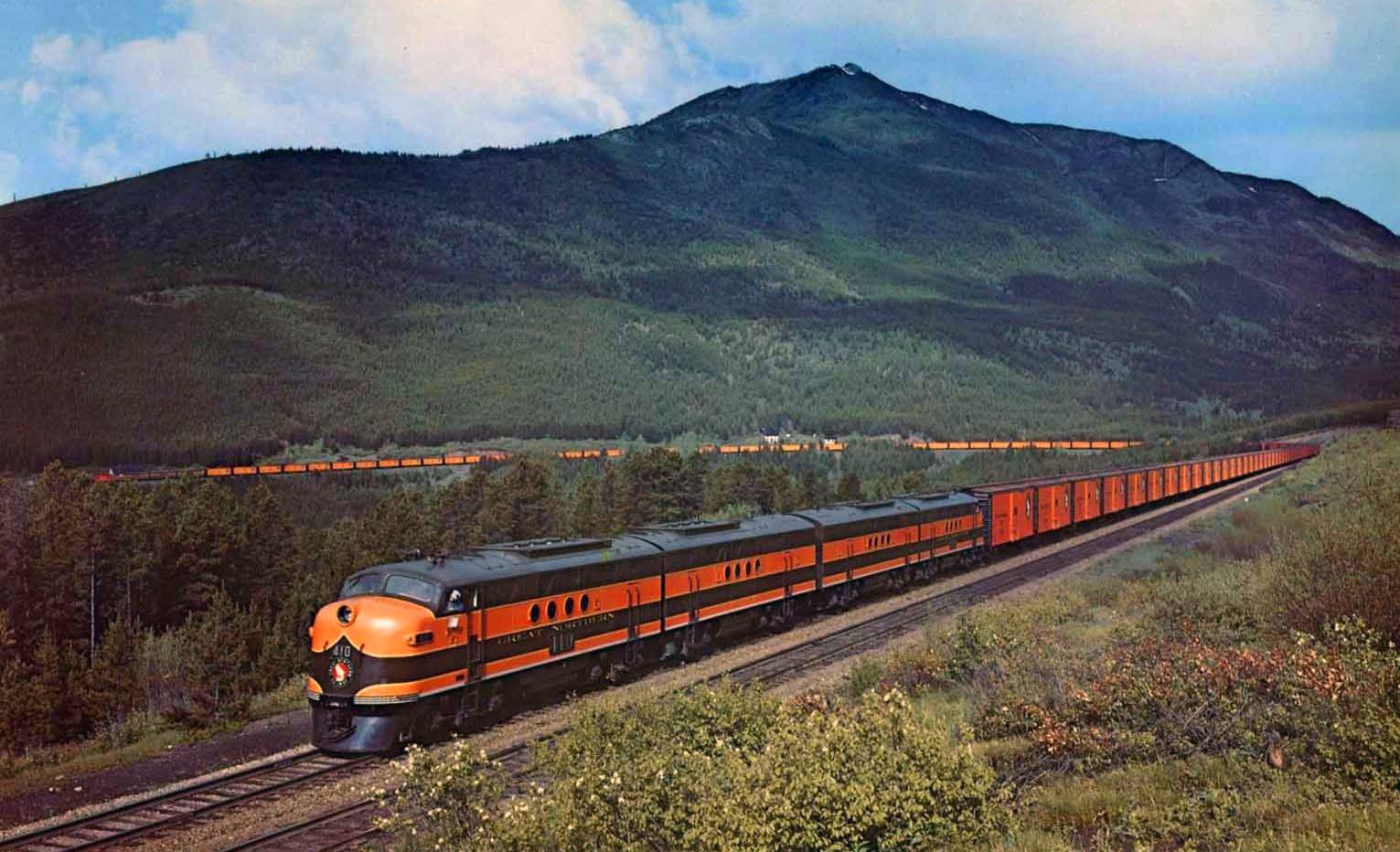 It used a type of white and black ball system, hoisted high above stations from masts to indicate when a train had left.

With the invention of the track circuit by William Robinson in 1872 the idea of signals being used to safely and effectively govern trains was realized.  His concept enabled the detection of a train within a block (segment) of trackage by using the steel rail's natural conductivity.

It also allowed for the governance of train movements, thus the automatic block signal (ABS) was born.  He successfully tested his idea on the Philadelphia & Erie at Kinzua, Pennsylvania in 1870 and patented it two years later.

The early, and later established, company in the field of ABS (and signaling in general) was Union Switch & Signal, formed by George Westinghouse in 1881.

Today US&S is part of Ansaldo STS, an Italian company.   Finally, bridges can trace their roots back to the industry's beginnings in the mid-19th century.

Early examples were built of stone, forming impressively grand arched viaducts.  They were so well-built, like Thomas Viaduct (1835) and Starrucca Viaduct (1848), that many still carry trains to this day.