Wayside signs were once a common sight along the railroad tracks and to some extent still are today.

In the classic era, each company had their own style of wayside signs they used although one which became universal was the whistle post.

This particular sign was typically a concrete post around 4 feet tall with a large "W" engraved or painted on it informing railroad engineers to begin sounding the whistle (in the diesel era it is the air horn) at that location.

Today, if you pay attention to structures lining the railroad tracks you may notice signs that say "Begin DTC Block" or "End DTC Block" which simply refers to what type of dispatching system controls the railroad line. 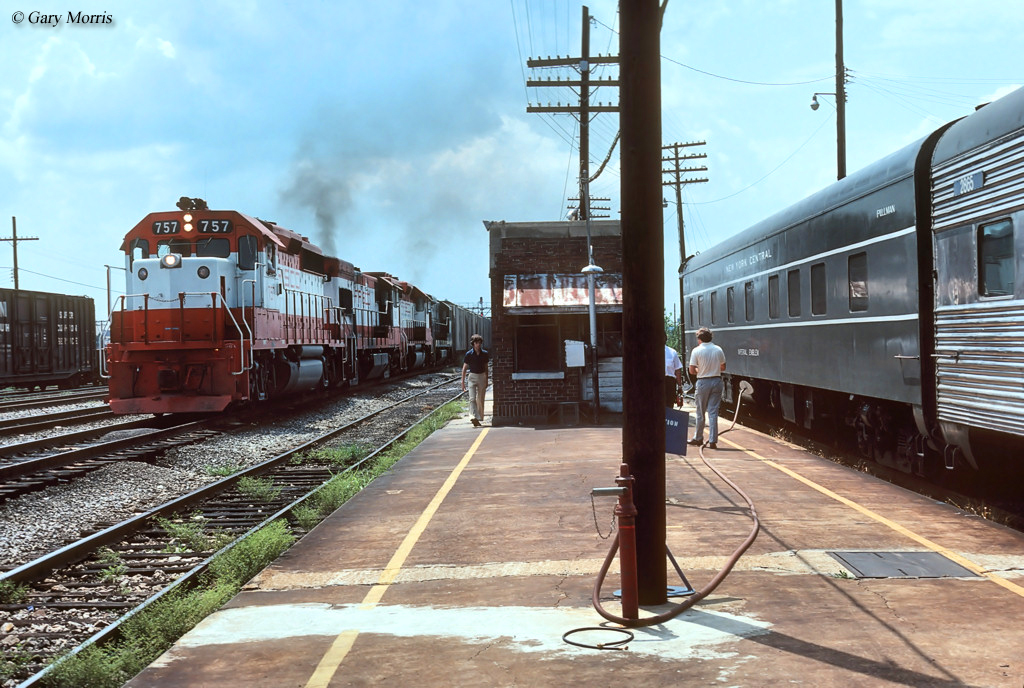 Wayside signs have long been an added communication device railroads have employed to convey a certain messages, especially those that are constant and should always be heeded once a train enters a certain area or location.

For instance, on approach to a railroad yard trains will usually pass a sign that says something to the effect of "Yard Limits" or "Now Entering Yard Limits."

These terms mean the train must always operate at a greatly reduced speed while inside the yard and always be on the lookout for other trains, cars, personnel, and switch engines (locomotives which work exclusively in railroad yards kicking freight cars). 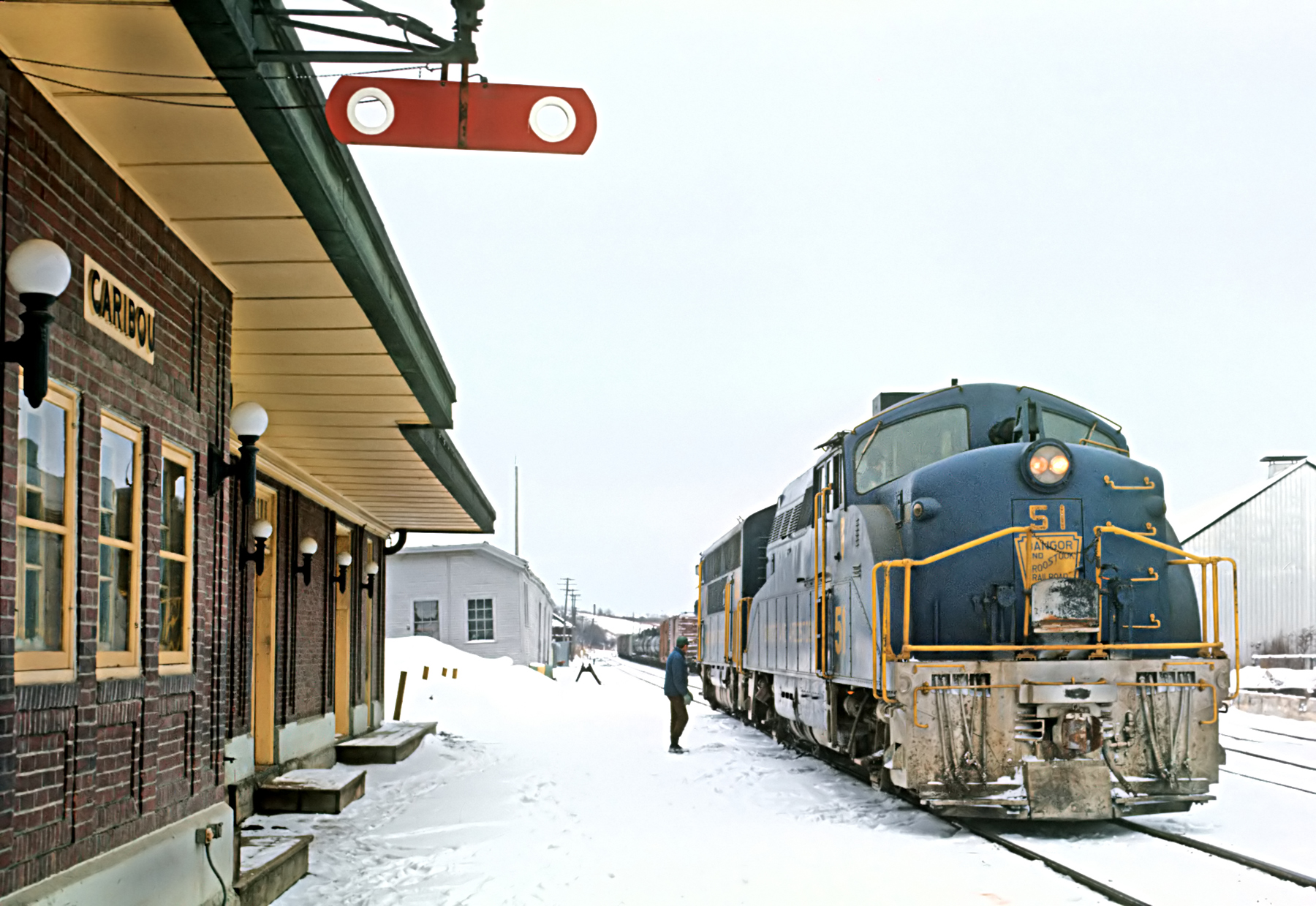 A Bangor & Aroostook BL2 and F3A are picking up freight "First 58" at Caribou, Maine on February 6, 1970. Note the station's order board; while the semaphore type was the most common there were many variants, such as that used on the BAR. Some railroads also went with a lighted signal-type system. Roger Puta photo.

As mentioned above the whistle post is likely the most famous of the wayside railroad signs, indicating to the engineer when to sound his whistle.

Other classic railroad signs include: 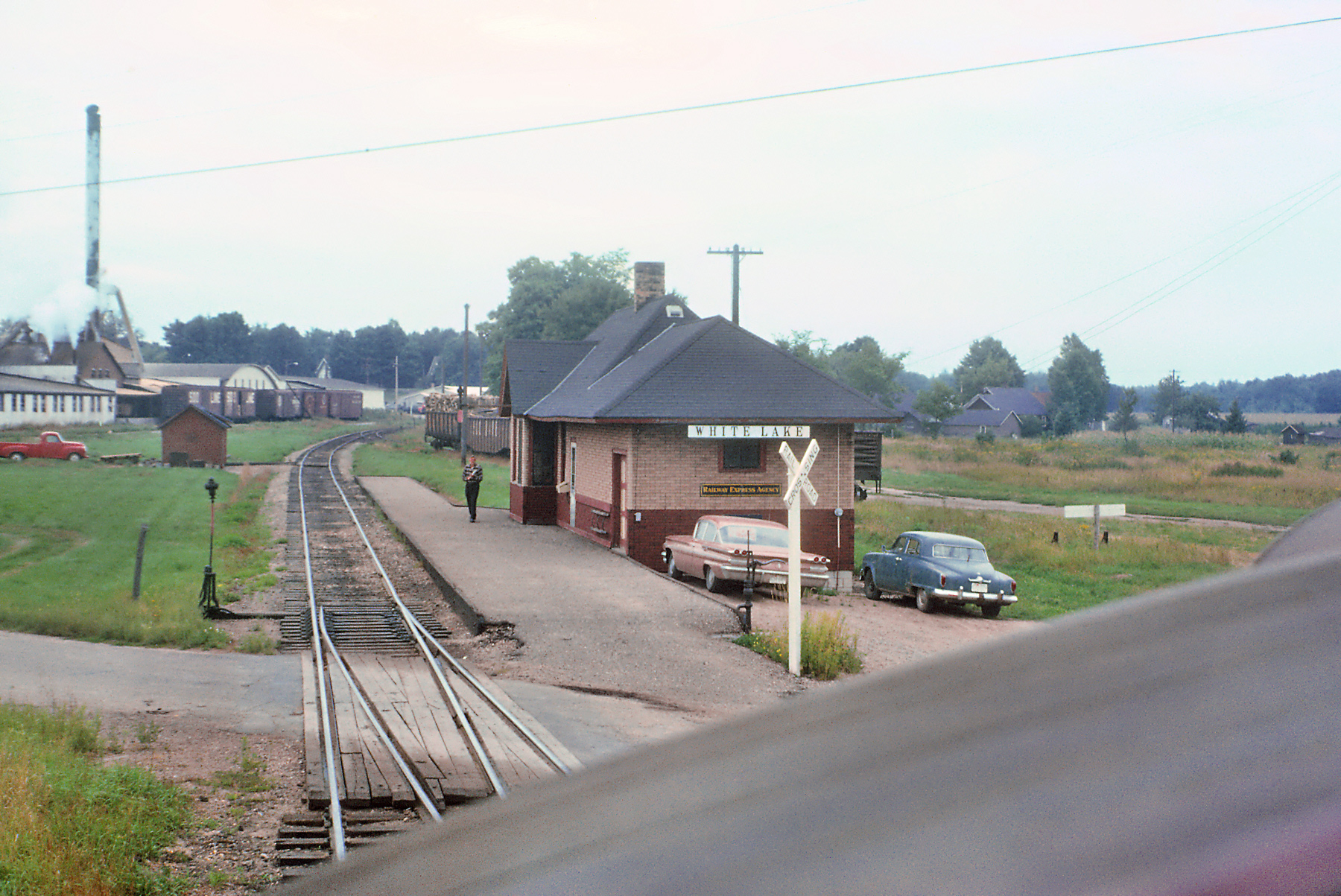 Roger Puta captured this scene from the fireman's side of the cab of a Soo Line F unit heading northbound through White Lake, Wisconsin in September, 1963. The train is about to cross Bissell Street at the north end of the town's short siding. Note the switch stand on the left, indicating the main line is open. Manufacturers used different methods to signify whether a switch was open or closed. Most often it was some form of red (switch is open) or green (switch is closed) placard/signal. Today, many switch stands are automated but the basic green/red indicators (usually lit) remain. The Soo Line here is long gone, including the depot.

It should be noted that railroad signals should not be confused as wayside railroad signs, they perform a completely different function.

Signals have their beginnings dating back to the industry's infancy itself with the famed ball-type signal. Perhaps, though, the most famous signal-type of all was the semaphore, which came into use in the mid-19th century and even today can still be found in regular service! 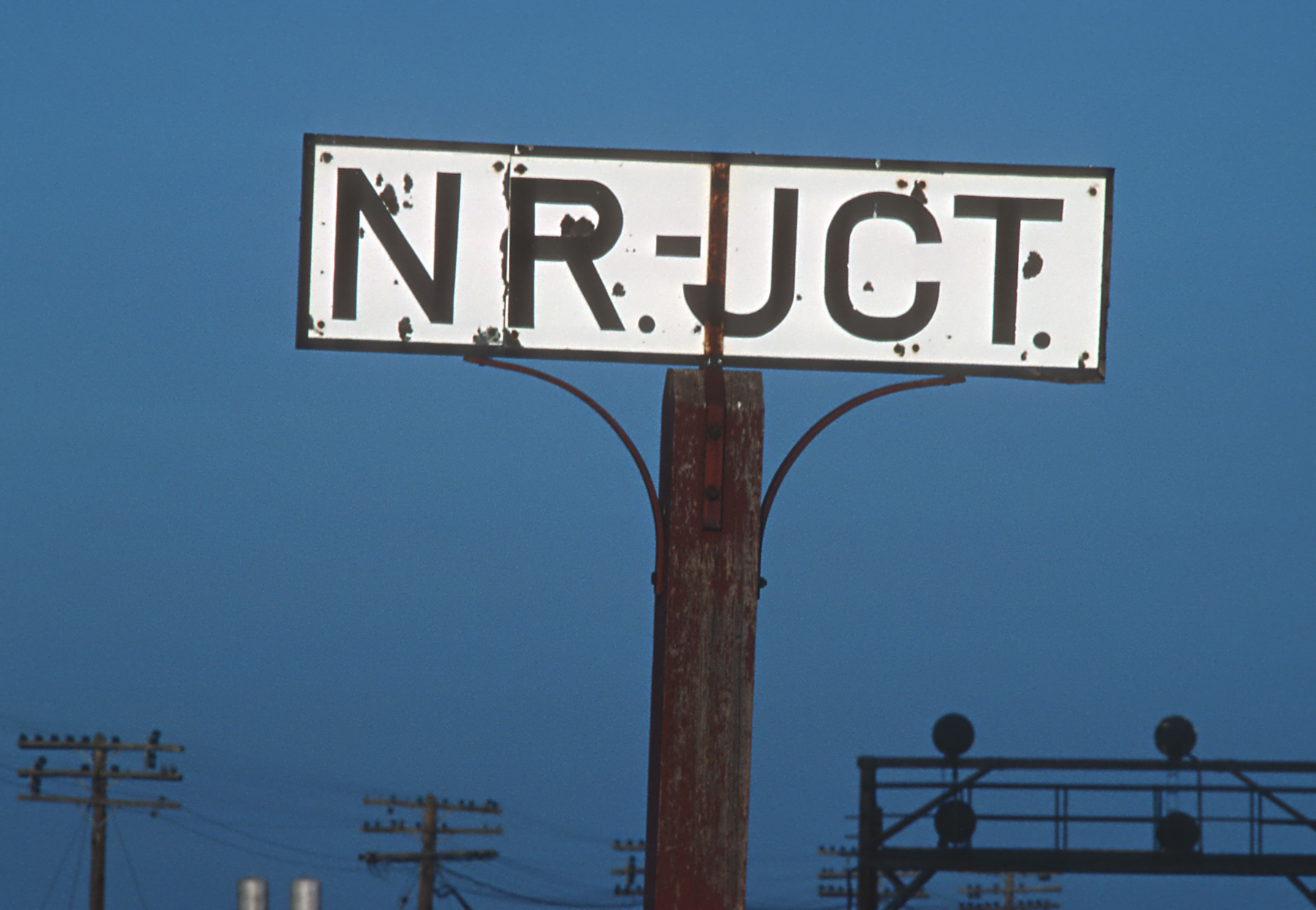 Railroads often marked important locations, towns, junctions, or interlockings with some type of wayside sign. This remains true today. Seen here is Santa Fe's NR Junction, located on the east side of Emporia, Kansas where its secondary route to Topeka and Hawthorne split from the transcontinental main line. Roger Puta photo.

This circuitry allowed for the steel rail's natural conductivity to be employed thus giving birth to automatic block signaling systems, the leader of which remains Union Switch & Signal created by George Westinghouse in 1881. Today US&S is part of Ansaldo STS, an Italian company. 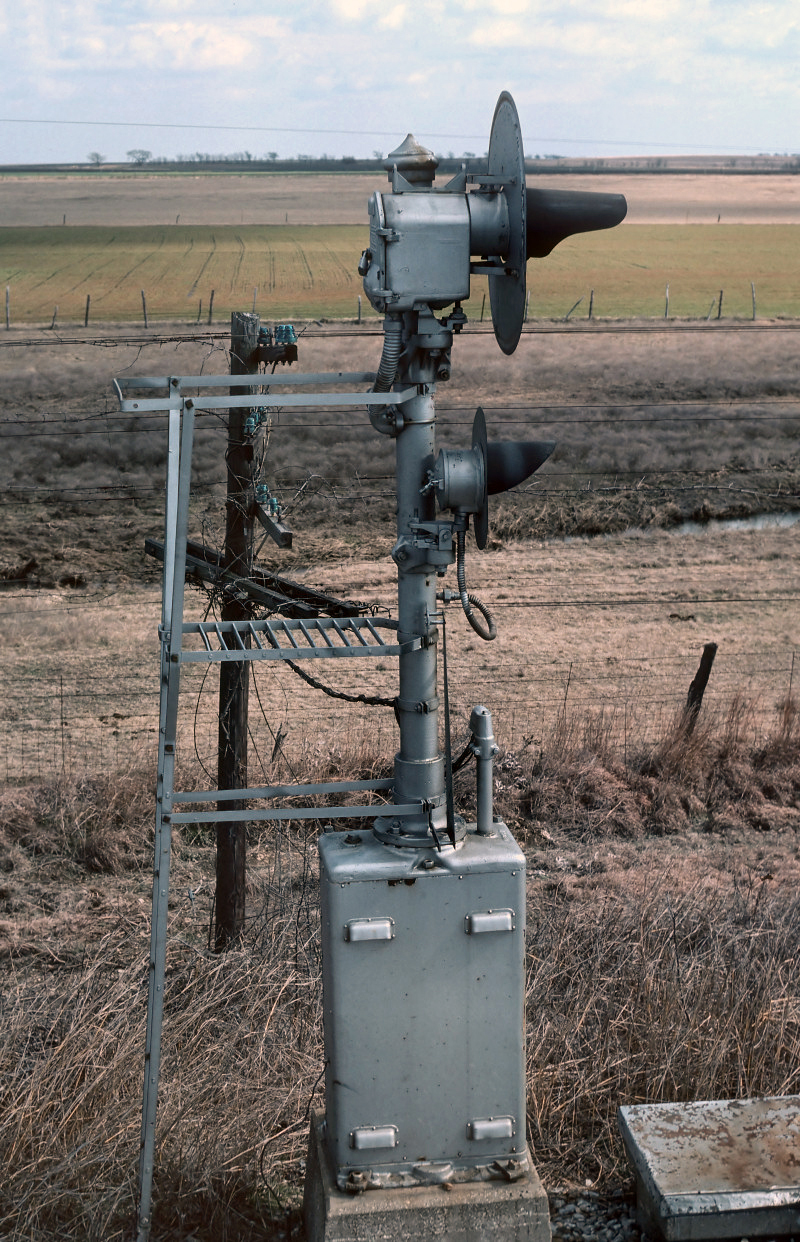 One of the less recognized wayside railroad signs are the quarter, half and three-quarter mileposts.

Before the days of GPS and computer-controlled signaling systems these mileposts helped train crews gauge their location between each mile marker not only for purposes of knowing how close the train was to its destination but also in the event of an accident or derailment. 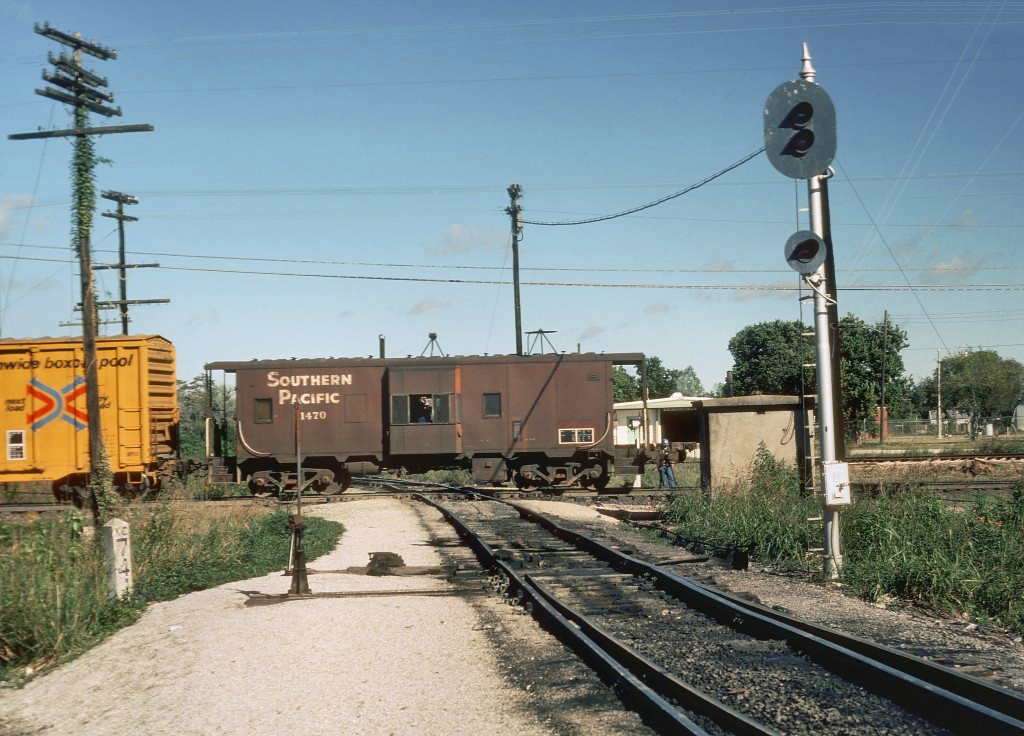 Some simply used fractional numbers (i.e., 1/4, 1/2, 3/4, etc.) while others like the Southern Railway used a series of dots and dashes to denote the meaning.

In any event, all the signs listed here are certainly not every type that was used just a cluster of many of the best recognized.