Signals have their beginnings dating back to the industry's infancy itself with the famed ball-type signal.

Perhaps, though, the most famous signal-type of all was the semaphore, which came into use in the mid-19th century and even today can still be found in regular service! 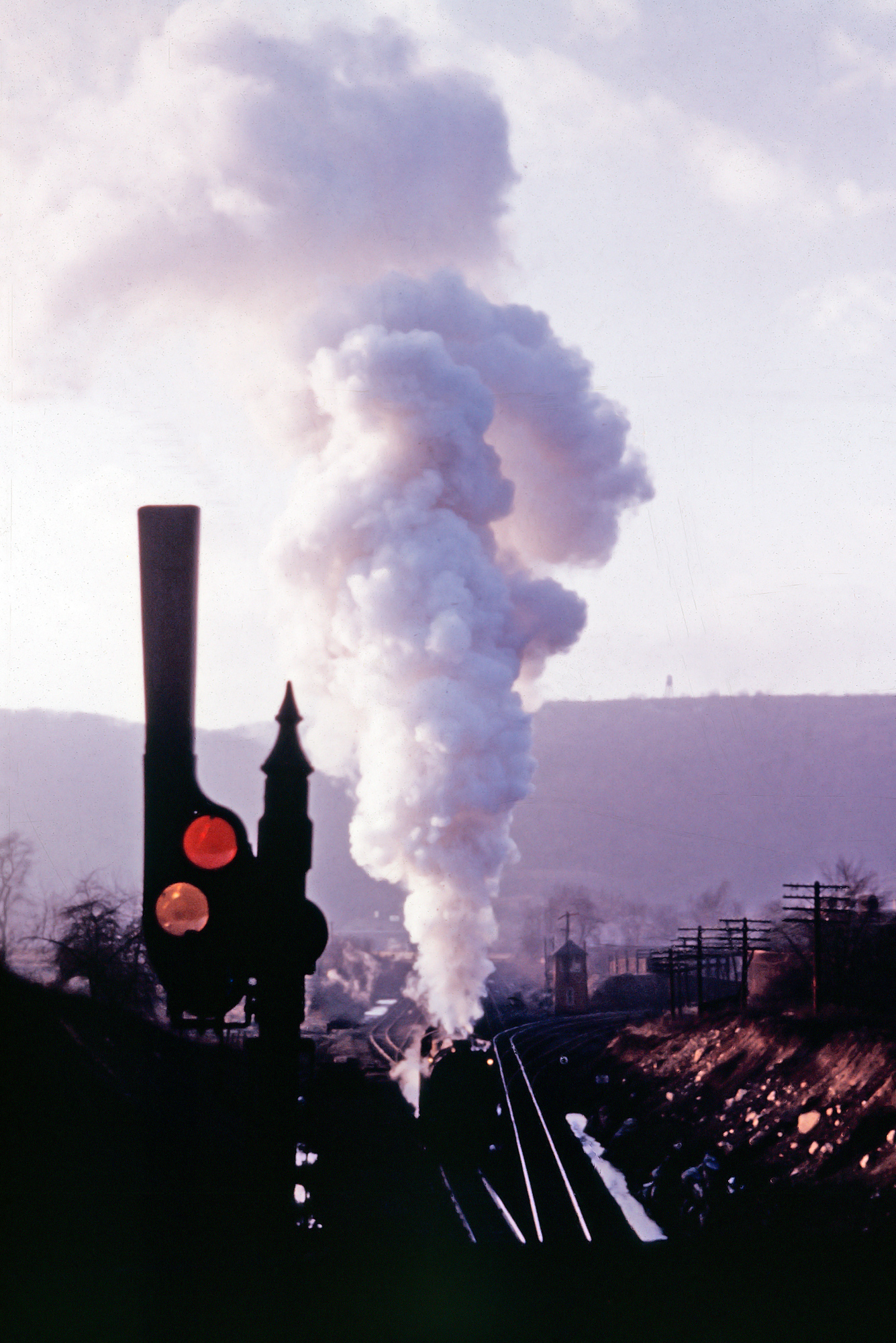 A semaphore protects the Western Maryland main line at Maryland Junction as an eastbound freight departs Ridgely, West Virginia, circa 1950. The train is about to enter Knobley Tunnel while MY Tower can be seen in the background. The line straight ahead, behind the train, heads for Knobmount Yard and Elkins while the tracks diverging to the right are bound for Connellsville. A.C. Kalmbach photo. American-Rails.com collection.

This circuitry allowed for the steel rail's natural conductivity to be employed thus giving birth to automatic block signaling systems, the leader of which remains Union Switch & Signal created by George Westinghouse in 1881.

Today US&S is part of Ansaldo STS, an Italian company.  The NC&F's original signaling system, way before electricity itself, used a ball (hence its name, the ball-type) that operated on a vertical pole and pulley system with the high, center and low position displaying various means (with the ball itself also usually both black and white coloring).

If the ball was high this was a clear-to-proceed display giving way to the now common railroad term "highball". Naturally, a the ball system required an operator at each location thus proving to be a rather expensive operation.

The first electrified railroad signaling system was the semaphore . When the semaphore came into use in the 1860s it was still an unpowered system.

Basically the semaphore worked on a blade system whereby the indication was dependent on the position of the blade.

During the semaphore's infancy having proper sight of the signal during the nighttime hours proved, obviously to be a problem so later versions were equipped with red, yellow and green lenses so that railroad engineers could clearly see the indication being given.

The earliest semaphores known as lower-quadrant semaphores operated below the horizontal position with a downward-vertical blade (on about a 60 degree radius) meant proceed while a horizontal blade meant stop. 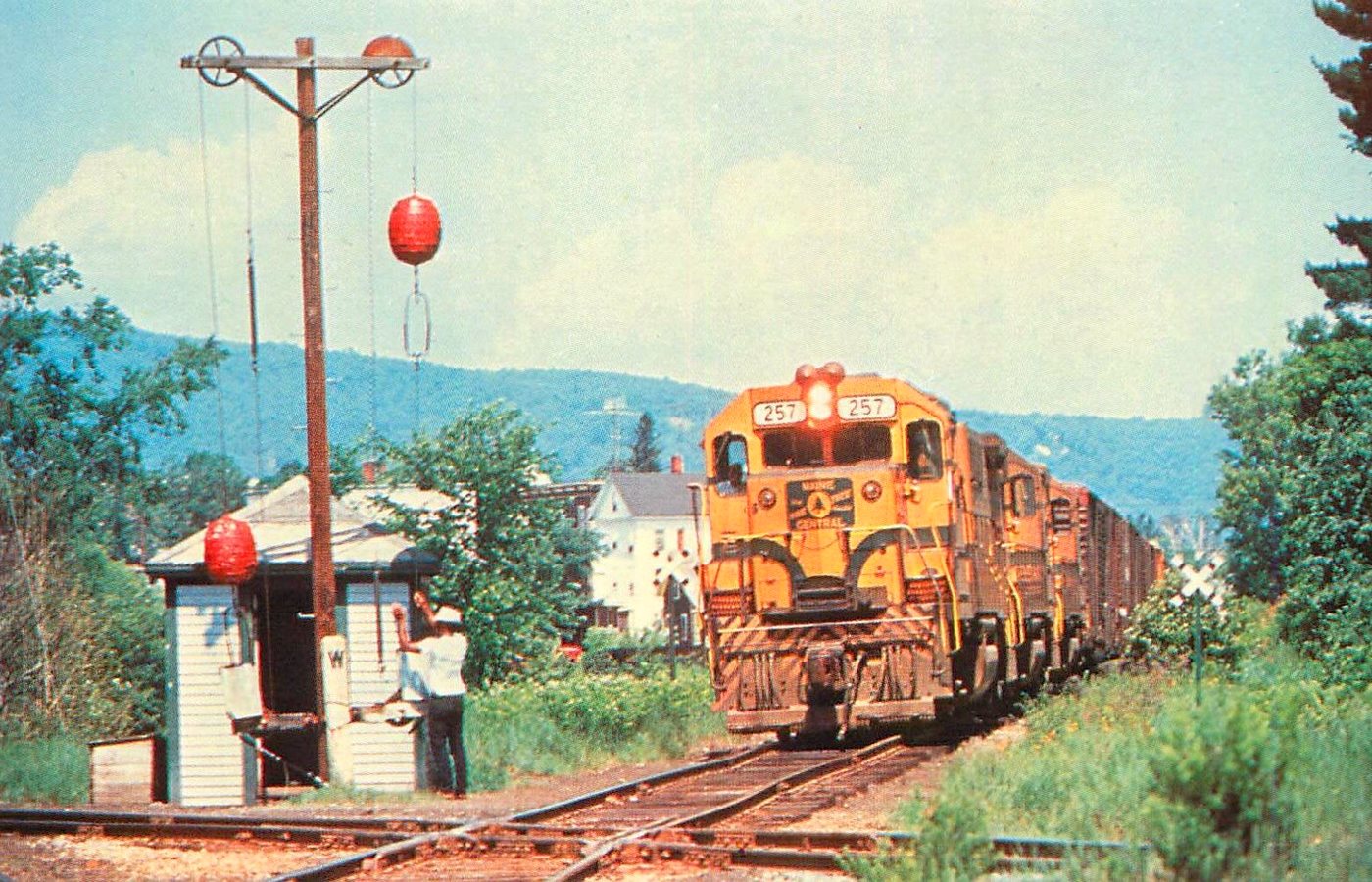 Maine Central GP38 #257 is ahead of freight 1/R-1 as it waits to cross the Boston & Maine diamond at Whitefield, New Hampshire protected by the last active set of ball signals (where the term "High Ball" originated) during the 1970s. Ronald Johnson photo.

The most common semaphore type was the three-position, upper-quadrant signal that was introduced around the beginning of the 20th century.

This type of semaphore can amazing still be found in use today, over 100 years since it became the standard semaphore type in 1908 (although be sure and get your photos of these structures while you can, many railroads are rapidly replacing them). 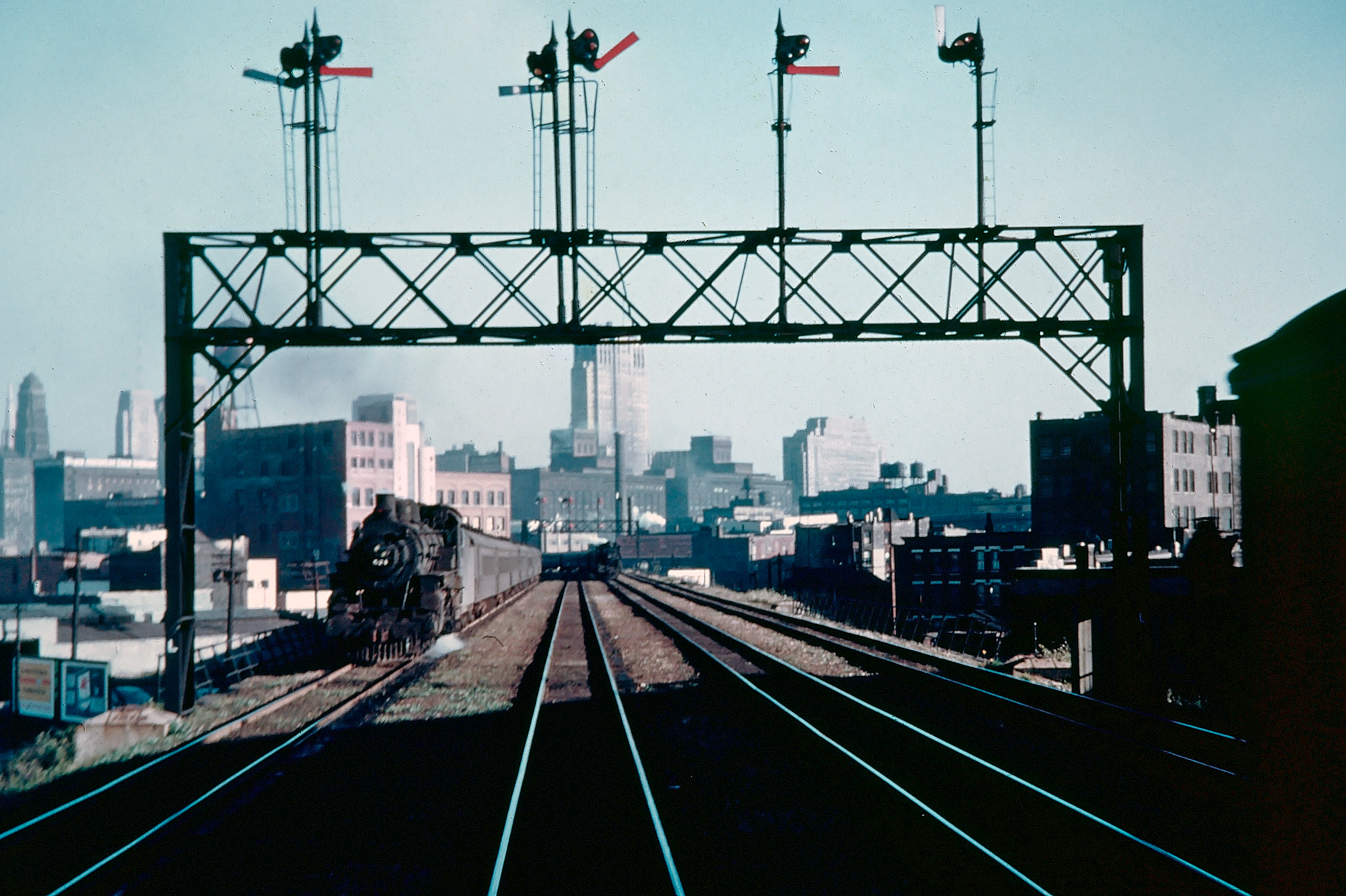 Semaphore blades protect the approach to C&NW's Northwestern Terminal in Chicago, circa 1953. Even by this date, semaphores were an antiquated technology although still widely employed across the country. A.C. Kalmbach photo. American-Rails.com collection.

Position-lights were the chosen railroad signals for use on the Pennsylvania Railroad and Norfolk & Western Railway.

The system used a standard yellow light usually with three lights arranged in a semicircle to the upper right and three to the lower left with one in the center.

Depending on what type of indication the three-aligned lenses were giving (i.e., vertical, horizontal or diagonal) the train would either proceed, stop or some other cautionary measure (such as stop and proceed).

Position-light signals can still be found on former PRR and N&W routes by current owner Norfolk Southern is slowly replacing them with the redundant tri-light for easier maintenance.

The searchlight would become one of the most popular railroad signals during the classic era of the 20th century.

It was introduced in 1920 and used only one lamp that displayed a green, yellow and red indication by way of rotating color lenses.

found use on dozens of classic railroads such as the Rock Island, Union Pacific and Atlantic Coast Line but the high amount of maintenance required to keep the colored lens system functioning caused it to fall out of favor for the much easier maintained tri-light signal. 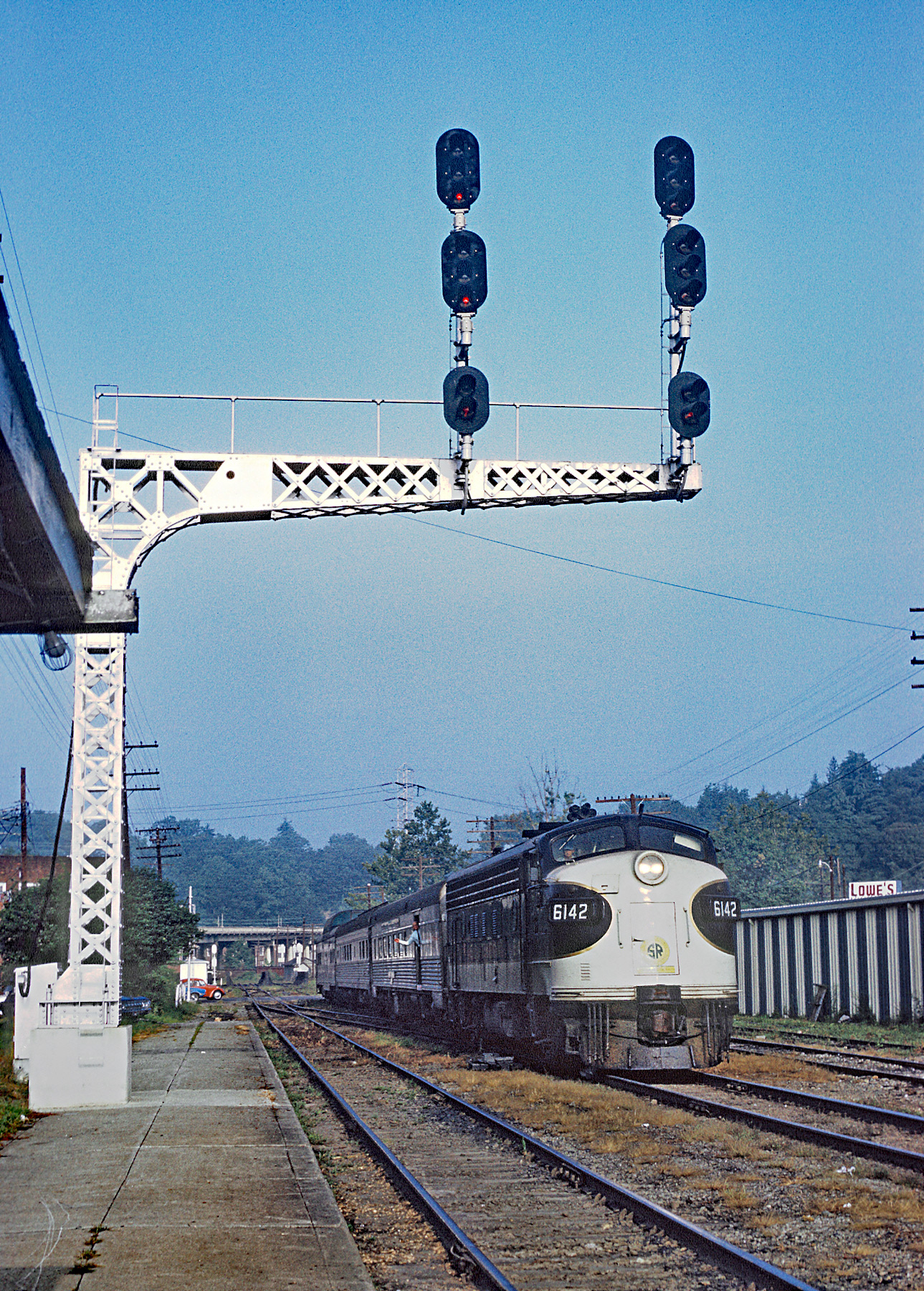 Color position-light signals, or CPLs, are virtually synonymous with the Baltimore & Ohio Railroad.

The B&O's is a simplified version of the PRR position-light in that it has no center lens but essentially functions in the same way as the PRR version save that it uses different colors to project its meaning and not the standard yellow.

The B&O also used a white light above the signal for further instructions (sometimes cantilevered). 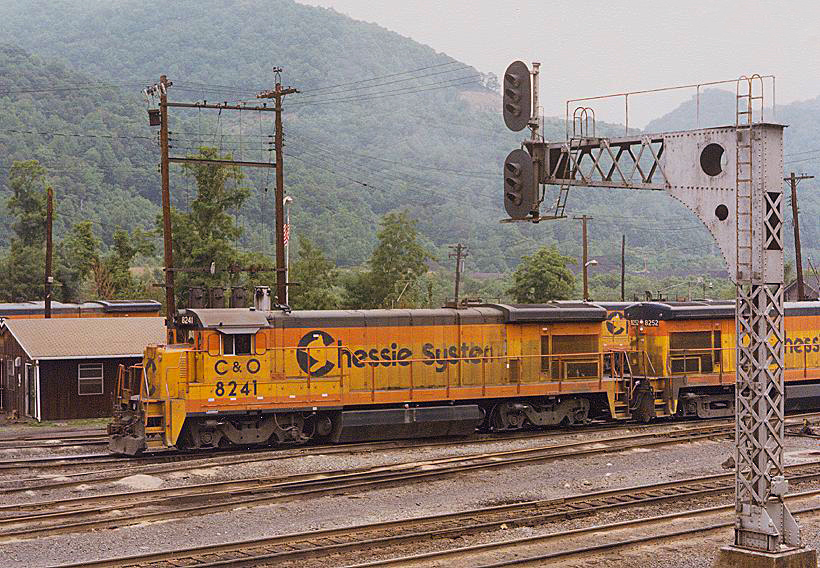 Color-light signals came into use around 1914 and are essentially an inverted highway stoplight with green above (proceed), centered-yellow (caution) and restricted below.

However, other versions of this railroad signal include the triangle design, which operates basically in the same fashion just with a different layout.

Also known as tri-lights they are, today, the favorite among Class I railroads with lines like CSX and Norfolk Southern Railway replacing their historic B&O and PRR versions with color-lights for ease of maintenance. 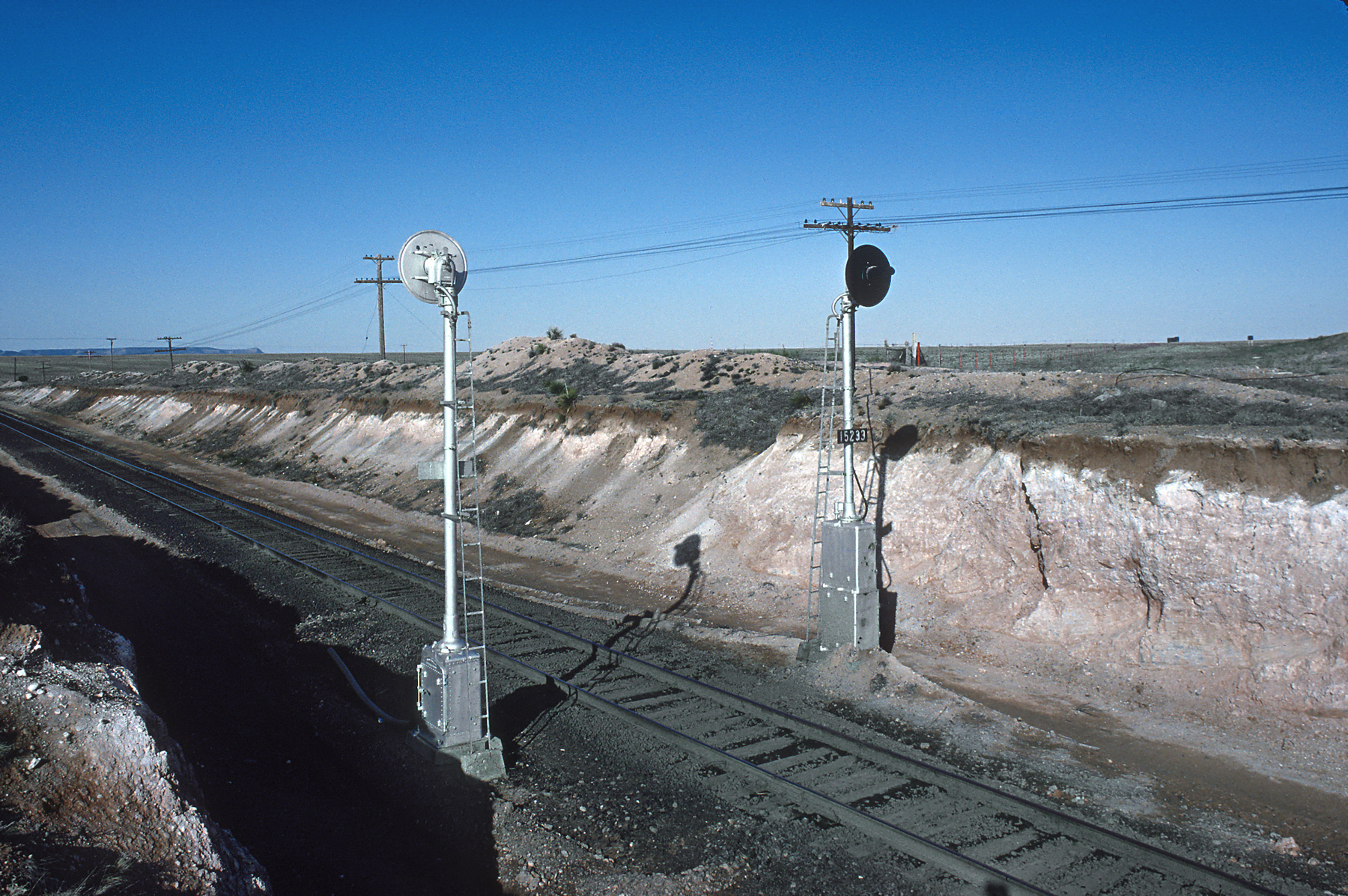 Signals, How They Function

Railroad signals, historically and even today are a lot more complicated, in terms of their meaning than your basic highway stoplight.

To begin railroad signals serve to functions, protection and control and there are two different types; permissive and absolute.

A permissive signal provides only protection within a given block (meaning a section of signaled track along a rail line having several blocks between Point A and Point B, each protected by a set of signals) while an absolute signal provides both protection and control (i.e., meaning it protects the block while also giving a train ruling instructions). 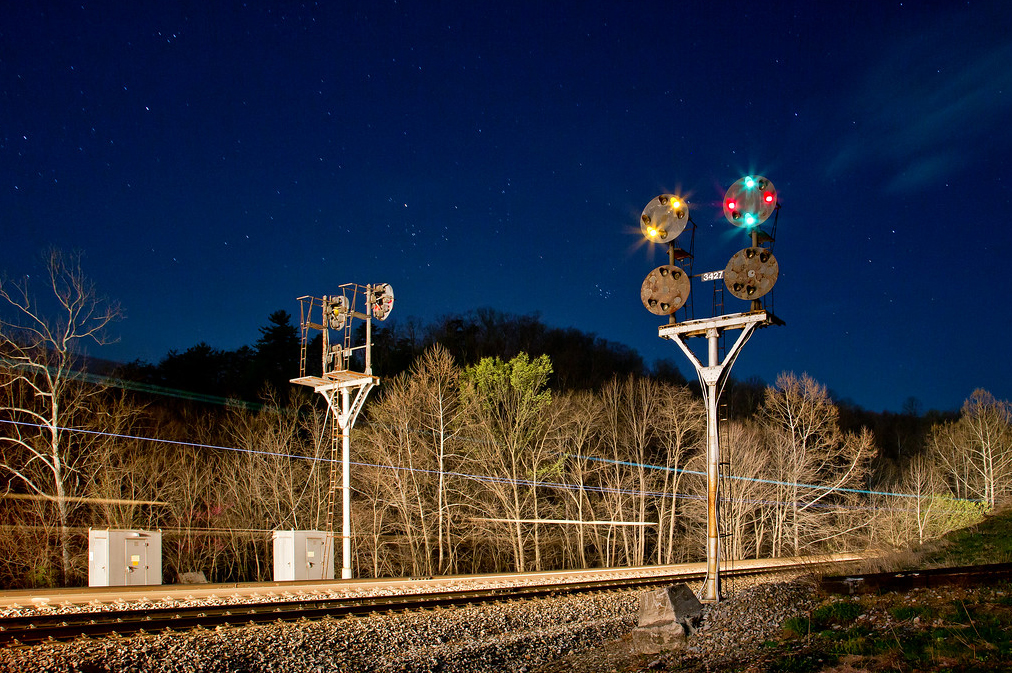 Classic designs like these Norfolk & Western position lights are still active throughout the country but dwindling in numbers. These particular sentinels are found near Willowton, West Virginia along Norfolk Southern. Loyd Lowry photo.

After William Robinson's invention of the track circuit in 1872 this gave railroads the ability to signal blocks of rail lines.

The first system was the Automatic Block Signal which used a masted-signal illuminating red, yellow or green to give an indication.

It worked by using low-voltage batteries along the block and as long as the rails were clear of trains a green, proceed indication was shown but when a train entered the block it broke the circuit with both signals then displaying red, or restricted.

Centralized Traffic Control, the most commonly used signaling system today uses both ABS and dispatchers to control the movement of trains as an extra measure of safety. 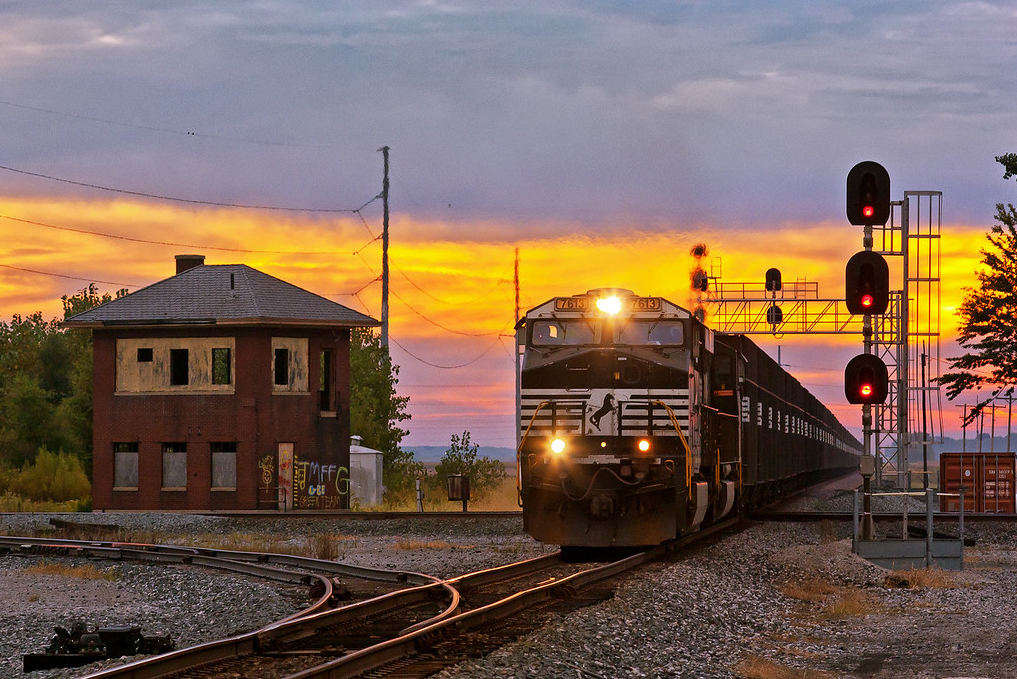 In the modern era Class I's have transitioned to a simplified stop or tri-light type signal, as seen here at Leipsic, Ohio. Pictured is a Norfolk Southern coke train heading westbound past the old XN/RO Tower on the morning of September 18, 2013. The train is running the old Nickel Plate Road and crossing the former Baltimore & Ohio. Loyd Lowry photo.

So, just because a signal may display a green, proceed indication the train cannot move without verbal permission from the dispatcher (unless it has already been given permission beforehand to pass through the upcoming block).

Other signaling systems that were once or are still in use include Direct Traffic Control (DTC), Form D Control System (DCS) and Track Warrrant Control (TWC).

Although it has been mentioned several times above railroad signal displays (green, yellow, and red) mean three things: