Railroad tampers are another type of maintenance equipment that have greatly improved the efficiency and speed in maintaining the track and right-of-way.

As there name implies railroad tampers use hydraulic jacks to "tamp" the ballast, which levels the stone around the ties as well as works it underneath the ties for proper support.

As with virtually all maintenance equipment before these machines were constructed all such work was done by manual track gangs that required a strong back and powerful arms.

The newest tampers come equipped with a bevy of electronics to also properly align the track after tamping and what are known as production tampers have the capability of lifting the rails to insure that the ballast is beneath the ties for maximum support.

Today, tampers are manufactured by several companies including Harsco Rail (which bought out Fairmont, a long-time builder of this machine), Plasser American, and Dymax Rail. 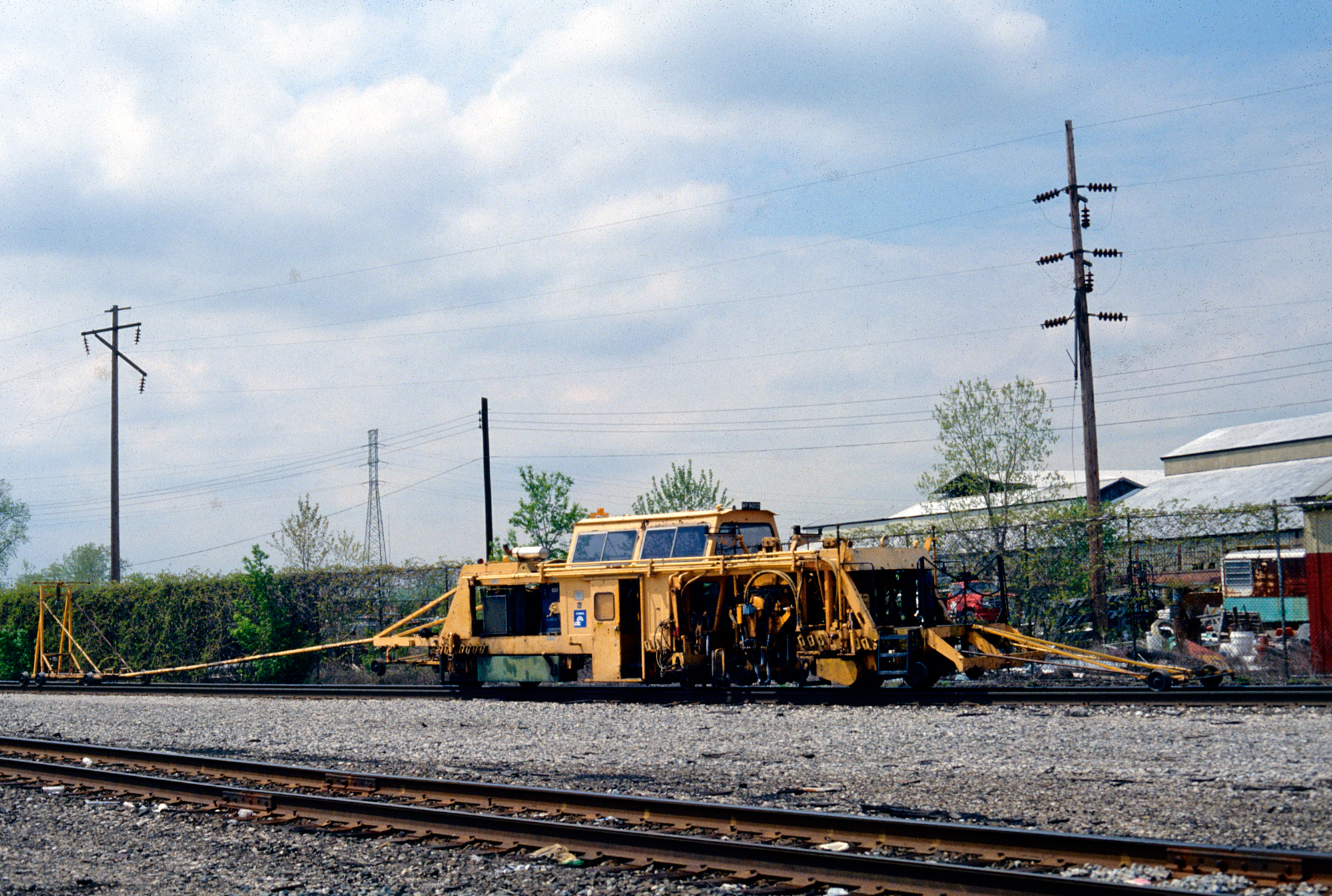 A Conrail track tamper at Air Line Junction in Toledo, Ohio; May, 1994. This machine is capable of tamping the ballast (for improved support of the track structure), jacking (lifting and vertically aligning the track), and aligning the track horizontally. American-Rails.com collection.

Before the advent of mechanized railroad tampers the work of getting ballast beneath the ties as well as aligning the track was all done by hand and a good eye.

The job involved a track gang of men who would push the ballast beneath the ties one at a time and track jacks were used to properly align the rails.

As you can imagine it was slow, very labor intensive work all of which has been greatly improved with the mechanized railroad tamper.

Railroad tampers almost always work as some kind of mechanized gang, usually as part of a tie or rail gang (which today normally consists of an army of machines, not men).

Today's tie and rail gangs include such machines as: 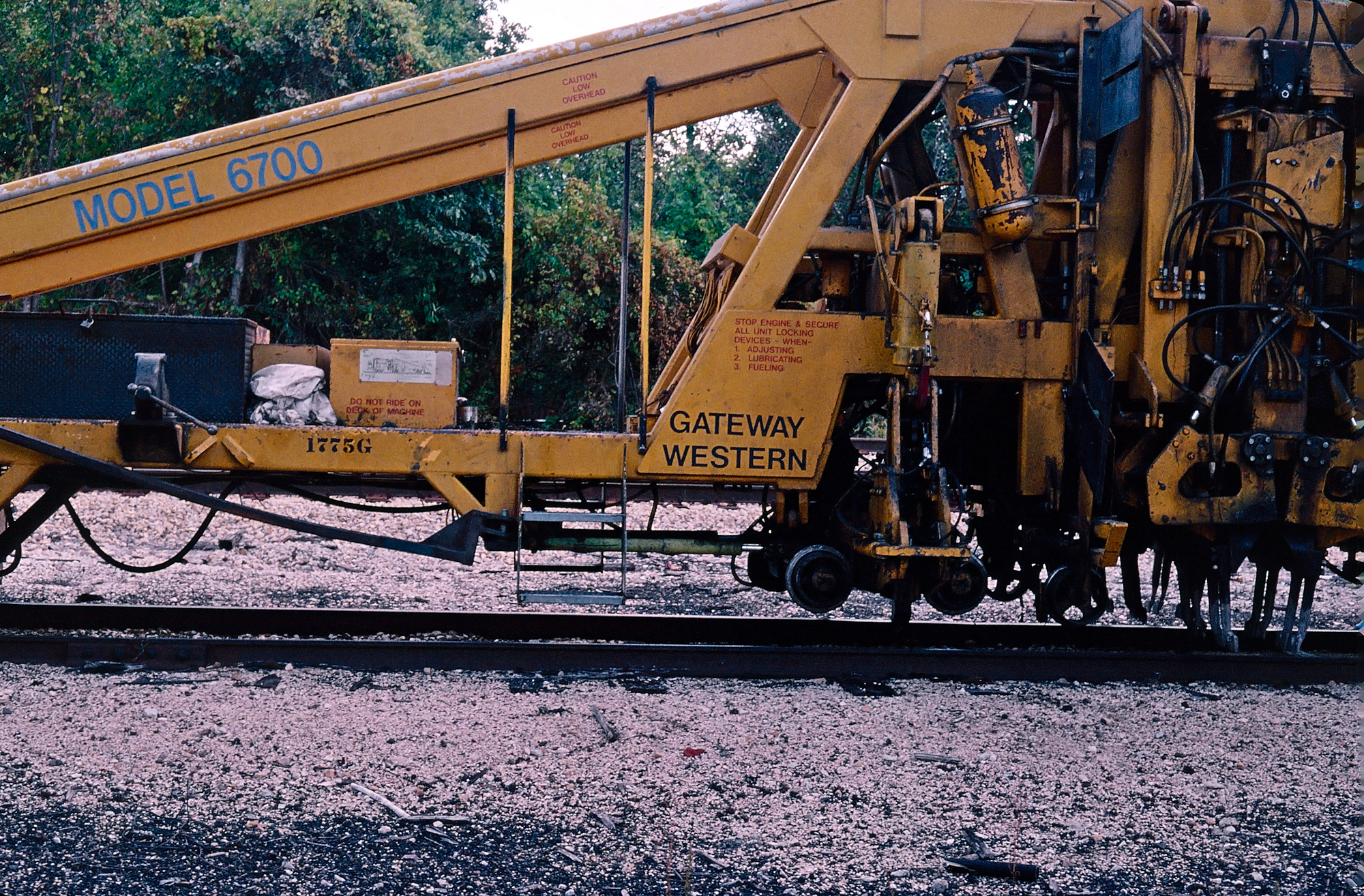 A closeup view of a Harsco model 6700 tamper, belonging to the Gateway Western. American-Rails.com collection.

As it is, tie and rail gangs may look like machines simply heading off to work in an elephant line.

However, they are actually very coordinated work details with each machine and accompanying operator assigned a very specific task to get the work done as quickly as possible.

The reason for speed and hastiness in finishing a maintenance job is simply, to keep the trains and goods moving.

Delays are quite costly and avoided at all costs because if the freight isn't delivered the railroad's don't get paid!

Standard railroad tampers work by using sets of heavy-grade steel jacks, which are hydraulically controlled, and feature a small paddle-like design on the very end of the tool.

These jacks are then lowered into the ballast at a certain depth, depending on the thickness of the ties and oscillate at thousands of revolutions per minute.

This back and forth motion, along with "pushing" the ballast downward, allows the stone to become very free flowing and causes it to work beneath the ties, giving the track structure maximum support.

Tamping also helps to level out the ballast a bit, although final sculpting and angling of the stone is left to ballast regulators.

Perhaps, though, the most efficient type of railroad tamper is the production tamper. Looking as if it is a type of auto carrier a production tamper is capable of lifting the entire track structure where it is working (the reason for the extra support beams built into the machine).

The purpose of this is so the machine can not only more efficiently situate the ballast beneath and around the ties but also to properly align the track as well.

Using what is known as the Delta System developed in the 1950s production tampers are able to remove the bumps and dips in the rail by aligning the track to a perfectly "flat" traveling surface (excluding super-elevated curved track) using triangulation.

One other type of railroad tamper is the switch tamper, which is able to swivel its equipment and jacks to work the intricate spaces between railroad switches and diamonds.

There you can also check out other types of maintenance machines the company produces such as spike inserters/pullers, undercutters, and blowers.