Like the well car used in intermodal service, autoracks are another specialized car used by the railroad industry to move a specific product (in this case automobiles).

While some form of car has been used to haul autos by train since virtually the first Model-T rolled off the assembly line in early 20th century, it was not until the 1960s that railroads began developing a car custom-tailored to move specifically automobiles.

Prior to that time railroads relied on their most trusted apparatus to handle freight, the ubiquitous boxcar.  They were later retrofitted with racks to handle about four vehicles but little other changes were made.

As Mike Schafer and Mike McBride note in their book, "Freight Train Cars," the industry was forced to adapt when trucks began hauling a carload's worth of vehicles in a single trailer (about six cars or pickups).

As the design was refined over the years, today what is essentially an enclosed flat car featuring two or three levels of racks to transport vehicles is commonly used in service.

Many of these cars currently owned by TTX, or Trailer Train Corporation (originally a Pennsylvania Railroad company), the leader in the distribution of COFC, TOFC, and autoracks. 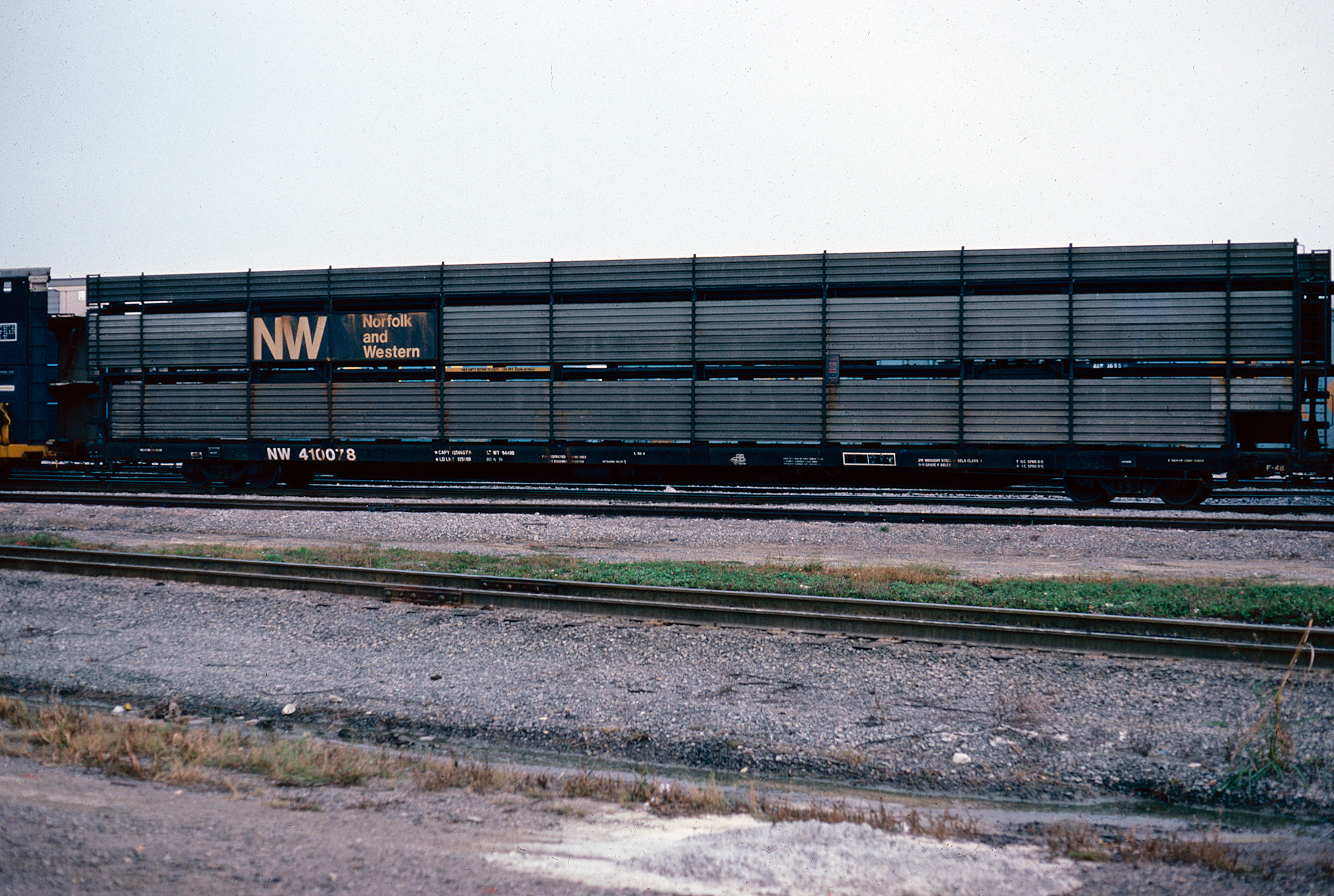 Norfolk & Western open-top autorack #410078 in the early Norfolk Southern era during September of 1982. These designs operated during the transition era from open autoracks to fully enclosed cars. American-Rails.com collection.

From the turn of the 20th century through roughly the 1960s railroads hauled most of their merchandise traffic (i.e., virtually everything that was not bulk material like coal or aggregates) using the ubiquitous boxcar.

The industry thrives on redundancy to maximize efficiency and since boxcars could handle so many different types of commodities most freight trains were largely comprised of them.

If it were not for shippers requesting specialized cars for their products railroads would likely still be using the boxcar in large numbers.

When automobiles were produced in large enough numbers to be profitably transported by train they were just the right size to right within a boxcar and railroads were happy to oblige.

Interestingly, early autos were designed specifically to fit within the dimensions of a boxcar. However, again, over time the car presented problems in this capacity. 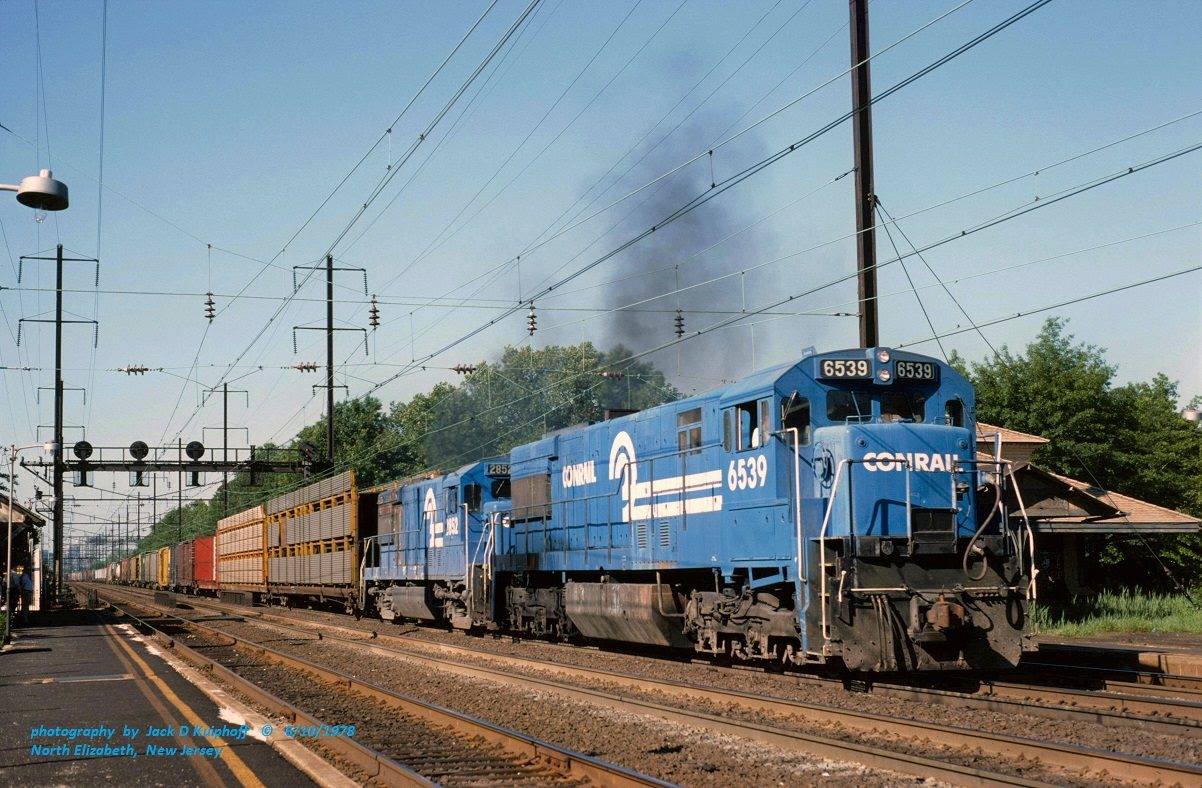 Conrail U30C #6539 and U30B #2852 lead OIEN-0 southbound past the station in North Elizabeth, New Jersey along the Northeast Corridor on June 10, 1978. By this era, autoracks were fitted with siding for better protection against vandals but still left vehicles exposed to the weather. Jack Kuiphoff photo.

Despite boxcar customization that included racks to hold more autos and end doors to decrease loading times, ultimately only a few could be hauled in each car making the entire operation not particularly profitable for either railroads or automakers.

Things began to change rapidly after World War II with the development of the Interstate Highway system during the 1950s. With GI's returning home, finding jobs, money to spend, and new roads to travel folks took to the road in massive numbers.

Additionally, the trucking industry began chipping away at the industry's traffic base, including the movement of automobiles.

This factor, coupled with larger automobiles, resulted in the need for a specialized car that could efficiently and economically means of transport this particular product.

While it seems elementary railroads still took a lot of time refining a car best fit for moving automobiles. At first it was suggested to again improve the boxcars with two or three levels of racks for a more efficient use of space. 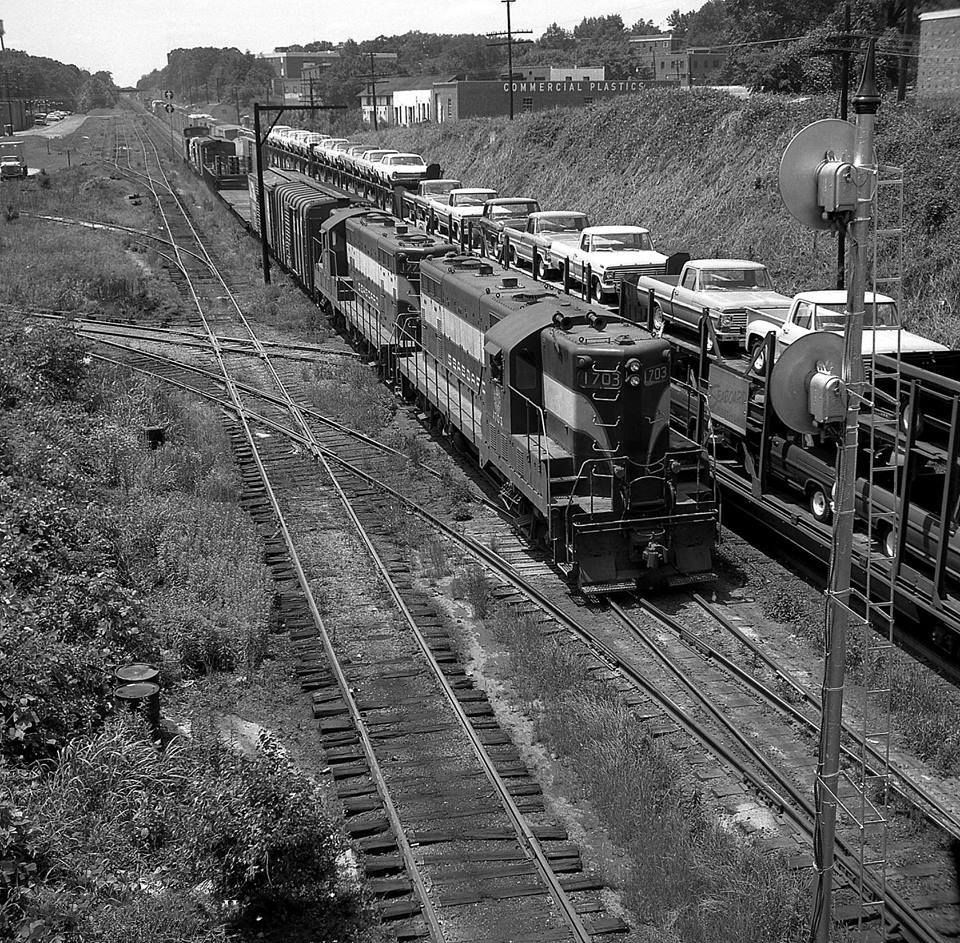 A pair of Seaboard Air Line GP7's appear to be working local service as a freight rolls through busy Boylan Junction in Raleigh, North Carolina in the 1960s. The track running from left to right is Norfolk Southern's main line. Open, tri-level autoracks like these were once the common method of transporting vehicles. Warren Calloway photo.

For a time such a design was employed since railroads could continue to use this utilitarian car with only a slight modification.

However, at the time the 40-foot boxcar was the common design and as such could only hold a few vehicles. Additionally, extending the length meant adding significant weight which railroads wanted to avoid.

It's interesting to point out that through the 1940s automobile manufacturers had based the size of their vehicles on how many would fit into a standard 40-foot car.

By the 1950s, though, this would no longer do. It was soon discovered that simply by modifying flatcars could one best utilize the available space.

The definition of the flatcar is rather self-explanatory, a basic design consisting of a flat, horizontal surface usually equipped with standard two two-axle trucks to transport any type of cargo, which can withstand the open elements of Mother Nature during its journey to its destination.

The car can haul anything from farm equipment and containers to industrial parts and even rails. Its flexibility makes it highly desirable by railroads.

This certainly held true in the case of the autorack, which began to make its appearance in the 1960s. The first autoracks were simply long flatcars with initially two, and later three levels of storage that could hold anywhere between 8 to 18 vehicles.

The car itself was 89 feet in length and provided groves/guide tracks for the vehicles as well as interior tie-down equipment.

Not only could this new design carry several autos but they could also quickly be loaded and unloaded, another advantage over the cumbersome boxcar. 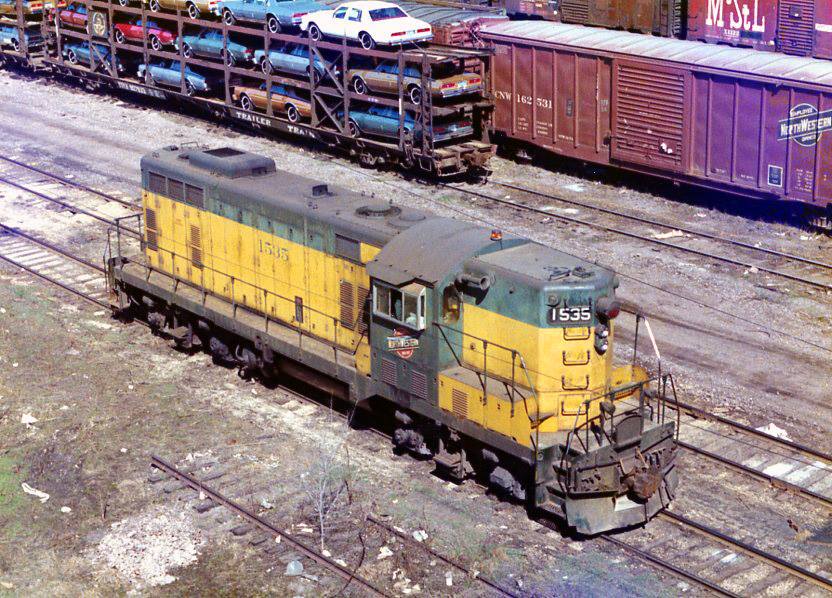 However, these early designs did carry significant drawbacks, primarily related to transportation hazards.

Despite the fact that railroads could now economically and profitably haul hundreds of cars in a single train the product was completely open and exposed not only to Mother Nature but also vandals, hobos (which found them to be perfect sleeping and resting quarters), or simply catching line-side from passing trains or other means.

At first, corrugated steel (later aluminum, which provided another means of lighter weight) was attached to the sides. Again, however, the vehicles were still left exposed to the elements.

Eventually, in the 1980s fully enclosed models entered the market and these tall cars can commonly still be seen in service today. Of note, the cars also carry padlocks, which for the most part prevents vandals from either stealing or damaging the vehicles. 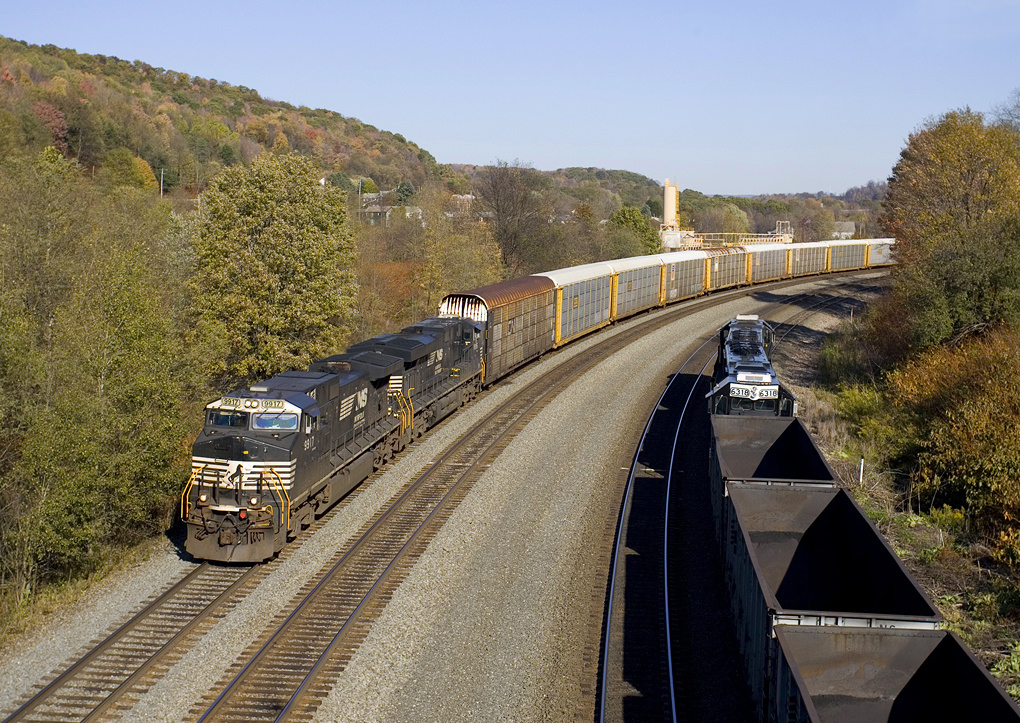 Norfolk Southern C40-9W #9917 and mate roll westbound with an autorack freight at South Fork, Pennsylvania as the train passes an empty string of coal hoppers on October 19, 2009. Wade Massie photo.

Finally, as the autorack evolved and car makers attempted to continuing improving the efficiency of moving their commodity by rail, General Motors and Southern Pacific debuted the "Vert-A-Pac" during the 1970s.

It would haul a specific product, the Chevrolet Vega, a small, compact, and cheap design that was transported vertically in a special car which could haul a total of 30 cars, or 15 on each side.

The companies tested the rail car during 1969 and put it into service during April of 1970. The Vert-A-Pac could certainly haul nearly twice as many vehicles as the standard autorack but it also handled only one product.

Additionally, the Vega proved an unsuccessful GM venture. As a result, the Vert-A-Pac survived only until 1977 when it was pulled from service.