The modern open-top hopper car is a bit more sophisticated than what they might appear.

Today, the open-top version of these cars haul everything from coal to aggregates, such as ballast (a term which refers to the crushed rock used under the railroad tracks that acts as support and cushioning), and feature a number of different drop-bottom designs to empty their cargo.

You may then be asking, "What in the heck is the difference between gondolas and hoppers?" The drop-bottoms are basically what separate the two types.

Whereas gondolas can look just like hoppers, right down to their size, length, commodity, and even a basic form of drop-bottom as well (which discharges material straight down) hoppers do not.

Instead, they feature some type of angled or sloped chutes or hatches, which use the force of gravity to quickly unload their cargo and never requiring being tilted or turned upside-down in any way.

The original hoppers, as noted in more detail below, were essentially what is described as "jimmies," a little two-axle cars used on pioneering tram and mule-powered railroads of the 1820's and 1830's to haul about 1.5 tons of coal (3,000 pounds) from mines to a nearby canal or river. 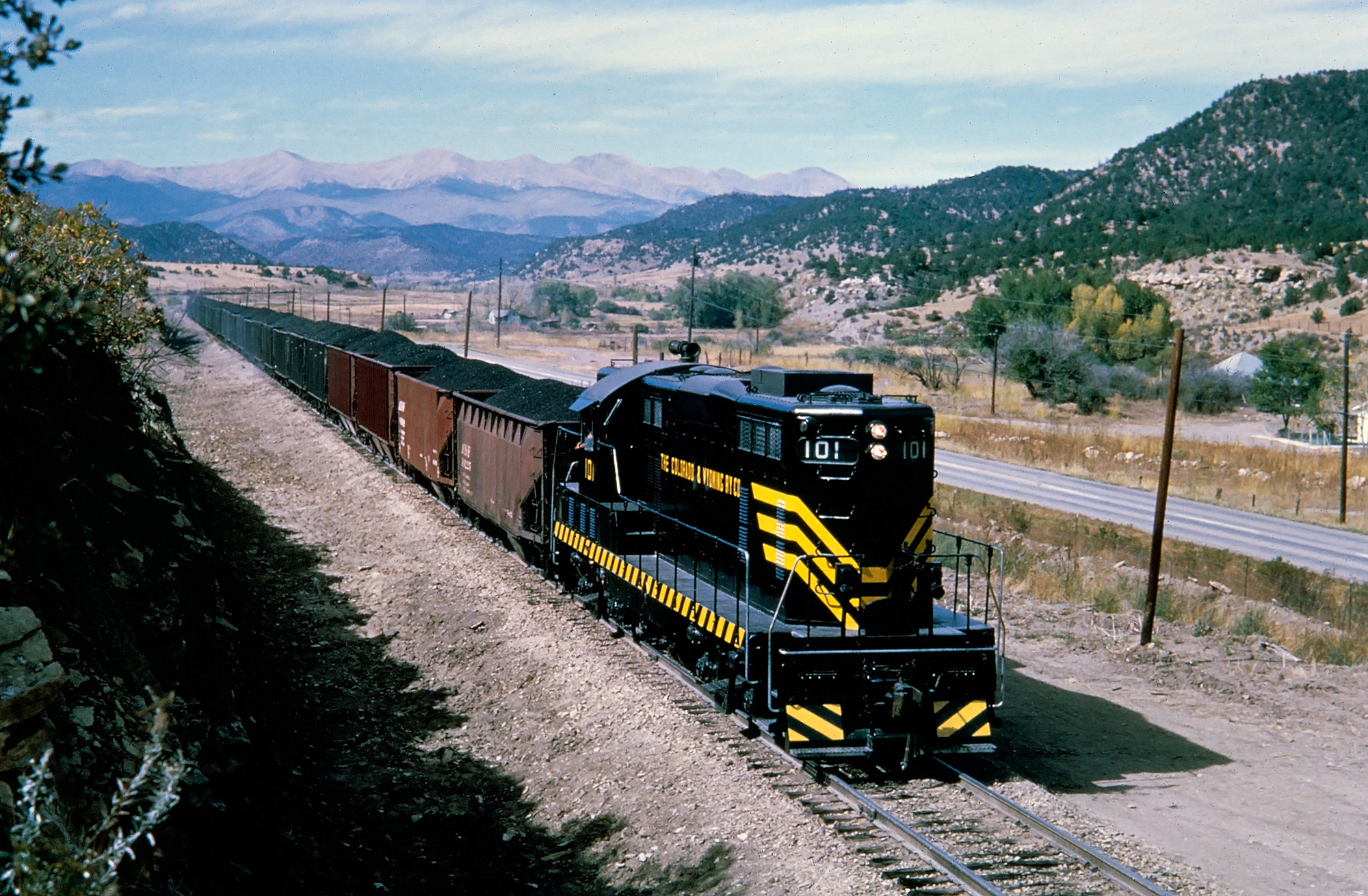 Colorado & Wyoming GP7 #101 leads a string of loaded coal hoppers eastbound from the Allen Mine near Weston, Colorado, circa 1967. American-Rails.com collection.

The little jimmies carried the basic features of the modern-day hopper which differentiates its from the gondola.  Still, as Mike Schafer notes in his book, "Freight Train Cars," the hopper was essentially a fancy version of a gondola.

By 1840 the car had improved to include a pair of two-axle trucks for heavier loads and a better chute design for increased unloading.

As a result this version is often credited as being the original hopper car.  In his book, "The American Railroad Freight Car," author John White, Jr. notes the earliest hoppers were those mentioned above and unloaded their coal by a lever which released a chute at the bottom.

The more modern coal hopper would appear around 1850; it featured four axles (which rode on an early truck system), was 11 feet 6 inches, 5 feet 3 inches wide, 40 inches deep, and carried a wheelbase of 9 feet 6 inches.

It weighed roughly 4,500 pounds and could haul 4 tons. Over the years, the hopper became larger and stronger (moving from wood and wood-steel construction to all-steel construction) able to haul heavier and heavier loads (which allowed for better efficiency and thus, better return-on-investment).

By the late 19th century the car could handle upwards of 40 tons thanks largely by the switch from wood to iron/steel in car construction.

For instance, during the United States Railroad Association’s reign during World War I, as with the 40-foot boxcar, the hopper became standardized with the 55-ton version.

Interestingly, the classic jimmie did not immediately disappear after the hopper was born. Some railroads continued using the design as late as 1900 until most jimmies finally fell out of favor. 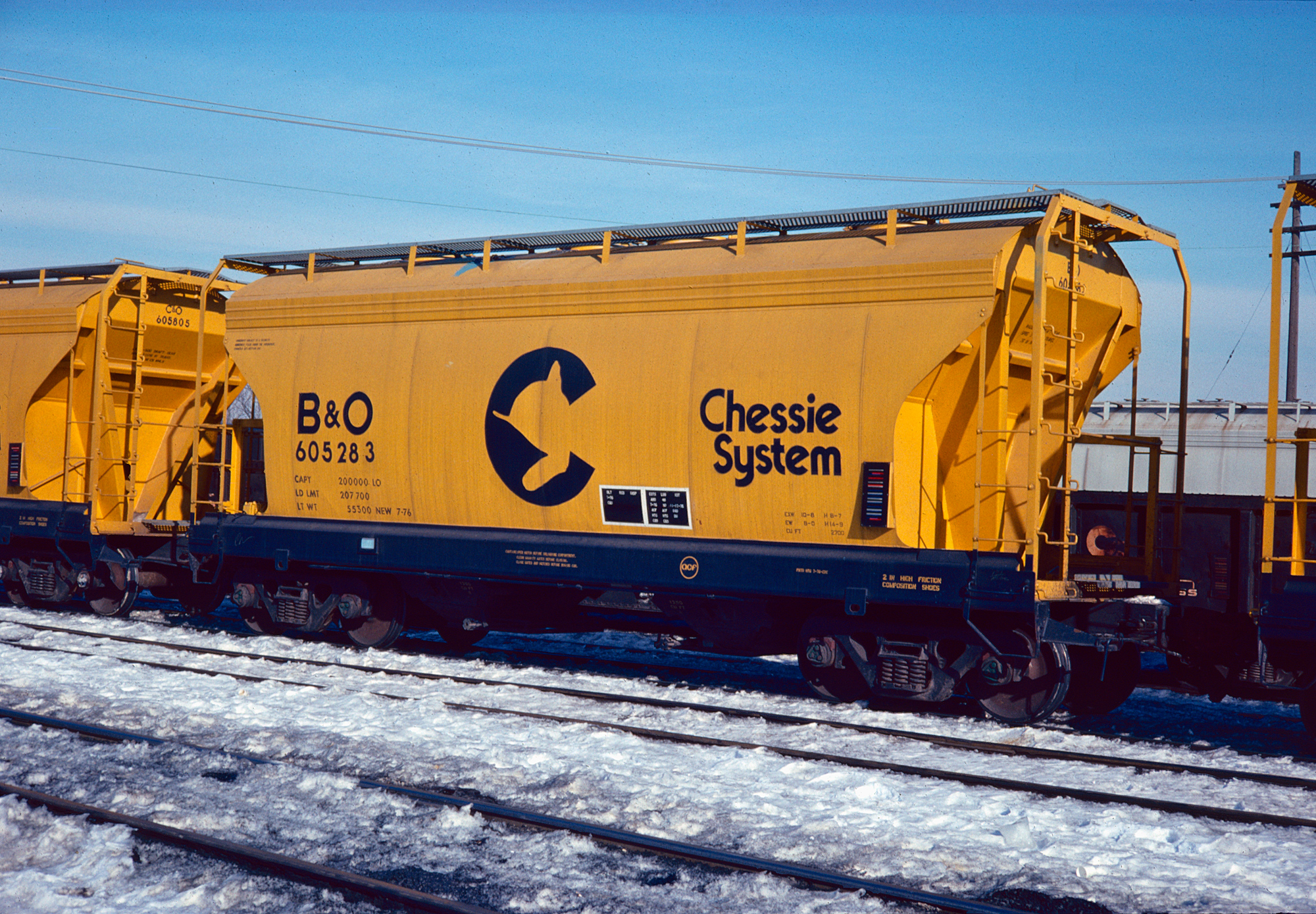 As the hopper became larger so did the number of drop-bottom chutes it carried; from two, to three, and now today most carry four chutes (more chutes allow for faster unloading times).

Similarly, what has allowed the increased number of chutes on a hopper is mostly the result of its increase in size from 50 tons to today’s 100-ton capacity, which is commonly used in the present-day industry.

The standard hopper found currently roaming the rails has come a long way, even from the USRA 55-ton standardized car of the early 20th century.

Not only are the current cars capable of hauling 100-tons but also many now have rotary couplings to literally spin the car 360 degrees while still attached to the train.

This setup increases the speed at which the product can be removed from the car. Although, one then wonders why have drop-bottom chutes at all? 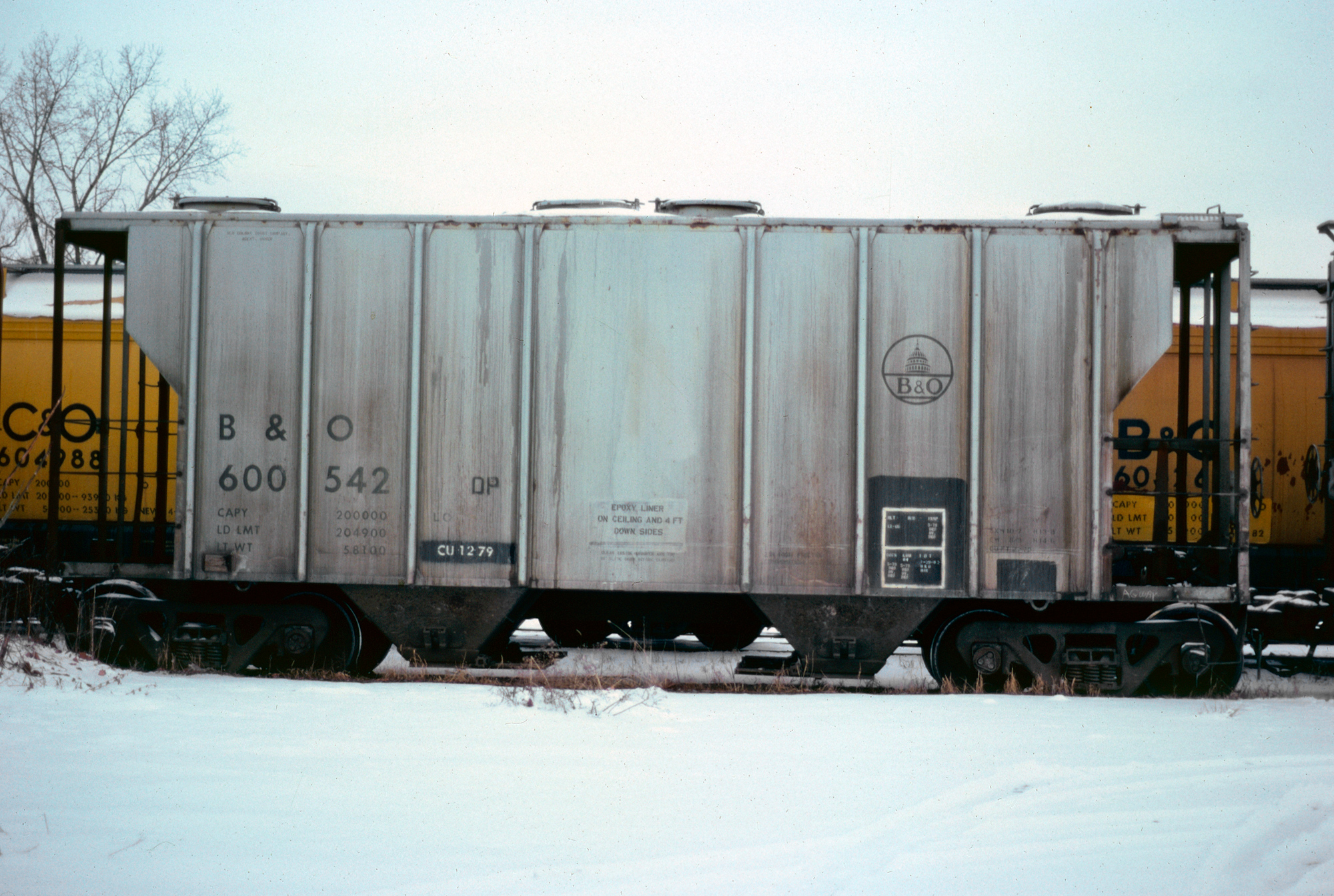 Baltimore & Ohio 2-bay covered hopper #600542 is seen here in March, 1983. These cars, boasting 2003 cubic feet of space, were manufactured by Pullman-Standard and classed as the PS-2. The often handled cement or sand but also carried everything from grain to gravel. American-Rails.com collection.

Other variations include covered hoppers, which carry bulk products such as grain, lime, cement, and in some cases sand that must be protected from the weather while in transit.

The history of this car can also trace its heritage back to the industry's early years. The first covered hopper is said to have appeared in the 1830s to haul, as mentioned above, grain and prevent its exposure from the elements.

The car had open hatches on the roof as well as on the bottom for loading and removal. Surprisingly, though, railroads were slow to use the covered hopper for this particular purpose.

Instead, ever-interested in redundancy they found the ubiquitous boxcar, capable of handling everything from cars to bundles of paper, could do the job just as well.

Widespread use of the covered hopper for weather-sensitive products did not begin until after World War II, particularly during the 1960s and 1970s.

It is widely used and one of the most common cars you will see moving within a train. Ore jennies are yet another type and these little cars get their size for a reason.

They are built specifically for hauling taconite pellets (iron ore) which are much more dense (i.e., heavier) than most other types of bulk materials like coal and stone.

As such, they are much smaller but have a tonnage rating roughly that of a standard-sized hopper. (these cars are predominantly found in the northwest Great Lake region such as Minnesota and Michigan where large concentrations of iron ore continues to be mined). 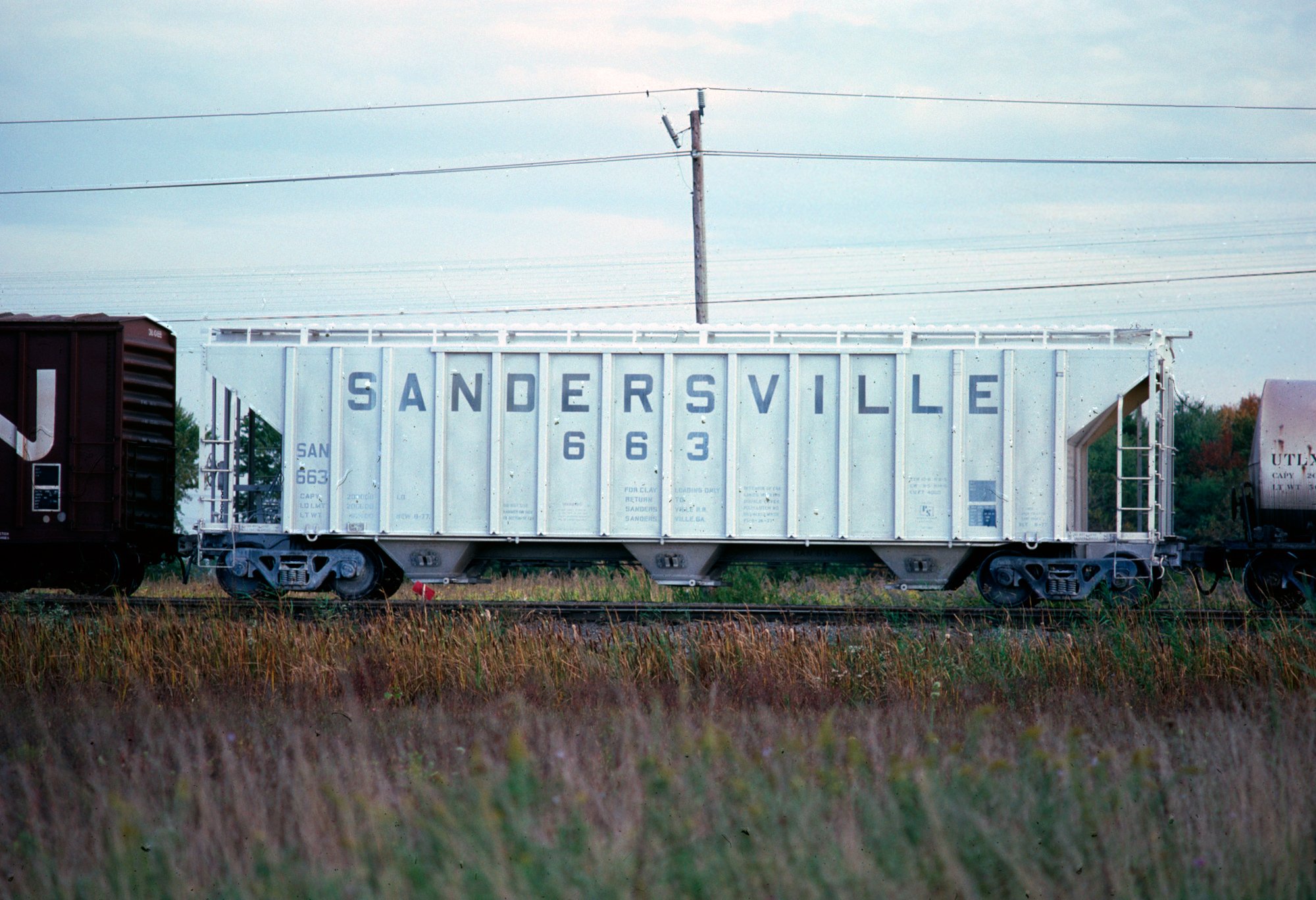 Sandersville Railroad three-bay covered hopper #663 is seen here in service during October of 1982. This particular car was used to handle the short line's primary traffic, kaolin, a type of clay found in east central Georgia that is used in a wide variety of products. American-Rails.com collection.

The history of the jenny can likely be traced to around the mid-1800s although as Mr. Schafer mentions in his book its widespread use did not begin until the end of that century when iron became commonly produced.

Later, the production of much stronger steel continued the need for the mining of iron, an essential component of steel.

In most ways the ore jenny is simply a miniature hopper, which could be found in service on many of the large Upper Midwest railroads which served mines in the region such as:

As the years go by the hopper car will undoubtedly become larger and more sophisticated.

Regardless of these changes the car will almost surely remain just as recognizable 50 years from now as it was 50 years ago; a platform capable of discharging a product quickly through bottom, angled chutes.