Fresh off of the success of its Silver Meteor, which hit the rails early in 1939, the Seaboard Air Line lined up another popular market to serve; Richmond, Virginia to Birmingham, Alabama.  The name it chose was the Silver Comet.

It took the Seaboard longer than the company had hoped to launch the new service due to resistance from the Pennsylvania Railroad, which provided through connection to New York City.

In many ways the Comet never reached the success of the Meteor since it faced stiff competition against Southern's popular Southerner. Despite this, the train still found success and Seaboard provided excellent service.

As patronage declined, SAL finally admitted defeat and cancelled the Cmet prior to 1970. Today, even the route the train traversed is no more having been abandoned by successor CSX Transportation in the late 1980s (ironically, there has been talk in recent years of reactivating this corridor for high speed rail). 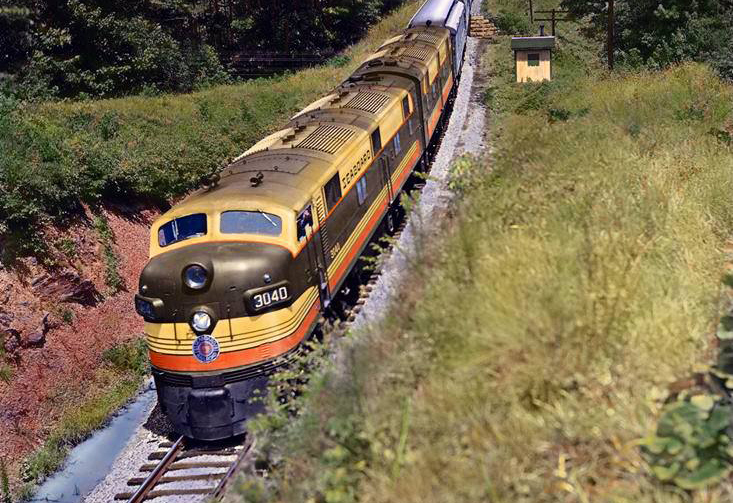 The history of the Comet dates back to 1939, soon after the Seaboard Air Line launched its new Silver Meteor streamliner that served New York and Miami. The railroad hoped to again work with the Pennsy in having this latest train serve New York.

However, the PRR was hesitant to do so in fears of upsetting the Southern, whose trains it also handled.  At the time the latter road was disinterested in streamliners

As such, by providing the SAL with interchange service the Pennsy worried about alienating its long-time partner. For the Seaboard's sake this apprehension went away for the PRR after the Southern finally adopted streamliners in 1941.

Interestingly, however, the SAL did not immediately launch the Silver Comet as it focused on other endeavors and other trains. Additionally, the onset of World War II precluded the railroad from purchasing any new equipment and focusing on new streamliners.

Soon after the war, however, the SAL finally launched the train on May 18, 1947 which was meant to compete directly with the Southern's Southerner, a train that would turn out to be only behind the Crescent in terms of importance and popularity on that railroad.

A 1952 consist of the "Silver Comet." Author's collection.

Despite the fact that the Comet required the partnership of the Pennsy to reach New York essentially operated all of the way through to the Big Apple.

In other words, once the Seaboard handed the train off to the Richmond, Fredericksburg & Potomac (which carried it to Washington, D.C. and a connection with the PRR) at Richmond, Virginia the entire consist continued northward.

The typical consist of the Comet included a baggage, reclining-seat coaches, a lounge, up to five sleepers, a diner, and an observation coach. At times the train could be quite lengthy, especially south of Richmond where the Seaboard often handled through cars of the RF&P and Pennsy.

From New York to Birmingham the entire length of the journey was just over 1,106 miles. Departing Pennsylvania Station at 12:45 P.M. the train arrived at Washington that evening and the Seaboard picked up the Comet from the RF&P a few hours later at Richmond around 7:58 P.M.

From there it traveled southwest towards Birmingham arriving about another 15 hours later at 10:45 A.M. the following. Total time aboard train was usually around 22 hours or just under one full day.

Unfortunately, the Silver Comet could not stay competitive against the Southerner. As Mike Schafer and Joe Welsh state in their book, Streamliners: History of a Railroad Icon, during the 1960s under Seaboard Coast Line direction the train sometimes offered nothing more than a single coach, diner-lounge, and sleeper.

Of course, having been launched so late behind its rival likely contributed to some of its ridership issues; the Southern was simply already well established and continued to offer the Southerner with high class service nearly until the startup of Amtrak in early 1971. The SCL would discontinue the Comet by June, 1969.