In 1935 the Milwaukee Road introduced the Hiawatha, sometimes referred to as the Twin Cities Hiawatha, a passenger train that would spawn a whole fleet of famous trains by the same name.

The original operated between Chicago and the Twin Cities and officially began service on May 29, 1935; one of the first streamlined trains ever to be introduced in the U.S. For the Milwaukee, the Hiawathas were virtually the only streamlined passenger trains operated by the railroad (they certainly were the most popular and well-remembered).

A Brief History Of The "Hiawatha" Service

The trains were both regional in nature and long-distance (Olympian Hiawatha and Midwest Hiawatha).  In addition, after October, 1955 the railroad handled Union Pacific's City fleet to and from Chicago.

Originally powered by 4-4-2 Atlantic-type steam locomotives (later 4-6-4 Hudson-types) the train was entirely streamlined, including the locomotive, and home-built in the Milwaukee Road's own shops.

These trains became instantly successful and regularly cruised over 100 mph with hardly a bump or shudder during the ride (both trains could make the jaunt between the two cities in roughly seven hours and the Milwaukee Road's trackside "Reduce to 90" signs are legendary). 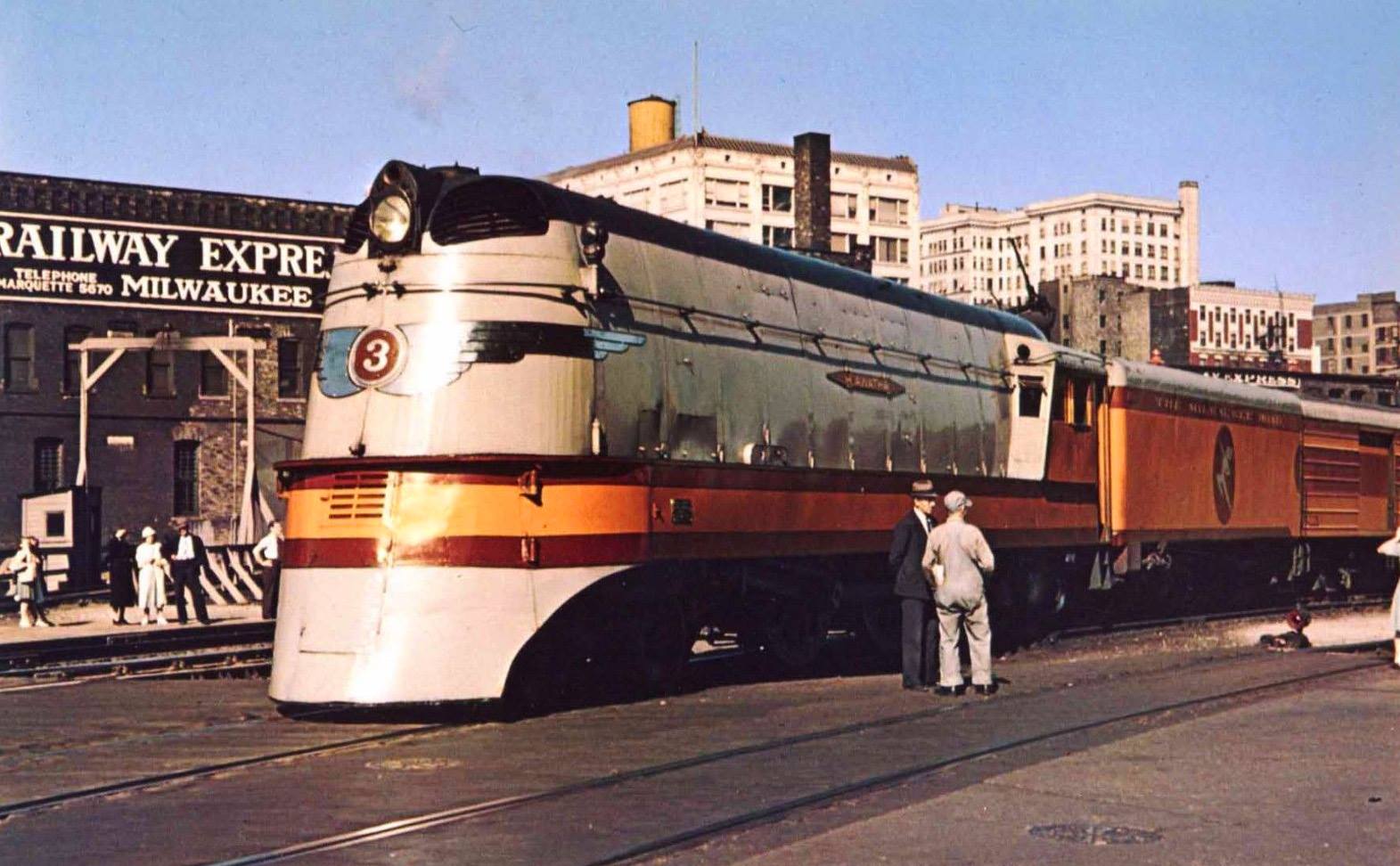 One of the Milwaukee Road's lightning fast Class A 4-4-2's, #3 (according to Jim Scribbins' book, "The Hiawatha Story," she was outshopped from Alco on May 21, 1936), is seen here during a quick station stop at Milwaukee, Wisconsin with the "Hiawatha" (Chicago - St. Paul/Minneapolis) on September 17, 1939. The Atlantic normally cruised at 100 mph and covered the entire 409 miles from Chicago to St. Paul in just 390 minutes (6 1/2 hours). To maintain its blistering schedule the railroad allowed just 2 minutes in Milwaukee for watering and handling passengers before the train was again on its way. Richard Kindig photo.

A Brief History Of The "Hiawatha" Service

The original Twin Cities Hiawatha was ingeniously conceived. Like many other famous streamlined passengers trains, which played on themes of either the geography in which they operated or historic cultures found within their region (such as the Santa Fe's Super Chief and the Great Northern's Empire Builder), so too did the Milwaukee Road's Hiawathas.

These trains were based from Native American cultures found in the upper Midwest region.  They became so successful the railroad found itself short on demand and to meet such eventually operated two versions of the train, the Morning Hiawatha and the Afternoon Hiawatha. 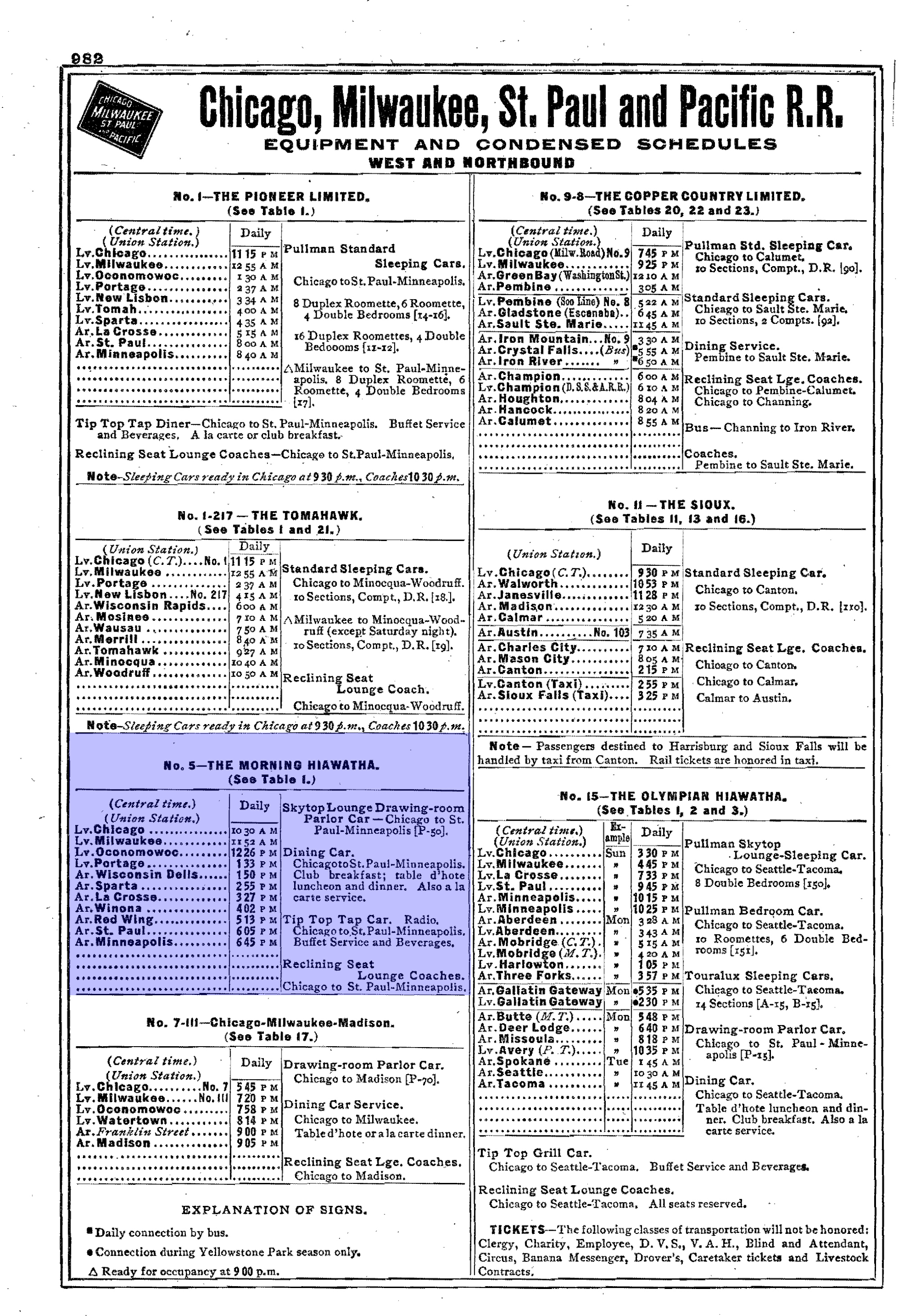 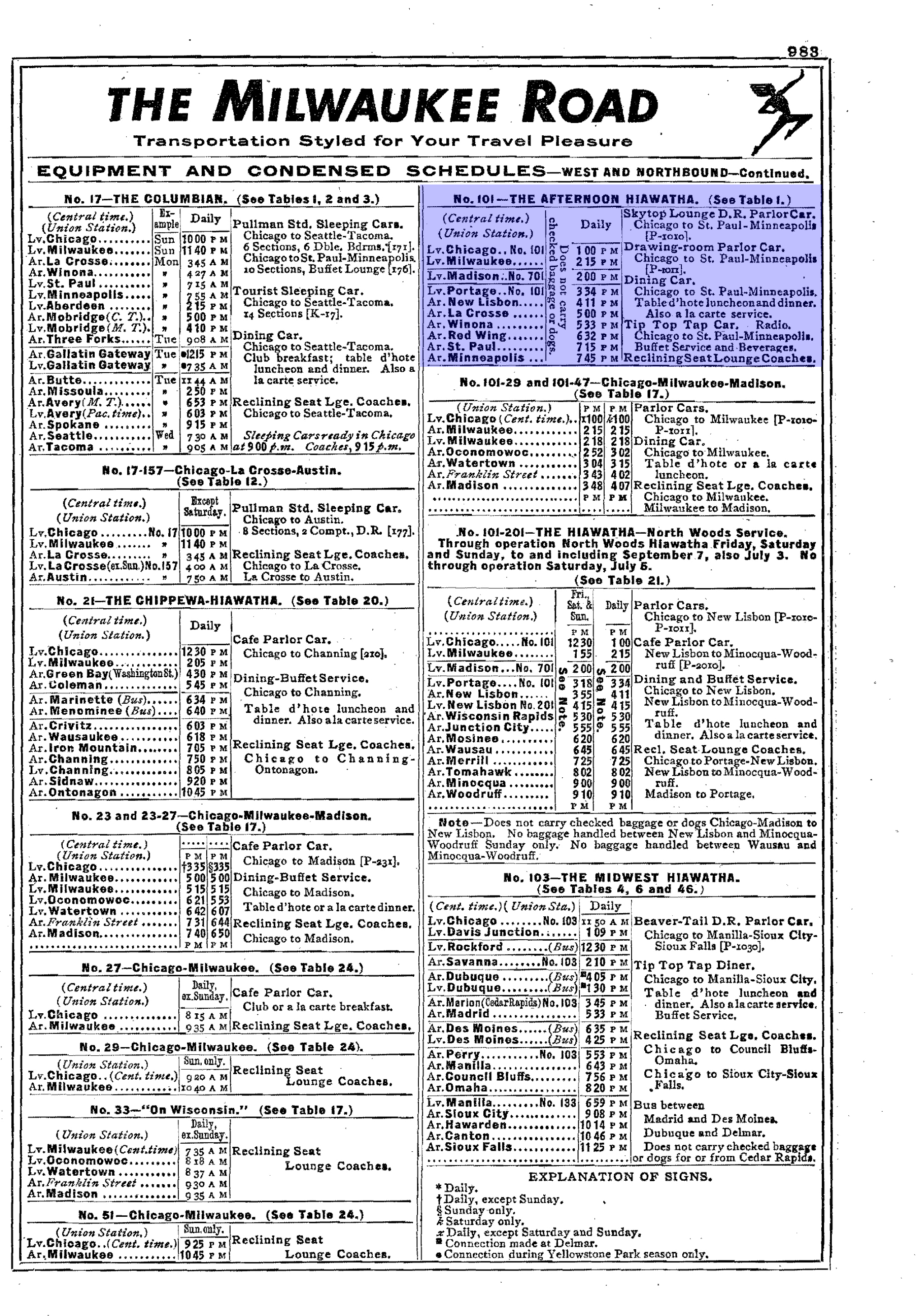 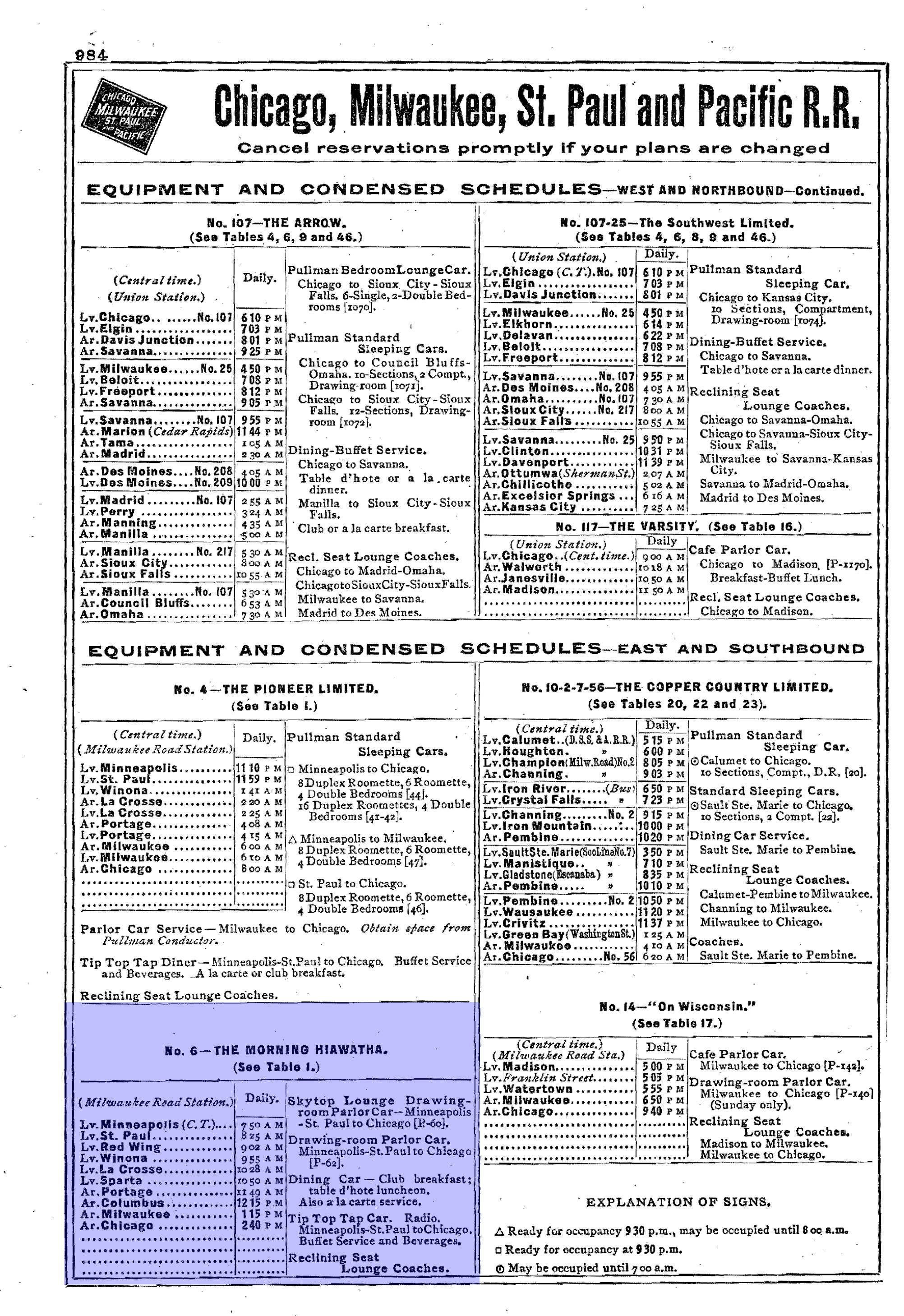 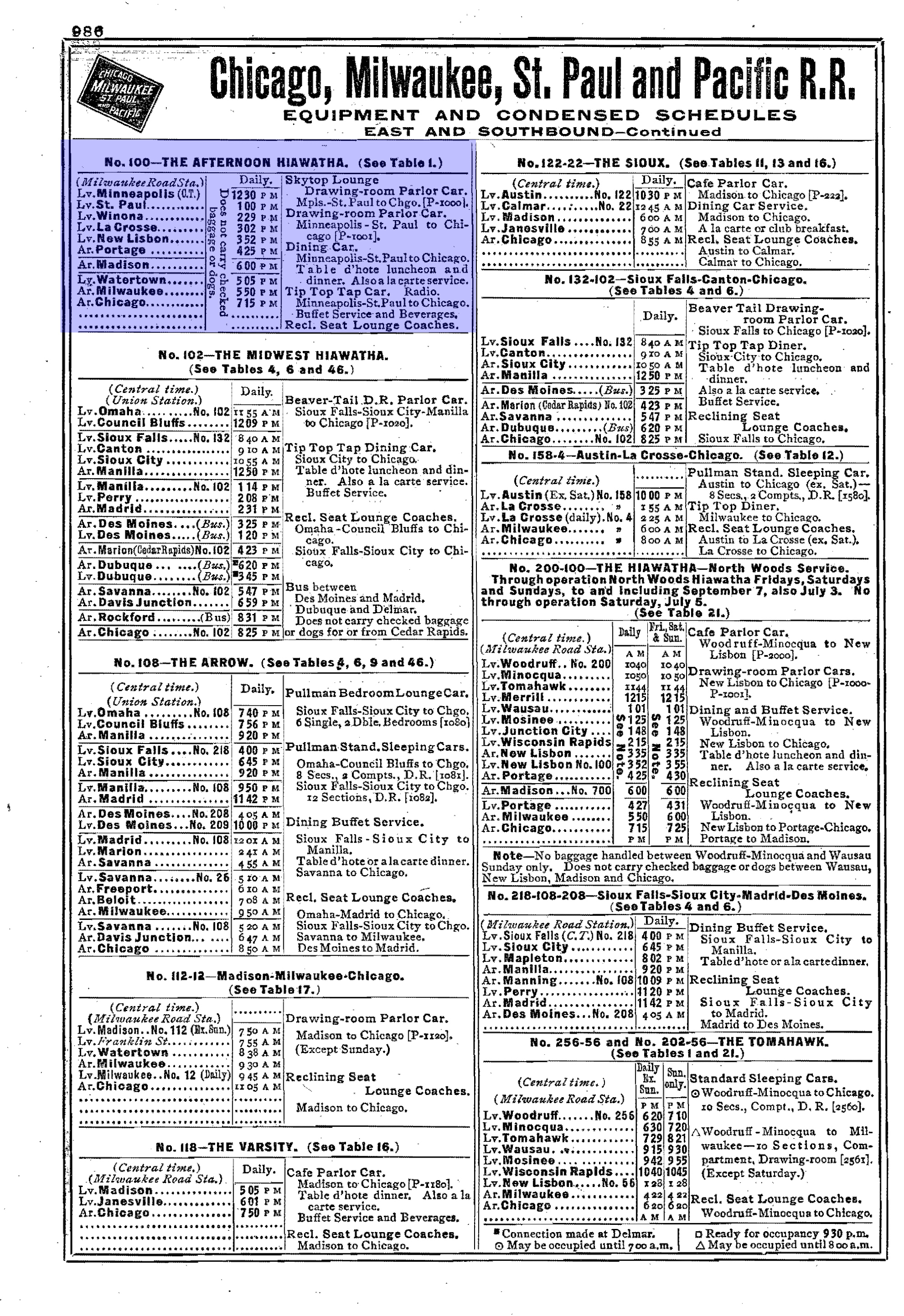 There were eventually four other versions of the trains operated in the Midwest. These included:

However, these Midwest versions were not the only Hiawathas the Milwaukee ever operated.  With the success of its regional Hiawathas, in 1947, about twelve years after the railroad first launched its Twin Cities Hiawatha the railroad introduced the streamlined Olympian Hiawatha.

This particular train was meant to fully compete with the Great Northern and Northern Pacific for rail travel to and from the Pacific Northwest (the Milwaukee had operated the transcontinental Olympian and Columbian since 1911 over its Pacific Extension but these trains used heavyweight equipment and were pulled by conventional steam locomotives). 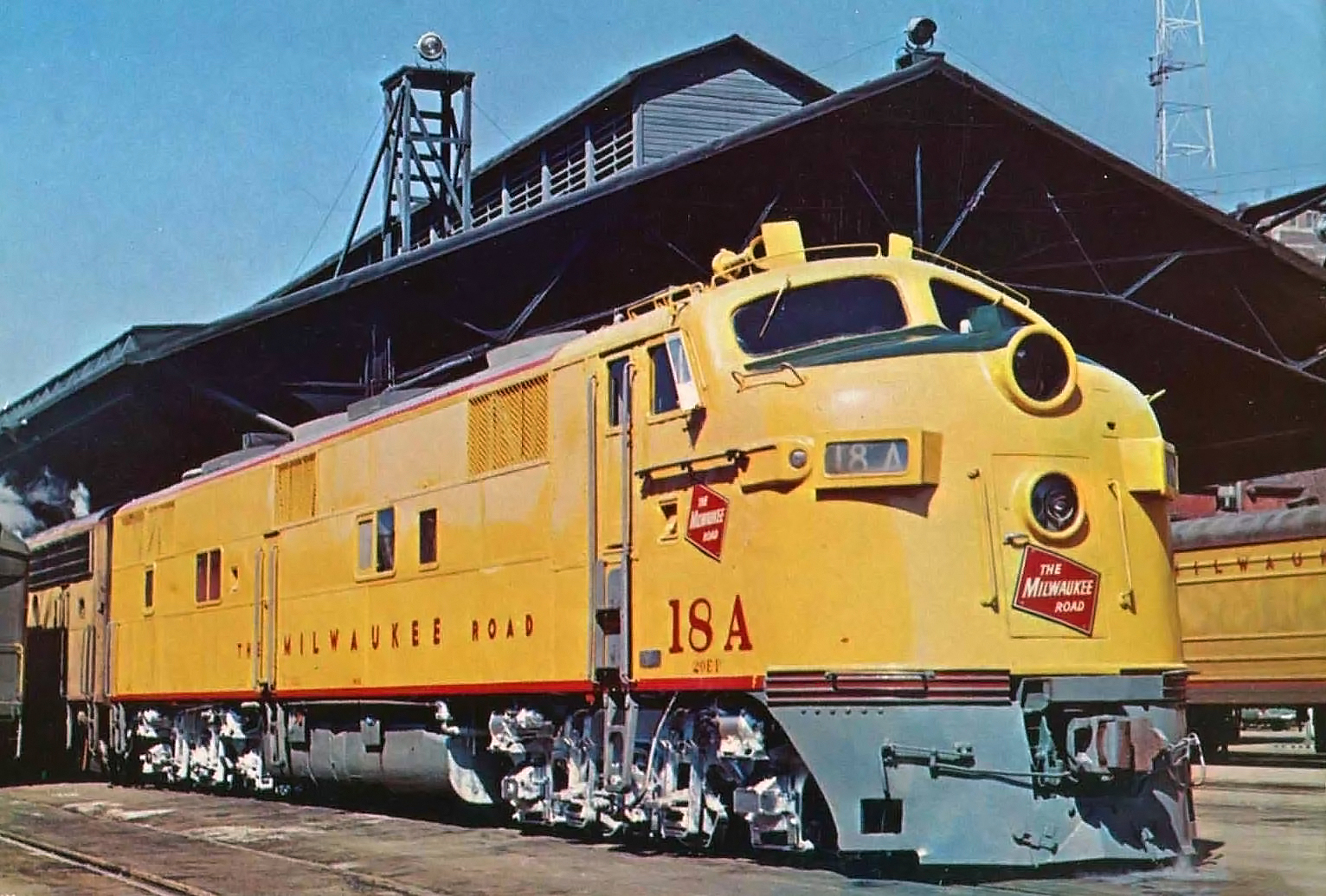 Milwaukee Road E7A #18-A is seen here in a fresh coat of Armour Yellow at Milwaukee, Wisconsin in 1964. Russ Porter photo. American-Rails.com collection.

The train featured a livery of two-tone orange and gray and the distinctive Beaver Tail parlor-observation car, a unique twist from the more traditional round-ended observations found on most other streamliners. 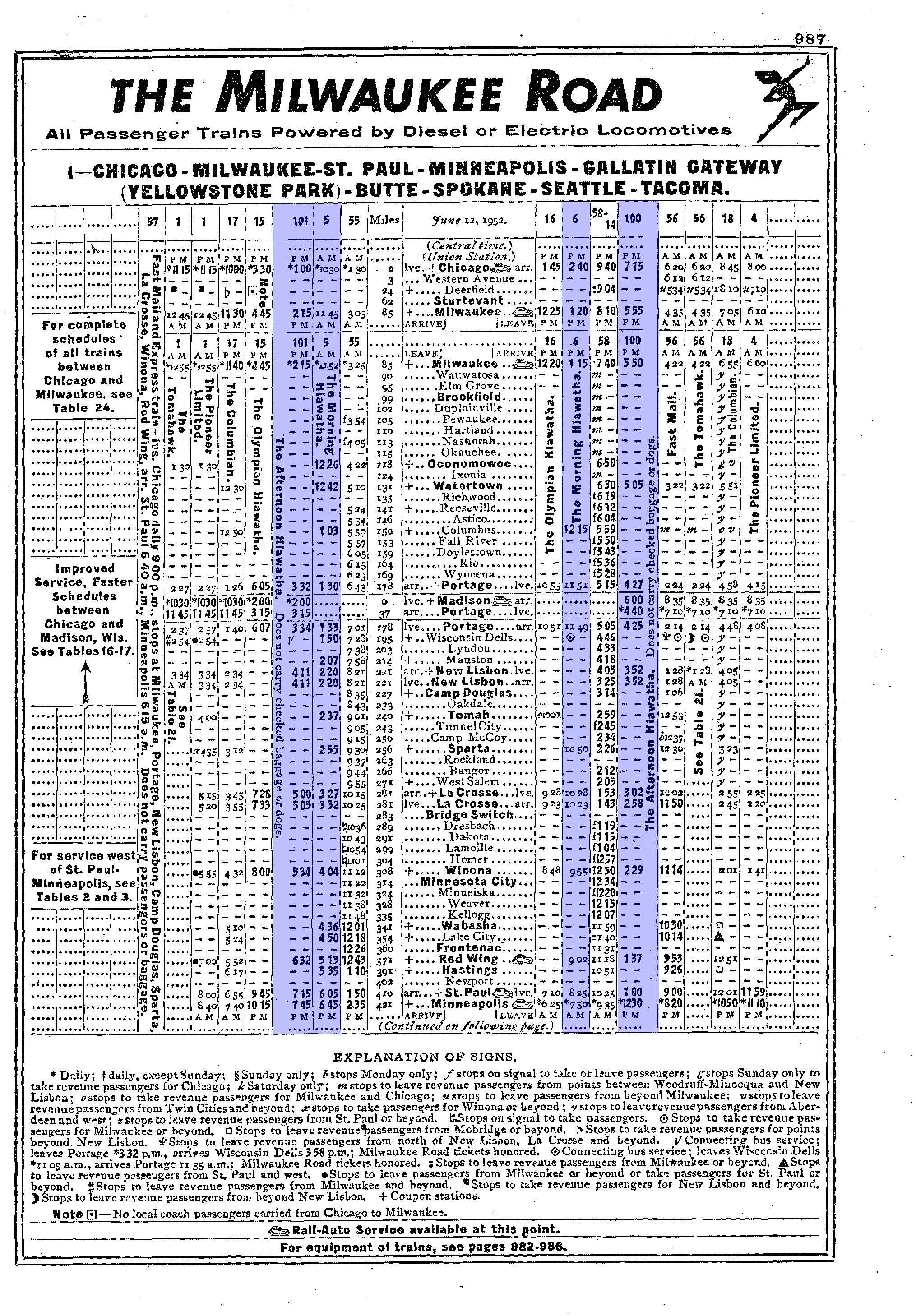 The Beaver Tail parlor-observations were later replaced with the celebrated Sky Top lounge-observations, perhaps the most distinctive and dramatic observation cars ever built.

Designed by industrial designer Brooks Stevens the rear of the cars featured a beautiful solarium lounge that afforded passengers unprecedented views of the outside world (the cars were also used on the Olympian Hi).

The, original, and blazing fast Atlantic steam locomotives use for power likewise received the Kuhler touch. The locomotive featured shrouding over most of its exterior with the running gear partially exposed at the bottom.

Perhaps the 4-4-2's unique feature was its round, bullet-shaped, nose that included wings across its flank with the locomotive's road number featured front and center. The tender was also eye-catching as it featured a very prominent Hiawatha emblem, one of the all-time classic railroad logos ever conceived. 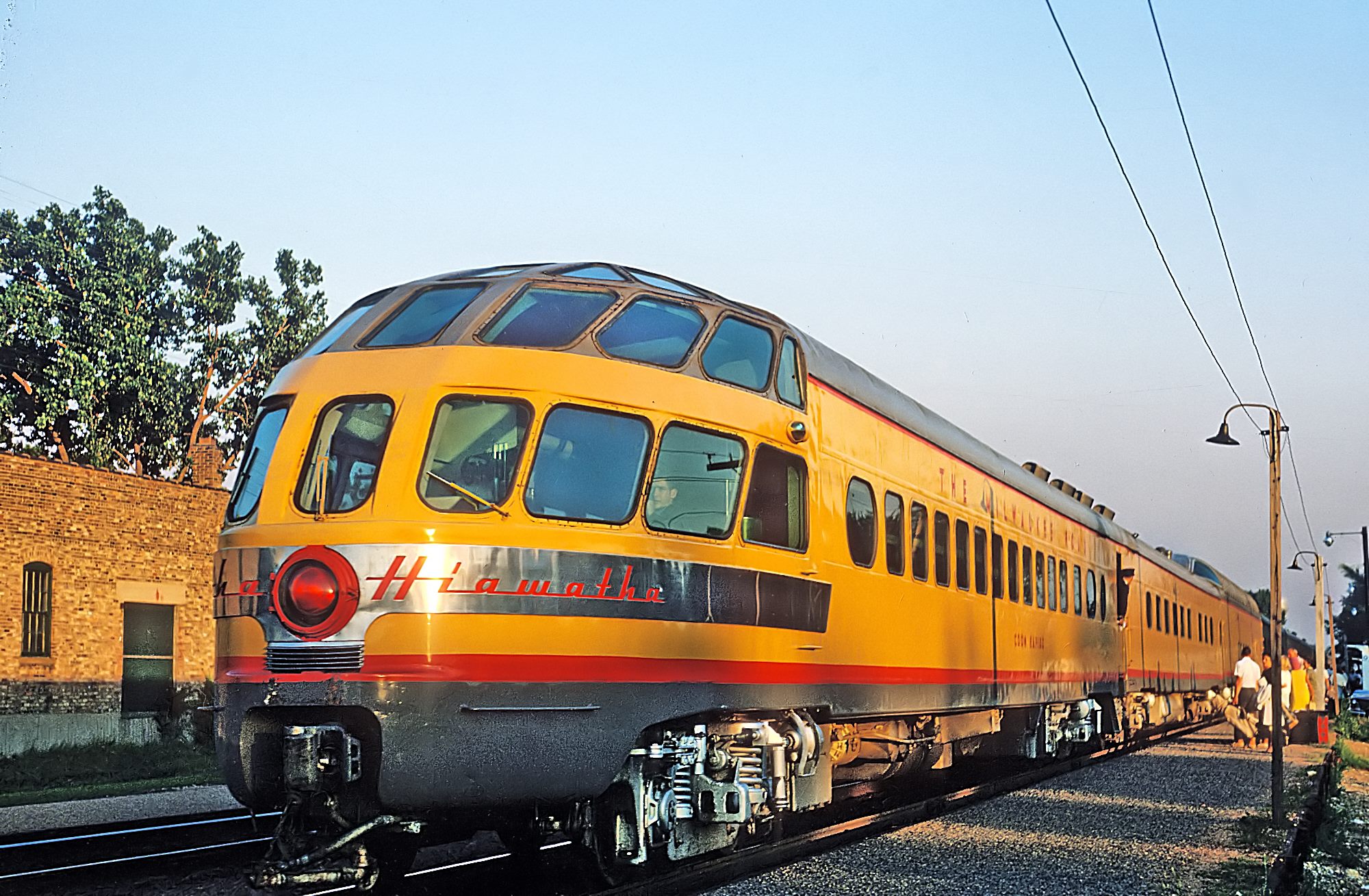 Milwaukee Road's Skytop-lounge "Coon Rapids" (12 solarium-seats/24-seats/drawing room) brings up the tail end of a "Hiawatha" (most likely train #100, the eastbound "Afternoon Hi" out of the Twin Cities) at Glenview, Illinois during an August evening in 1964. All four of these cars were either scrapped or retired by 1970 (the quartet was manufactured by the Milwaukee Shops in 1948). Roger Puta photo.

According to the Milwaukee Road's 1938 timetable, trains #101 (westbound departing Chicago) and #100 (eastbound departing Minneapolis) could make their journey between the two cities in a flat, seven hours averaging just over 60 mph! (For an average train speed this is incredibly fast.)

(The below Morning Hiawatha timetable from the Official Guide is dated effective December 7, 1969.  At this time both the Morning and Afternoon runs had notices on the schedule stating, "Application has been made to discontinue.  Ask agent for details.) 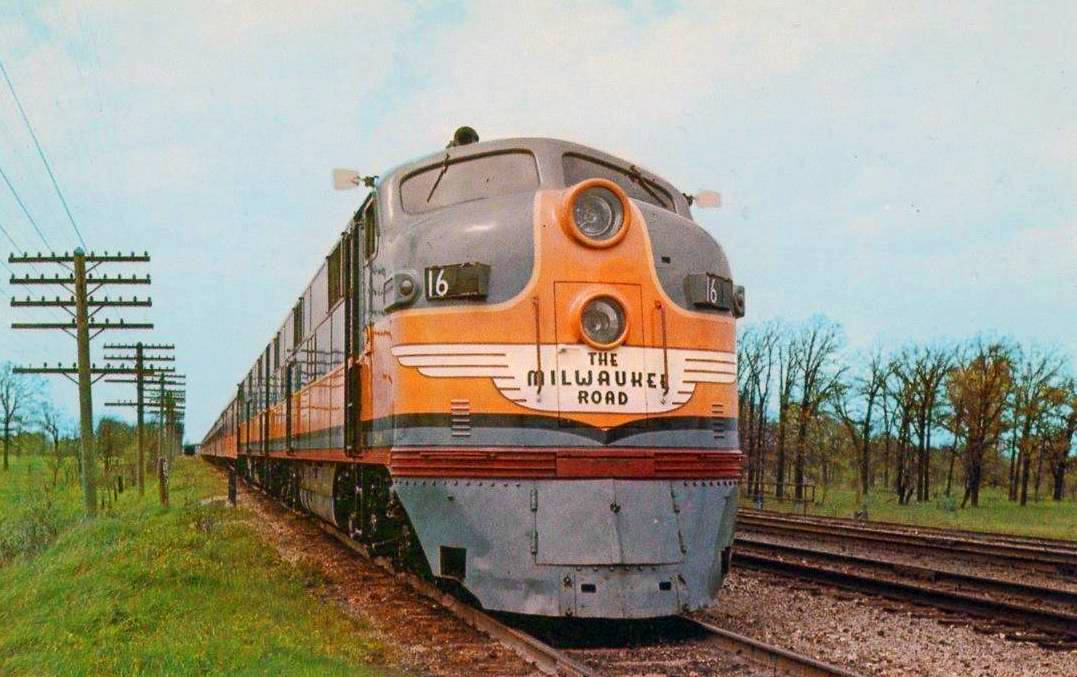 For the next 45 years the regional Hiawathas would soldier on under the Milwaukee Road, although after 1948 the railroad parked its venerable steam locomotives in favor of diesels using EMD's streamlined E6s and E9s.

The train was actually so popular that the railroad continued to upgrade it through 1952 and included services such as Super Dome service.

Today, one can no longer find the Midwest Hiawatha or Twin Cities Hiawatha hustling travelers across the Heartland, and Milwaukee's route to Omaha, Nebraska and Sioux City, South Dakota is now mostly an empty, weed-covered path slowly being reclaimed by Mother Nature.

However, a semblance of this once legendary service continues on under Amtrak offering Hiawatha regional trains between Milwaukee and Chicago.