During the heyday of streamliners there were many colorful and attractive trains to ride if you were heading south to sunny Florida and the Seaboard Air Line Railroad’s Silver Meteor was one of those.

While the Seaboard (also known as the SAL) kicked off the streamliner passenger train craze to serve southern destinations other railroads soon followed suit, like rival Atlantic Coast Line Railroad which inaugurated its New York-Miami Champion during late 1939, a few months after the Meteor.

Interestingly, it would be the train's name that would live on under Amtrak as the national passenger carrier discontinued the Champion in the late 1970s.

The ACL and SAL were perhaps the only two railroads in the country to serve markets so highly demanded by passengers.

Ever since the late 1800s when Florida became more accessible to the public (by means of Henry Flagler’s Florida East Coast Railway, which was chartered in 1895 to link the entire eastern shoreline of Florida), vacationers and travelers, particularly from the northern states, were enamored with its tropical weather, warm breezes, and beautiful beaches. 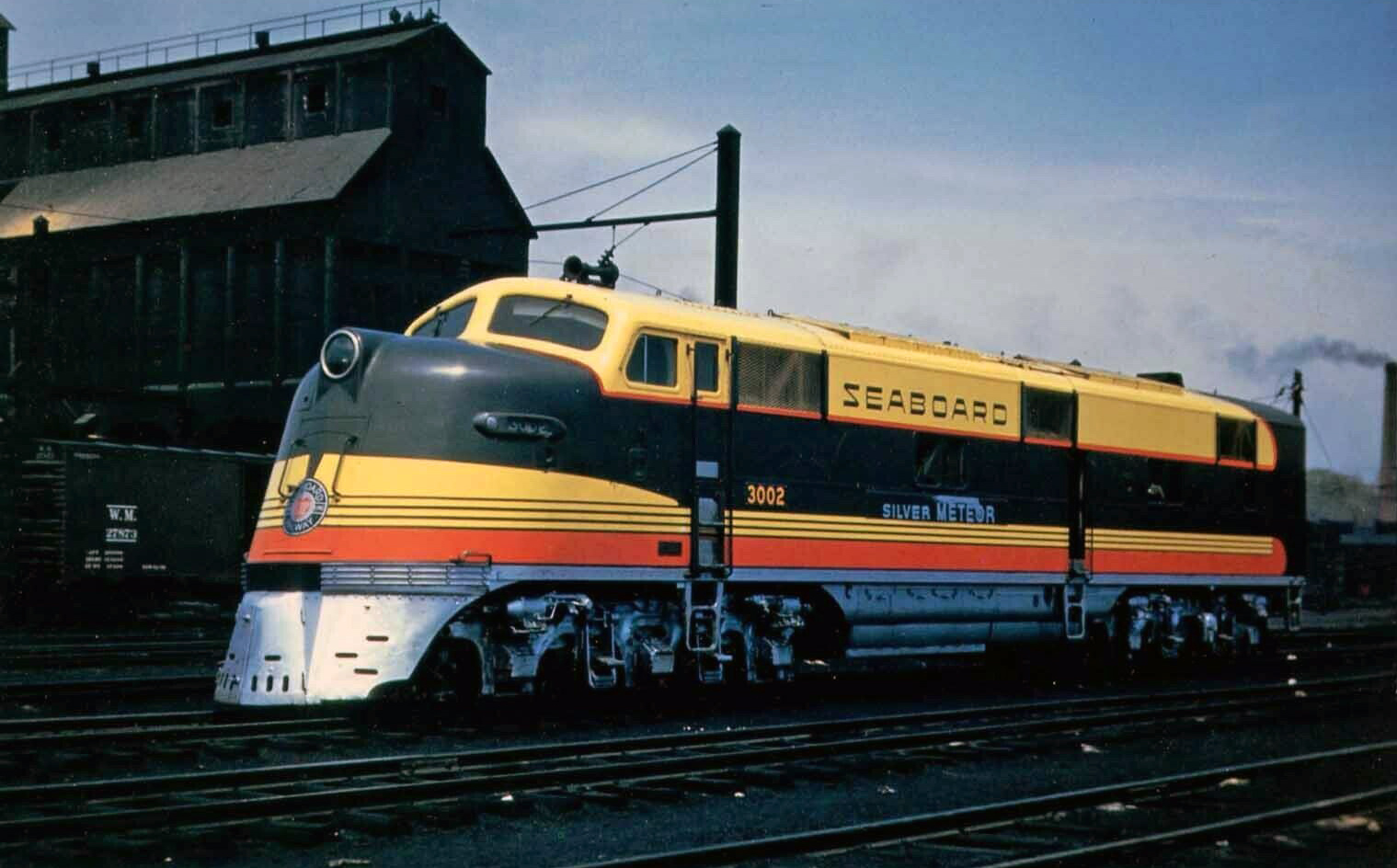 Seaboard Air Line E4A #3002 provides a brilliant splash of color to the Ivy City engine terminal in Washington, D.C. on May 6, 1940 at 12:35 PM as it awaits its next assignment pulling the "Silver Meteor." Leonard W. Rice photo.

This tropical climate gave both railroads an unprecedented marketing advantage not found on most other systems. Even as passenger train traffic took serious hits beginning in the 1950s from highways and airlines, across the industry both the Seaboard Air Line and Atlantic Coast Line Railroads continued to earn strong revenue with their Florida-bound trains all of the way up through the 1960s!

Each company had the vacation market cornered and were the only railroads to provide direct service to Florida via the Mid-Atlantic region (as well as Midwestern areas via connections).

A testament to this popularity can be seen in the number of passenger trains both railroads offered to points south.

The Seaboard offered such trains as:

While service to Florida had been brisk for both railroads for decades, it wasn’t until the streamlined, and very colorful, Seaboard Air Line Meteor debuted on February 2, 1939 did southern passenger railroading take on a whole new level of service.

The original version of the Silver Meteor was a lightweight, seven car, all-coach affair (including diner service). However, although it was only all-coach service, it was extremely successful.

A 1958 "Silver Meteor" consist, which includes the "Sun Lounge" sleeper-lounge cars that had arrived in 1956.

Advertised as an overnight train between New York/Boston and Miami (with through sleeper service available via the Pennsylvania and New Haven railroads) it featured stainless-steel cars (built by the Budd Company) with livery adorning the new EMD E4 diesel locomotives, which was as colorful and bright as Florida itself.

The classic paint scheme featured blends of bright yellow and orange with a center color of very dark green with bright silver featured along the bottom (including the trucks).

The bright livery adorning the Meteor became a signature feature of both the ACL and SAL Florida-bound trains as they exuded bright, cheery themes meant to give passengers a glimpse of the sub-tropical/tropical weather in which they were heading.

The success of the original Meteor meant that the train would not remain an all-coach only affair for long. After World War II it was upgraded with features such as sleepers and lounges (including the 1956 introduction of the “Sun Lounge”, a car with glass ceilings to allow in natural light; clearance restrictions prevented domes to New York City) giving the train much more diversity and options for passengers.

A typical consist during the late 1950s included reclining-seat coaches, a diner, lounge, sleepers, and tavern observation. Listed as Trains #57 (southbound) and #58 (northbound) on Seaboard's timetable, the Silver Meteor would depart Pennsylvania Station at 2:55 pm, powered by PRR GG1s until reaching Washington, D.C. where the train was handed off, about four hours later, to the Richmond, Fredericksburg & Potomac.

The RF&P carried the train another few hours until reaching Richmond's Main Street Station before 10 pm. From this point the Seaboard carried its train the rest of the way to Florida, arriving in Miami by nearly 5 pm the next day (the train also provided connecting service to Tampa, Venice, and St. Petersburg). 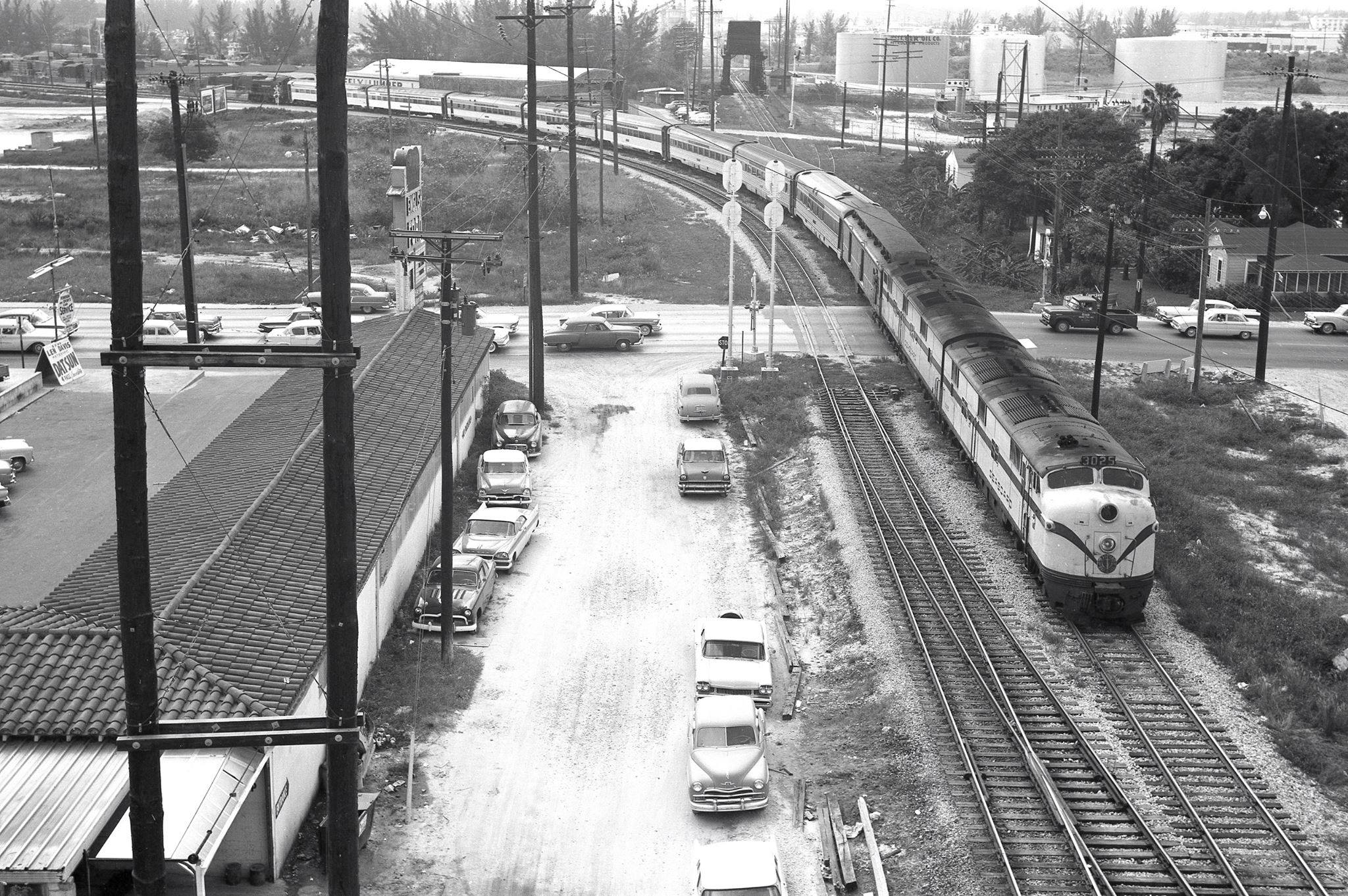 An A-B set of Seaboard Air Line E7's have what may be the "Silver Meteor" (New York - Miami/St. Petersburg/Venice/Fort Meyers) at the Hialeah Market in Miami, Florida during the 1960s. Warren Calloway photo.

Much like the Atlantic Coast Line, the Seaboard Air Line Railroad took great pride in its passenger train operations and they remained flawlessly operated with excellent service until the SAL disappeared into the Seaboard Coast Line in 1967.

Under the SCL high quality service was retained (although the train's livery was a much more subdued black with yellow trim) as one could still purchase sleeper service to New York/Boston and the train retained its diner, reclining-seat coaches, and tavern-observation lounge.

As a testament to the SAL’s high quality of passenger operations and lucrative southern market, Amtrak continues to operate several of its trains including the Meteor (as well as the Silver Star), and in 1979 elected to discontinue the Atlantic Coast Line's Champion.