The New River Train was a unique seasonal excursion hosted from 1966 through 2018. It began as a joint venture between the Collis P. Huntington chapter (founded in 1959) of the National Railway Historical Society (NRHS), based in Huntington, West Virginia, and the Chesapeake & Ohio.

At the time, freight railroads not only still maintained passenger service but were also receptive and friendly towards public excursions.

Most were sponsored by NRHS chapters and other early enthusiast organizations.  For its part the C&O was always gracious towards such trips, hosting many across its system.

Those who organized the New River Train probably didn't realize it would blossom into one of the most popular and run for more than a half-century!

During its peak years, which lasted through the 1990's, several special locomotives pulled the train such as Delaware & Hudson's venerable PA diesels, Chesapeake & Ohio 4-8-4 #614, and even streamlined E8's of C&O heritage.

Alas, trouble came swift and fast following Richard Anderson's ascension to the Amtrak presidency in 2017.  He implemented steep car tariff hikes, making the train unprofitable and its final run occurred in 2018.  The train has since returned as the Autumn Colors Express. 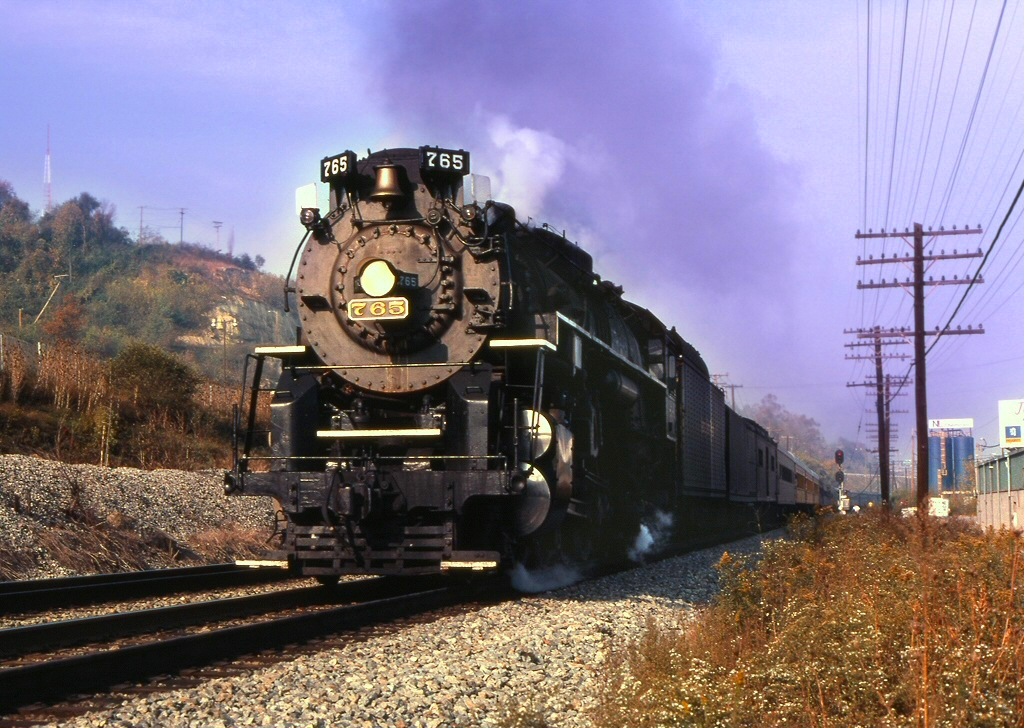 As railroads transitioned from steam to diesel power, excursions pulled by the former grew in popularity.  Railroads like the Chicago, Burlington & Quincy; Baltimore & Ohio; Union Pacific; and Canadian National all hosted trips during steam's twilight.

The Milwaukee Road even ran special excursions on its electrified trackage out west. Such events were not limited only to the big Class I's; short lines, such as West Virginia's Buffalo Creek & Gauley, also pulled fan trips behind its workhorse 2-8-0's.

Into the 1960's, many railroads continued to host public outings, sometimes behind venerable diesel models like Alco's PA model (Santa Fe and Delaware & Hudson) and Electro-Motive's streamlined E's and F's.

The Virginia's were a particularly popular location thanks to the Appalachian Mountains' breathtaking scenery.  The Western Maryland, C&O, B&O, and Virginian Railway all hosted such trips during the '50s, '60s, and '70s.

At a time when the NRHS chapters were much more involved in such trips, and railroads much more receptive, it was quite common to witness these events throughout the country.

America was a different, much less litigious place back then; one could freely enjoy cab rides and visit yards/terminals without worry.

Being no stranger to the excursion experience, the C&O was very open to running fall foliage trips along its New River Gorge main line when approached by the Collis P. Huntington Chapter.

In his article, "New River Train: West Virginia Has Been Home To The Greatest Fall-Foliage Excursion Of Them All," author and historian Lloyd Lewis notes what was dubbed the New River Train enjoyed its first trip from Huntington on May 15, 1966.

The railroad, and C.P. Huntington chapter, went all out on these initial runs, which covered 294 miles from Huntington to Hinton, and back.

The train was pulled by a pair of sparkling E8A's and included:

The latter was later replaced with a heavyweight cafeteria car to provide additional food options.  The C&O went the extra mile to make sure the train was all-matching, adorned in the railroad's handsome blue, gold, and grey livery.

A ticket for the first New River Train cost $9, or a little over $70 in today's money.  For many, the price was more than reasonable as the train proved quite popular. 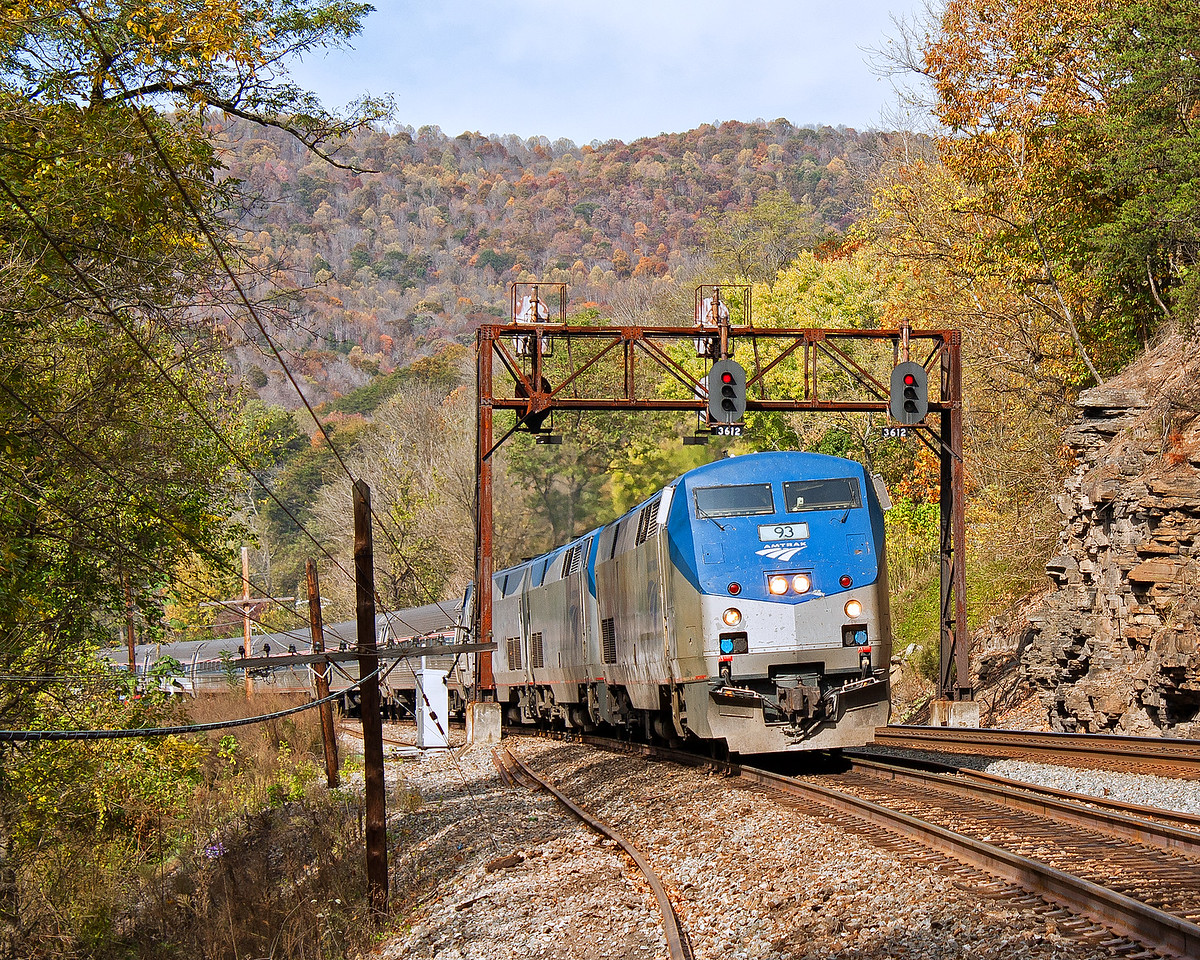 Few other excursions enjoyed such sustained success like the New River Train.  Those who planned it likely never imagined it would still be running in the 21st century.

While the breathtaking scenery certainly played a large part in its longevity another was the chapter's ability to keep things fresh and interesting.

While E's on the head-end were a sight to see even in 1966, future trips offered much more.   It began with the Delaware & Hudson's celebrity pair of striking PA-4's which pulled the 1971 train.

The D&H had picked up these handsome locomotives from the Santa Fe in 1968 and later had them rebuilt with upgraded prime movers (the original Alco model 244 diesel was replaced with the more reliable 251F variant) by Morrison-Knudsen in 1975.

The D&H maintained the Santa Fe's "Warbonnet" design but replaced the red with the railroad's trademark blue.  It was a striking and sleek look for what was merely an excursion!  The PA's were no stranger to fan trips either as the D&H often used them in similar events.

Next came the 1977 "Chessie Steam Special," which were excursions hosted by the Chessie System to celebrate the railroad's sesquicentennial (the B&O was formed on February 28, 1827).

It was all thanks to President Hays T. Watkins, a purveyor of railroad history, who wished to pay homage to its heritage. The steam locomotive chosen for the event was Reading 4-8-4 #2101 (T-1).

Even the cars wore a matching Chessie paint scheme making the entire affair quite striking for anyone watching it pass.  Steam returned to the gorge three years later in 1980 when Ross Rowland's Chesapeake & Ohio 4-8-4 #614 was given the honors.

The large "Greenbrier" was a sight to behold steaming its way along the New River, trailing a matching set of Chessie System cars.  It ran again in 1981.

The following year diesels were back, but not just any diesels.  This time a pair of beautifully repainted Baltimore & Ohio GP9's bedecked in brilliant Chessie paint were out front.

As the 1980's wound onward, the New River Train saw new cars appear which vastly improved the overall experience.  Many were streamlined and included domes, parlors, an observation, and business cars.

There were even first class accommodations.  Some of the equipment was owned by the Collis P. Huntington Chapter while the group also allowed private cars (for a price, of course).

This particular locomotive was invited again and again as Chessie System, and later CSX Transportation, would allow no other steam power on its system.

It proved an omen of things to come.  The steam locomotive's popularity was unquestioned as #765's trains were sometimes as long as 35 cars, nearly unprecedented for a passenger train.

The next candidates chosen were a pair of historic Electro-Motive units.  In 1989, CSX  F units of Clinchfield heritage, then being used as part of the company's official business train, were on point wearing a simple yet elegant livery of grey and blue.

The 1993 season saw the locomotive renumbered and re-lettered as Chesapeake & Ohio 2-8-4 "Kanawha" #2765.  That particular unit was built by American Locomotive in 1947 as both railroads' 2-8-4's were nearly identical.

Under common ownership by the Van Sweringens for nearly two decades, what was known as the Advisory Mechanical Committee was formed to establish standardization in Super Power steam designs.

It was Milwaukee Road 4-8-4 #261 which hosted the final trips under steam, doing so in 1994. With it, interest waned but the train's many years of success saw patronage remain strong for the next few decades.

Aside from the fall foliage, patrons could enjoy views of Huntington (here, glimpses of preserved Chesapeake & Ohio 2-6-6-2 #1308, a 1949 product of Baldwin Locomotive, can be seen), St. Albans, and Charleston.

This region of the Kanawha River Valley is relatively well developed offering guests both urban and natural views.  West of Montgomery at a point known as Gauley, near the New River's Great Falls, the C&O main line officially enters the gorge (regarded as one of the world's oldest river systems).

Mountain walls soar nearly 600 feet above the tracks here and at Hawks Nest State Park one understands why this region draws so many tourists.

Only a few miles to the southeast the train ducks under the massive New River Gorge Bridge, one of the world's longest single-span arch bridges.

It is 1,700 feet long and situated 876 feet above the river.  From this point into Hinton, guests enjoy the region's natural beauty of river rapids and Appalachian splendor. 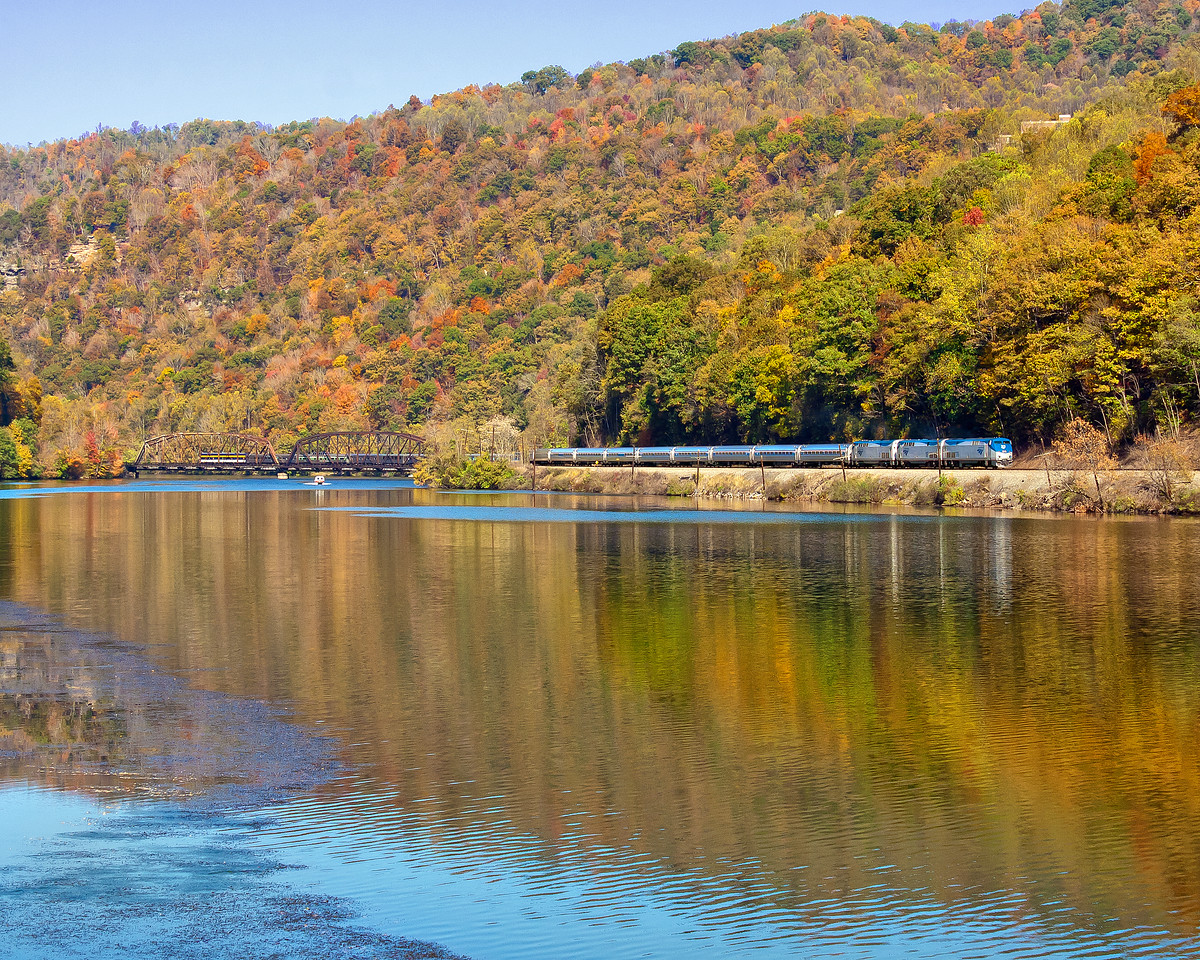 While the Collis P. Huntington has experienced financial deficits since 2006, the primary culprit in the New River Train's cancellation was Amtrak.

Under new president Richard Anderson the company has been increasingly hostile and uncooperative to museums, NRHS chapters, and any other group(s) attempting to host excursions on Class I trackage (only allowed because of Amtrak's charter).

The carrier has raised car tariffs so steeply that many no longer find it financially feasible, including private car owners.

This has been no different for the C.P. Huntington chapter, which cannot afford the stiff price hikes.  To make matters worse, despite stating in 2018 it wished to see the New River Train continue, Amtrak has made no concessions or attempts to soften its stance.

Hopefully, the carrier will eventually have a change of heart.  Without it, the train is unlikely to operate again.  If not, it will prove a major blow to the region's economy (particularly Hinton's Railroad Days) as roughly 5,000 riders patronized the train each year.

To learn more about the C.P. Huntington chapter and the New River Train please click here.