The then Chicago, Milwaukee & St. Paul Railroad had been in operation since the late 1840's with a heritage dating back to the tiny Milwaukee & Mississippi Railroad which served its namesake city. By the 1880s the CM&StP had stretched to a more than 5,000-mile system reaching several Midwestern states.

However, as the railroad's top management saw it, this was a problem. To effectively compete with rivals Northern Pacific and Great Northern Railways the CM&StP felt it needed its own line to the west coast instead of simply receiving meager interchange traffic, which garnered little money as long-haul freight was where the profits truly were.

The Milwaukee Road was not your typical Midwestern granger, or railroad in general.  Even by the early 20th century most major Class I's were under the control of handful of men, names like Gould, Hill, and Harriman.

But not the Milwaukee; until its untimely end in 1985 the company was independent of these influential individuals, even staving off a potential buyout by James Hill. 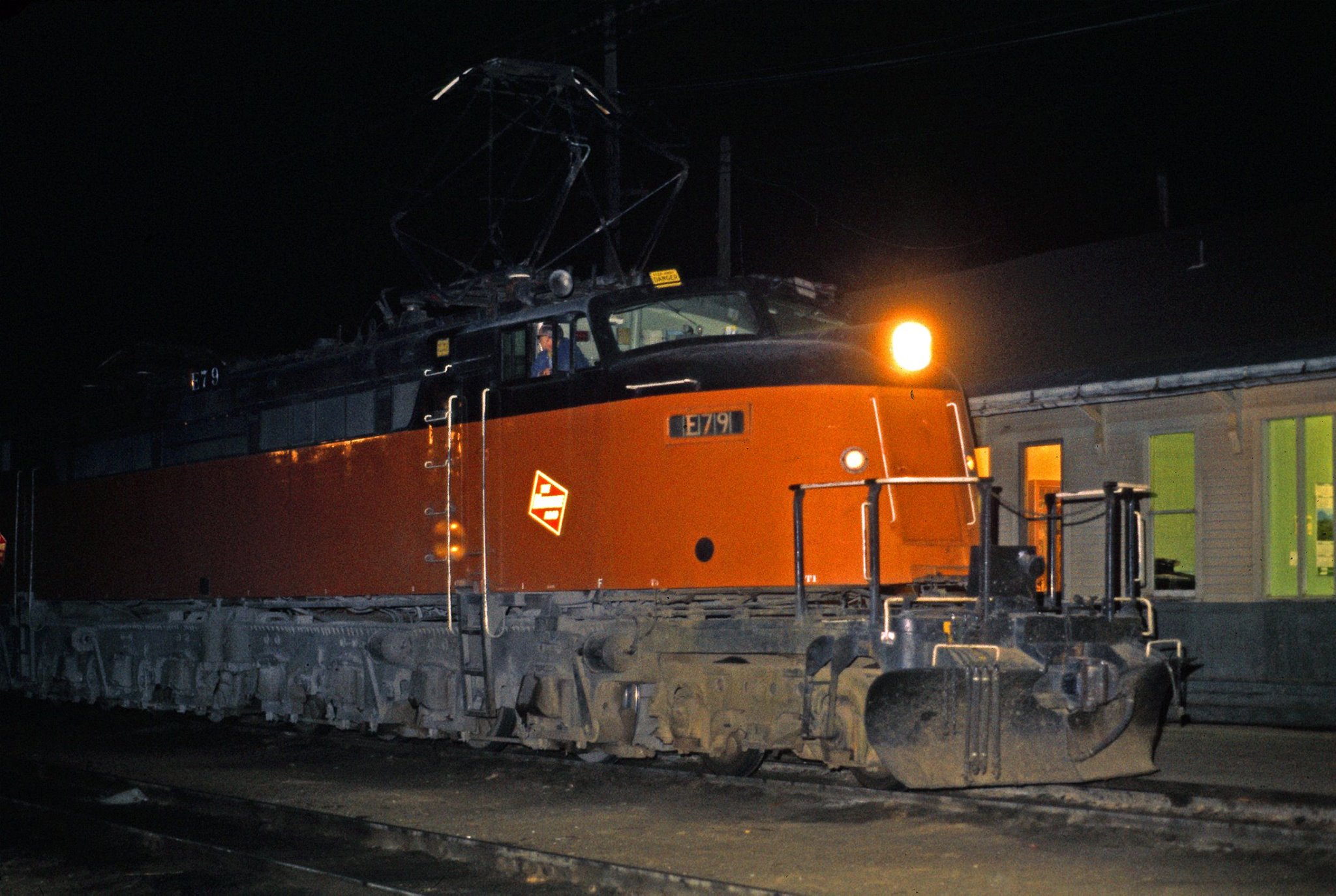 Milwaukee Road "Little Joe" E-79 awaits departure from Avery, Idaho as the engineer looks on during an August night in 1971. Drew Jacksich photo.

What made the extension so terribly expensive was partly due to the right-of-way costs. Unlike the GN and NP the CM&StP was not given free government land grants and had to both purchase all of its land from private landowners as well as take over a number of small, new, or floundering railroads across the region.

Still, this did not hinder the effort and in 1905 the railroad's board approved the building of what would become known as the Pacific Coast, or Puget Sound Extension.

A year later in 1906 the actual construction on the western extension commenced with the railroad itself building west from its western-most terminus at the time, tiny MoBridge, South Dakota reaching more than 1,000 miles into western Montana.

From Seattle, heading east, the line was constructed by contractor Horace Chapin Henry, which completed the 450-mile stretch into western Montana.

Amazingly, in just three short years the entire extension had been completed and on May 19, 1909 a Golden Spike was driven at Garrison, Montana commemorating the opening of the new route.   Not only was the line built in record time but it also was an engineering marvel.

While the Puget Sound Extension would ultimately cross no less than five different mountain ranges on its way to Seattle including the Belts, Bitterroots, Cascades, Rockies, and Saddles it did so at a much lower ruling grade than its competitors.

The line would also be at least 18 miles shorter than either the NP's or GN's, and traveled through fewer population centers cutting down transit times even further, as well as giving the CM&StP a more direct route. 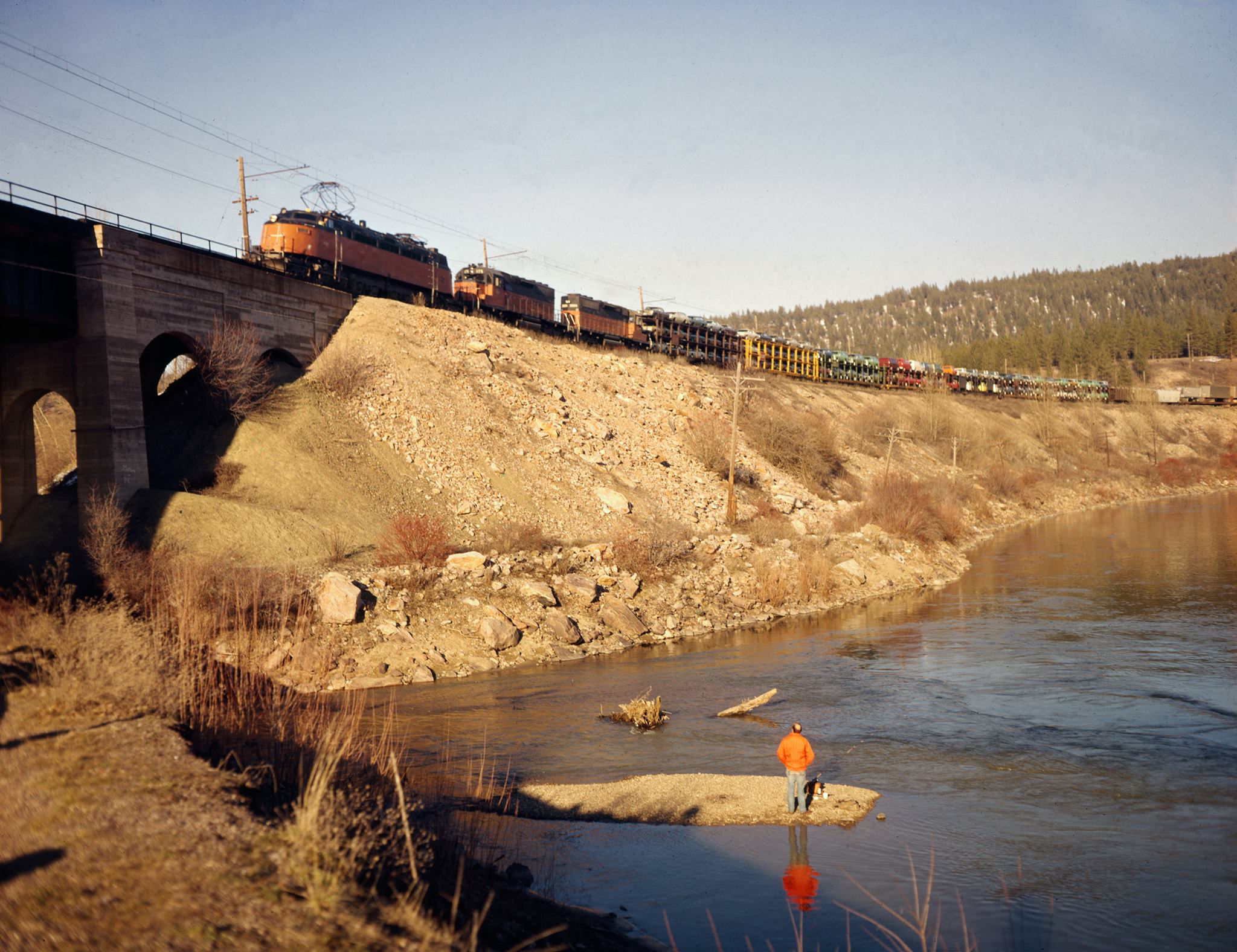 A fisherman casually watches Milwaukee Road's westbound time freight #261, led by a "Little Joe" and SD40-2's #175 and #3000, cross the Frontage Road overpass near the Clark Fork River at Nine Mile, Montana in 1973. Today, the abutments remain but the bridge has been removed. Ron Nixon photo.

Perhaps, though, most advantageous was the fact the railroad now could boast that it was the only true transcontinental whose own rails stretched from Chicago to Seattle (the Northern Pacific and Great Northern's lines reached only as far east as the Twin Cities meaning they had to transfer their traffic over to the CM&StP or ally Chicago, Burlington & Quincy for the rest of the journey).

Less than two months after the Extension was completed it opened to freight traffic on July 4, 1909. However, it wasn't until a year later on July 10, 1910 that the first passenger trains rolled over the new line.

In an attempt to compete with the GN and NP for dominance in the transcontinental passenger market the CM&StP unveiled their new heavyweight trains the Columbian and Olympian with the latter being the flagship of the fleet. 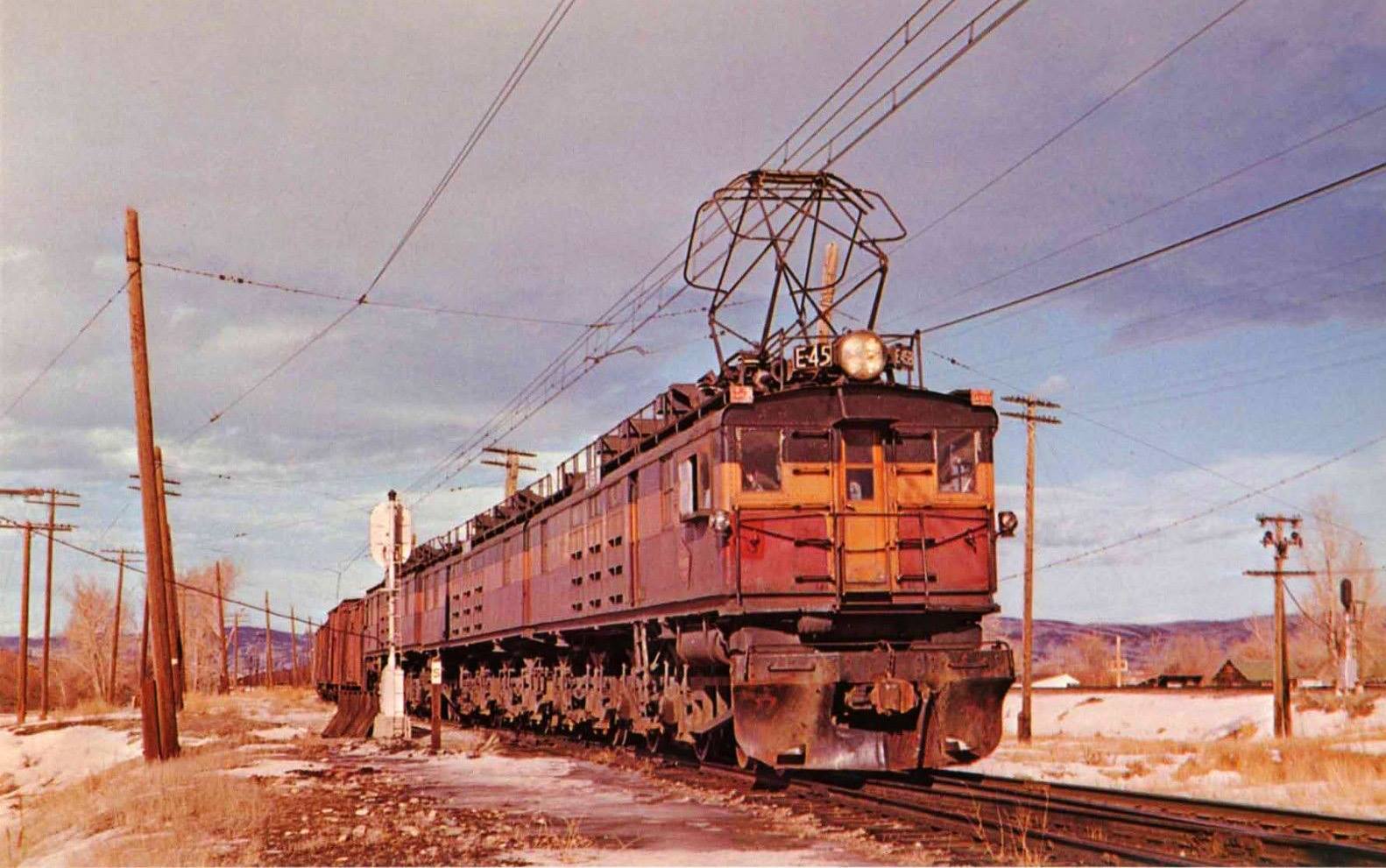 Just a few years after the new transcontinental line had opened the CM&StP quickly discovered how difficult it was to operate trains through rugged mountain ranges, even on a route so well engineered, and decided in an unprecedented move to electrify significant sections of the route.

Thus, the legend of the Milwaukee Road was born.  Construction on the first phase of electrification project began in 1914 at Harlowton, Montana and would reach into the northwestern region of Idaho at Avery.

This first section was completed in November, 1916, and in 1917 the railroad would also electrify its main line between Othello and Seattle, Washington with the final wires strung and completed by July of 1927 reaching Seattle Union Station in the downtown district of the city (this station was shared with Union Pacific and today still stands, restored).

There would remain a "gap" between Avery and Othello that would never be electrified, initially because the railroad just didn't have the money, even though it was often considered. 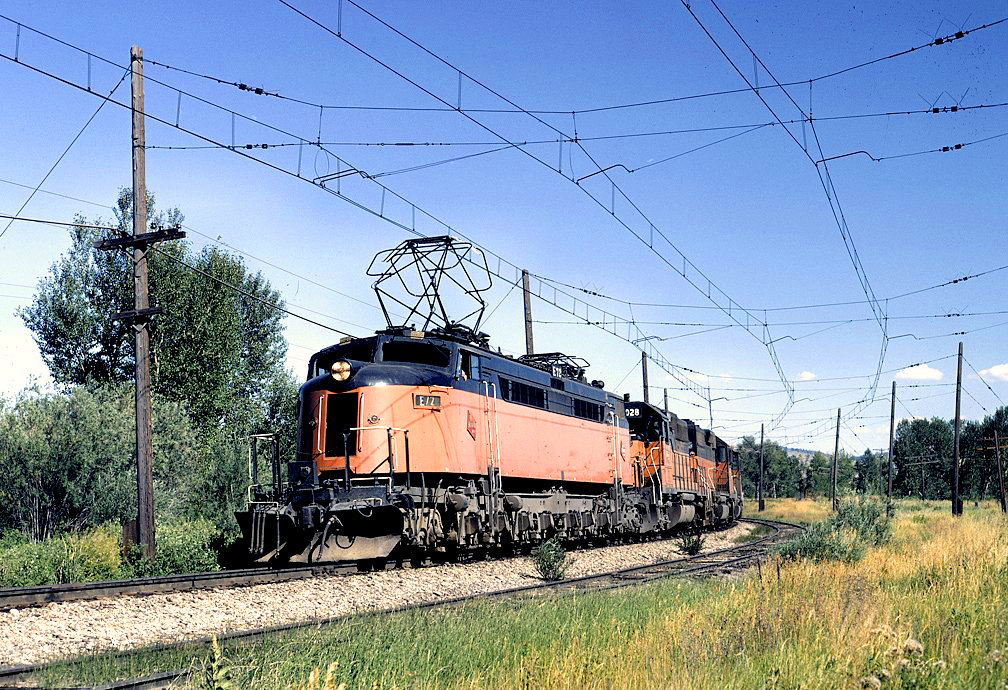 At the time and for many years the electrified western extension was the longest such freight operation in the world at 656 miles and ultimately a number of European countries would emulate the CM&StP's system.

Unfortunately for the railroad the western extension, including its electrification had come at an extremely heavy price of $257 million, more than four times the readjusted amount of $60 million in 1905. At the time freight volume had not been what the railroad expected and ultimately it was forced into bankruptcy in 1925.

A year later it was sold and reorganized, and in 1927 renamed the Chicago, Milwaukee, St. Paul and Pacific Railroad as well as officially adopting its nickname as the Milwaukee Road. 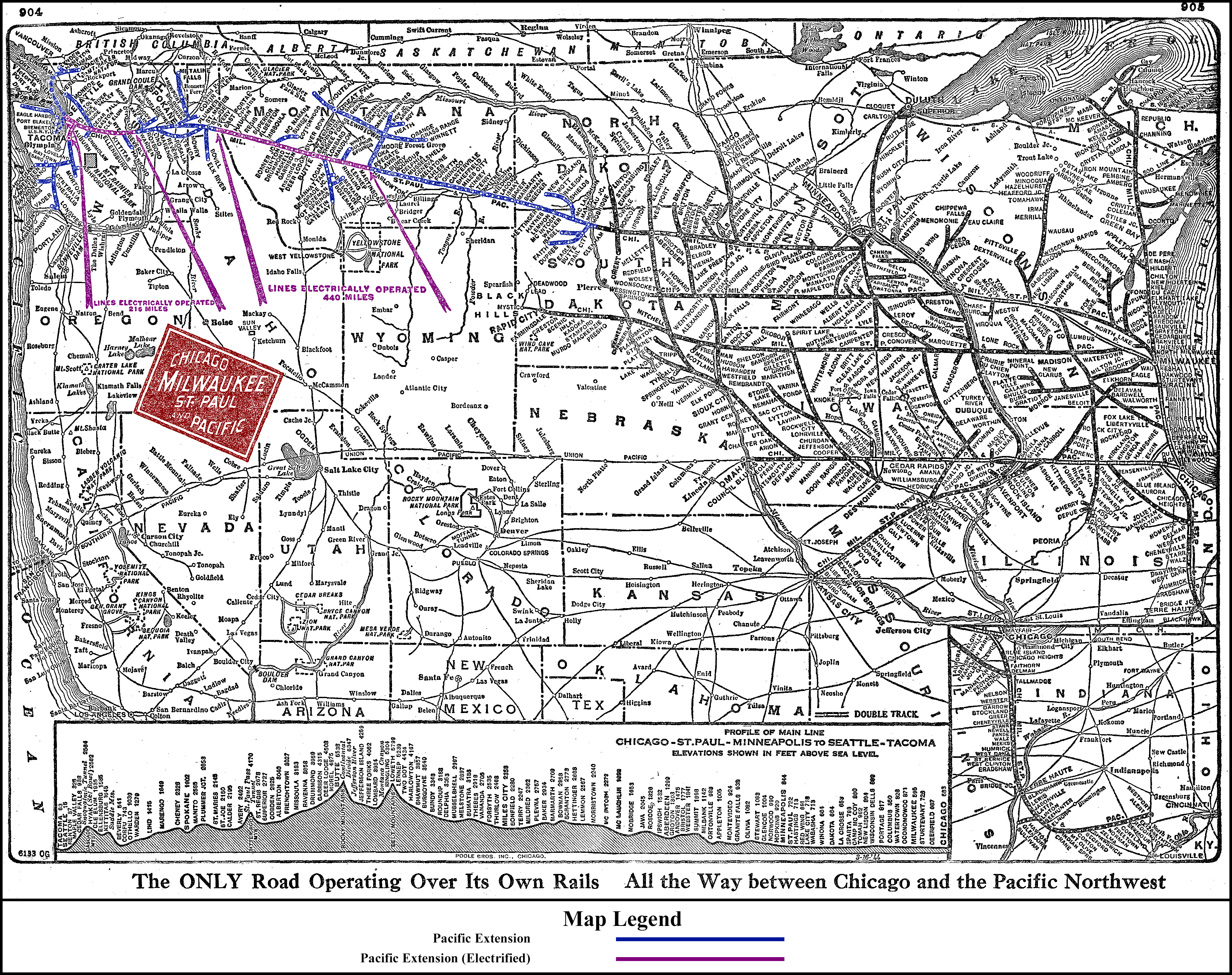 That year also saw the railroad open its own resort leading into the Yellowstone National Park in Gallatin Gateway, Montana called the Gallatin Gateway Inn, which would compete with what the Northern Pacific and Great Northern had to offer.

For power the Milwaukee Road used a number of different electric locomotives on the Extension including General Electric-built boxcabs (Class EP-1 and EF-1), the unique Bi-Polars (Class EP-2), rare Baldwin-Westinghouse Quills (Class EP-3 they were somewhat similar to boxcabs) and finally the last motors ever purchased the highly powerful (and popular) "Little Joes" (Class EP-4 and EF-4).

The Little Joes were purchased in the early 1950s to replace the Milwaukee Road’s aging fleet of electrics which consisted of elderly GE boxcabs; classes EP-1, EF-1, and EP-2 (Bi-Polars). 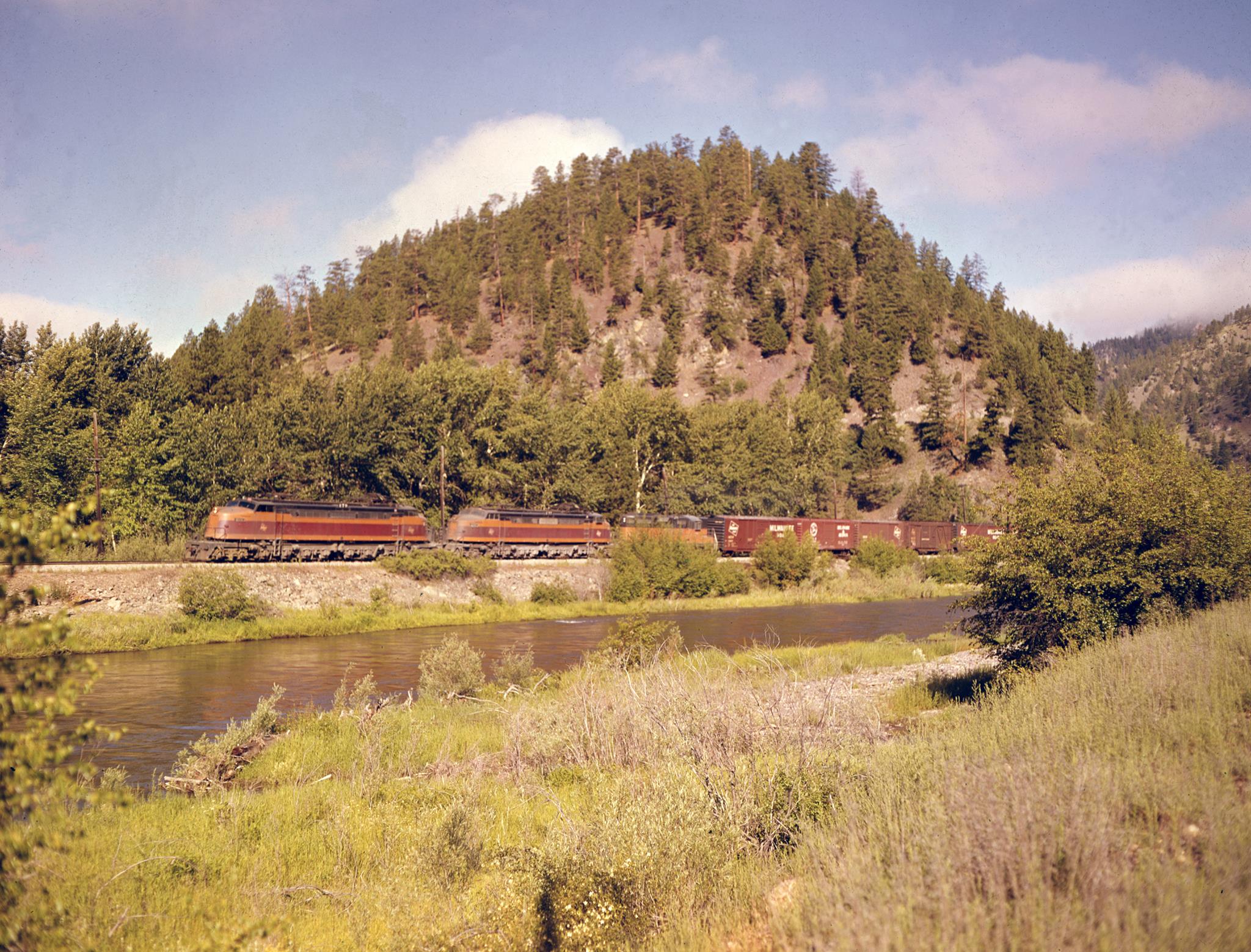 A pair of Milwaukee Road "Little Joes" and a GP9 lead time freight #264 along the Clark Fork River near Bearmouth, Montana on June 17, 1963. Ron Nixon photo.

The Bi-Polars enjoyed relatively long lives and were scrapped in 1962 while the original EP-1s and EF-1s were retired following the purchase of the EF-4s in 1950 (however, boxcab classes EF-2, EF-3, and EF-5 remained in service along with the Little Joes until the end).

While the Extension became an efficient and reliable main line, even after the CMStP&P's reorganization in the mid-1920s the route still failed to live up to expectations, particularly with the oncoming of the Great Depression in 1929. Even the surge of traffic during World War II was not enough for the railroad to stave off a second bankruptcy in 1945.

Interestingly, the best years of Lines West lay ahead. In 1947 the Milwaukee Road canceled the premier Olympian and inaugurated the posh Olympian Hiawatha between Chicago and Seattle. 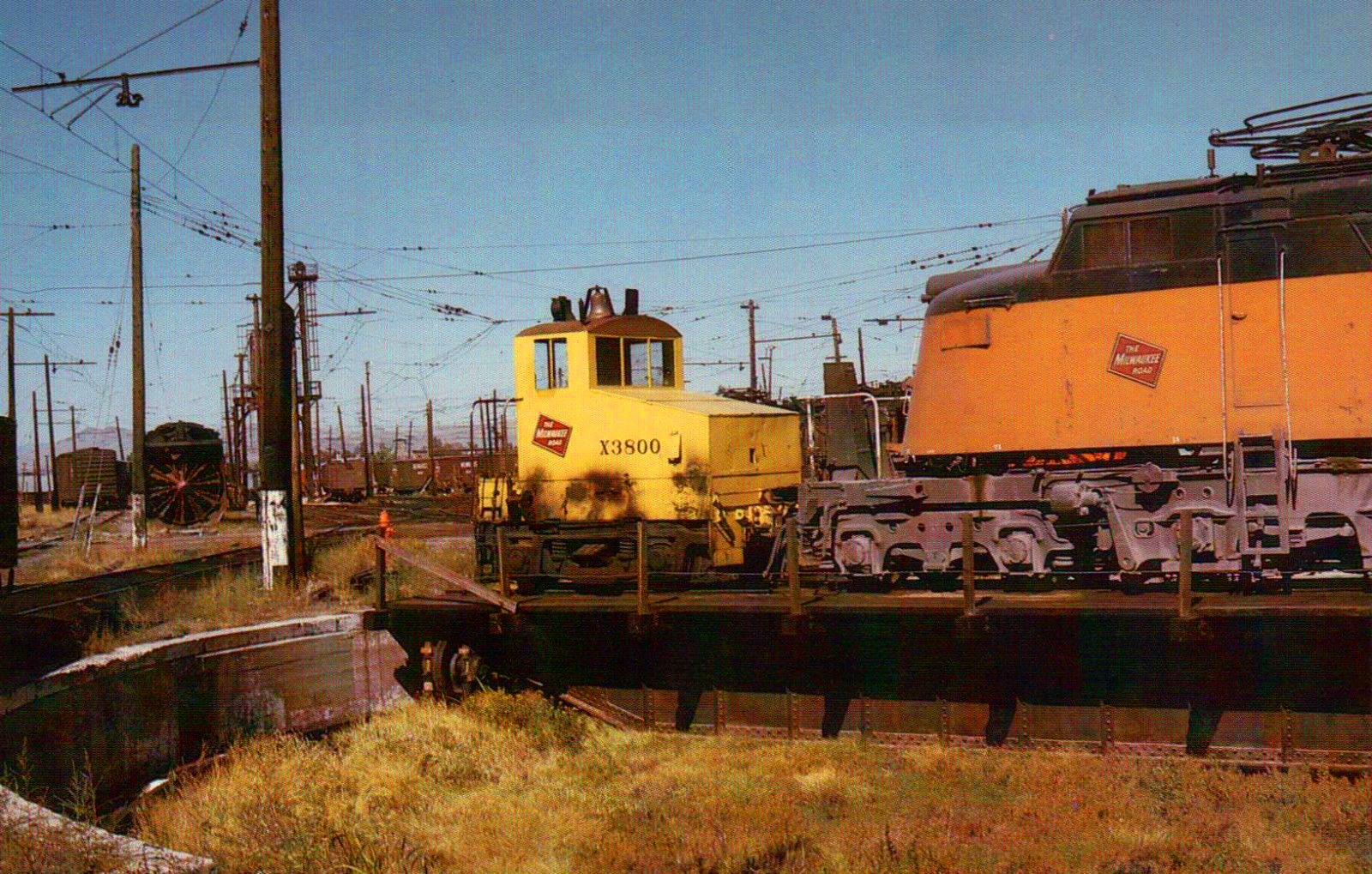 One of the Milwaukee Road's little shop switchers, X3800, pulls a "Little Joe" out of the roundhouse and onto the turntable at Deer Lodge, Montana in September of 1973.

This train was custom-built by the railroad and featured the highly popular "Super Dome" and "Skytop" observation cars, which were hustled through Montana by matching Little Joe EP-4s and by boxcab EP-1s west of Othello, Washington.  For reasons unknown (although the railroad claimed lack of ridership) the Milwaukee discontinued the Olympian Hiawatha by 1961.

However, in 1958 it began trailer-on-flatcar (TOFC) or piggyback service between Seattle and Chicago, a move that would see the Pacific Coast Extension explode in traffic growth. Five years later in 1963 the railroad introduced its high-priority "XL Special" (westbound #261) and "Thunderhawk" (eastbound #262) scheduled freights. 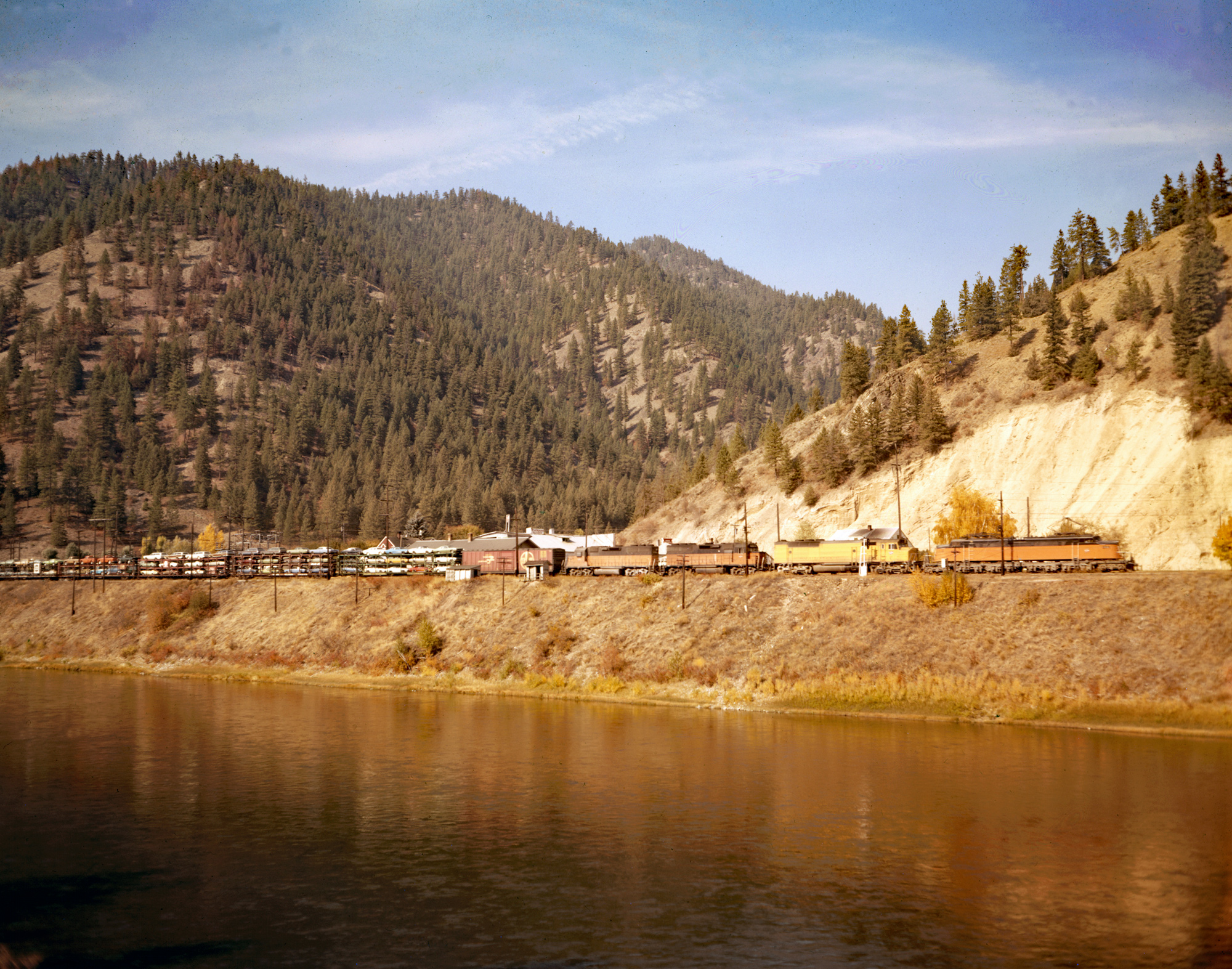 As traffic out of Seattle continued to increase through the 1960s and into the 1970s, so did the Milwaukee Road's share of this freight. The merger of Burlington Northern in 1970 played right into the railroad's hands giving it several new traffic interchange points.

During this time the CMStP&P essentially controlled the Port of Seattle as it commanded nearly 80% of its originating traffic and also held roughly 50% of the total container traffic originating from the Pacific Northwest in general.

In other words, the Milwaukee Road was completely dominating freight volume between Chicago and Seattle (it also didn't hurt that the railroad could shave almost a full day off transit times compared to that of the BN). 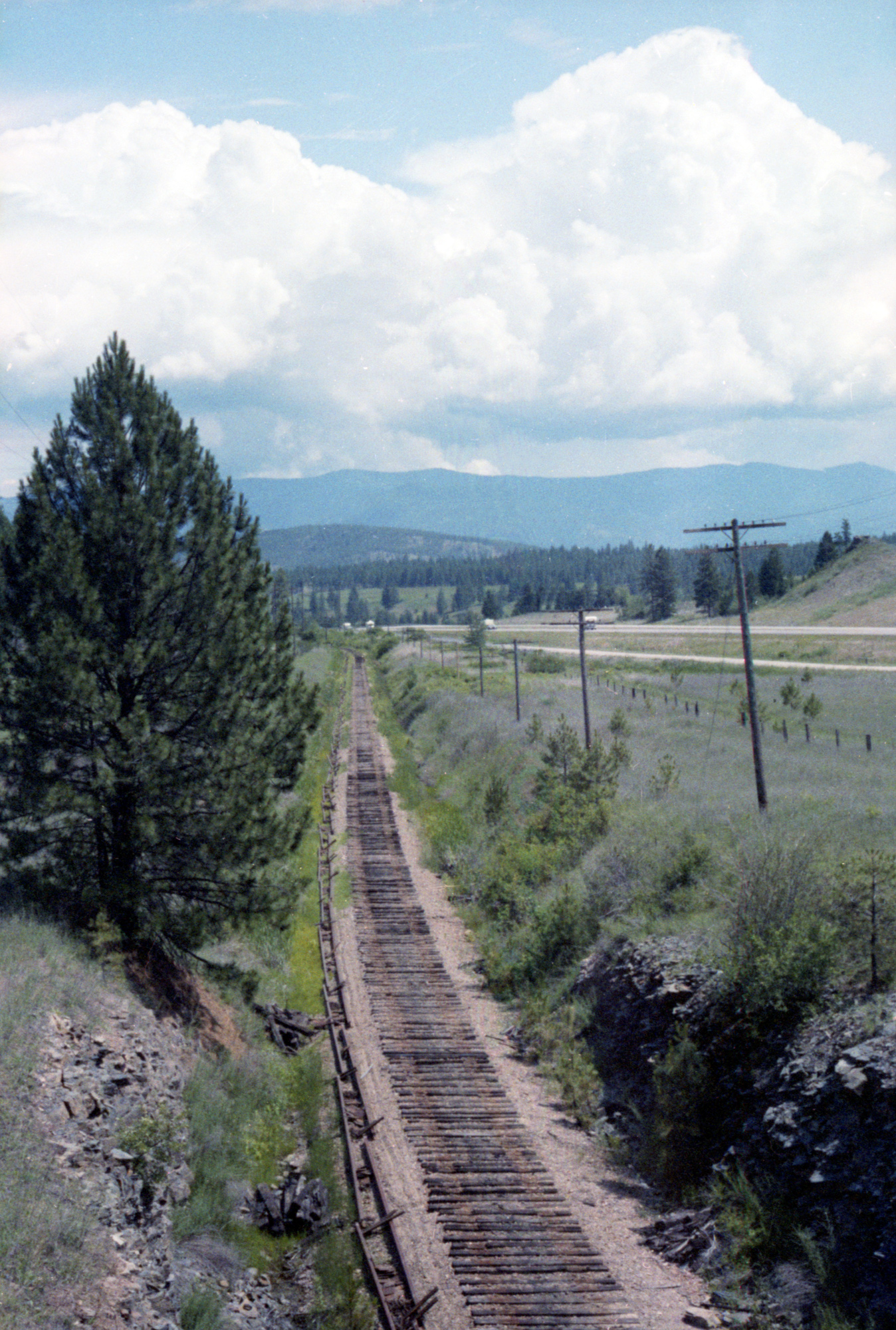 The demise of the Milwaukee Road had already begun, however. Top management at the time had all but given up on wanting to run a railroad. In 1972 it decided to discontinue (but not scrap) electrified operations on the Coast Division between Othello and Seattle.

Then, in 1974 the railroad canceled its electrification completely running its final Little Joes in June of 1974 between Harlowton, Montana and Avery, Idaho. Maintenance of the route was all but halted through the 1970s and 10 mph slow orders were rampant during the line's final years.

By 1977 the very poorly managed Milwaukee Road entered bankruptcy and in an stunning move in 1979 decided to scrap its entire Extension west of Terry, Montana, some 1,100 miles of track. 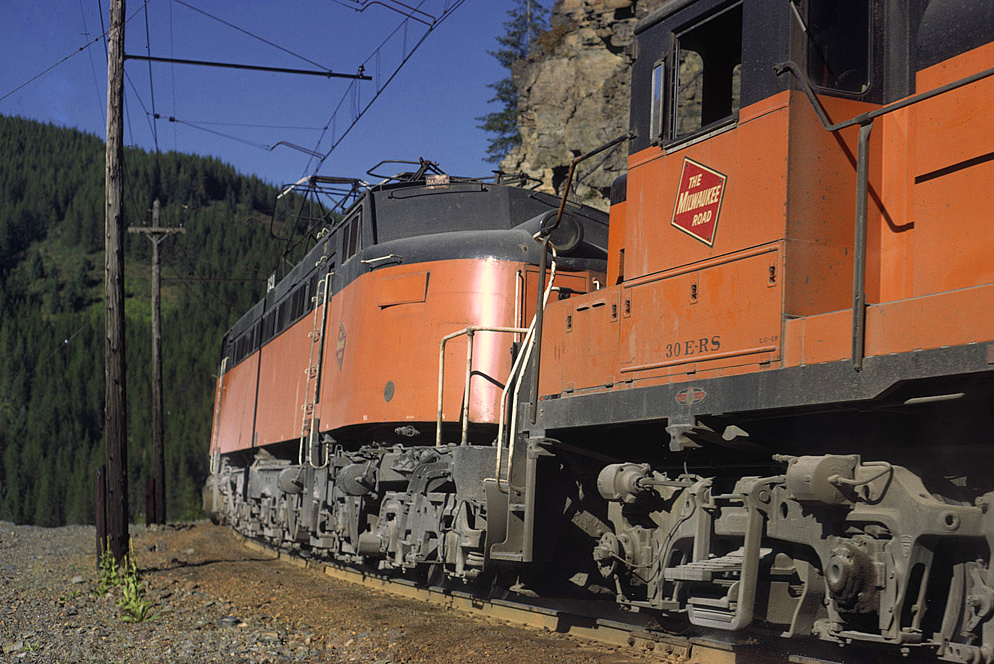 Milwaukee Road Little Joe #E21 and three GP40s grind eastbound out of Avery, Idaho along the St. Joe River with their freight during August of 1971. Drew Jacksich photo.

The trip was well-documented, especially by a group of dedicated railfans which took a series of memorable images of the train slowly trudged its way along the decaying railroad.  Ironically, the best engineered line through the northern Rockies is the only such route to ever be formally abandoned.

Today, much of the original right-of-way through Montana, Idaho, and Washington remains in place although it is now owned by locals save for small stretches in Idaho and virtually all of the line through Washington (which is owned by the state).