While the Southern Pacific would field an entire fleet of streamlined Daylight passenger trains only one, the Shasta Daylight, was a long distance train as the rest were regional runs serving several different California cities.

The popularity of the Daylight was incredibly high, even through the early 1960s although by the latter half of that decade the SP began greatly reducing services and amenities on the fleet as patronage declined.  Additionally, the railroad grew tired of fielding passenger trains altogether at that time.

The Shasta was the Espee's farthest reaching northern train and offered incredible views of the Pacific coastline, northern California, and the Cascades to Portland.

Today, much of the original Shasta route continues to be hosted by Amtrak through its Coast Starlight although the train has been extended much further north to Seattle. 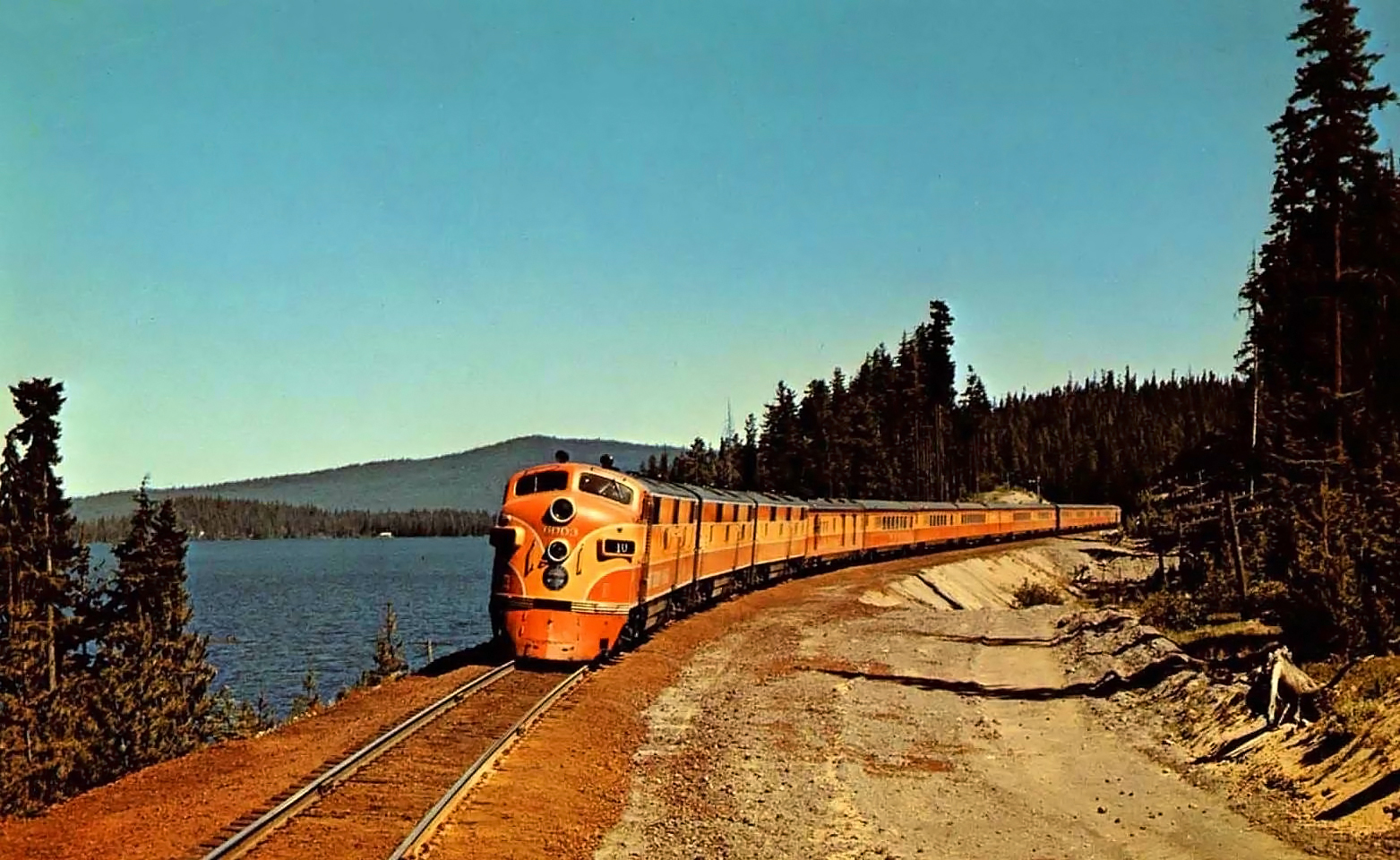 Historically, the Southern Pacific was our country’s single largest classic railroad in terms of route miles, spanning over 15,000 miles and reaching from the stretches of northwest Oregon to southeast Louisiana!

However, to name a few it had three important main lines which continue as important arteries under Union Pacific today, the Overland Route (San Francisco to the Midwest via UP), the Golden State Route (the Southwest to Kansas City in conjunction with the Rock Island), and the Sunset Route (the Pacific Coast to the Gulf Coast).

The Southern Pacific’s famed Daylight has its beginnings dating back to early 1937 when on March 21st it was inaugurated as an all-streamlined passenger train serving Los Angeles and San Francisco.

Up front was a Golden State, 4-8-4 steam locomotive in SP’s GS-2 class in a streamlined look that would become legendary.

The livery, which would also go down in history as one of the all-time classics, chosen for the train was designed by the railroad’s own Charles Eggleston of red, orange, and black.

As it were, the Shasta in many ways was the embodiment of all that the Southern Pacific had to offer in the way of passenger services; unparalleled scenery, top-notch service, and on board amenities that couldn’t be beat. 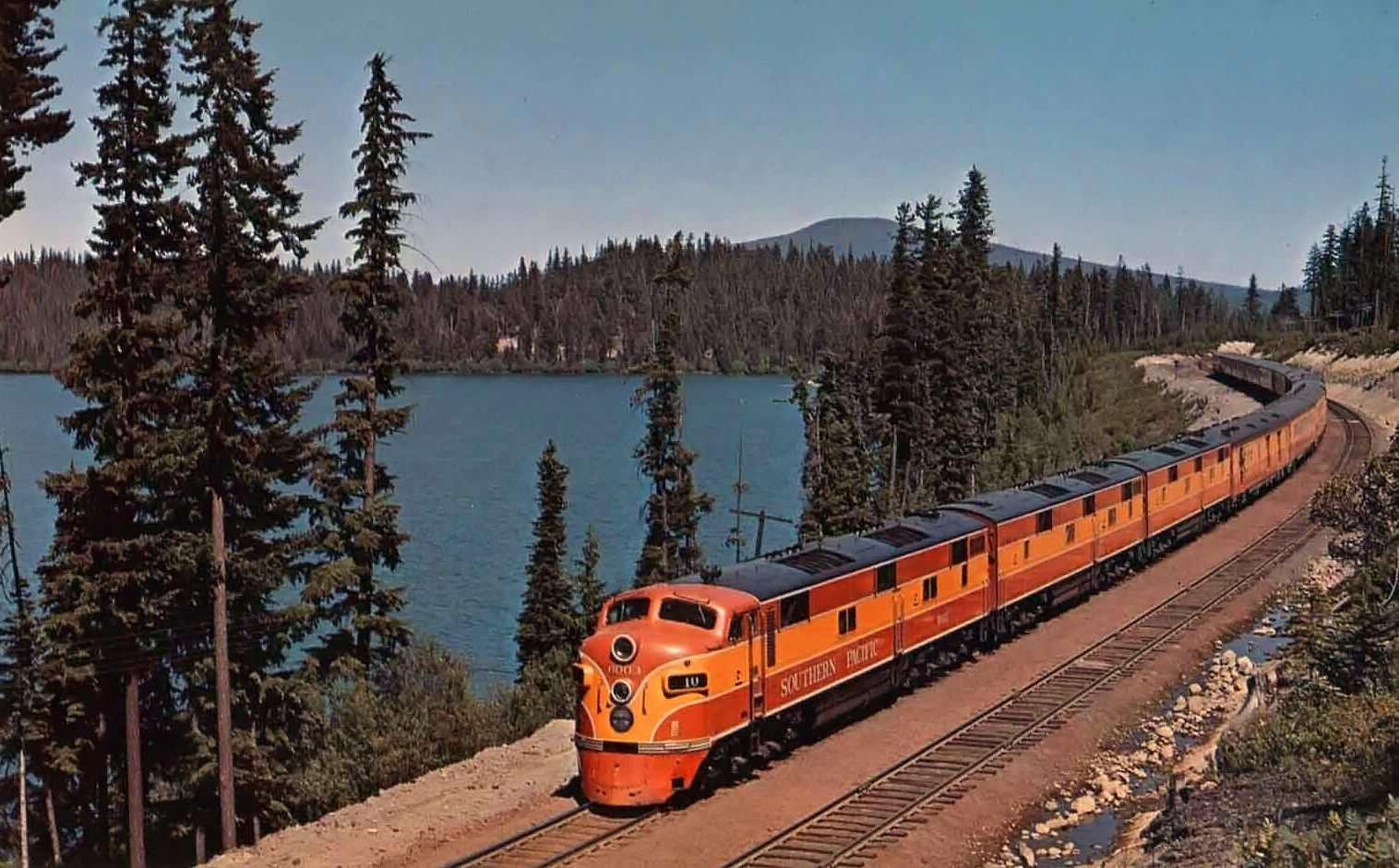 The Shasta hit the rails in the spring of 1949, twelve years after the SP had started its Daylight. In that amount of time the Daylight fleet was a national sensation and the SP soon realized that it had another hit with the Shasta.

The train operated between Oakland/San Francisco and Portland, a distance of a little over 700 miles and just like the regional Daylights the Shasta featured spectacular scenery along its entire route.

Also just like the original Daylights the Shasta was clad in the “Daylight” livery of red, orange, and black and hauled by either EMD E-series or Alco PA diesels (the PA is arguably the most beautiful diesel-electric ever built).

Listed as Trains #9 and #10 on the Southern Pacific's official timetable the Shasta Daylight departed Portland, Oregon at 7:45 am heading south towards California.

Along the way the train passed through beautiful northern California and then through the Cascades along the way passing locations like Mount Hood, Odell Lake, Crater Lake, and other spectacular features of the Pacific Northwest. 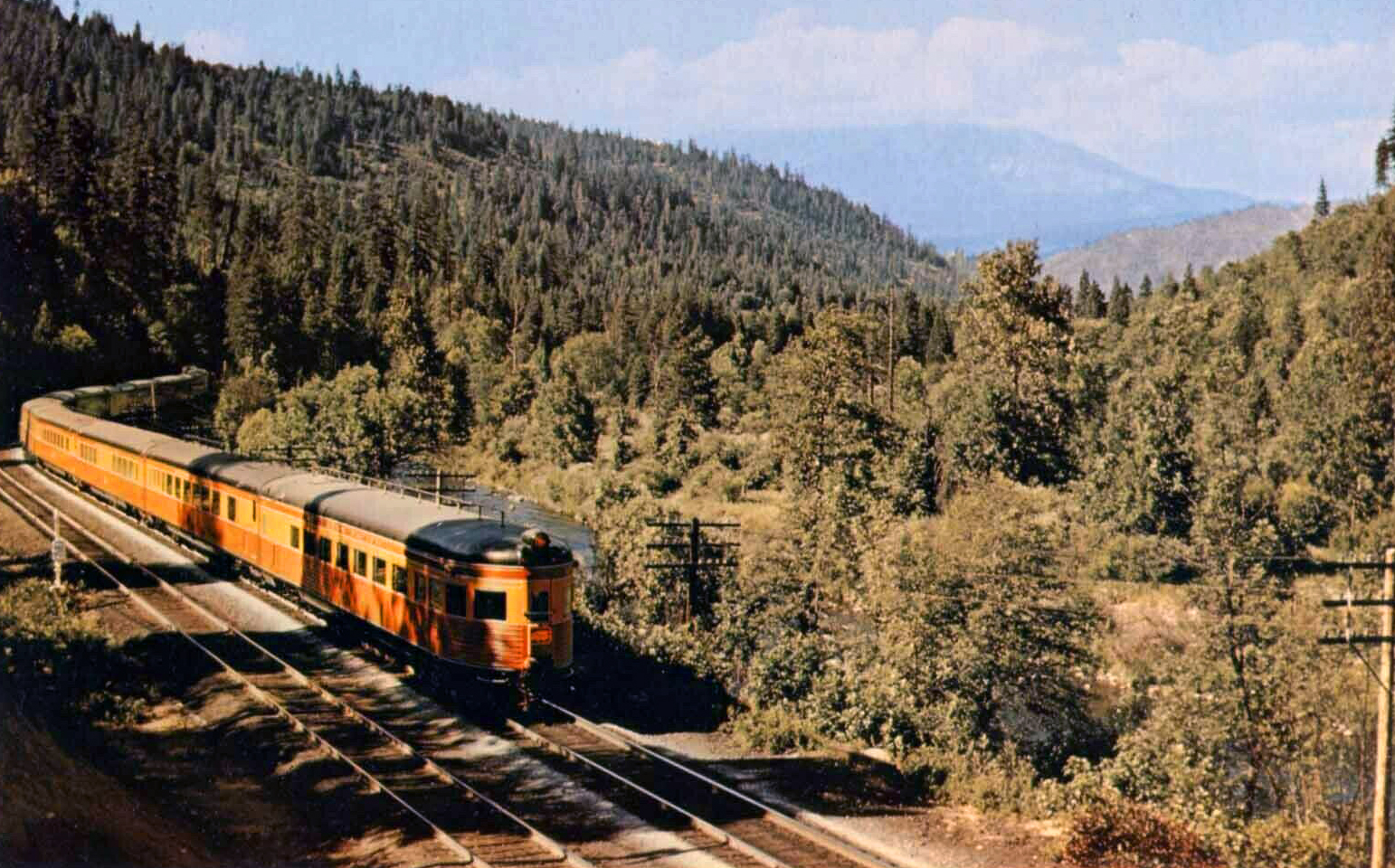 In this Southern Pacific publicity photo parlor-observation #2955 (originally built for the "Coast Daylight" by Pullman-Standard in 1941 and rebuilt in 1949 for the "Shasta Daylight") brings up the tail-end of the "Shasta Daylight" near Dunsmuir, California along the Sacramento River in the summer of 1949. The car was again rebuilt in July, 1963 as a coach-observation and given #2297.

What the made the trip even that much more memorable was the extra large windows built into the Pullman-Standard cars for maximum sightseeing and outdoor viewing. Overall the train could average about 46 mph during its trip and complete the journey in under 16 hours. 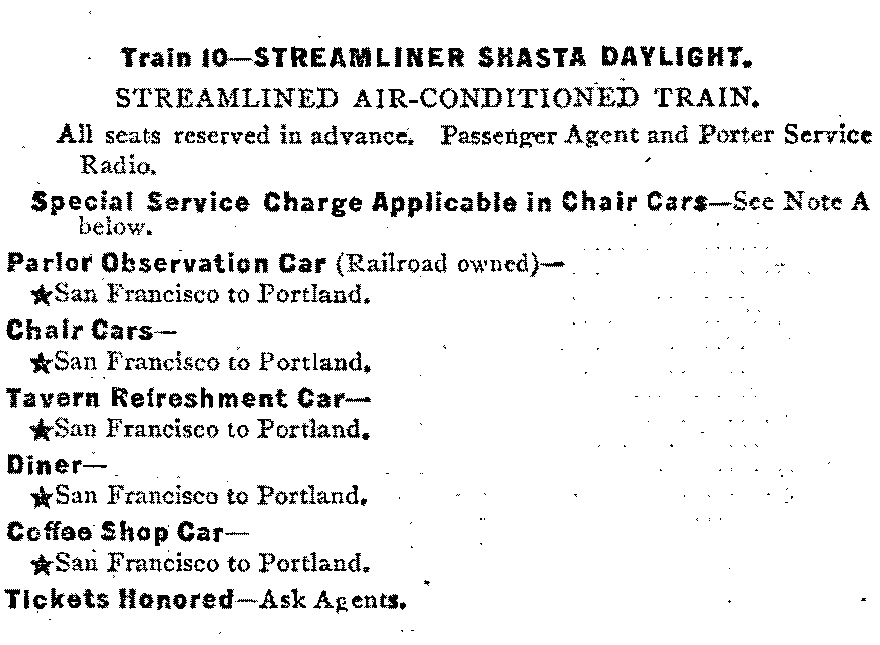 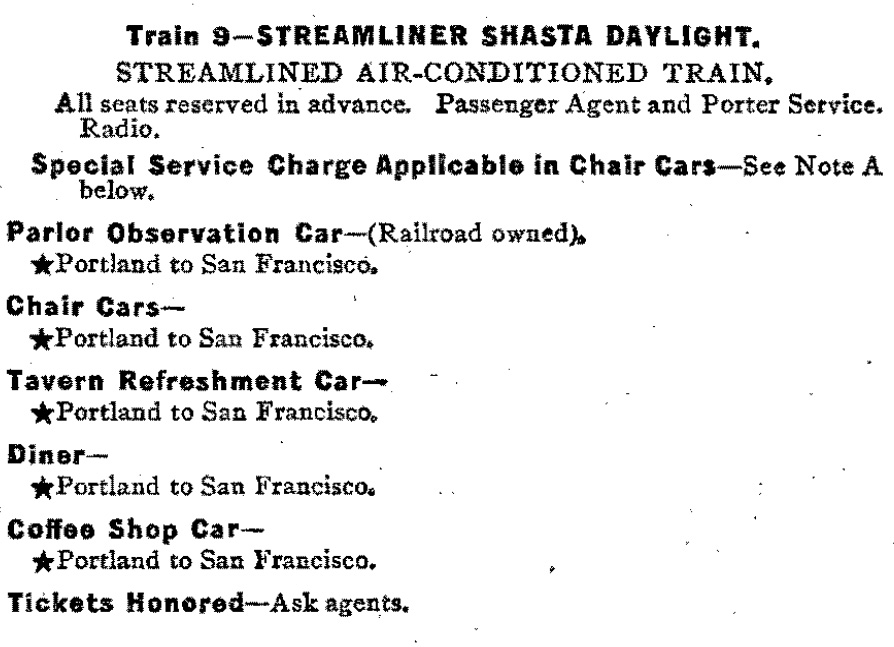 Inside the train was no less spectacular. Featuring diners, lounges, and parlor-observations that were stylized for the local regions the train served, a trait that most certainly increased the train’s popularity. 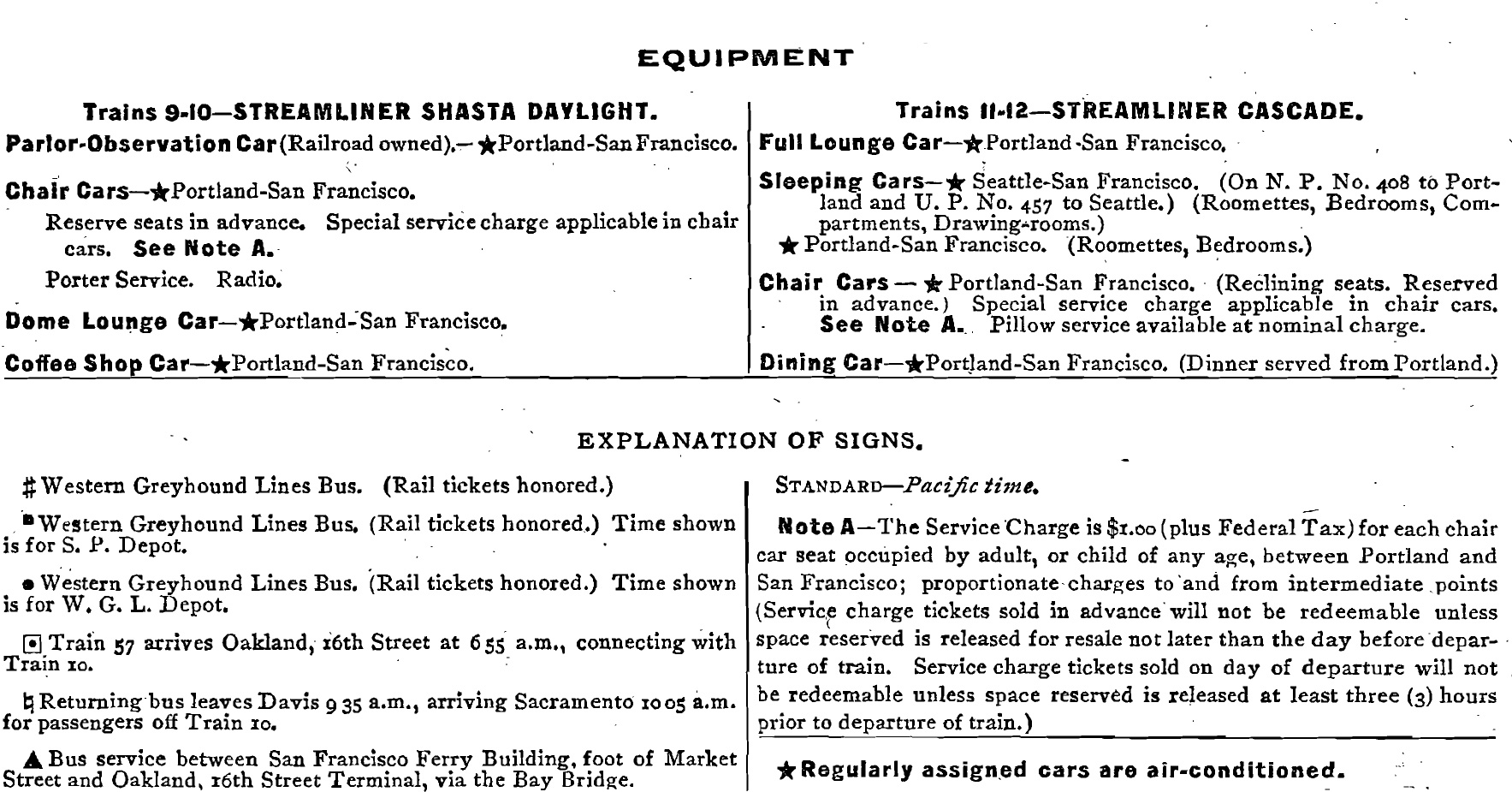 A 1958 consist of the "Shasta Daylight." Author's collection.

However, the Shasta's most striking feature was an articulated, two or three-car diner-tavern-lounge that offered open, unimpeded space between all three cars due to a new design feature from Pullman-Standard which removed the bulkheads between cars and created an open walkway space between them to look as if all three were one.

As with the rest of the Daylight fleet the Shasta was completely air-conditioned, still a rather uncommon accommodation when the train debuted in the late 1940s. 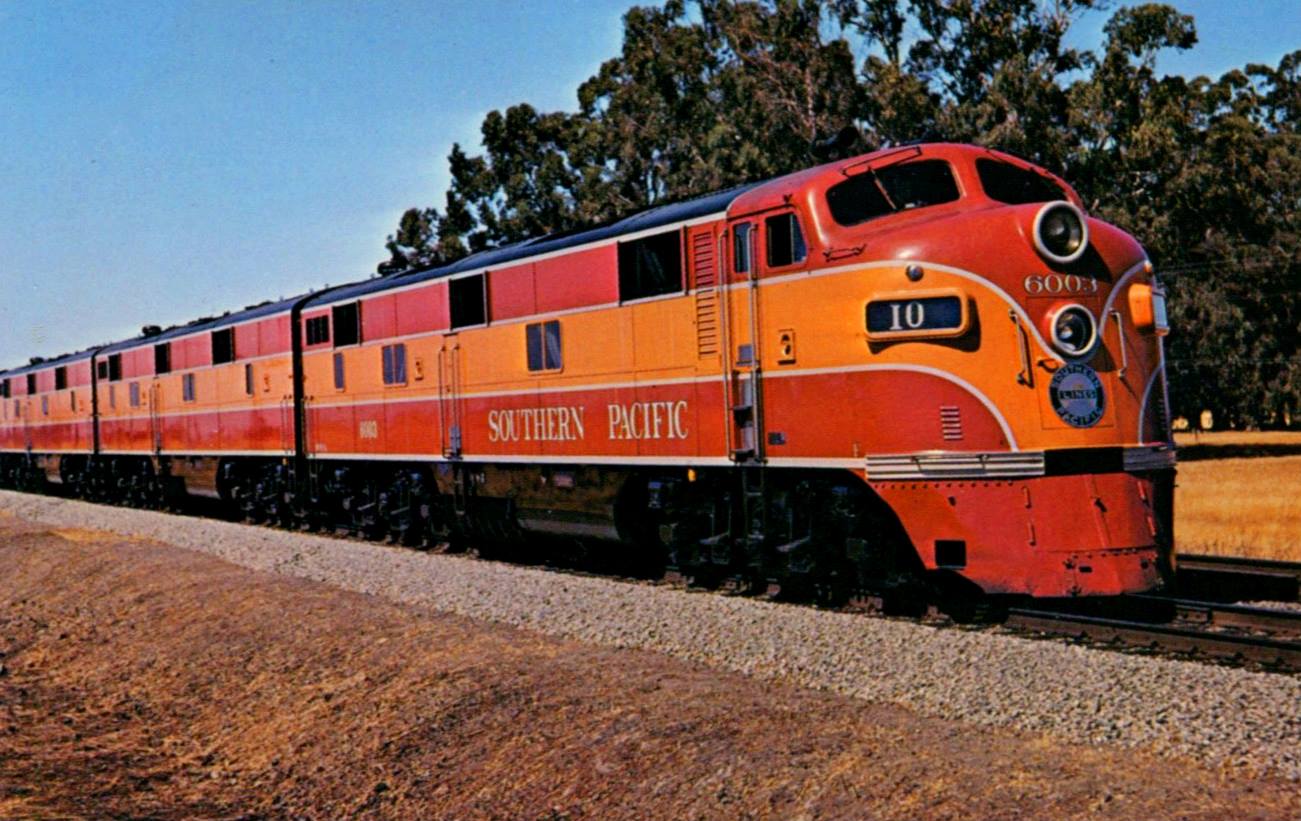 A postcard featuring the debut of Southern Pacific's train #10, the northbound "Shasta Daylight" (San Francisco/Oakland - Portland), led by E7A #6003 in 1949. The SP is well-remembered for using the number-boards to display its train numbers. The "E" units did not last long on the train due to their small traction motors. They were soon replaced with much more rugged PA's, better suited to handle the Shasta Route's grades.

The Daylight fleet remained very successful through the early 1960s but even the Southern Pacific with its vast array of popular and extravagant passenger trains just could not compete with the age of the automobile and super-fast jet airliner.

In addition, SP grew increasingly disinterested in passenger service by the 1960s and began eliminating as many trains as possible.  The Shasta Daylight was an early victim and discontinued in 1966.

In fact, most of SP’s Daylight fleet had disappeared by the time of Amtrak in 1971.  Its original, the Coast Daylight, did survive until the national carrier's startup and remained for a short time although was eventually terminated in favor of the Coast Starlight.

This new train now operates over the Southern Pacific’s old tracks between LA and Portland, following virtually the same route as the Shasta Daylight and is today one of Amtrak’s most popular trains.