The City of San Francisco

The City of San Francisco was just one train in the Union Pacific’s premier fleet of passenger trains. The City of S.F. was one of the first in the fleet and became acclaimed for its impeccable service.

Overall, the Union Pacific hosted an entire array of other plush City trains including the City of Portland, City of Denver, City of Salina, City of St. Louis, City of Los Angeles, and City of Las Vegas.

The City of S.F. began in the mid-1930s as a semi-articulated trainset and operated a fast schedule between the port city and Chicago even though it took three different railroads to complete the streamliner's transcontinental journey.

Unfortunately, with the startup of Amtrak none of the City trains were retained.

Today, the City fleet can still be witnessed, in a manner of speaking, as the UP’s official business train is not only decorated in the Cities’ classic livery but also includes the original equipment from them, right down to the two E9As and E9Bs that power it! 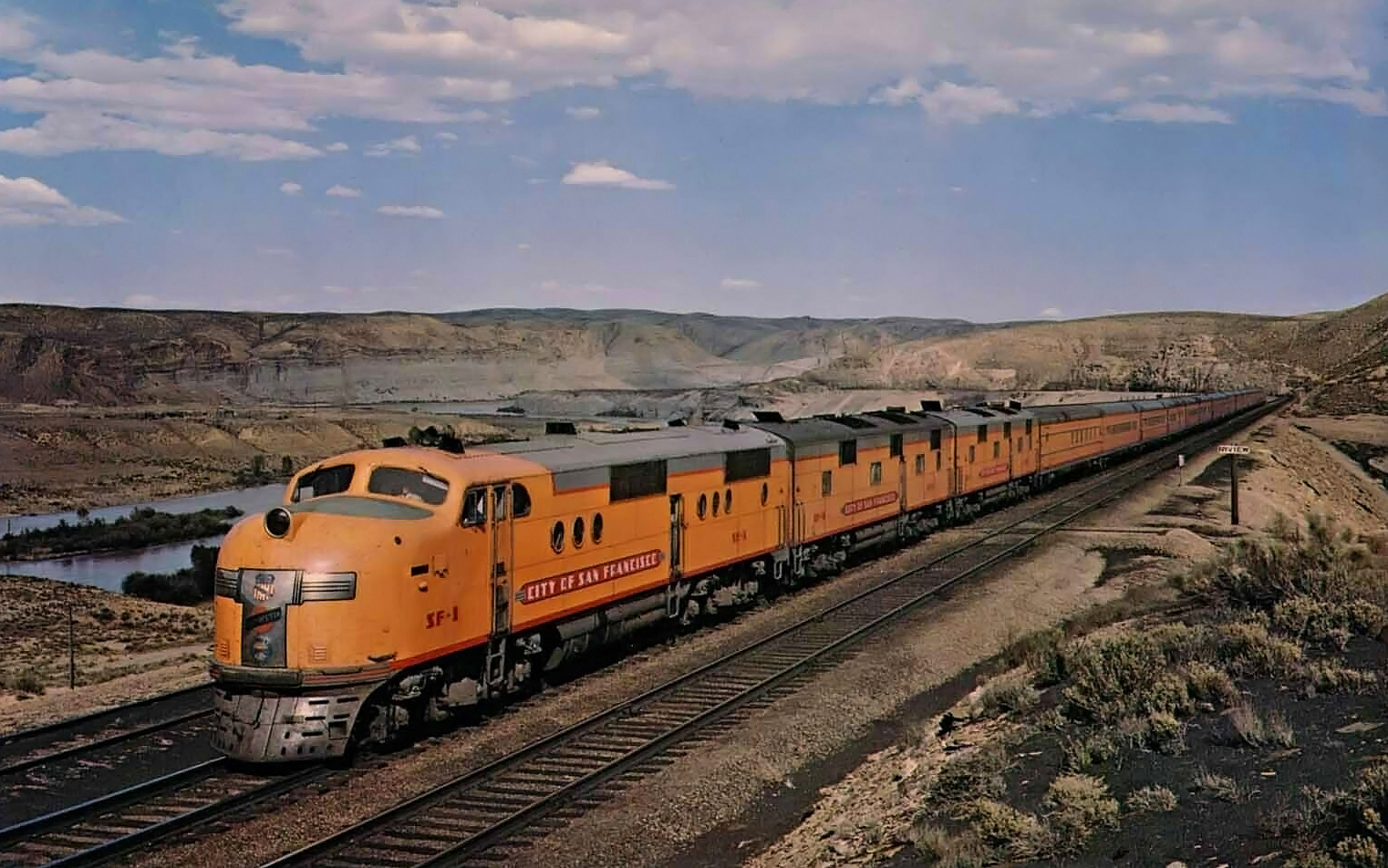 In this Union Pacific publicity photo the rare E2 model leads the westbound "City of San Francisco" which is seen here at Riview, Wyoming at 3:25 PM, circa mid-1940's. The bulbous-nose E2 was a hybrid in Electro-Motive's transition from the slant-nose EA/E1 to the later "Bulldog" look on the E7's, E8's, and E9's. SF-1, in the lead, later became Southern Pacific #6017, nicknamed the "Queen Mary." The SP would go on to rebuild her at the shops in Los Angeles to E7 specifications, equipped with a pair of 567A prime movers, capable of producing a combined 2,000 horsepower.

The City of San Francisco was actually quite similar to its sister, the City of Los Angeles, operating almost virtually identical routes save for the two’s different terminating cities in California.

For the first twenty years or so of the train’s existence it was operated in conjunction with the Chicago & North Western Railway which ferried the San Francisco from Omaha, eastward to Chicago.

This setup lasted until 1955 when the UP, dissatisfied with the services C&NW was providing handed the train over to rival Milwaukee Road, a partnership that would last until the train’s end. Similarly, west of Ogden, Utah the Southern Pacific handled the City of S.F. to its final destination.

In total, the train was operated by three different railroads to stretch from the Midwest to West Coast.  The City of San Francisco debuted on June 14, 1936 as a semi-articulated trainset known by the Union Pacific as the M-10004 (the railroad owned a total of seven of these trainsets). 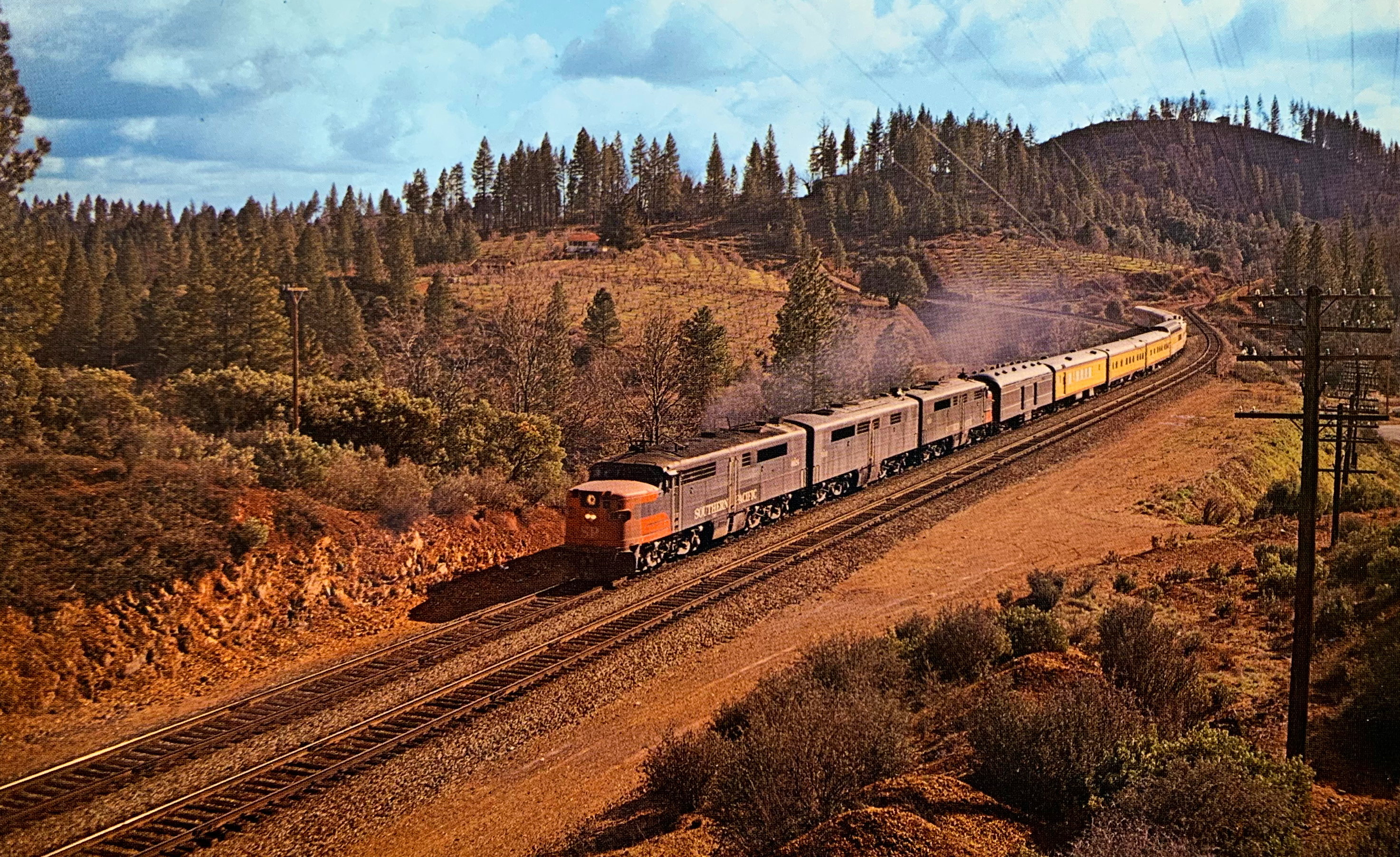 Because the train was one of the very first transcontinental streamliners to hit the rails the traveling public was awestruck. The original nine-car trainset was so successful that just a year later Union Pacific upgraded the train and doing away with the semi-articulated design (the M-10004 was reassigned to another run).

The consist included a single coach, the famed semi-articulated diner/kitchen, club car, and several sleepers/sections/roomettes. It was with this new equipment that Union Pacific began the practice of naming its cars after the city name.

For instance, in the case of the City of San Francisco the consist included names like "Golden State Park", "Portsmouth Square", "Twin Peaks", and "Chinatown".

A 1952 consist of the "City of San Francisco." Author's collection.

A 1958 consist of the "City of San Francisco." Author's collection.

Just before World War II UP further upgraded the train with new streamlined diesel from EMC, E6A #SF-4 and E6Bs #SF-5 and #SF-6 (this latest design featured a much more slanted nose than the earlier, more-bulbous E2).

Following the war the City fleet received even more upgrades, including lightweight equipment and what UP termed “Domeliners,” which were dome cars set up as diners, coaches, and even lounges.

The new equipment, totaling more than 140 new cars, were again adorned in a striking livery of Armour Yellow and light gray with red trim, a paint scheme still in use today on the Union Pacific.

At this time the City of S.F. was also upgraded with new power from EMD including E7s and later E8s and E9s. To keep the equipment and train in matching paint the new equipment used by both the C&NW and Southern Pacific was also clad in Armour Yellow and light gray. This new equipment stretched the train to eighteen cars (including power).

While the City of S.F. could never be termed as the City of Los Angeles since it did not operate with quite such stately services as the latter (for instance, the train never received domes, at least by Union Pacific, although the Southern Pacific did offer dome service on its leg of the San Francisco), the train was a finely run through the end.

After 1960 the train did receive dome service after the railroad combined it with the City of Los Angeles. During the City of San Francisco heyday the train could make the jaunt between Chicago and San Francisco in just over 40 hours although in later years this increased to about 45 hours.

Listed as Trains #103 (westbound) and #104 (eastbound) in Union Pacific's official timetable the City of S.F. would leave Chicago in the late evening and arrive at Omaha very early the next morning.

The Union Pacific would then carry the train as far west as Ogden, arriving there about 8 pm the same day and handing the train off to the Southern Pacific.

The SP would then carry it into San Francisco, arriving there early in the afternoon of the following day. Overall the train carried a respectable train speed of nearly 50 mph and successfully competed with the California Zephyr.

By the late 1960s the UP had combined all of its City trains east of Wyoming and unfortunately, while service remained high through the end with the train neither it nor the rest of the fleet was retained under Amtrak (which has its beginnings dating back to the spring of 1971).