The City of Saint Louis

The City of Saint Louis was just one train in the Union Pacific’s premier fleet of passenger trains. A very late entrant into the railroad's City fleet, the St. Louis was not inaugurated into after World War II.

However, it proved to be a fairly successful train, in no small part to the UP's reputation for impeccable service.

The train eventually operated a routing similar to the City of Los Angeles, although at first it did not reach the Pacific Coast.

The railroad hosted an entire array of plush City trains, all of which were quite successful.  For the St. Louis, it was a short-lived train surviving barely twenty years under its own name.

Today, the City fleet can still be witnessed, in a manner of speaking, as the UP’s official business train is not only decorated in the Cities’ classic livery but also includes some of the original equipment, right down to a set of E9As and E9Bs that power the consist. 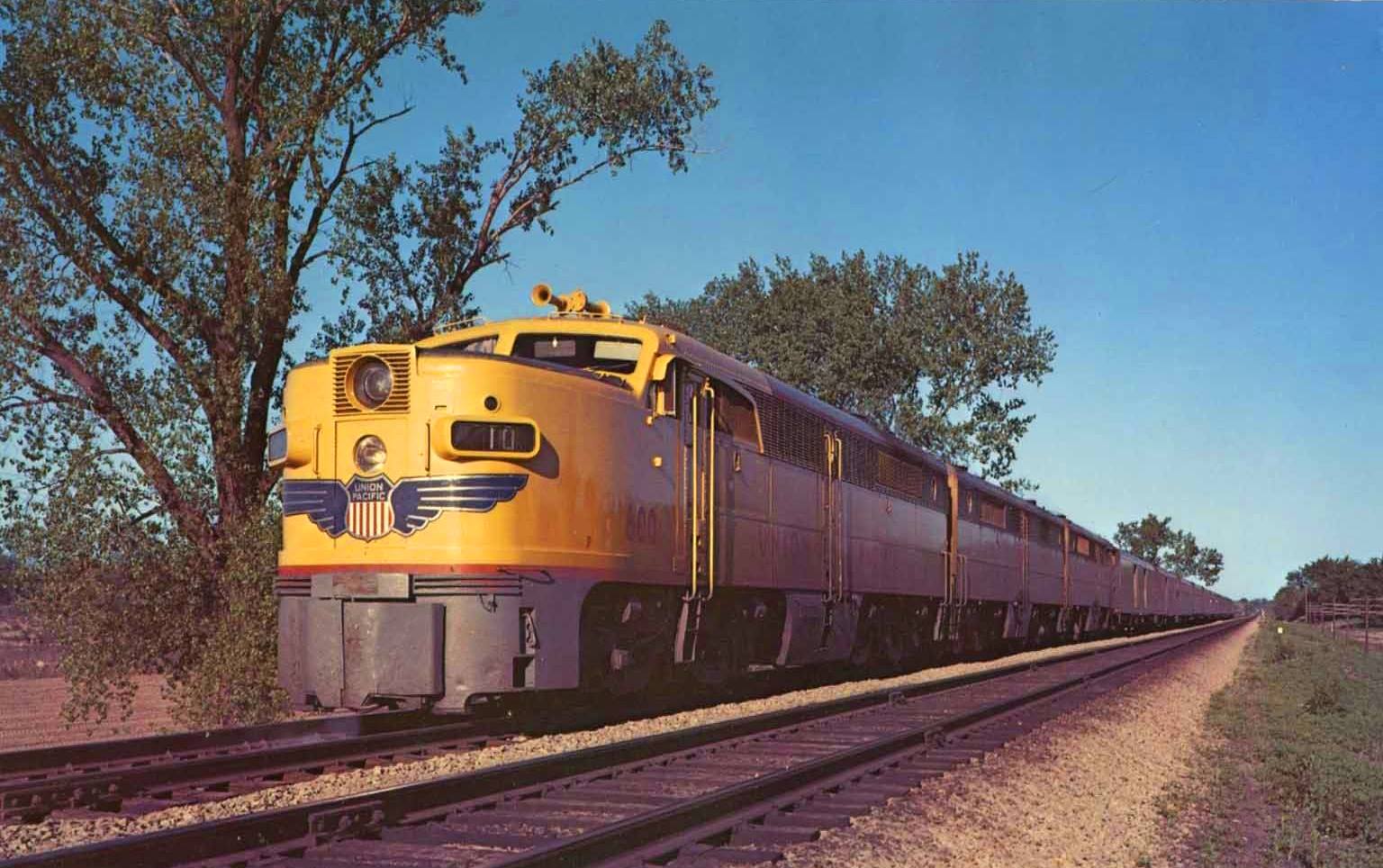 A Union Pacific company photo featuring a PA-PB-PA set ahead of train #10, the eastbound "City of St. Louis" (Los Angeles - St. Louis), near Lawrence, Kansas circa 1956. Note the train is not yet a "Domeliner," missing its dome-lounge-observation.

Union Pacific has a very long and storied history.  The Union Pacific’s City fleet is credited with being the first lightweight streamlined passenger train to operate in the United States. In February of 1934 the City of Salina, the first in the fleet, debuted as a three-car lightweight trainset that the was named the M-10000.

Union Pacific was so impressed with the train, and the response it received from the public, the railroad purchased seven more sets and the City fleet was born!   Following the City of Salina, also in 1934, was the City of Portland,  City of Los Angeles, City of San Francisco, and finally City of Denver in 1936. 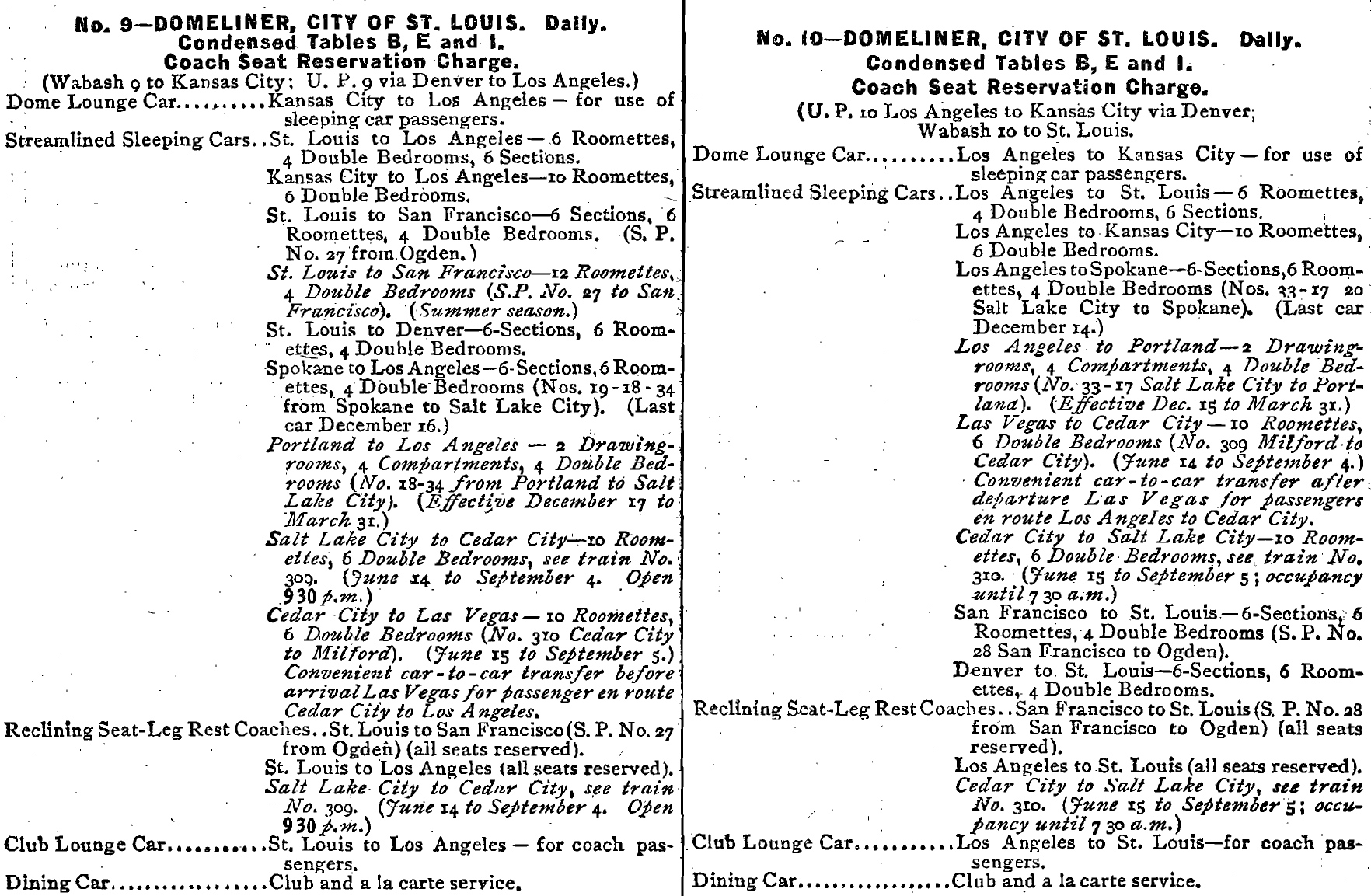 The City fleet became revered throughout the west and rivaled the Santa Fe’s legendary Super Chief, and every other western passenger train, in exquisiteness and fine traveling.

Once the trains received their Domeliners in the mid-1950s they became the lavish way to travel for many of Hollywood's elite.

The City of St. Louis was another of Union Pacific’s vast City fleet of trains connecting the Midwest with the west coast. The train debuted on June 2, 1946 originally connecting its namesake city (in conjunction with the Wabash Railroad between Kansas City-St. Louis) with Cheyenne, Wyoming via Denver. 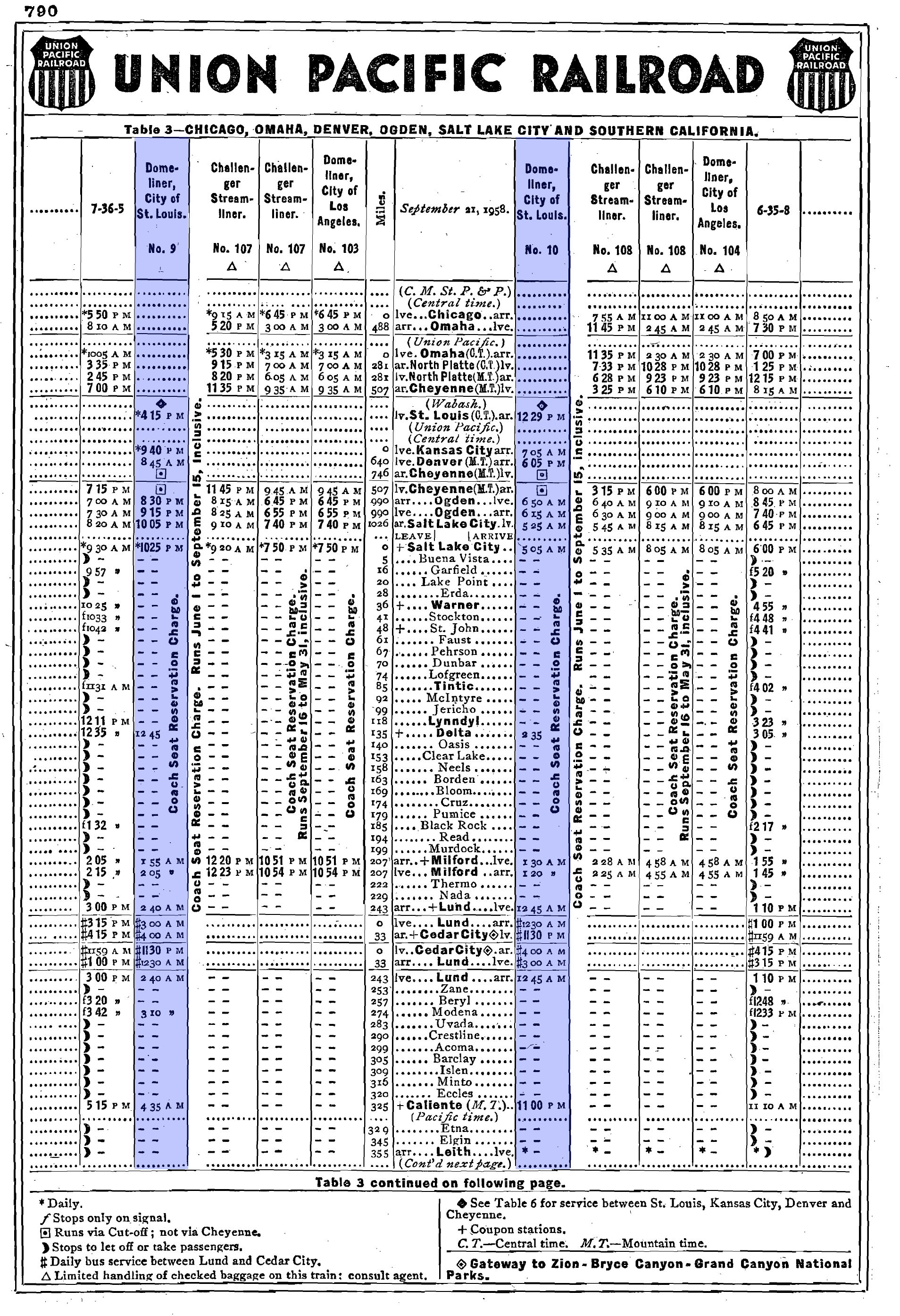 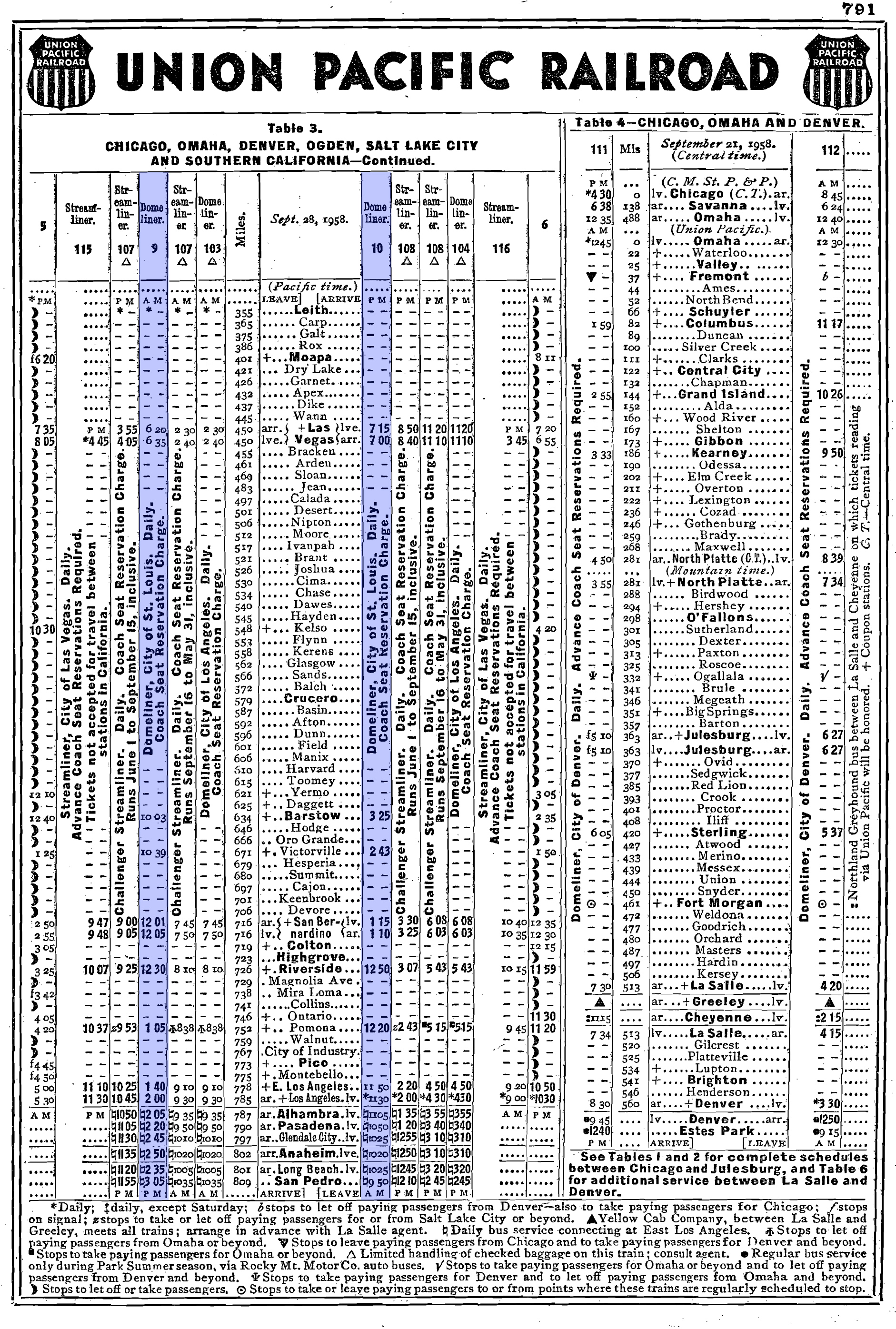 For its first four years of service the train only operated through sleeper service to Portland, San Francisco, and Los Angeles via Cheyenne.   However, later in 1951 it began dedicated service as its own train all of the way to Los Angeles.

Not long after the St. Louis hit the rails it was upgraded with lightweight, all-streamlined equipment in 1947 featuring diners, Pullman sleepers, lounges, observations, and even dome cars which were added in 1958 from Pullman-Standard and American Car & Foundry. 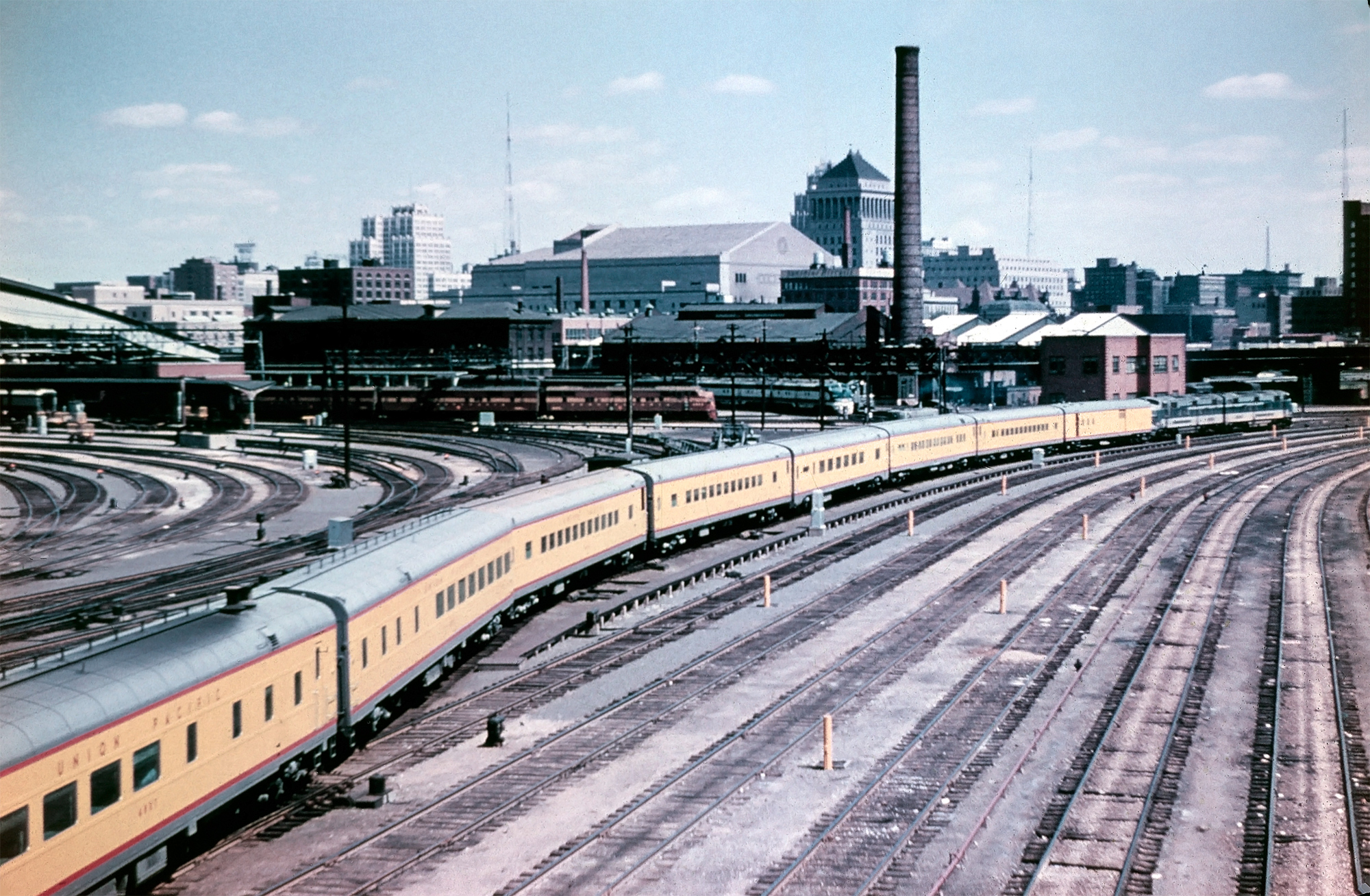 After the Wabash was leased by the Norfolk & Western Railway in 1964 the latter company ferried the City of St. Louis between St. Louis Union Station and Kansas City Union Station.

Operating on a schedule of nearly 47 hours the train listed as #9 (westbound) and #10 (eastbound) on UP's official timetable, normally carried an average train speed of about 50 mph the entire trip.

Through the end the City of St. Louis, along with her sister City trains, remained a top-notch, all matching consist (of Armour yellow and grey) by Union Pacific. 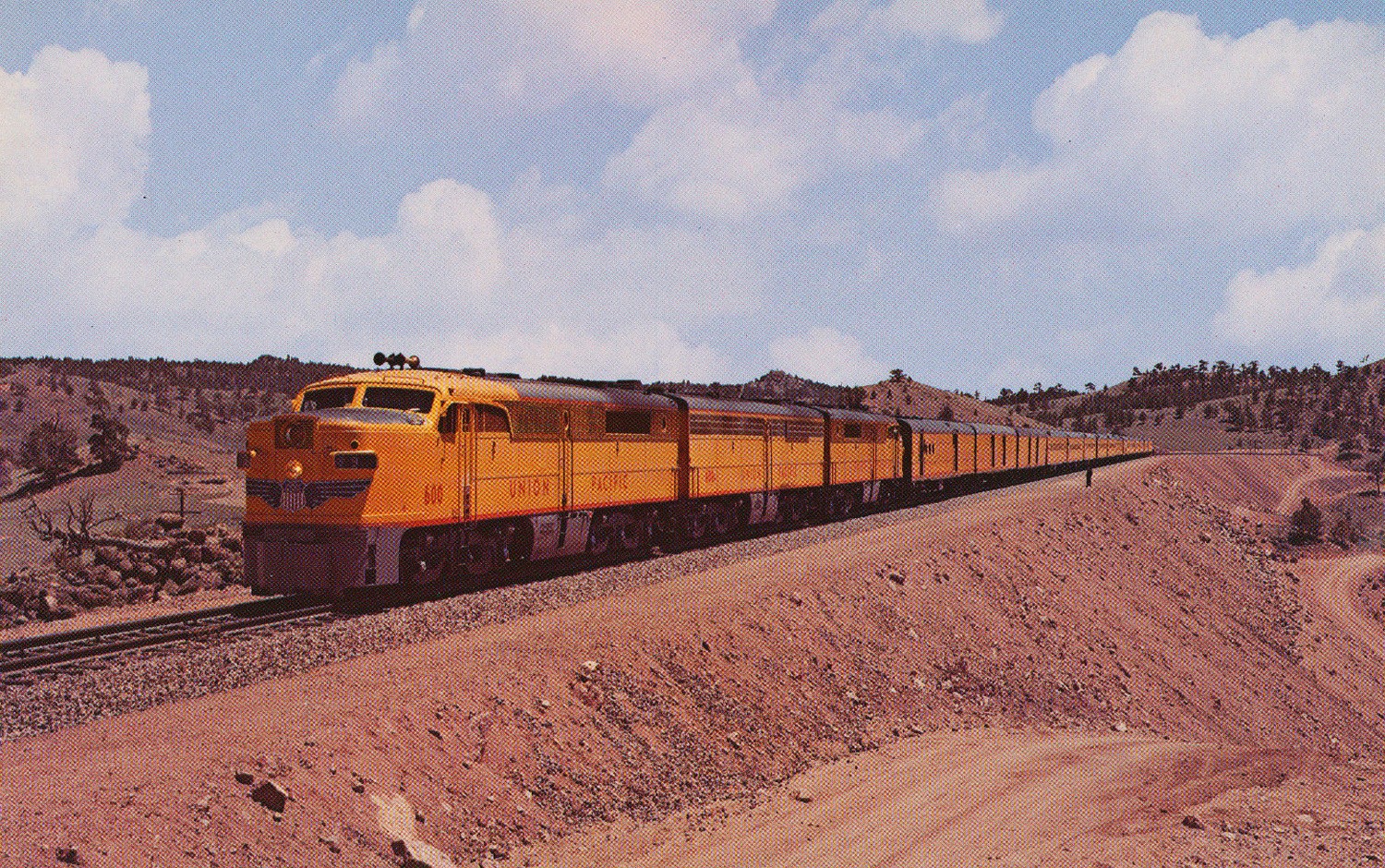 A Union Pacific company photo featuring a PA-PB-PA set with train #9, the westbound "City of St. Louis" (St. Louis - Los Angeles), on the new low-grade alignment along home rails near Cheyenne, Wyoming during the early 1950s.

As rail travel patronage continued to slump through the 1960s the train was eventually downgraded, however, and combined with the City of Los Angeles west of Ogden, Utah.

In 1970 Union Pacific pulled the popular Domeliners from all of its City trains. While service remained satisfactory, however, this did not secure the Kansas City or other trains’ futures, as none were retained when Amtrak began service in the spring of 1971. Today, the fleet can still be witnessed through Union Pacific's official business train.