The City of Portland

The City of Portland was one of the Union Pacific's very first streamliners in its City fleet. The railroad hosted an entire array of other plush City trains including the City of Angeles, City of Denver, City of Salina (the original M-10000), City of St. Louis, City of San Francisco).

The Portland became a highly successful streamliner following its debut as an semi-articulated trainset and convinced the UP that offering numerous on board amenities along with a sleek-looking train was the future of passenger rail travel.

Today, the City fleet can still be witnessed, in a manner of speaking, as the UP’s official business train is not only decorated in the Cities’ classic livery but also includes the original equipment from them, right down to the two E9A and E9B diesel locomotives that power it!

Union Pacific, the largest and most powerful railroad in the country, has been with us since 1862. Its creation is thanks to President Abraham Lincoln and Congress's efforts to build a transcontinental railroad.

The company is far older than any other American Class I railroad today with the Kansas City Southern in a nearby second. 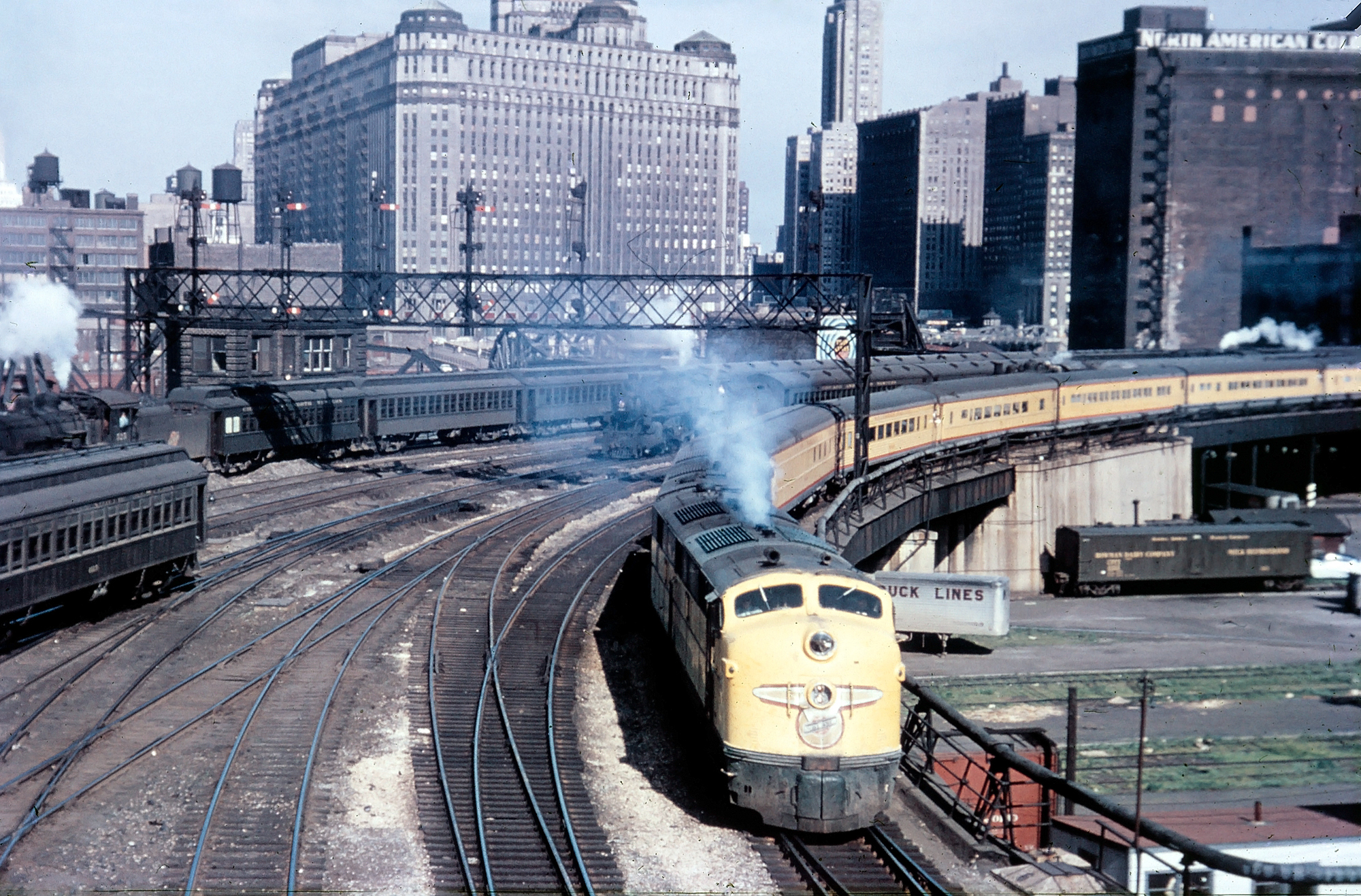 A pair of Chicago & North Western E7A's depart Northwestern Terminal in Chicago during rush hour with the westbound "City of Portland" on a summer's afternoon in 1953. A.C. Kalmbach photo. American-Rails.com collection.

Initially launched on May 5, 1935, the City of Portland was Union Pacific’s gateway to the Pacific Northwest, although, because it operated a more southerly routing than famed Northwestern passenger trains like the Great Northern’s Empire Builder or Northern Pacific’s North Coast Limited the train is sometimes forgotten about or overlooked.

Like the City of Los Angeles, for the first twenty years or so of the train’s existence it was operated in conjunction with the Chicago & North Western Railway which ferried the Portland from Omaha, eastward to Chicago.

This setup lasted until 1955 when the UP, dissatisfied with the services C&NW was providing handed the train over to rival Milwaukee Road, a partnership that would last until the train’s end.

While the Empire Builder and North Coast Limited may go down in history as the most famous Northwestern passenger trains, the Portland carries several historical distinctions: 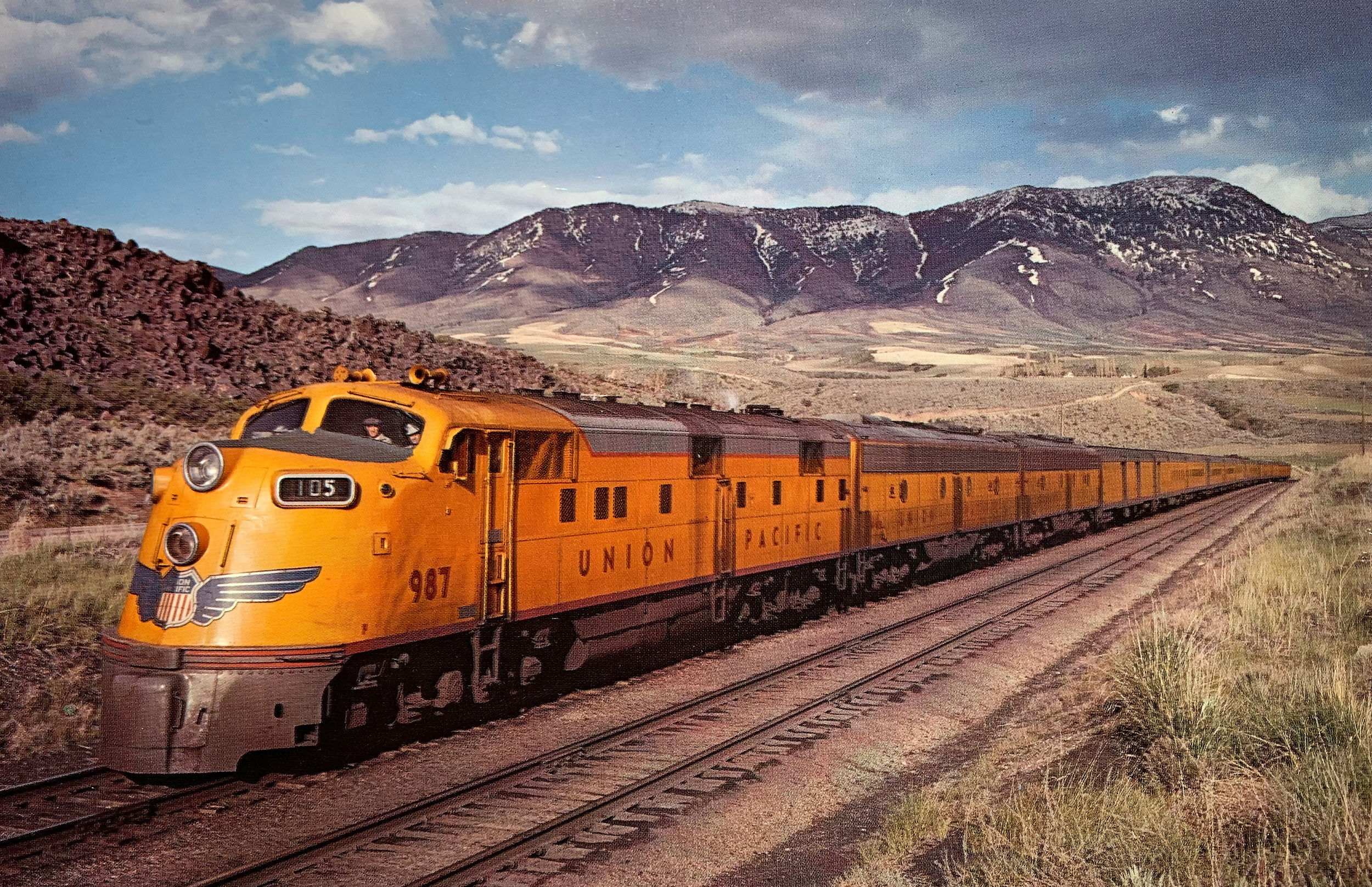 A Union Pacific publicity photo featuring train #105, the westbound "City of Portland," posed along the main line between McCammon and Pocatello, Idaho during the summer of 1953. Author's collection.

Along with the City of Los Angeles, the Portland was Union Pacific’s premier passenger operation and the railroad spared no expense on the train.

While the City of Portland's routing offered a bit less scenery over the prairies and foothills of the famed Overland Route between Omaha, Nebraska and Granger, Wyoming the train featured accommodations as fine as anything one could find nationwide. 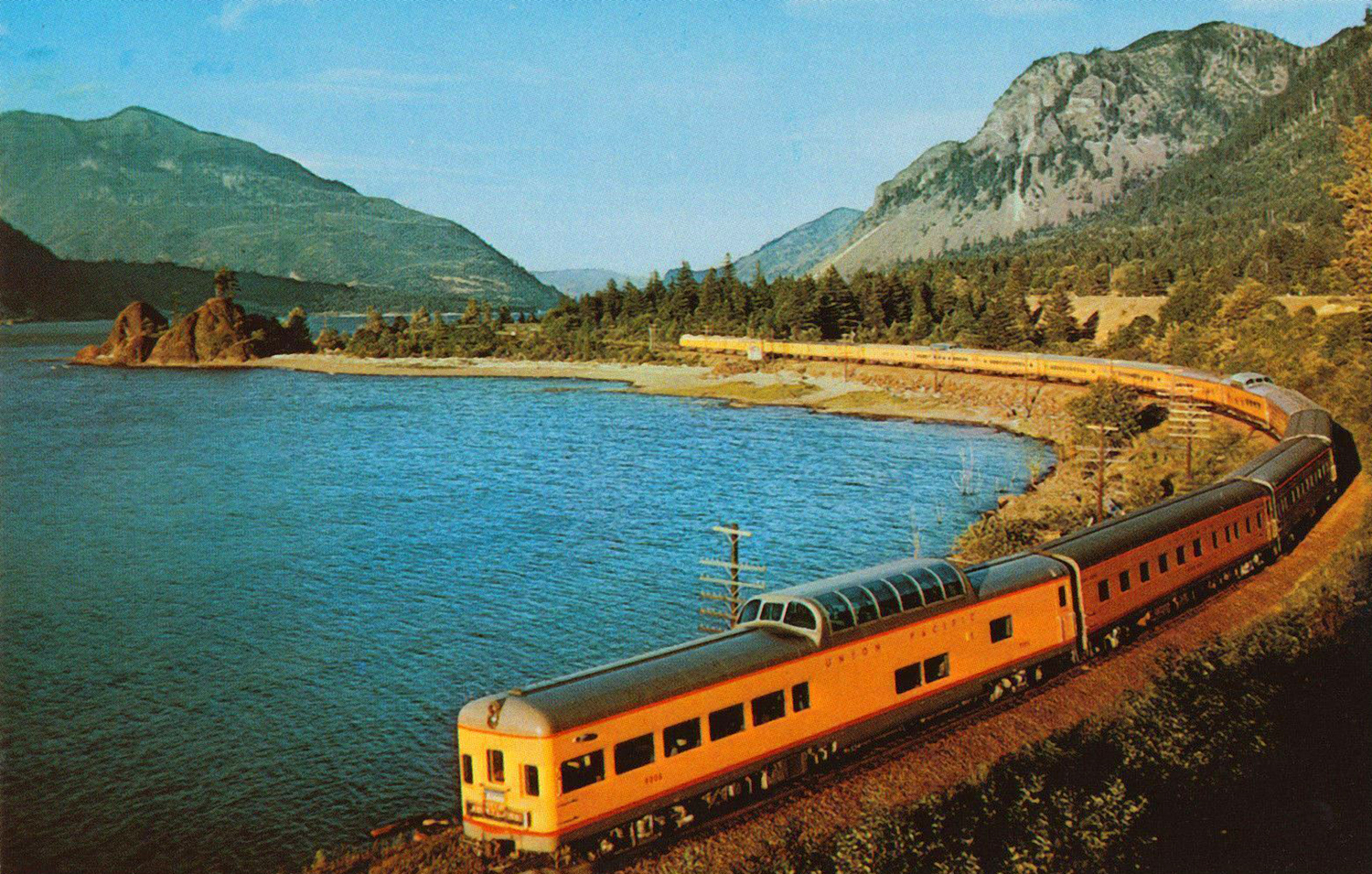 The famous publicity photo of the "City of Portland" features the train skirting the Columbia River Gorge east of Portland. The scene dates to no earlier than 1954-1955 when Union Pacific acquired its 35 lightweight, streamlined cars from American Car & Foundry. Bringing up the train's tail end is Astra-Dome, blunt-end observation lounge #9006. There were five built for the train.

With the railroad receiving upgraded equipment from both Pullman-Standard, American Car & Foundry, and EMD following World War II, the Portland the train was completely reequipped with new lightweight, streamlined equipment and in the 1950s received Domeliners.

The new equipment, as the original streamliners that had debuted in the mid-1930s, was also adorned in a striking livery of Armour yellow and light gray with red trim, a paint scheme still in use today on the Union Pacific.

A 1952 consist of the "City of Portland." Author's collection. 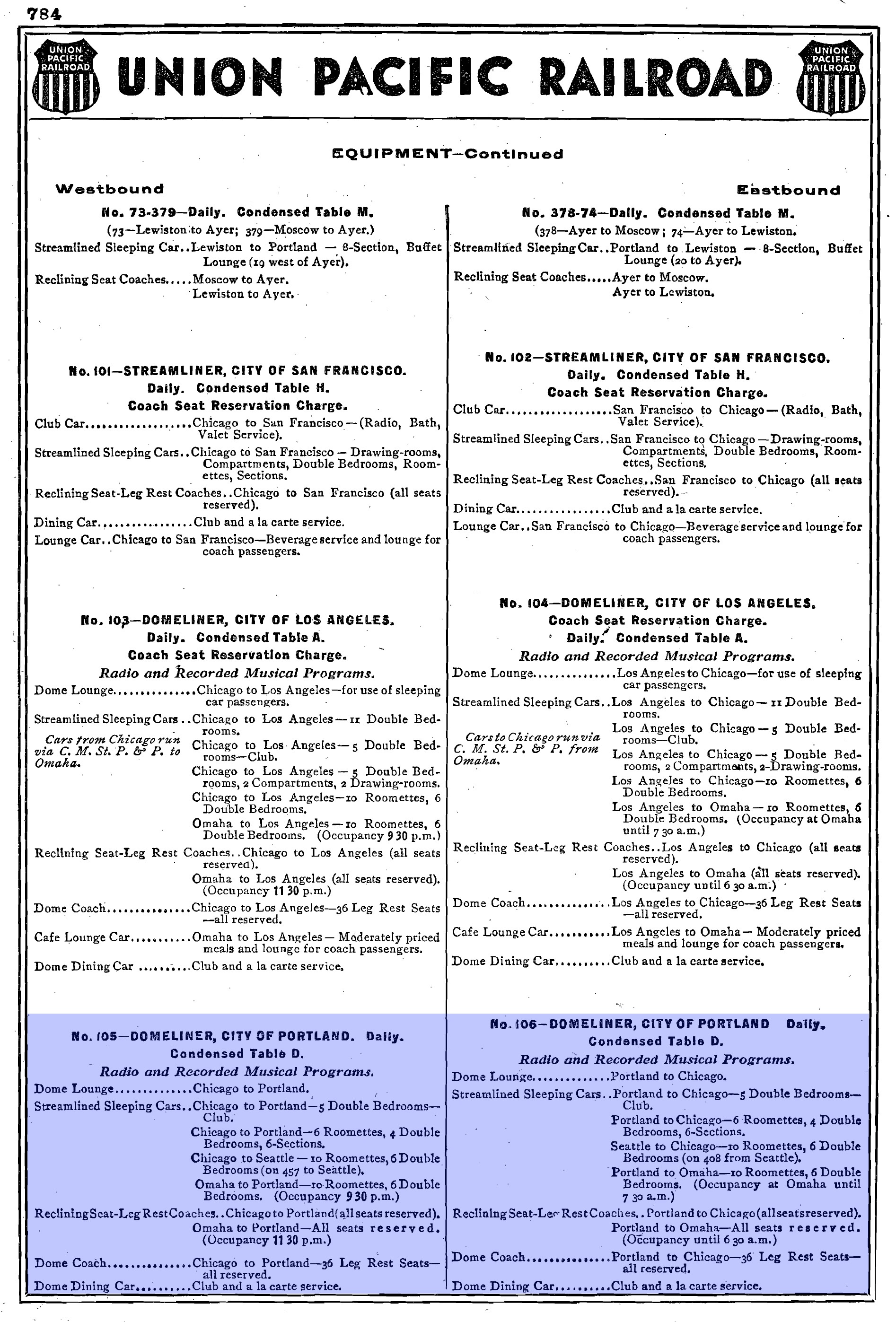 Overall, on a typical Portland train one could expect to find four Pullman sleepers, café-lounge, dome lounge-observation, dome coach, and a dome diner (in total the train's consist included about 13 cars).

For power the train featured E7s on the point, and later used both E8s and E9s (the last two E series models EMD ever produced).

Interestingly, despite the City of Los Angeles and City of San Francisco normally receiving the most attention by historians, UP always considered the City of L.A. and City of Portland its two, premier streamliners, providing them with the newest and best equipment as it became available. 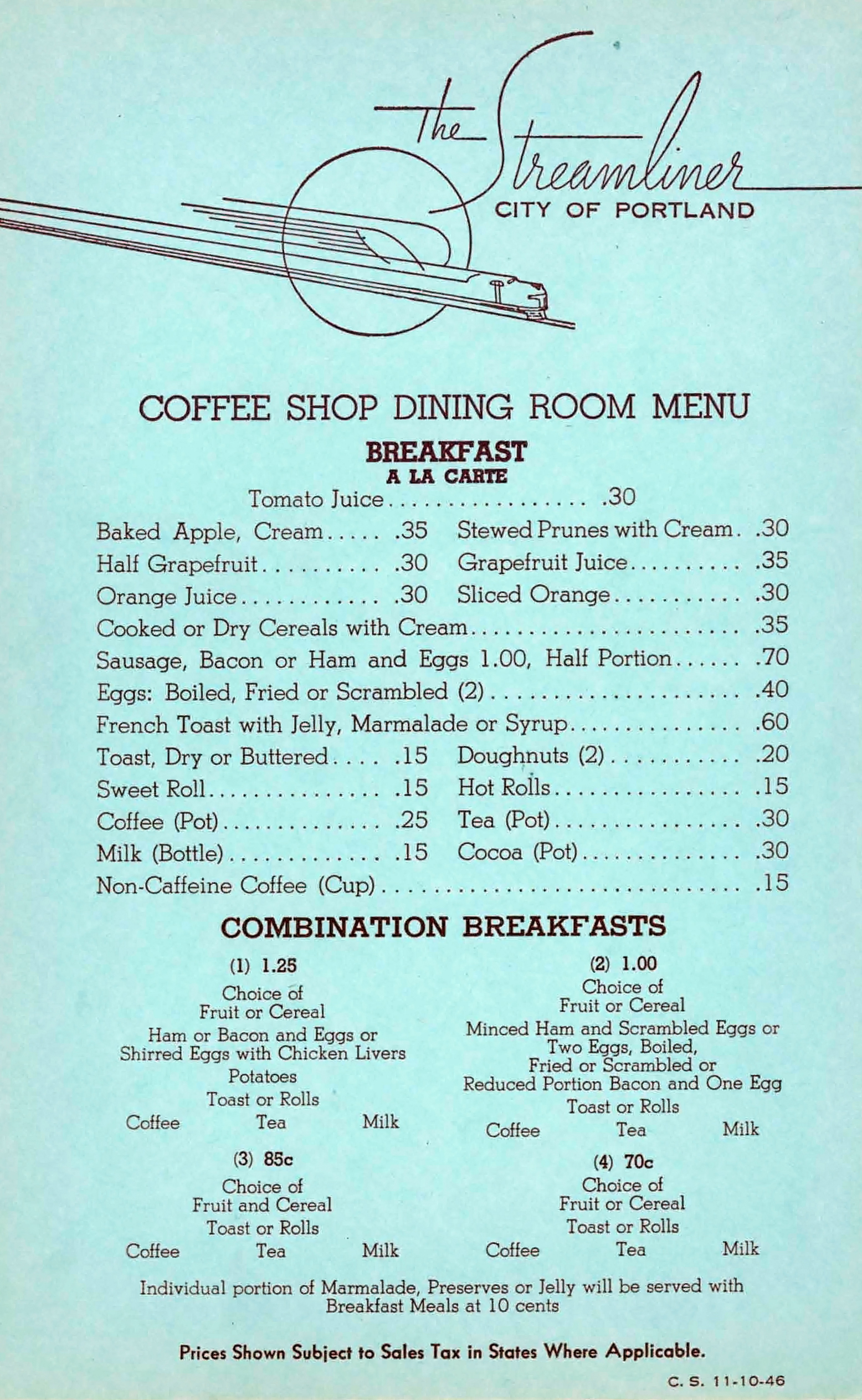 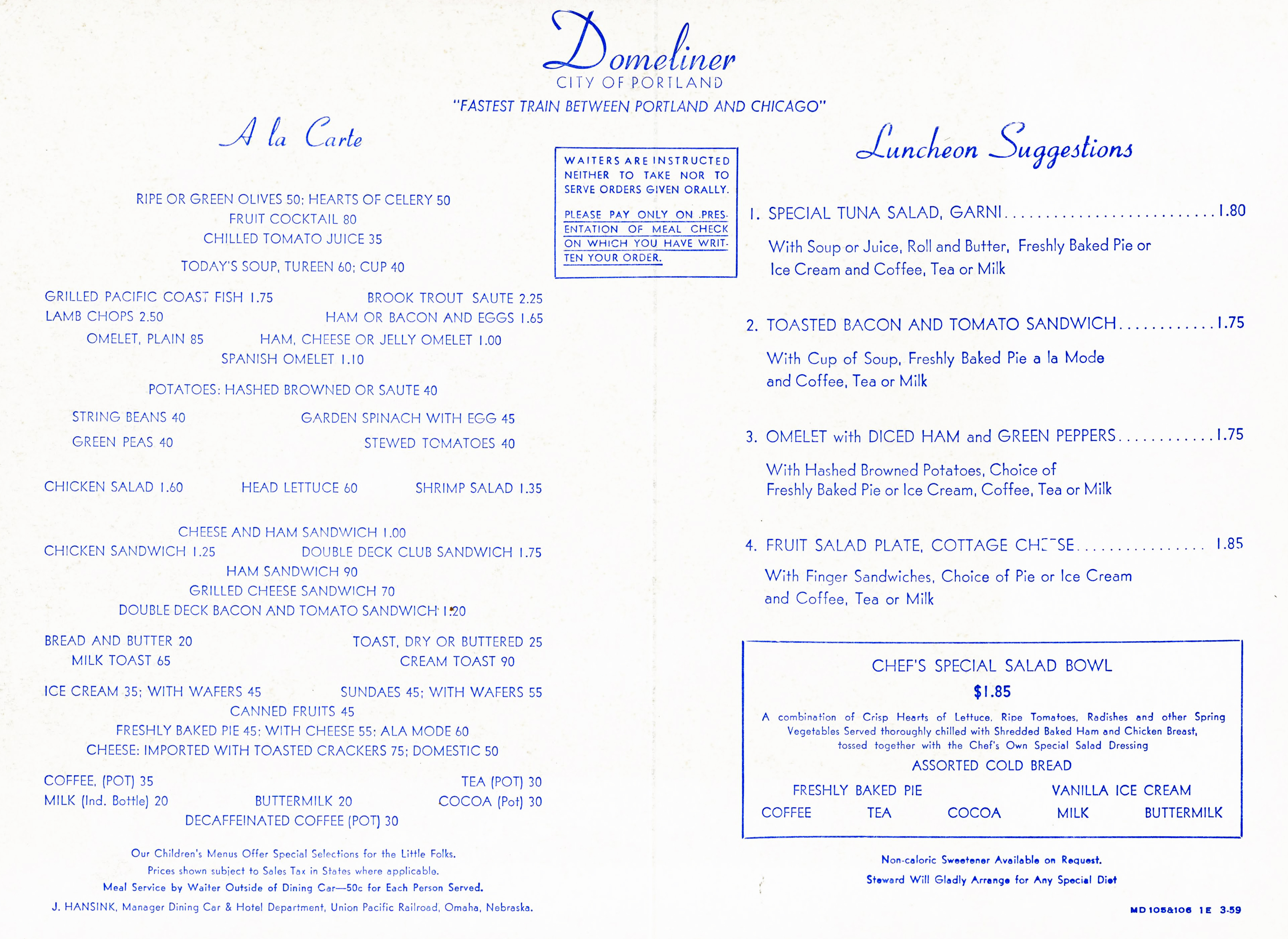 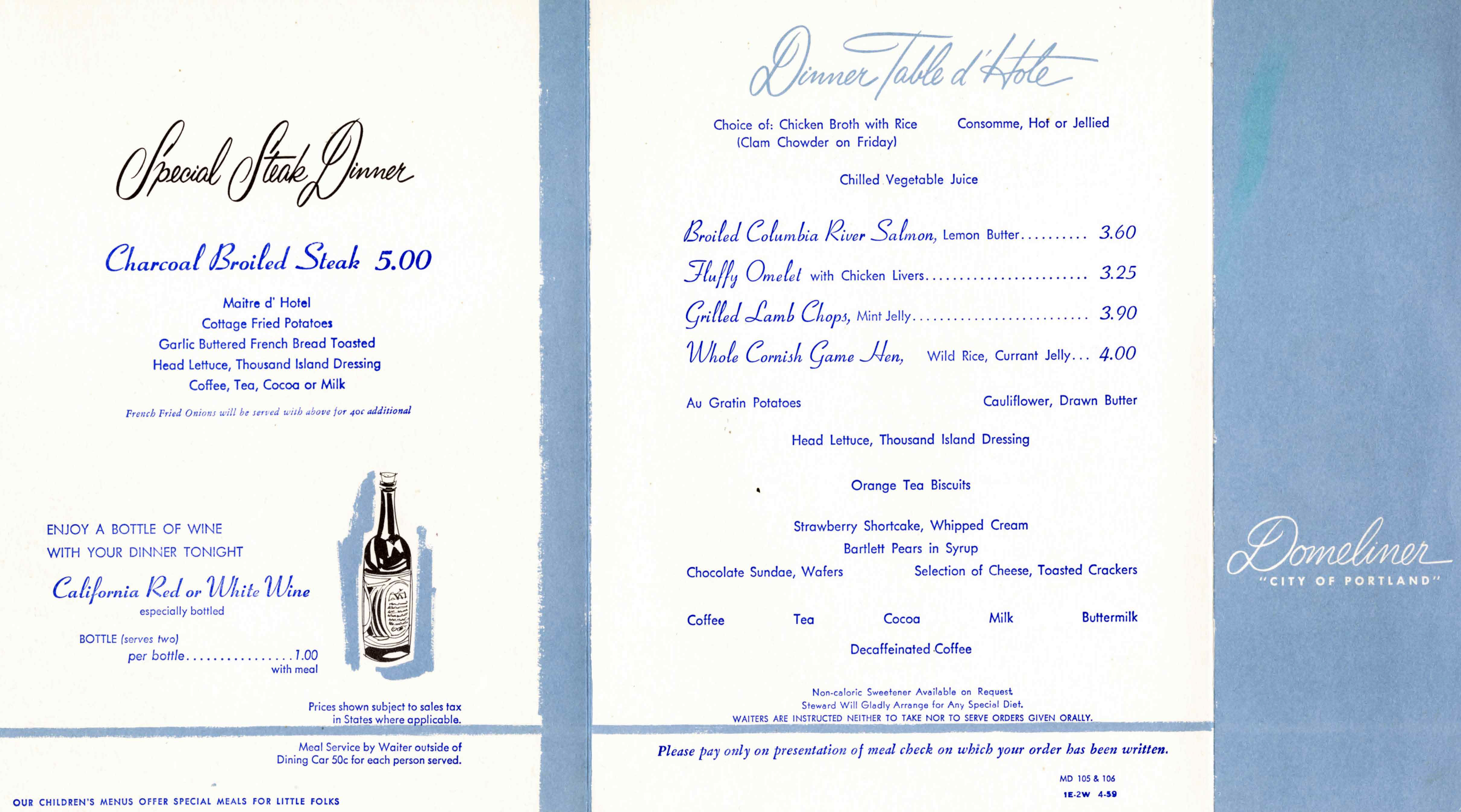 To provide passengers with the best viewing experience aboard the Portland the Union Pacific scheduled the train to run through darkness, as much as possible, east of Cheyenne, Wyoming so that patrons could enjoy the breathtaking views of the mountain ranges through western Wyoming, Idaho, and Oregon. 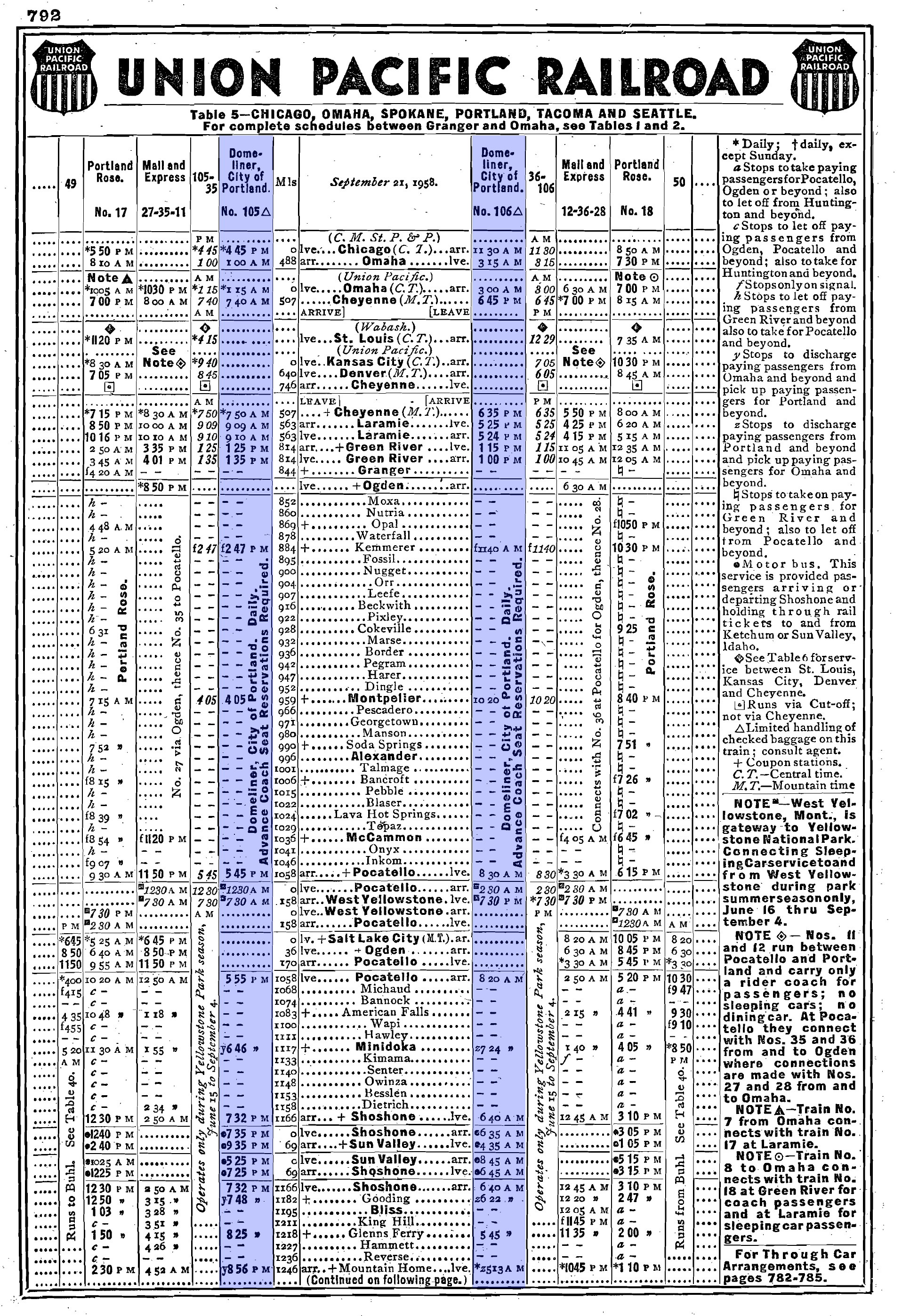 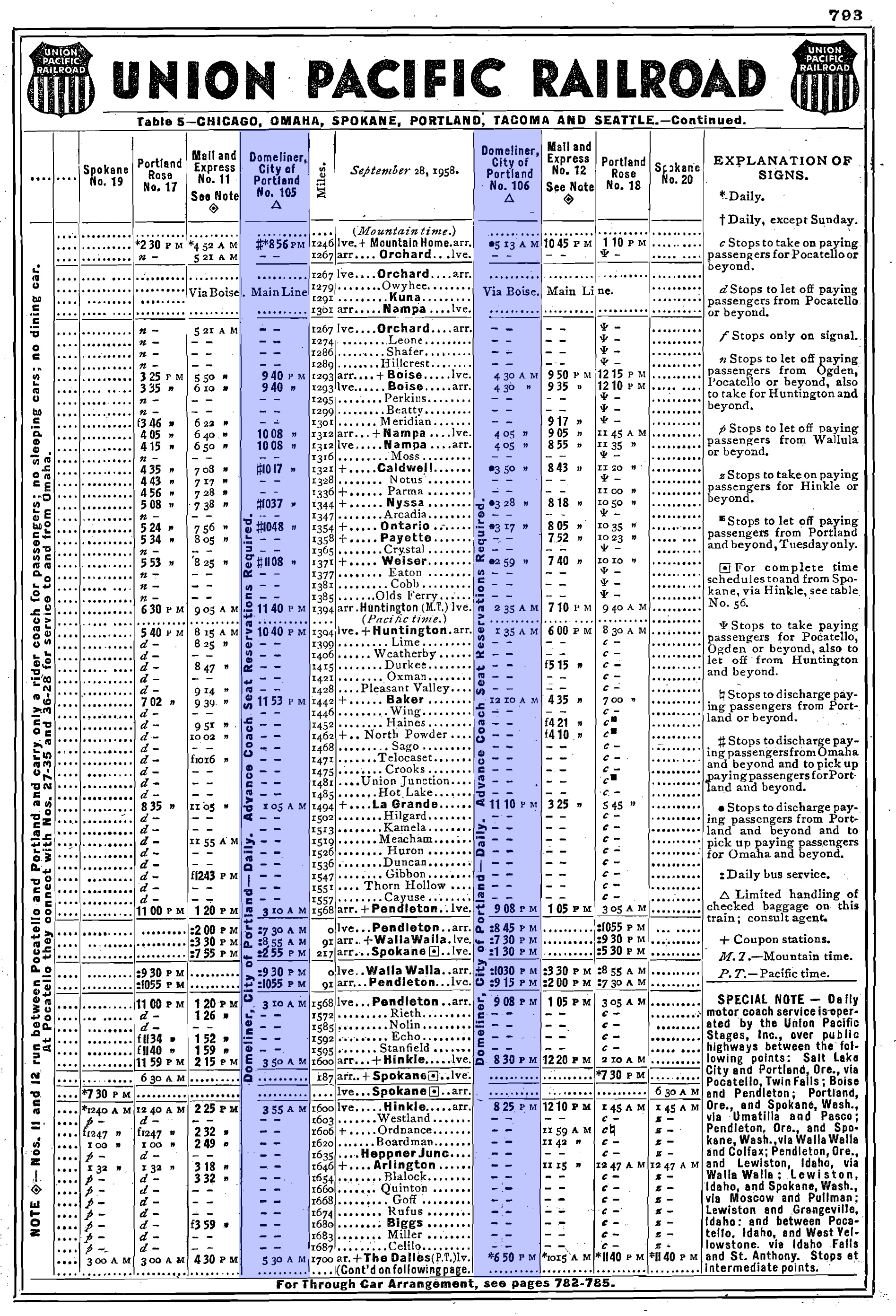 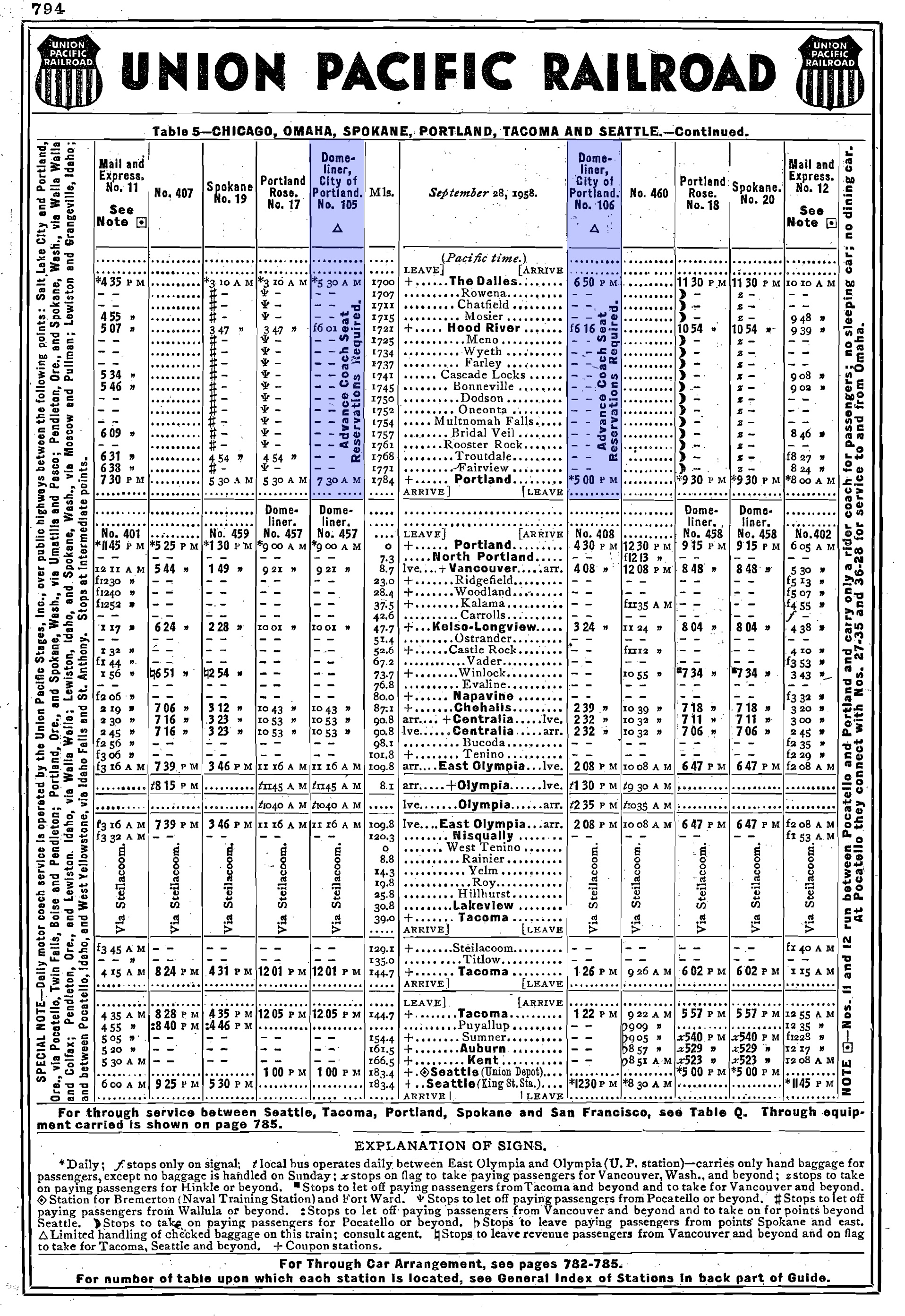 Listed as Trains #105 (westbound) and #106 (eastbound) on Union Pacific's official timetable, the Portland would leave Chicago Union Station around 5 pm in the evening and be handed off to the UP at Omaha around 1 am early the following morning.

From there patrons could wake up to breakfast at Cheyenne and see the gorgeous mountain views for the rest of the day, having dinner that evening in south-central Idaho as the continued westward.

Heading to bed that night passengers could then wake up early the next morning ready to de-board at Portland although the train did offer through sleeper service to Seattle.

Overall the trip would normally take just under 41 hours with UP able to carry an average train speed of nearly 56 mph (quite fast for the rugged country in which the railroad operated!).

Through the end the City of Portland, along with her sister City trains, remained a top-notch, all matching consist operation by Union Pacific although by the 1960s the railroad had combined most of its City fleet east of Wyoming.

While service remained at a high level this, however, did not secure the Portland or other City trains’ futures as they were all discontinued with the startup of Amtrak in the spring of 1971. Today, the trains live on in memory only and UP's official business train.