The company also offered a long list of secondary named trains, most of which provided service along its eastern divisions in the Midwest.

The Arrow was one such train, connecting the Windy City with Omaha and Sioux Falls, South Dakota via Sioux City, Iowa.

It was first launched during the 1920s, replacing two earlier trains known as the Omaha Limited and Sioux City Limited with through connections to a number of different trains.

As ridership declined and the Road pared down its passenger operations the Arrow was cutback and eventually discontinued during the late 1960s.

Like the Santa Fe, the Milwaukee Road often used the Native American theme with its passenger trains.  The most famous, of course, were the blazing fast Hiawatha speedliners (the company's term for streamliners) launched during the mid-1930s while others included the Arrow, Tomahawk, and Sioux (car names also often carried Native American names). 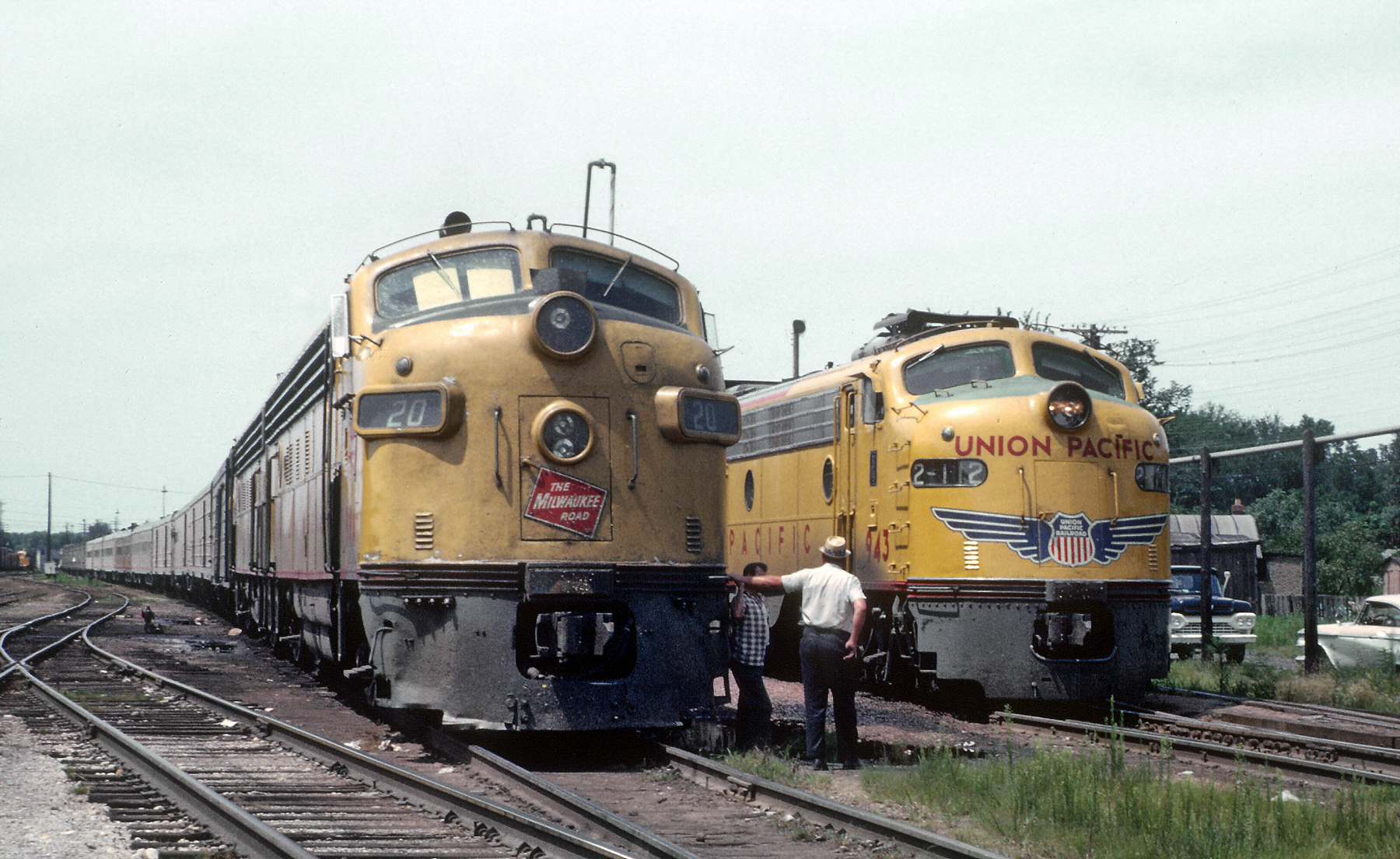 A Milwaukee Road F7A has train #20, the eastbound "Arrow," stopped at Savanna, Illinois in August, 1963. On the next track over is Union Pacific's train #112, the eastbound "City of Denver." By this era it wasn't uncommon to see UP power leading the "City" fleet over Milwaukee rails. Roger Puta photo.

The former entered the timetable during August of 1926 replacing the earlier Omaha Limited (later named the Omaha-Chicago Limited, trains #7 and #8) and Sioux City Limited (trains #6 and #11).

These runs had reached Omaha, Nebraska and Sioux City, Iowa via Chicago (running along the Iowa and Illinois Divisions) but the new Arrow (listed as trains #7 and #8) combined these two into one train with a section splitting at Manilla, Iowa.

Despite its status as a secondary train the Arrow under its original configuration provided many accommodations including:

According to Jim Scribbins' book, "Milwaukee Road Remembered," the train received cars with upgraded roller-bearing technology on July 26, 1929 but continued to retain its heavyweight status.

Also that year, a pair of limousine-lounge-observations (named Maquoketa and Waucoma they were rebuilt from former buffet-observations, complete with a simple "Arrow" drumhead) were assigned to it and quickly became the most popular feature offering valet service and a radio

In 1930 they received a telephone that even had it own number in the local Omaha and Chicago phone book while in-station.  The 1930s witnessed several upgrades to the Arrow.

During the summer of 1934 service was extended from Sioux City to Sioux Falls, South Dakota and the train received an air-conditioned lounge and diner (within a year it boasted full air-conditioned status).

A few months later in October the first modernized, streamlined coaches were assigned built at the railroad's fabled shops in Milwaukee (these cars began entering service before the launch of the original Hiawatha the following year).

During 1935 the short-lived limousine-lounge-observation was replaced by a 3-double-bedroom/1-compartment lounge and Class F6 Hudsons predominantly replaced Pacifics a few years earlier, workhorses of the steam era. 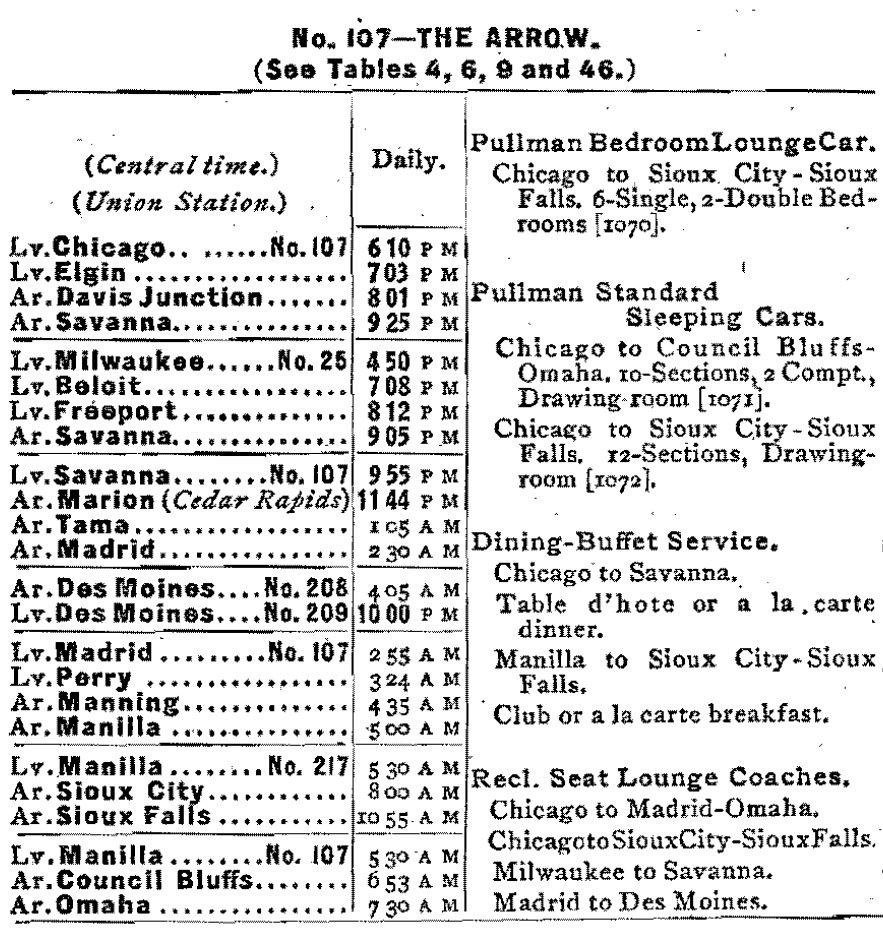 Of course, it wasn't uncommon by the 1940s to see the celebrated, streamlined Class A Atlantics or Class F7 Hudsons occasionally leading the train.  During 1937 the Arrow's train numbers were changed (one of many times this would happen) to #107 and #108 between Omaha and Chicago with the Manilla-Sioux Falls section receiving #117 and #118.

Interestingly, with the inauguration of the Midwest Hiawatha in late 1940, which eclipsed all other trains as the preeminent service on the Chicago-Omaha corridor, little changed with the Arrow except for [a short time] taking over mail/express duties of the discontinued locals #103 and #104 (Chicago-Omaha). 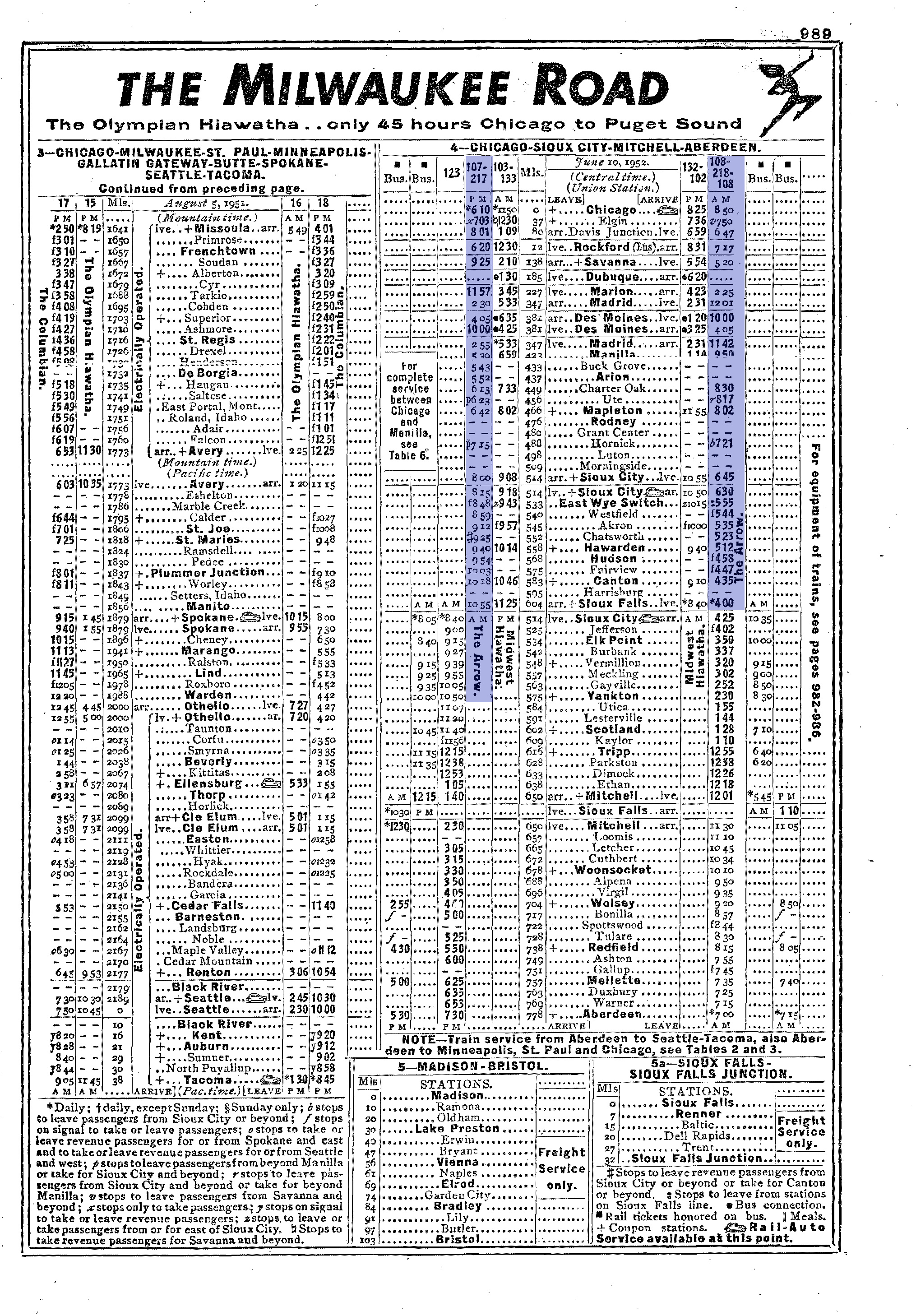 These beautiful locomotives were some of the powerful and most technologically advanced machines in the Milwaukee Road's arsenal, the final batch of ten (#260-269) acquired from Alco in 1943.

The Northerns remained in service through the mid-1950s and by then diesels had largely replaced steam on passenger assignments, including the Arrow.  In 1948 the train lost its diner between Omaha and Manilla.  Additionally, the following year the Des Moines-Sioux City, Milwaukee-Omaha, and Chicago-Des Monies through sleepers were all discontinued.

While the Midwest Hiawatha affected the Arrow little operationally it not surprisingly was hurting the train's ridership, and quite significantly after the war.  The Milwaukee took note of this and focused more specifically on the Sioux Falls/Sioux City section by the 1950s.

Despite ridership losses and cutbacks the 1950s did see some service improvements including the addition of streamlined sleepers during September of 1953 (first 10-roomette/6-bedrooms and later 14-roomette/2-drawing-room cars).

During late October of 1955 Union Pacific switched to the Milwaukee Road as its principal carrier of the City streamliners to Chicago, which brought a whole host of changes to passenger trains running the Omaha main line.  The Arrow saw its numbers changed twice, first as #109-110 and finally as #19-20.

During September of 1965 the train lost its remaining lunch-lounge (Chicago-Savanna) and its Manilla-Sioux Falls section was discontinued around the same time (an interesting move considering this corridor's status only a decade earlier).  Following these cutbacks the Arrow became yet another coach-only operation that limped along until it was discontinued after October 5, 1967.