The Norfolk and Western 1218 was part of the railroad's "Class A" 2-6-6-4 steam locomotives. These steamers had no formal name although aside from the N&W's three other railroad's used the 2-6-6-4 locomotives including the Seaboard Air Line, Erie, and Pittsburgh & West Virginia.

Today, Norfolk and Western 1218 is the sole surviving 2-6-6-4 and is preserved in excellent condition (despite missing many parts from a partial rebuild never completed it the 1990s) at the Virginia Museum of Transportation in Roanoke.  There are no plans at present to see the big locomotive restored to operation. 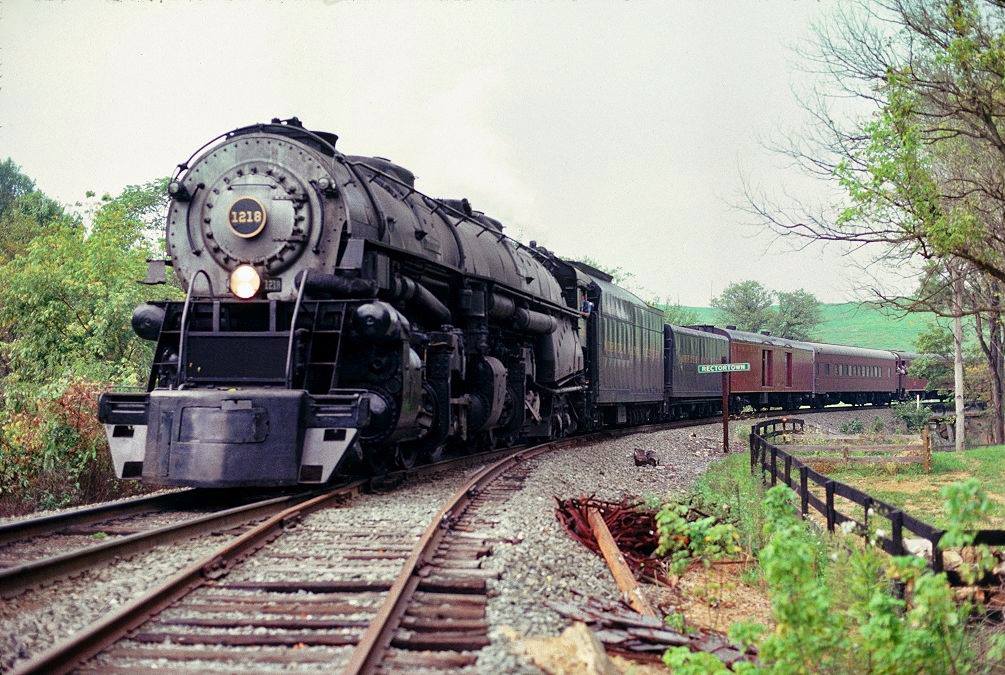 Norfolk & Western 2-6-6-4 #1218 (A) with an excursion on the former Southern at Rectortown, Virginia during October of 1990. Photographer unknown.

The Norfolk and Western 1218 and its sister Class A 2-6-6-4s were unique in their ability to both pull heavy loads in drag service while also clipping along the main line at better than 70 mph.

Along with their fabulously engineered 4-8-4 J-Class steamers, the 2-6-6-4s were perhaps the finest such locomotives the N&W's shop forces ever produced. Aside from the N&W's astronomical earnings derived from hauling coal, the railroad was also successful because of its sound management practices.

First and foremost the railroad always made sure its physical plant was in top-notch condition, pouring millions annually into maintenance programs. Likewise the N&W was meticulous about keeping its locomotive fleet and equipment in good running order.

Most notable here was the railroad’s legendary steam locomotive fleet. With plenty of online fuel for its locomotives and initially unimpressed with diesel’s advantages, the N&W maintained a healthy steam roster until the late 1950s and built its last new steamers as late as 1955 (S-1a 0-8-0s)!

Because of this dedication to steam (long after all other Class I's had given up on the motive power) the Norfolk & Western obviously had the most technologically advanced geared locomotives in the country, which included things such as rolling bearings on wheels and high-capacity boilers.

The N&W ran three classes of main line steamers towards the end, which included the A, J, and Y6:

During the latter half of the 1930s the Norfolk & Western was in need of more modern and efficient steam locomotives to pull their heavy coal trains along their rugged main line in western Virginia, and southern West Virginia. What they developed was a four-cylinder simple articulated steam locomotive with a 2-6-6-4 wheel arrangement. However, the design wasn't new at the time.

Two other railroads, including the Erie and P&WV, were already operating similar designs although the N&W's first two models, #1200 and #1201 were much more powerful.

The Norfolk & Western was quite impressed with the 2-6-6-4s its Roanoke shops constructed, which featured a boiler pressure of 315 pounds-per-square-inch and a tractive effort nearing 126,000 pounds! Comparable articulated steam locomotives, such as Union Pacific's 4-6-6-4's, could not even produce a tractive effort of 100,000 pounds.

The locomotives also featured the latest in steam technology such as roller bearings on rods and axles. Following the N&W's original two 2-6-6-4s it had its shops construct eight more in the late 1930s. By the time the railroad was finished with Roanoke building these locomotives, with the final order of eight arriving around 1950, it owned some 43 2-6-6-4s.

The Norfolk and Western 1218 was part of twenty-five built during World War II and all of the Class A models featured comparable boiler pressures, driver sizes, and tractive efforts.

For more information about N&W's Class As please refer to the chart below. Ironically, Norfolk and Western 1218 probably would not have been saved had it not been for the locomotive being purchased by Union Carbide for use as a static boiler in one of its plants in 1960.

However, five years later it arrived a better fate when it was purchased by Nelson Blount for part of his steam collection at his new railroad museum in Bellows Falls, Vermont known as Steamtown, USA. Here it remained for several years before being pulled, cold back to Roanoke for use in a temporary exhibit at the Virginia Museum of Transportation.

The Norfolk & Western primarily used two whistles during the late steam era; a customer-designed "hooter" whistle used on freight locomotives (which included the Class A, K-1, M, S, Y, and Z) and a Hancock 3-chime "steamboat" whistle featured on passenger locomotives, like the streamlined J's and K-2's.

The latter featured a deep, haunting sound that echoed and reverberated through the hills and hollers of the Appalachians.  Typically, the "hooter" sounded similar to the Hancock 3-chime but not as haunting.  In addition, a good engineer could make it produce a range of sounds from chirps to shrills.

As the story goes, the museum came to believe it had rightful ownership of Norfolk and Western 1218. In 1985 Norfolk Southern entered the fray when it wanted to overhaul the locomotive for use in excursion service as part of its steam program.

As such the railroad essentially refused to return the locomotive to Steamtown even though the organization held title to it. With no way to get back it back, Steamtown settled on a trade, receiving Nickel Plate Road GP9 #514 and Wabash SW8 #132.

Despite N&W #1218 returning under its own power in 1987 its excursion service with sister #611 lasted just four years. It went in for an overhaul in 1992 and before the work could be completed Norfolk Southern management cancelled the steam program in late 1994.

Interestingly, Norfolk Southern again decided to restart its steam program in the summer of 2010 using locomotives from the Tennessee Valley Railroad (two Southern steamers, a 2-8-2 and 2-8-0, and a former Army 2-8-0).

In any event, with this renewed program and #611 being in such excellent condition one cannot help but wonder if it will also be part of the program at some point in the future.

The hope of returning #1218 under steam, however, is a far more daunting task. Despite its excellent physical condition the locomotive is missing many parts from the partial rebuild. While not impossible such a restoration could happen its chances are slim for this reason.