Pere Marquette 1225, when built in the early 1940s was simply one of more than three dozen 2-8-4 "Berkshire"-type steam locomotives the railroad purchased during that time.

The graceful and powerful locomotives used by the PM had a very short career, lasting just a few years with their original owner and only about 10 more with their new owner, the Chesapeake & Ohio.

The Berkshire managed to survive the scrappers torch and spent an incredible 14 years under restoration before returning to steam.

Today, the locomotive is owned by the Steam Railroading Institute and usually hosts annual excursion trips somewhere around the country (normally near its home in Owosso, Michigan).

Beginning in 2010 the locomotive was out-of-service completing her FRA mandatory 15-year inspection/overhaul and returned to operational status in late 2013.

While she hosts excursions at various times throughout the year the locomotive stands out each Christmas as the real Polar Express locomotive.  SRI does not partner with Rail Events to host the actual trip; instead, they run their own version behind the big locomotive. 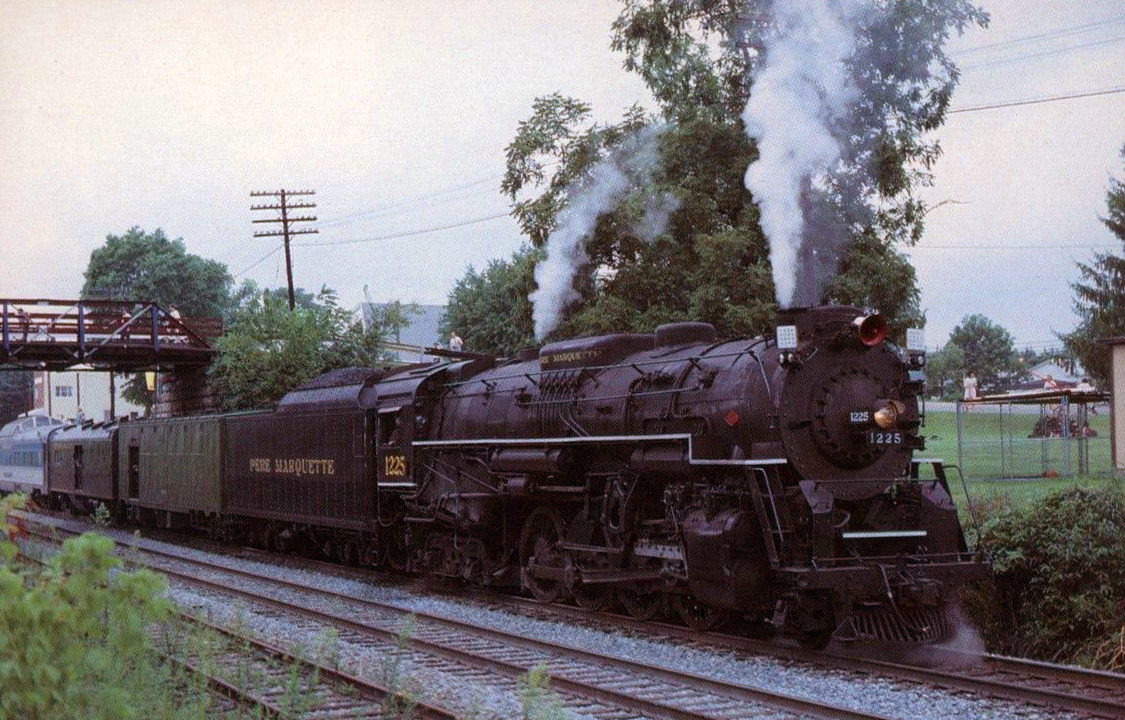 Looking for more horsepower and a beefier mainline locomotive to haul its fastest and most prominent freight trains, in the latter 1930s the Pere Marquette Railway placed an order for 39 Berkshire-type steam locomotives from the Lima Locomotive Works.

The Berkshire locomotive came about because due to Lima's hope (an established and well-known manufacturer of steam power) to improve upon the USRA Mikado design (2-8-2), which lacked sufficient speed and horsepower.

Based initially from a New York Central's Class H-7 Mikado, what Lima ultimately came up with was a locomotive that included a larger, 100 square foot firebox which necessitated the need for an extra trailing axle.  The addition of this axle gave the new design (listed as Class A-1) a 2-8-4 wheel arrangement.

The new locomotive would get its name, Berkshire, because of where it was first tested, the Berkshire Hills on the Boston & Albany Railroad in 1925.

After very successful tests against a Class H-10 Mikado where the Class A-1 easily outperformed its counterpart (the Class A-1 left Selkirk Yard nearly 50 minutes after the Class H-10 and pulled a train that was over 600 tons heavier yet arrived at North Adams Junction ten minutes ahead of the Mikado), the B&A quickly ordered a fleet of 45 Berkshires.

The railroad's 2-8-4s came listed in three different classes; Class N, Class N-1, and Class N-2. The Pere Marquette 1225 was delivered in 1941 as part of the railroad's Class N-1 Berkshires (all three types varied very little amongst one another), which included road numbers 1216-1227 that were capable of producing 69,350 pounds of tractive effort. 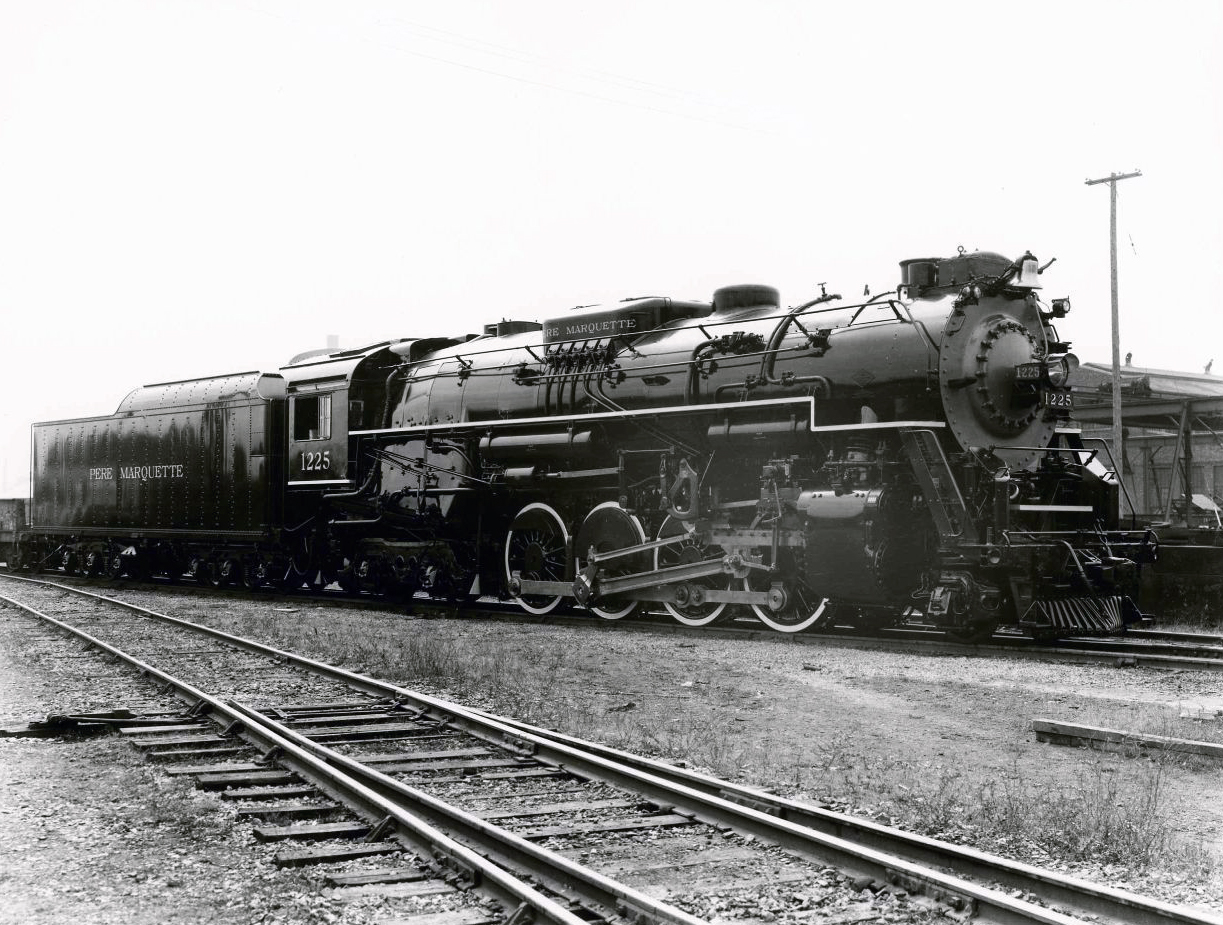 The history of the Pere Marquette can be traced back to 1900 through the merger of several smaller systems across Michigan.  Eventually, the railroad would operate a network spanning much of the state and connecting cities such as Detroit, Flint, Grand Rapids, Saginaw, and Lansing.

It also reached Toledo (Ohio), Michigan City (Indiana), and into southern Ontario at St. Thomas.  The PM proved an important transportation artery but struggled to maintain a level of healthy profits falling into receivership twice during the early 20th century.

Its Berkshire locomotives were some of the last and most technologically advanced to ever operate on the railroad.  They were intended for use pulling heavy, fast freights between Detroit, Grand Rapids, and Saginaw were the performed exemplary.

As part of the Van Sweringen's properties the PM had access to the Advisory Mechanical Committee, according to Brian Solomon's book "American Steam Locomotive."

The brothers owned several railroads at one time including the PM, Missouri Pacific, Texas & Pacific, Erie, and Chesapeake & Ohio.  They created this committee for their portfolio as a means of creating new locomotives and assigning them to the various properties.

Most often the brothers stuck with Lima, located in their home state of Ohio, and as a result was fond of the Berkshire locomotive.  After the PM's takeover by the Chesapeake & Ohio in 1947, #1225 and the rest of the Berkshires carried on in regular service on home rails until 1952 at which point all were retired (interesting, 1225 remained in its original livery until the end).

The locomotives were capable of a top speed reaching 70 mph, although typically never approached this mark.  They could, however, cruise comfortably in expedited freight service at 50 mph. 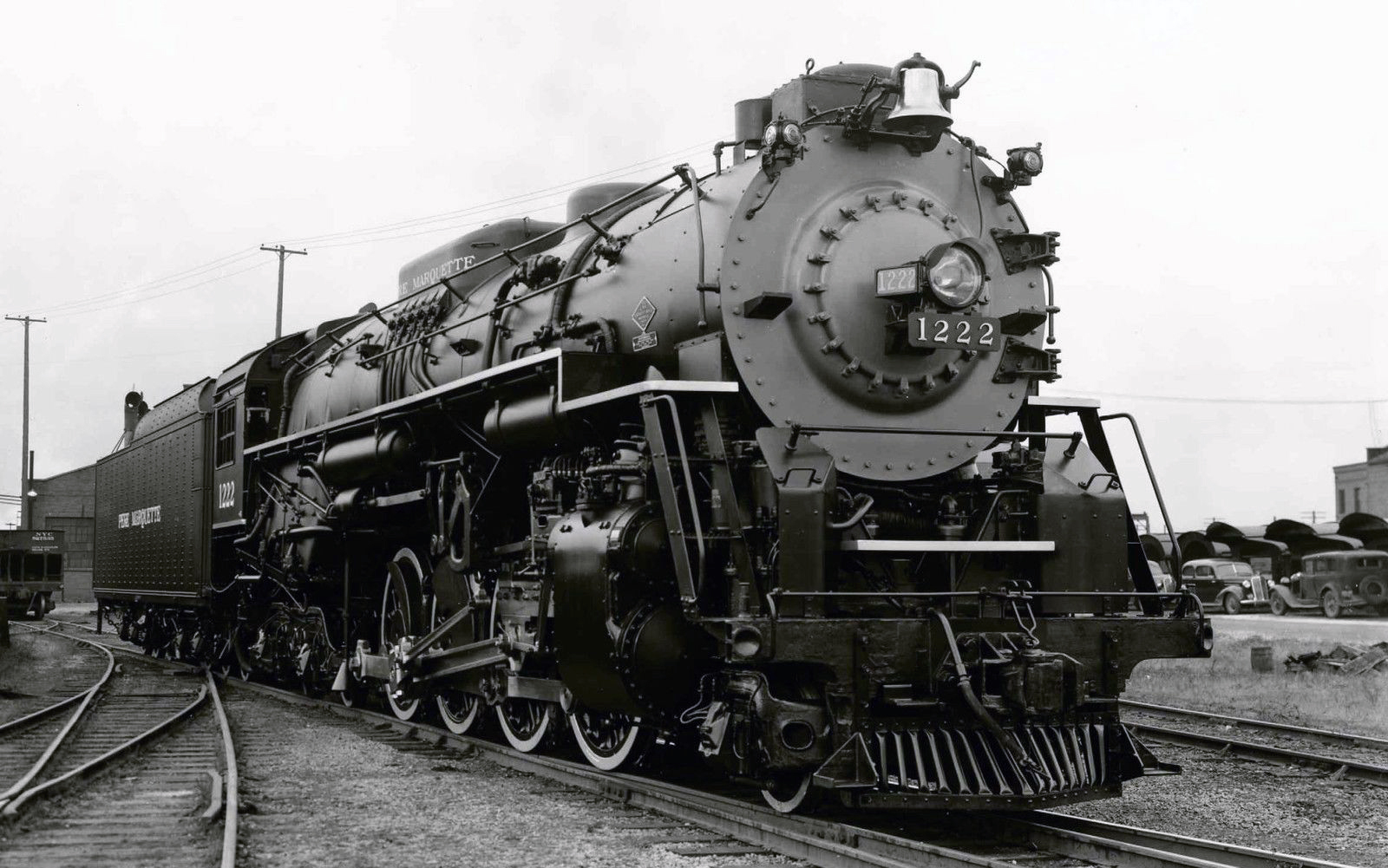 However, the merger stipulated that only PM equipment fully paid could be repainted and renumbered which resulted in only Class N actually saw C&O numbers.

Following their retirement the Berkshires remained stored for a few years; the Class N's were mostly scrapped around 1954 while the newer classes survived until the 1956-57 time period.  It is said that some thirteen locomotives were saved at New Buffalo, Michigan until 1961 when apparently many of these also fell to the scrapper's torch.

In the end, only two examples survived for posterity; Class N-1's #1225 and #1223, the latter of which is currently owned by the Tri-Cities Historical Society and sits on display at Grand Haven, Michigan.

The locomotive utilizes a 5-chime Nathan whistle, as delivered from the Lima Locomotive Works.  The whistle features a higher-pitched note and overall carries a classic steam locomotive sound, slightly trailing off towards the end.

Realizing the historical significance of #1225, Michigan State University stepped in and acquired it in 1957 after being asked by then-C&O chairman Cyrus Eaton if MSU would like one of the 2-8-4's in storage.

The school eventually accepted one  from the C&O, which happened to be #1225. It was cosmetically restored by the railroad before delivery and was placed on static display near Spartan Stadium.

Here it remained until 1971 when a recently formed railfan group, Michigan State University Railroad Club, began looking at the locomotive's possible restoration back into operating condition.  After the club formed the Michigan State Trust for Railway Preservation it formally received the locomotive from MSU in 1978.

With help from "Project 1225" and other donors, along with another seven years of hard work the locomotive returned to full operation in November, 1985 (sister #1223 donated several of her parts during this endeavor). 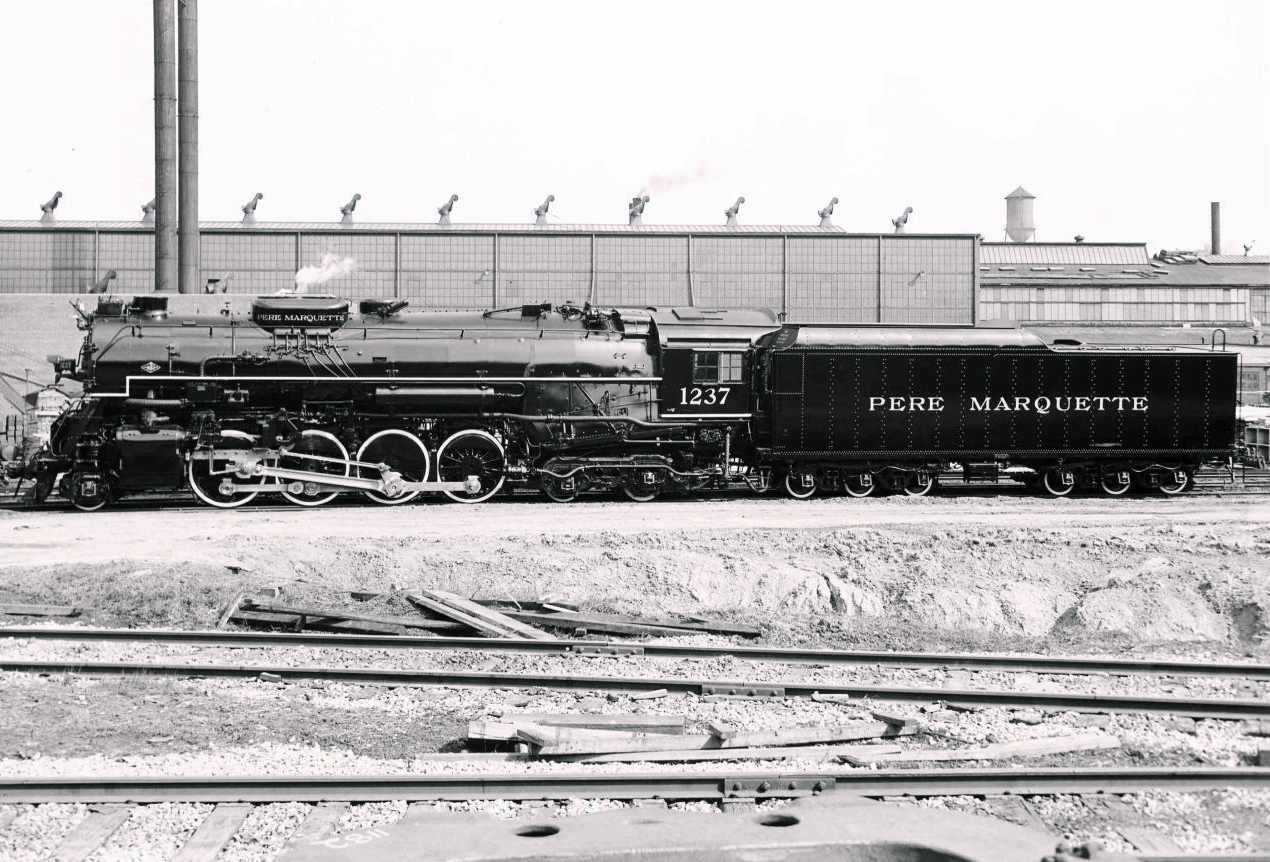 Today the group is known as the Steam Railroading Institute and is based in Owosso, Michigan where the PM 1225 is stored.  The SRI does more than maintain the locomotive, however, as it also now operates excursion trains annually and generally looks to tell the story of the railroad industry as a whole.

To learn more about the locomotive and when it will be operating and plan a trip to see it please visit the institute's website by clicking here.

The Berkshire had its biggest moment in 2004 when it was the star in the hit movie, The Polar Express, as the locomotive's blueprints where used to construct the digital version used in the movie. Even more, the locomotive's sounds and steam whistle was also incorporated into the movie.