The H16-44 would prove the builder's most successful road-switcher of the five it ultimately cataloged.

Not only did this particularly locomotive see strong sales but the company also found a variety of buyers including foreign lines in Mexico as well as orders through its subsidiary, the Canadian Locomotive Company.

The H16-44 was virtually identical to its sister model, the H15-44, save for a slight increase in horsepower, which came to be a strong selling point for the model.

Fairbanks-Morse's four axle road-switchers were actually quite similar to its standard switcher line except for the location of the cab; switcher cabs were always located at end of the carbody while road switchers' were off-set allowing for a short, high hood.

The success of this model is somewhat surprising given FM's struggles in the road-switcher market.

It attempted to offer the very powerful H24-66 "Train Master" but the model failed to gain much interest, along with the builder's other road-switchers.

Baldwin and American Locomotive saw similar struggles attempting to break Electro-Motive's monopoly of that era.  Despite the many H16-44s built and sold just three remain preserved today; none of which are extant in the United States. 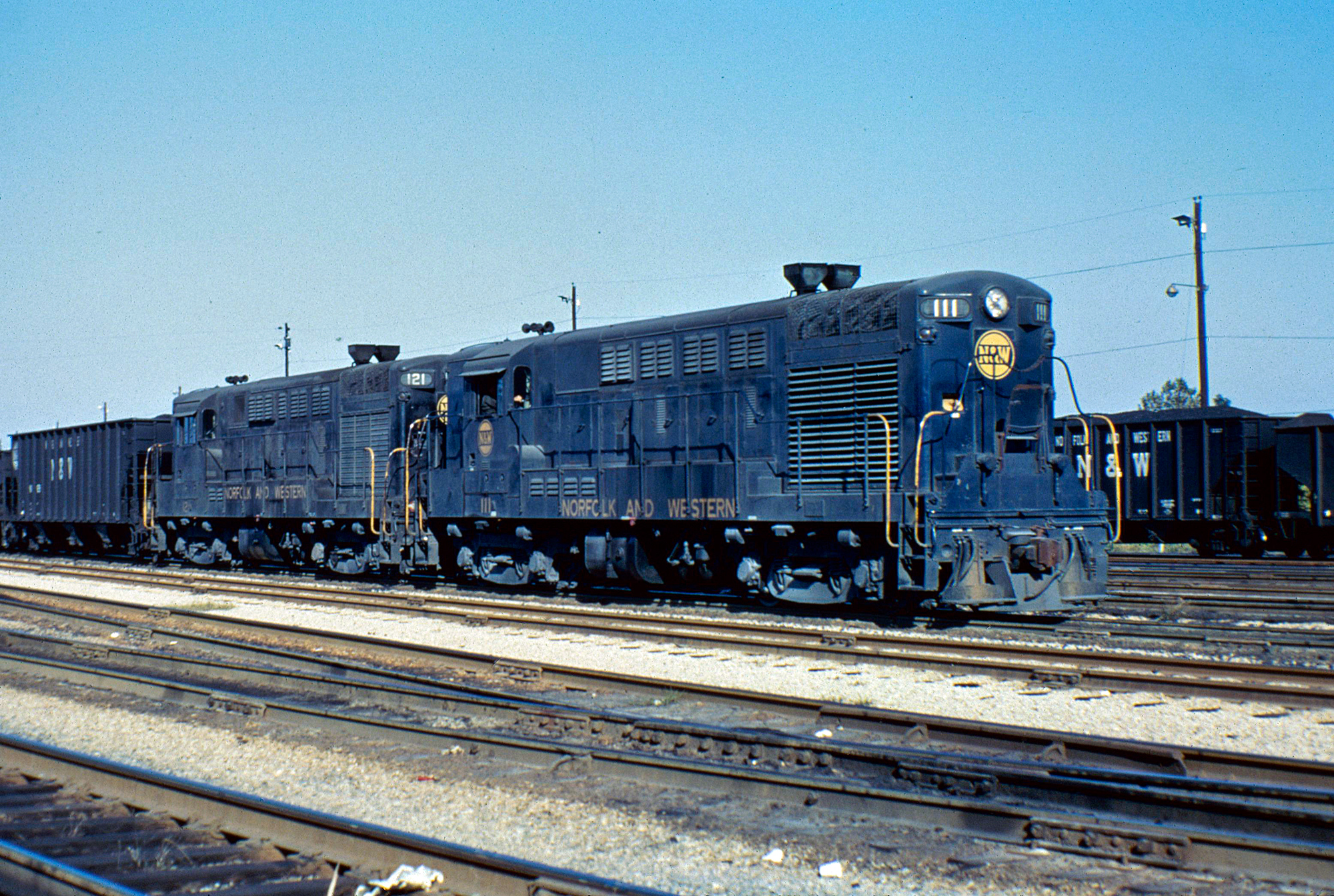 The H16-44 began production in the spring of 1950, following the earlier H15-44 model. It utilized Fairbanks Morse standard 2-cycle 38D8 1/8 opposed piston prime mover which could produce a slight increase of 1,600 horsepower.

It used swing bolster, drop-side equalizer trucks, commonly found on all of its four-axle road switchers.

The exterior of the H16-44 was the work of industrial designer Raymond Loewy who gave the road-switcher soft, beveled touches and clean lines.

It actually looked quite nice and overall was similar to the enhancements Loewy applied to Baldwin-built road switchers, such as its Standard line of the early 1950s. 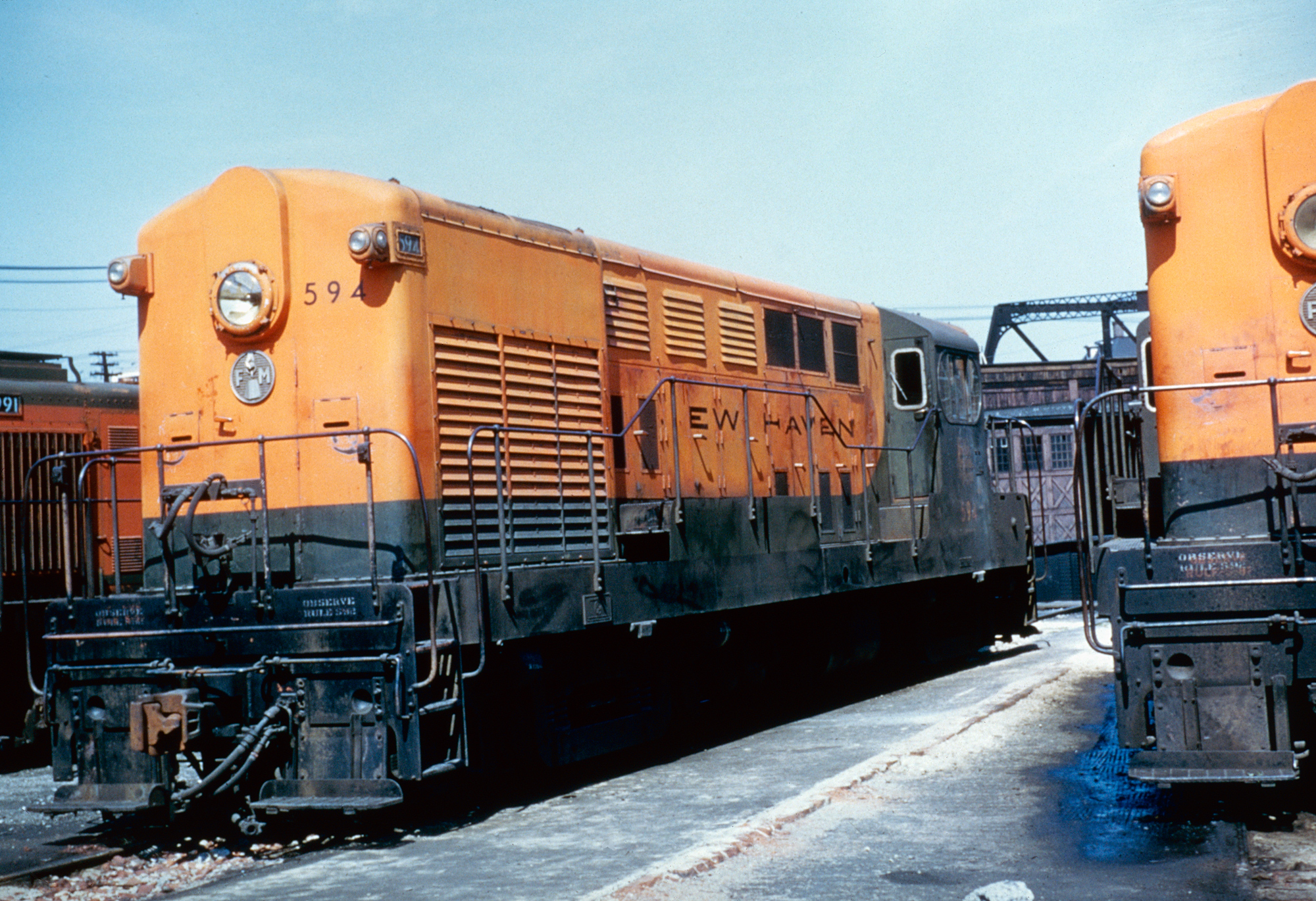 During production, FM was forced to find a new supplier for electrical equipment (such as traction motors, generators, auxiliary generators, etc.) as Westinghouse ended manufacturing these components.

The move was somewhat surprising considering the company's traction motors were rugged and of very high quality.  They have even been argued as superior to Electro-Motive's products at the time.

This discontinuance also hurt Baldwin, then a Westinghouse subsidiary, which relied on its equipment.  As a result of the decision, FM began outsourcing to General Electric in 1954. 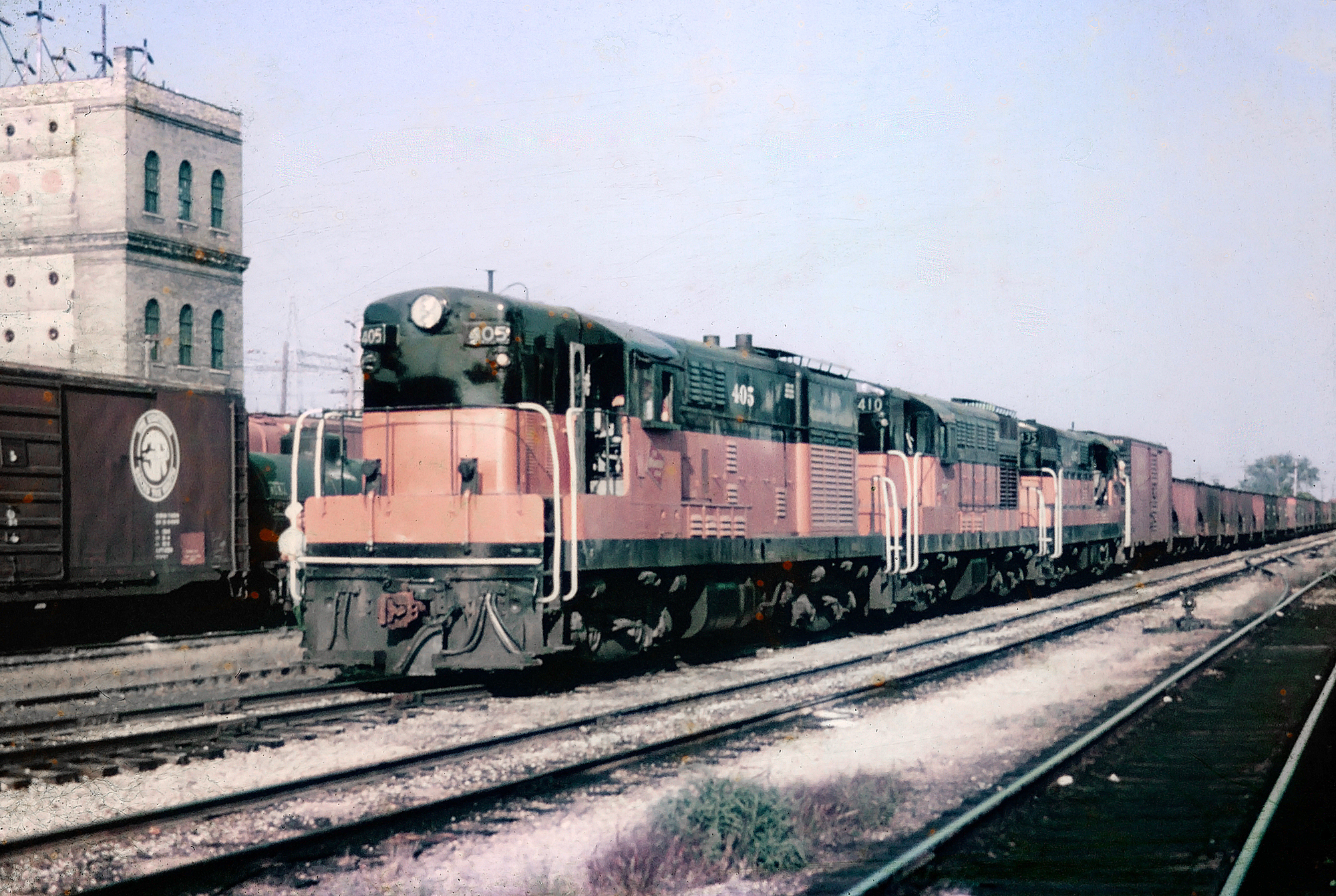 * The final locomotive to be out-shopped with Westinghouse equipment was Milwaukee Road #2462.

Of note, Milwaukee Road #2458-2462 were equipped with Westinghouse electrical gearing. 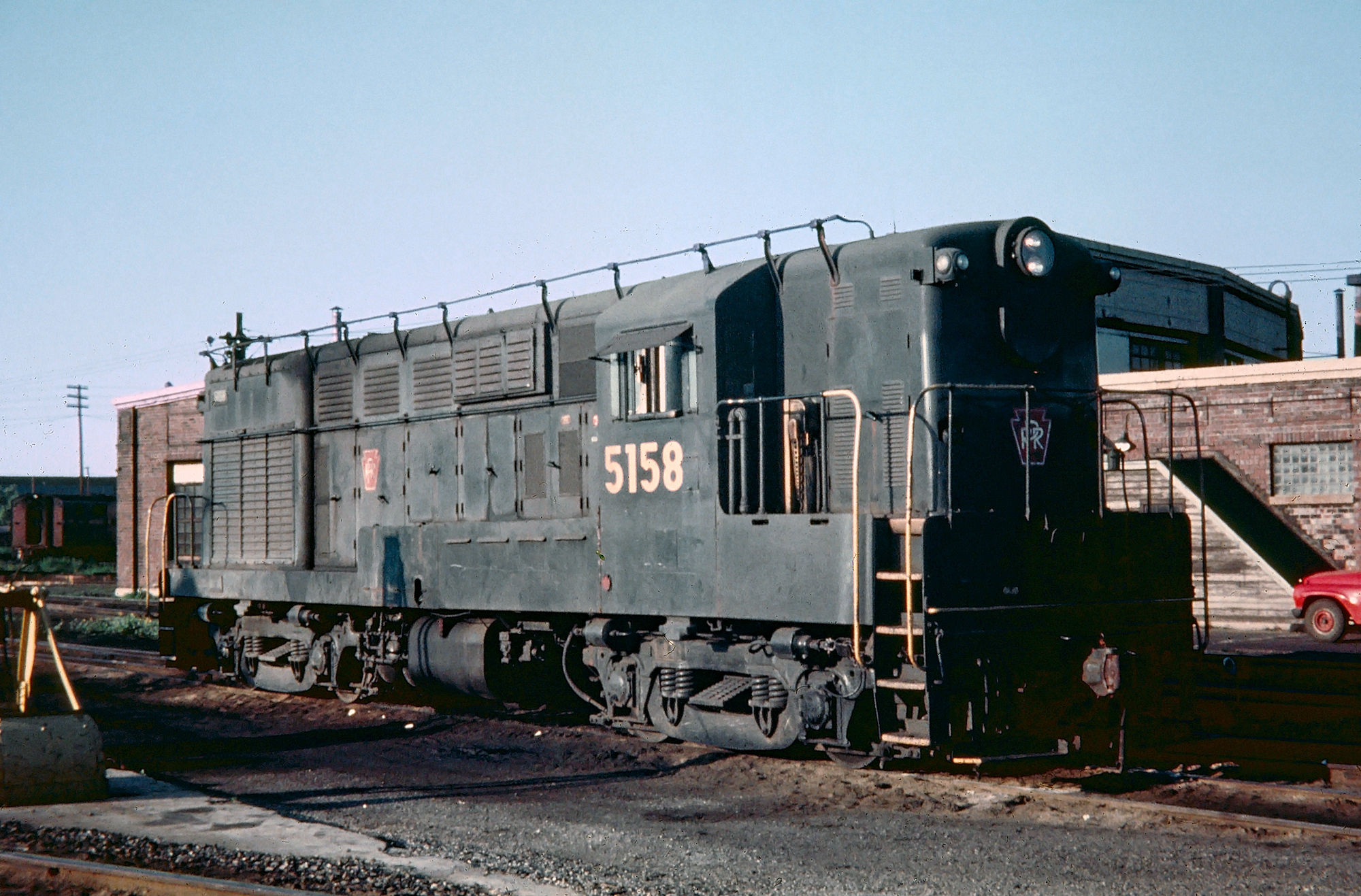 Pennsylvania H16-44 #5158 is seen here in Chicago between assignments during the summer of 1966. Fred Byerly photo. American-Rails.com collection. 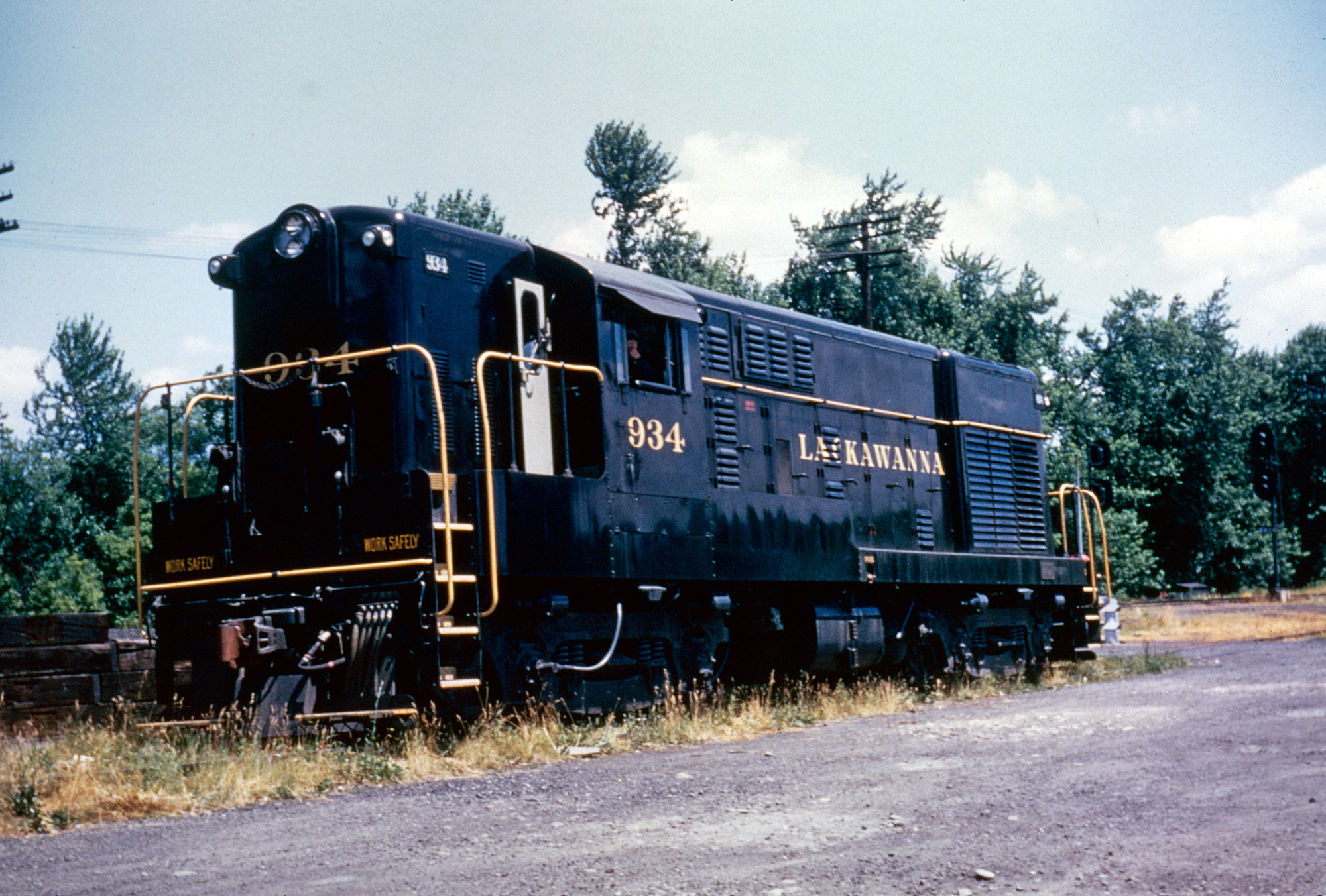 Delaware, Lackawanna & Western H16-44 #934 is seen here on the Bangor & Portland Branch. Given the locomotive's fresh paint and like-new appearance, the photo probably dates to the summer of 1953, about 6 months after she was delivered to dieselize this segment of the railroad. American-Rails.com collection.

When production began on the H16-44 it quickly found a following; by 1950, some lines like the Akron, Canton & Youngstown and Pittsburgh & West Virginia had become loyal FM customers.

Finally, the Canadian Locomotive Works built 58 units for the Canadian National and Canadian Pacific, the former of which apparently really liked the model buying 40 examples.

Interestingly, while there were many FM H16-44s built few remain preserved, one of which is a former CP unit (#8554 in Calgary, Alberta at the Locomotive & Railroad Historical Society of Western Canada and two former Chihuahua Pacifico units in Mexico, #524 and #525.