The 2-10-4 "Texas" was an offshoot of two different classes of steamer; the 2-10-2 Santa Fe by adding an extra axle to the trailing truck and Lima's popular 2-8-4 Berkshire, which was extended with an added driving axle.

Initially an experimental by the Santa Fe the 2-10-4 received its name from the Texas & Pacific, which was the first railroad to operate a true, dedicated version of the locomotive. While the Texas had fewer issues than the 2-10-2 less than a dozen lines ultimately used it in service.

In the end the T&P would end up with the second largest fleet of units while the Pennsylvania Railroad rostered more than 100 due to a power shortage at the time.

Today, nine examples of this Super Power steamer remain preserved although none are currently operational; seven in the United States and two in Canada.

One of Texas & Pacific's original 2-10-4's, #610, spent five years in excursion service following her retirement from the railroad in 1951.

In 1976 she was reactivated to power the "American Freedom Train" that year, a nationwide event celebrating America's railroads and Bicentennial.  Alas, the big Texas was subsequently retired again in 1981 and remains inactive today. 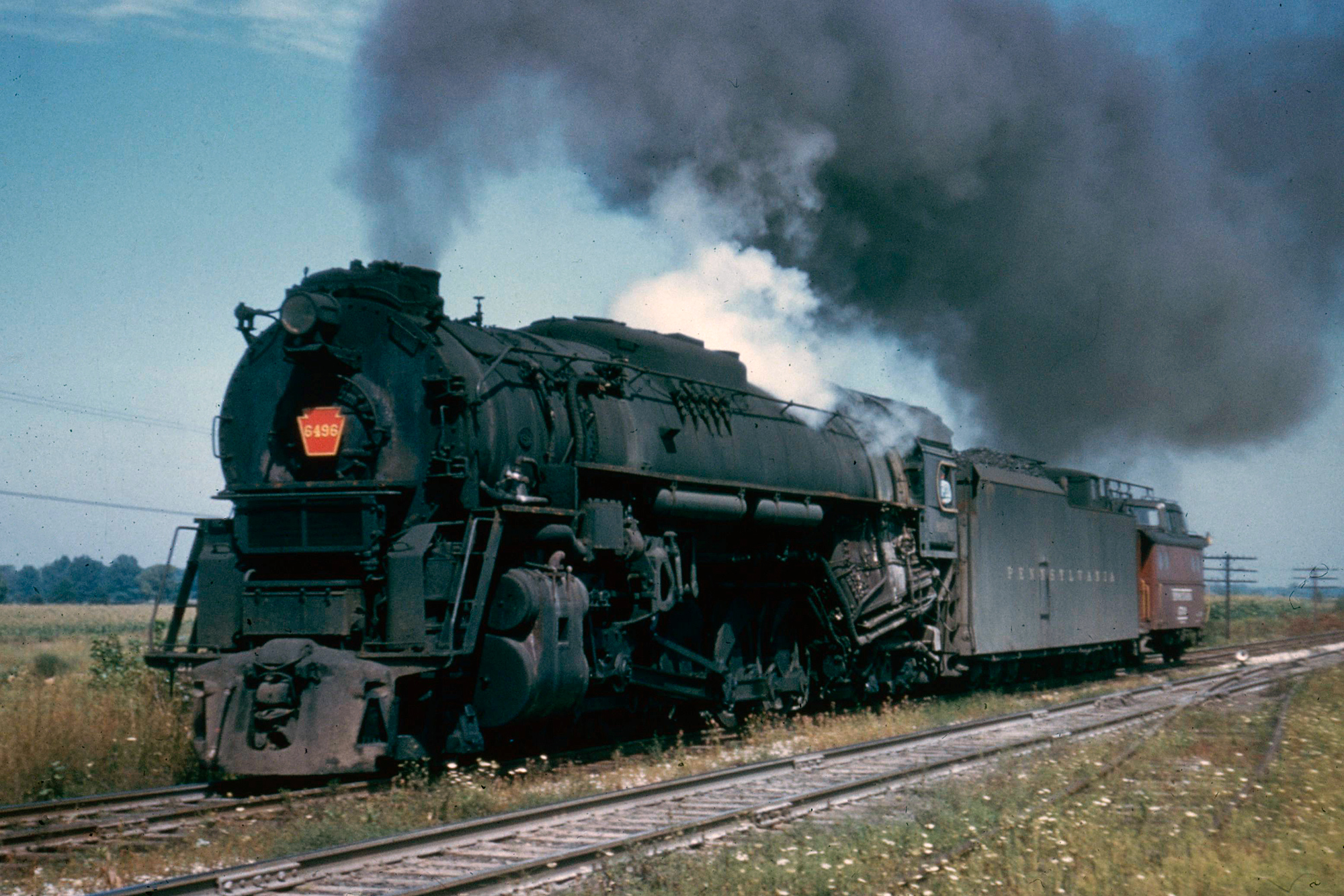 The railroad requested the builder deliver one of them with an experimental added trailing axle giving it a 2-10-4 wheel arrangement and numbered 3829. Many roads disliked the 2-10-2 due to its counterbalancing issues, which not only damaged the locomotive but also the track.

To keep this from happening most were employed in heavy drag service, operating under 30 mph, such as the Baltimore & Ohio's popular "Big Sixes." However, the AT&SF liked the design very well, owning more than 350 examples (far more than any other railroad).

Upon taking delivery of #3829 the Santa Fe put the locomotive through a various testing to see how it performed compared to a 2-10-2.

The railroad was indifferent with the results and placed no additional orders for a separate 2-10-4 design for more than a decade (this may be partly explained by the fact that the locomotive was simply a 2-10-2 without an serious modifications aside from the added rear axle).

For the most part the wheel arrangement was shelved until 1925 when the Lima Locomotive Works designed a new 2-10-4 built from the ground up and based from its successful 2-8-4 that had only been first tested that same year.

The Texas & Pacific, a Missouri Pacific subsidiary, was the first road to purchase this new steamer and thus was given the honors of naming it, choosing "Texas." 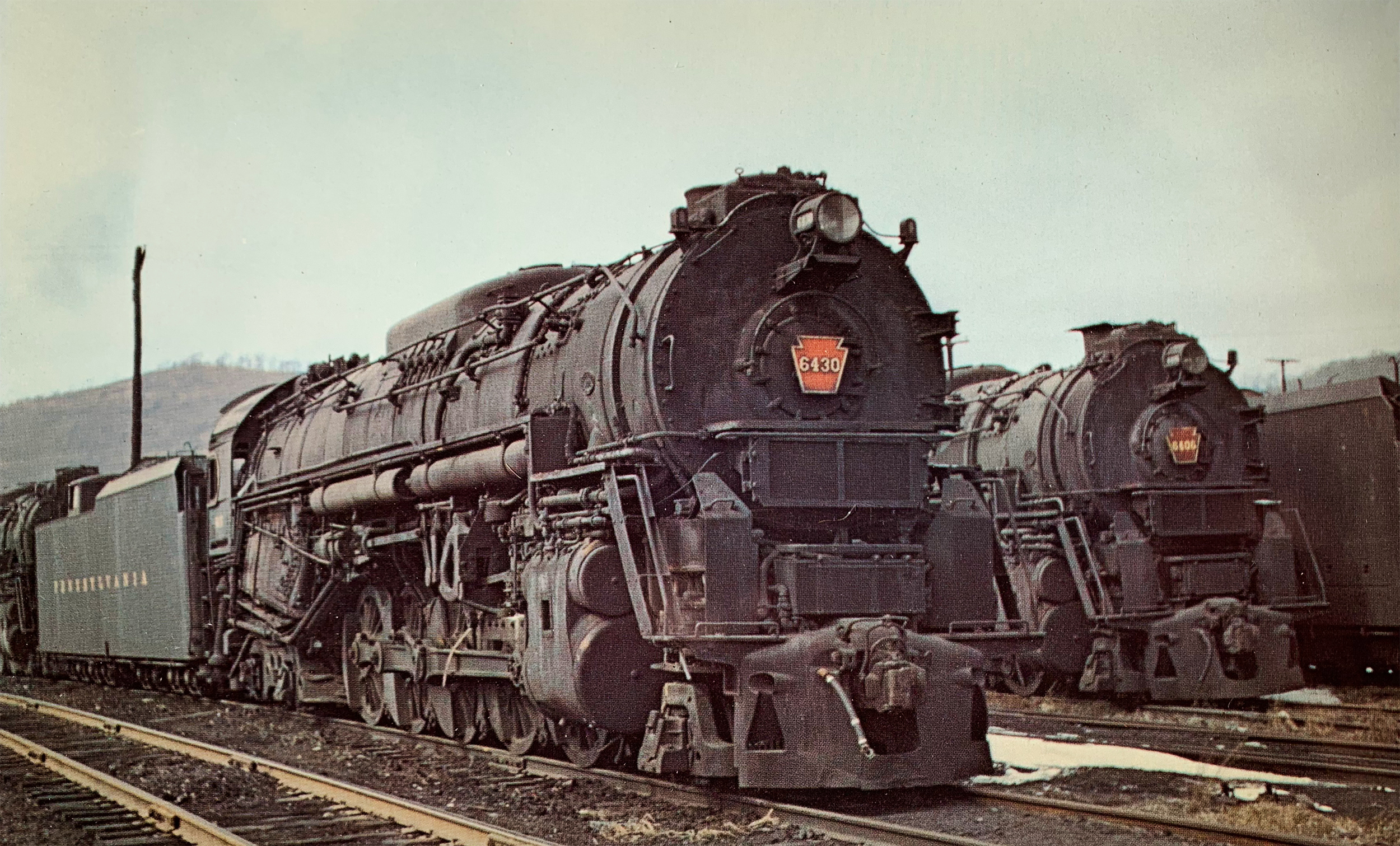 A big Pennsylvania Railroad 2-10-4 #6430 (J-1) was photographed here in storage at Pitcairn, Pennsylvania following its retirement on March 2, 1957. Author's collection.

Its first batch of ten 2-10-4s was listed as Class I-1 and numbered 600-609. While powerful with a tractive effort exceeding 80,000 pounds these units also experienced balancing issues since their drivers of between 60 and 63 inches were too small to offset the heavy counterweights needed on the wheels (due to the large rods and valve gear).

This problem was corrected when the Chesapeake & Ohio and Advisory Mechanical Committee tested a Erie-designed 2-8-4 in 1930 that was extended with an extra axle of drivers. This locomotive featured driving wheels of 70 inches, which were large enough to negate the balancing issue.

With this success the C&O went on to purchase the now-reliable, powerful, and fast Texas Type; it picked up thirty examples from Lima numbered 3000-3039 and listed as Class T-1 in 1930.

The information above lists those railroads that owned Texas Types and how many (of note, the CP and Burlington chose to call their 2-10-4s by a different name; labeling them Selkirks on the CP and Colorados on the Burlington).

After initial problems with the design were mitigated the 2-10-4 sold nearly 500 units built by Lima, Baldwin, the American Locomotive Company (Alco), Montreal Locomotive Works (for the Canadian Pacific), and the Pennsylvania’s own Altoona shops (which built 125 between 1942 and 1944 when it was not allowed to construct its own designs due to war restrictions).

However, like with all Super Power steam locomotives developed during the 1920s the 2-10-4 had a relatively short life span with the oldest models only about 30 years of age before all were retired in the 1950s (some, like those owned by the Bessemer & Lake Erie only saw a service life of 10+ years before being scrapped) in favor of more efficient diesels.

The 2-10-4's horsepower rating varied depending on the railroad and other factors: SteamLocomotive.com notes that variants on the Bessemer & Lake Erie boasted over 4,600 boiler horsepower while the Santa Fe's were rated at 6,000 piston horsepower. 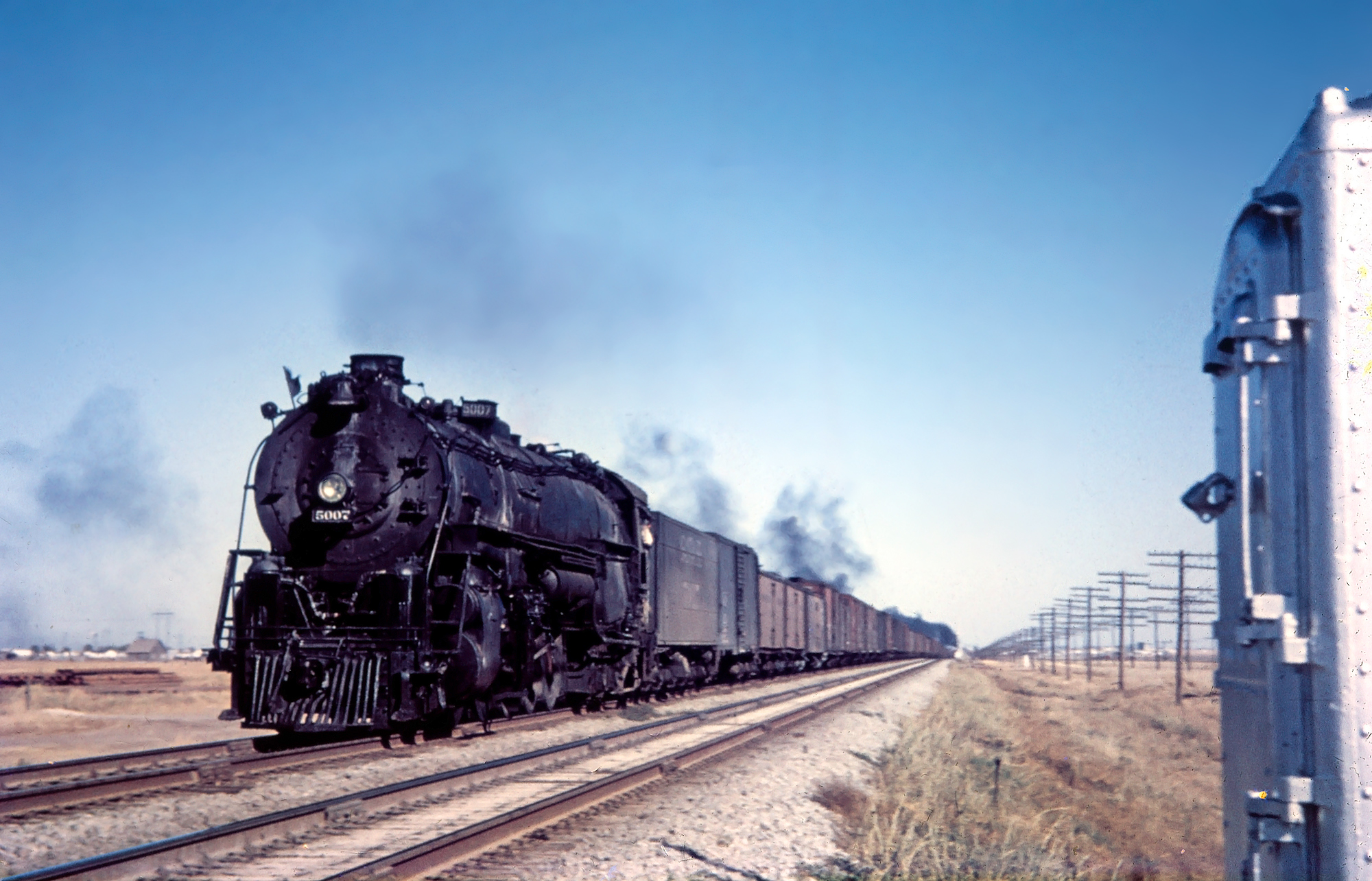 Today, there are no known operating 2-10-4s either in the U.S. or Canada. For several years in the 1970s and 1980s T&P #610 was used to pull various excursions and participated in the American Freedom Train to celebrate the bicentennial in 1976.