The 2-6-6-4 wheel arrangement was a late era steam design first put into service during the mid-1930s on the Pittsburgh & West Virginia.  Interestingly, while four railroads operated these locomotives they were never given a formal name like the Challenger, Big Boy, Allegheny, or Yellowstone.

They became famous on the Norfolk & Western, whose Roanoke Shops built a fleet of 43.  Grouped as part of their A class these 2-6-6-4's were both powerful and fast, speeding heavy freights along the main line between Williamson, West Virginia and Columbus, Ohio.

According to SteamLocomotive.com their ratings were as follows: 13,000 tons in drag assignments between Williamson and Portsmouth and 5,200 tons of time freights between Portsmouth and Columbus.

In addition, they could pull passenger consists as an impressive 70 mph.  Today, just one 2-6-6-4 is preserved, Norfolk & Western #1218 which was world renowned for years hosting Norfolk Southern excursions during the 1980s and early 1990s.  Alas, she is only partially complete internally following an unfinished overhaul in 1994. 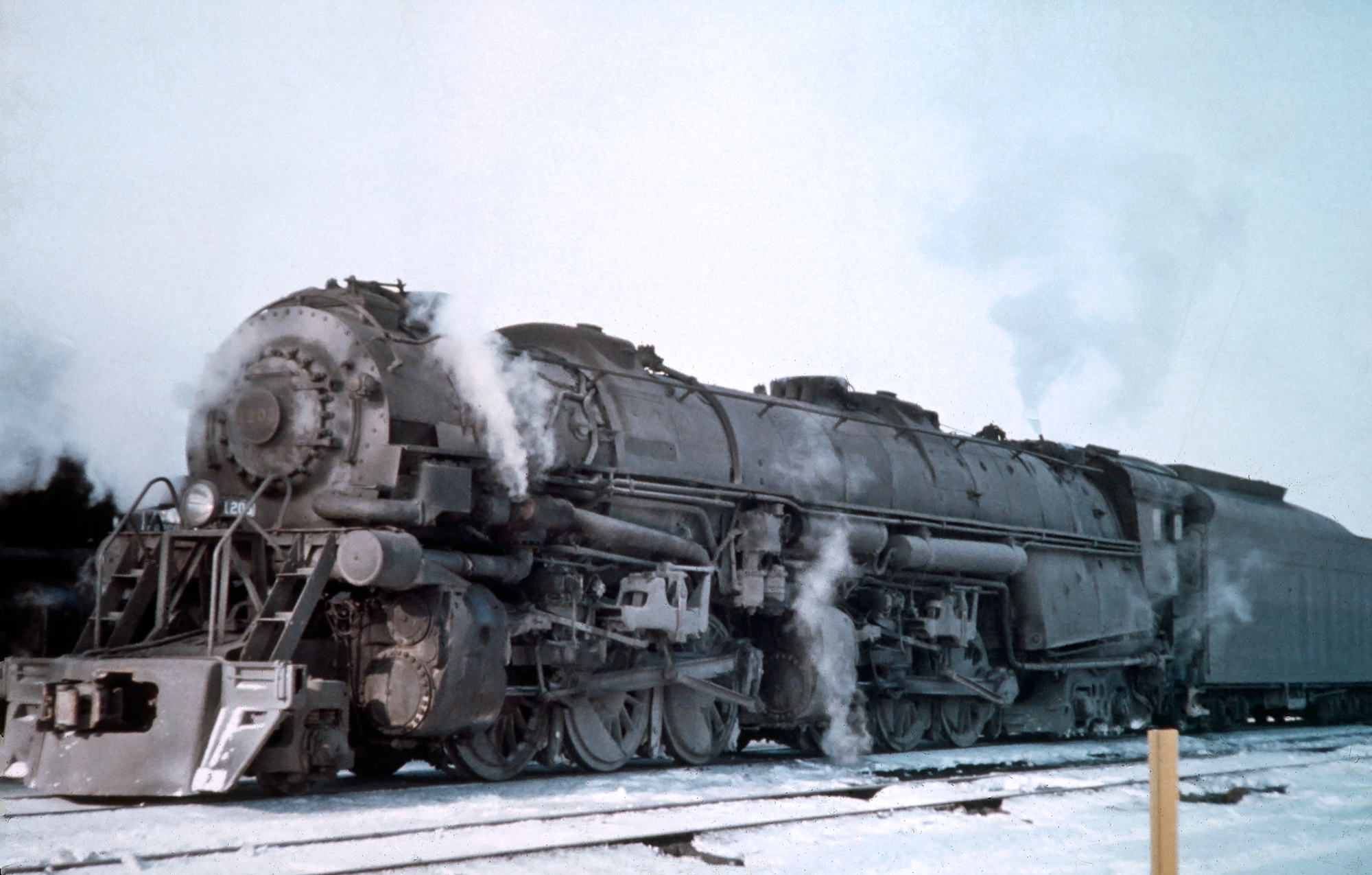 Norfolk & Western 2-6-6-4 #1203 at Crewe, Virginia, circa 1955. These fine locomotives were all produced at the N&W's Roanoke Shops and could handle passenger trains at speeds up to 70 mph. They were also regularly assigned to time freight service. Fred Byerly photo. American-Rails.com collection.

The 2-6-6-4 was another example in a growing trend of larger and more powerful locomotive designs.

By the 1930's railroads were looking for greater horsepower in moving increasingly heavier freight (and passenger) trains at higher speeds.  One way to accomplish this was by increasing the firebox's size; the idea was pioneered by the Lima Locomotive Works, which led to the fabled "Superpower" designs mentioned above.

The first 2-6-6-4s put into service were built by the Baldwin Locomotive Works in 1934 for the Pittsburgh & West Virginia, a small bridge line that ran from Connellsville, Pennsylvania, through Pittsburgh to Pittsburgh Junction, Ohio.

Interestingly, however, the railroad did not use theirs in high-speed freight service but instead they were normally assigned in slow drag service moving heavy trains over the P&WV's stiff grades.  Still, the success of the design proved to Baldwin that other roads would likely also find interest in the locomotive.

Curiously, of all the lines which may been interested in the 2-6-6-4 it was a southern system which purchased the wheel arrangement next.  A year after the P&WV acquired its first example the Seaboard Air Line went to Baldwin and ordered a small roster of five in 1935.

Two years later Seaboard went back to Baldwin for a secondary order, Class R-2 #2505-2509 that utilized Walschaert valve gear but for the most part were very similar to the R-1s.

According to the article, "Twin Stacks, 'Ready Boys?  I'm Going To Wind Her Up'" from the August 1979 issue of Trains the 2-6-6-4s were the largest steamers ever used by the Seaboard, whose earlier 2-8-8-2s were not very well liked and sold to the Baltimore & Ohio.

Along with the Clinchfield, the Seaboard was the only southern road to use this articulate wheel arrangement in the Deep South.  While the SAL's R-1s and R-2s might be considered less powerful than other versions of the design (such as the P&WV's or N&W's) they are often regarded as the first articulateds built for high-speed operation sporting 69-inch drivers.

Overall, the locomotives were said to be well-liked by SAL crews who were somewhat disappointed in having to operate the big steamers at slower speeds than they were capable of running.

After just a decade of service the Seaboard sold their fleet to the B&O, which reclassified them as KB-1/a and used them in fast-freight service along the eastern end of the Cumberland Division between Cumberland and Brunswick, Maryland where grades were relatively flat in the Potomac Valley.

The Norfolk & Western, of course, made the 2-6-6-4's famous when it began out-shopping its Class As in 1936 built in Roanoke, Virginia.  In all the N&W would roster forty-three examples, numbered 1200-1242, that were clearly the finest ever built.

Normally, the railroad used them along its Pocahontas Division in West Virginia as well as running through Portsmouth, Ohio and Columbus.  The locomotives remained in service until steam finally ended on the N&W in 1959.  Finally, of note was the 2-6-6-4 designed by Baldwin but never built for the Erie.