In simplistic terms, the 2-8-8-0 Consolidation Mallet was an extension of the common 2-8-0 Consolidation.  The first road to begin experimenting with the design was the Santa Fe in the early 20th century to create a more powerful, Mallet locomotive (a relatively new concept at the time).

The AT&SF wasn't particularly fond of their new creation and only rostered a few examples.  However, more than a half-dozen other railroads picked up on the wheel arrangement.

Some built their own while others collaborated with locomotive manufacturers to create a hefty steamer capable in either main line service or as helpers.

While the 2-8-8-0 was a relatively early Mallet several remained in regular service until the end of the steam era in the 1950s.  Sadly, no examples of this interesting design remain preserved today.

The wheel arrangement went by some interesting names on various railroads; the Kansas City Southern referred to theirs as "Big Mallies" while Union Pacific came up with the interesting title of "Bull Moose." 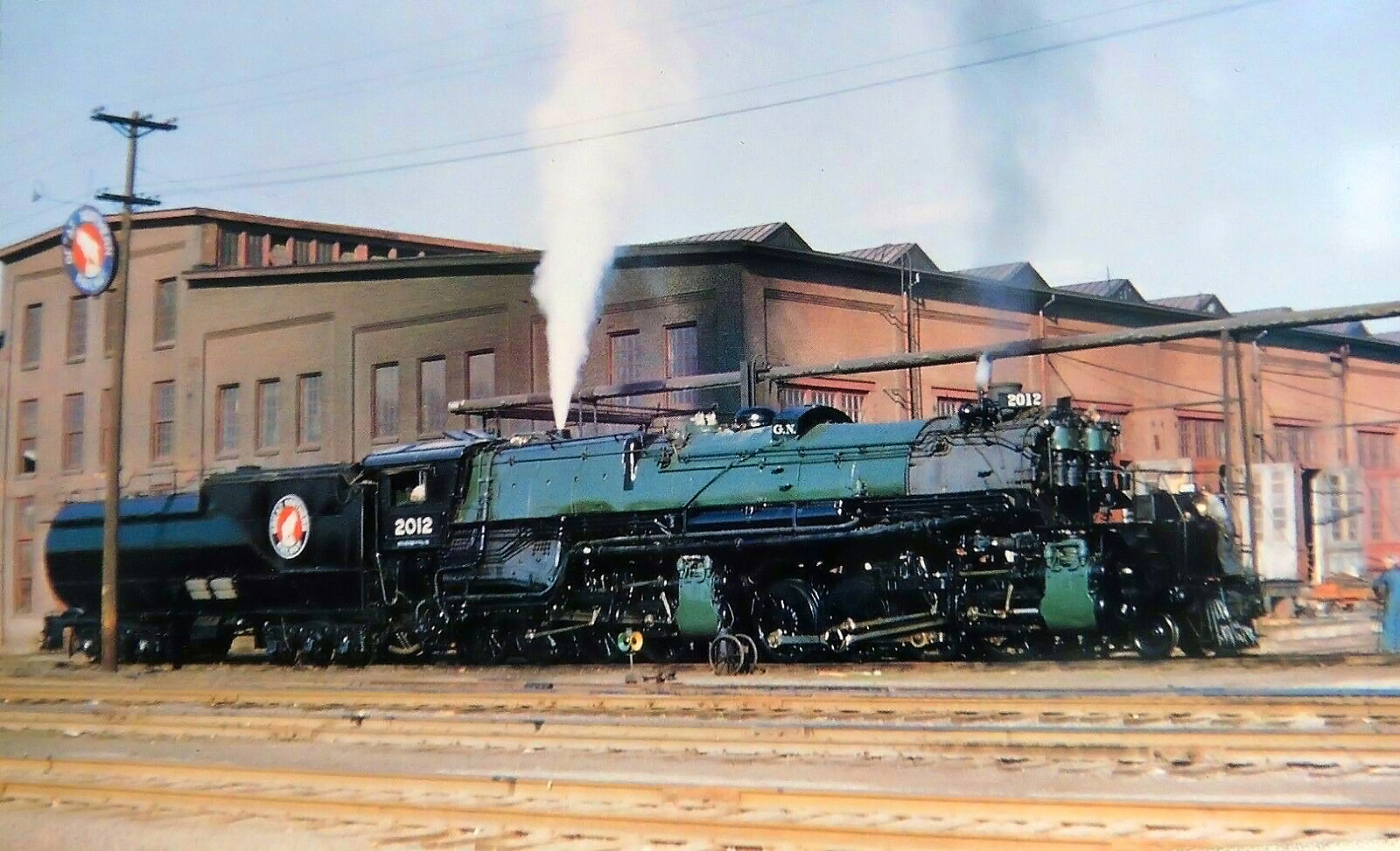 One of Great Northern's handsome 2-8-8-0 Consolidation Mallets, #2012 (N-3), is seen here on a September day in 1951 after just leaving the Hillyard Shops in Spokane, Washington before being transferred to the Minot Division. Built in 1940 by GN shop forces, she had previously worked the Inside Gateway on the Klamath Division between Bend, Oregon and Bieber, California where freight was interchanged with the Western Pacific. She could produce 4,200 horsepower, carried 63-inch drivers, and offered 104,200 pounds of tractive effort. Gayle Christen photo.

A Brief History Of The 2-8-8-0 Consolidation Mallet

The history of the 2-8-8-0 began in 1911 at the Sante Fe's Topeka, Kansas shops as one of the railroad's first such locomotives put into service.  The AT&SF thought that by basically smashing together a pair of standard 2-8-0 Consolidations a more powerful unit could be created.

What resulted was a design the Santa Fe called the Consolidation Mallet, a name that stuck in describing the wheel arrangement.  The first unit outshopped was #3296 but the unit encountered balancing issues and did not achieve a desired tractive effort rating.

The railroad went on to roster four examples in all (3296-3299) but was never particularly happy with the results.  According to SteamLocomotive.com after only a decade of service the units were rebuilt back into 2-8-0s around 1923.

Soon after the AT&SF's experimentation with the 2-8-8-0 the Great Northern received a batch of 25 Consolidation Mallets from Baldwin in 1912 numbered 2000-2024 and listed as Class N-1.

Here, the design found far more success as the GN was quite pleased with its examples as they received the nickname of "Bull Moose" for their ability to pull almost anything.

According to SteamLocomotive.com the GN's fleet of 2-8-8-0s utilized the Belpaire Firebox (only the Great Northern and Pennsylvania used this firebox in wide-scale use within its steam fleet) and offered tractive efforts that exceeded 98,000 pounds.

After only a decade of service the original compound locomotives were simpled in 1925 boosting their boilers to 240 psi and offering tractive efforts exceeding 100,000 pounds. 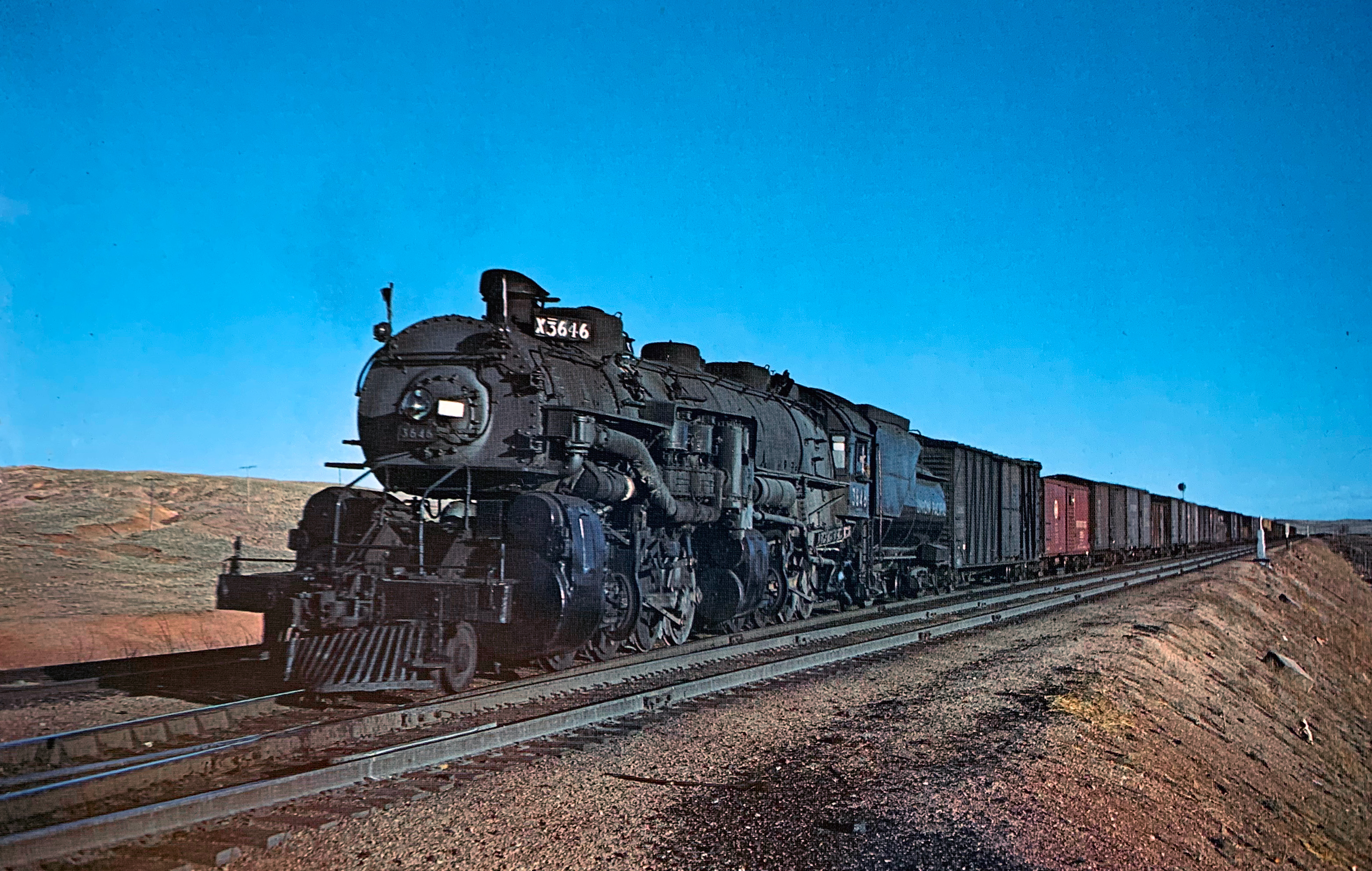 A Union Pacific publicity photo featuring 2-8-8-0 "Bull Moose" #3646 with a freight extra on Wyoming's Sherman Hill (between Cheyenne and Laramie) during the early 1940's. The 2-8-8-0's were built as Mallet's but later converted to simple expansion between 1936-1944. Author's collection.

The GN continued to refine their fleet of Consolidation Mallets, overhauling the units in 1940 with, among other improvements, roller bearings and a boiler rating of 265 psi.

The more powerful 2-8-8-0s were used in both passenger and freight service where they were well liked.  As it turns out the Union Pacific was another system quite fond of the 2-8-8-0 and also referred to its fleet using the "Bull Moose" designation.

The railroad went on to roster 70 of these Mallets either built by its own shops or manufactured by the American Locomotive Company (Alco) and first went into service in 1918.

Listed as Class MC by the UP the locomotives were upgraded twice during their service lives, in 1924 and 1937 (where tractive efforts reached more than 100,000 pounds), and primarily operated as helpers over the stiff grades of the Wyoming Division.

The only eastern line to use the 2-8-8-0 design in large numbers was the Baltimore & Ohio, which first put its Class EL-1s into service during 1916.  This fleet of 70 was built by the Baldwin Locomotive Works and the B&O intended them for use over the mountainous West End of the Cumberland Division tackling Cranberry Grade and other stiff sections of the route.

Like the Union Pacific and Great Northern, the B&O was very fond of its Consolidation Mallets where it found the locomotives quite suitable as helpers in drag service with tractive efforts over 110,000 pounds (after they were overhauled).

In all, the railroad rostered seven different classes of Consolidation Mallets (EL-1, EL-2/a, EL-3/a, EL-5/a, and EL-6a) with the "a" designation referring to the units being rebuilt from compound to simple operation.

The 2-8-8-0s proved so useful on the B&O that they remained in service through the mid-1950s, essentially until the end of the steam era.  The three other roads to operate the 2-8-8-0 included the Utah Railway, Pennsylvania (which rostered only a single unit it built at its Juniata Shops in 1919, #3700), and Kansas City Southern.

The locomotives remained in regular service until after 1950.  Finally, the Utah had a fleet of three it purchased from Baldwin in 1920, #200-202, that the railroad also liked very well and used them in heavy coal drag service until the 1950s.