The Silver Star was a late addition to the Seaboard Air Line's fleet, inaugurated more than two years after World War II.

The train was more or less a renamed section of the flagship, Silver Meteor, and carried a similar routing from New York to Florida in conjunction with the Pennsylvania and Richmond, Fredericksburg & Potomac.

It was always considered secondary in nature to the Meteor and for a number of years continued hosting heavyweight equipment.

Over the years the Star's consist changed here and there but normally ran with at least eight cars even in the "off season" (roughly April through late fall).

The Seaboard Air Line was one of two railroads which served America's east coast region from Richmond, Virginia to Florida.

The other was the Atlantic Coast Line, which extended as far west as Montgomery and Birmingham, Alabama (as too did the SAL).  Both companies were well-managed operations until their 1967 merger forming Seaboard Coast Line. 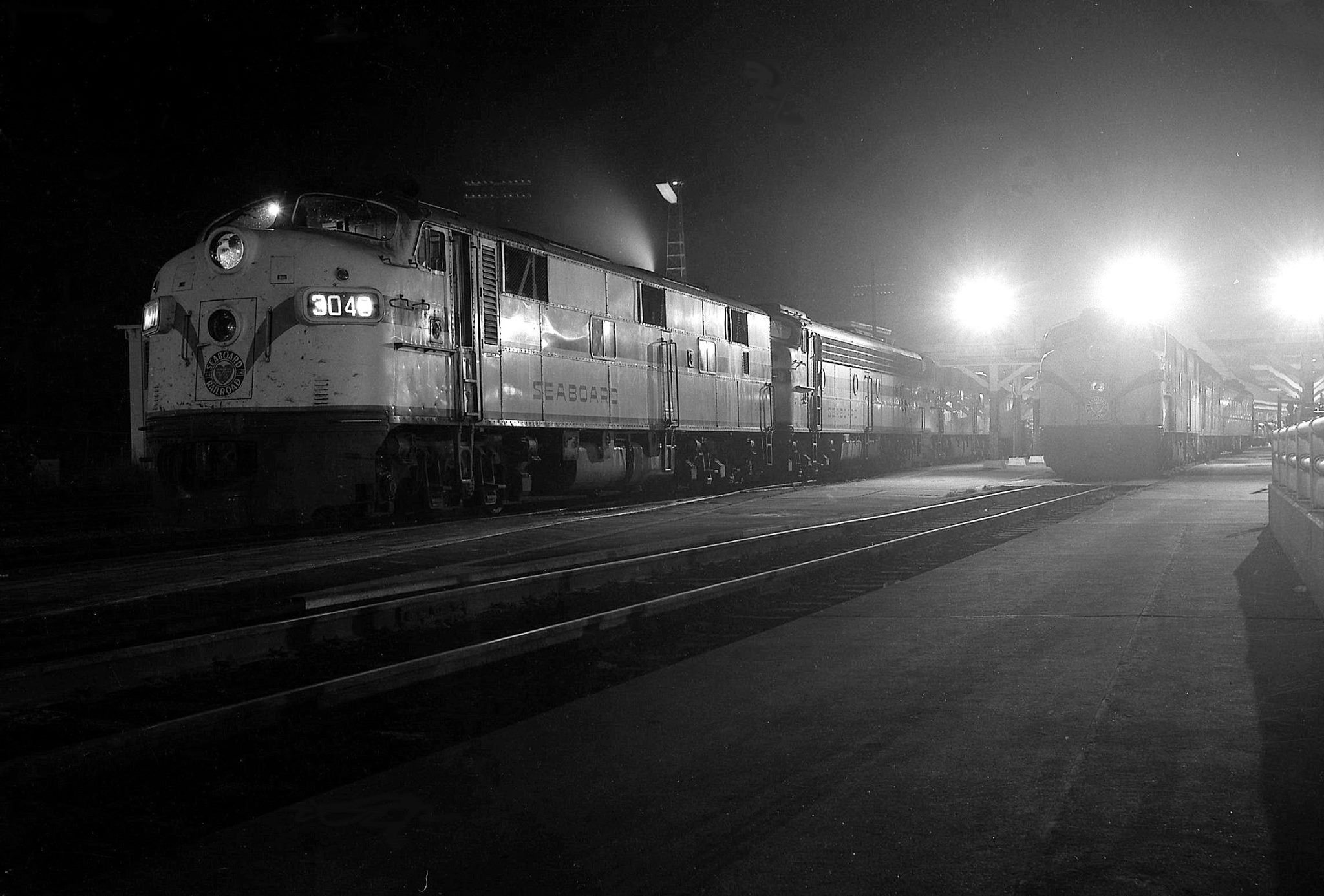 Seaboard Air Line E7A #3049 is ahead of train #21, the southbound "Silver Star," stopped at Raleigh, North Carolina at around 7:10 PM while a short train #17, the southbound "Tidewater," can be seen on the next track over. Warren Calloway photo.

The Silver Star was certainly regarded by the Seaboard as its secondary streamliner serving the Sunshine State.  When inaugurated on December 12, 1947 it was nearly a decade behind behind flagship Silver Meteor, the South's first lightweight train launched on February 2, 1939.

According to Larry Goolsby's book, "Seaboard Air Line Passenger Service, In The Streamlined Era" the railroad held a naming contest for the train where more than 1,000 individuals submitted entries.

Ultimately, the name Silver Star was chosen, which acquired the equipment and corridor of what was formerly the Advance Silver Meteor.  During its early years the new train carried a number of heavyweight equipment, some which were rebuilt and modernized in nature to carry a look of gleaming stainless-steel.

Its consist normally included a mix of sleepers, a diner, standard coaches, lounge, tavern-coach, and a coach-observation.

Of course, this was normally dependent on the time of year; during the off-season (summer) the Star carried far fewer cars (usually no more than 8 or 9) and some equipment was not always running (observations, for example).

The train would depart from Pennsylvania Station in New York around 9:30 AM each morning and arrive in Jacksonville, Florida at 4 AM the following day; from there sections split reaching Miami (before noon) and St. Petersburg (11:00 AM).

The returning northbound train left St. Petersburg and Miami at mid-afternoon and arrived in Jacksonville during late evening around 9 PM.  The Star would then return to New York the next day just prior to 5 PM.

Interestingly, as the years passed this schedule did not change considerably, holding roughly within a half-hour from its 1947 inauguration through the Seaboard Coast Line era.

By the fall of 1949 the Silver Star could boast a nearly all-lightweight trainset thanks to the arrival of new sleepers from the Budd Company.

A 1952 consist of the "Silver Star." Author's collection.

A 1958 consist of the "Silver Star." Author's collection.

These locomotives were originally painted in Seaboard's beautiful Citrus livery and photographs show them leading Silver fleet sections throughout the state of Florida.  In once instance, a company photograph depicts Centipede #4500 up front on the Silver Meteor for a publicity scene.

Aside from the Baldwins, SAL also owned a batch of Alco RSC2s and RSC3s that were equipped with steam boilers for passenger assignments.

Due to the Star's late addition to the schedule it was behind steam (on occasion) for only a few years, usually Class M 4-8-2s or Class P 4-6-2s.  By 1950, however, they had largely been retired after enough new diesels had arrived.

Over the years the Silver Star saw its consist change over the years depending on need.  At one point the train was discontinued entirely between the spring and late summer of 1948 but returned, permanently, by that August.

Mr. Goolsby's notes in his book that the Star normally only offered a west coast section (St. Petersburg) during the busy winter seasons and its consist could reach as many as a dozen and a half cars during this time .

During the mid-1950s it received a handed-down, lightweight tavern-lounge observation from the Silver Comet, which replaced its long-running coach-observation.

Another feature that clearly distinguished the Star from the Meteor was the significant mail/express cars it carried, the latter of which ran with almost no such head-end equipment aside from an RPO.

Through the 1960s Seaboard still boasted strong ridership on its Floridian trains and they regularly continued to run with more than a dozen cars during the winter seasons.

The Star was one of only a handful of former Seaboard trains retained after the Seaboard Coast Line merger, formed with Atlantic Coast Line in 1967.

The train's 1969 timetable notes that its consist included:

The Star made its final run under the SCL on April 30, 1971.  Today , it remains within Amtrak's fleet but with services only a far cry from those under the SCL and Seaboard.