The GP9 series, like its sister GP7, would find enormous success and even eclipse the GP7 in terms of sales to become one of the most successful diesel locomotives ever built.

Following the tremendous sales performance of the GP7, the series affectionately became known as “Geeps,” and the GP9 simply followed in that success.

Until the release of the GP7 EMD was lagging far behind the other locomotive builders, particularly the American Locomotive Company (Alco) and its early RS models.

However, the model instantly propelled EMD as the industry leader of road switchers (along with virtually every other model type) and it only reaffirmed its dominance with the GP9.

In just five years of production the model amazingly sold more than 3,500 examples (including B units), nearly a 32% net increase in sales!

Together the two models, aside from the SD40 series, are likely the best selling of all time, combining for over 6,000 units built when production ended on the GP9 in 1959. 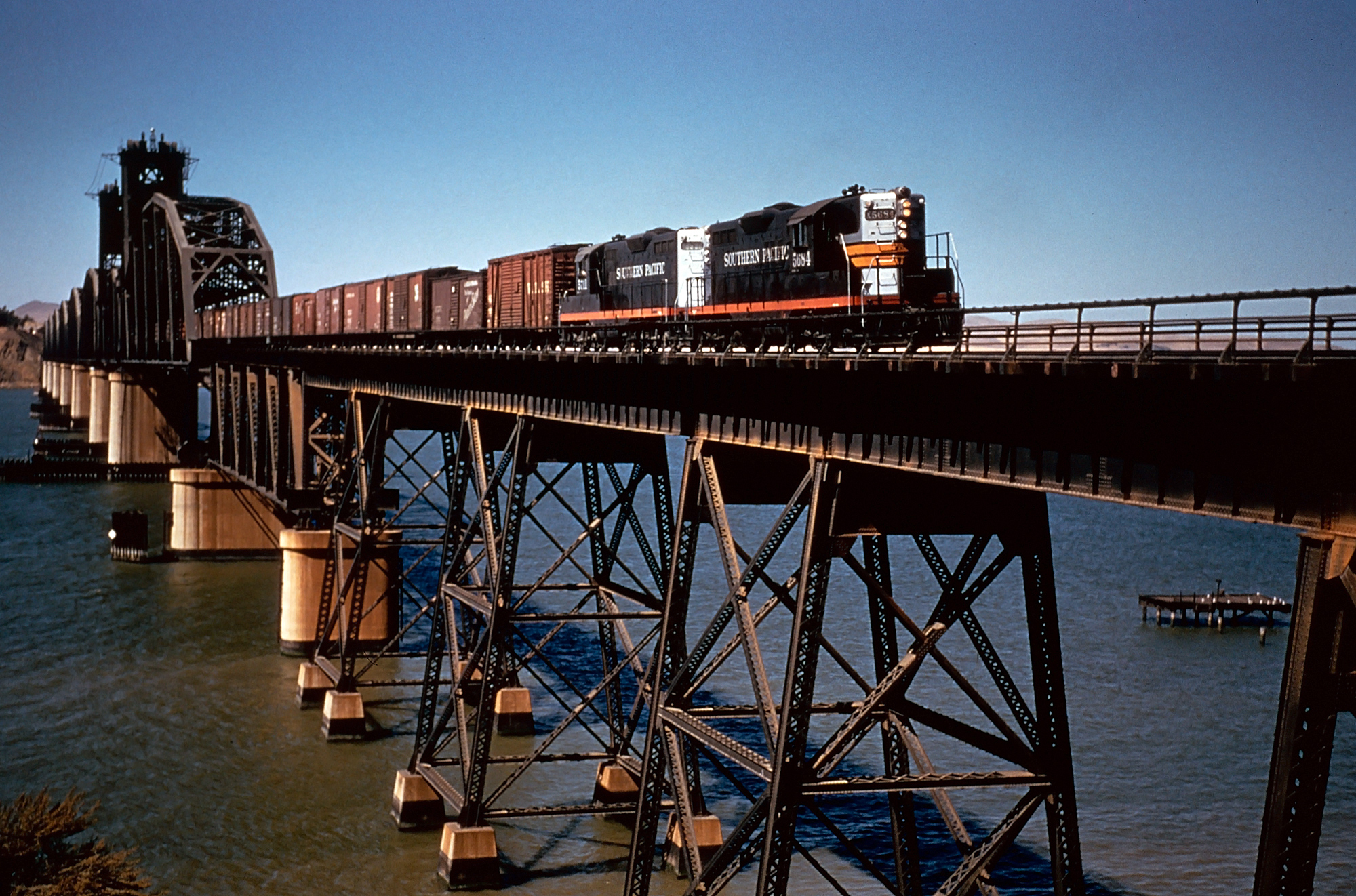 A pair of Southern Pacific GP9's, #5684 and #5711, lead a westbound/southbound freight over the big lift bridge spanning the Carquinez Strait near Martinez, California circa 1956. Gordon Glattenberg photo. American-Rails.com collection.

Today, hundreds of GP9s remain either in operation on shortlines or in use aboard a tourist railroad. Others remain preserved at various museums and historical societies.

The EMD GP9 began production in January, 1954 about five months before the GP7 was no longer offered in the builder's catalog.

The GP9 looked almost identical to its predecessor but there were some key difference in the two.

For EMD, the success of the GP7 had to surprise the company to some extent considering its lack of competing road switcher model at such a late date and more than eight years since the American Locomotive first released its RS1 model in 1941, just before the outbreak of World War I.

In a sense, EMD was poised to be successful in the road switcher market, even despite the failed BL2 design of 1948. 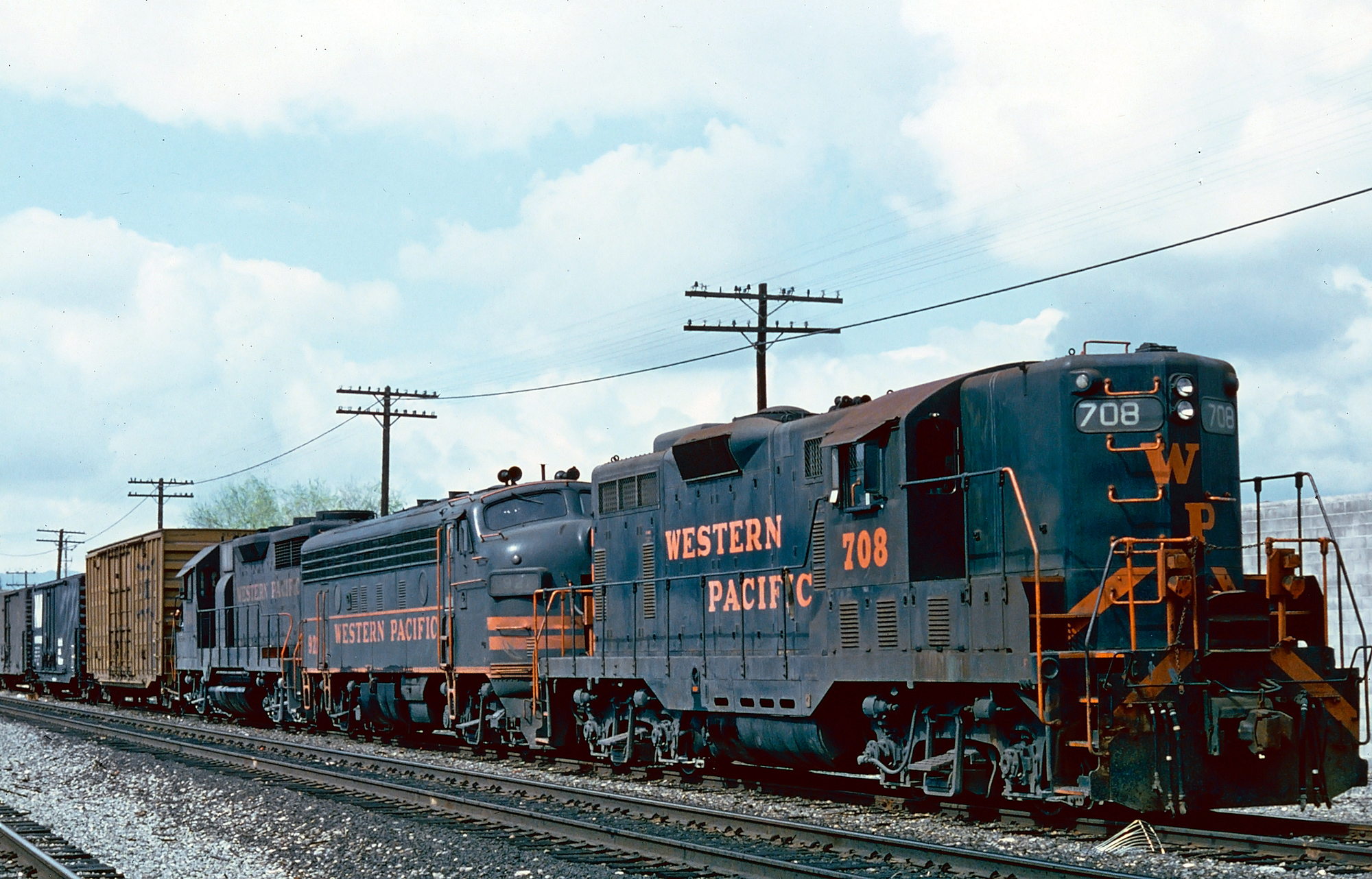 Western Pacific GP9 #708, F7A #921, and a GP40 appear to be tied down with their train at Milpitas, California, circa 1979. Mike Bledsoe photo. American-Rails.com collection.

Its locomotives were reliable, easy to maintain, and efficient. Once again, it was EMD's chief engineer Richard "Dick" Dilworth who laid out the general design of the GP7, and the company's styling department headed by John Markestein put the finishing touches on the new model.

As for the GP9 it carried the standard carbody appearance of the former but offered new features. First was the latest version of the company's prime mover, the 567C.

It also offered a new traction motor, the model D37 although tractive effort ratings remained the same; 65,000 pounds starting and 40,000 pounds continuous. The GP9 also weighed slightly less at just 120 tons while increasing its length to just over 56 feet.. 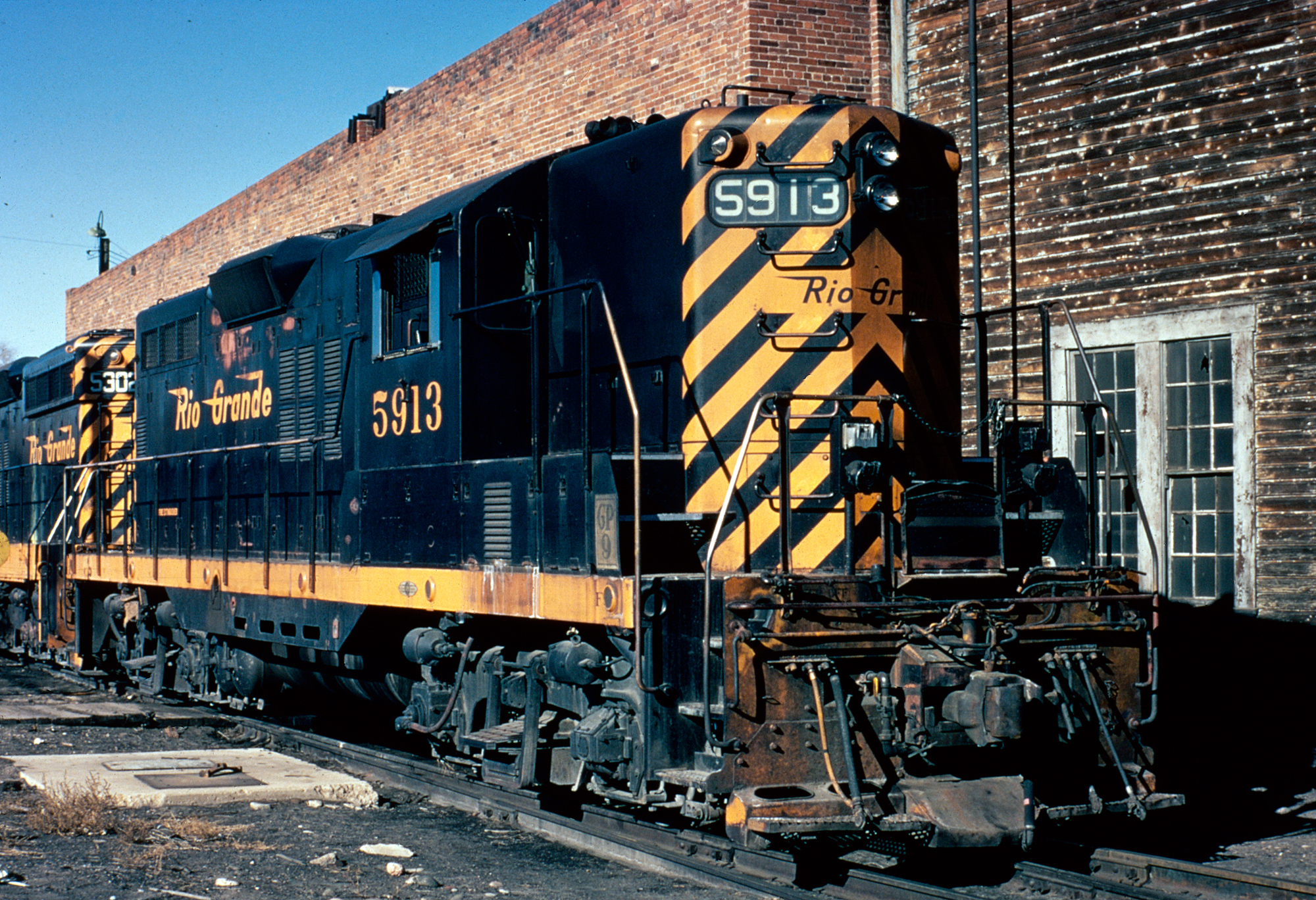 Rio Grande GP9 #5913 lays over with other power next to the roundhouse in Pueblo, Colorado during the 1970s. American-Rails.com collection.

Those differences aside the GP9 looked very similar to the GP7. Through 1959 the model sold an astonishing 3,449 units, which is even more surprising when one realizes that the GP7 sold 2,600+ itself!

While the GP7 is credited with completing main line dieselization perhaps the GP9 is best credited with finishing off the remaining steam in America (an exception would be the Norfolk & Western, which held out on scrapping its steam fleet until the late 1950s).

And this is one reason for the locomotive's astronomically high sales numbers. Not only was it a practical, useful, and reliable model like the GP7 but it also helped those lines that had to fully dieselize do so 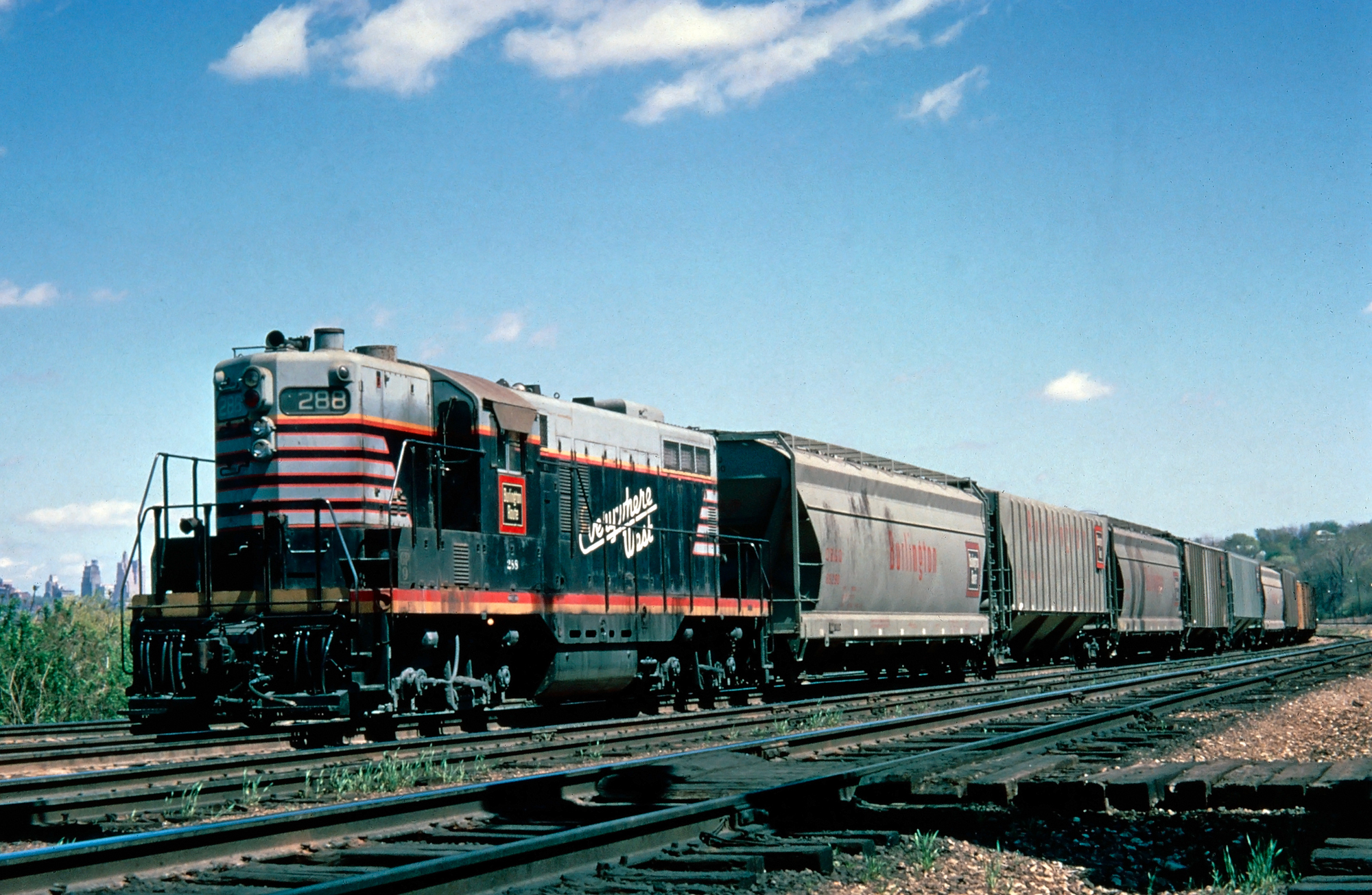 Not surprisingly, with the success of the GP9 and GP7 series the units could be found on all types of railroads (both large and small) and in all types of service (main lines, spurs, branch lines, yards, etc.).

Of course, the 3,400+ units listed above includes only those U.S. companies that bought the GP9. Since 1949 EMD had established its Canadian division, General Motors Diesel (GMD) that saw a few hundred sales of the GP7 just after opened although sales really took off for the GP9. 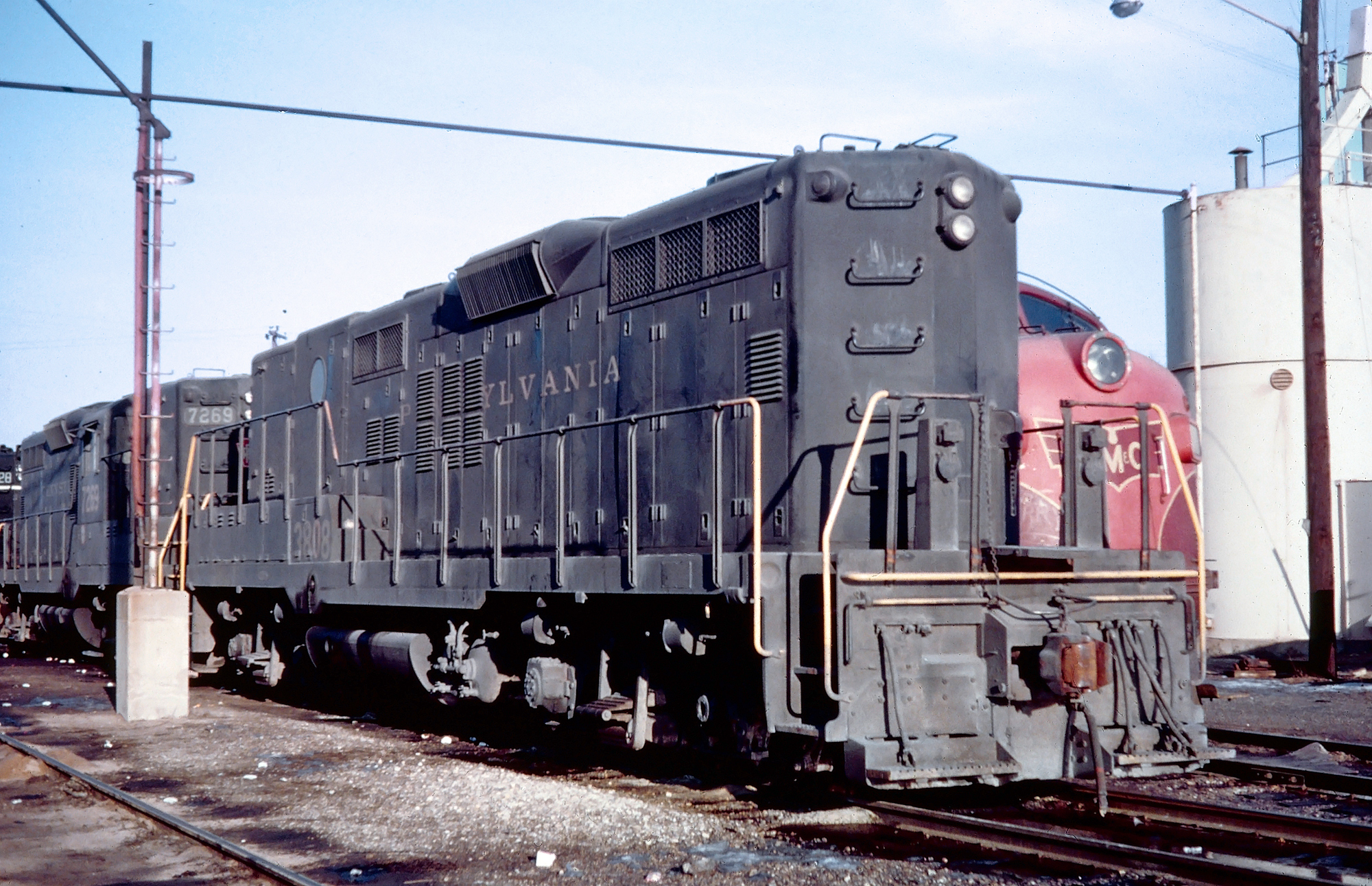 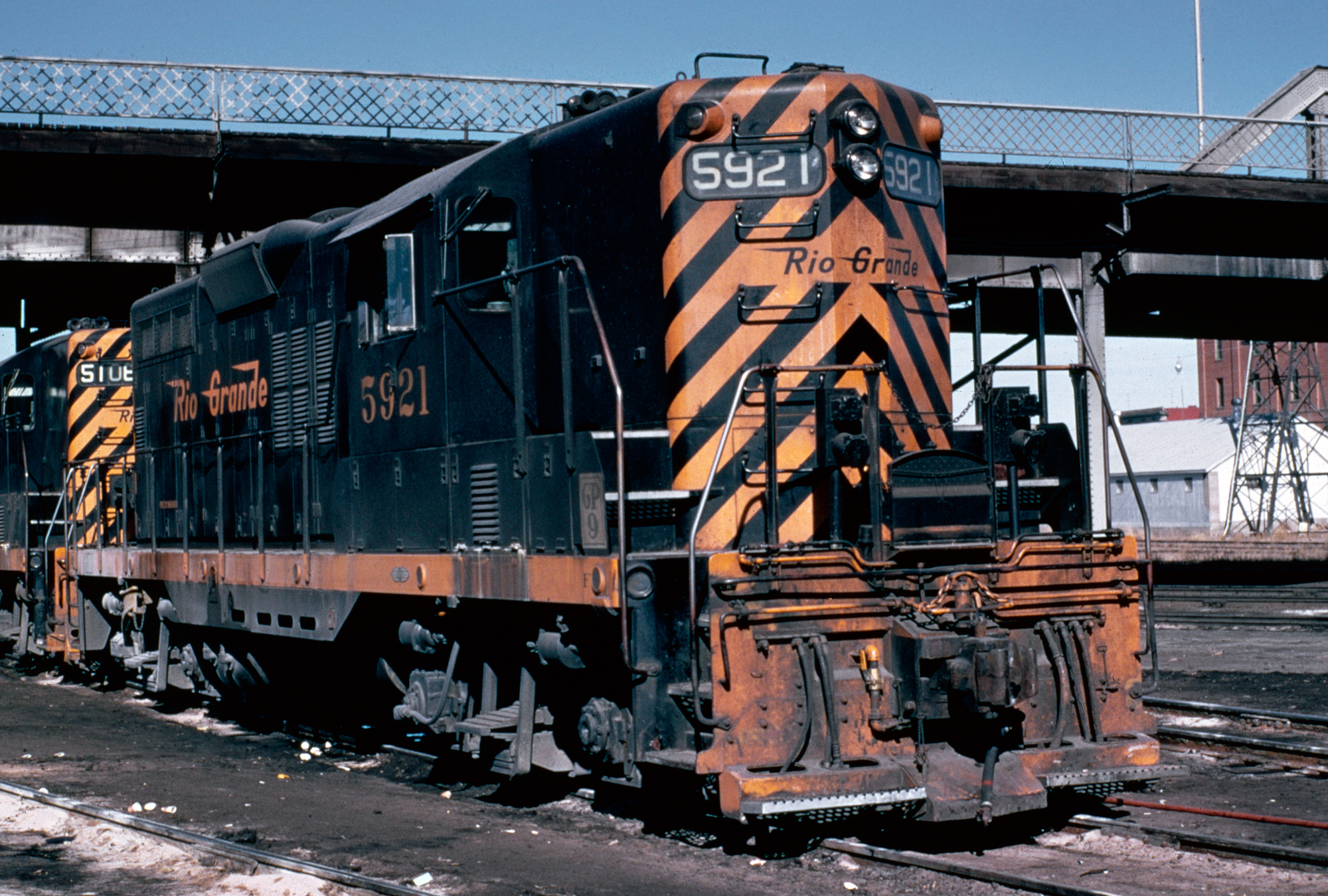 It should also be noted that there were buyers for the GP9B although it sold very like like with the GP7B; the Pennsylvania Railroad bought 40 while Union Pacific purchased 125.

The units’ extreme versatility is, of course, what made them so successful, and many continue to be found today in freight service on both short lines and regionals (as well as museums and tourist lines).

Spotting them, however, can be a bit tough, as most have been rebuilt at some point in the last 50 years, sometimes altering their looks a bit.

Be on the lookout, however, and you can find them! The GP7 and GP9 models were only the beginning of the series and later four-axle, as well as six-axle, models would follow.