The Wabash is another of the many smaller, classic railroads whose passenger operations are sometimes lost or forgotten due to the surrounding larger competition that widely marketed their trains.

However, the Wabash not only offered a particularly well-known train but also one that was fairly successful, the Blue Bird (which should not be confused with the Nickel Plate Road’s noted blue and white livery dubbed the “Bluebird”).

While the regional streamliner was one of the last unveiled to serve Chicago-St. Louis it proved to be one of the more successful, eventually operating nearly a half-dozen dome cars!

After the Wabash was acquired by Norfolk & Western in 1964 the train remained on the railroad's timetable until Amtrak launched on May 1, 1971. 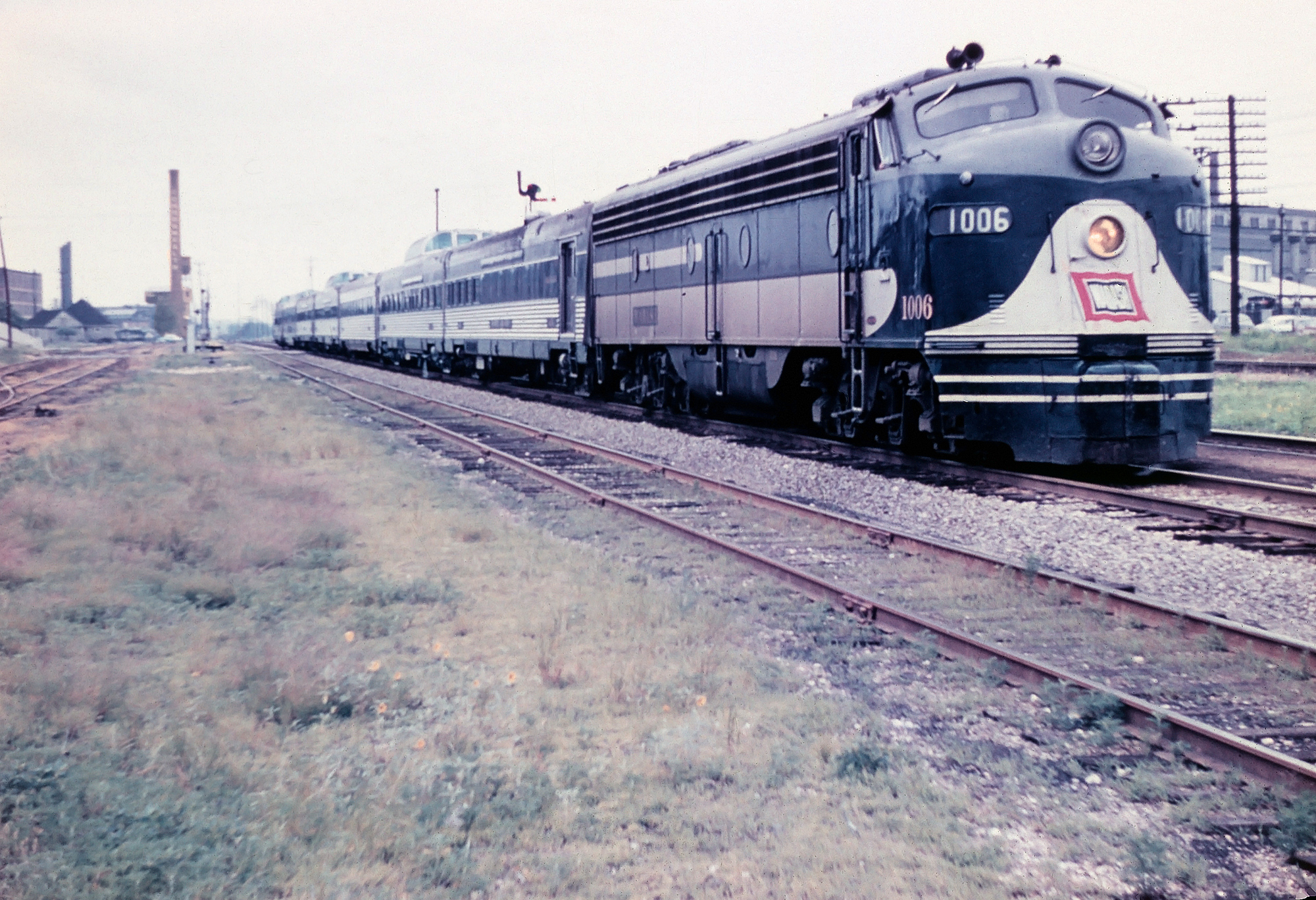 Wabash E8A #1006 is just out of St. Louis with train #24, the eastbound/northbound "Blue Bird," at Granite City, Illinois on the morning of June 22, 1957. American-Rails.com collection.

While the Wabash was never a large carrier its legendary status far surpasses its size. The railroad was a Midwestern system connecting Buffalo with cities such as Chicago, Detroit, St. Louis, Kansas City and Omaha.

At its peak it was only a little over 2,000 miles in length but its bridge line status, markets served, and high speed freight service made it quite successful, especially in its later years.

Eventually the Wabash was swept up in the merger mania beginning in the late 1950s and after a long stint under Pennsylvania Railroad ownership it eventually became part of the sprawling, and growing, Norfolk & Western system in the 1960s.

A 1952 consist of the "Blue Bird" and Wabash's other top trains. Author's collection.

The Wabash never had an extensive passenger fleet although it did provide high-quality service with names like the Banner Blue Limited and Midnight Special. Perhaps most legendary, however, was the Wabash Cannon Ball, which operated between Detroit and St. Louis.

The irony here is that this train began as a fictional name, which became popular in the American folk song first credited to J. A. Roff in 1882 entitled "The Great Rock Island Route."

Over the years the legend of this train endured to the point the Wabash renamed its daytime train between Detroit - St. Louis as the Wabash Cannon Ball.

Even more incredible is the fact the train remained so popular that it survived right up until Amtrak in 1971 after the N&W initially attempted to discontinue it in the 1960s.

The Blue Bird was the Wabash’s late entrance into the streamliner revolution, with the railroad debuting the St. Louis-Chicago train on February 26, 1950.

Prior to its launching the railroad had long been known for providing quality service among a long list of named trains such as the St. Louis Limited, Detroit Special, Pacific Coast Limited, Kansas City Express, St. Louis Special, Chicago Arrow, and Red Bird.

The Wabash apparently wasn't particularly attracted to the pizazz of the streamliner movement prior to World War II; its first such lightweight train was Union Pacific's City of St. Louis, which began using the Wabash between Kansas City and St. Louis in 1946.

The railroad's first streamliner of its own was the City of Kansas City introduced a year later running between the same cities. 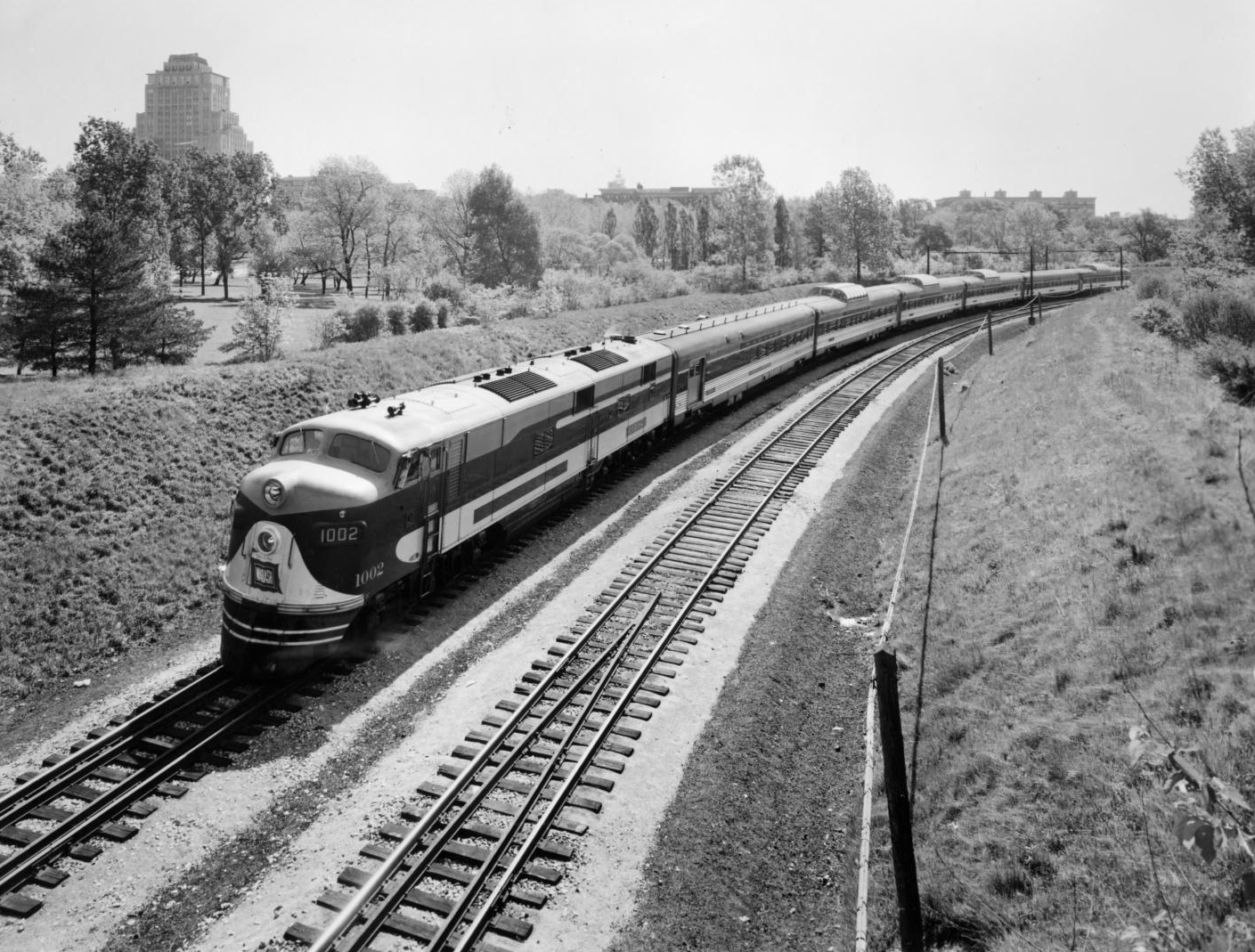 A company photo of the "Blue Bird" seen here outside of St. Louis during the 1950s led by E7A #1002. In this scene you can clearly see the six-car consist as well as the four domes the train carried.

The uniqueness of the Blue Bird, a factor that ultimately made it very successful, was the use of four Budd-built Vista-Dome cars including three coaches and a parlor-lounge.

To keep up with demand the Wabash eventually purchased a fifth dome-lounge, which featured the famous "Blue Bird Room." 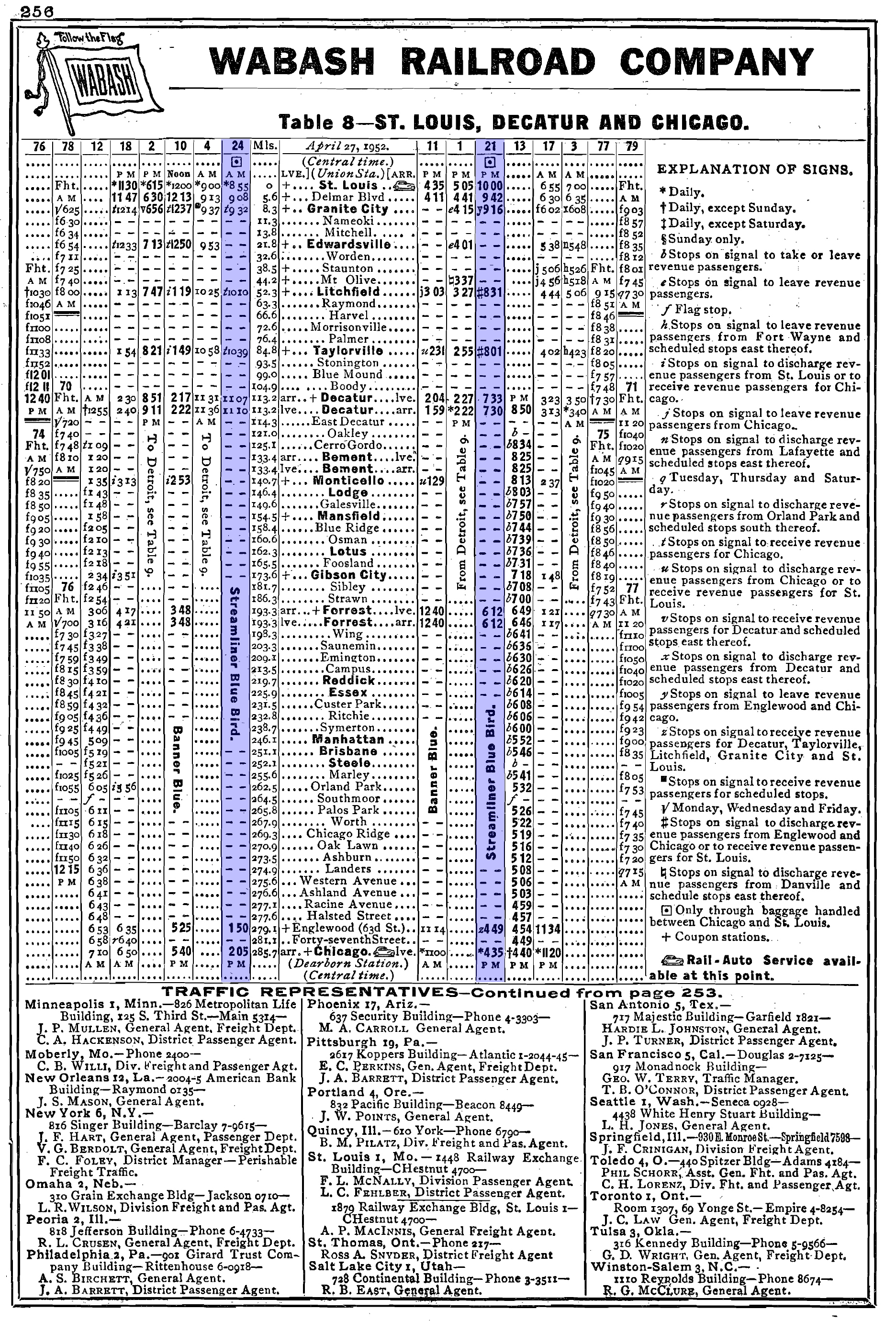 This dome along with the train's other consist, a baggage-lunch counter-lounge, and diner lounge were all built by Pullman-Standard. For power the train featured E7A diesel locomotives from Electro-Motive and later also acquired a large batch of the builder's upgraded E8 model.

An interesting aspect of the train's success can almost certainly be attributed to the use of those domes as, according to Mike Schafer and Joe Welsh's book Streamliners:  History Of A Railroad Icon, the Wabash's "...route between Chicago and St. Louis traversed some of the flattest countryside in all of Mid-America."

For a regional operation, the train was very stylish featuring a striking livery of dark blue and gray in conjunction with the stainless steel of the Budd cars (which also sported the blue and gray paint). The interior of the train was just as elegant and classy with various blues used throughout.

While the Illinois Central is often credited with offering some of the finest passenger operations in the Midwest the Wabash actually did quite well competing against it between Chicago and St. Louis.

The train made a round trip each day between the two cities and had a sister train, the Banner Blue, which carried out daytime services (until 1960 it normally operated with heavyweight equipment).

According to the railroad's official 1950 timetable Trains #24 (northbound) and #21 (southbound) could make the run between the two cities in just over 5 hours carrying an average train speed around 55 mph.

The Blue Bird became so popular the railroad was forced to add an additional dome-parlor to meet demand for first-class service.  Interestingly, the Wabash’s trains outlived their owner.

In 1964 the railroad became part of the Norfolk & Western, which, not known for extensive passenger operations itself, was disinterested in continuing most Wabash’s services.

As a result, much of the railroad's passenger equipment was used on other N&W trains, although a semblance of the Blue Bird remained on the schedule after the merger.

In 1968, the train was cutback to Decatur, Illinois and renamed the City of Decatur. It remained on N&W's timetable until the end, when Amtrak took over intercity passenger rail operations on May 1, 1971.