While the Empire Builder may have been the al le crème of Pacific Northwest passenger services, the NCL was certainly a close second.

However, with demand in rail travel waning, the railroad three in the towel early, bowing out of the Pacific Northwest market in 1961, ten years before Amtrak.

The NCL was one of the oldest named passenger trains in the country before it was discontinued on April 30, 1971.

The following day Amtrak acquired most intercity passenger services and elected not to continue the North Coast Limited (for a time the carrier did operate a similar service, the North Coast Hiawatha). 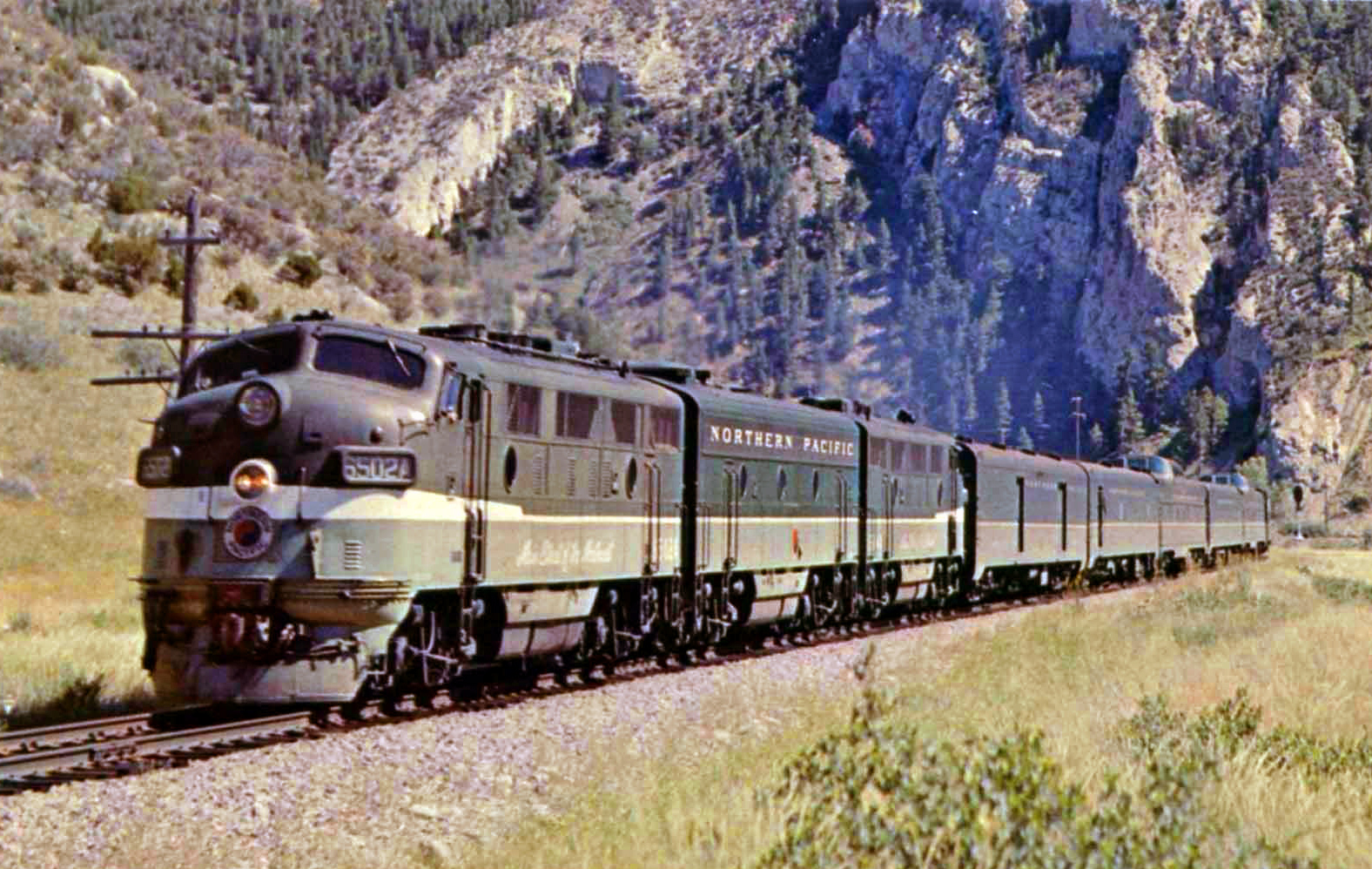 Northern Pacific's flagship "North Coast Limited," hustles westbound through Montana's Jefferson River Canyon led by F3A #6502-A. Note that an ABS signal guarding Milwaukee Road's Pacific Extension can be seen in the background. The two railroads followed each other closely along this stretch of the river. Author's collection

The Northern Pacific was the first of the three major Pacific Northwest to be completed.

Construction began seven years later, in 1870, and would roughly follow the expedition of Lewis and Clark who originally chartered the western territory in the early 19th century. 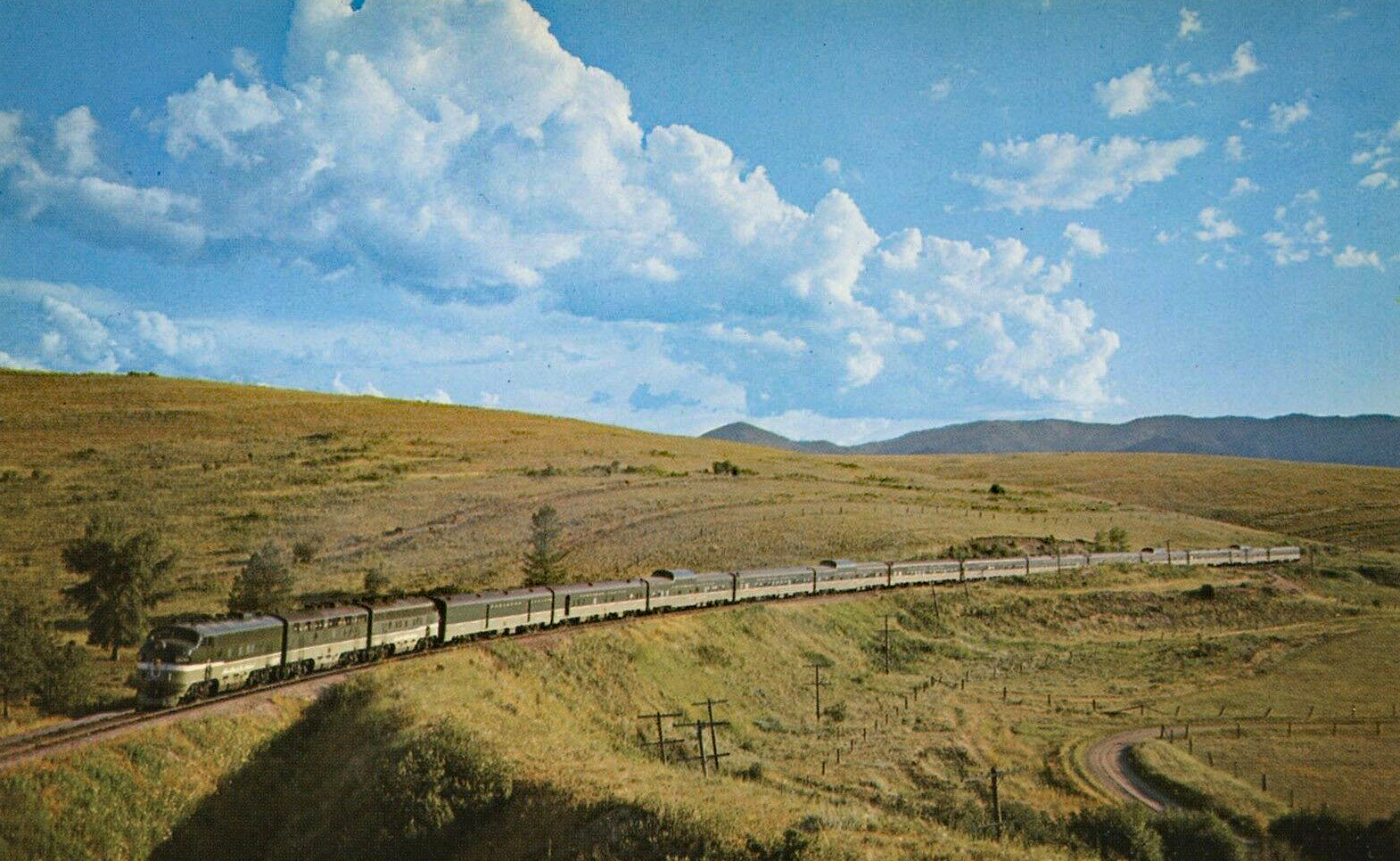 A Northern Pacific publicity photo of train #25, the westbound "North Coast Limited," climbing out of Missoula, Montana during the 1960's. Author's collection.

While the NCL was always the Northern Pacific’s flagship train between Chicago and Seattle, the train truly came of age in the streamliner era.

In 1944 the railroad placed a large order from Pullman-Standard for lightweight, streamlined equipment worth a staggering $65 million. 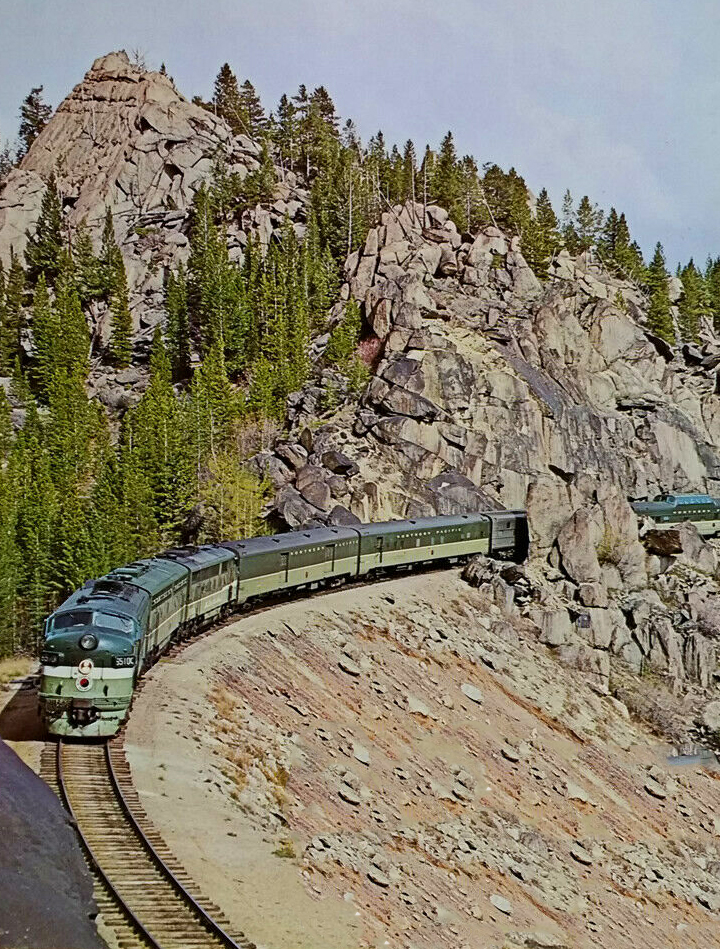 The train was given a stunning livery designed by Raymond Loewy of two-tone green and white trim.  Inside, the train played on regional themes with breathtaking scenery of the Cascades and Northern Plains.

These images were further enhanced by the panoramic views afforded by the Vista-Dome cars, which arrived in the fall of 1954. 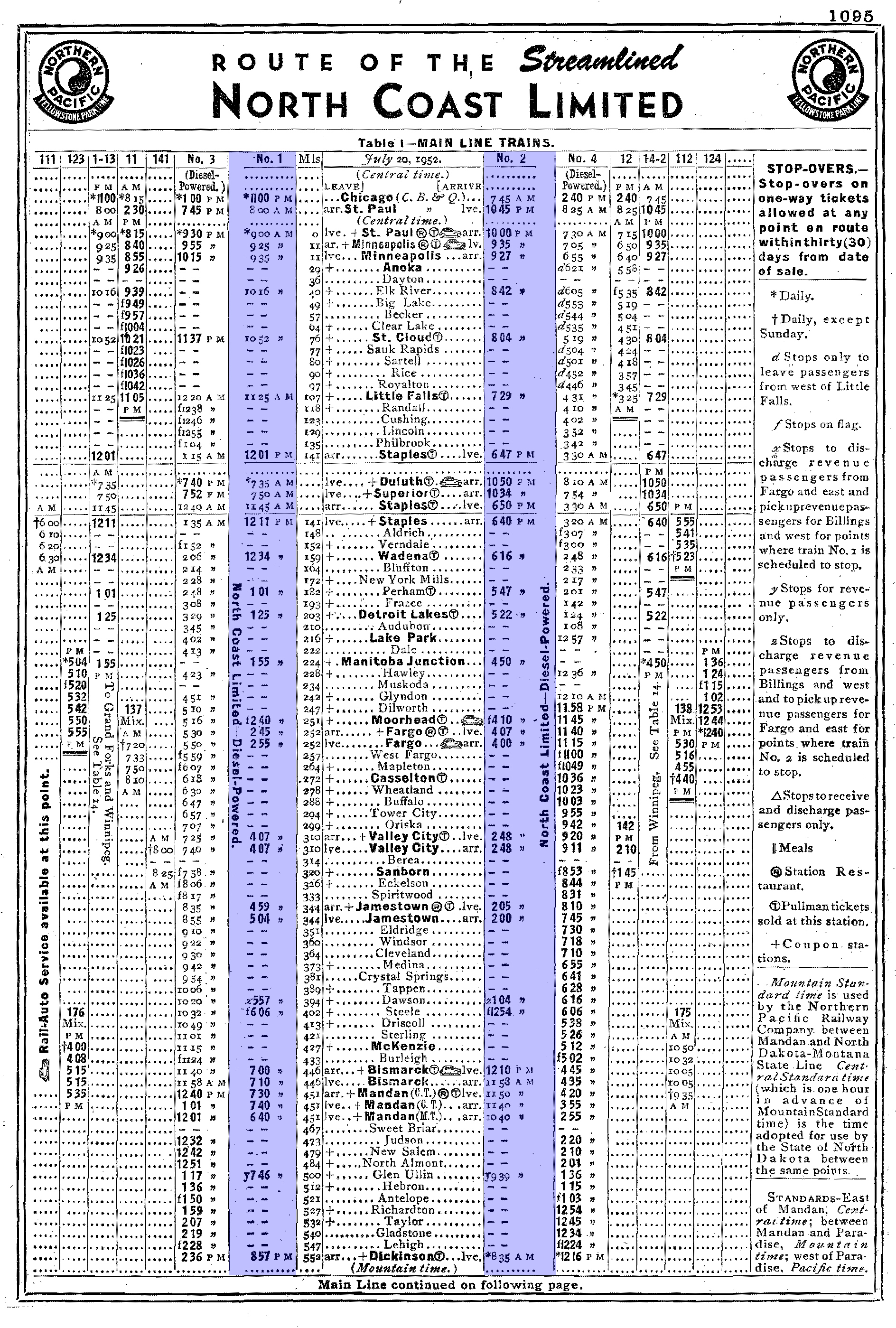 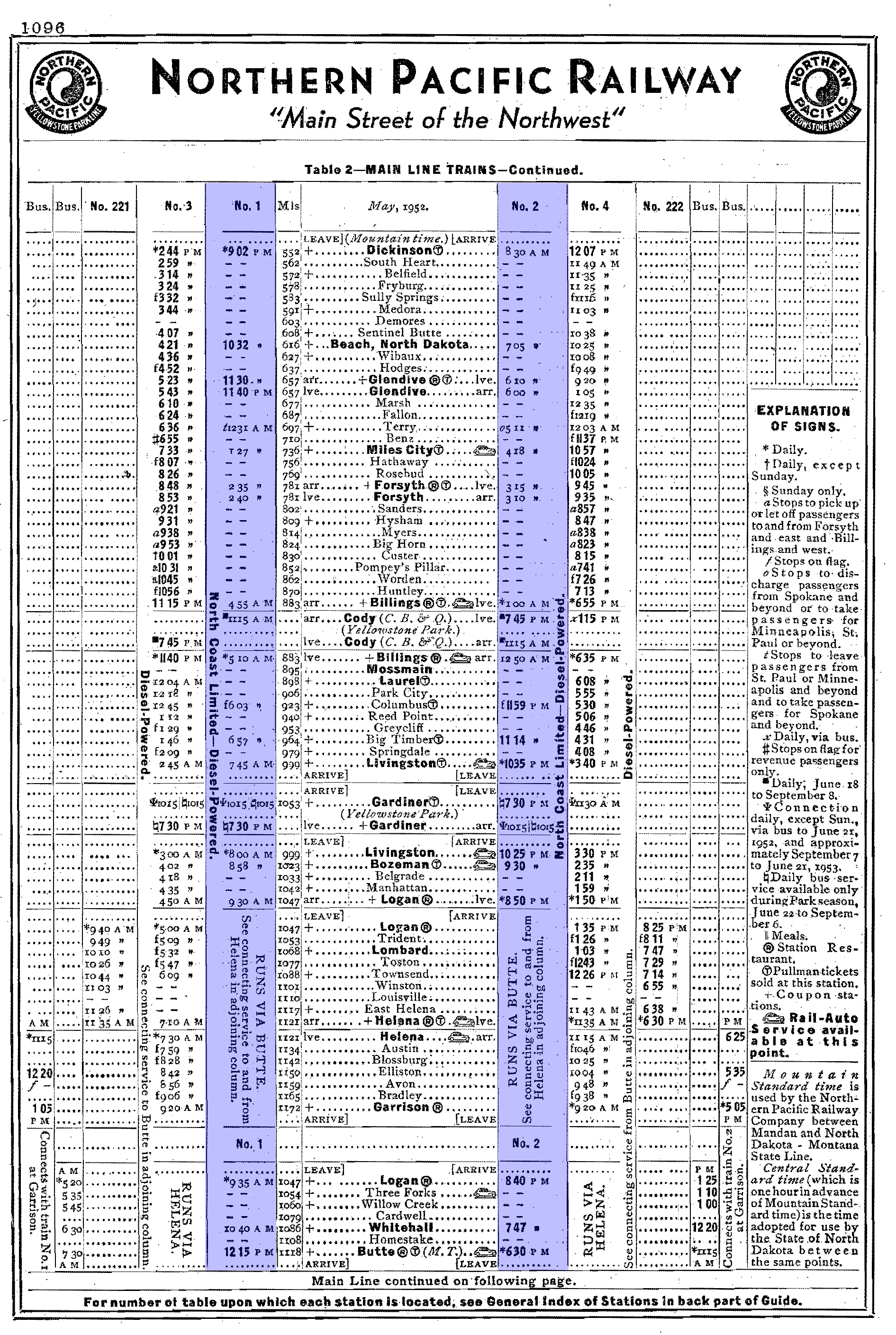 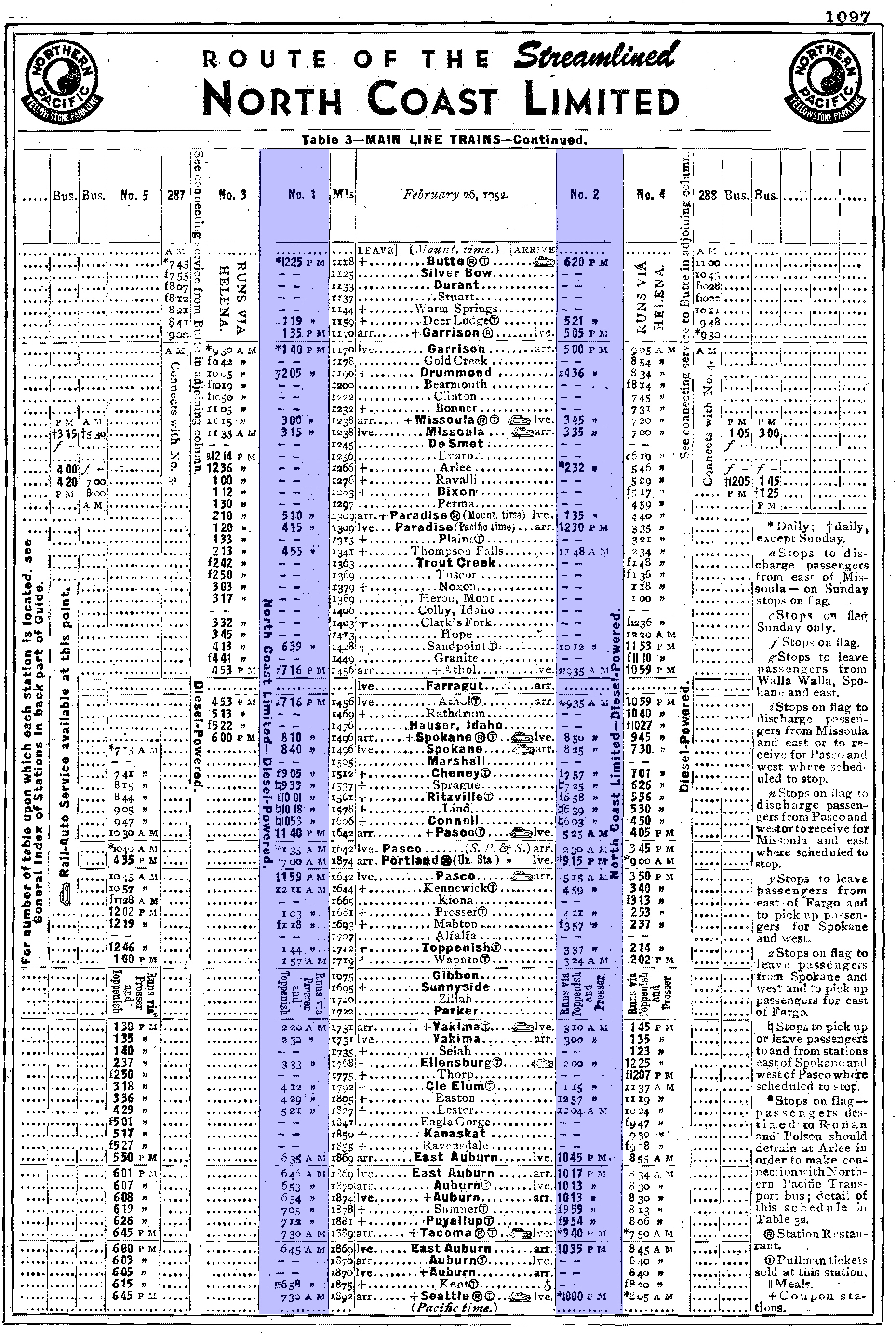 These features, coupled with the railroad slicing transit times down by 12-hours, allowed it to become very competitive with Great Northern's Empire Builder.

One way in which the railroad accomplished this was by debuting a new train, the Mainstreeter, which handled more local stops while the NCL was free to provide a limited stop run between Chicago and Seattle.

The Northern Pacific continued to add additional equipment to the NCL through the late 1950s by purchasing Slumbercoaches from the Budd Company. 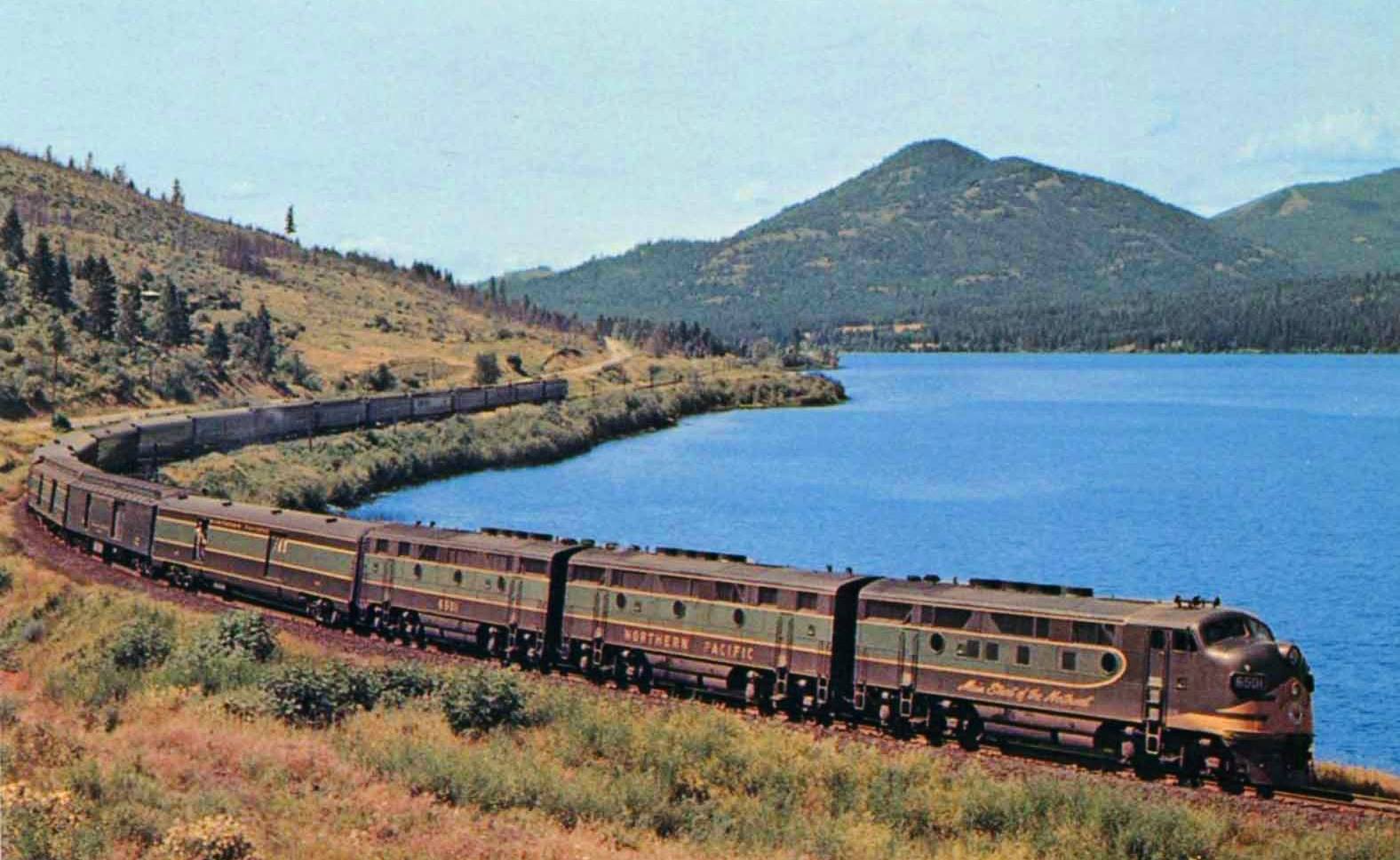 An A-B-B set of Northern Pacific F3's with the "North Coast Limited" along Cocolalla Lake, Idaho in 1952. Author's collection.

These new accommodations offered economical options for those who either could not or did want to afford first-class service.

One of the train's best remembered traits was simply the food itself.  Its "Great Big Baked Potato" was legendary and one of the NCL's best selling food items.

The NP's attempt to revitalize the train in the late 1940s and 1950s proved quite successful, so much so that the NCL continued to show very healthy ridership numbers through the mid-1960s!

Of course, it also didn’t hurt that the train ran through Yellowstone National Park with a station stop at Livingston, Montana. 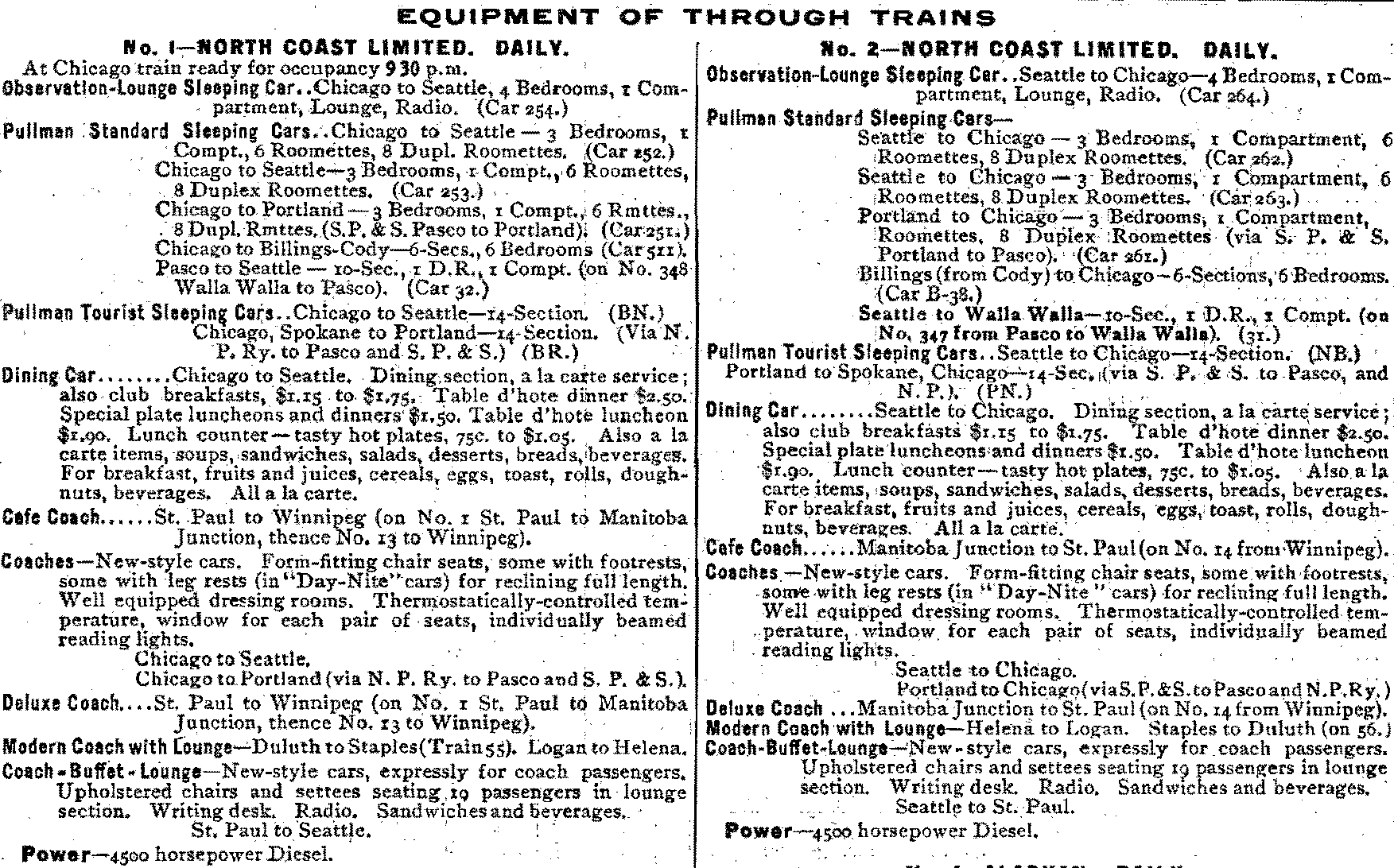 A 1952 consist of the "North Coast Limited." Author's collection.

Alas, however, with passenger operation costs rising through the 1960s, the NCL’s days were  numbered.

Earlier, in 1961, the Milwaukee Road had already bowed out of the Northwest passenger market when it canceled its posh Olympian Hiawatha. For more information about the train please click here. 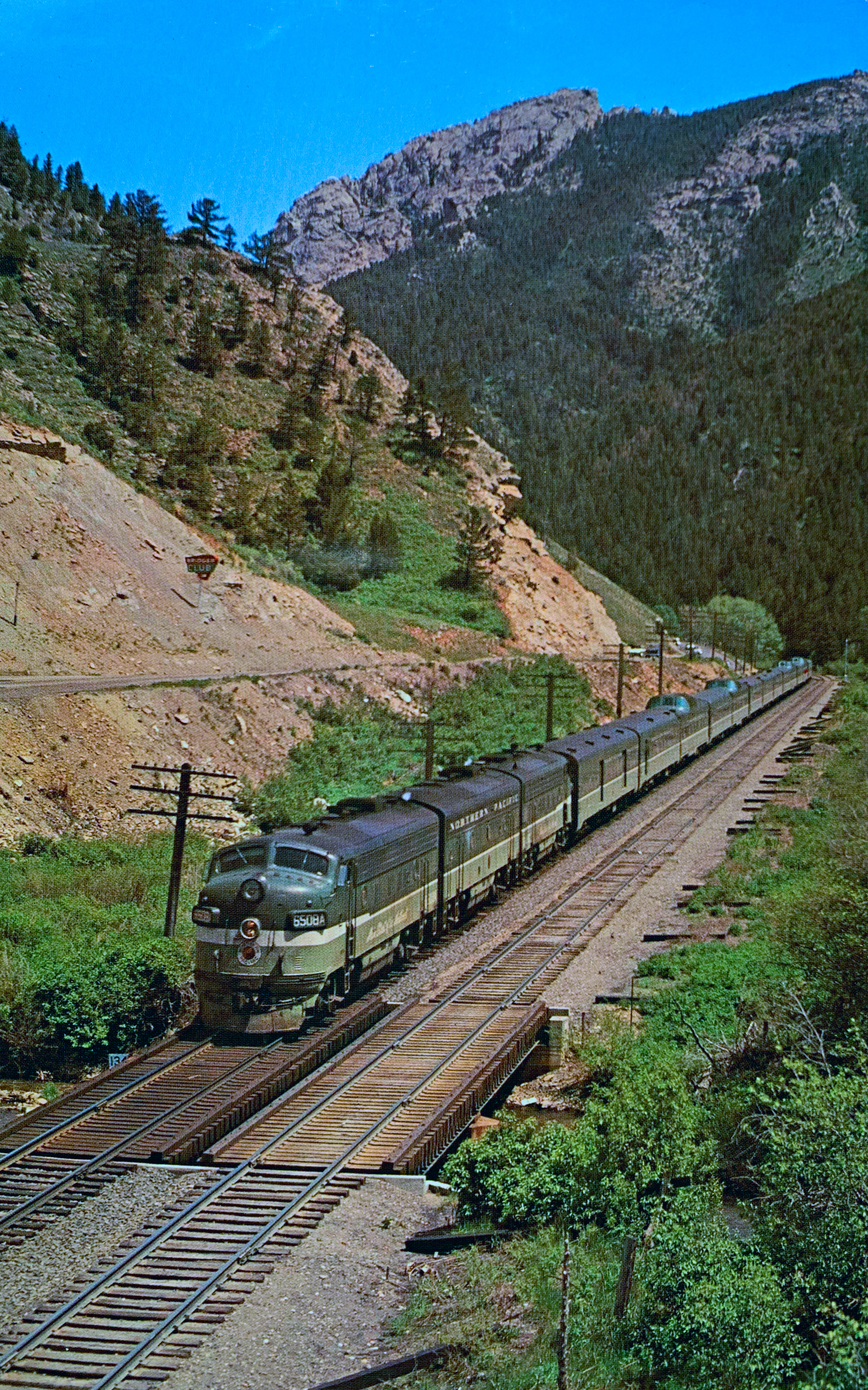 In this Northern Pacific publicity photo the "North Coast Limited" traverses westbound along the west slope of Bozeman Pass between Gordon and Chestnut, Montana during the 1960's. Author's collection.

Later that decade, the NCL and Empire Builder, were merged east of St. Paul, Minnesota under the Chicago, Burlington & Quincy.

When Amtrak took over all intercity passenger operations in 1971 then-Burlington Northern was more than happy to rid itself of its remaining passenger responsibilities.  As a result, the fabled North Coast Limited made its final departures on April 30, 1971.

Because both trains operated in the same market, Amtrak elected to continue operating the much more popular Empire Builder, thus shelving the NCL upon its start-up on May 1.