The E9 was the builder's final in the series built during a ten year production run beginning in the 1950s. The locomotive varied little from the earlier E7 and E8, save for some minor external changes and upgraded prime mover, which offered the most horsepower of any passenger model the builder ever produced.

With passenger rail travel in perpetual decline by the time it was manufactured far fewer E9s sold in comparison to its counterparts.

Interestingly, while less than 150 A and B units were ultimately built nearly 50 remain preserved or in use today, thanks largely to the model being the last in its class. The most notable of these are in service on Union Pacific, originally purchased by the railroad.

Today, the Class I maintains a small fleet as power for its business train and other special runs.  You can also catch an original Southern Pacific unit in its Daylight livery at the California State Railroad Museum. 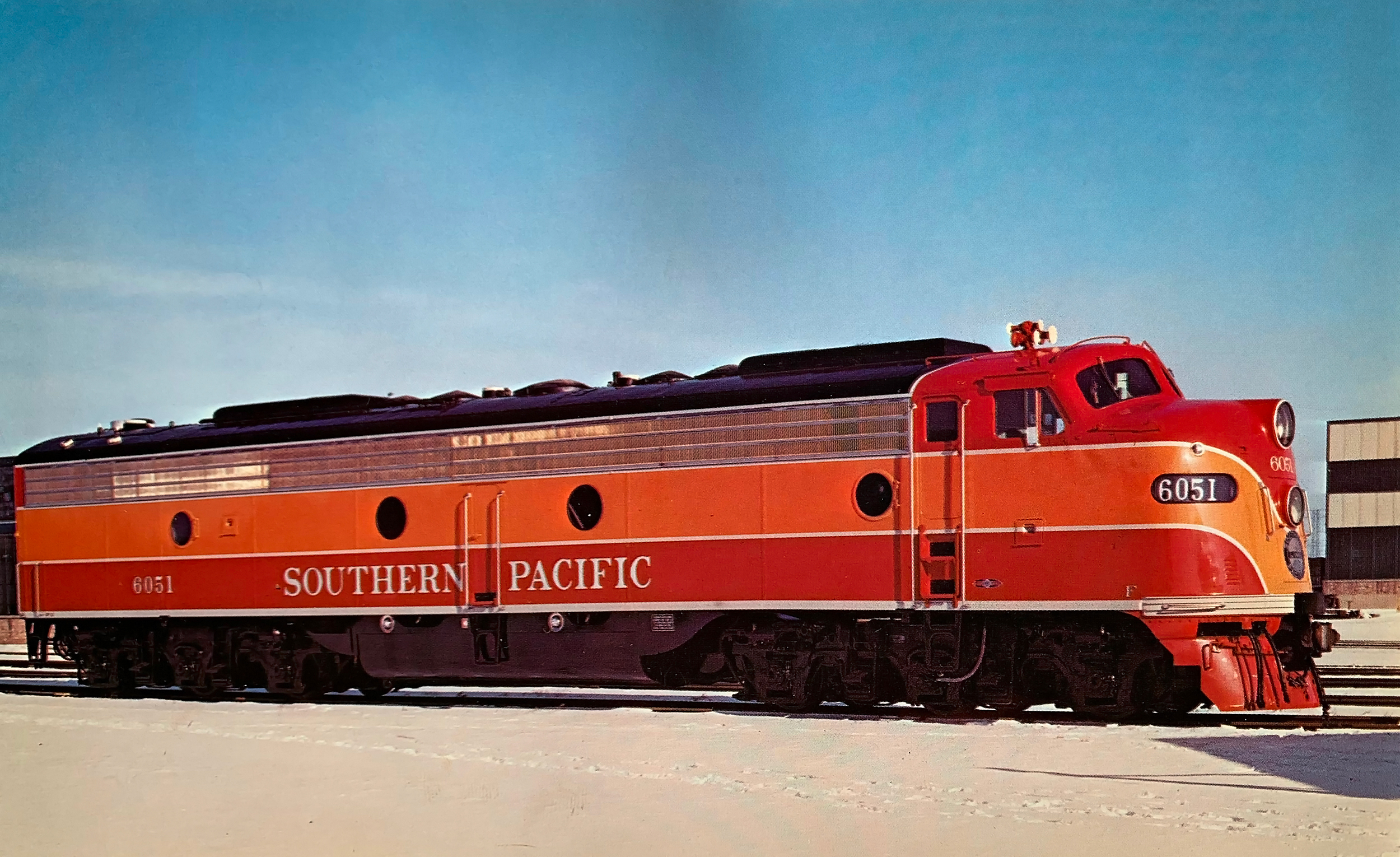 An Electro-Motive photo featuring recently completed Southern Pacific E9A #6051 in December, 1954. Today, this unit is preserved and operational in her "Daylight" livery at the California State Railroad Museum.

The E9 began production in the spring of 1954 as the builder's final entry in a series that spanned ten different models, dating back to the Electro-Motive Corporation's EA of 1937, built for the Baltimore & Ohio and Santa Fe (E1).

The E9 was quite similar to the E8 externally and internally carried similar to components to models dating back to the E6. Outwardly, it was 70-feet long with a grill parallel to the cab windows running along the entire flank of the carbody with four centered port holes.

It continued to feature an A1A-A1A truck setup (whereby the center axle was unpowered) and used GM's model D37 traction motors enabling the E9 to produce 31,000 pounds of continuous tractive effort and 56,500 pounds continuous (the same as nearly all of the E models). 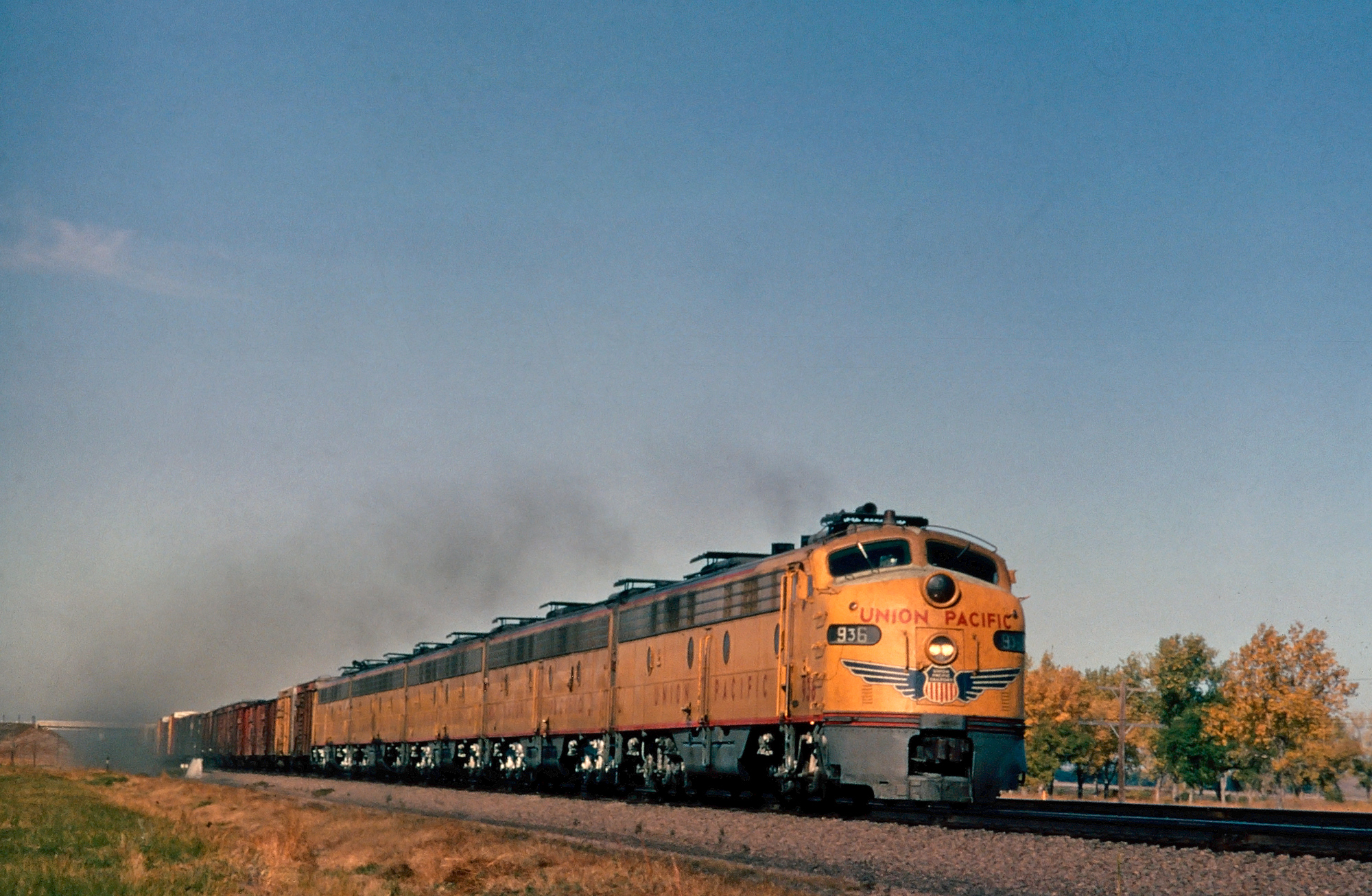 Internally, the E9 was the only unit in the series to feature GM's model 567C prime mover, which could produce 1,200 horsepower.

Featuring two 12-cylinder 567Cs the E9 offering 2,400 horsepower, easily making it the most powerful in the series. The locomotive's overall weight (for A units) remained in the same as other Es, 157.5 tons.

With passenger rail travel on the decline by the 1950s and railroads beginning to use other models in passenger service (such as FP7s), sales for Es slowed considerably. 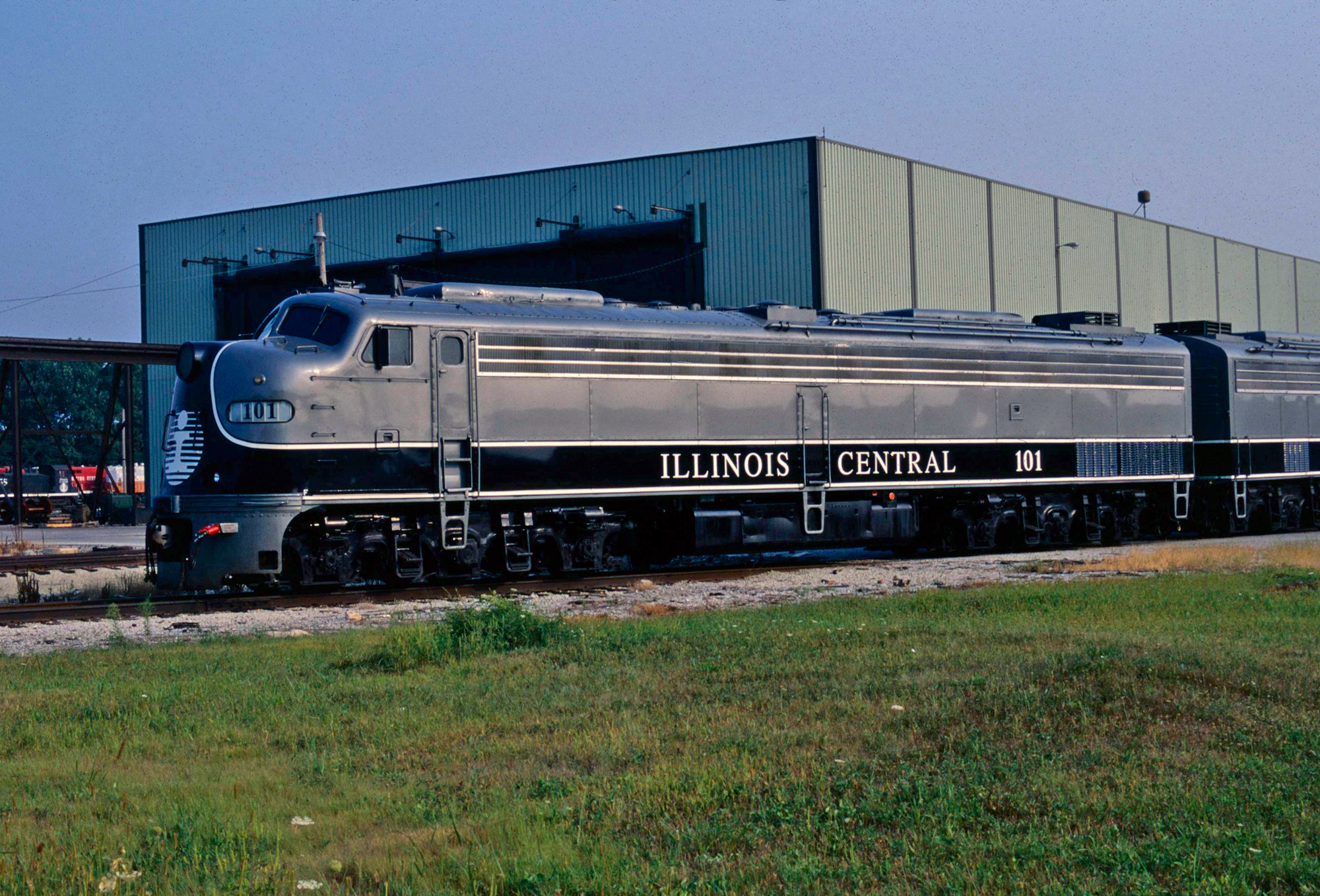 It is rather interesting that the UP saw the need to purchase such a large fleet of new passenger locomotives considering the environment of rail travel during the 1950s and 1960s. The railroad actually purchased more E9s than it did either E7s or E8s. 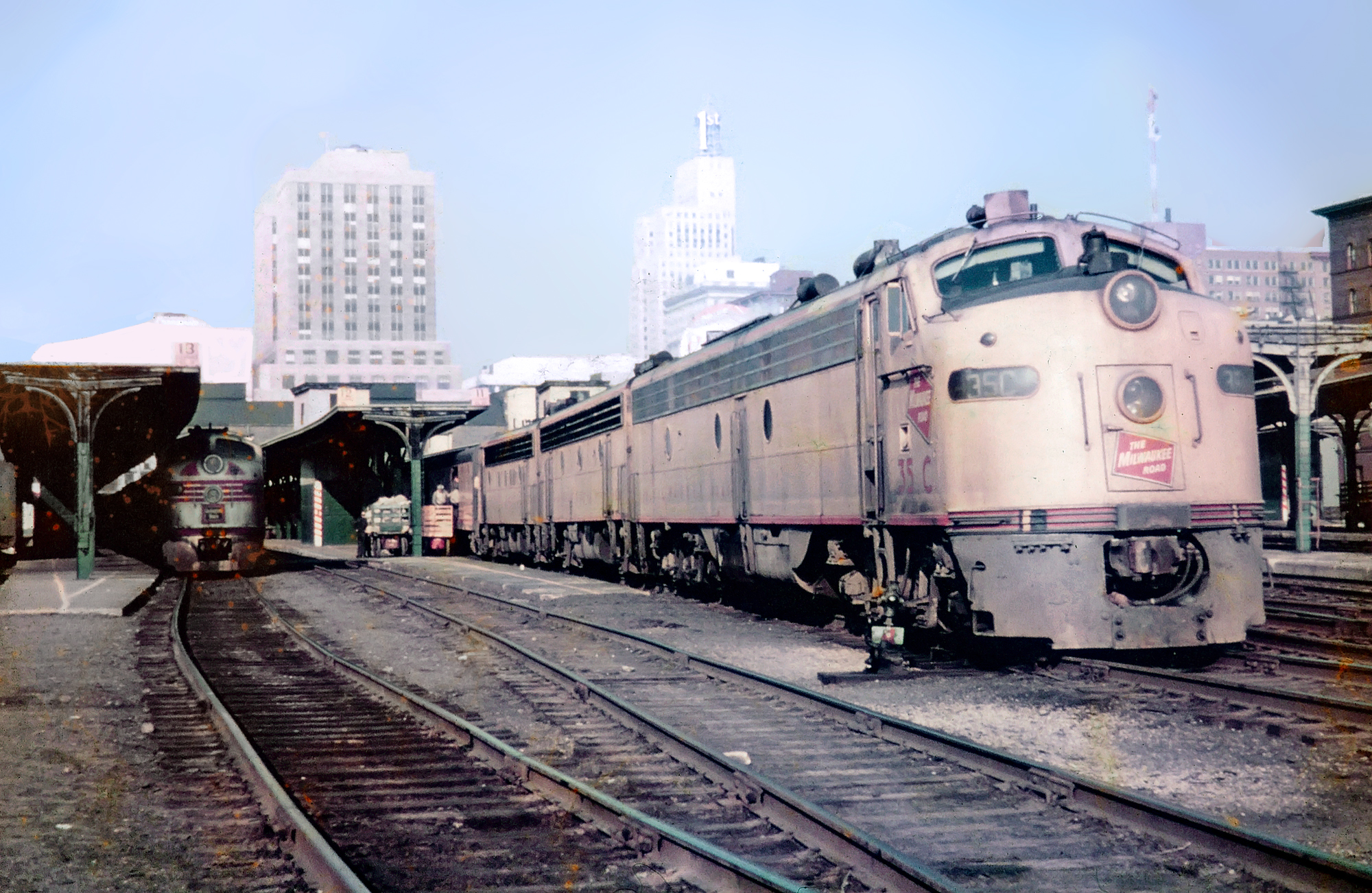 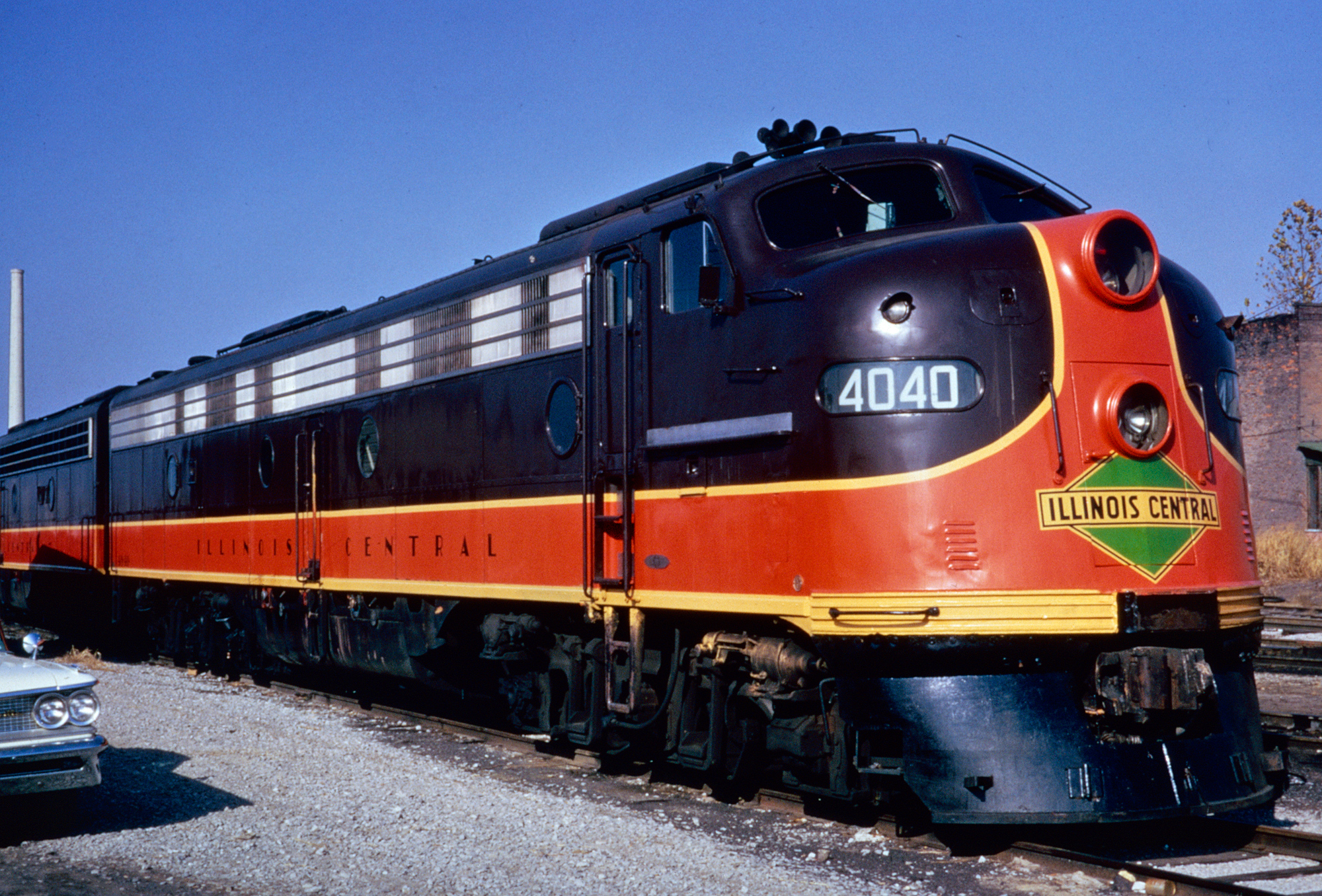 Illinois Central E9A #4040 is tied down at South Yard in Memphis, Tennessee on November 13, 1966. American-Rails.com collection.

In any event, the E9s that are still owned by Union Pacific as part of its heritage program include E9Am #949 and #951 along with E9B #966-B and E9Bm #970-B (the 'm' designation refers to units repowered with just one prime mover).

Interestingly, despite their slow sales numbers, several railroads saved their E9s for use on business trains or for other specialized services.