The F3 was one of the most successful cab units the builder ever produced with upwards of 2,000 A and B units constructed by the time production had ended.

The locomotive could be found in use on virtually all of the major railroads at the time and helped extinguished the use of steam in standard freight service.

Visually, the F3 varied little from the FT except that it offered slightly more horsepower and upgraded internal components.  Interestingly, there were a number of different design changes to the F3 over the years.

However, while Electro Motive did not change the name of the model during this time railfans have come to identify these changes with the term phases (and the "F5" variant).

Despite the fact that more than 1,800 F3's were constructed, today only around a dozen remain preserved.  Notable locations where survivors can be found include the Potomac Eagle Scenic Railroad (built as Clinchfield #800), Canadian Railway Museum (built as Grand Trunk Western #9013), and the Red River Museum (built as Missouri-Kansas-Texas #66-C). 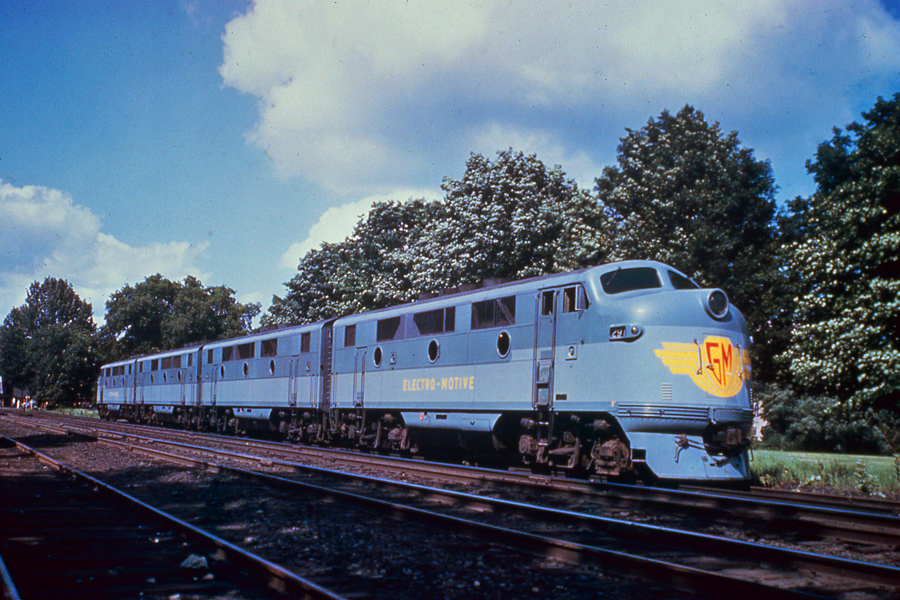 The F3 began production directly after the FT in July of 1945.  The primary difference between the two was the F3's D17B traction motors, which allowed it to produce 55,000 pounds of starting tractive effort and 40,000 pounds continuous.

The model still featured General Motors' 16-cylinder, 567B prime mover. Because the F3 was built from the same frame as the FT it retained the same length of just over 50 feet and weight, 115 tons.

The locomotive also kept the same gear ratio allowing it a (rated) top speed of 65 mph.  Externally, the easiest way to identify the FT and F3 is the number of portholes; the former had four very closely together that were centered on the long hood while the latter featured just two spaced several feet apart. 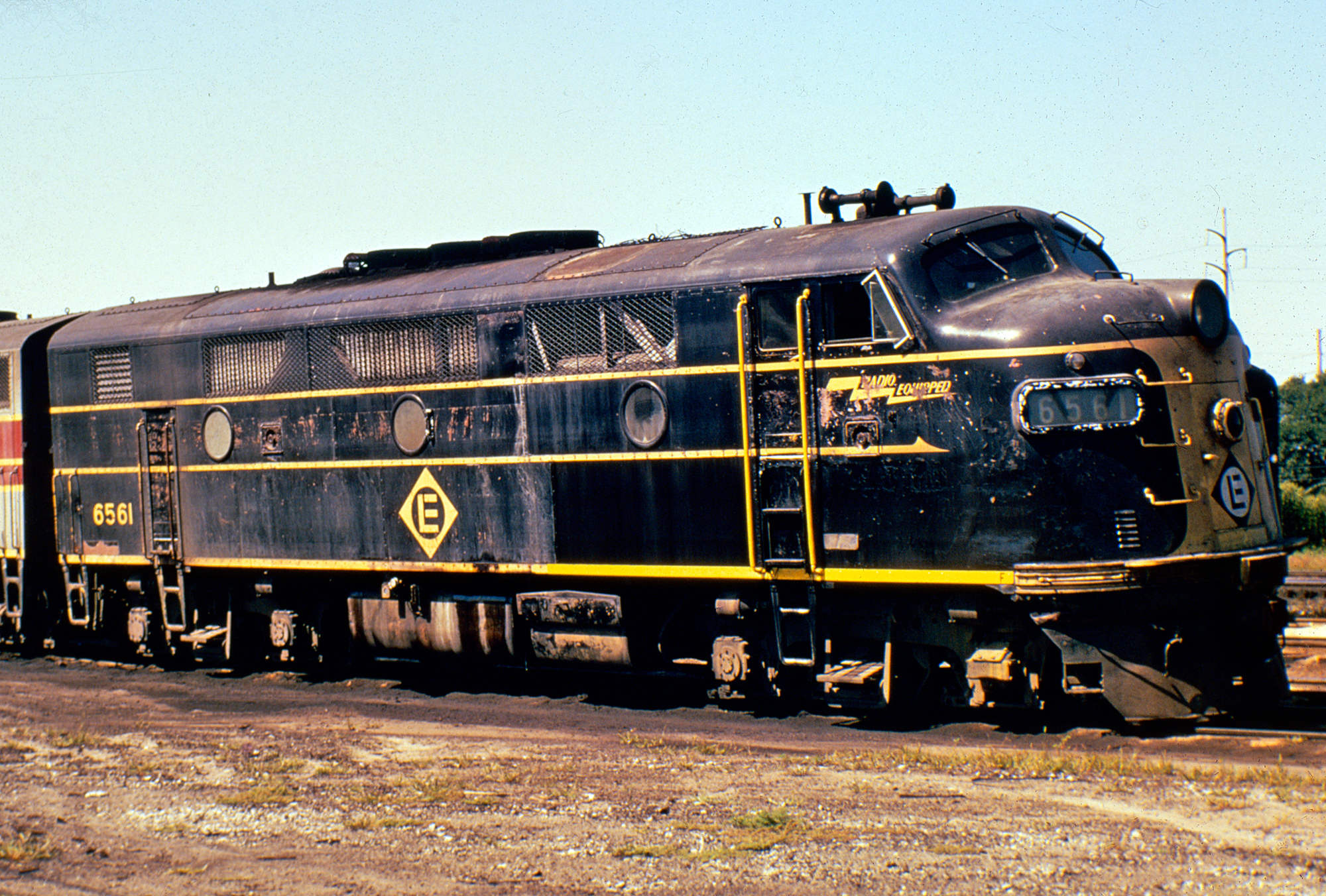 At the time of the F3's production the industry did not yet fully understand the benefits offered by six-axle (C-C trucks) locomotives in terms of the added tractive effort and adhesion they provided.

As such, during that era four-axle power was the rage and with the success of the FT and early E series designs sales for the F3 quickly took off.

Being one of the most successful diesel locomotive designs of that era the F3 was purchased by most of the largest Class Is at the time as well as a number of smaller lines.

Over its four year production run the model saw slight changes to its carbody five different times. However, for the most part it was identical to the F2 with its most distinguishing feature being the F3's large number boards.

As mentioned above, these changes were not directly denoted by EMD who simply kept track of serial numbers as new models rolled off the line. 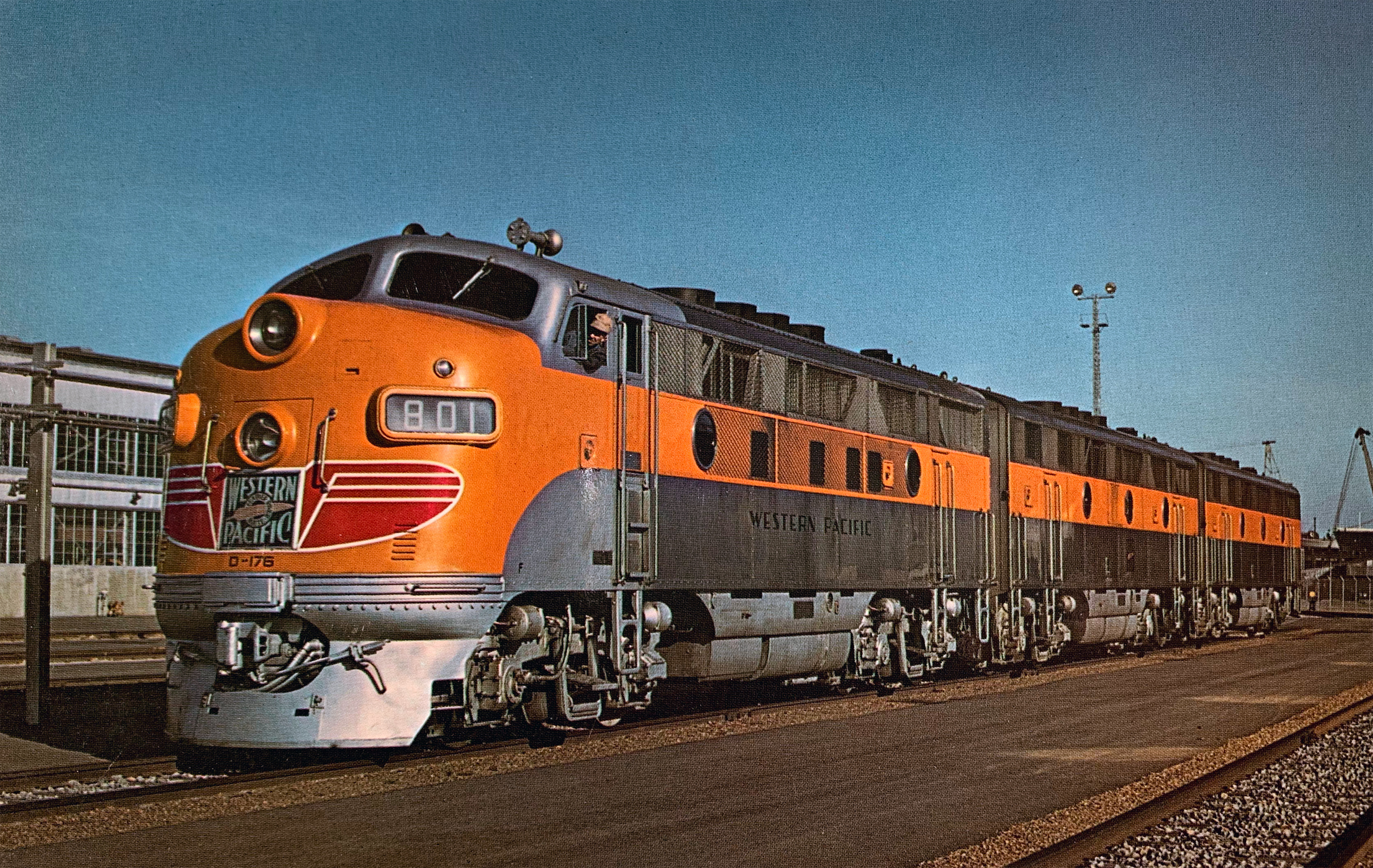 In this Western Pacific publicity scene, new F3's pose for a photo at Roper Yard in Salt Lake City, Utah during the summer of 1947. Author's collection.

For railfans there were five different phases; Phase I through Phase V (the latter is also referred to as the "F5"). All of these were extremely minor in nature, mostly involving slight changes to grill locations, radiator fans, portholes, etc.

Specifically the variances include: 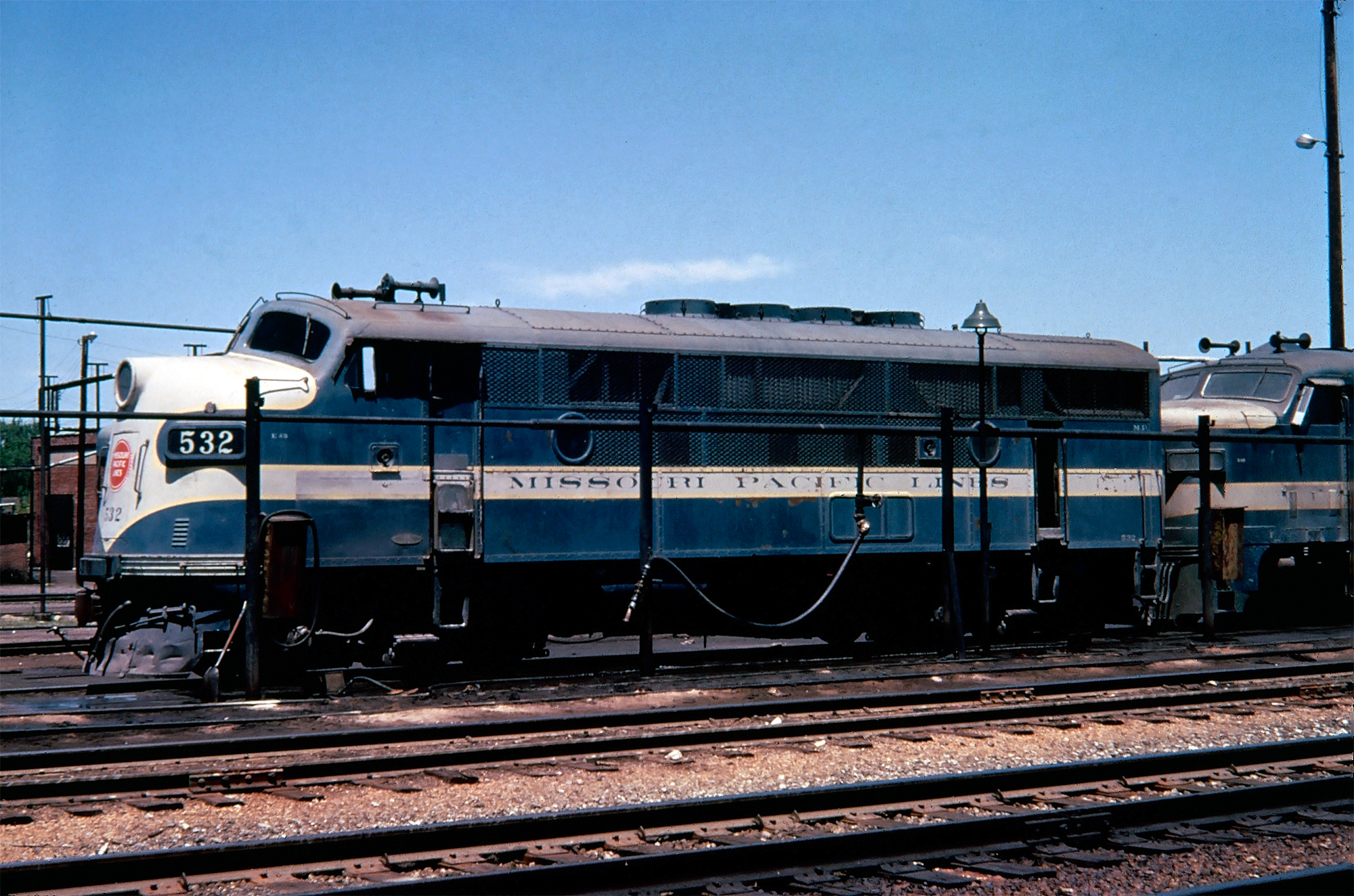 The incident which made Santa Fe F3A #19-L a celebrity, and luckily no one was seriously injured. A

Author Joe Lesser notes that four trains were scheduled to arrive at LAUPT that morning; Train #19 - "The Chief," Train #3 - "The California Limited," Train #1 - "The Scout," and Train #17 - listed only as "streamliner" on the timetable.

Upon cutting off from his train, engineer Fred Hurst was following instructions from the herder (a trackman assigned to work station jobs) with his A-B-B-A set of F3's to ease towards the bumping post, prepare to reverse through the crossover, head to the release track, and finally make his way to the roundhouse at nearby Redondo Junction.

As an investigation later discovered, Hurst accidentally turned the F3's MU2A valve, which released air-brake control from the engines.

At this point the locomotives effectively had no brakes and they slowly rolled forward, clipped through the bumper, passed over a 12-foot wide paved road, jumped the curb and sidewalk, and finally smashed through a one-foot thick concrete wall. 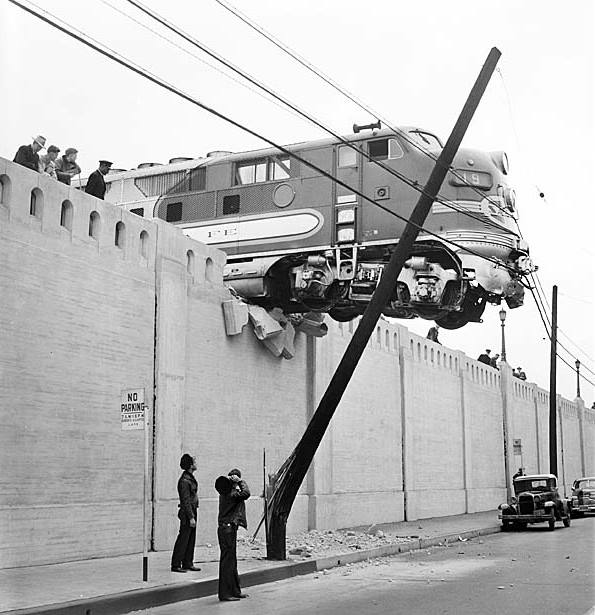 Photo by Fletcher Swan, AT&SF employee at the time.

Lead locomotive #19-L finally came to rest on its battery case and fuel tank although its front truck dangled over Aliso Street with the unit's nose having snapped a utility pole.

Hurst had remained at the controls the entire time and gingerly made his way out of the back of the locomotive once it came to a stop. However, his fireman, Frank Rittenhouse, had bailed out as soon as he realized something was amiss.

Ultimately, Hurst was found at fault and permanently removed from service. Interestingly, #19-L's adventures did not end here.

It was later involved in a derailment on October 30, 1949; while leading train #22, the eastbound "El Capitan" it struck a broken rail at-speed (60-70 mph) near Azusa, California, rolled over and caught fire. Thankfully, only one crew member and seventeen passengers were slightly injured.

The locomotive was later repaired and returned to service. It was then rebuilt during the CF7 program in the early 1970s and became #2622. In the 1980s it was sold to short line Louisiana & Delta and finally retired in June of 1987.

Many thanks to Joe Lesser's article, "The Case Of Santa Fe's Flying F3" from the March, 2000 issue of Trains Magazine for the historical background concerning this incident. 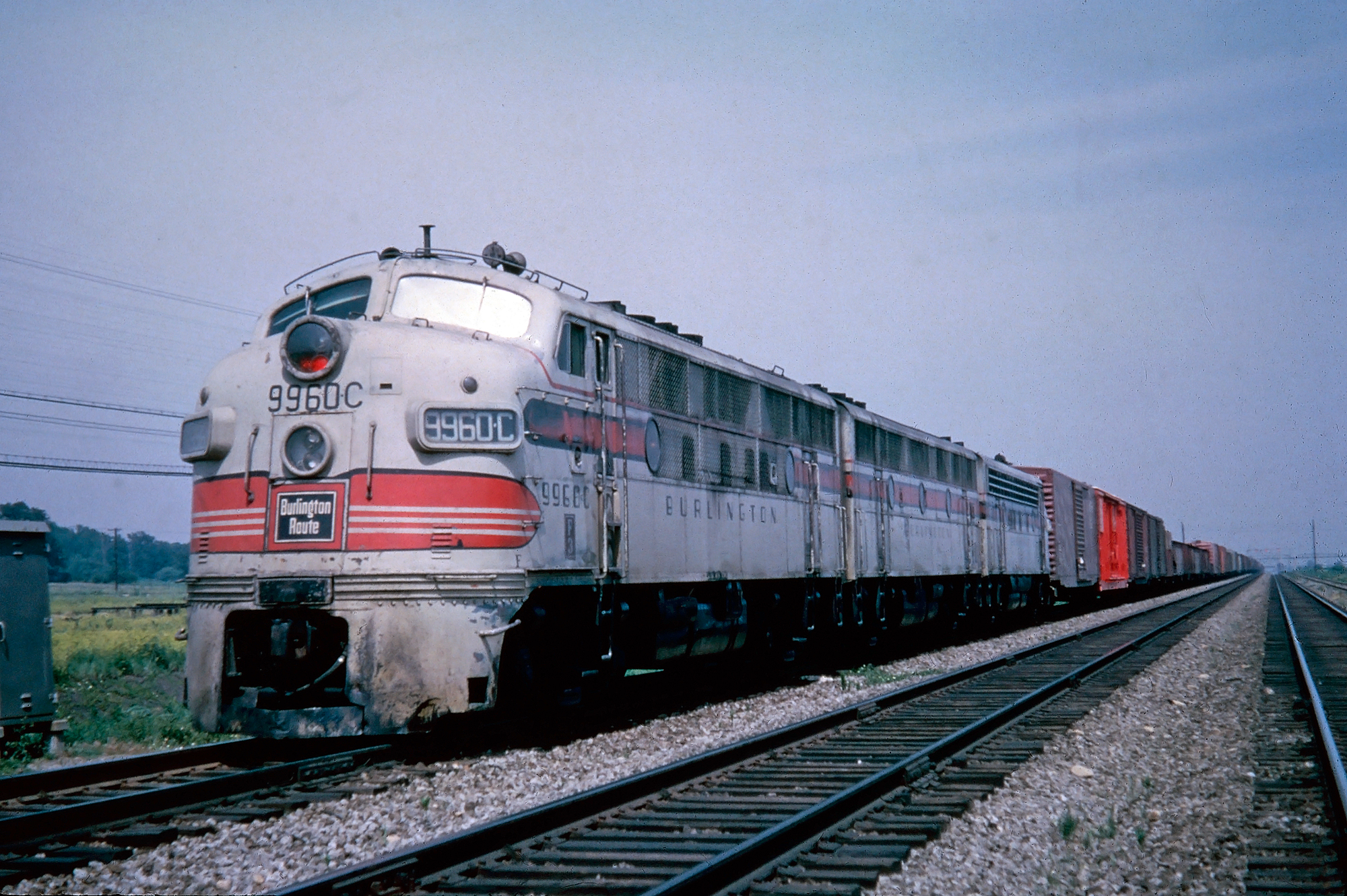 In 1948 the last three phases of the F3 were produced: 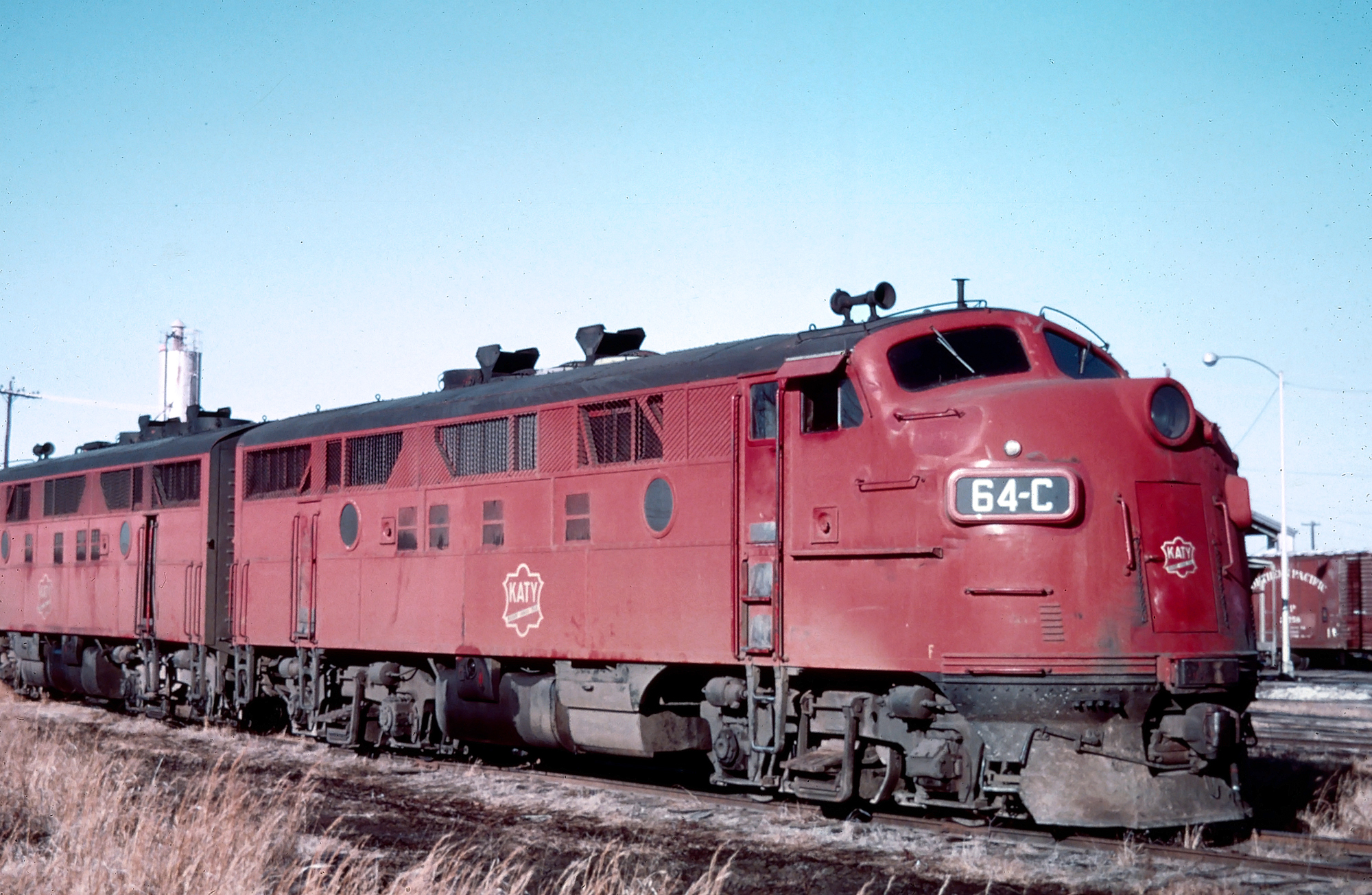 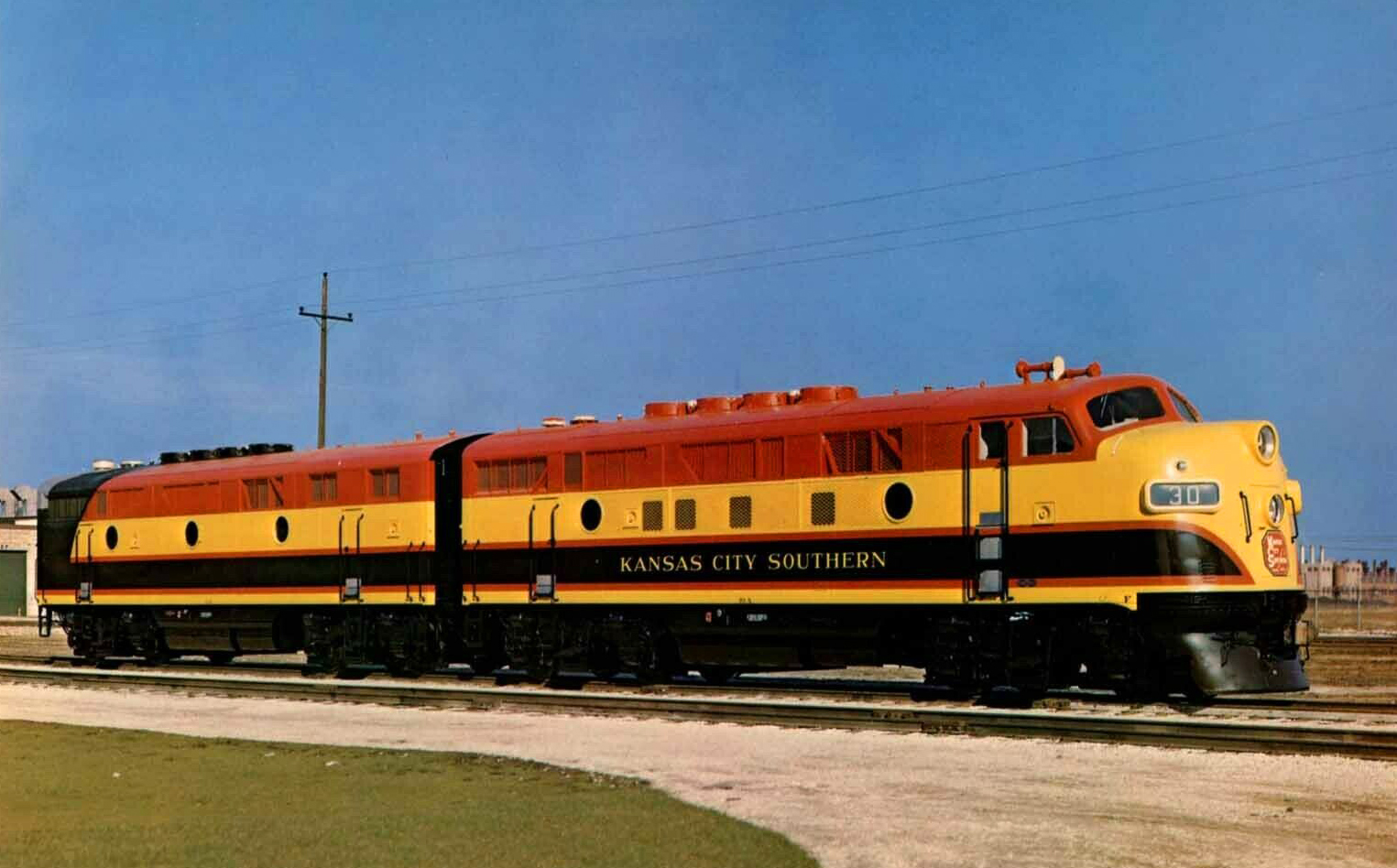 This Electro-Motive photo features a beautiful new set of Kansas City Southern F3's, #30-A and #30-B, in November, 1947. These units led the "Southern Belle" between Kansas City and Shreveport, Louisiana.

Many of these models remained in regular freight service for decades with some still in use through the 1990s.   Electro-Motive's F3 was the first to see buyers from Canada when the Canadian National purchased 4 As and 2 Bs.