The U36B was the final four-axle variant General Electric cataloged as part of its Universal line.  It was also the powerful B-B road-switcher any manufacturer ever offered, boasting an impressive 3,600 horsepower.

From a historical perspective, GE's early 7FDL prime mover is often underappreciated for its ruggedness and pure horsepower capability.

The U36B was a compact design at just over 60 feet in length, yet offered 600 more horsepower than any other model.

By comparison, Alco offered its C636 and Electro-Motive its SD45; both of which could also produce 3,600 horsepower. However, these models were C-C variants (six axles) and considerably longer (the C636 was nearly 70 feet in length and the SD45 over 65 feet).

From a sales perspective, the U36B was not a success.  However, its numbers were aided by Seaboard Coast Line's order, which totaled 108 examples of the 125 sold.

By the 1970s, railroads were well aware of the advantages that six-motored, high-horsepower locomotives offered.  As a result, comparative four-axle models saw increasingly fewer orders.

Interestingly, the U36B did earn some distinction among train enthusiasts as the type chosen to power the all-new Auto Train of 1971.

The service was a privately-funded and managed operation.  Its trademark was allowing passengers to take their automobile with them when traveling from Virginia to Florida.

The idea was initially successful although the Auto Train later foundered.  It was subsequently retained by Amtrak and remains a popular service today. 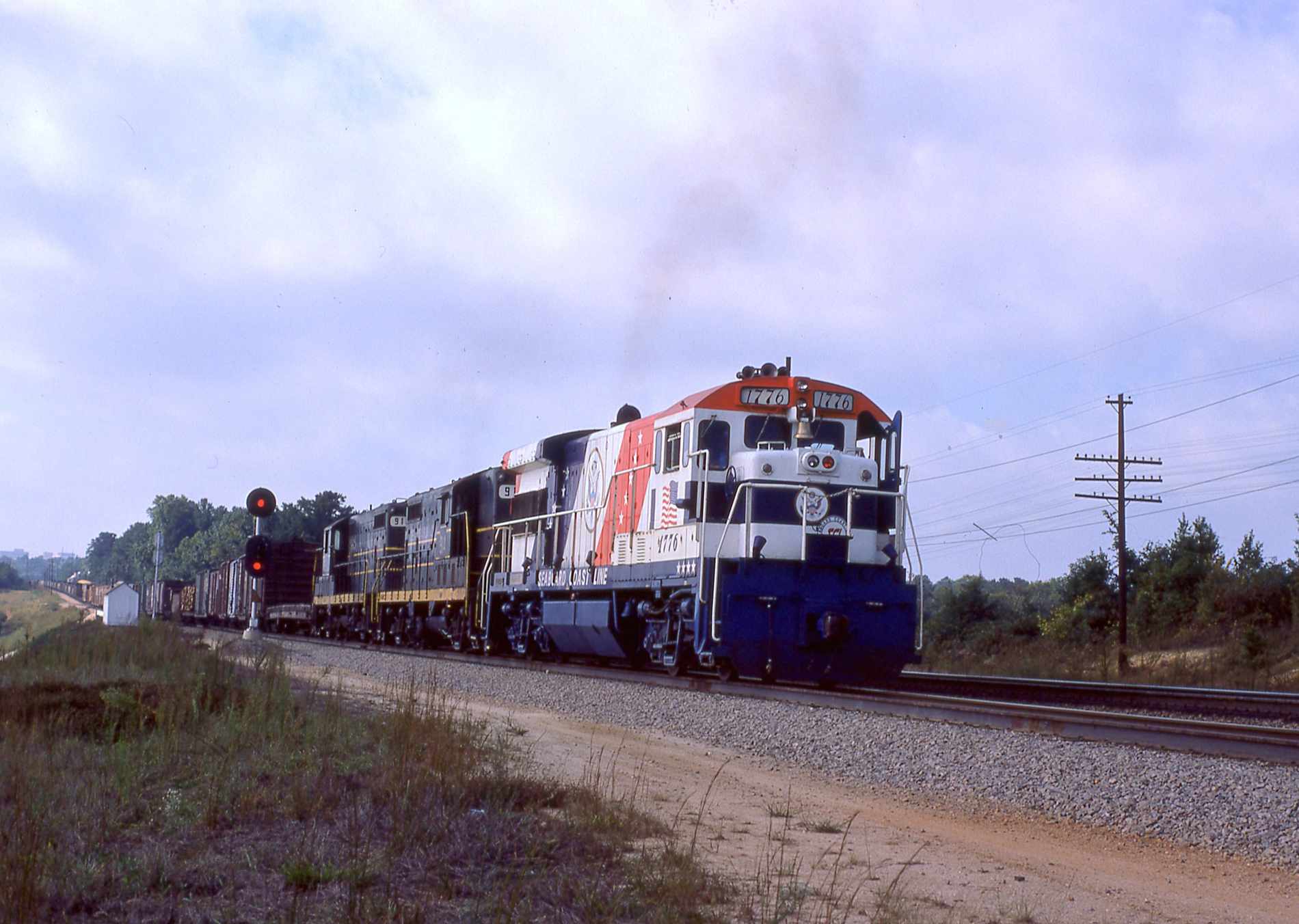 Seaboard Coast Line U36B #1776, in its Bicentennial colors, is seen here leading a long freight through Raleigh, North Carolina during the summer of 1971. Warren Calloway photo.

The U36B was a continuation of the earlier U33B with the first unit, Seaboard Coast Line #1748, rolling out of Erie, Pennsylvania in May, 1970.

GE made no fanfare of the upgraded model, which first began testing in October, 1967 as upgraded U33B variants. according to Greg McDonnell's book, "U-boats."

Interestingly, neither did the largest buyer of the model, Seaboard Coast Line.  The railroad numbering series for the U36B was simply a continuation of the U33B line.

As GE advanced its locomotive development, the U36B outwardly carried many of the same features of the first "Dash 7" designs.

Most notable was the rear flared radiator which had first appeared on the U33B to handle the increased horsepower. Today, this feature remains a classic GE trademark.

The Seaboard Coast Line purchased the most, 108, and the Auto-Train Corporation originally ordered another 17.  However, in an interesting twist, the company went bankrupt before the final four units were delivered.

As a result, what would have became Auto Train #4013-4016 sat on GE property for two years before Conrail expressed interest in the quartet in 1976.

The units became Conrail #2971-2974 and were delivered to the new upstart in September, 1976.  These locomotives carried particular noteworthiness as the first new power on the Conrail system.

The Seaboard Coast Line's 103 models remained in use through the CSX Transportation merger of the 1980s.  The company had mostly retired the fleet by the early 1990s and subsequently sold the units to various short lines.

Lastly, for more information about the U36B, data sheet information, and production totals please refer to the charts below.

All Seaboard Coast Line U36B's were equipped with Blomberg trucks. 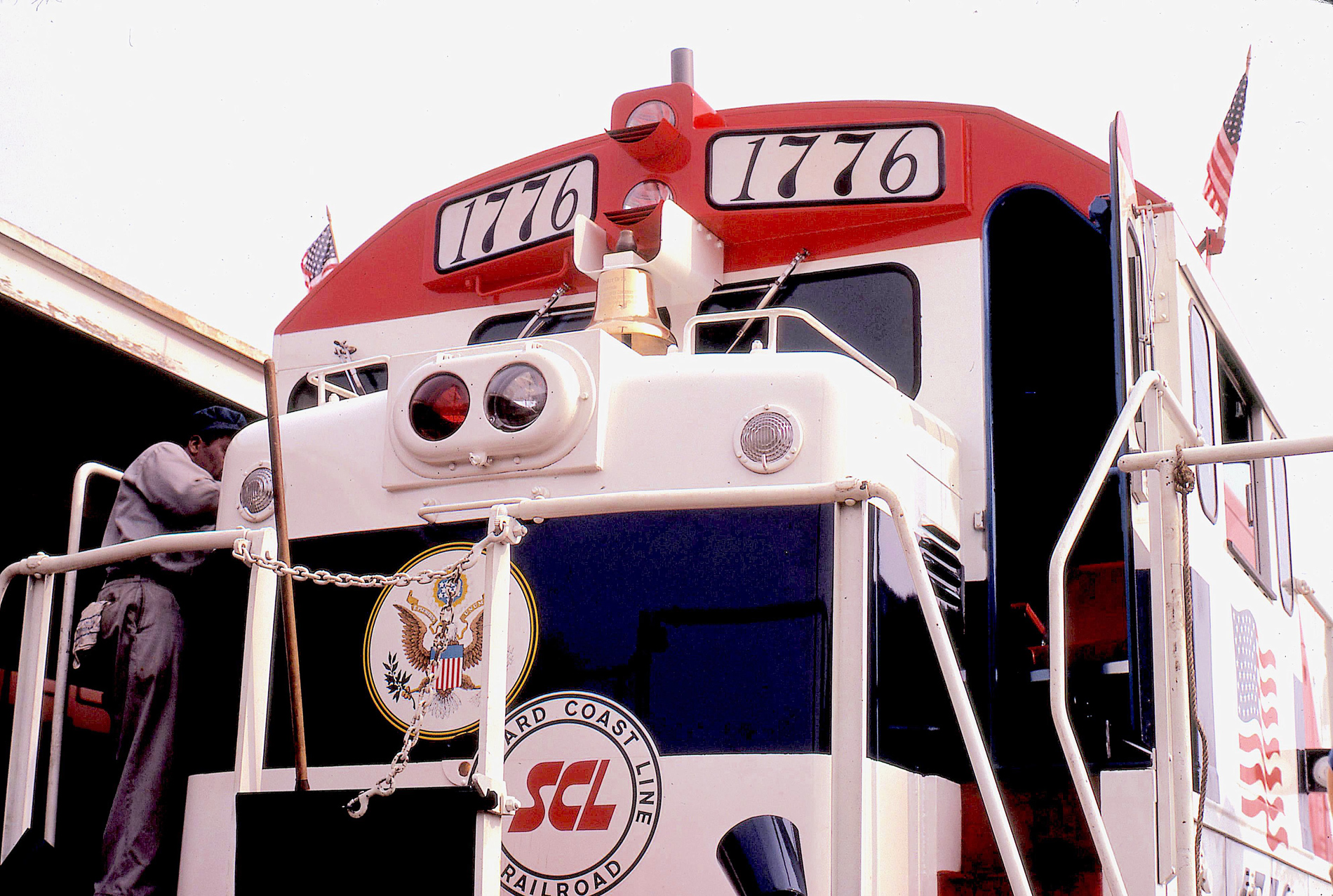 Today, at least one U36B is preserved, former Seaboard Coast Line #1776 (2nd) that originally wore Bicentennial colors upon its delivery in 1971.  Today it resides at the Lake Shore Railway Historical Society.

The unit had spent a great deal of time at the Massachusetts Call Volunteer Firefighters Association following retirement from CSX.

During this time the museum states that it served as "a rolling education/training unit for emergency services and police personnel across the eastern United States."