The U33B was the fourth, and most powerful, 4-axle road switcher the company offered up until that time.  When introduced in 1967, however, the industry was moving away from four-motored road-switchers.

The U30C, and Electro-Motive's SD40 series, convinced railroads that high-horsepower, six-motored designs were the future in road service work.

As Greg McDonnell notes in his book, "U-boats," the U33B was not actually meant as a stand-alone model but rather a continuation of the earlier U30B.

Most orders for were taken by one railroad, Penn Central, although a handful of other lines did purchase it as well including the New York Central (a pair of upgraded U30Bs), Seaboard Coast Line, and Rock Island.

Today, all of the original 137 examples of the U33B have been retired and none are preserved. 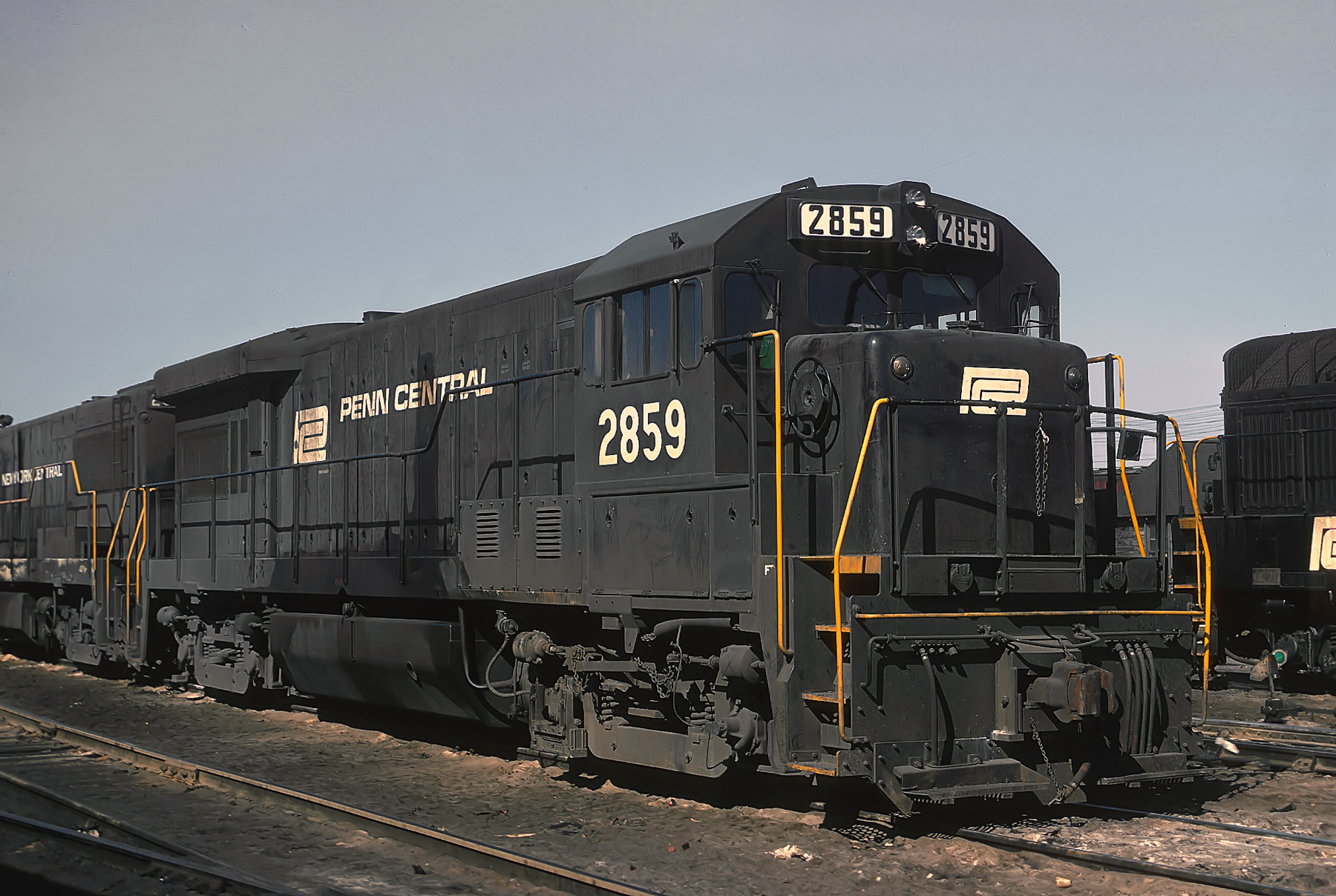 The U33B began production in September, 1967.  As Mr. McDonnell notes, the model was merely a continuation of the earlier U30B.

Interestingly, the original four U30B demonstrators, #301-304, were returned to Erie, Pennsylvania in the early summer of 1967.

During this time the builder upgraded the locomotives with an additional 300 horsepower available to the traction motors, which boosted total output to 3,300 horsepower.

In doing so, a larger rear radiator assembly was required.  This "winged" look became a trademark of GE locomotives, and continues today under successor Wabtec Freight.

The four locomotives emerged in July still wearing largely the same black livery but with the addition of a bright yellow nose.  These changes aside, the U33B was virtually identical to its earlier counterpart.

While some railroads had requested high, short hoods on other U-boat models, all U33Bs were built using GE's standard short, stubby nose.

By the time production had ended in June, 1970 just 137 were sold to four different railroads.  Penn Central wound up with the most, 81 units, which continued to see use well into the Conrail era.

As sales for its four-axle designs continued to decline, GE began to phase out the line and offered no more after the U23B finished production in 1977.

Interestingly, the U23B (meant for use in light duty yard and freight service) actually proved a surprising success as General Electric sold more than 400 examples to 17 different railroads and industries.

The U30Bs remained in revenue service through successors Conrail and CSX Transportation through the 1980s but most were off their respective rosters by the early 1990s.

The Rock Island's U33Bs were acquired by various buyers following the railroad's 1980 liquidation.

* Built as part of New York Central's fleet of U30B's numbered 2830-2889 these units, which even sported builder's plates denoting them as U30B's, were actually U33B's according to Greg McDonnell's book "U-boats."

The units were distinguished by their wider rear radiators, need to support the higher horsepower output.

The history of General Electric's "U-boat" line is fascinating.  From a macro view it is viewed as a success and helped propel GE into the lead as a locomotive manufacturer by the 1980's.

Railroads generally regarded them as reliable, easy to maintain, and offering a variety of new, innovative technologies.  However, from a micro view, crews loathed U-boats.

In an interesting twist, one can still find rebuilt Electro-Motive models from the 1960's on Class I rosters (GP30 series, SD40 series, etc.) today while nearly all early U-boat variants have either been scrapped or now reside in museums.