The U18B was a late model design the company marketed as a secondary, light branch service locomotive.  While GE did sell more than 150 U18Bs, overall it was not extremely successful.

By the 1970s, railroads had lost interest in specialized, non-switcher designs.  To make matters worse, the U18B drew complaints of being under-powered and suffering reliability issues.

In addition, crews stated the locomotive featured a notoriously rough ride.  It was the Seaboard Coast Line that wound up acquiring the most "Baby Boats," purchasing 105 between 1973-1974.

The Maine Central picked up 10, the Providence & Worcester a single unit, and Texas Utilities two units. 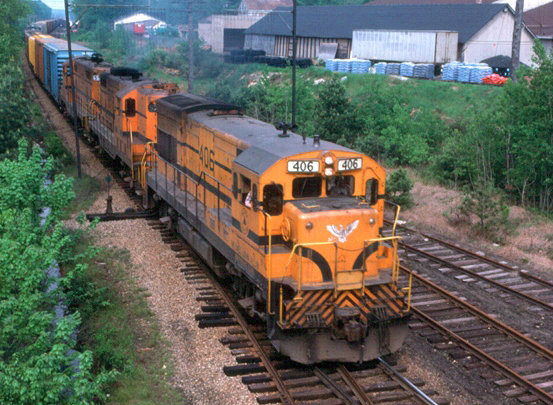 Maine Central U18B #406, the "Colonel John Allan," leads its northbound freight out of Brunswick Yard with assistance from two GP7s on August 20, 1981. Note the old tell-tales above the first GP7. Randy Kotuby photo.

The U18B was a late addition to the Universal line, beginning production in March, 1973.  It was equipped with GE's standard 4-cycle, 7FDL prime mover that could produce 1,800 horsepower.

The Maine Central was not the largest buyer of the U18B but its fleet was particularly interesting.  As Brian Solomon notes in his book, "GE Locomotives," the railroad acquired the model to replace its old Alco road-switchers (RS2, RS3, and RS11).

Since the locomotives were completed just prior to the nation's Bicentennial (1976) they were listed as part of MEC's "Independence Class."

The units were painted in yellow paint with green pinstriping and featured a massive eagle adorning the nose.  In addition, the railroad named each unit after a notable person or location involved in the Revolutionary War.

The MEC primarily assigned its U18B's to the legendary Mountain Division between Portland, Maine and St. Johnsbury, Vermont.

The remained in use for more than 25 years and some even made it into successor Guilford paint, as illustrated in the above photo.

The SCL was quite fond of the U18B, which replaced its aging fleet of RS2's and RS3's.  They were primarily used in branch and light duty service all across the railroad's network.

In addition, three units #390-392, were assigned to phosphate service in Florida according to Greg McDonnell's book, "U-Boats." 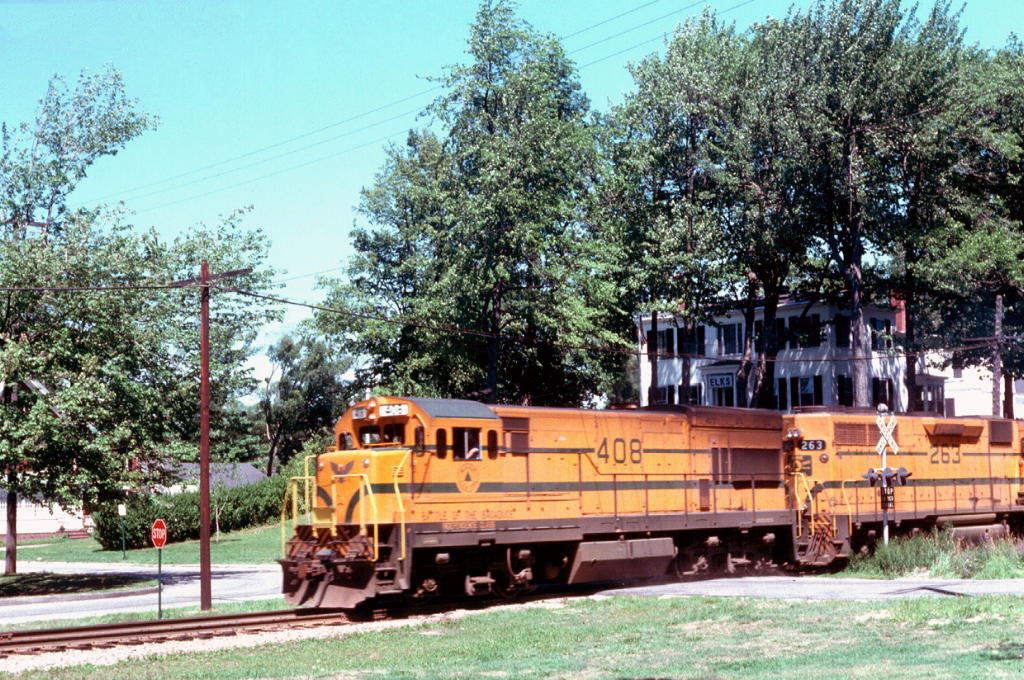 A Maine Central freight, led by U18B #408 (named the "Battle of the Bagaduce"), rolls through Brunswick, Maine during the summer of 1976. Randy Kotuby photo.

Production on the U18B had ended by October, 1976. Apparently, the unsuccessful nature of the model convinced General Electric to scrap any plans to released a follow-up.

This unit would have been known as the B18-7 as part of the company's new "Dash 7" series (offering new electronics among other features).

Today, again, you can find a handful of U18Bs still in operation on short lines although there are none known to be preserved.