Union Pacific 3985 is a 4-6-6-4 "Challenger"-type steam locomotive and the largest such locomotive still operating anywhere in the country. UP once owned more than one-hundred of these locomotives but today only two remain preserved.

Interestingly, #3985 did not always remain on the railroad's roster. It sat retired, for many years, in Cheyenne before a volunteer effort by Union Pacific employees brought the locomotive back to life in the early 1980s.

The Big Boy enjoyed an incredibly successful public relations campaign across the UP system in 2019 where more than 1 million spectators saw it thunder across the railroad that year.  Thankfully, #3985 will remain as part of the steam program, stored in the Cheyenne roundhouse.

It appears #3985 will, after all, enjoy a second life.  It was announced on April 28, 2022 that the locomotive would be donated to Railroading Heritage of Midwest America, the major non-profit organization based in the old Rock Island shops in Silvis, Illinois and which operates Milwaukee Road 4-8-4 #261. The organization plans to fully overhaul the locomotive and operate it in excursion service. 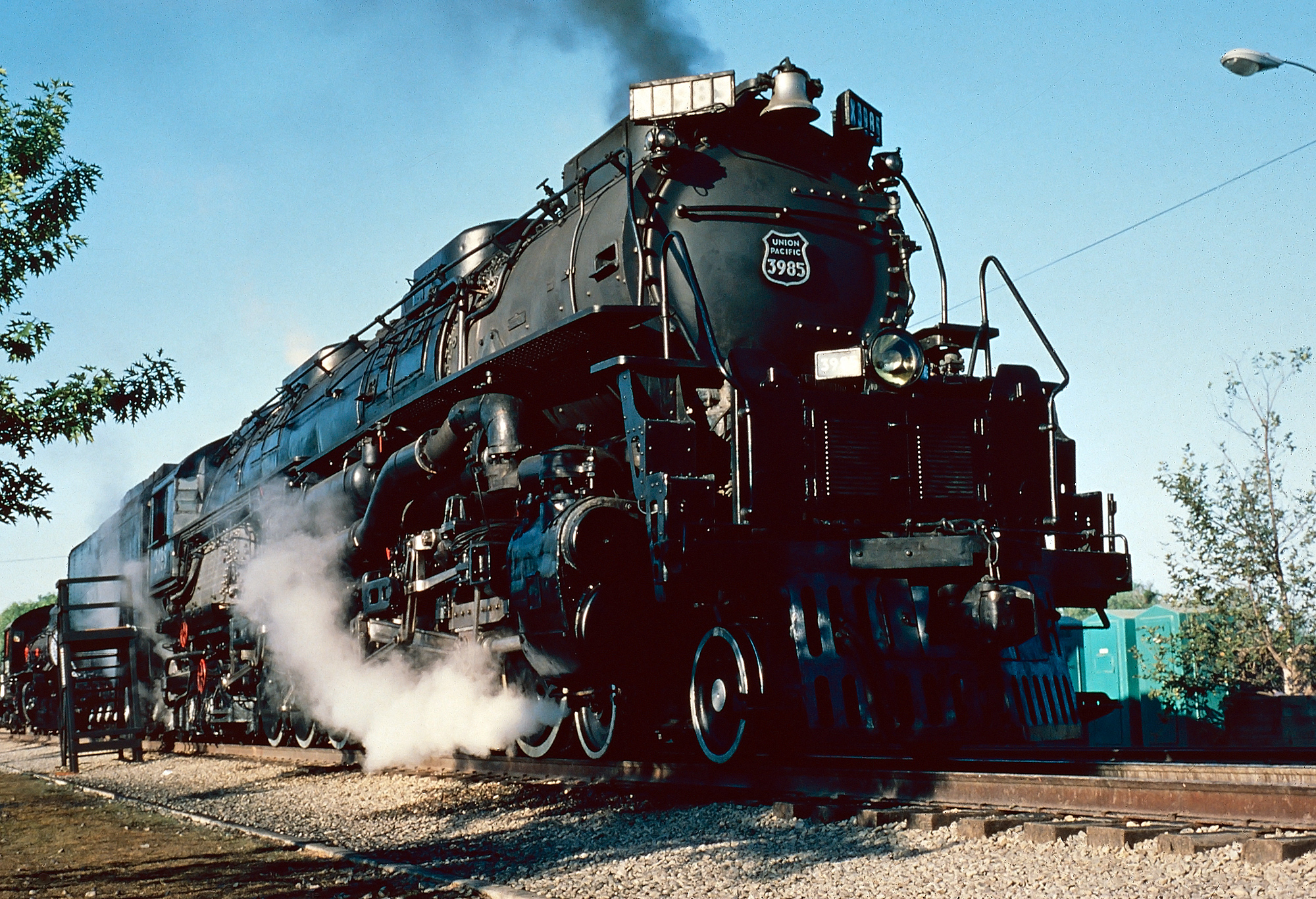 The Challenger-type has its beginnings due to a need by the Union Pacific for a more powerful locomotive that could handle trains more efficiently over the stiff grades of the Wasatch Mountain Range in western Utah.

Working with the American Locomotive Company (Alco) the Union Pacific (with significant help coming from the railroad's chief mechanical engineer of the time, Otto Jabelman) came up with the 4-6-6-4 wheel arrangement that proved to be a great blend of power and speed and worked well for the railroad.

After the initial #3900 proved its worth, UP went on to purchase a total of 105 of the Challenger Type with 252 in all built.

The Challengers were extremely powerful locomotives; #3985 was one of the last batch of 4-6-6-4s the railroad acquired from American Locomotive. 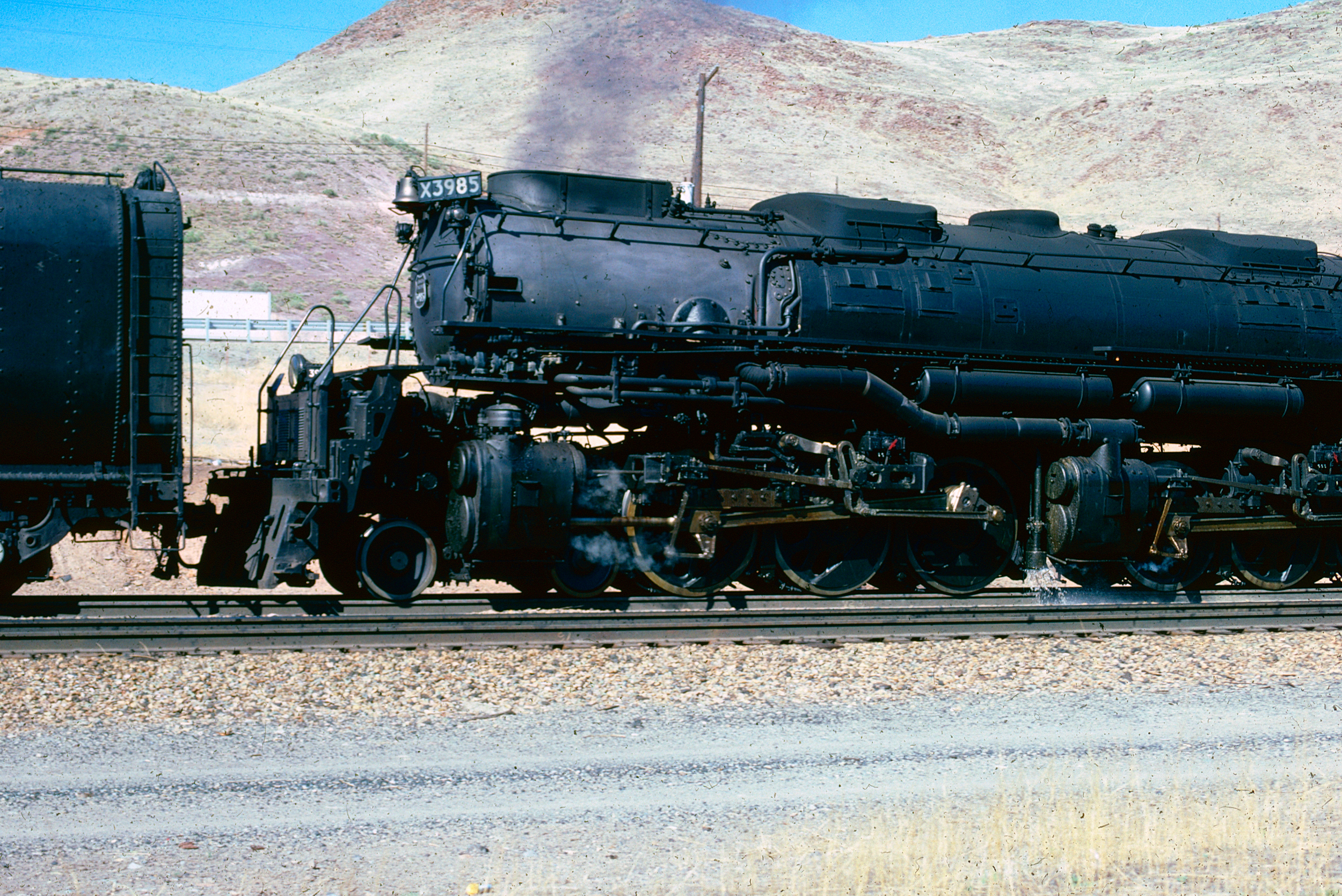 As such, it came equipped with the latest in steam locomotive technology, was heavier than its earlier sisters, and could produce more tractive effort at 97,350 pounds with a top speed of 70 mph.

Despite their massive length and weight the Challengers could handle expedited movements with ease and regularly cruised at over 50 mph in time freight service.

These final models were also more than ten-feet longer than earlier designs at nearly 122 feet!  Union Pacific classed their Challengers oddly; the first forty locomotives were classed CSA-1s and CSA-2s and were built between 1936 and 1937.

With the donation of the locomotive to RRHMA, it will most likely be a few years before #3985 is fully operational and back on the rails.  Stay tuned! 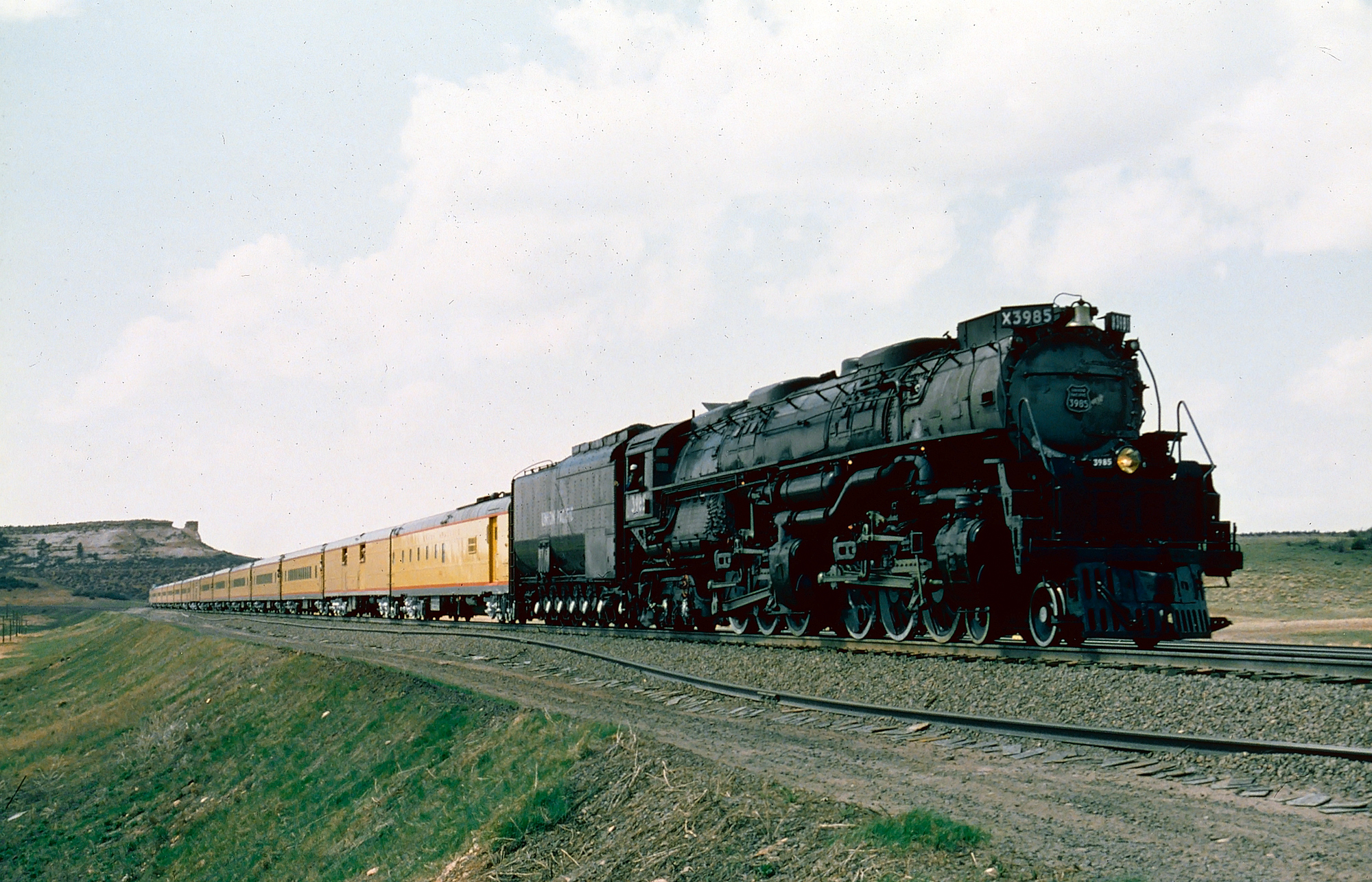 Still, this new classification was very simple with the "4664" designation stating the locomotive's wheel arrangement. In any event, for more information about UP's Challengers please refer to the chart below.

As was the case with many late model main line steam locomotives operating on other railroads, the Union Pacific's Challengers had a short operating life.

After retirement Union Pacific continued to keep the locomotive at the roundhouse until 1975 when it was placed outdoors beside the Cheyenne depot.

However, it did remain here long. In 1977 UP offered to restore the locomotive with the stipulation that the work must be a volunteer effort.

Union Pacific employed Hancock Inspirator Company's whistles on many of its locomotives, including all 4-8-4's, 4-6-6-4's, and 4-8-8-4's.  #3985 was fitted with the Hancock Long-Bell 3-Chime.  To learn more about this whistle please click here.

By 1981, with several UP workers helping with the project, one of the largest steam locomotives ever built again was moving under its own power.

To celebrate UP 3985's restoration the railroad sent the locomotive to Railfair 1981 at the California State Railroad Museum, along with sister #844.

Since the 4-6-6-4 has been used in regular excursion service across the UP system as part of the railroad's heritage collection, which is housed at the Cheyenne roundhouse although the Challenger does not see as much use as sister #844. In 1990 the 4-6-6-4 was converted from a coal-burner to using oil as its primary fuel source. 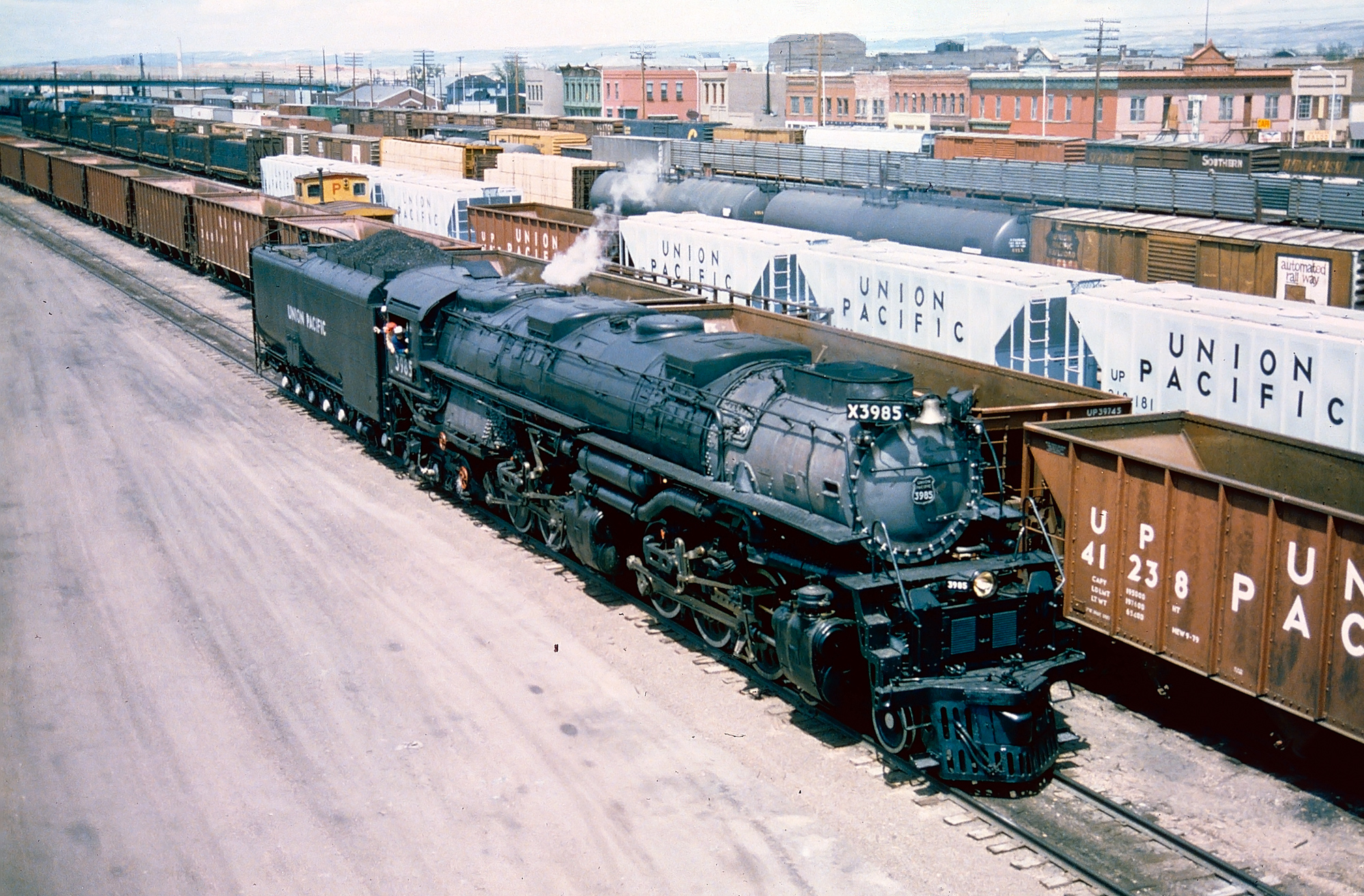 After negotiating the wye, Union Pacific 4-6-6-4 #3985 heads back east through the yard at Laramie, Wyoming, circa 1983. Mike Bledsoe photo. American-Rails.com collection.

It continued leading excursions and business trains across Union Pacific's system over the following two decades.

By 2010 it was in need of a major overhaul, which never came after an announcement was made in 2012 Union Pacific planned to restore 4-8-8-4 #4014 back to operating condition.

Ed Dickens, head of the steam program, announced in January, 2020 the Challenger was in need of a complete frame-up restoration itself, an investment the railroad was not willing to make at this time.  As a result, the locomotive will now remain stored inside the Cheyenne roundhouse indefinitely.

With the announcement on April 28, 2022 that the locomotive would be donated to Railroading Heritage of Midwest America (RRHMA), headed by Steve Sandberg, the big Challenger will again be active in excursion service.

The group plans to fully restore the locomotive using the old Rock Island shops complex that was recently acquired.  It will then join #261 and operate special trips from time to time.

In addition, RRHMA picked up Union Pacific 2-10-2 #5511 as well as DDA40X "Centennial" #6936.  The big Texas Type is also slated for a full restoration and host special excursions.