The 4-10-2 wheel arrangement, often referred to as the Southern Pacific for the railroad which put it to use most successfully, was a unique design that utilized three-cylinders instead of the traditional two.

In terms of steam locomotive evolution it followed the 2-10-2 Santa Fe but the American Locomotive Company's (Alco) desire to advance three-cylinder technology proved somewhat problematic, at least for the Union Pacific (which referred to its roster as "Overlands" for its Overland Route main line).

The SP on the other hand found their fleet quite useful and reliable in regular service.  They continued to operate 4-10-2's for nearly 30 years, until diesels finally displaced steam as main line power.

Of note was the one experimental example built by Baldwin Locomotive Works to commemorate the completion of its 60,000th locomotive.

Unfortunately, engineers were never able to work out its problems and the design was never duplicated.  Today, two examples of this rare wheel arrangement are preserved. 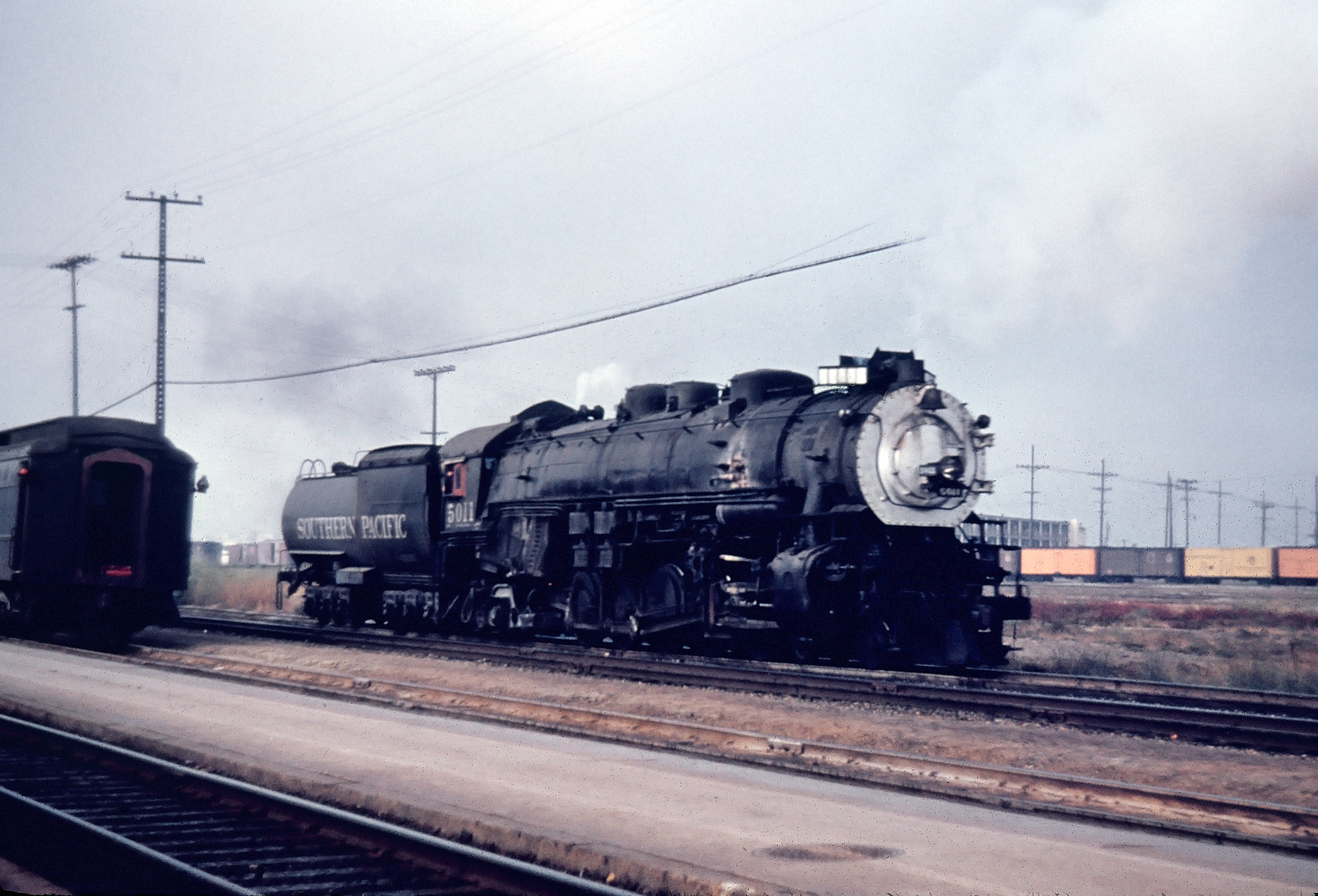 The unique 4-10-2 Southern Pacific/Overland was, in many ways, an experimental design.  By the 1920s steam locomotive development was becoming quite advanced with powerful models like the 2-8-4 Berkshire, 4-8-4 Northern, 2-10-4 Texas, and 4-8-2 Mountain either already in service or conceived during the decade.

It was Alco's belief that a steamer featuring three cylinders would offer more power under a more efficient platform.  To do so the manufacturer took a basic 2-10-2 Santa Fe and added an extra axle on the pilot to compensate for the additional weight of the third cylinder.

The locomotive would be a simple expansion version and the Espee was quite impressed with the design, ordering 16 examples in April of 1925 numbered 5000-5015.  The railroad saw the 4-10-2s as useful power for passenger trains tackling Donner Pass.

While less impressed the Union Pacific took delivery of its first 4-10-2 following the SP, #8000, in May of 1925.  The UP's hope, however, was have the design replace its fleet of Class TTT 2-10-2 Santa Fes (of which it rostered more than 100 among seven different classes).

The UP soon took delivery of nine more units, #8800-8808, and put them to work on the LA&SL Division (Los Angeles & Salt Lake Railroad) between Salt Lake City, Utah and California.

All ten were listed as Class FTT-1 and during the 1930s converted to burn oil instead of coal.  Unfortunately, despite their advantages and offering 4,300 horsepower the Overlands proved very complicated to maintain due to their third cylinder. 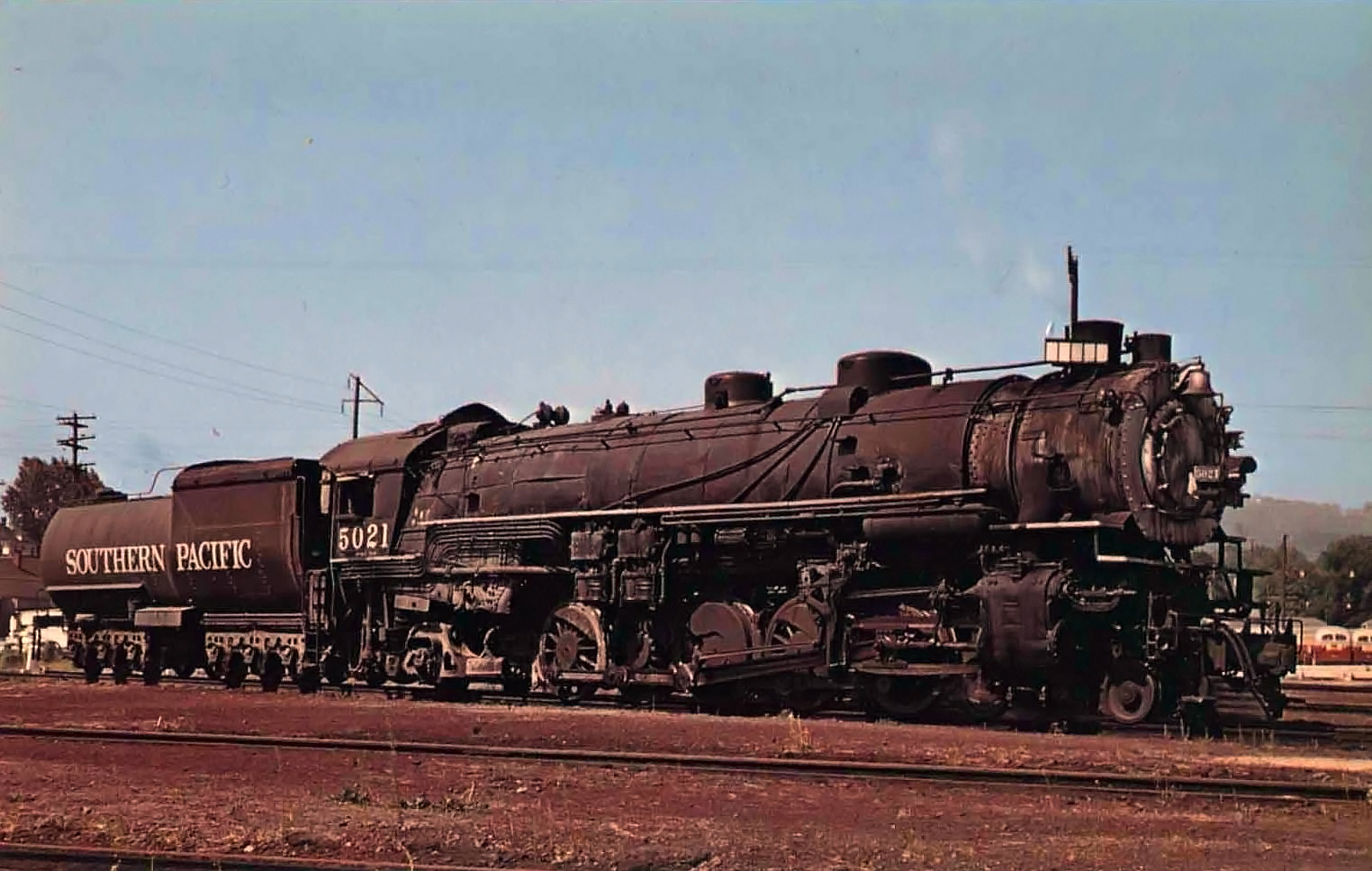 In 1942 the UP became tired of this headache and reduced the locomotives to operate with a conventional two-cylinder setup for easier maintenance, renumbering the 4-10-2s #5090-5099.

Here, the locomotives were somewhat more successful, remaining in service until the 1950s.  As it turns out the SP also ran into some problems with their 4-10-2s early on; the locomotives proved to be too long and rigid (they were not articulated) to successfully negotiate the tight curves of Donner Pass.

As such, the railroad reassigned the units to its Sunset Route between California, Arizona, and New Mexico where the track was much straighter and the locomotives could normally move heavy trains at speeds of greater than 30 mph.

Despite the complicated nature of three-cylinder steam the Southern Pacifics remained in regular service until the 1950s when they were finally replaced by diesels.  Interestingly, the Baldwin Locomotive Works also built their own version of the 4-10-2 in 1926.

This unit was listed as #60000 by the manufacturer to celebrate its status as the 60,000th locomotive the company had built during its many years in the business.  The hope of #60000 was, in many ways, similar to Alco's attempt by further pushing the boundaries of steam locomotive technology offering a more efficient and powerful design.

Unfortunately, Baldwin made the mistake of building the locomotive as a compound expansion design when most railroads were moving to simple expansion versions.

* Union Pacific would later overhaul these locomotives in 1942 by removing the third cylinder and installing Walschaert valve gear.  They were renumbered 5090-5099.

The #60000 would test on several major railroads including the Baltimore & Ohio, Erie, Pennsylvania, Burlington, Santa Fe, Great Northern, and again the Southern Pacific.

However, none found the design to their liking (even with new features like pneumatic braking and a double boiler, the latter of which also proved troublesome); it was too complicated, too heavy, and too long to operate anywhere except along the straightest and most robust main lines.

After seven years of trials Baldwin gave up on the unique design and sold the locomotive for a mere $1 to the Franklin Institute Science Museum in Philadelphia in 1933, where she still remains today on display.  Additionally, you can also see Southern Pacific Class SP-2 #5021 on display at the Los Angeles County Fairplex in Pomona, California.