The 4-4-0 American can be given overwhelming credit, more than any other steam locomotive design before or since its development, for helping the United States flourish beginning in the latter half of the 19th century.

After their debut and minor refinements the 4-4-0 wheel arrangement quickly proved its superior ability over all other types of its day and by the 1870s well over three-quarters of all steam locomotives operating in the country at that time were American Types!

While the railroads themselves built our great nation into what it has become today, their initial workhorse in achieving that task was certainly the 4-4-0.

While the wheel arrangement started out small, by the late 19th century there were larger designs being produced. Still, the design simply became technologically outmatched as trains became heavier and heavier. Due to the thousands of Americans built over the years, even today several can still be found both preserved and in operation. 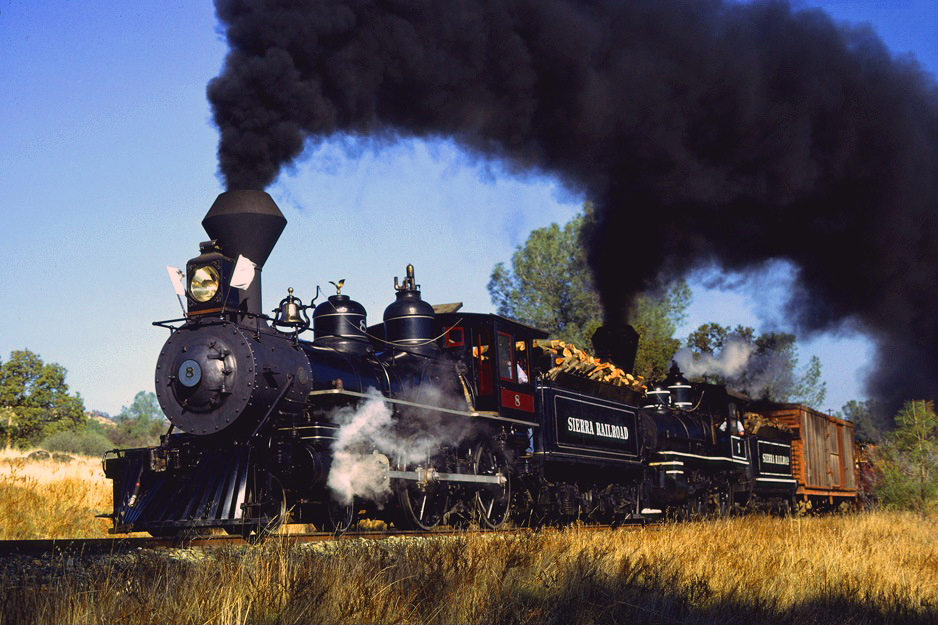 Sierra Railroad 4-4-0 #8 (originally owned by the Dardenelle & Russelville Railroad) double-heads with 4-6-0 #3 powering a photo freight up the Woods Creek grade near Jamestown, California during October of 1979. Drew Jacksich photo.

The American Type has its beginnings dating as far back as 1836 when Henry Campbell developed the 4-4-0 wheel arrangement. Up until the time of Campbell’s new design steam locomotives offered not only little horsepower but also they tended to be unreliable.

Of course, this is partly due to the fact that the industry was still mostly in its infancy and steam locomotive designs and technology were just under way with now famous models like the Best Friend of Charleston (an 0-4-0 design), Stourbridge Lion (an English-built 2-2-0), John Bull (an early 4-4-0, which also came from England), and the Tom Thumb (a very crude, albeit historically significant, 2-2-0 design) leading the way. 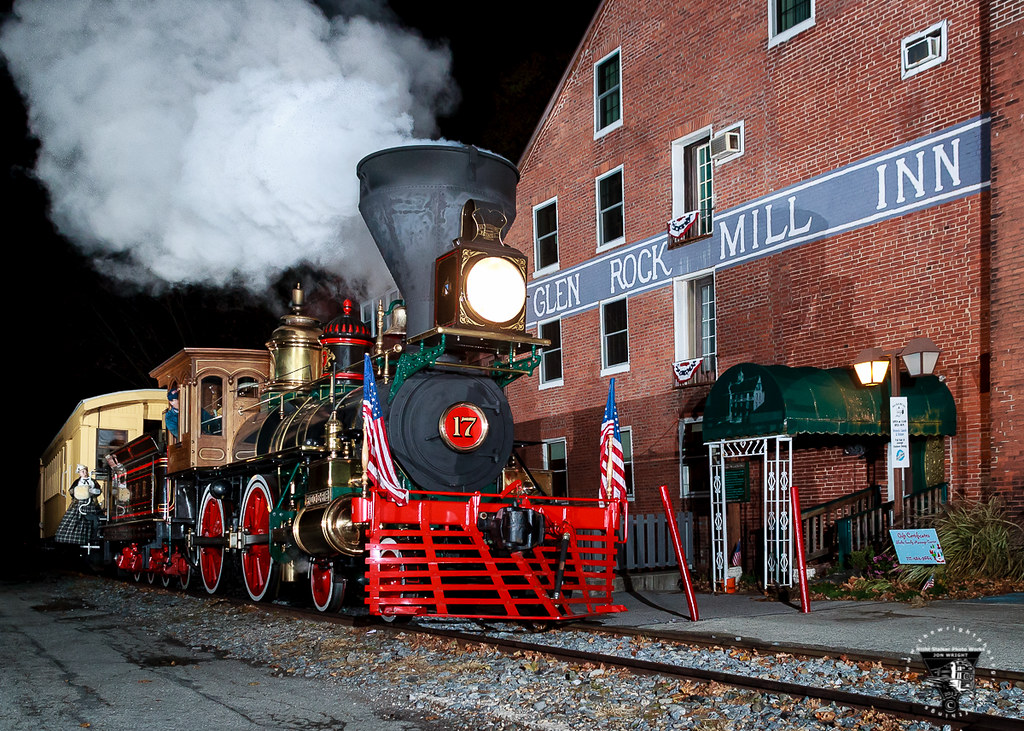 America's newest 4-4-0 is this little gem, #17, manufactured by the Kloke Locomotive Works in 2013. Also known as the "York" the locomotive is owned by Steam Into History, Inc. and is seen here at the Glen Rock Mill Inn in Glenn Rock, Pennsylvania on November 16, 2013. Jon Wright photo.

Not only did the new American Type offer much better horsepower, tractive effort, and reliability it also signaled the way steam locomotives were to forever be built in the future with the boiler mounted horizontally and a smoke stack situated at a ninety-degree angle to the boiler at the front of the locomotive to expel the smoke and cinders.

The 4-4-0 design also featured greater protection for train crews with an entirely enclosed cab (save for to the rear) on the back of the boiler.

Essentially, the American standardized many steam locomotive designs that would become common fixtures on future models (other features would include things like cowcatchers, front-mounted headlamps/lights, etc.). 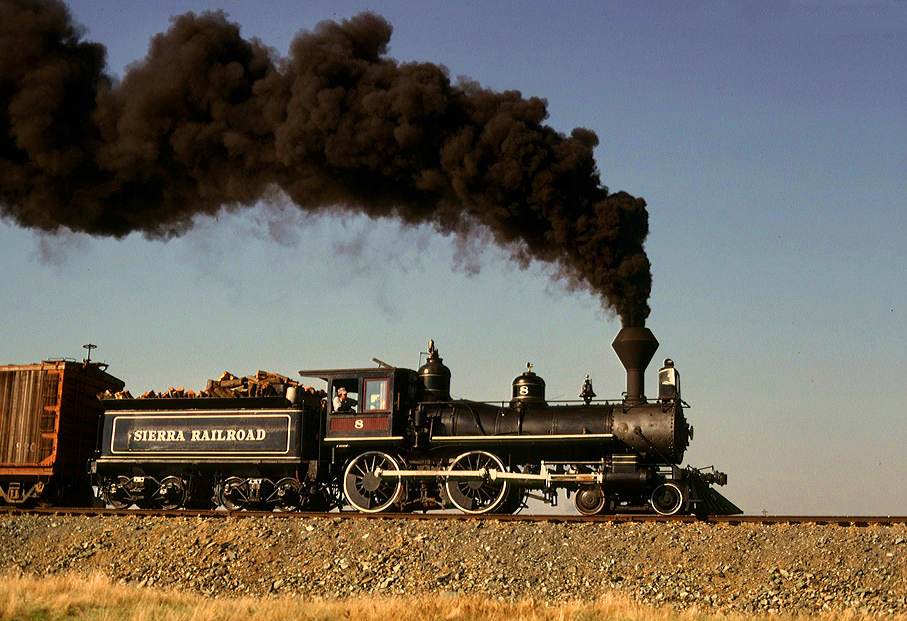 Another view of "Sierra" #8 shows the steamer billowing lots of smoke for show as it pulls a photo freight away from Warnerville during the fall of 1979. Drew Jacksich photo.

The American's increased power and tractive effort enabled railroads and manufacturers to build larger and heavier freight and passenger cars, which allowed more money to be made per train (it also resulted in the need for heavier rails to support the increased weights).

While Campbell originally thought up the 4-4-0 design in the United States he was not the first to successfully capitalize on it (initially, that is, he would later sue on infringement to his patented design).

He originally included in the design a rigid front truck (instead of one that could freely swivel, as later became common practice), which could not successfully negotiate curves in the rails, particularly during those days when track construction was typically shoddy, at best.

The Eastwick & Harrison Company beat him to the punch on this much needed design improvement, delivering its first, the Hercules to the Beaver Meadow Railroad in 1837.

In the subsequent years the American Type was improved upon and featured better traction, power, and an overall larger design (such as an increase in its boiler size).

The 4-4-0 design proved to be just what the railroads needed during the latter half of the 19th century in their quest to build west and move larger and heavier trains.

While Americans quickly lost their luster during the final decade of the 1800s as more powerful locomotives took their place such as Ten-Wheelers (4-6-0) and Consolidations (2-8-0) they had done their duty in pioneering steam locomotive design and development (some 4-4-0s remained in service into the 1940s!).

Interestingly, some railroads continued to employ their older 4-4-0s in service (usually as switchers or in secondary service) while smaller short lines found them useful in everyday applications through the end of the steam era in the 1940s and 1950s.

In the end, virtually every road both large and small that ever operated from the 1850s forward owned at least one American, a testament to just how utilitarian these locomotives were with thousands upon thousands manufactured from a wide range of builders (names like Rogers, Cooke, Norris, Stevens, Portland and of course the "Big Three" of Baldwin, Lima, and Alco). 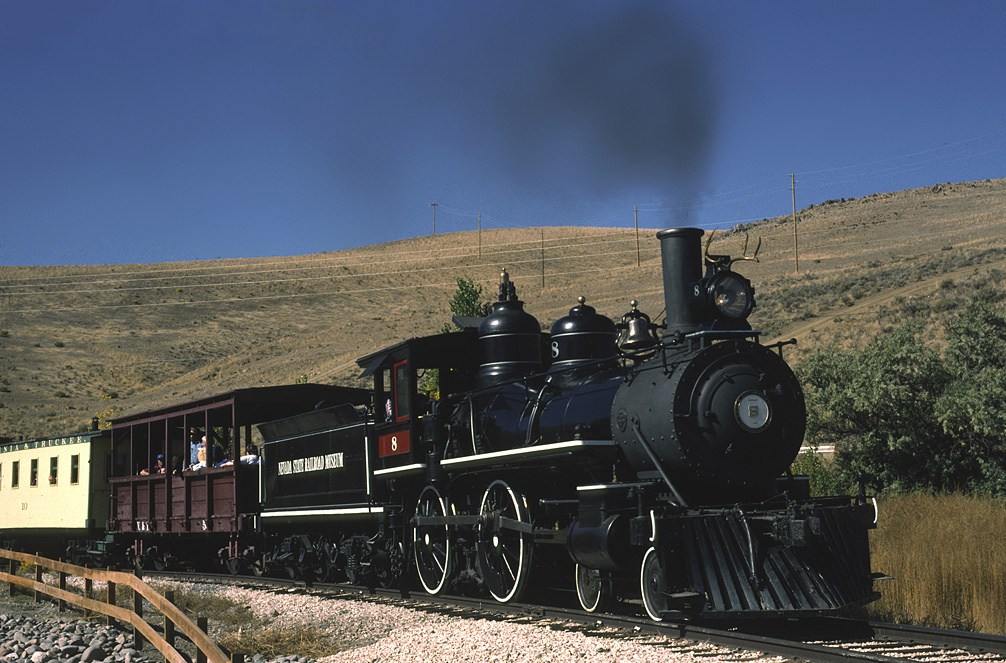 This view of #8 depicts the American pulling an excursion on the Nevada State Railroad Museum October, 1994. Drew Jacksich photo.

Today, several American Types have been preserved and a few even remain in operation! One of the most famous is Baltimore & Ohio Railroad #25, the William Mason fully restored and operational it is bedecked in a beautiful dark green livery and gold trim.

Another well known operating American Type is Central Pacific Railroad #60, the Jupiter, which is likewise adorned in a classic livery of bright red and blue with a black boiler and stack.

Other surviving 4-4-0s include Wilmington & Western #98 (operational) and Pennsylvania D16 #1223. These are not all of the surviving Americans, of course, but some of the more well known examples. For every 4-4-0 operational there are many more preserved on static display.