The decade of the 1920s saw the rise of the super-power steam locomotive (meaning, designs with high capacity boilers, modern valve gear, and two-axle trailing trucks) with the development of such wheel arrangements as the 2-8-4 "Berkshire" and 4-8-4 "Northern."

Another of these was the 2-10-4, which saw service on nearly a dozen different major railroads.  Texas & Pacific #610 was one of several the railroad owned.

It operated until the early 1950s when it was retired and likely would never have been used again had it not been for the American Freedom Train during the mid-1970s.

Here, the locomotive was restored for the special bicentennial train and later went on to pull excursions along the Southern until its second retirement in the 1980s.

Unfortunately, she hasn't enjoyed as much fame as another locomotive which pulled the train, Southern Pacific 4-8-4 #4449, which has remained operable ever since.

This is due, in part, to a lack of available areas to operate the locomotive.  Today, #610 cane be found on display at the Texas State Railroad. 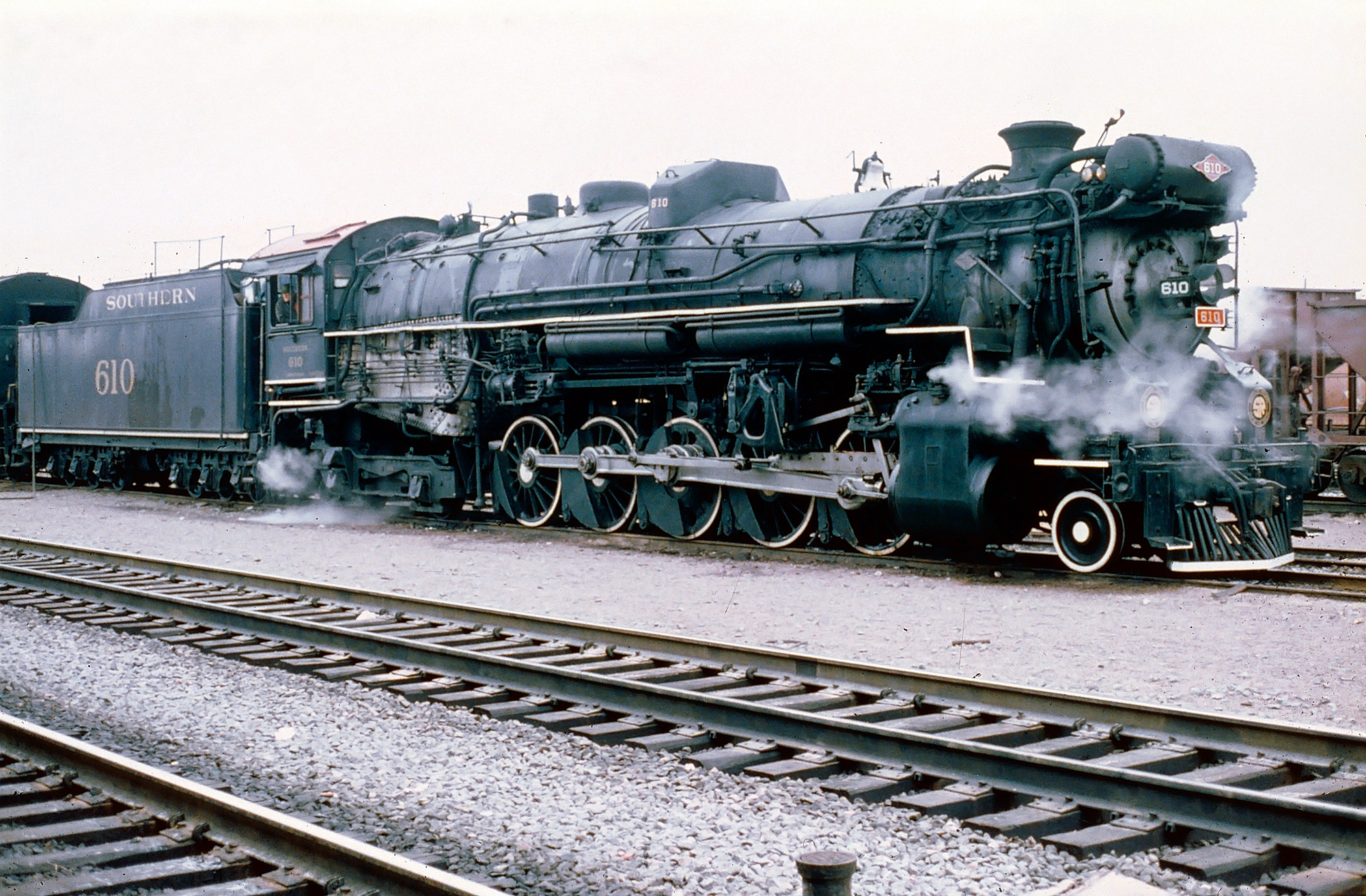 Texas & Pacific 2-10-4 #610, masquerading as Southern #610 during her time with the steam program, at Texarkana, Texas in 1978. Mike Bledsoe photo. American-Rails.com collection.

The Texas & Pacific Railway was a long-time subsidiary of the much larger Missouri Pacific and constituted much of its parent's reach across Texas and into southern Louisiana and Mississippi.

While the MP controlled the system from the 1920s onward it remained more or less independent for many years following.  The history of T&P #610 begins with the creation of a new steam locomotive type, the 2-10-4 first used on the Santa Fe in 1919.

At this time the AT&SF took some of its 2-10-2 "Santa Fes" and had the Baldwin Locomotive Works rebuild them into 2-10-4s.  Overall, the railroad was unimpressed with what it had created and did not further pursue the design.

A few years later the T&P approached the Lima Locomotive Works to again attempt to develop a usable locomotive that carried the 2-10-4 arrangement.

What emerged in 1925 was the first group of ten the T&P would operate, numbered 600-609 and given Class I-1.  Because the Texas & Pacific was the first to put a true 2-10-4 into service it was given the honor of naming the wheel arrangement and chose "Texas."

These new steamers were also one of the first "Super Power" locomotives, a designation given to late-era designs that combined a high-capacity boiler with modern valve gear and a four-axle trailing truck (to support much larger fireboxes that could heat larger boilers, thereby producing more steam, and ultimately power).

Ironically, while Lima is often considered the smallest steam builder in terms of the shear numbers it produced the company was on the forefront in developing these modern locomotives, paving the way for how all future steamers would be constructed until the diesel age arrived in the late 1930s. 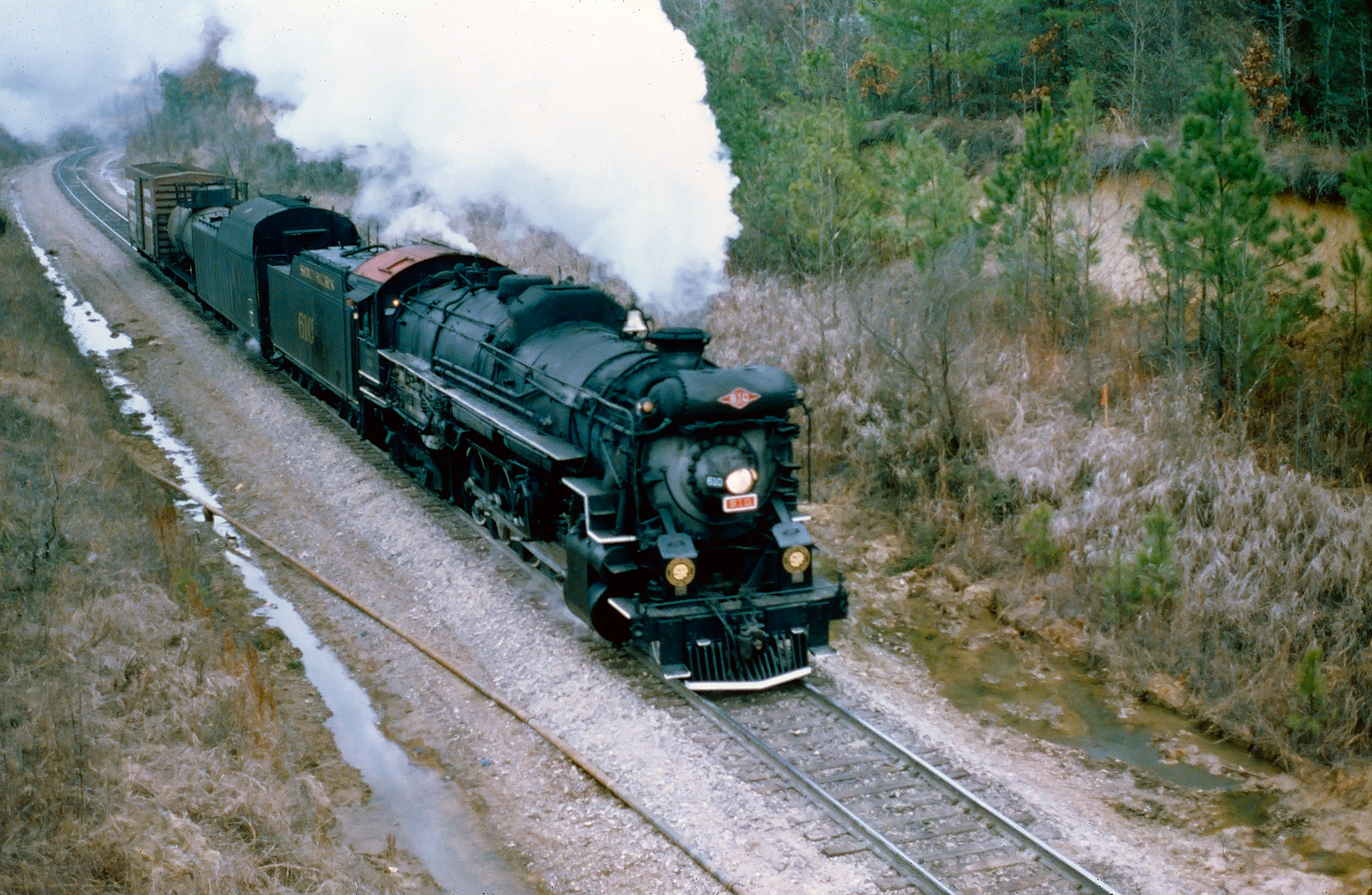 Texas & Pacific 2-10-4 #610, masquerading in Southern markings during its time hosting excursions on the railroad, is seen here circa 1980. Mike Bledsoe photo. American-Rails.com collection.

Their classes were broken down into five different groups, with a sixth the result of a conversion.  During the late 1940s the railroad upgraded three (608, 657, 666) with roller bearings from the Timken Roller Bearing Company, which greatly reduced maintenance and wear.

After the conversion those steamers were reclassified as I-2.  Had it not been for the arrival of the diesel during the same time in all likelihood the T&P would have upgraded more with roller bearing technology.

Despite the fact that the T&P's 2-10-4s would experience counterbalancing issues at times due to their relatively small drivers (63 inches) overall they performed quite well in service pulling significant tonnage and were the largest steamers the T&P ever operated.

One notable feature was the small tank (that almost looked like an air compressor) which sat atop the smokebox giving the locomotive a huskier appearance.

This device was a feedwater heater (supplied by Elesco) that warmed water from the tender (which normally was either cold or room temperature) before transferring it directly into the boiler, which of course was already at boiling point.

This improved the locomotive's efficiency by not requiring the boiler to expend additional energy in heating this water.

The locomotive features its original Texas & Pacific whistle, which is similar to a Hanock 3-chime.  Hopefully the locomotive will again enjoy a full restoration to the public can hear this unique whistle.

By the early 1950s steam on the T&P was coming to a close and it began retiring its remaining fleet of 2-10-4s.  During 1951 #610 was donated to the Fort Worth Fat Stock Show where it sat on display for seventeen years before it was acquired by David Pearson in 1968.

During 1975 Ross Rowland was scrambling to find equipment for his American Freedom Train concept.  Thanks to a wealthy associate of Mr. Pearson, which offered to restore #610 for use on the special bicentennial excursion, the locomotive was given a new lease on life.

During 1976 it was overhauled and fully restored in Fort Worth.  Later that year it began hauling the widely popular and successful train throughout the Southwest and became an instant hit with both railfans and the general public.

Following a year of excursions pulling the American Freedom Train #610 would remain in the spotlight when the Southern Railway leased the 2-10-4 for use on its own company excursions beginning in February of 1977.

During this time the locomotive continued pulling special trains throughout the South until January of 1981 when the railroad returned #610 to its owner.  After this time she remained serviceable but was not used on additional excursions due to her size and the expense of operating such a large steamer.

Finally, during 1987 Texas & Pacific #610 was formally donated to the Texas State Railroad where she still resides, out-of-service at the shops in Palestine.  It is unlikely that the locomotive will be returned to operational status throughout the foreseeable future.