The DS-4-4-660 was Baldwin's replacement for its earlier VO660 design. The two models were very similar with the primary difference being the newer version's updated prime mover.

It featured the 606NA (Normally Aspirated) in place of the earlier, VO variant.  The six and eight-cylinder versions of this power plant were used extensively in Baldwin's diesel line throughout the 1940's.

Today, at least three DS-4-4-660s are known to be preserved; Morrisey Femie & Michel #1 at the Western Pacific Railroad Museum, Sloss-Sheffield Steel #30 at the Sloss Furnace Museum, and Chesapeake Western #662 at the Virginia Museum of Transportation. 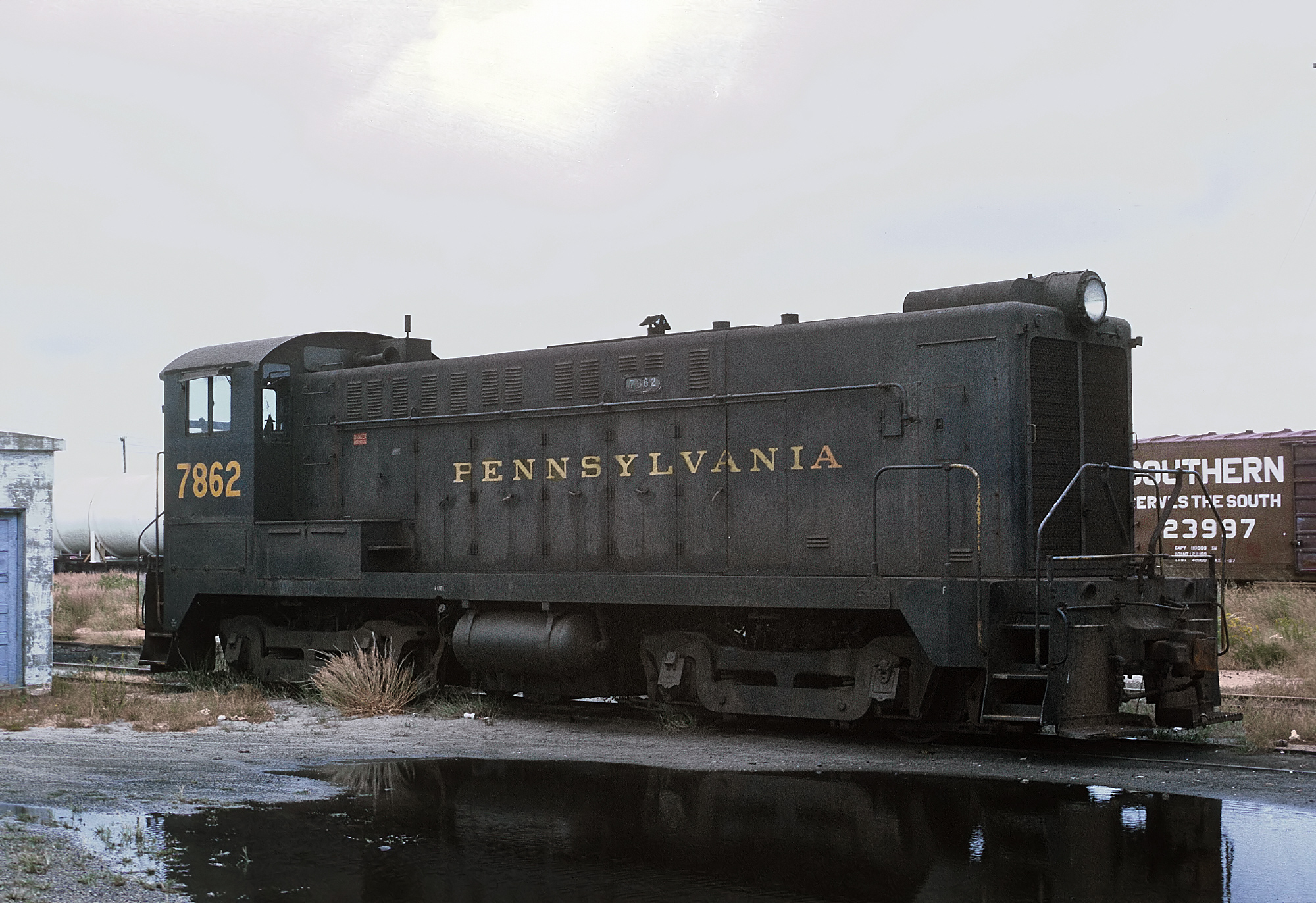 Penn Central DS-4-4-660 #7862, still wearing its Pennsylvania heritage, is tied down at Little Creek, Virginia on September 20, 1969. This was the furthest south the PRR network reached. Roger Puta photo.

The DS-4-4-660 debuted in 1946, right after the builder canceled its VO660 line. Using a model 606 NA prime mover developed specifically by Baldwin (although the engine was essentially an advancement of the engines produced by I.P. Morris and De La Vergne) the DS-4-4-660 featured the standard four-axle, B-B truck setup.

As with almost all of its diesel models, Baldwin contracted with Westinghouse to supply internal components such as traction motors, generators and air equipment (brakes and compressors).

After Baldwin began manufacturing its own prime mover it reclassified its diesel models according to their type (such as road switcher, switcher, transfer, etc.) total axles, powered axles, and finally horsepower.

As the company began to release future designs they further shortened and simplified the classification system.

This "updated" version of the original VO660 sold relatively well, at least for a Baldwin product, with railroads as more than 280 were built through May of 1949.

The model would probably have sold better but with Baldwin already offering the more powerful DS-4-4-1000 design most railroads preferred it instead.

The transition from the model VO-660 to the DS-4-4-660, and all "DS" series switchers, was not necessarily a clear-cut break in differing models.

As John Kirkland explains in "The Diesel Builders: Volume Three," Baldwin was attempting to hurry development on its new, stand-alone diesel engine during World War II.

With the War Production Board's blessing it was able to carry out research and development, eventually unveiling its 600-series engine.

This new prime mover was an update to De La Vergne's trouble-prone VO variants.  The latter had caused railroads to lose faith in Baldwin's ability to catalog a rugged and reliable locomotive in the diesel era

The quality Baldwin offered in its DS-4-4-660 helped it sell as many units as it did, along with its ability to pull just about anything.

At 48 feet in length, the same size as its earlier counterpart, also made it an attractive locomotive for industries with companies like Armco Steel, American Cyanamid, Morrissy Fernie & Michel, and others purchasing at least one.

Production on the locomotive ended in May, 1949 as the model was replaced by the slightly more powerful DS-4-4-750.