The S-8 was Baldwin's first diesel switcher as part of its latest Standard Line.  It specifically replaced the earlier "DS" line and the DS-4-4-750.  The latest model offered a slight increase in horsepower (50 hp).

The switcher itself was not considerably different from its earlier counterpart although it did feature an upgraded prime mover of the same version used in the DS-4-4-750.  Baldwin simply dropped the "Normally Aspirated" (NA) title.

Perhaps the most noticeable change was merely the S-8's designation, as the Baldwin looked to simplify its earlier classification system of complicated numbers, dashes, and letters. Overall, the S-8 was not particularly successful although its successor, the S-12, did see decent sales.

One railroad which never wavered on Baldwin was the Pennsylvania; the PRR was a loyal buyer of steam locomotives practically from its inception and continued supporting the company until the end.  It acquired a small roster of six S-8's. 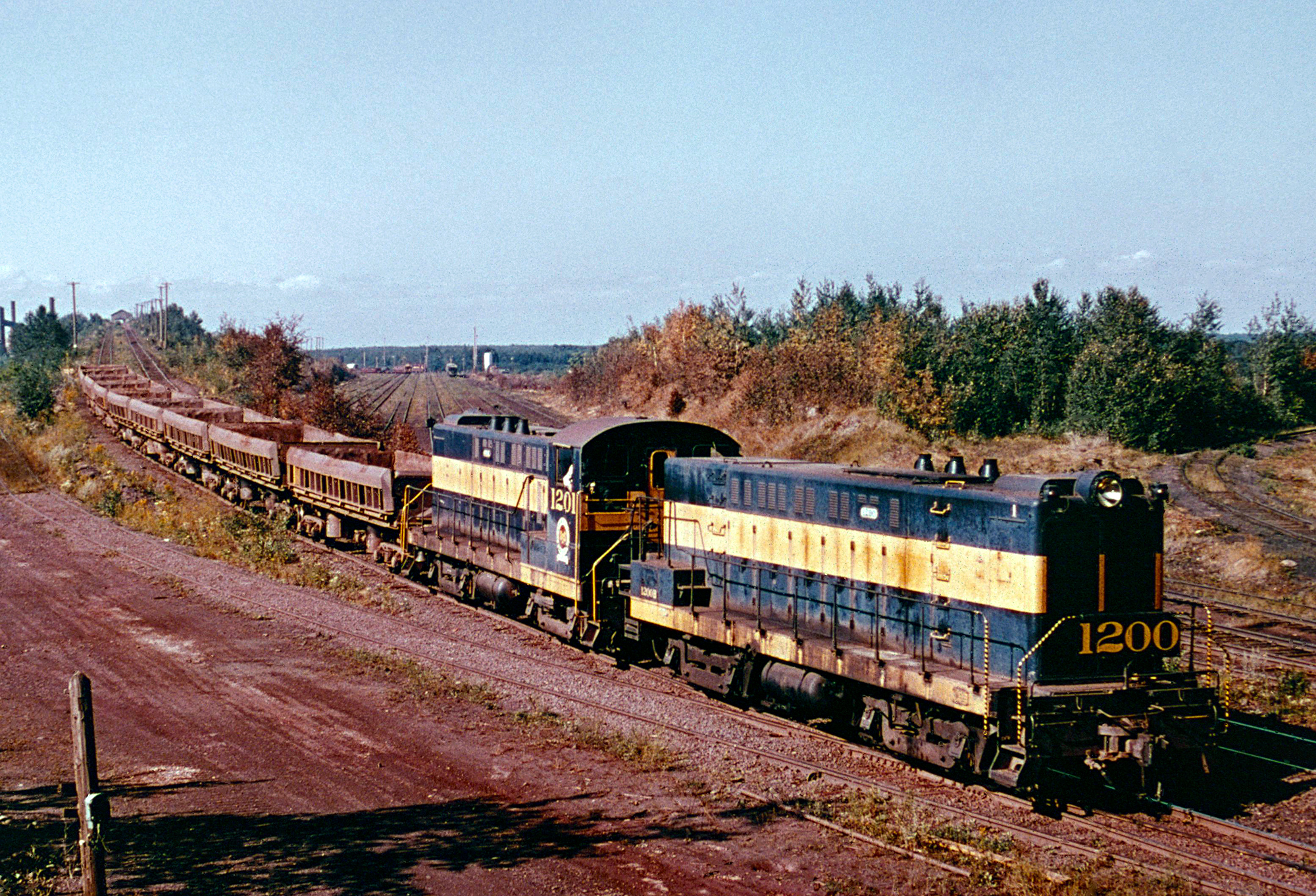 Oliver Iron Mining Company S-8's #1201-A and #1200-B push a string of side dump cars up the slope and toward the mine at Virginia, Minnesota on August 18, 1970. Jim Jeffery photo. American-Rails.com collection.

Overall Baldwin designed the S-8 as a standard yard switcher although sales never truly materialized. Railroads still preferred more powerful models and the company had a difficult time finding orders for any of its lightly powered designs like the VO660, DS-4-4-750, and the S-8.

Of course, this was not unique to Baldwin. The American Locomotive Company, for instance, also saw only lukewarm sales for its small switchers such as the S-1, S-3, and S-6.

At 48 feet in length the S-8 was nearly identical to the DS-4-4-750 using the same basic frame and design (end cab and long trailing hood).

The one operational standout, aside from its extra 50 horsepower was the additional tractive effort; 59,550 pounds starting and 34,000 pounds continuous.

This gave the locomotive the ability to pull a string of loaded cars with relative ease while being agile and light enough (just 100 tons) to be used almost anywhere. Because of this, several industries found the S-8 to their liking.

By the time production had ended Baldwin was able to sell 65 total units (56 A units and 9 B units/calves) to a wide range of buyers.

While Class I railroads purchased the S-8, such as the Pennsylvania and Rock Island, many buyers turned out to be industrial operations like mining and steel companies.

As John Kirkland notes in his book, "The Diesel Builder: Volume Two," the S-8 was essentially the DS-4-4-750 with an additional 50 horsepower and dropping the prime mover's designation from 606NA to simply 606.

One particular note of interest about the S-8s were the nine cow-calf sets purchased by Oliver Mining. Oliver was the only buyer to request such a setup (it also ordered other cow-calf sets from Baldwin).