The AS416 was part of Baldwin's new Standard Line released in the early 1950s. This unit was meant to replace its earlier predecessor, the DRS-6-4-1500, and came equipped with slightly more horsepower.

Of the final four road switcher models Baldwin produced the AS416 sold the poorest, outshopping less than 30 units, all of which went to smaller roads located in the South, and one foreign line in Africa.

From the outset of the company's road switcher line, which debuted in 1946, used the same basic carbody design; a short high hood, offset cab, and trailing long hood.

Overall the style was actually quite pleasing with slight beveled edges and a flush roof line.

Today, two of these rare beasts are known to be preserved; Columbus & Greenville Railway #606 is at the Illinois Railway Museum while original Norfolk Southern #1616 can be found cosmetically restored at the North Carolina Transportation Museum. 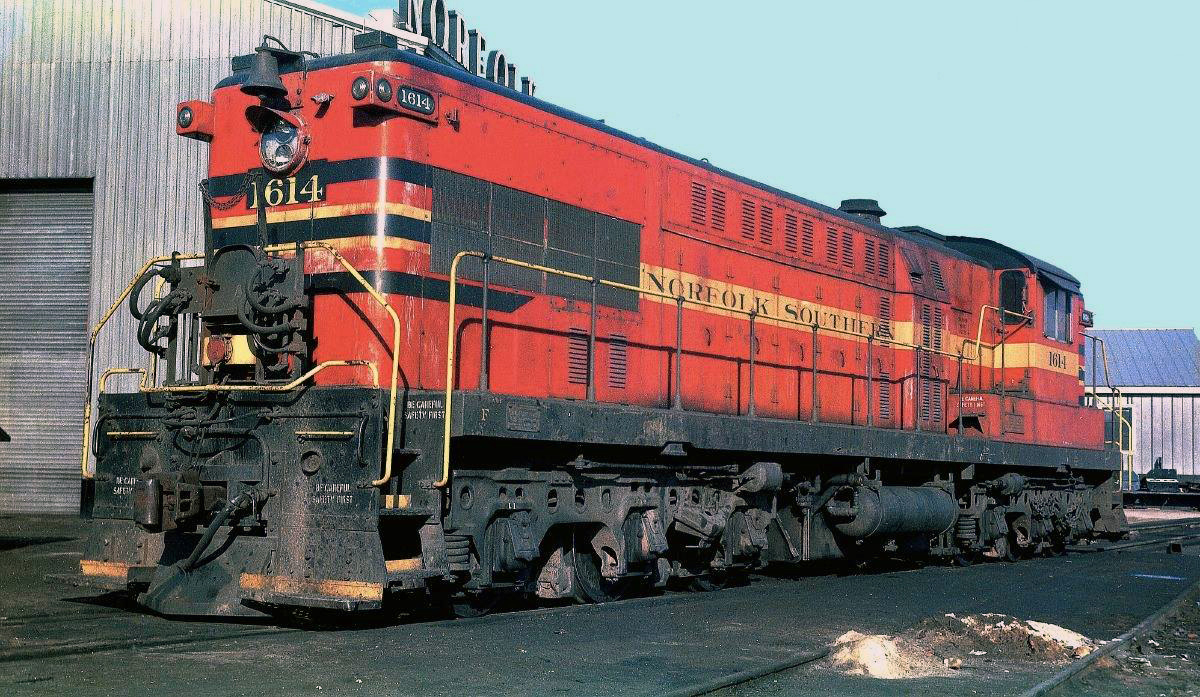 Norfolk Southern AS416 #1614 wears the road's original livery of red with black and yellow pinstripes. It is seen here in Raleigh, North Carolina during the 1960s. Warren Calloway photo.

Compared to the company's early road switcher models the locomotive featured a much simpler classification system similar to models then in production by American Locomotive (Alco) and Electro-Motive (EMD).

While easier to understand there was a more practical reason for BLH to update its classification system; in 1949 it had completely shutdown its steam locomotive line and began focusing solely on the development of diesels.

As such, the old Whyte notation that had carried over into Baldwin's early diesels was no longer needed.

The new numbering system for the Standard Line was as follows for the AS416:

Overall, the AS416 featured an A1A-A1A truck setup (meaning the two outside axles on each truck were powered while the center axle was unpowered).  Additionally, using Baldwin's latest 608A model prime mover.

In the end, only three domestic railroads purchased 25 units (including four purchased by an Algerian railway):

Had it not been for Norfolk Southern's order, Baldwin would have sold hardly any of the diesels.

In any event, it is interesting to speculate how successful Baldwin-Lima-Hamilton may have become as the 1950s gave way to the 1960s had Westinghouse allowed the builder to remain in the market.

Several design changes to the AS-416 were carried out with the final two units produced, Norfolk Southern #1616-1617.  At this time, Westinghouse electrical equipment was dropped in favor of General Electric.

This included a GT590 main generator, GMG166 auxiliary-exciter generator, and GE752 traction motors (4).  In addition, the locomotive's length and weight was increased to the following:

The company's management in the early 1950s wanted to become a more serious and competitive diesel locomotive manufacturer but its parent believed it could not do so.

As a result, one of the icons of locomotive manufacturing, dating back to the early 19th century, exited the business quietly in 1956.

Lastly, for more information about the AS416s please refer to the chart above for a complete production roster of the model.