As  John Kirkland notes in his book, "The Diesel Builders: Volume Three (Baldwin Locomotives Works)," Eddystone never made a concerted effort to challenge Alco's success in this market with its popular RS-1.

Baldwin had a built a few 1,000 horsepower road-switchers (DRS-4-4-1000) for a few North American lines (Tennessee Central, Canadian Pacific, and Pennsylvania) but by and large stayed out of the market.

When the company upgraded its road-switchers with the 608A prime mover, it increased the DRS-4-4-1000 by 200 horsepower and renamed it the RS-12.

Baldwin put more effort into marketing this new variant but by the 1950s railroads were looking for greater power in an over-the-road locomotive.  As such, the RS-12 saw few sales.

Today, there are several RS-12's preserved, most of Seaboard Air Line heritage; in addition, McCloud River Railroad #33 (only one of two built with dynamic brakes) can be found at California's popular Skunk Train while short line freight carrier Escanaba & Lake Superior owns eight units (all of Seaboard heritage). 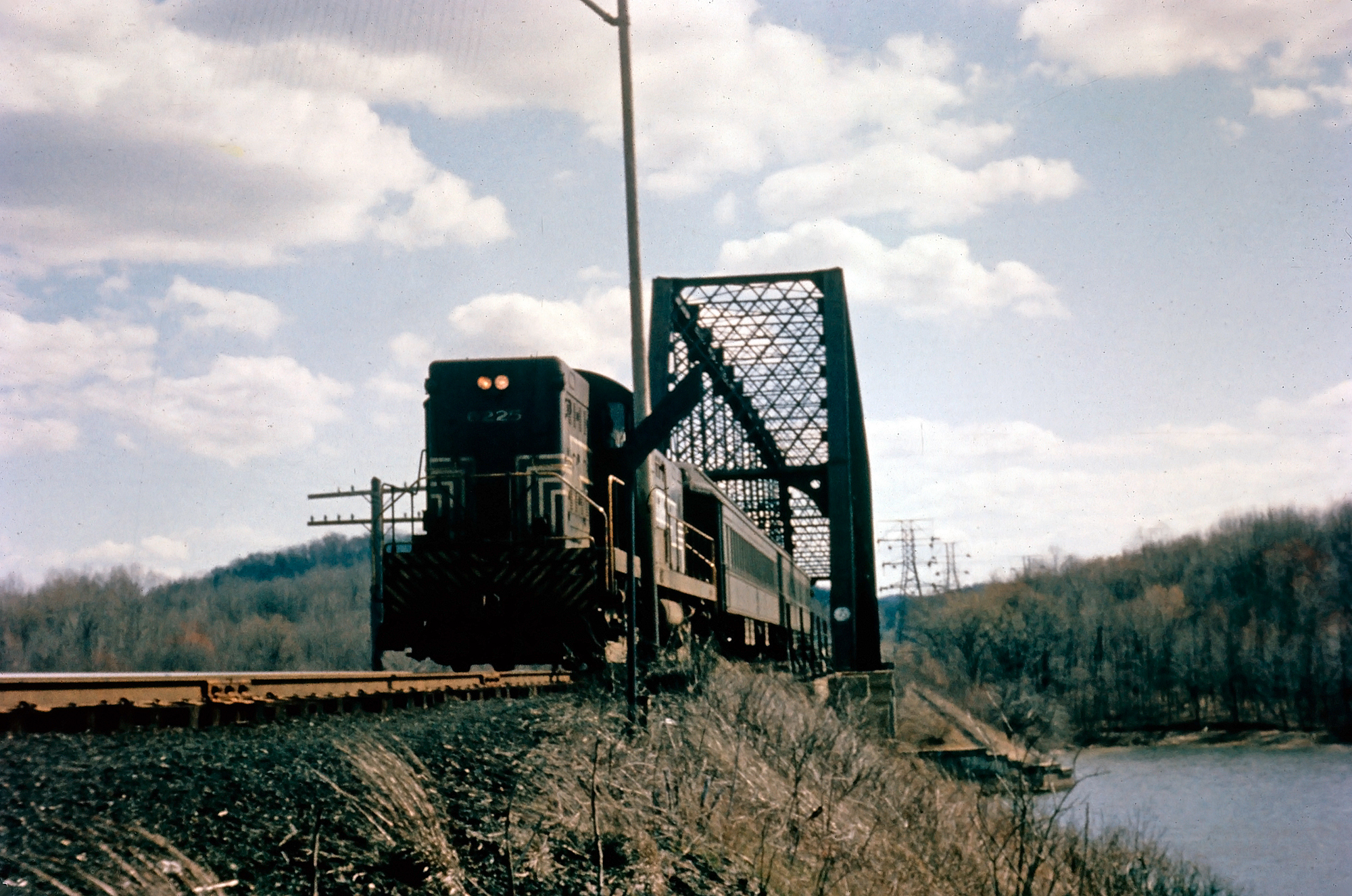 The RS12 was Baldwin's lone light road-switcher the builder attempted to market although it appears to have been largely a half-hearted effort.

Incidentally, Baldwin's success in the diesel market began with a line of switchers and it had been producing small electric locomotives, such a various box cab designs, for years in conjunction with Westinghouse.

The RS12 was one of four road switcher models Baldwin-Lima-Hamilton offered in its new Standard line released in 1950.

These new locomotives sold far better than the company's earlier designs of the 1940s and one cannot help but wonder how successful BLH would have become had parent Westinghouse allowed it to continue refining its diesels. 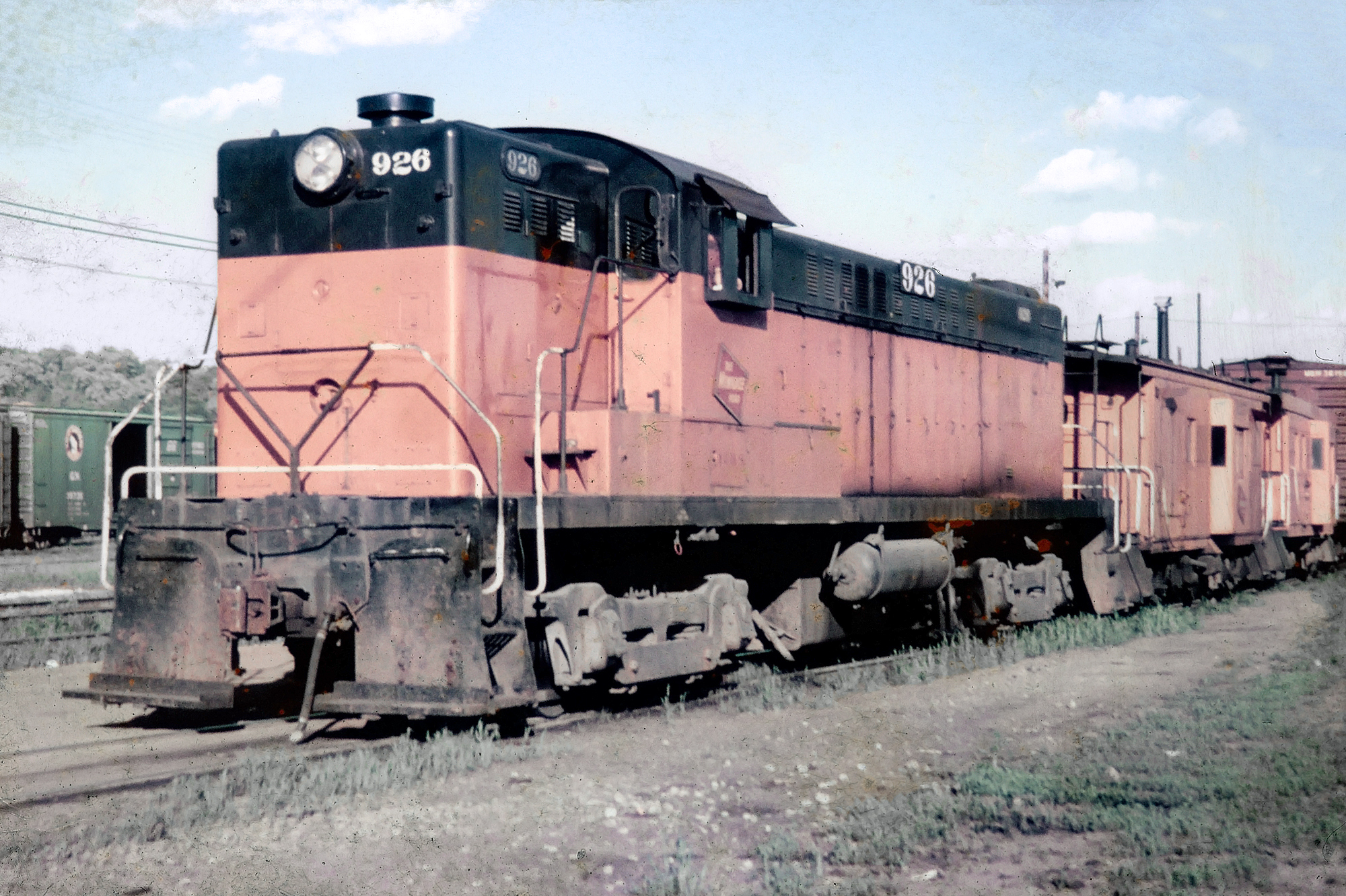 In any event, BLH's new classification system was fairly straightforward and certainly much easier to decipher than its earlier system, partially based from the steam era.

In the case of the RS12 the "RS" referred to Road Switcher while the "12" regarded its 1,200 horsepower (the model was actually even easier to understand than the AS16, AS416, and AS616 classifications). 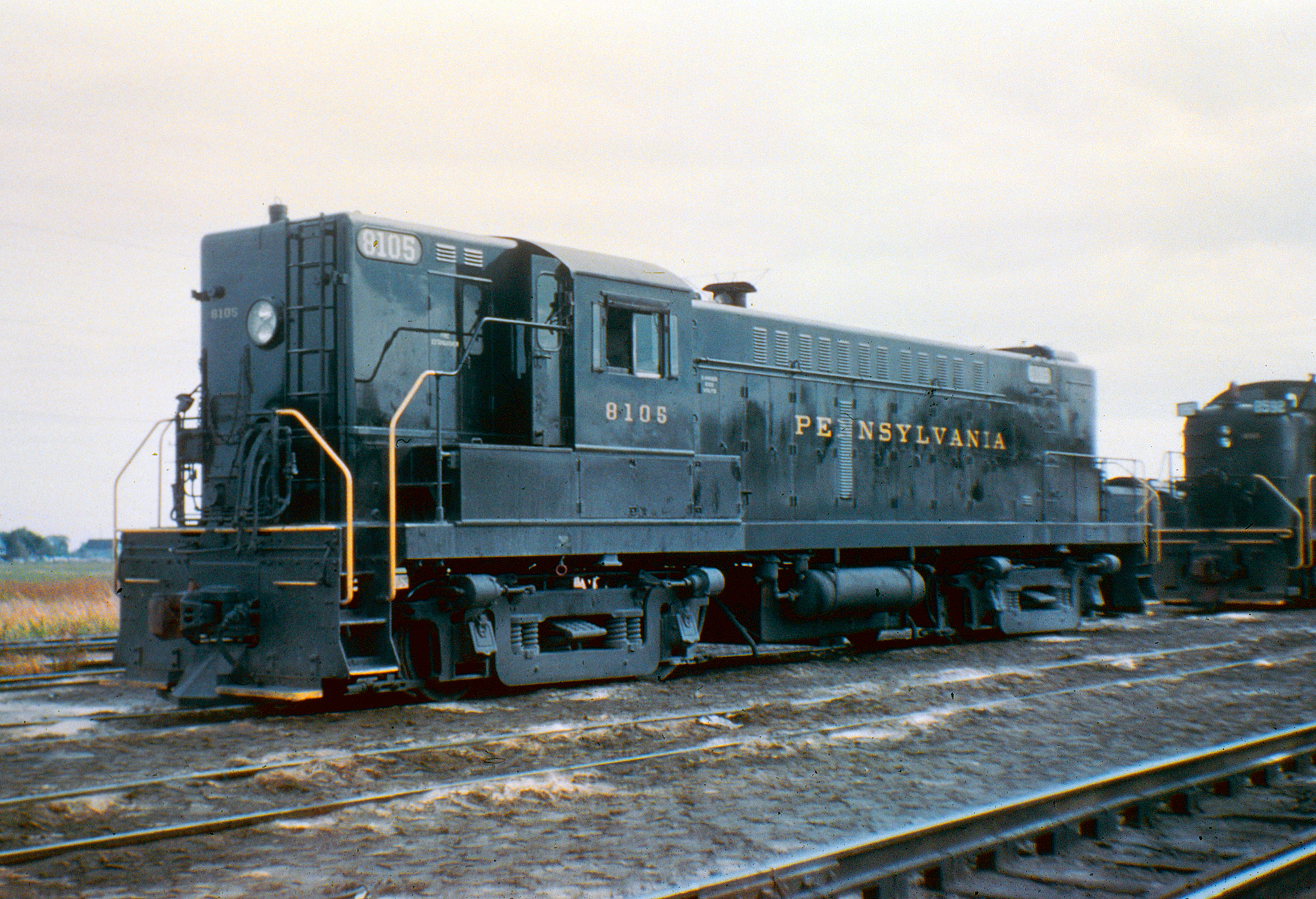 Pennsylvania RS12 #8105. Author's collection. This unit was part of a batch of six (#8105-8110) to initially feature the high, short hood. This group did not feature dynamic brakes. In his book, "The Diesel Builders: Volume Three (Baldwin Locomotives Works)," John Kirkland notes the following: "As a consequence of carbody design changes that were made beginning in 1953 on the 1,600 hp road switcher models...certain changes were also made to the model RS-12 production beginning in 1954 in order to permit using the same jigs and fixtures for all road switcher production insofar as was possible. To accomplish this objective, the underframes were lengthened from 58 feet to 58'6" over couplers, and the level of the short hood was raised nearly to the level of the cab roof. The long hood, however, was not raised..."

The RS12 began production in April of 1951 and utilized Baldwin's 608A prime mover, an upgraded version of a previous engine.  The locomotive featured a B-B truck setup (meaning there were two axles per truck) but no dynamic braking.

As with all of Baldwin's road switchers the RS12 used its standard carbody design; a short lead hood, offset cab, and trailing long hood. The look was actually quite pleasing with soft beveling and a flush roof line.

Overall, the RS12 was 58 feet in length and weighed in at a very light 133 tons (for a locomotive of its size). While rather long and light for its horsepower rating the locomotive included a starting tractive effort of 60,000 pounds and 32,000 pounds continuous. 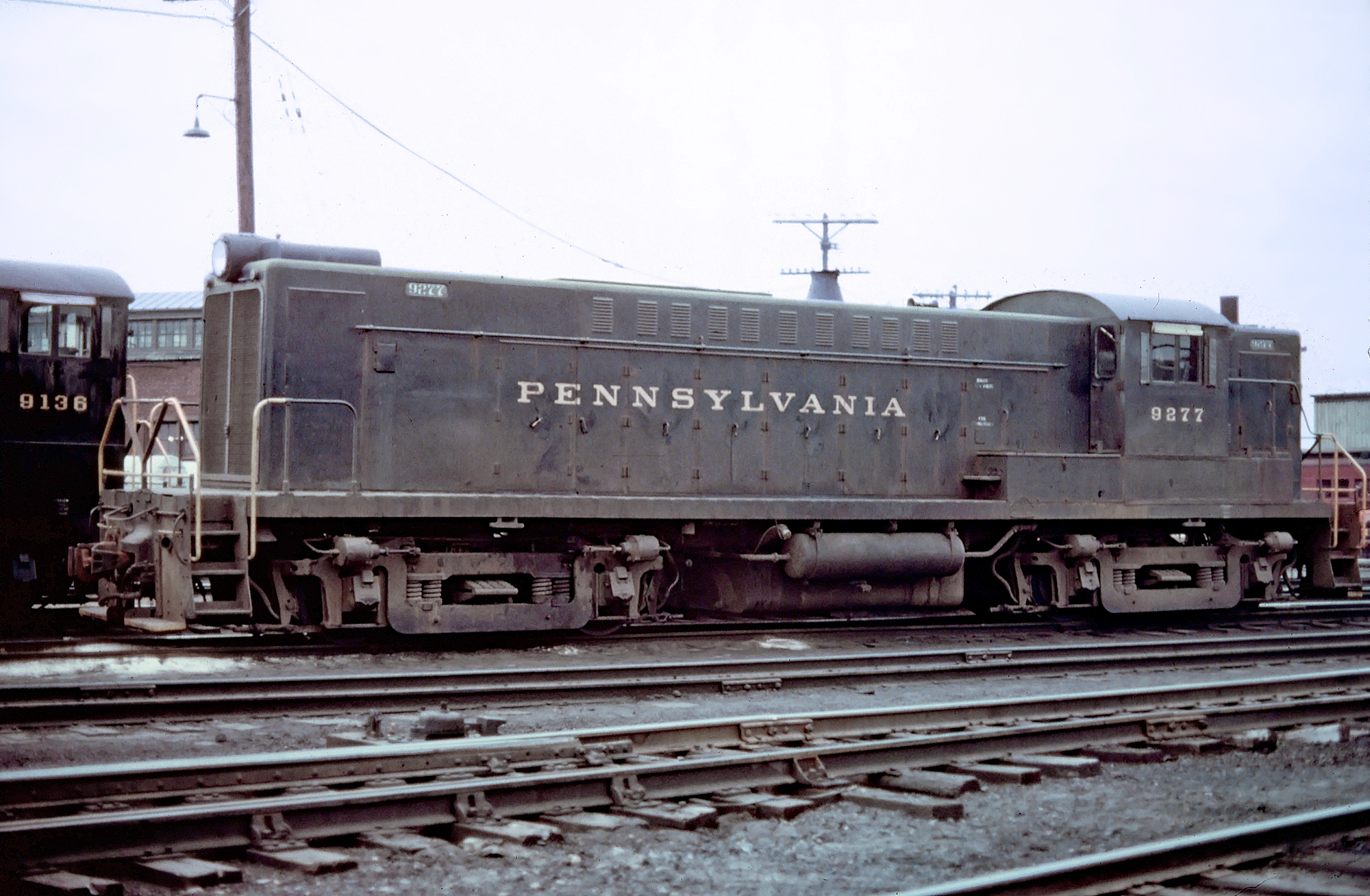 During the course of production there were several changes made to the RS-12, as is described in the following: 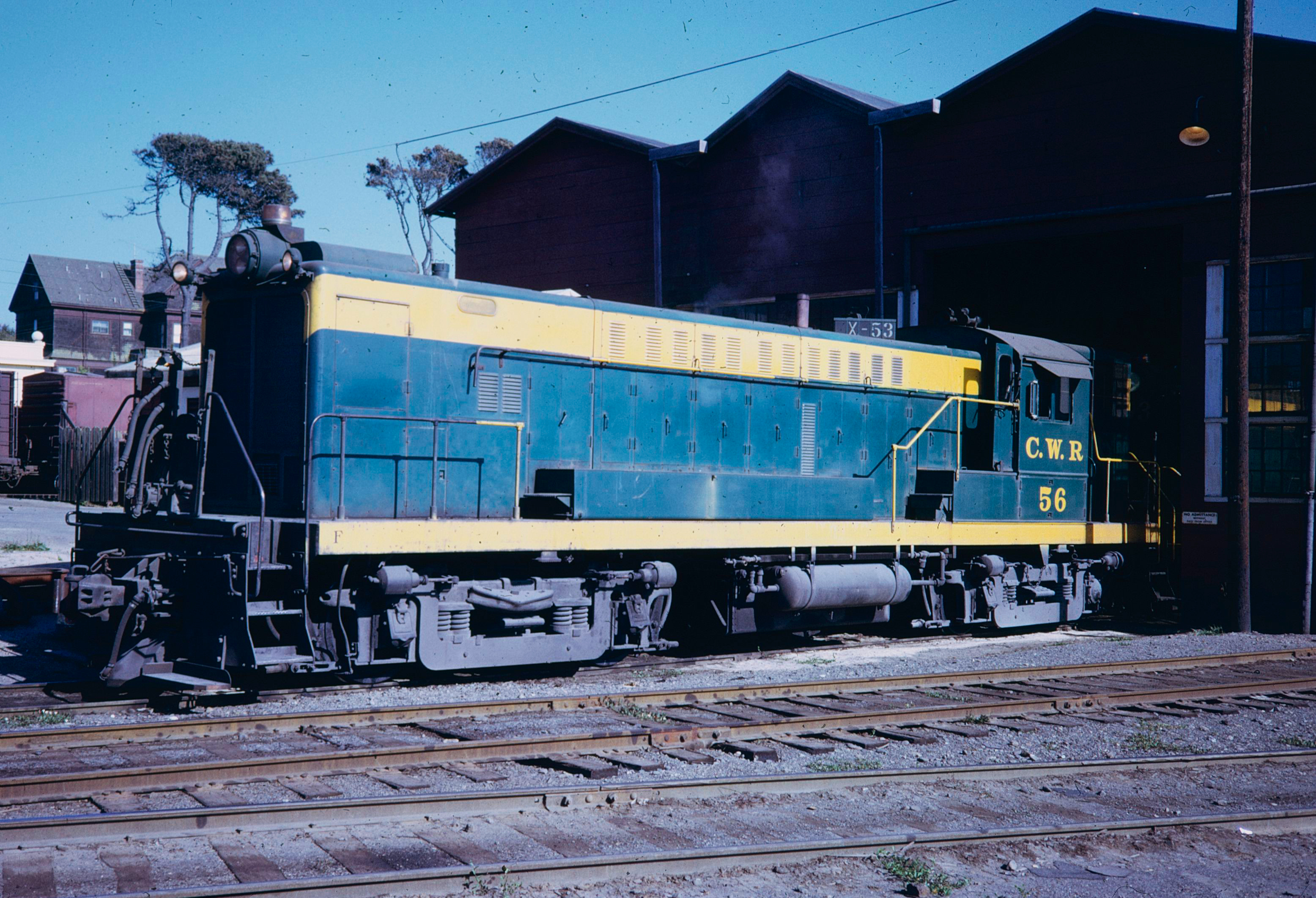 California Western RS12 #56 (built as McCloud River Railroad #33) lays over at the engine shop in Willits, California in May, 1973. Author's collection.

The New York Central would come to own the most, seventeen, which interestingly were supposed to be model LRS-1200s from Lima. However, due to the Lima-Baldwin merger NYC accepted the RS12 model instead.